Allow this roundup to serve as your inspiration for blending one of the iconic Eames furniture styles into your design. 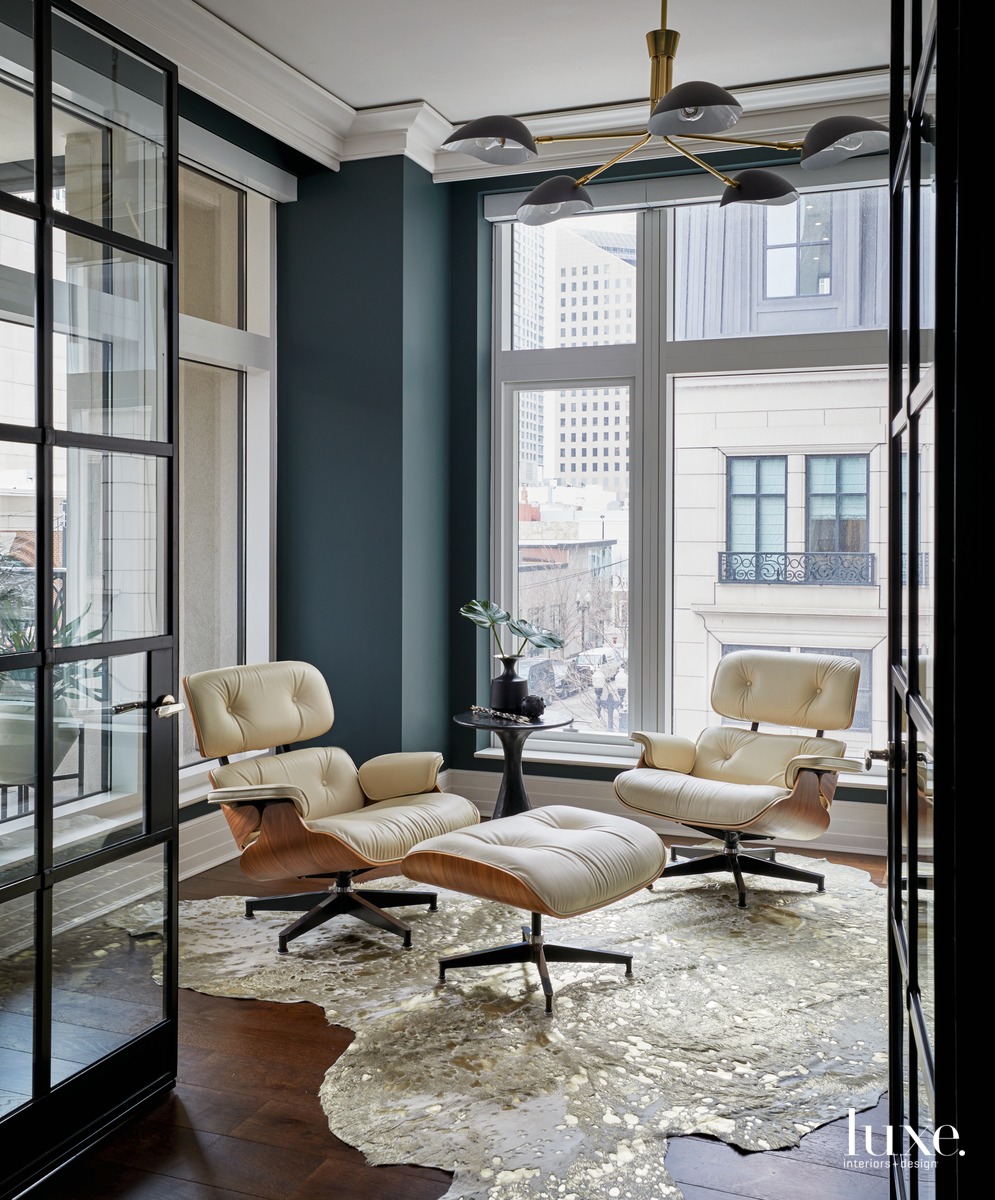 The client already owned an Eames Lounge Chair in ivory Vicenza leather, so designer Donna Mondi sourced a second one to hold court alongside it in the library. Keleen Leathers’ Color Splash rug in Blonde Bombshell grounds the space, and Mr. Brown’s Kasper side table in aged-graphite smooth gesso sits nearby. 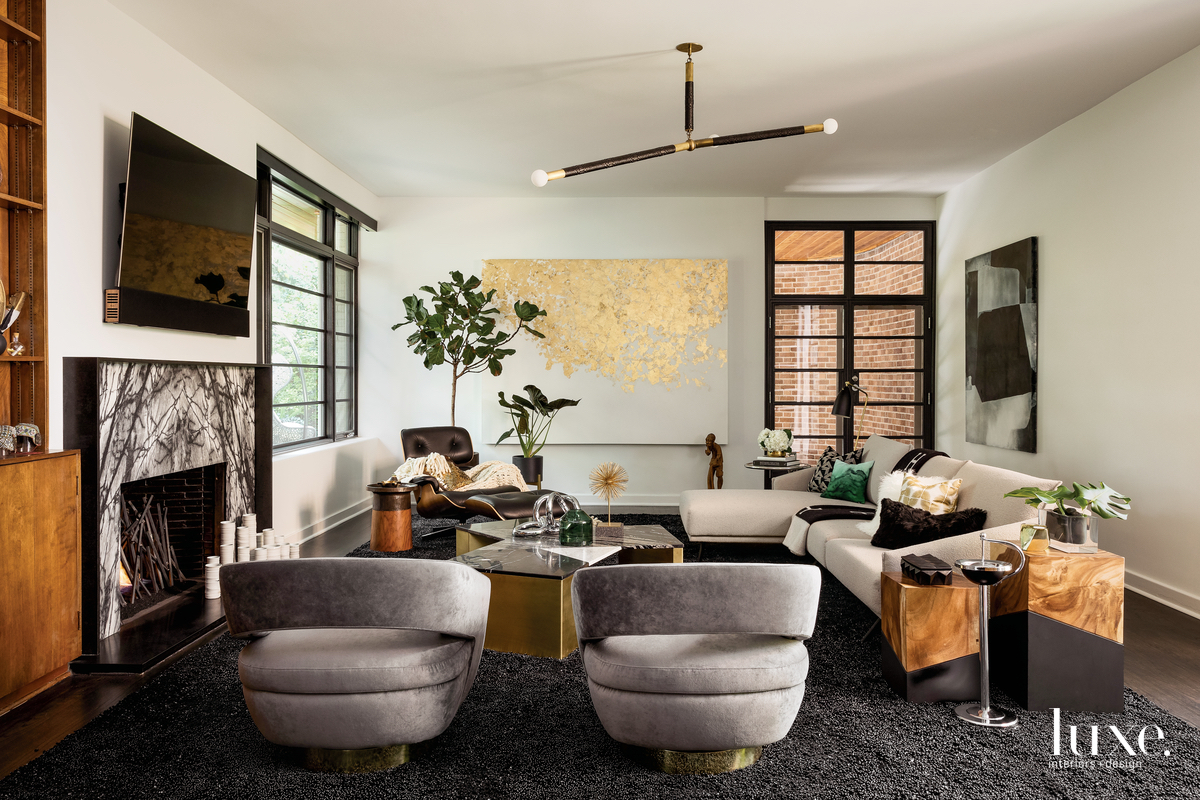 Designer Danielle Wallinger scoured local stone yards to find the dramatic soapstone that became the living room’s fireplace surround with visual ties to the coffee table. The Eames lounge chair near the window belonged to the homeowners, and the rug is from Design Source II. Above the setting is an Arrow light fixture by Apparatus Studio, while the walls feature a gold-leaf painting by Terri McClatchie and a black, gray and white artwork by Eric Blum. 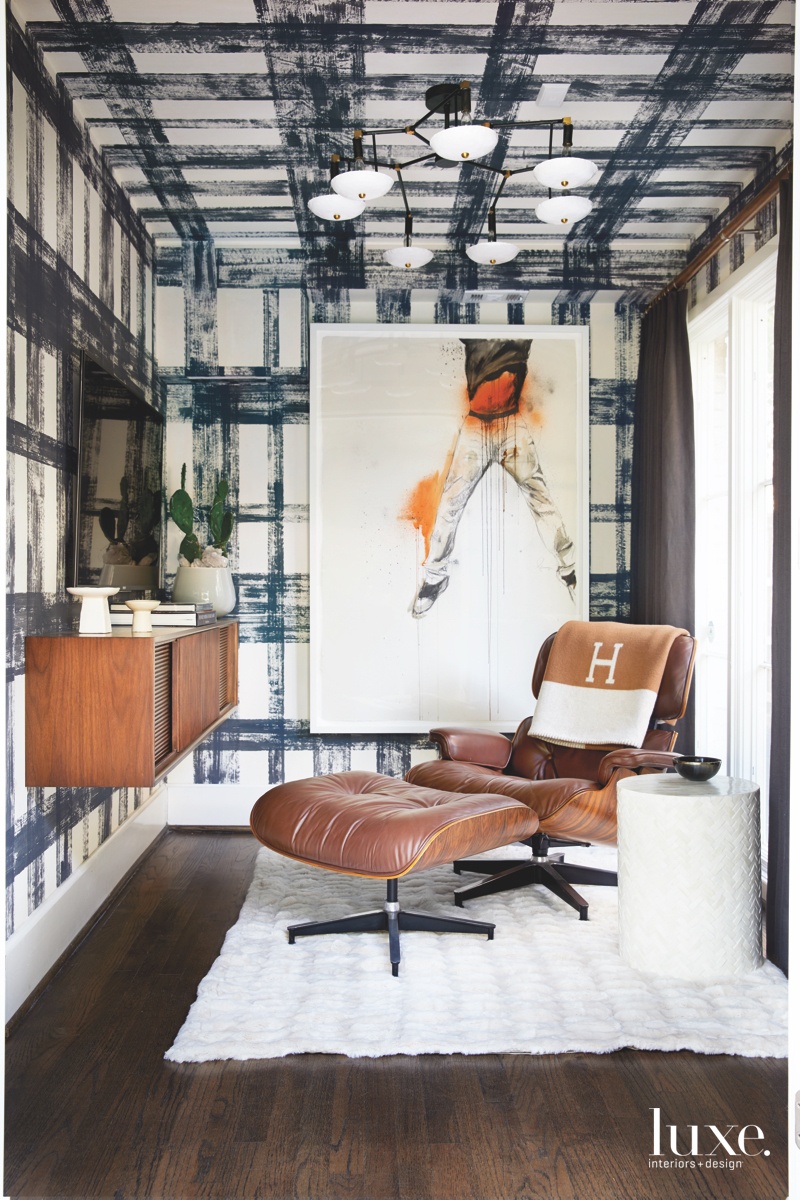 The paneling in the billiards room hides a secret entry into this sitting room, where designer Tracy Hardenburg’s sons escape to play video games or watch movies. The Porter Teleo wallpaper is from David Sutherland; the vintage Eames chair and ottoman are from 20cdesign. Art by Fahamu Pecou is from Conduit Gallery. 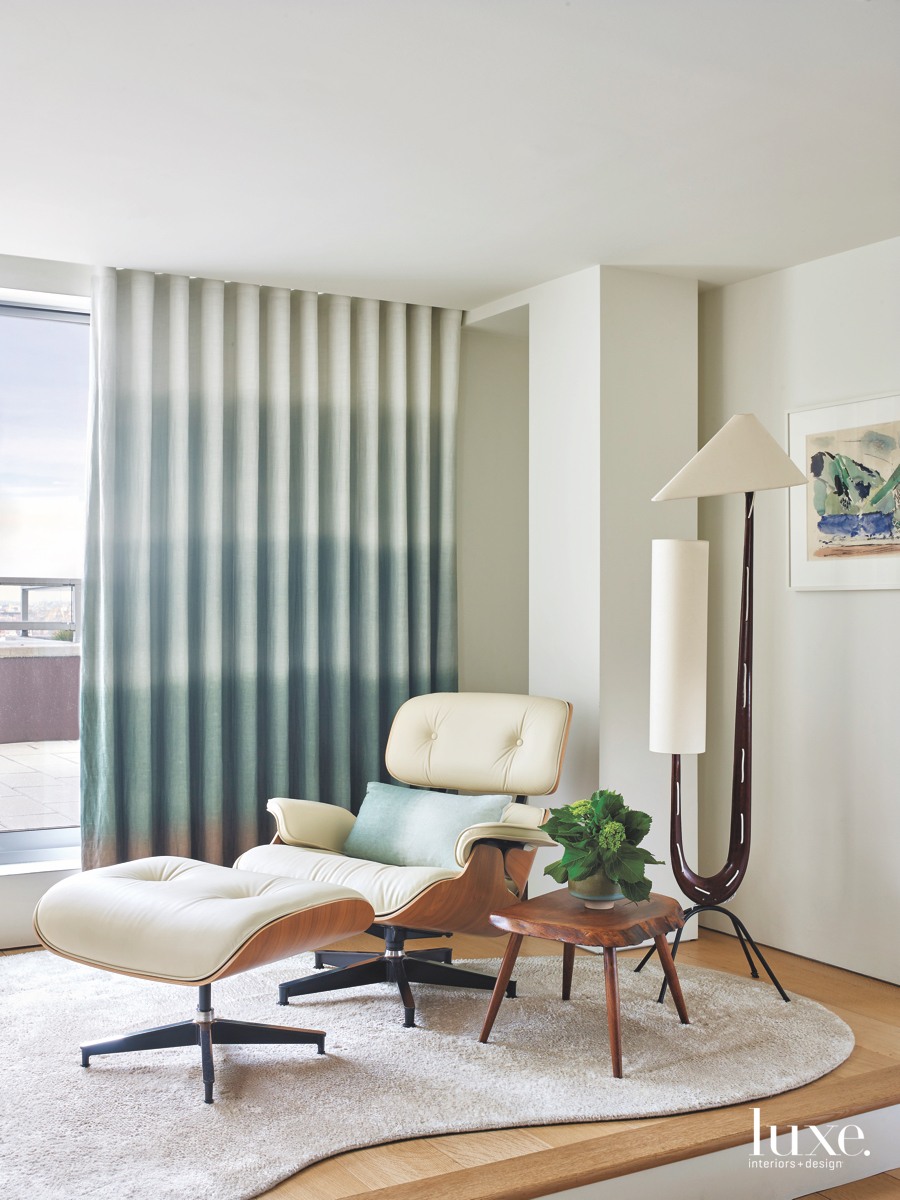 An Eames lounge chair and ottoman rest in the bedroom nook alongside draperies by Erik Bruce Fabrik using hand-dyed Aquata fabric by Carolyn Ray. The floor lamp is by Jean Rispal, and the live-edge accent table is by George Nakashima. 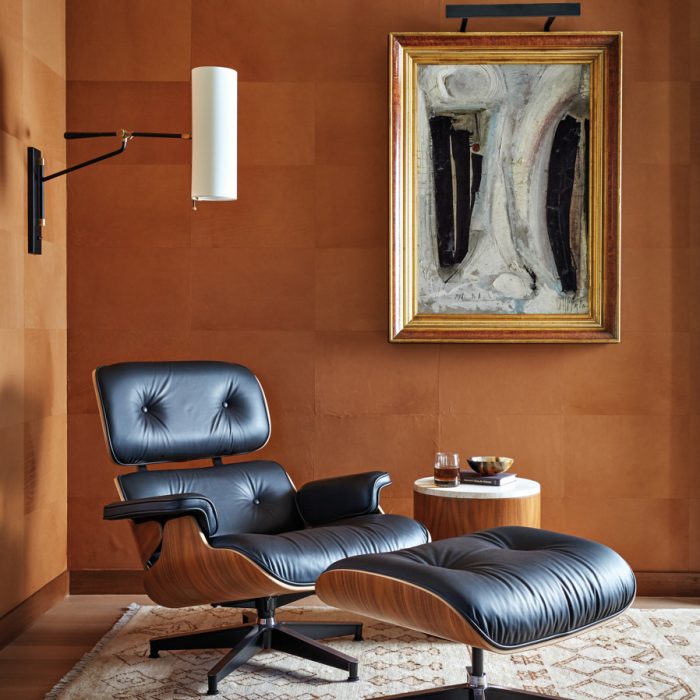 “I conceived the study as a grown-up getaway,” says designer Kimberly Knight. She layered texture with browns and blacks using a leather Ashbury Hides wallcovering, an Eames lounge chair and ottoman, and a Graham Harmon painting. The result is a classic masculine space within which a glass of whiskey is meant to be enjoyed. 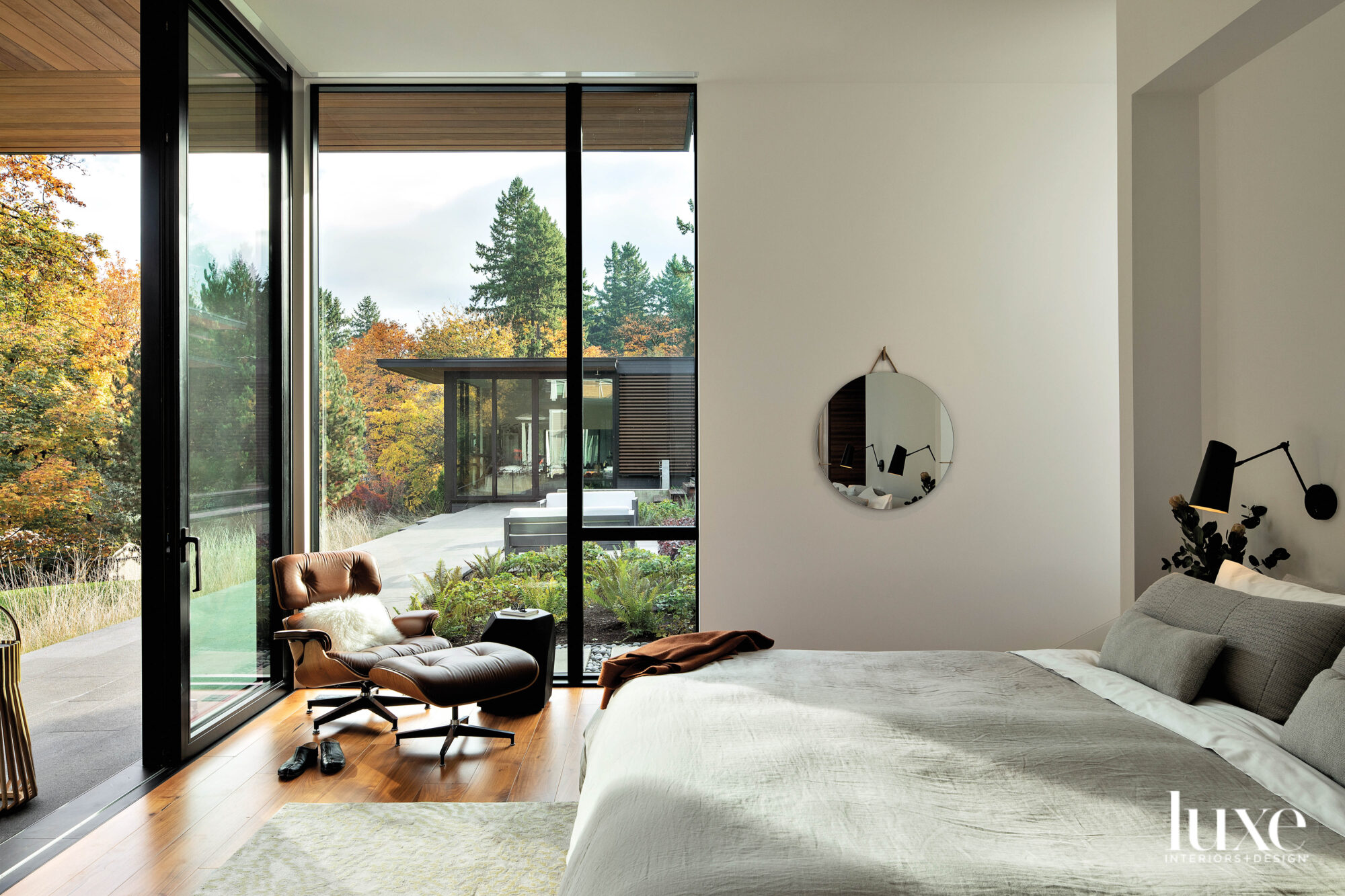 In contrast to the generously scaled public spaces, the main bedroom’s scale feels intimate. The designers used the clients’ existing carpet, which rests on vernal American walnut flooring by Duchateau, and Eames chair and ottoman. Linens by Matteo dress the Flexform bed. 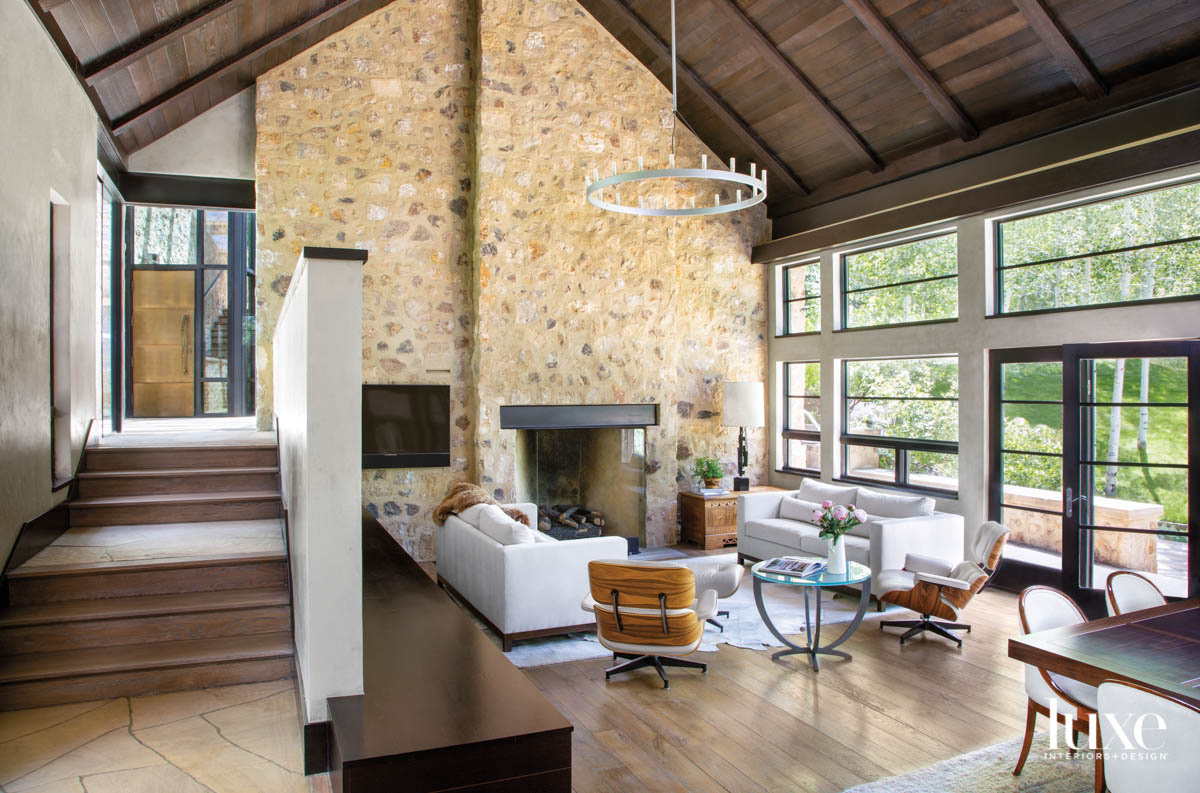 The original open living room features dramatic soaring ceilings and mudded stonework. A striking circular chandelier by Fontana Arte draws the eye up, while a pair of sofas customized by designer Erika Dowe Fitzgerald and two Eames chairs are arranged to encourage conversation. 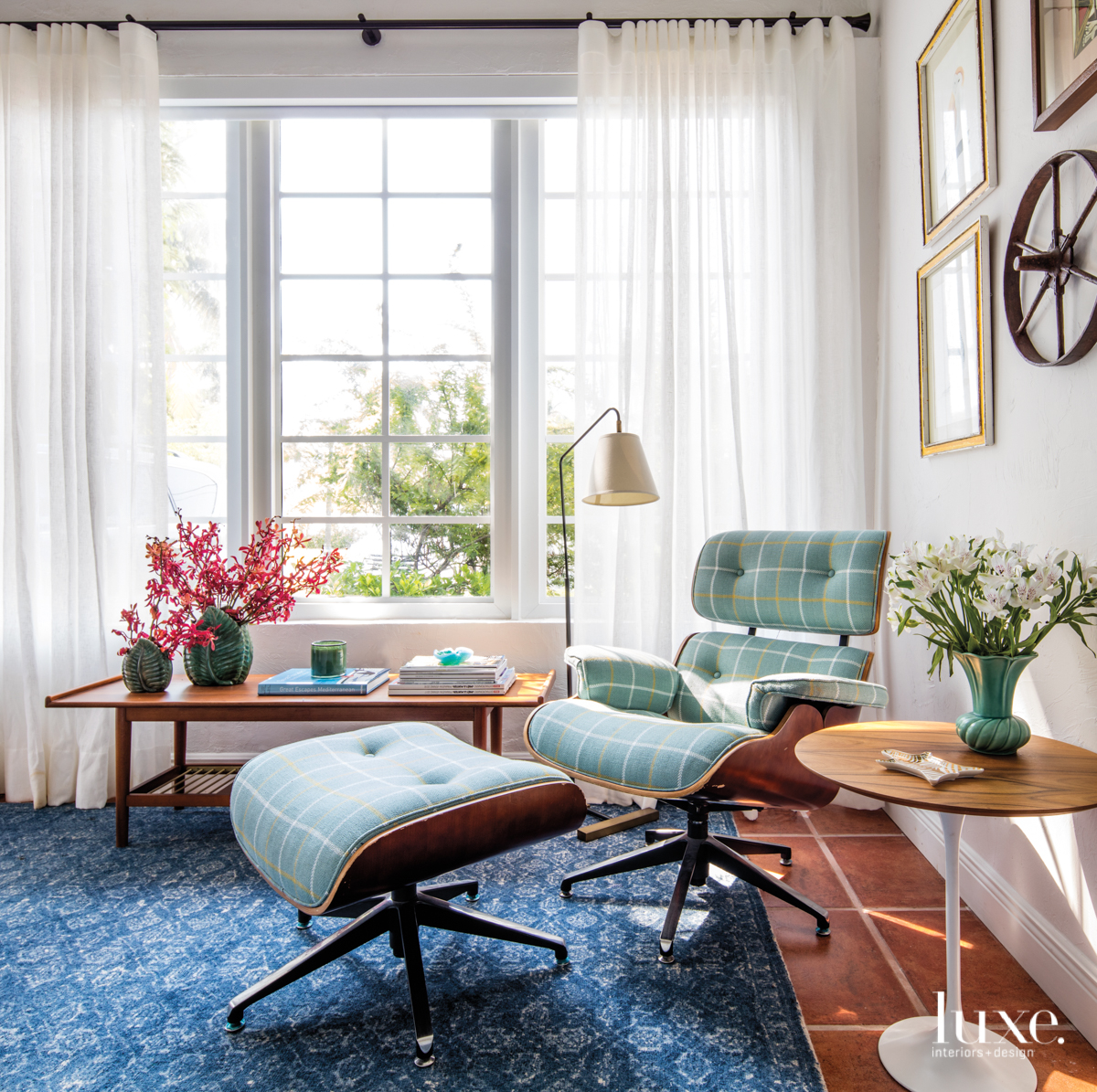 Saliba reupholstered an Eames lounge chair and ottoman in a light blue plaid fabric from Wall Boutique for a sitting room called the saleta, where the client enjoys reading. The Pottery Barn rug covers the home’s original Mexican-tile flooring. Next to the chair is a Saarinen side table; the table beneath the window is from Anthropologie. 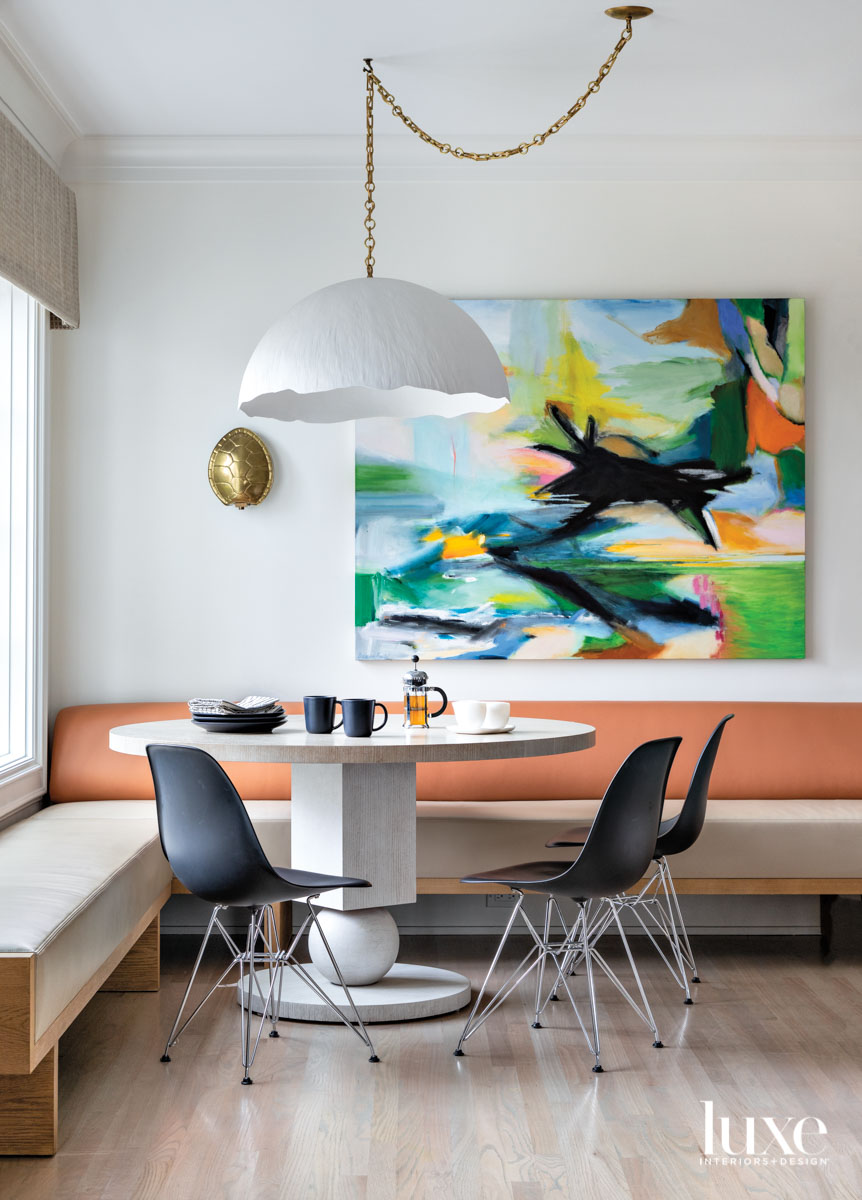 A custom banquette fabricated by Neal & Company makes the breakfast nook a family hub with the help of Maharam vinyl upholstery and fiberglass Eames chairs around Century’s Vienna Hague dining table. An abstract by Alex Frankel and a Bradley pendant light complete the vignette. 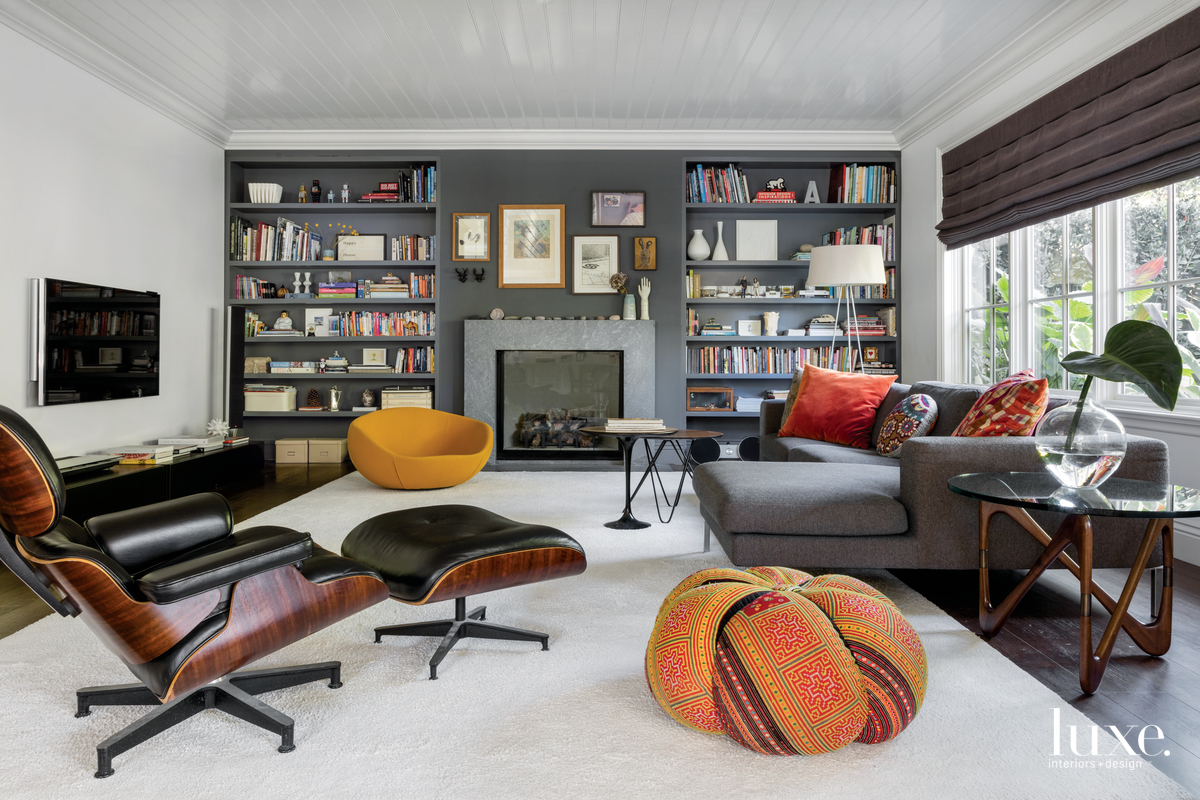 Designer Ana Kozak worked with general contractor Wayne Moss of Wayne Moss Constructors on the family room’s built-ins, which now hold collections of books and meaningful items. She brought the Eames lounge chair and ottoman with her from Brazil. An Eero Aarnio lounge chair and a West Elm ottoman add vivid color to the space. 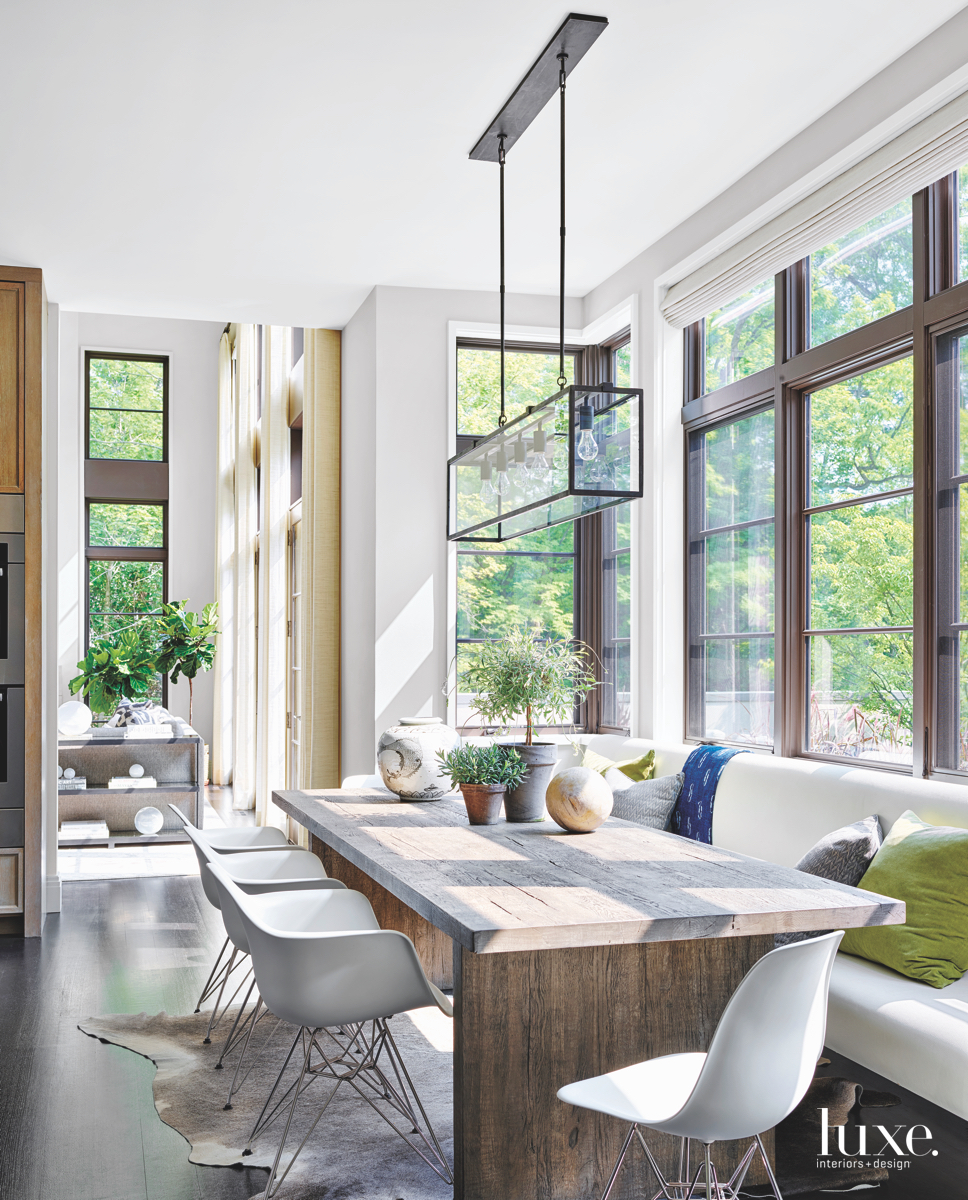 To allow for dining for as many as 12 people, designer Andrea Goldman conceived a 15-foot-long upholstered banquette, which she paired with a reclaimed-oak-plank table from RH and white molded-plastic Eames chairs with a wire base from Design Within Reach. 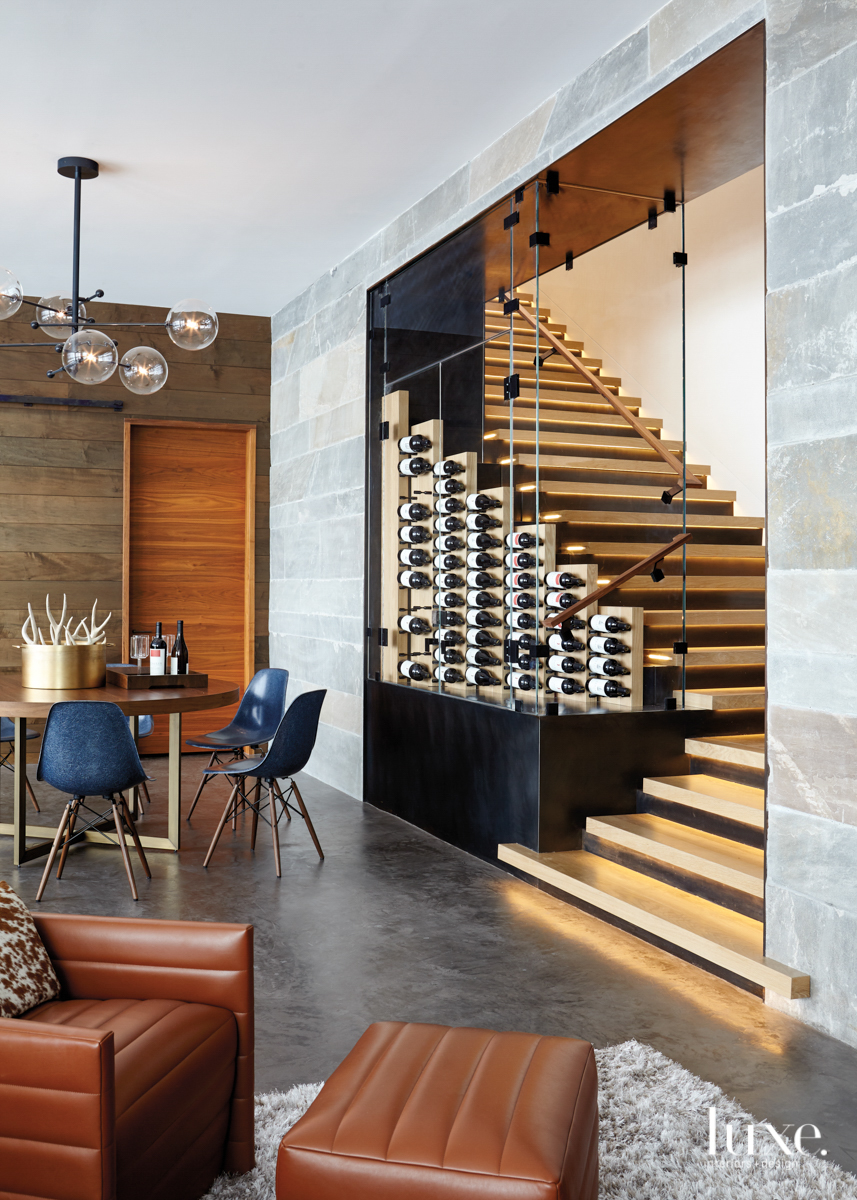 A glass wine cellar houses the clients’ collection in the downstairs recreation area, where a Desiron table is surrounded by Eames chairs and illuminated by an RH chandelier. The chair and ottoman in Edelman leather are by The Bright Group. 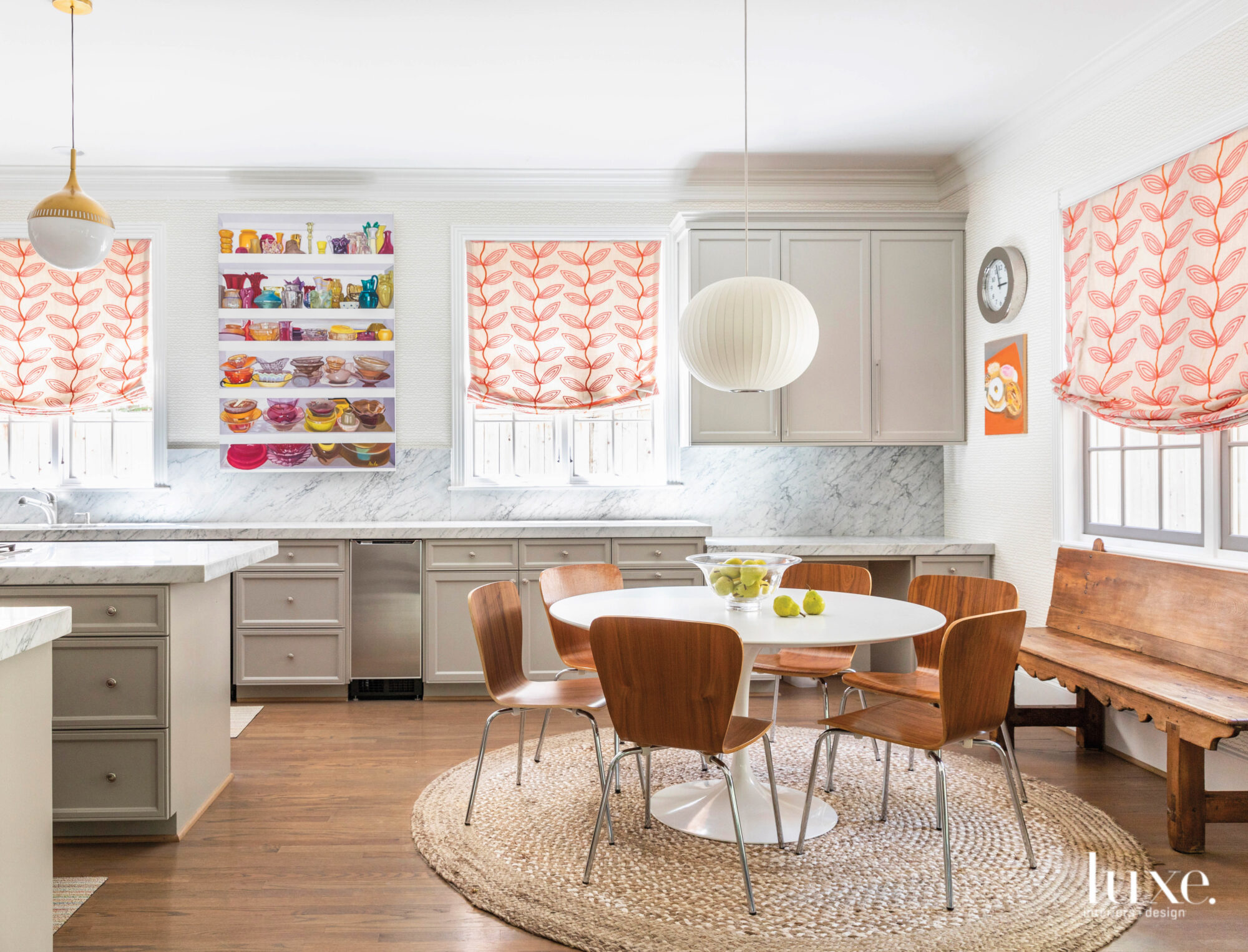 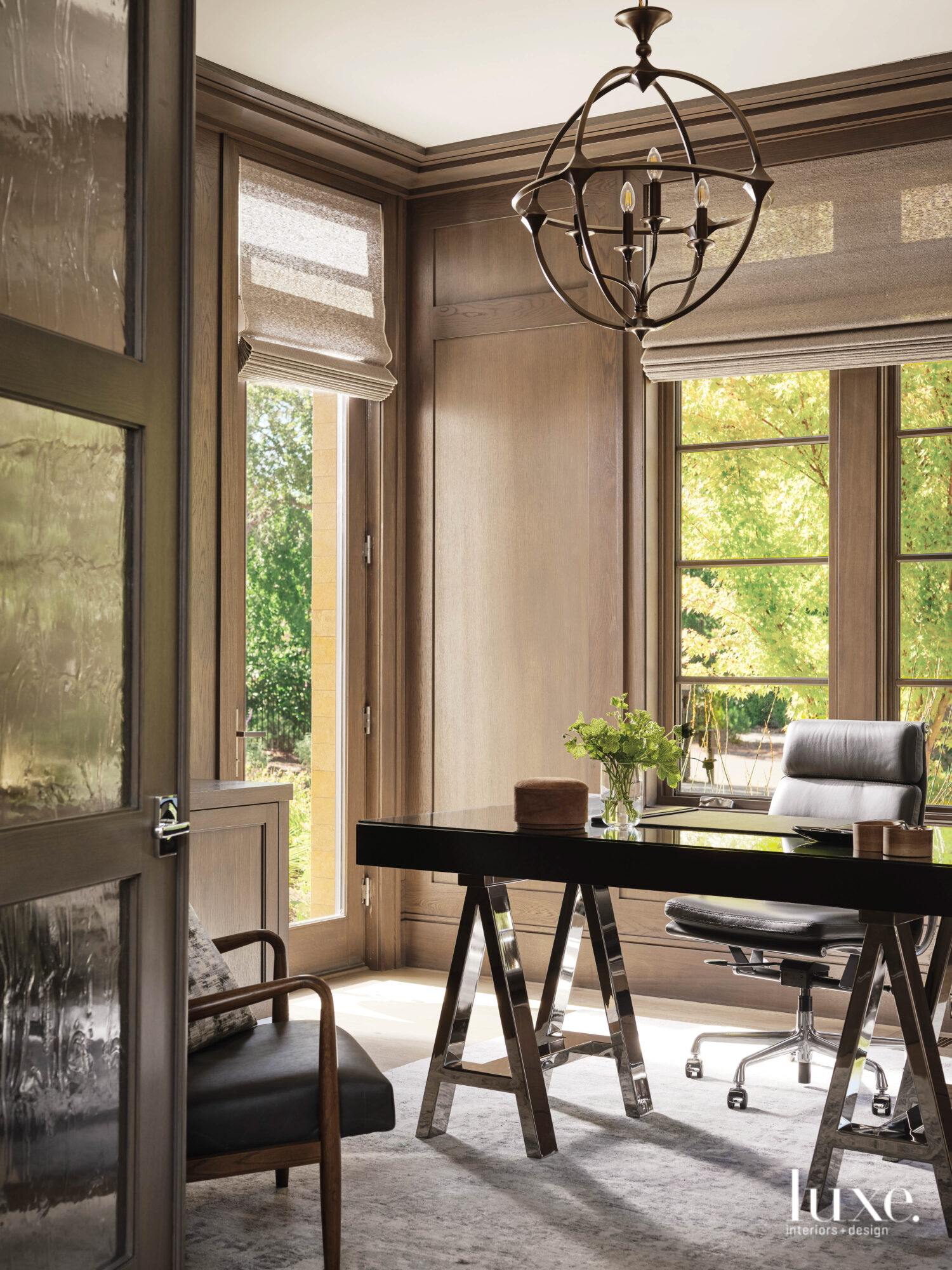 Central to the main rooms in the house, the office is wrapped with wood paneling, which delivers warmth to the light-filled space. Designer Linda Sullivan married a classic Eames chair with a modern chrome desk by Williams-Sonoma Home. The Bellario Orb chandelier by Currey & Company punctuates the space. 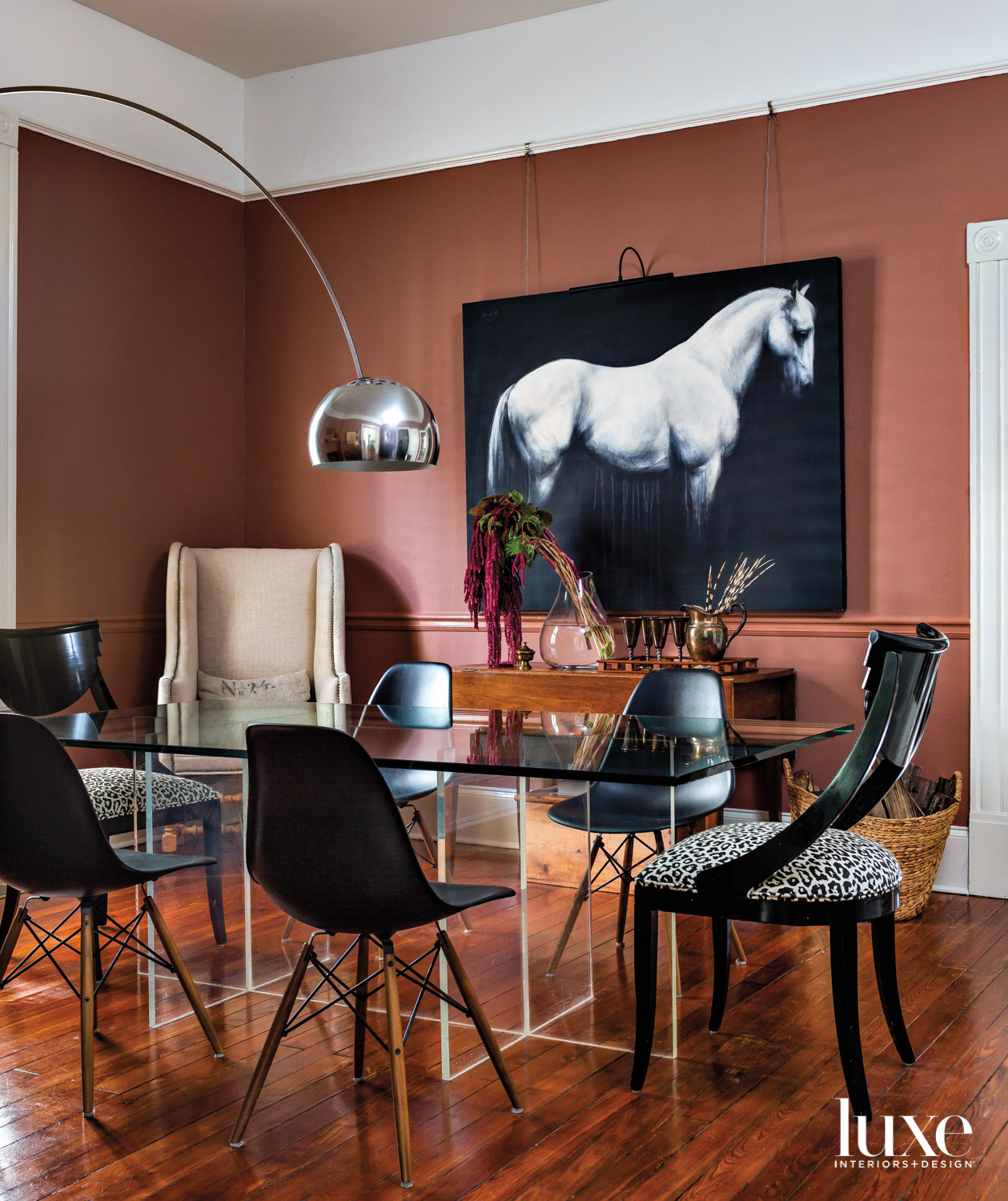 TOUR THE HOME
A version of this article was originally published on October 9, 2017. 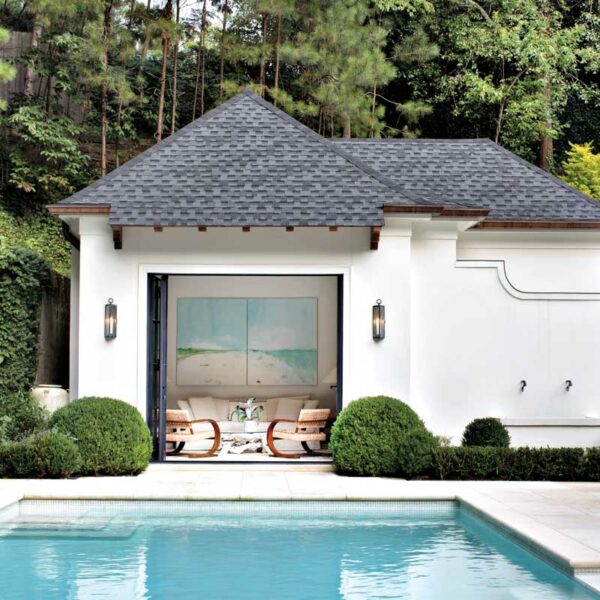 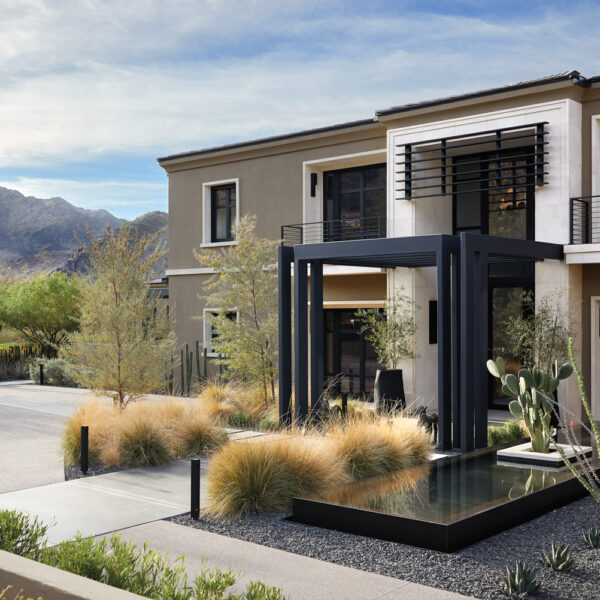 21 House Landscaping Ideas To Bring You Closer To Nature 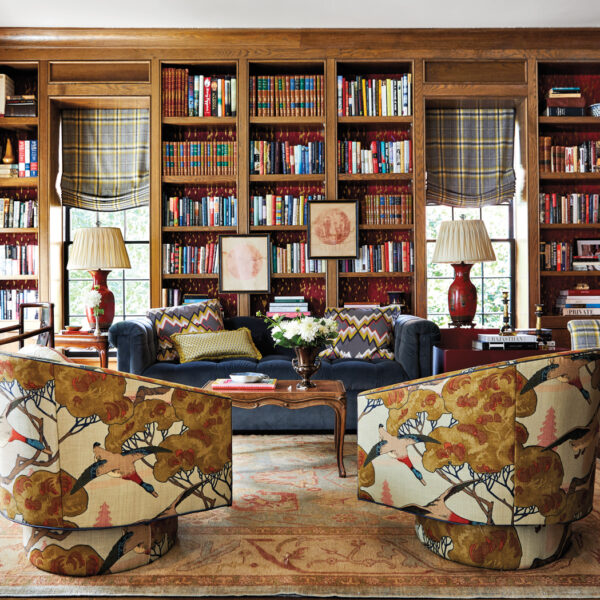 4 Home Libraries Made For More Than Just Reading 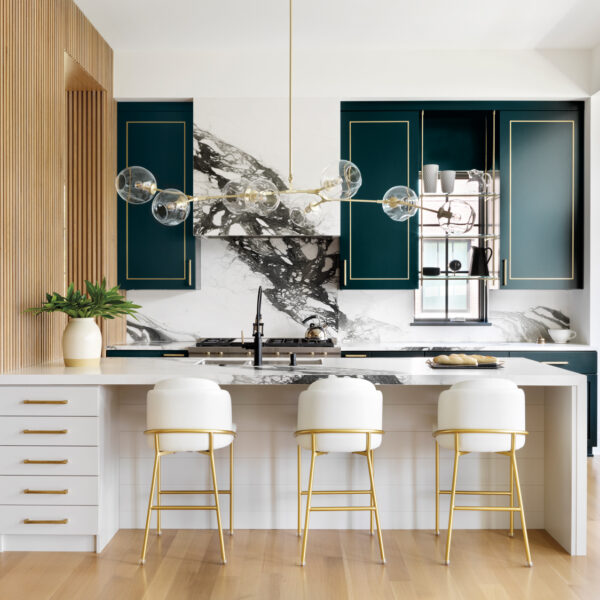 10 Bold Kitchen Cabinets That Make A Case For Color 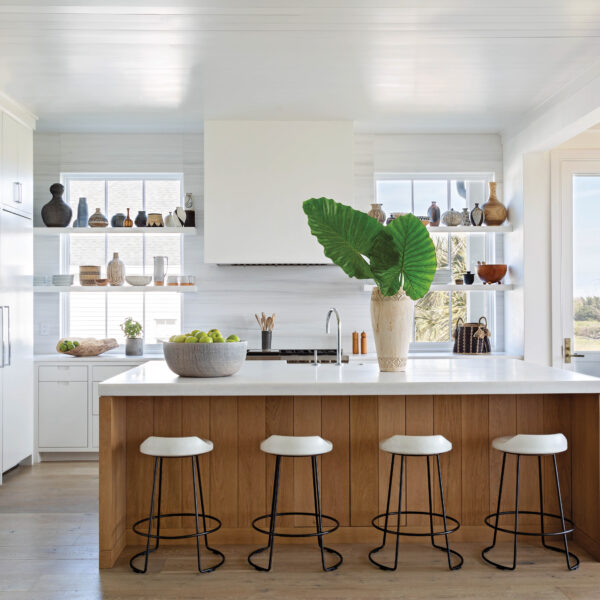