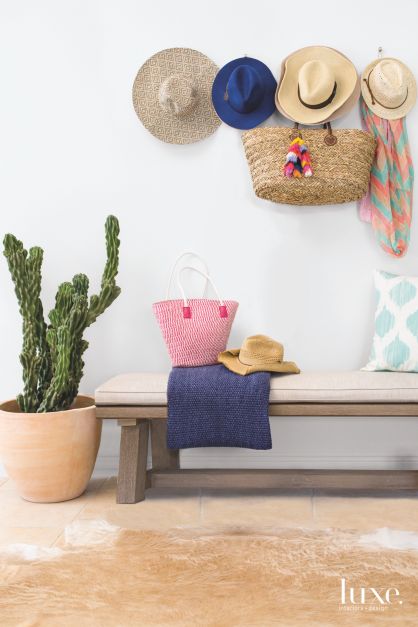 The entry area doubles as a mudroom and a place to hang hats and discard shoes. The bench from Sunpan in Toronto is topped with a cushion wearing linen from RH and an ikat pillow by Surya. A Brazilian cowhide rug from Pure Rugs in Los Angeles adds a touch of whimsy and warms the original porcelain tile floor laid in a grid pattern. 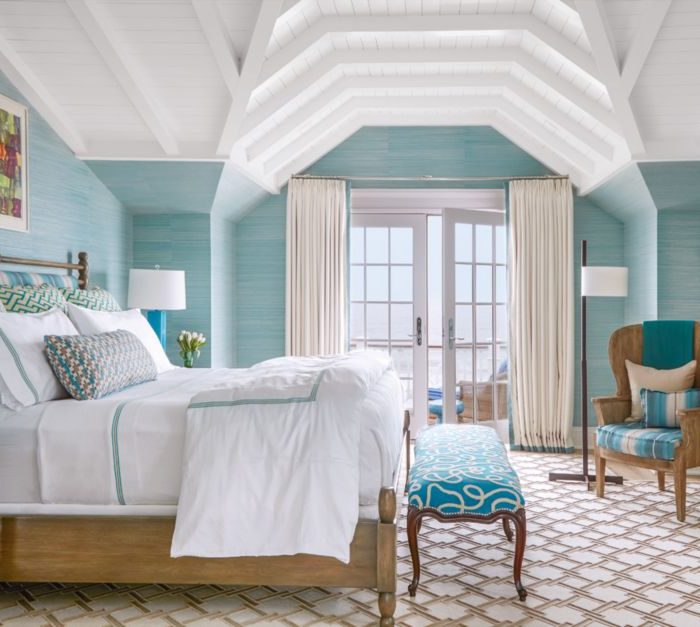 In the master bedroom, nightstands by David Iatesta flank the bed, which is dressed in custom white linens with turquoise and tan details by Cristina Azario. The turquoise stripe on the barrel chair is from Osborne & Little, and the breezy woven draperies are made of Rumba fabric from Romo, trimmed in seafoam slub tape from Lee Jofa. 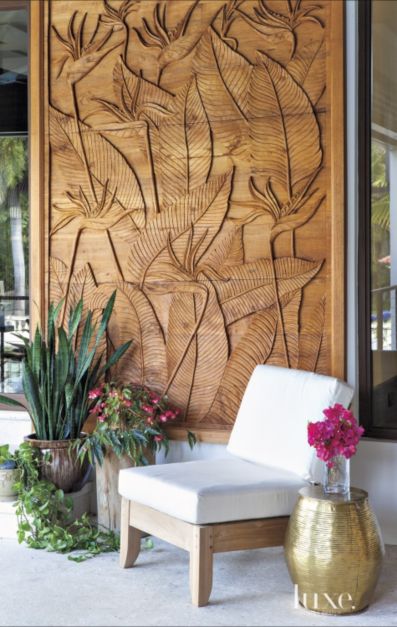 To conceal a water heater on the main-level terrace, the couple commissioned a handcrafted teak wall panel from Nongnit’s Treasures in Thailand that depicts the husband’s grandmother’s favorite flower: the bird-of-paradise. The chair, from Holly Hunt, faces the pool on the deck below. 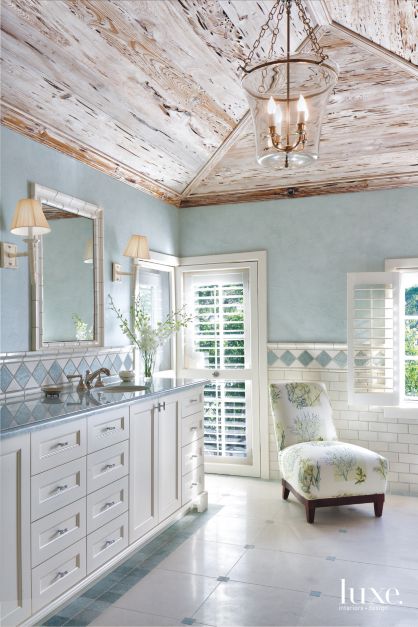 Builder Tim Givens opened up the ceilings in this Palm Beach master bathroom, giving them their arresting cathedral shape and cladding them in limed pecky cypress. It’s a beautiful treatment that adds character and gives visual lightness to the space, which is further complemented by shellstone floors, creamy subway tile wainscoting and a pale blue-and-white palette chosen by designer Allison Paladino. 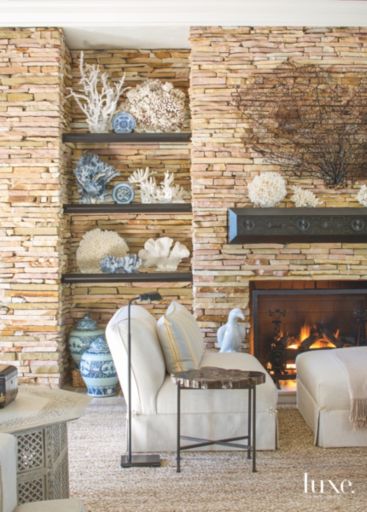 The home’s interior flavor is evident at the entry, where designer Joseph Minton placed antique blue-and-white porcelain temple jars and bowls, as well as a piece of blue coral. The Serena rustic chandelier is from Brendan Bass in Dallas and is made of natural Capiz shells, and the intricately carved front door is original to the home. 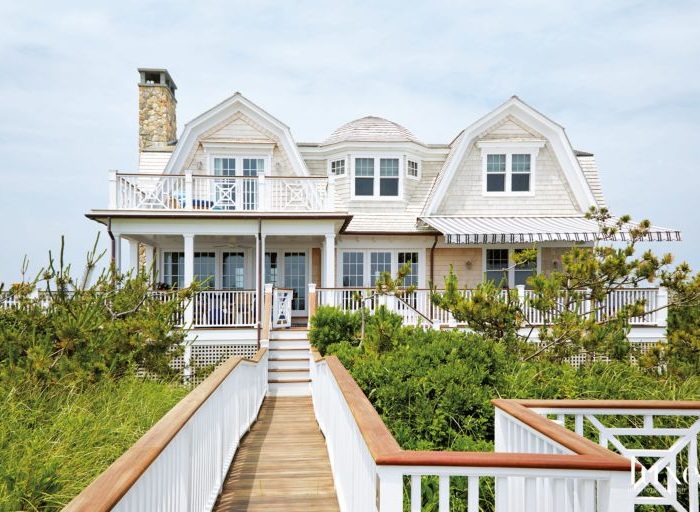 To take advantage of the waterfront location, porches, terraces and paths that lead from the home to the beach were added, and on the bay side is a new pool and pool house. Despite the new elements, though, there was a focus on maintaining the beach cottage theme. 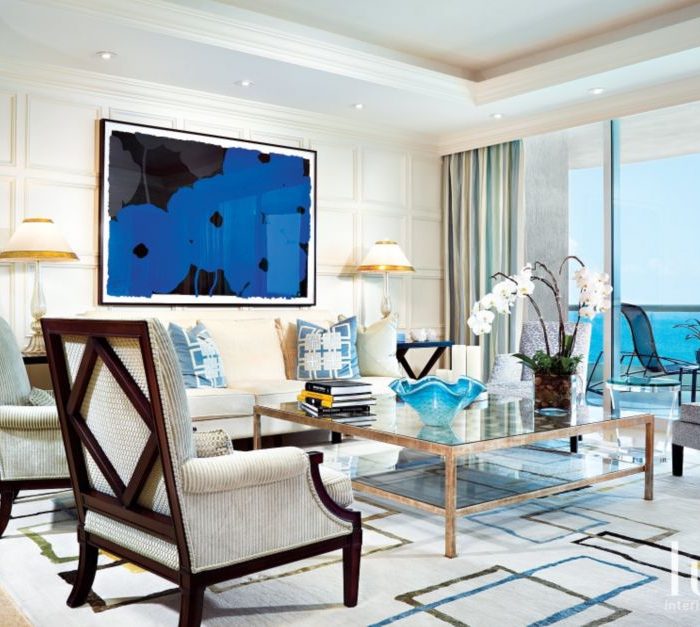 In the living room, two pairs of armchairs–one set pale blue, the other tan and cream–reference sea and sand, while a white sofa allows for Poppies–a bold blue contemporary framed silk screen by Donald Sultan–suspended behind it to make a stunning impact. A wall of windows permits light and the views of the ocean to flood in. 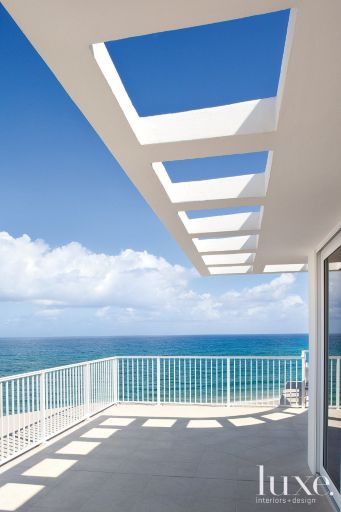 When a New York couple who had been renting a winter escape in Palm Beach ultimately decided to buy a place there, they settled on a penthouse condo right on the water. Their new getaway had one of the best vantage points in the area. 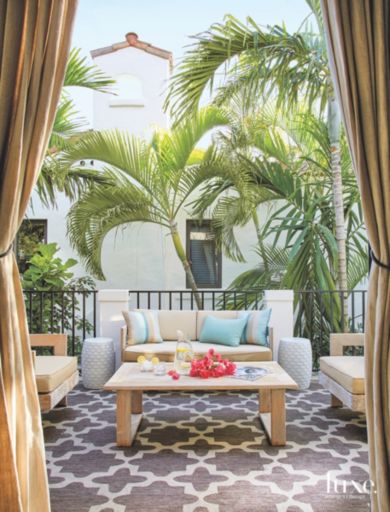 A patio was added to enhance the connection to the outdoors. “When the landscape lights are turned on in the evening, it looks like fairies live in the garden,” the owner says. “It is so beautiful.” 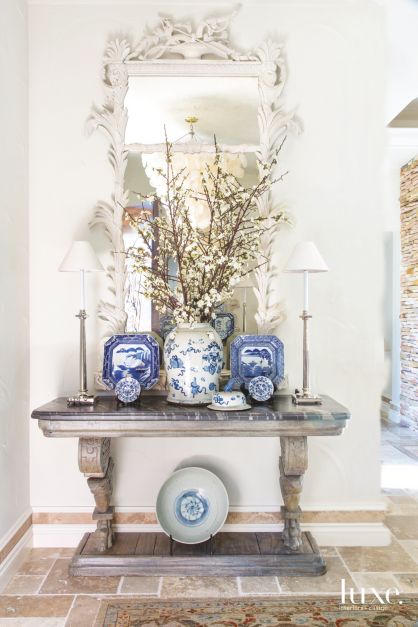 Inspired by the colors of the sky and ocean, a designer creates gracious interiors in harmony with nature. 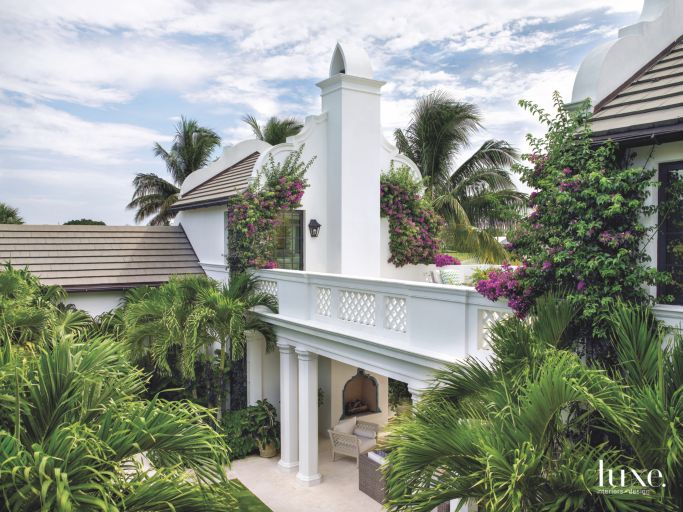 The loggia, tucked below the bridge/patio area, is open on two sides with views of the pool in one direction and the golf course in the other. Concrete tiles distinguish the rooftops from the white stucco walls; classical Italian detail is added with the curved chimney cap. 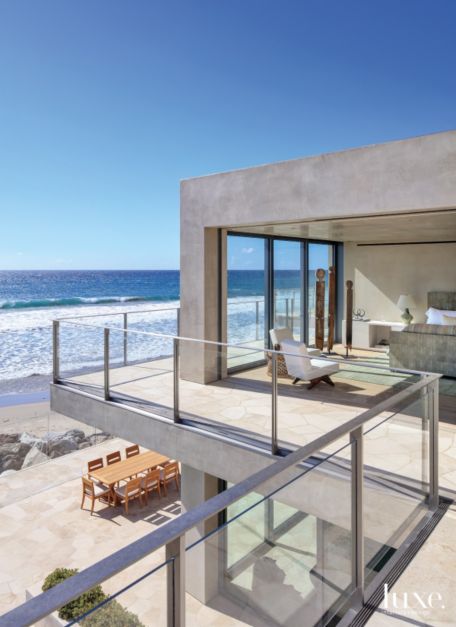 The nearly all-steel framing allowed the architect to create entire walls of glass that nonetheless meet strict earthquake codes. The resulting glass doors lift and stack along each end of every facade, offering access to the outdoors, erasing boundaries between inside and out. 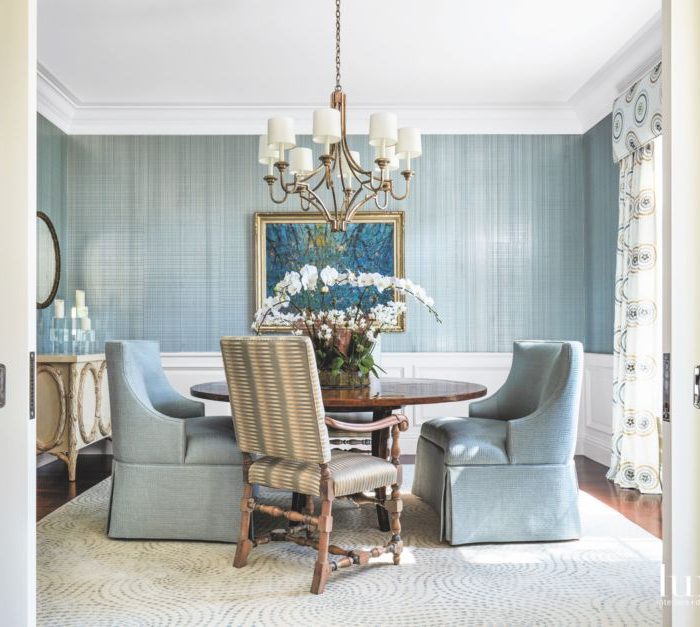 The formal dining room includes a Bausman & Company table, a Niermann Weeks chandelier, and chairs wearing Kravet Couture fabric. Phillip Jeffries’ wallcovering from Holly Hunt backs a painting by Bruno Zupan. Draperies are by leejofa.com, the rug is from J. Namnoun Oriental Rug Gallery in Connecticut, and the cabinet is by Michael Taylor Designs. An orchid from Floral Emporium brings the outside in. 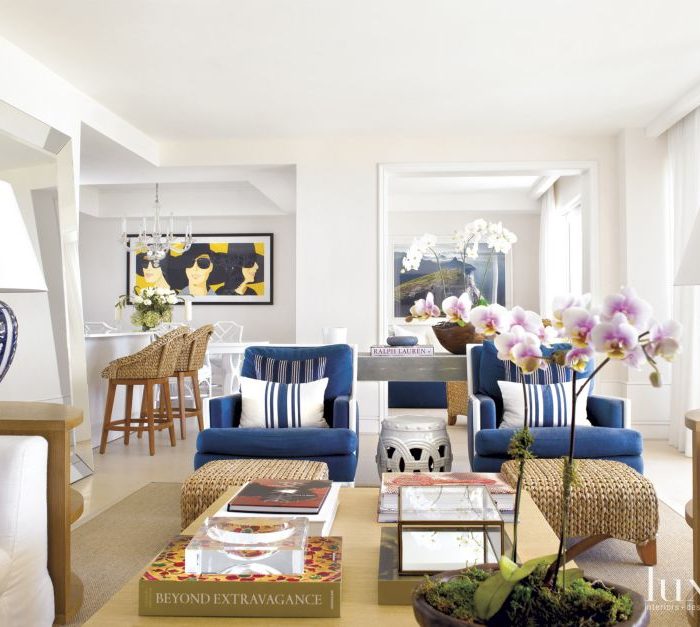 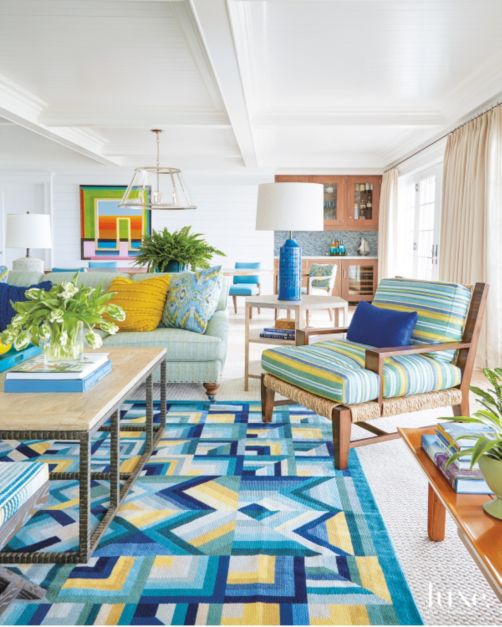 The living room’s sisal rug from Stark is topped with a kaleidoscopic one from Vermilion Rugs; a Formations table with an iron base, from Holly Hunt, grounds the setting. 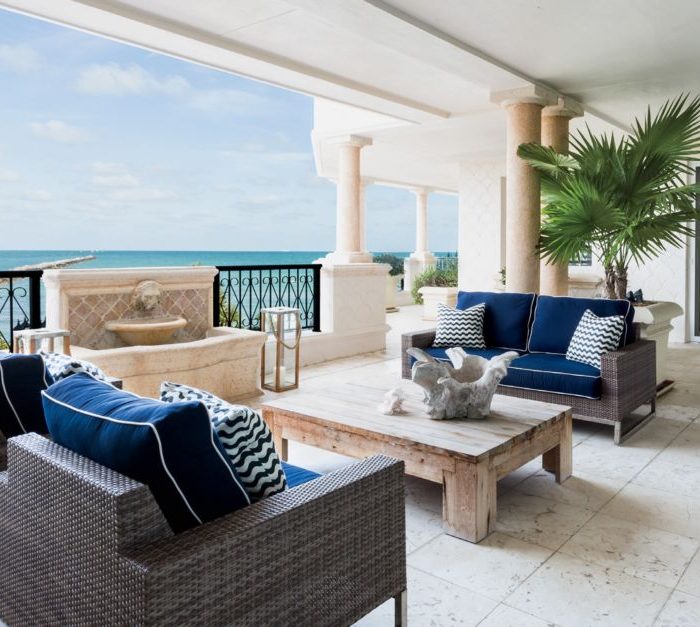 Shades of sea and sky offer a vacation from formality in this casually dressed Fisher Island retreat designer with family and friends in mind. 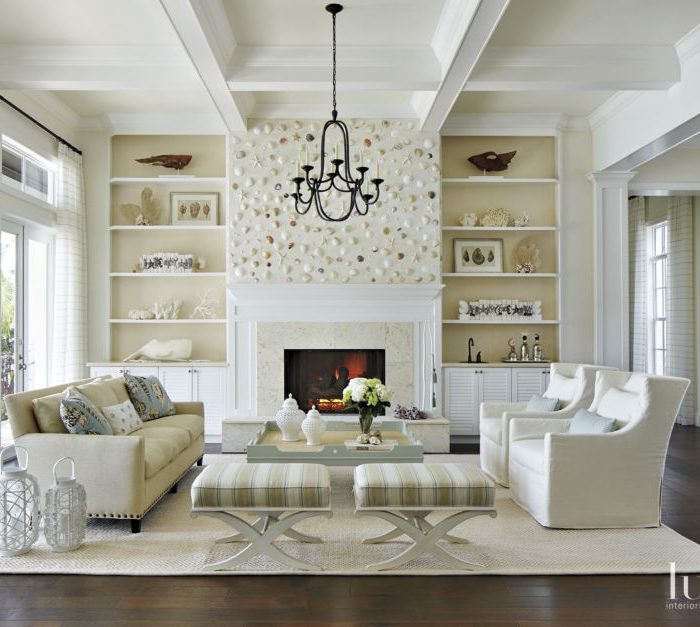 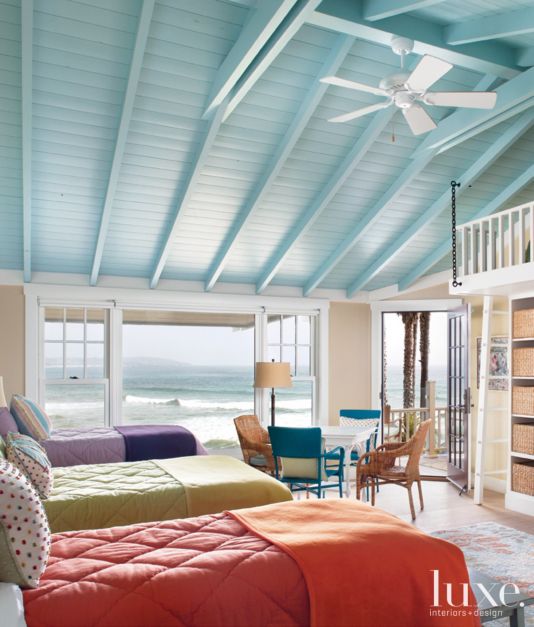 The second-story rooms, including the bunkroom, have European oak floors from DuChateau Floors. A light blue ceiling lends a relaxed feel to the room, which can sleep seven, thanks to a custom upper bunk bed designed by Sherwood. The colorful bedding is from Calico. 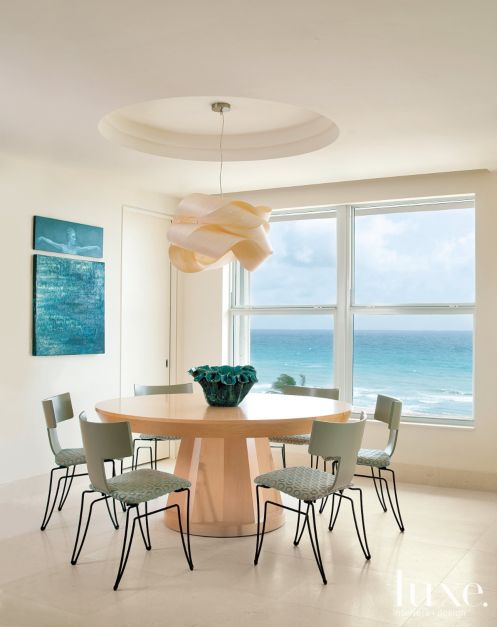 A ceiling recess adds depth to the dining area and delineates it from the kitchen, giving way to a Jolo Enterprises pendant, a maple dining table from Eric Brand in Burlingame, California, and Anziano chairs from Donghia wearing Cowtan & Tout fabric. Windows were replaced with ones from Innovative Window Concepts. 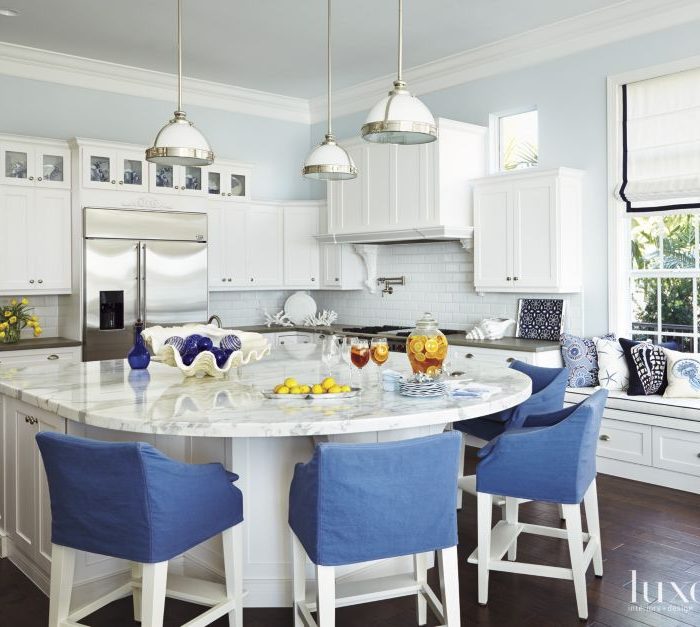