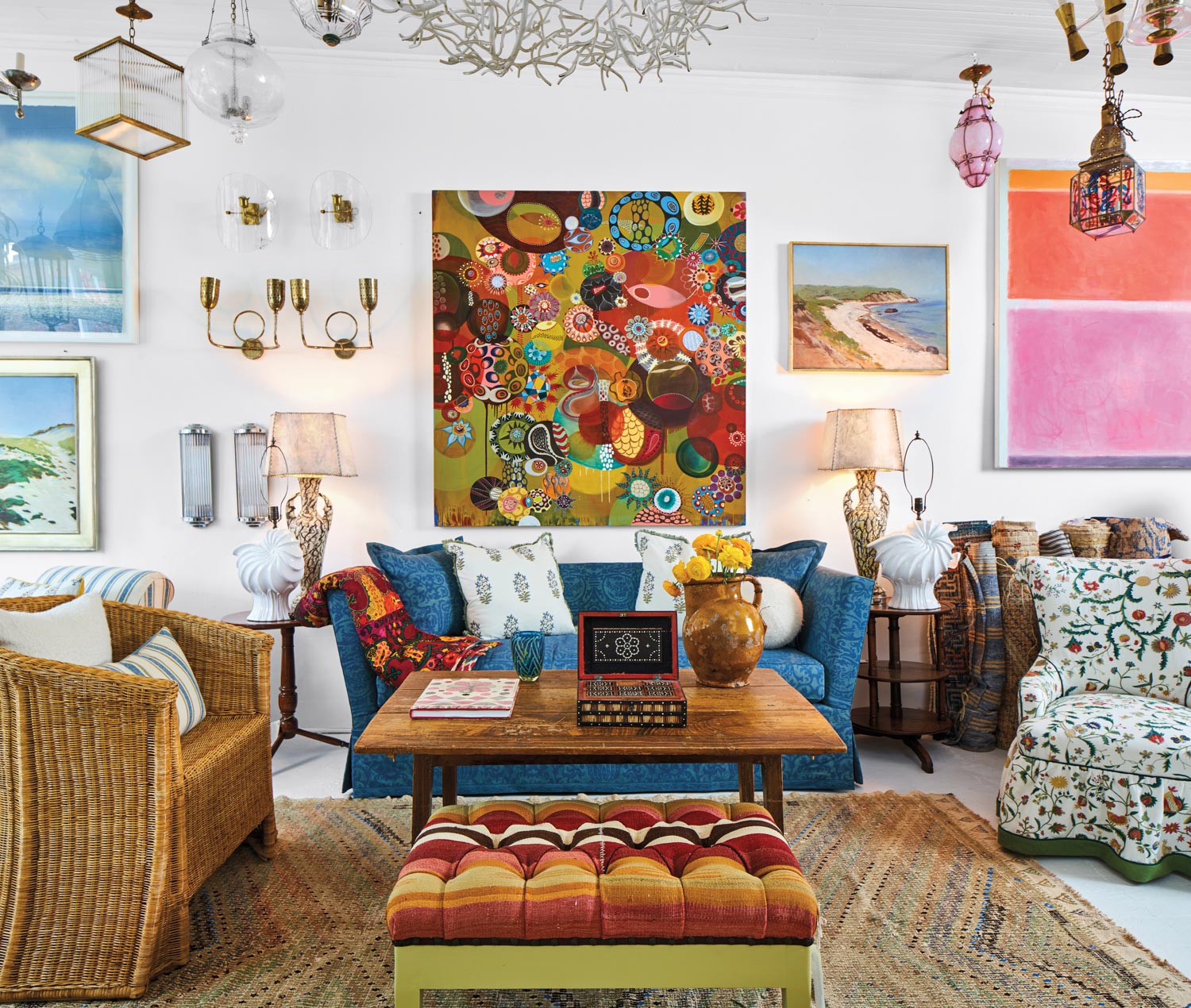 “Shops are great stages for personal dreaming,” says Katie Leede of the inspiration behind her namesake store in Sag Harbor. “I’ve always wanted to have my own shop because I’ve benefited from so many great ones. And not just because you find inspiring things, but because they’re a real nexus for community.”

A handwritten “for-rent” sign tacked to the window of the former Ruby Beets offered a divine nudge for Leede to take the leap, and the result is a sunny floorthrough layered with color, pattern and perspective. There are vintage furnishings and new upholstered pieces in kicky prints. There are overscale Italian lamps and shades made of Indian saris. There’s local artwork, contemporary dinnerware and libraries of Leede’s own fabric and wallpaper designs. And who could miss the carpets (which number in the tens of thousands between the shop, a storage unit in the Springs and her widespread network of vendors), ranging from midcentury Scandinavian flat weaves to Indian palace dhurries. There’s “a conversation here between old and new that’s fresh, fun and easy to live with,” says Leede. “Nothing is perfect, but it’s colorful and comfortable.” It’s a mix that harmonizes with her approach to residential design, where “highly personalized, cozy homes that reflect individual style” are always the goal.

As the Hamptons tiptoes into gathering again, the shop hopes to host book signings, artist meet-and-greets and fashion pop-ups in its garden, harking back to Leede’s belief in shop-as-connector. It’s the same thread that tethers her to a favorite branch of the business: “I think I was a Bedouin in the last life,” she says. “I love rolling out carpets and talking to people about their homes— there’s something about that exchange of human energy. I feel very connected to the culture of these pieces; to these amazing, hardworking people all over the world; to this slipstream of history. 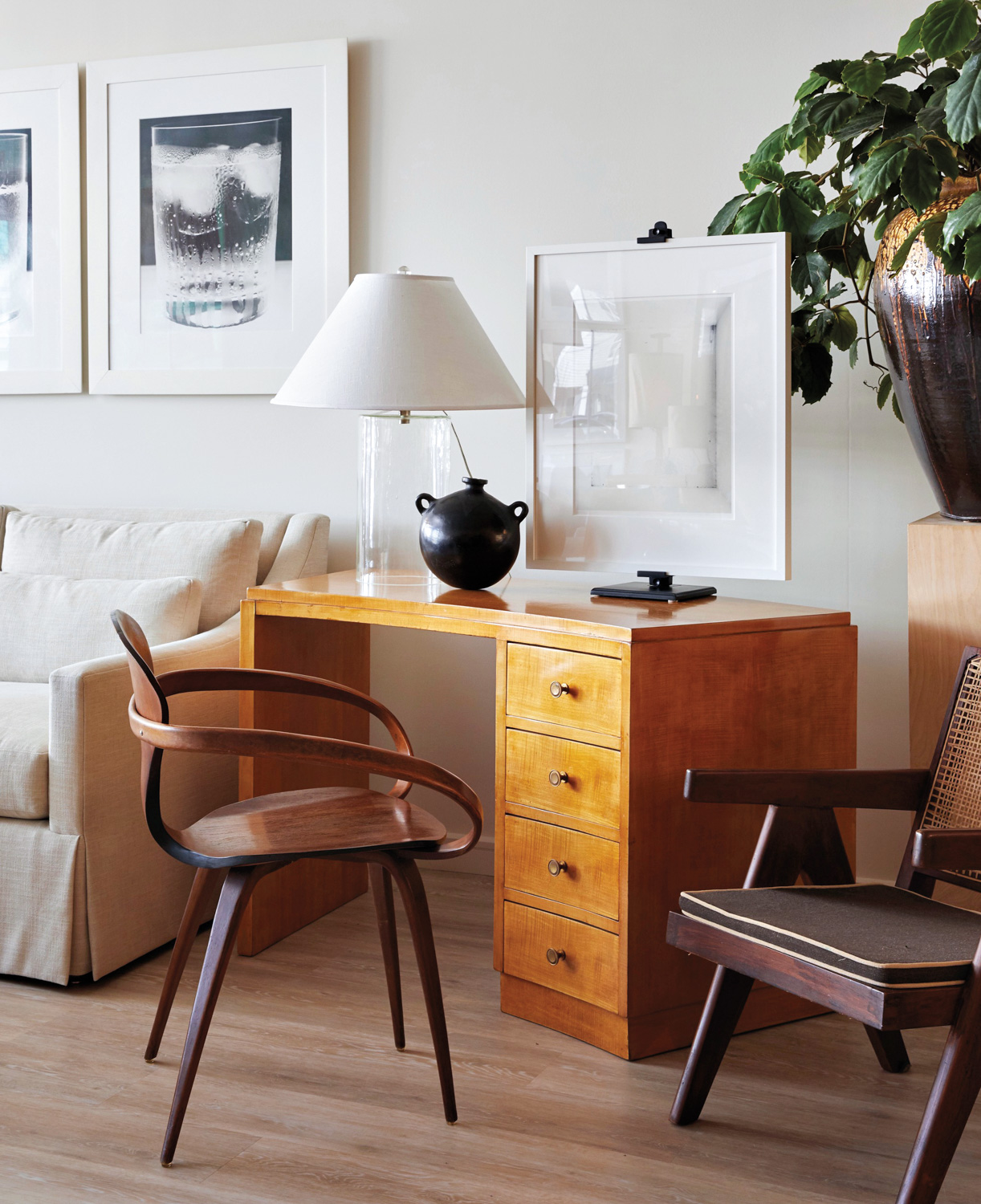 When Quinn Pofahl decided to open a Southampton studio, he looked to maritime law to distill his modus operandi. “Flotsam and jetsam is an old rule of admiralty,” he explains. “Jetsam means that if you find it, it’s yours to keep.”

Pofahl’s talent for the hunt has translated into an exquisite array of vintage furnishings and lighting (with an emphasis of French modernist designs of the ’30s, ’40s and ’50s), one-of-a-kind accessories and a rotating cast of fine art in partnership with JHB Gallery. “I often say I have everything from a Royere console to an American folk art popsicle basket,” he laughs, adding, “Somehow, it all kind of hangs together.”

Finding rare pieces is a favorite pursuit for the designer and collector—and one he’s delighted to see a growing appetite for. “After being cooped up in a catalogue world, I think people are drawn to uniqueness and the artist’s hand,” he says. “You might think clients here would want beachy-this or coastal-that, but I’m finding that’s not true. For example, I recently brought out this solid black and textured painting. I didn’t know what the response would be, but it has gotten a ton of attention.”

Looking ahead, Pofahl plans to introduce artist showings and furniture exhibitions where the genius of French designers like Pierre Chapo, Henry Jacques Le Même and René-Jean Caillette can be enjoyed within a contemporary context. But on any given Tuesday, you’ll find Pofahl simply enjoying his jetsam—such as a pair of tough-looking Brutalist leather chairs from the south of France, works from artist Amanda Means’ “Folded and Crushed” series and faux bois vessels by Minnesota-based potter Joe Christensen. “They’re hand-carved and glazed in bronze so that they look like steel,” he says. “I’m so in love with them that I think they’re coming home with me.” 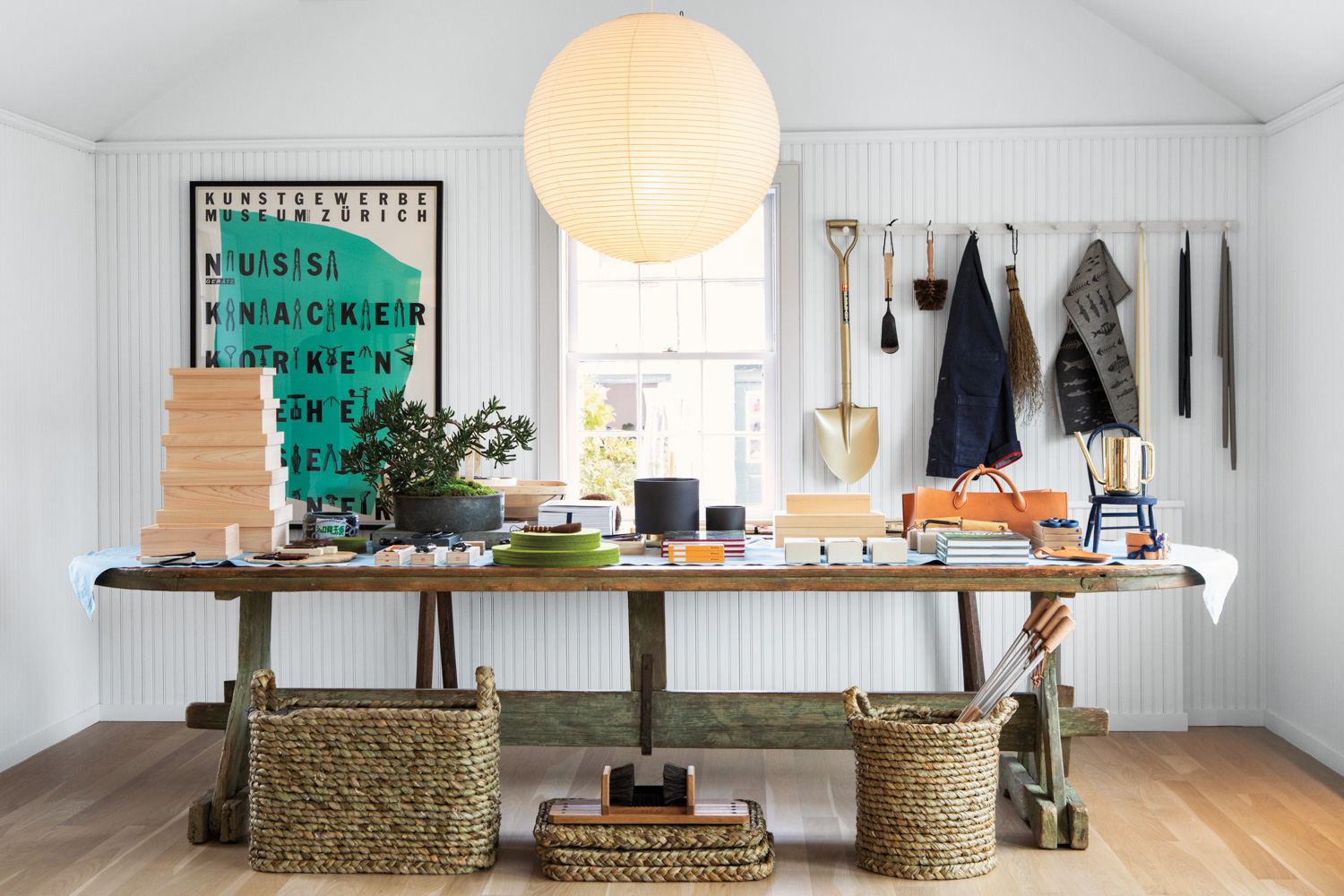 Plaited bulrush place mats and baskets from England. Iron garden trowels hand-forged in Japan. Pure white sea salt harvested off the Welsh island of Anglesey. These and other discoveries inspirit Elizabeth Eichner’s jewel-box shop in Amagansett. For the former set stylist, sourcing such storied, small-batch luxuries is a lifelong passion: “I’ve always looked for things that are interesting or artisan-driven,” she says. “And it felt like there was a niche out here to introduce items with function that were also beautifully executed, and that had an intrinsic connection to their maker.”

Set against a framework of pale gray wainscoting, white oak floors and Shaker peg rails, Eichner’s finely honed edit of artisanal wares, pantry staples, textiles and vintage treasures—an ethos she describes as “a cross between Scandinavian, Japanese and my own Anglo-Saxon roots”—beckons shoppers of all stripes. (Emblematic of the warm and welcoming mood, Eichner’s Welsh terrier, Daltrey, can be found sunning himself by the window.) “I wanted a shop where people could drop in for a box of English Champagne truffles on their way to a dinner party, or to come in and outfit their whole home,” she says.

In fitting Hamptons fashion, cocktail-hour accoutrements flew off the shelves during Eichner’s first season in business. English crystal and one-of-a-kind pottery dishes for dips and appetizers were heavy hitters, she shares, adding, “last September, I think we sold more caviar servers than any other store in the country!” This summer, beach-ready goods (think: Swedish enamelware; canvas safari-style folding stools and benches) join the mix—as do a growing number of exclusive maker collaborations in E-E Home’s signature cobalt blue. “For me,” she says, “it all comes back to telling a story— setting a mood, setting the table and having only the things you love around you.” 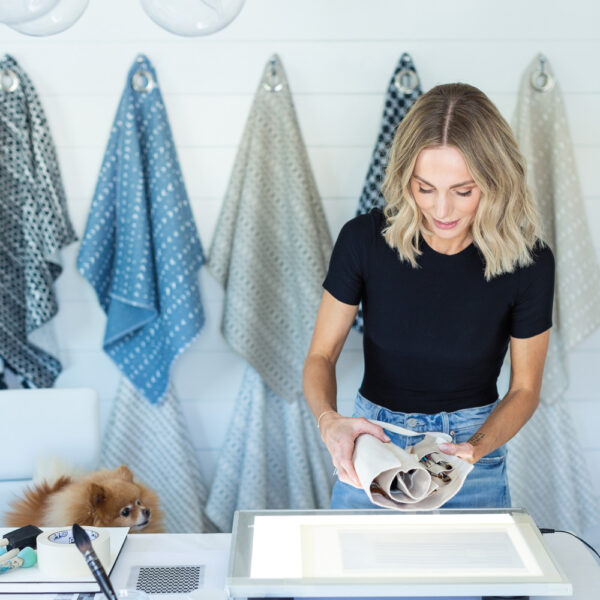 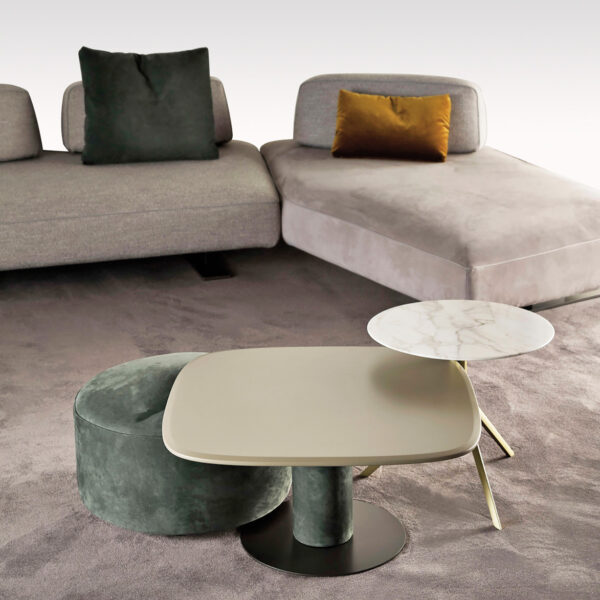 These Innovative, Design-Forward Pieces Have A New Home In Seattle 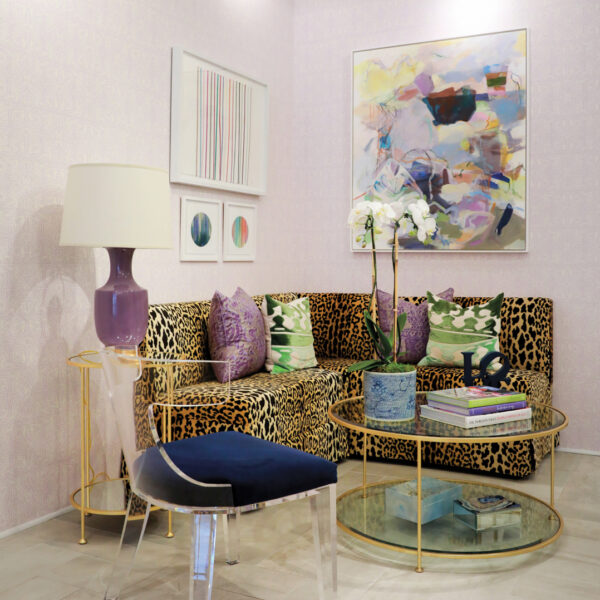 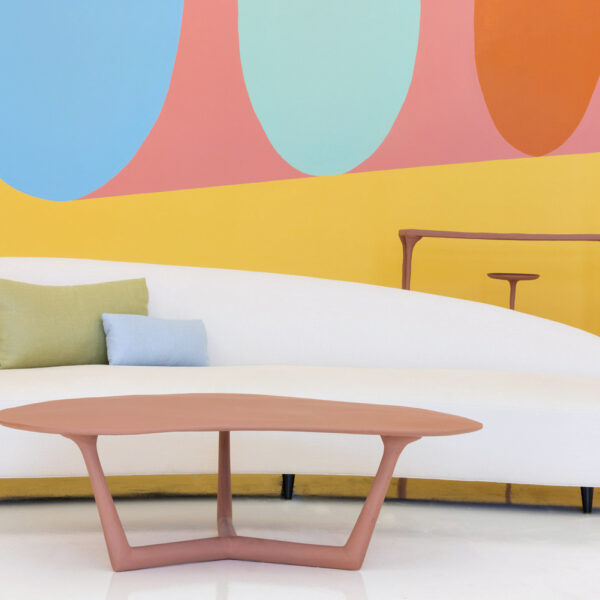 Don’t Miss The Bold Sculptural Furnishings On Display In Wynwood 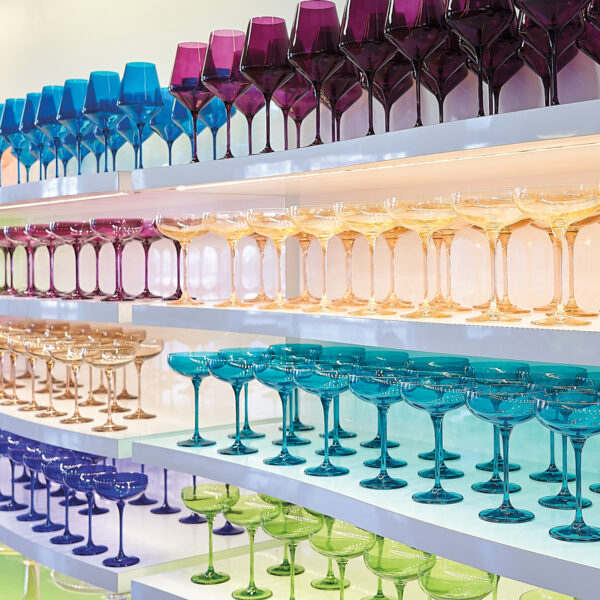 Get Shopping At These Dallas + Fort Worth Showrooms