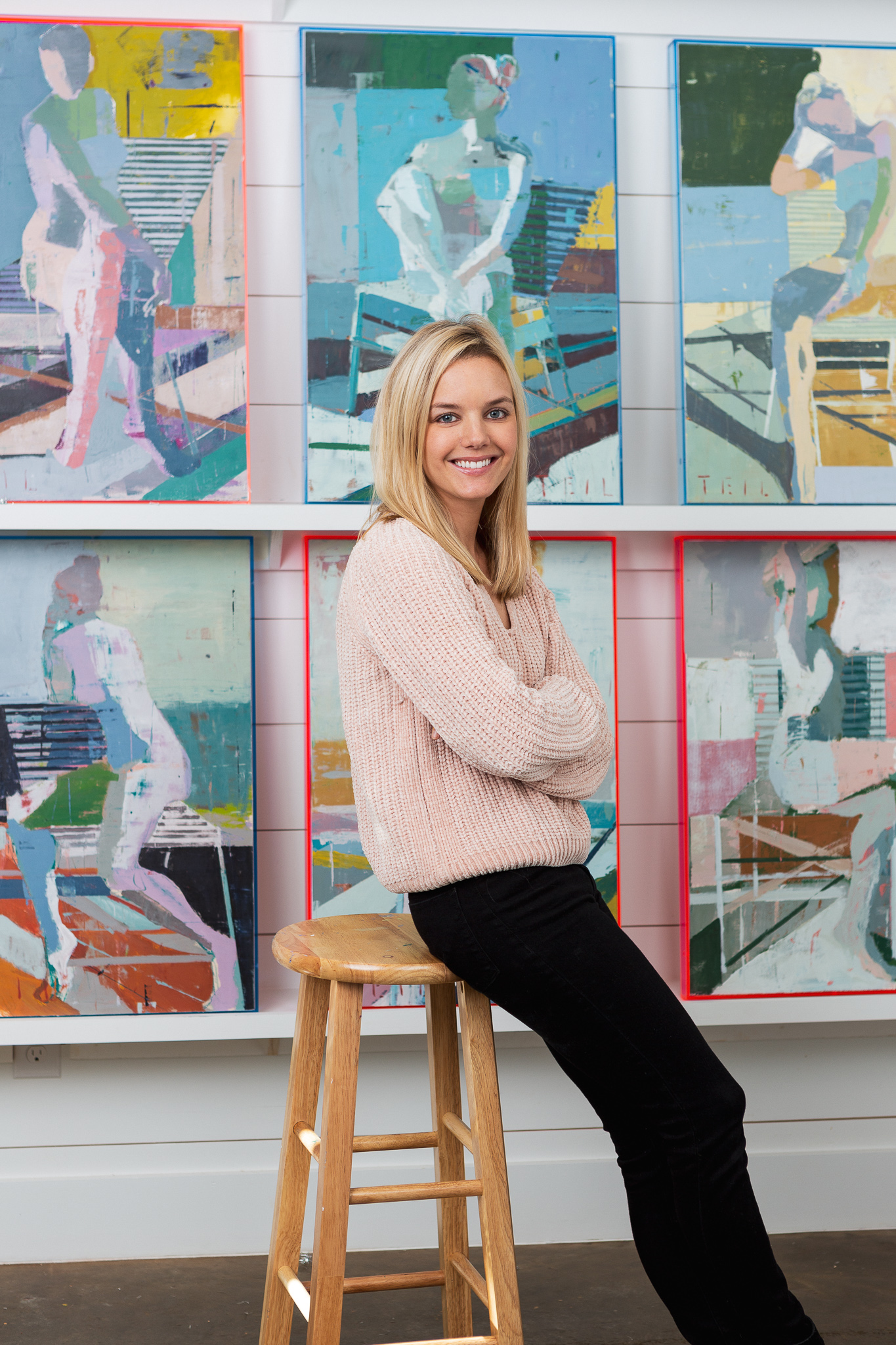 In April, Southern abstractionist Teil Duncan and her husband, pro golfer Russell Henley, left Charleston for her hometown of Columbus, Georgia, with aims of raising their young children closer to extended family. But a departure from the Holy City did not dampen the artist’s creative output. In fact, three months before completing the build of their new home, Duncan had already moved her easel and acrylics into a chic backyard studio with white walls to offset her colorful art. Currently lining the A-frame room’s custom shelves is a completely new series of 35 nudes in neon Lucite frames—Figure Studies—an expressive collection predicted to sell out at a blazing pace on its November 20 launch date. We learned what Duncan loves most about returning home, collaborations in the works and her covetable celebrity clientele. 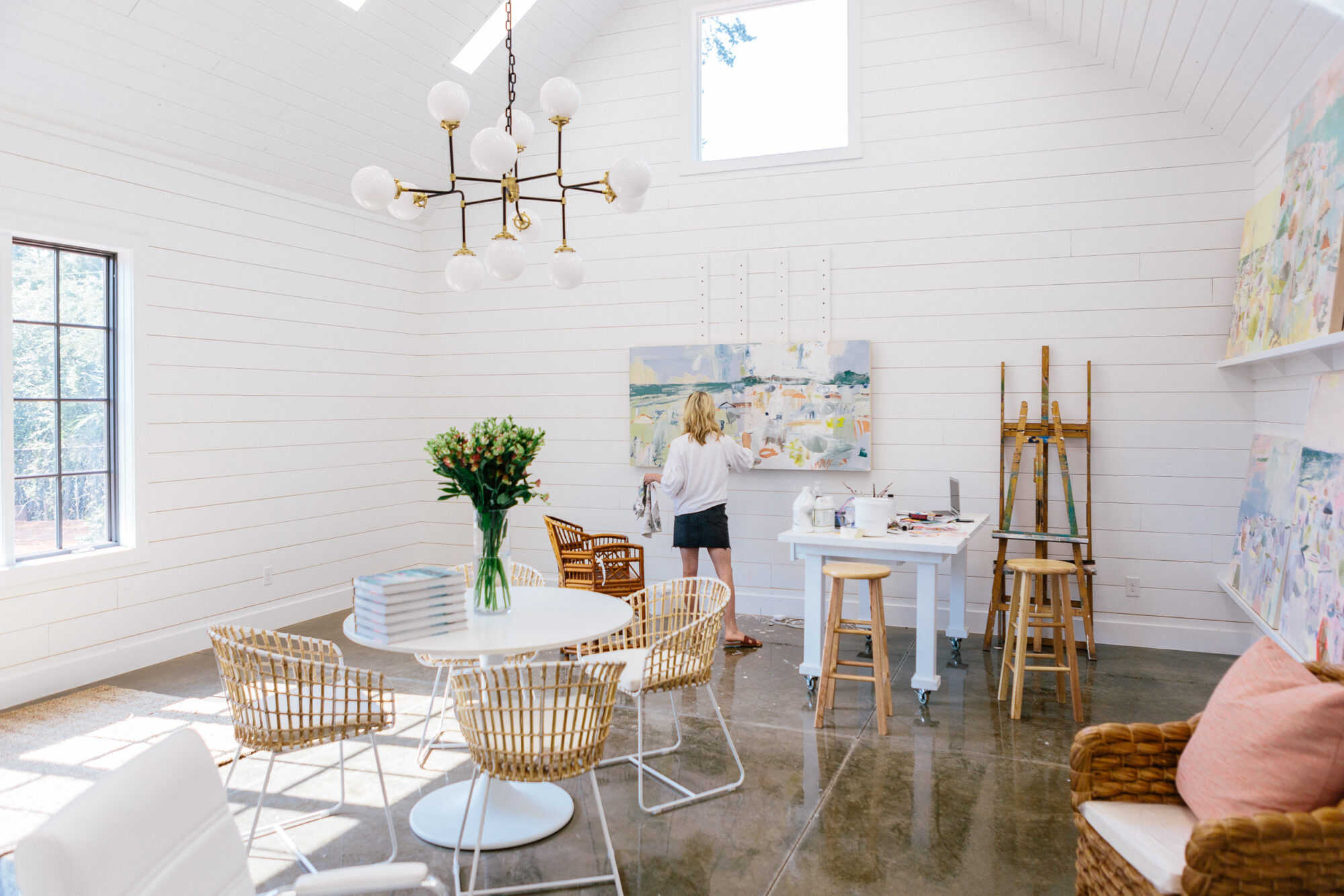 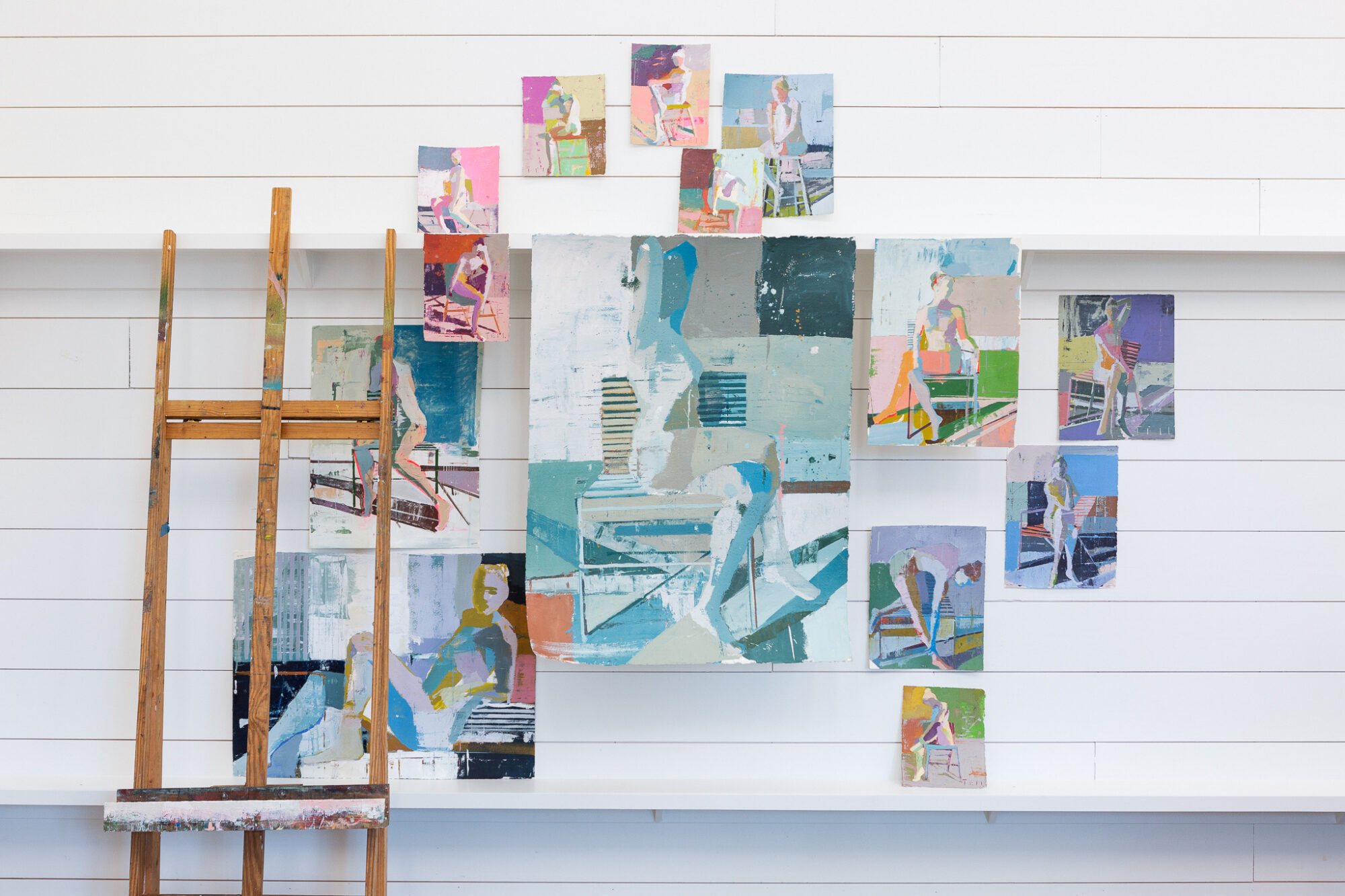 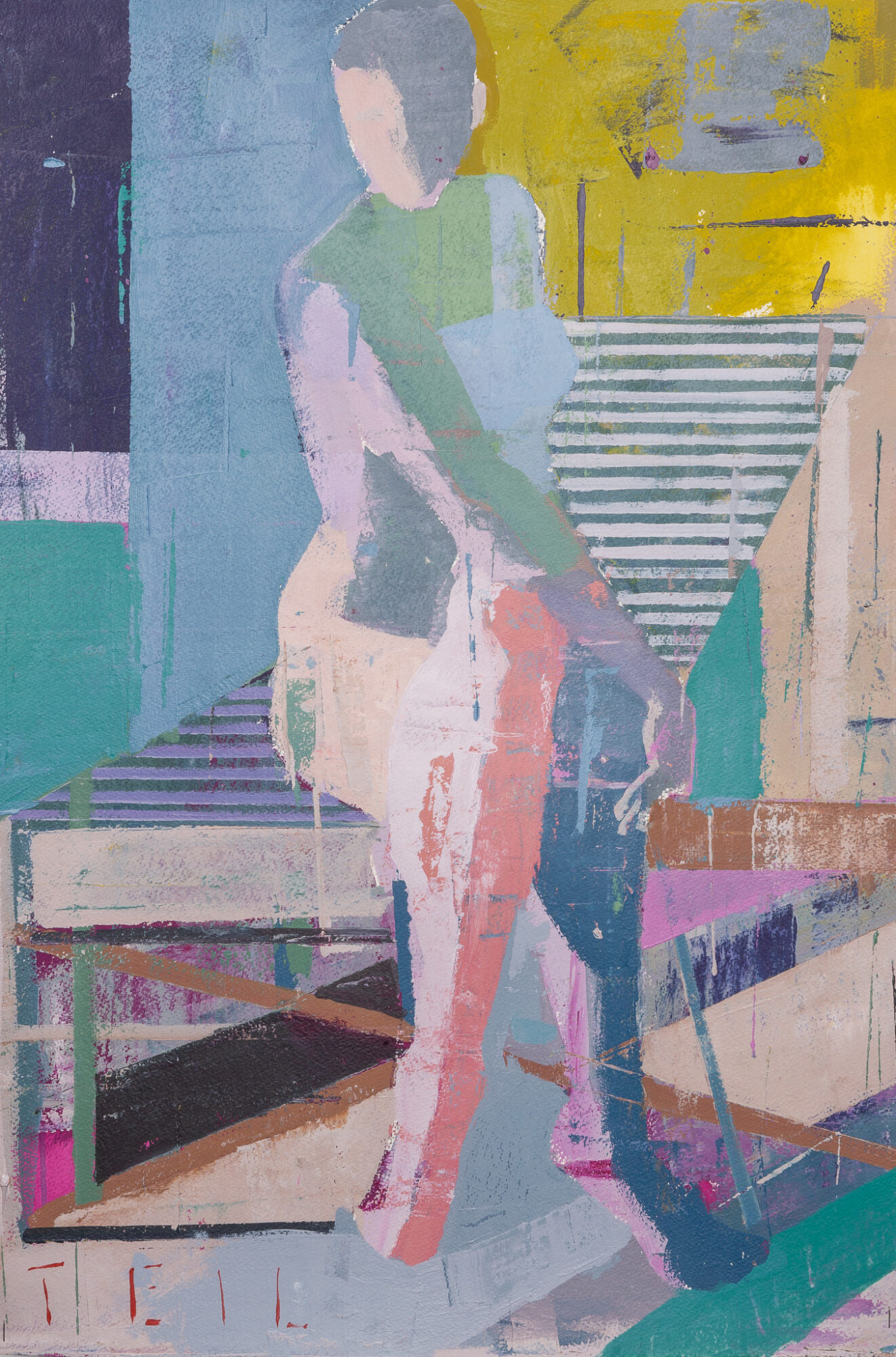 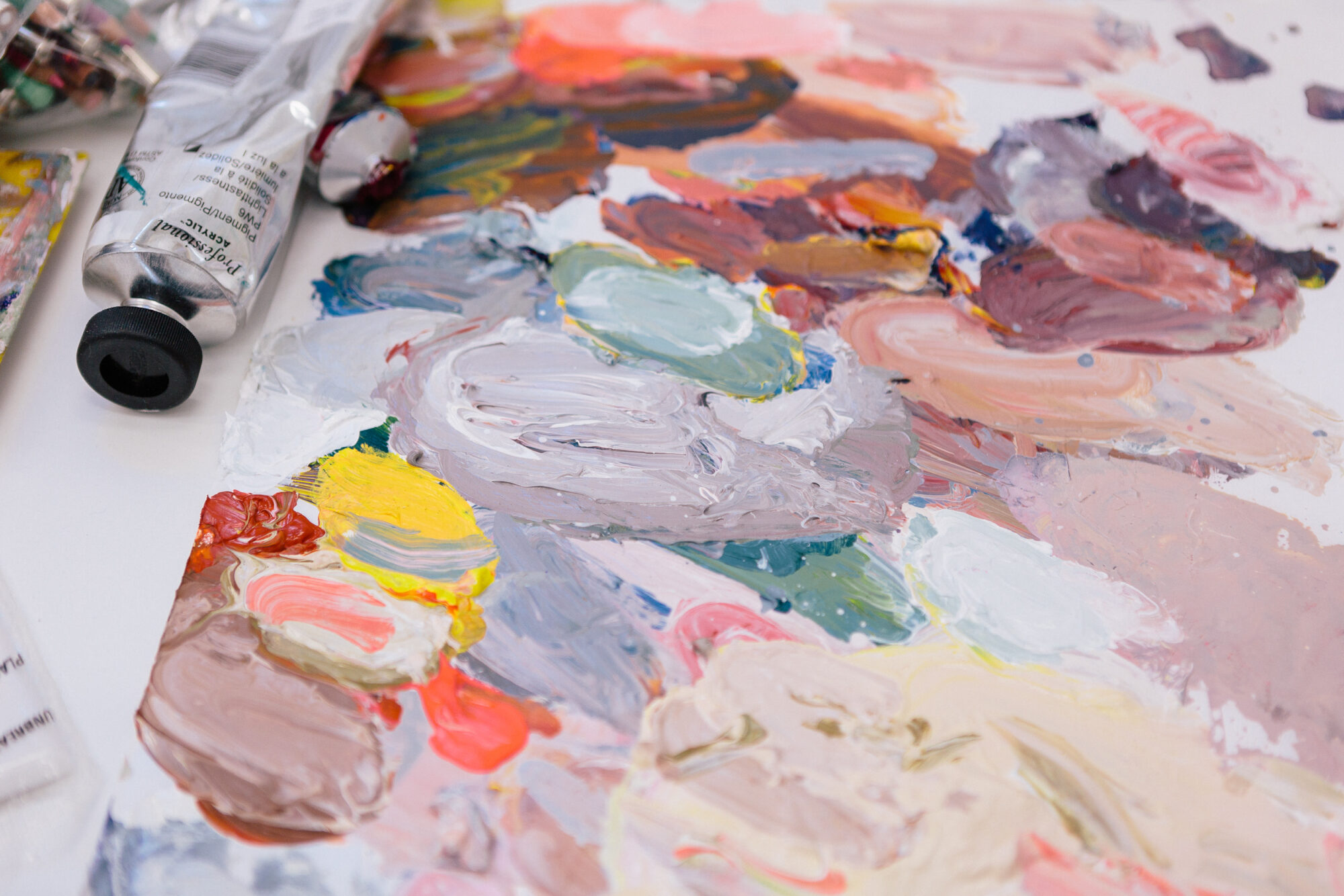 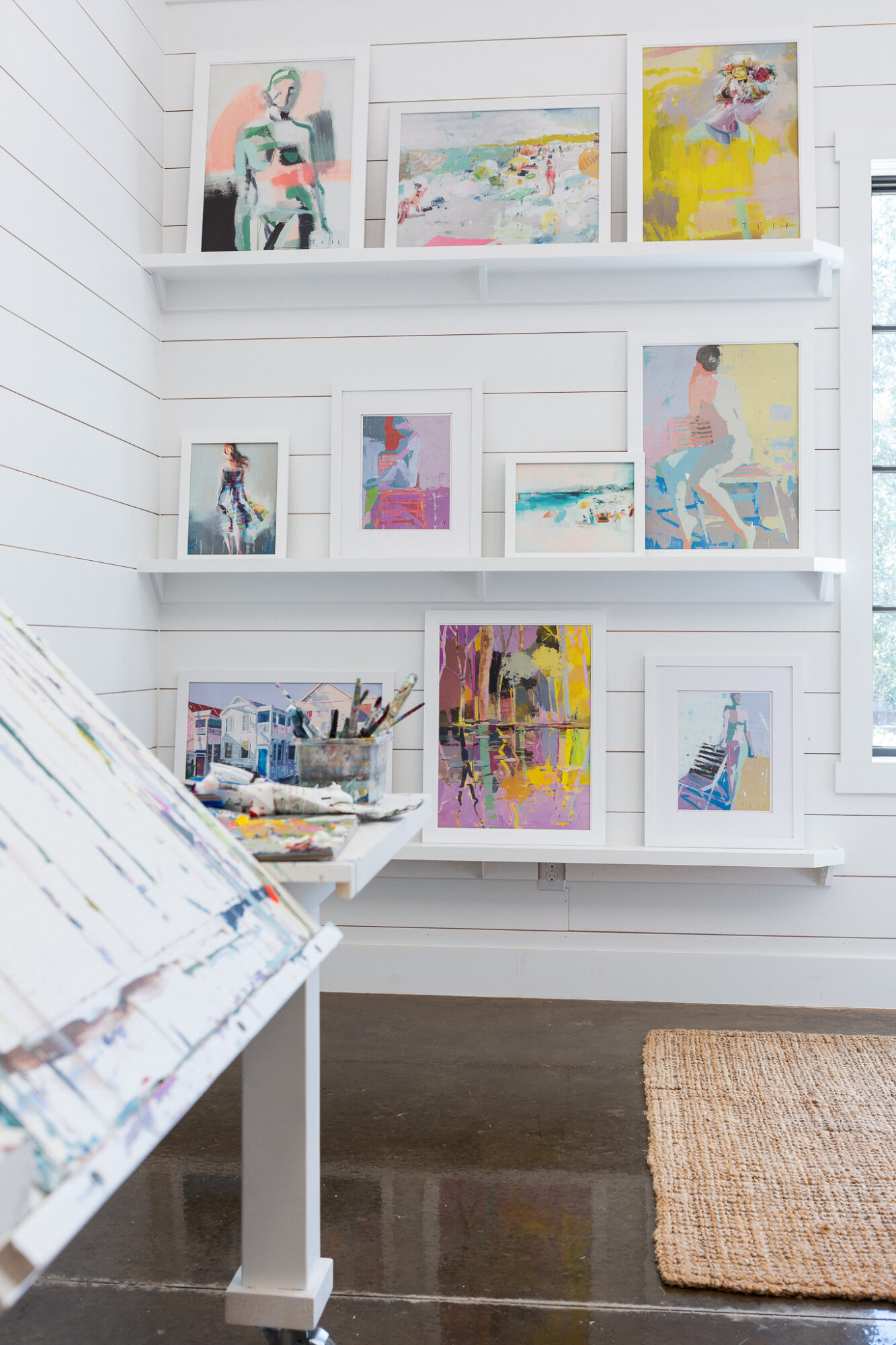 You kick-started your career in Charleston, but recently returned to your native Columbus; what do you love most about living there?
The seasonal change–we get fall color here–and as much as I love the flat land of the Lowcountry, moving back has made me appreciate hilly terrain. There is a rhythm to this landscape.

I know there’s a pretty substantial creative community in Columbus.
Yes, a lot of people are shocked at the number of artists that come out of this town: Bo Bartlett, Kate Waddell, Kate Mullin, Lulie Wallace. Lulie is from here originally; she was a year ahead of me in high school. In Charleston we actually had side-by-side studios for like six or seven years.

Lulie has produced some pretty fantastic textiles, too; do you have any projects like that in the works?
I’m actually preparing different sketches for wallpaper patterns for Kravet right now, and I’m creating a separate wallpaper design especially for Dallas designer Caitlin Wilson, along with exclusive prints.

Let’s talk about inspiration for your new series.
I looked to American painter Richard Diebenkorn as a reference point, taking the shadow lines of the chair the figures are sitting on and abstracting them in the background. The push and pull of their curvy silhouettes with the harder lines was interesting to me. In decorating my own home, I keep in mind what I want to look at every day, so my palettes have become more muted as a result–but still with surprising pops of color.

Your original paintings are notorious for selling out right away.
We always say there’s no way it will happen again, then somehow, it happens. So, buying the day the collection launches is best. I sell through my own website–I’m not represented by a gallery. We’ve also made prints of a few favorite pieces that will be available for a while after.

One reason they sell out is because of celebrity demand–Busy Phillips, Sia, Emma Roberts are all fans. Are commissions like these keeping you busy?
I’m about to produce a couple paintings for Jessica Alba–one for her house and one for her The Honest Company office–and I just completed one of my beach paintings for Mindy Kaling.

That’s very cool; did you have a “pinch-me” moment when the first famous person called?
Yes: Christian Siriano. I think he found me through One Kings Lane, which sells my prints. He just casually mentioned he’d based the palette of his entire 2015 resort line off of my series of nudes. He invited me up to New York to shoot the collection with my paintings as the backdrop. At the end of the session, we traded paintings for clothes.

You’ve enjoyed product partnerships with brands like Anthropologie and Crate & Barrel in the past; do you have a hands-down dream collaboration?
Ever since I’ve had kids, I love the brand Maisonette. Designing anything for them–whether patterns for clothes or an exclusive line of prints–would be super fun. I also love Marysia swimwear. I’d like to design a pattern for one of her swimsuits.