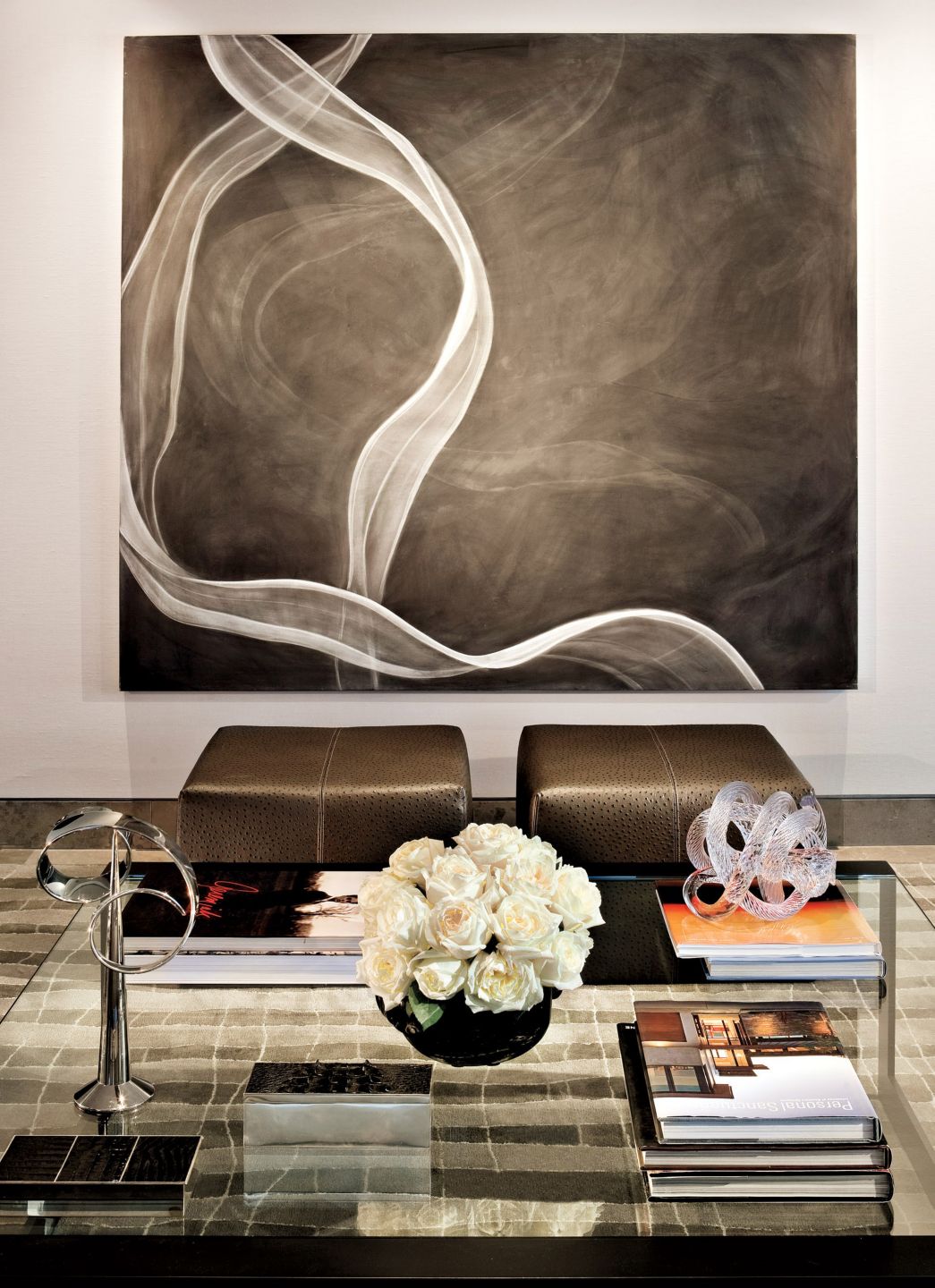 Contemporary art work complements the shades of gray found in this living room.

Contemporary art work complements the shades of gray found in this living room. 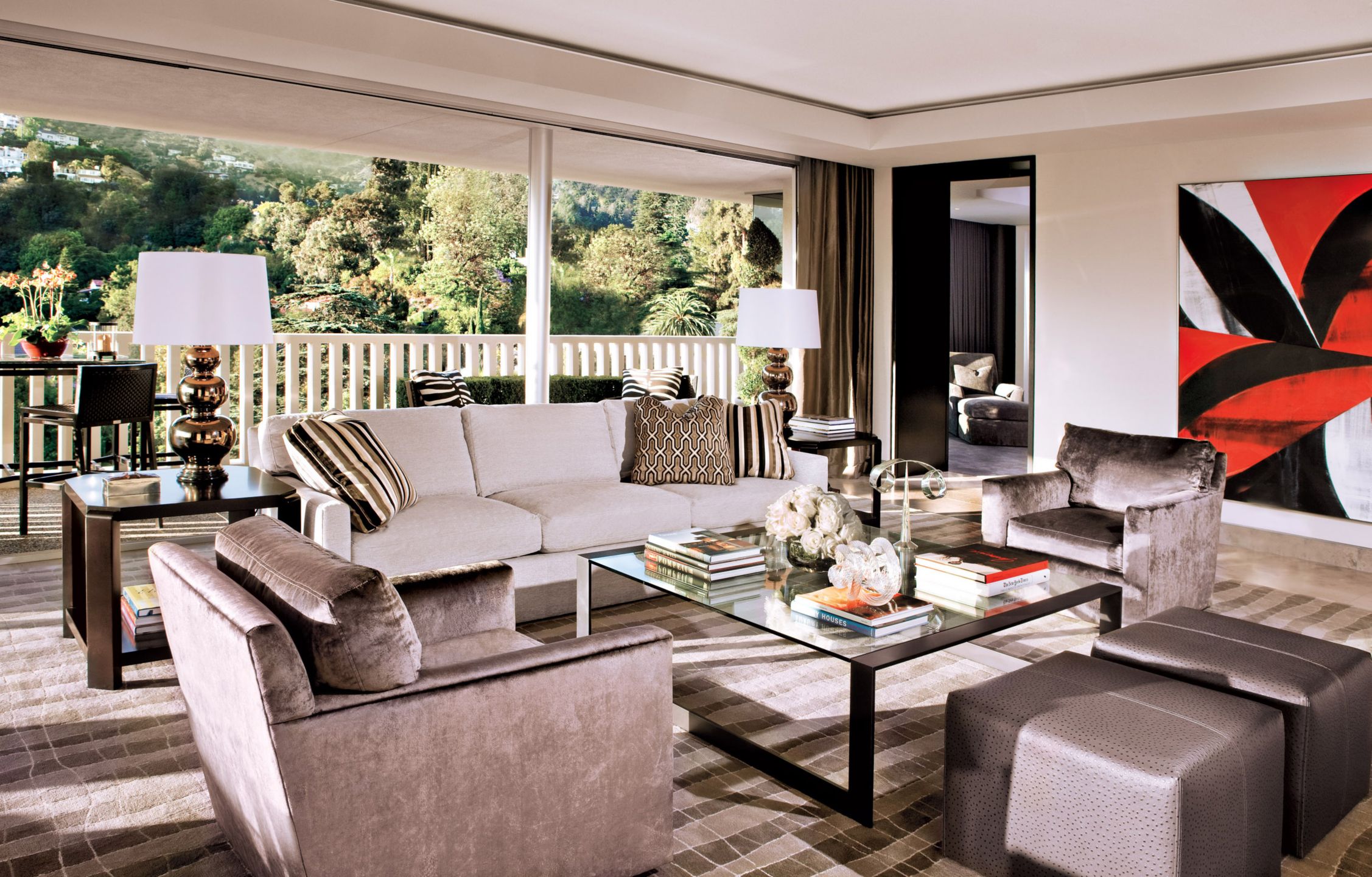 This monochromatic living room uses patterns and art to express a sense of depth and warmth.

This monochromatic living room uses patterns and art to express a sense of depth and warmth. 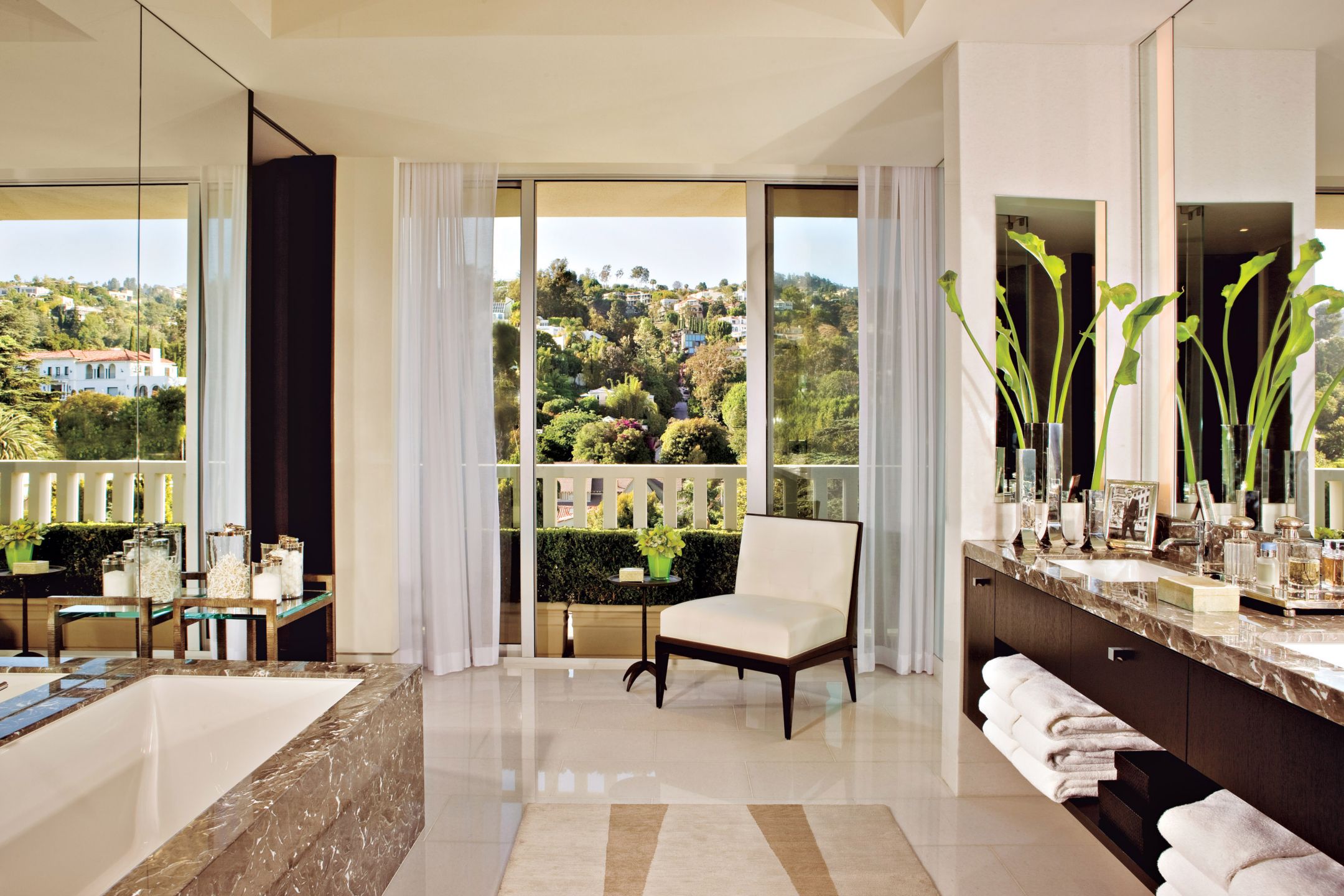 Shades of white and cream create a glamorous yet calming atmosphere in this master bath.

Shades of white and cream create a glamorous yet calming atmosphere in this master bath. 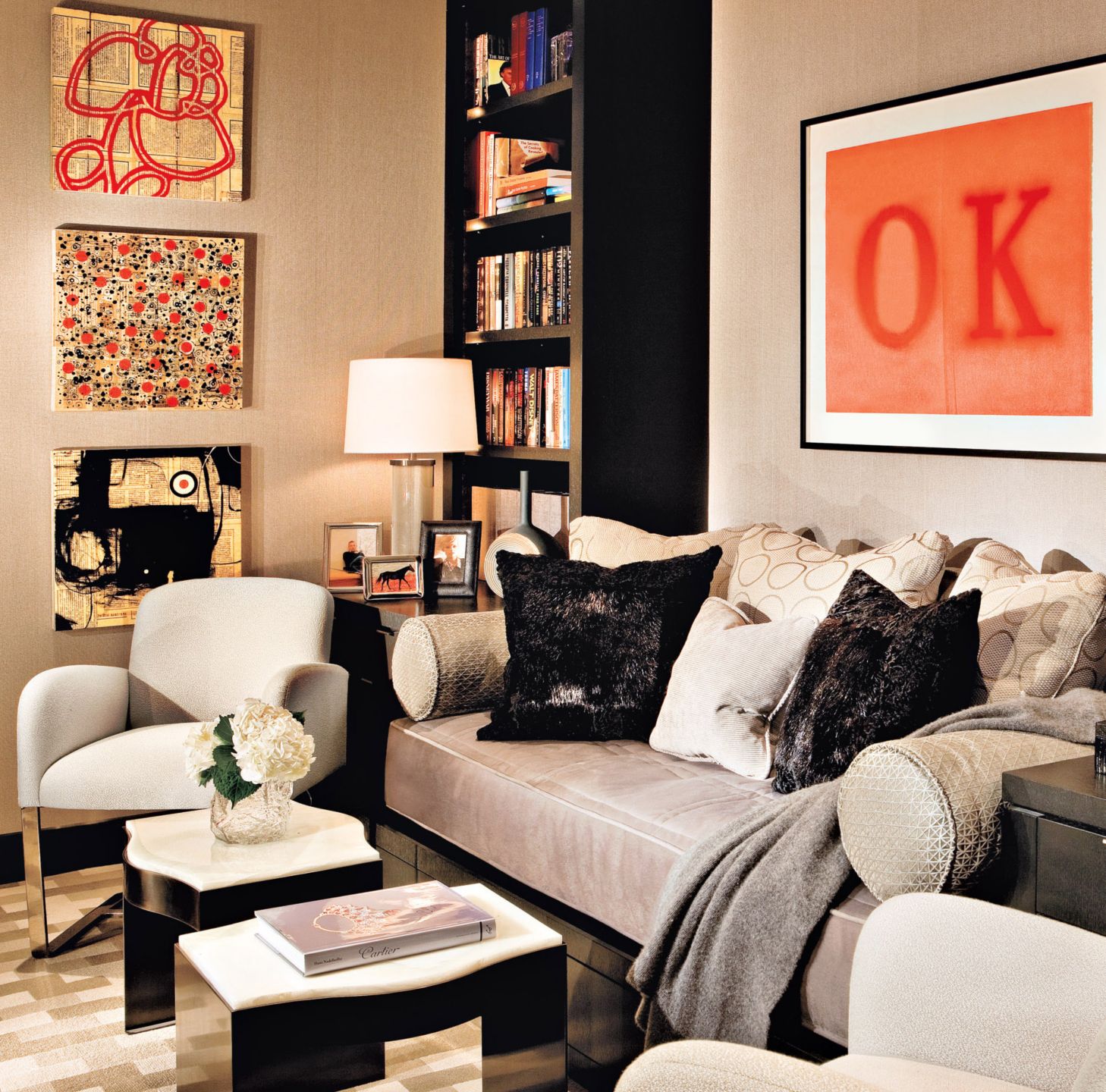 Artwork adds a punch of color to this monochromatic library.

Artwork adds a punch of color to this monochromatic library. 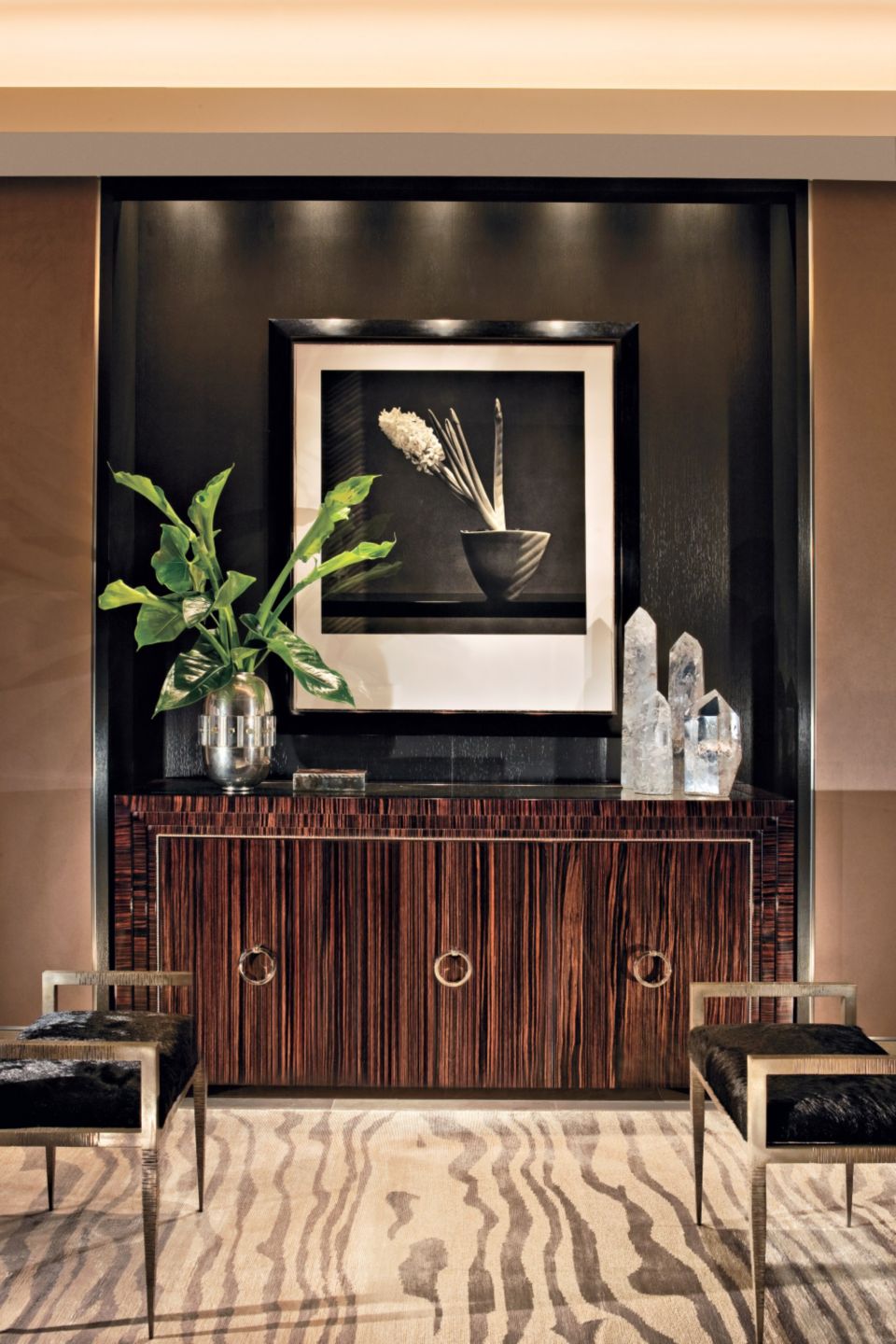 A contemporary foyer welcomes guests into this sophisticated apartment.

A contemporary foyer welcomes guests into this sophisticated apartment. 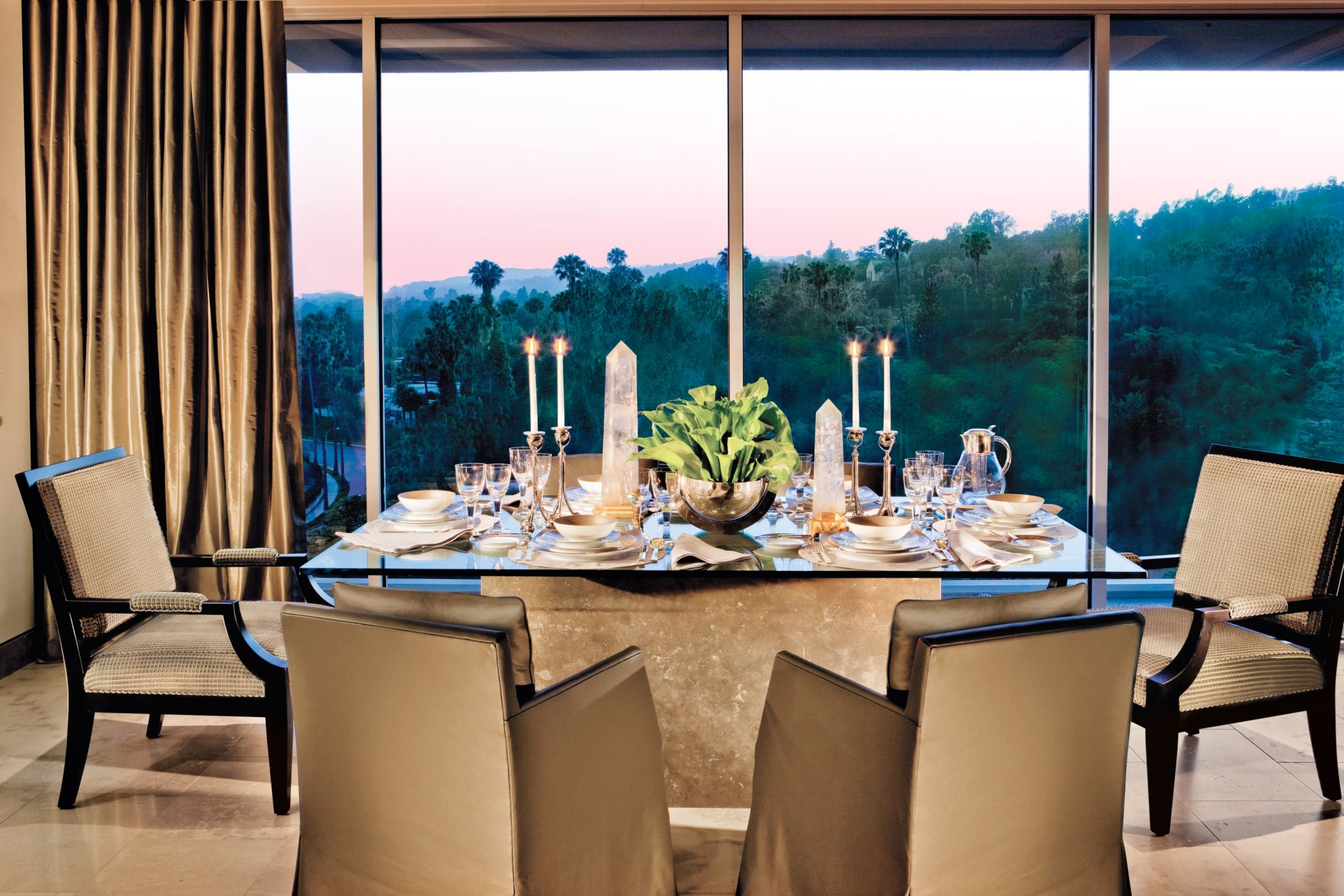 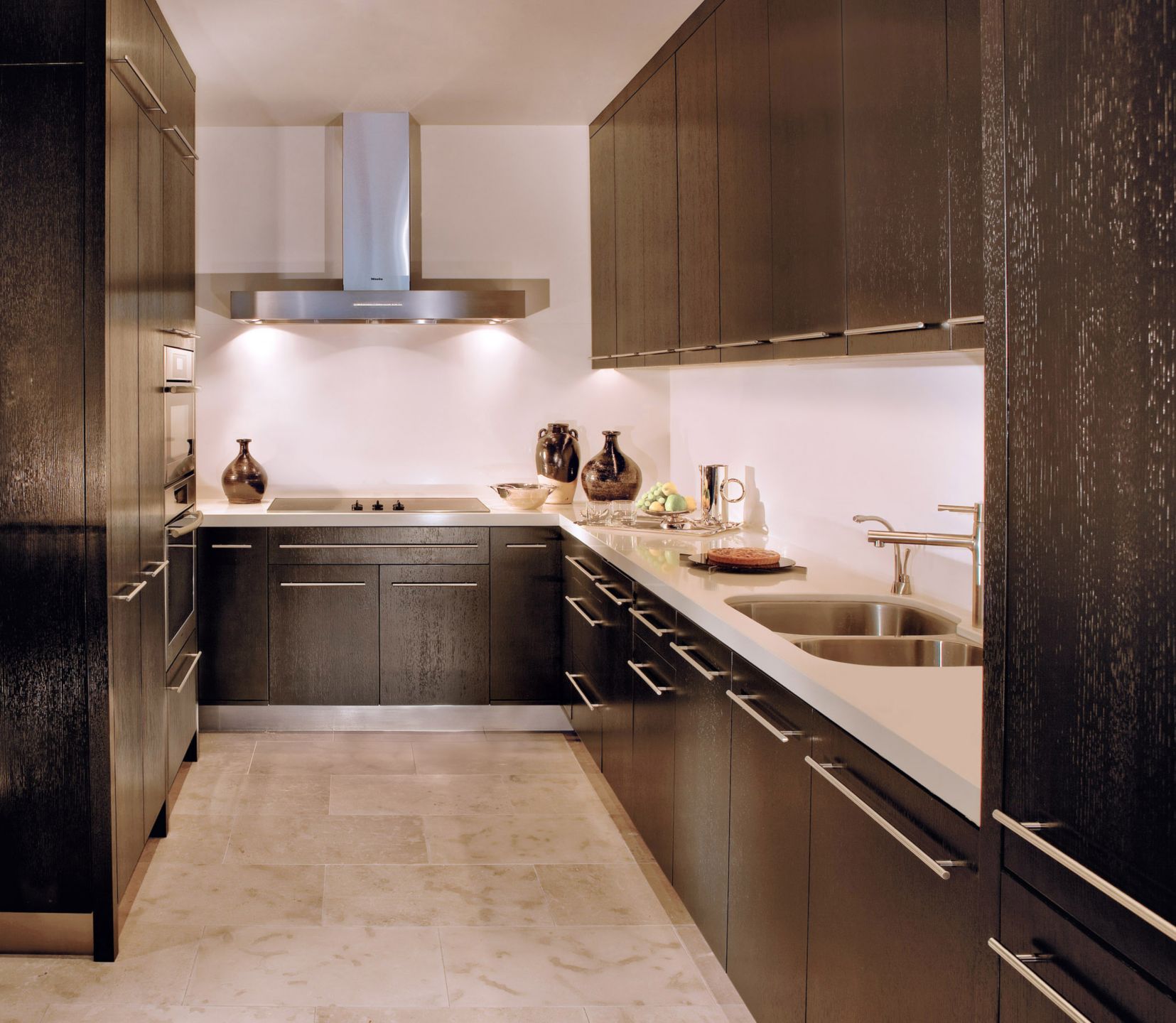 This clean, functional space was designed with rift oak and CaesarStone.

This clean, functional space was designed with rift oak and CaesarStone.

For most people, Beverly Hills summons images of mansions on rolling green lawns. For the savvy few, it’s home to some of the finest urban living in the Los Angeles area, with high-rises boasting killer views and ample space, well located but still a distance from gritty downtown.

Alabamian Josh Greer already had plenty of real estate know-how as a townhome developer in his home state, so, when he moved to LA, he immediately gravitated to a Beverly Hills building better known among longtime Angelenos.

“I think I’ve always had an eye for real estate,” says Greer. “It has a draw you cannot explain, and, once you’re here in Los Angeles, you realize that it’s at the center of everything.” He also discovered the city to be the perfect base from which to pursue his penchant for buying a home for himself, then renovating and reselling it and starting all over again. “That can be disruptive if you move neighborhoods,” Greer said. “I landed here and realized that I can keep redoing spaces and never have to leave home.”

He has renovated four apartments over the past five years, the last two with designer David Phoenix, of the namesake LA firm, whom he initially met socially. Yet perhaps more important than their friendship was Phoenix’s high comfort level with his client’s admitted perfectionism. “He’s very particular about where he watches TV, where he talks on the phone and where he works,” Phoenix says.

And this job was huge. The prior owner was a hoarder who had lived there for many years. “There were tires in the living room, and it was beyond filthy,” Phoenix says. “We took this apartment down to the studs. It looked like a crime scene.”

The designer’s task was to create “an elegant, refined interior that suited my client’s needs,” he says. “The elements in this apartment are traditional, but we’ve given it an updated look—it’s clean and fresh. Being monochromatic and not having a lot of things going on makes it more streamlined, but it’s warm and inviting. It says, ‘Hello,’ when you walk in the door.”

The apartment, originally built with six rooms (three of them bedrooms) in 1964, was reconfigured into an airy two-bedroom home with three baths, a meticulously designed room-size closet and a foyer—the building’s first—for privacy. To raise ceilings 1½ to 2½ feet, air vents were hidden in soffits. “It took a year just for the build-out,” Greer says. “It was like assembling a ship in a bottle. We were stringing wiring and AC ducts down to an eighth of an inch.”

Since Greer is not a fan of color, Phoenix stuck to a palette of gray, white and black, with only occasional splashes of orange for contrast; visual interest was supplied by contrasting textures. “He likes to have friends over to enjoy the color outside,” Phoenix says, referring to massive windows with grand views of city lights and hills, and a balcony that runs the length of the apartment. “You have the green landscape, and it’s very dramatic.”

Just as important as what you see is what you don’t: Greer wanted to outfit his man cave with the latest technology—controlling entertainment, drapes, alarms and more with a single touch—and he insisted that all of it be invisible, hidden behind cabinetry.

Adam Leichtman, of Access Point Designs in Van Nuys, helped him accomplish that easily. “Every other AV person I worked with, I’d get into a knock-down, drag-out fight because they’d want to see everything, and I didn’t,” Greer says. “But Adam was excited about helping me do things the way I wanted to.”

And now that he’s dotted every “i” in his ideal interior design, Greer may just stay put for a while. “I really love where I am,” he says. “This has everything I ever wanted to incorporate in a unit here, down to every inch. I had four tries; I finally got it right.”

How An Ornate Chicago Penthouse Transformed Into A Chic Bachelor Pad