Sometimes a house defies labels, as seems to be the case with the Newport Beach residence of Julie and Darrick Walker. “It has an elegant coastal style with European overtones,” says landscape designer Molly Wood, who collaborated on the project with architect Cynthia Childs and designers Erin Curci and Erin Flinn. “The house looks like it’s always been there, yet it has modern elements,” says Childs, while Flinn notes that it feels “casual yet elegant, beautiful but realistic.” Builder Neil Longman would describe the residence as having “a beachy feel mixed with rustic elements.” While the house might have its contradictions, they all fit seamlessly together.

The structure, which sits comfortably on a tight 45-by-93-foot lot, was designed to maximize outdoor living. On one side of the front entry, which is flanked by two olive trees, Wood created a seating area by installing a built in banquette and a fire pit, and the designers added three Kingsley- Bate resin wicker chairs. On the opposite side, Wood centered a birdbath on picturesque bluestone step stones. “It’s decadent to use that much Orange County real estate just for beauty, but it was worth it,” she says.

Additional usable outdoor space comes from a southern-facing courtyard, the centerpiece of the house, which is appointed as an alfresco dining room. Wood enclosed the small but pivotal space with reclaimed iron panels and then coaxed vines to grow along an iron trellis, offering shade but still allowing the sun to peak through. She also put in lush Mayten trees and angel’s trumpets along the walls.

Childs used a mix of materials—wood, stone and brick—to mark the exterior, and took a similar approach inside to add depth. Childs chose rough-hewn materials like reclaimed wide-plank French oak flooring and bricks with a hand-washed look to give the structure a “European flair.” Antique beams, sewn together with painted tongue-and-groove planks, line the cathedral ceiling of the master bedroom and form a grid pattern on the living room and kitchen ceilings. The beams “give old-world strength to a fresh look,” says Childs, who finished the stair railing with a reclaimed feel and acid-washed oak shelves to nest into built-ins in the master bedroom.

“We used pieces with simple lines because the house already has a lot of texture,” Curci says of the approach she and Flinn took with the interiors. “But at the same time, we kept things interesting by custom-designing pieces and searching for special items.” The duo, who worked within a muted color palette, highlighted the living room’s built-in shelves with a soft sea green.

They then appointed the space with comfortable yet tailored furnishings that they designed in a “coastal French” style and covered with soft linen blends. Although Flinn and Curci custom designed most of the house’s furnishings, they also reworked some pieces to fit within the same European aesthetic. In the master bedroom, they reimagined bedside tables by adding a new layer of paint and a marble slab on top.

In addition to the elegant sensibility, the house’s location and clients’ lifestyle also played a role in the design. “We wanted the home to feel inviting and remind them that they’re living near the beach,” says Flinn. In the dining room, the designers refinished the owners’ cherry-stained dining table to match the lighter wood tones in the house and then paired it with greige-stained white oak dining chairs. The chairs’ gentle but pronounced curves echo the furnishings used throughout.

Although the scale of the house makes it feel comfortable and spacious, Childs still maximized the space by designing details like a coffee bar and hidden memo desk in the kitchen and shelves tucked into archways in the wall. “We got a lot out of this little lot,” says Childs. “It may not be easily pinned down to a single style, but it has a lot of personality.”

After A Decades-Long Wait, A Savvy Sibling Design Duo Transform A SoCal Abode

A Nashville Home Where Styles Blend And Spirits Lift 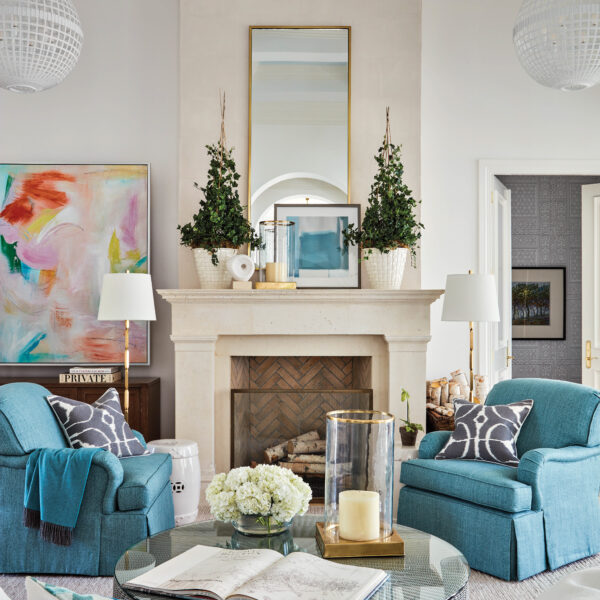