With a toddler and a baby on the way, high style wasn’t on the radar for a young Alexandria couple when they bought their new house. Keeping up with daily life while the husband was frequently traveling for business was the main focus, so they defaulted to the familiar when furnishing their home. “I ended up decorating the house sort of in the style of my parents,” the wife says. “Then, when my son turned 5, I looked around and thought, ‘Wow, this is just not me. It doesn’t feel like a place I want to live in.’”

Unsure how to fix the problem, they turned to their friend and neighbor, designer Shazalynn Cavin-Winfrey. “They reside in a Colonial-style home, but they definitely enjoy more contemporary lines,” she says. But the first task was expanding the house to accommodate their growing family.

The couple hired builder Tim Moran to raze their existing garage and the room above it, and replace it with a newly excavated basement wine cellar, a garage and mudroom overhead, and a second-floor playroom on top. The construction required Moran’s foundational expertise. “In order to hold the weight of a car, we put reinforced corrugated steel on the foundation walls and poured a concrete slab over the top of the steel,” Moran explains. With a structurally sound addition in place, Cavin-Winfrey then designed a bright, pistachio-colored playroom with soft patterns and sturdy surfaces.

Cavin-Winfrey’s clients were so happy with the casual elegance of the new wing that they asked her to keep going through the rest of the house. Next came the family room, which gained visual weight with built-ins around the fireplace, plus a strong dash of blue for energy. The existing kitchen wasn’t working, either, so Cavin-Winfrey redesigned it to incorporate more storage, a generous island and a bar-level table with additional seating. “Part of the fun of cooking is being able to talk to people while I do it, so this really ties that together for me,” the wife says.

Cavin-Winfrey used a soothing palette of grays, blues, tan, and cream to join all the rooms together. “We were trying to build a connection between the spaces, visually and structurally,” she says. “We created connectivity through color, with the foyer being the main impetus for pushing the tones throughout. It creates a sense of energy and excitement.”

The designer also added pattern with whimsical wallcoverings, and the homeowners were surprised that they liked it so much. “In a million years, I never would have thought I’d agree to that wallpaper in the foyer,” the wife says of Quadrille’s dramatic Persepolis pattern. “But I walk in every day and take a cleansing breath because I love it. And the wallpaper in the kids’ homework room has the birds all over it. At first, I said no, but it’s quirky and also sophisticated, and it works perfectly.”

Mindful of the family dog and her clients’ small children, Cavin-Winfrey incorporated durable and easily cleaned surfaces and fabrics throughout the house, even laminating some fabrics in highly trafficked rooms. With Cavin-Winfrey’s guidance, the owners now live in a house that speaks to their own taste—and suits the needs of their family. “I’m a busy mom, so my life is somewhat chaotic, and this house is restorative,” the wife says. “It’s a breath of fresh air.”

When A Chicago Designer Is Inspired By His Stylish Client, Unforgettable Design Emerges

For A California Vacation Home, A Design Team Draws On A Family’s Most-Loved Recollections 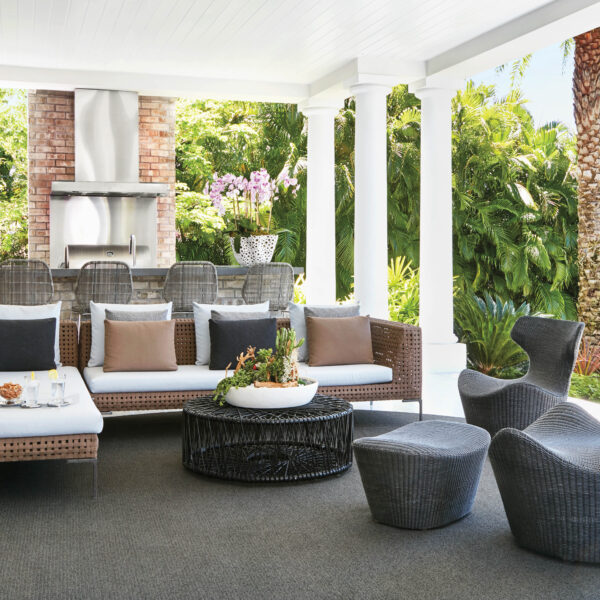 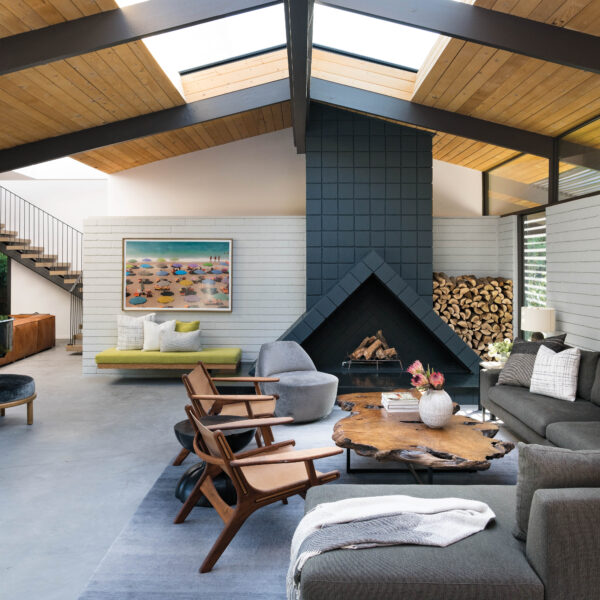 A Family’s Modernist L.A. Home Gets A Livable Update