It has been said that the average American who owns a home will stay in it for roughly 13 years before moving out and buying another. But “not if you’re in the business,” quips residential and commercial general contractor Anthony J. Salcito Jr., who believes that this statistic is considerably lower for home builders and has numerous change of address records to prove this exact point. In the past 10 years, he and his wife, Rebecca, an interior designer who also works in their family-owned business, have built and lived in three homes before spending time in another with their two young sons while completing their current residence in Scottsdale’s luxurious Silverleaf community.

“It’s an industry hazard,” teases Rebecca. “When you see all of these intriguing new options in the marketplace, you want to try them out yourself. And then every time that happens, we move.” Inspiration for the layout of the new house came from the land beneath it—a 1.71-acre lot with unobstructed mountain views and a desirable configuration. “The minute Anthony saw it, he decided to buy it,” she continues.

But figuring out what to do next was trickier. “Our taste has become more clean and modern over the last decade,” says Anthony, who characterizes their first home as “a relaxed contemporary Pueblo,” and the last one as “Spanish Colonial but slightly more formal.” Also, “their new property called for a really thoughtful, and significant, design because it’s at the intersection of two of Silverleaf’s most prominent streets,” says architect Dale Gardon, who collaborates frequently with the Salcitos and has designed most of their personal projects. “Anthony’s really astute and always in the vanguard when it comes to design, which is why he wanted to analyze all his options before building again.”

Acumen schooled by daily exposure to design trends motivated the Salcitos to opt for a formal Mediterranean home this time around. “It let them fulfill their needs, but also reflects the most compelling new shifts in the business,” explains Gardon. Chief among these is a growing inclination “in this area for architecture that’s more timeless and classical,” adds the architect, who in fact wrote the community’s architecturally rigorous design guidelines and takes great delight in the fact that “the house has really attracted a lot of attention in the neighborhood. People literally stop their cars to take a closer look at it.” Ultimately, “it was the style we felt we could keep the most clean-lined yet modern,” Anthony says.

The structure that ensued, with its pristine stucco fac¸ade, clay tile roof and stately limestone-trimmed French doors and windows, is every bit patrician Mediterranean on the exterior, with the inside boasting a more clean-lined interpretation. “We wanted it to be a real family home with spaces we could all use at the same time,” explains Anthony. To that end, the contemporary layout and detailing are designed for 21st- century living. A formal living and dining room share one extra-large soaring space for entertaining ease; the kitchen, informal dining area and family room allow for generational togetherness while cooking, eating, playing, and watching TV; and the outdoor areas are as fully comfortable, spacious and multi-functional as those inside, boasting ample seating space backed by beautiful grounds conceived by landscape designer Jeff Berghoff featuring rows of clipped hedges and annual blooms.

The home’s design also allowed Rebecca to flex her increasingly refined style sensibilities—taking more chances with pattern and texture to glamorous effect. The designer recovered contemporary pieces they already owned in richer fabrics; used statement-making carpets or stone tiles to anchor every space; and crowned every room with dazzling fixtures or chandeliers. “It really reflects our shared and evolving aesthetic,” she says.

Which begs the obvious: How long will they stay? “I really have no idea,” Anthony says. “But we expect to live in this one for awhile. The home really suits our needs, at least until we both get the itch to do it all over again.” 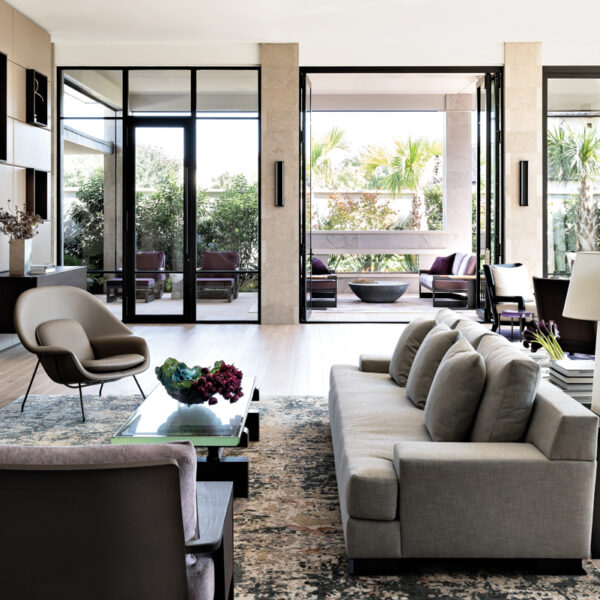 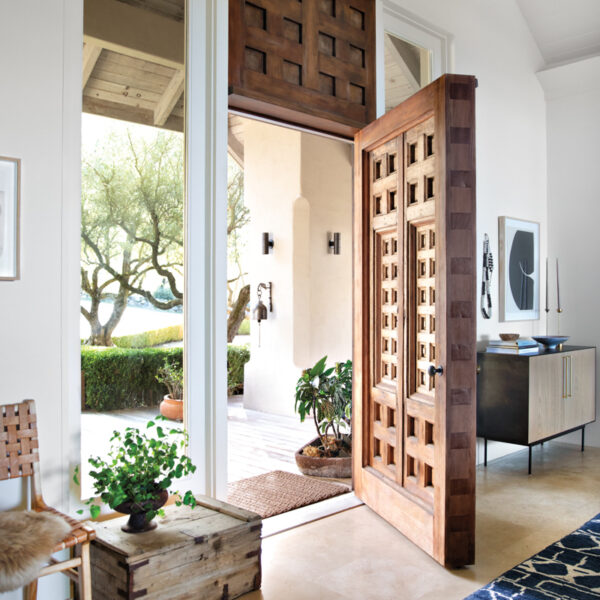 A Peaceful Hilltop Napa Retreat Puts The Focus On What Matters