“When working on this project I tried to use as much restraint as possible,” says interior designer Laura Lee Clark Falconer of the new family home she worked on in Dallas. “I didn’t want the design to be over-the-top because I wanted the architectural details to shine though.” And so, Falconer collaborated closely with both architect Robbie Fusch and builder Bob Thompson to deliver a stylish French neoclassical dwelling.

From the exterior, the house, with its ornate limestone façade and steeply pitched slate roof, looks like a château in the Loire Valley. “All of my design inspiration comes from my travels in Europe,” says Fusch, who frequently flies to France to purchase architectural salvage and building materials. “I always stay in château lodgings when I’m there so I can experience the architecture firsthand.” This shows through in the home’s details. For example, Fusch selected charcoal slate imported from northern Spain to resemble the roofs he had seen overseas.

Inside, all of the reproduction trumeau fireplace mantels and surrounds were made in France of locally quarried limestone. Fusch also incorporated antique elements where he could, such as the library’s fireplace bricks laid in a herringbone pattern. The remainder of the interior architecture—including smooth limestone floors, decorative wall and ceiling moldings, and elaborate pediments above each door or cased opening—painstakingly reproduces the real thing. Custom-made scrolled wrought-iron features, such as the staircase railing and wine cellar gate, are also typical of the Louis XV neoclassical style. “The clients wanted the front public spaces to be formal, reflecting the classicism that they love,” says Fusch of the central foyer, from which branch off the library and living room on either side, as well as the dining room. “Beyond that, they wanted their spaces more casual and family-oriented.”

This is especially true of the kitchen, where the light-hued cabinetry has a glazed finish for depth and open upper shelves for displaying a collection of pottery, pewter and glassware. The ceramic tile backsplash and stone-and- copper hood, as well as wrought-iron accents, make the kitchen feel informal, too. “It’s the heart of the home,” says Falconer of the kitchen and adjacent breakfast area. “The family uses it for all types of meals. The kids do their homework at the table, and there are a pair of comfortable armchairs for the parents to lounge and read the newspaper.”

Falconer, who had been involved in all decisions regarding materials and finishes, set about interpreting the owners’ wish list, which was to have a sophisticated yet inviting home. The clients also favored a neutral palette and wanted the furnishings to be in line with their new house’s French neoclassical architectural style. “I created interest by mixing in soft muted colors,” says the designer, who integrated furniture forever mindful of the neutral envelope. “I used mints, lavenders, apricots, golds and seaglass blues.” In order to keep the pastel palette from getting too sweet, Falconer made sure plenty of woven patterns and textural contrasts were found in the blend of custom and antique furnishings. “There are beautiful damask draperies, lots of patterned fabrics with both small- and large-scaled designs,” she says. “I also used chenilles, velvets, wools and linens for big upholstered pieces, but kept silks for throw pillows and window treatments, thus keeping things family-friendly.”

Art consultant Lisa Brown worked with the homeowners to build their contemporary artwork collection, which bestows vibrant color and transitional freshness to the traditionally appointed interiors. Accents abound with sophistication and glamour. But Falconer was sparing with the overall furniture layout, and she incorporated contrasting wrought-iron elements in order to prevent the décor from presenting as staid and stuffy. “I especially love the rustic yet elegant chandelier in the living room,” says Falconer. “It’s custom-designed to combine different materials. The iron makes it more casual, rather than having it be all gilt, which is more formal.”

Wrought-iron elements manifest themselves outside as well in the rear loggia as patio furniture and light fixtures. Landscape architect Harold Leidner hand-set the limestone flooring with a cabochon tile inset and perimeter band, picking up on the black hue of the window and furniture frames. “The outside flooring is similar to that in the entry,” says Falconer. “We wanted to give the family an extension of the home outside.” Adds Leidner, “It’s a very formal, classical and symmetrical French landscape, with clipped boxwood parterres and planted stone urns, completely in keeping with the home’s period architecture.”

In the end, the entire piece—both inside and out—came together beautifully. Says Falconer, “I feel like what we created for the owners is a sophisticated home that is also inviting for their family and friends.”

How An Ornate Chicago Penthouse Transformed Into A Chic Bachelor Pad 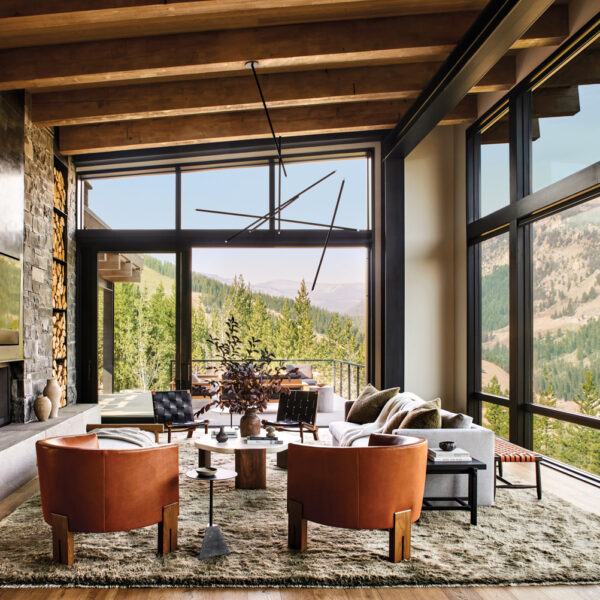