From the outside, it’s a grand Mediterranean-style home in Miami Beach. The barrel roof tiles, decorative columns and telltale bougainvillea vines creeping over various arched openings are all distinguishing features of the Mediterranean Revival aesthetic that made its mark in the area in the 1920s and ’30s.

But upon closer inspection, this 21st-century dwelling could be considered the architectural equivalent of an undercover agent, an operative of contemporary design infiltrating an esteemed neighbor- hood of historically preserved abodes: The embellished exterior that blends harmoniously into its surroundings also serves as a guise for its minimalist agenda. “Since the original home was historically significant, the city required that the new construction represent the same architectural style,” explains architect Kiko Franco. “The challenge was to incorporate the homeowner’s modern tastes.”

Arguably, the new dwelling’s simple street presence is a contemporary take on the traditional Mediterranean form. The rear exterior strikes a more classical tone with curved openings and a clear visual of the multiple gabled roofs laid with terra-cotta tiles imported from Bogota´, Colombia. However, the vast windows and glass railings that supply generous water views are elements of the indoor-outdoor rubric that defines modern design. “The house really captures and respects the South Florida landscape,” says Franco’s associate and project architect Jon Bonita, who is also referring to the region’s proclivity for tempestuous weather.

That said, part of the home’s modernity is owed to its innovative armor made of tough load-bearing masonry, muscular engineered-wood trusses and substantial hurricane-grade glass. The latter is especially paramount considering the home’s architectural apex, a decidedly un-Mediterranean 15-foot glass pyramid that crowns the living room. “At the time, it was the largest allowable skylight that met the hurricane-impact standards for South Florida,” explains Bonita. “It’s a unique piece that makes a spectacular statement.”

This sparkling zenith appropriately sheds light on the focal point of the interiors, a double-height living room that exhibits another aspect of modernism: symmetry. Identical suede-upholstered Christian Liaigre Brannan sofas flank the room’s main event—a soaring fireplace faced with textured limestone and rich sapele wood panels. The simple arrangement is an elegant iteration of the homeowner’s desire to keep the interiors minimal. By design, furnishings with sleek profiles don’t detract from the home’s true conversation pieces.

“The homeowner didn’t mind the Mediterranean style outside but insisted on a more contemporary South Beach look inside,” says interior designer Louis Shuster, who worked with designer Eric Dyer to realize the project. “We focused on creating subtle details and clean, linear surfaces,” adds Dyer.

The dining room intentionally functions less for feasting than for exhibiting wine. A translucent cellar-like fixture showcases rare vintages, while a lead-crystal dining table seems to dissolve into the sophisticated vignette. This disappearing act simultaneously accentu- ates the clear wine enclosure as it exalts the sepia-tone work from the homeowner’s collection framed within the buffet.

Here, creating a niche to display art is the exception, not the rule. Throughout the house, the collection is mostly exhibited gallery-style on plain walls. The pieces dominate their surroundings, underscoring the value of minimalist accoutrements. However, in the master suite and family room—where furnishings were kept simple, neutral and streamlined—large bare windows expose their own hidden agenda by quietly diverting focus from the attention-getting, water-themed wall hangings to the real aquatic spectacles: an infinity pool and ocean-fed bay glistening in the distance. 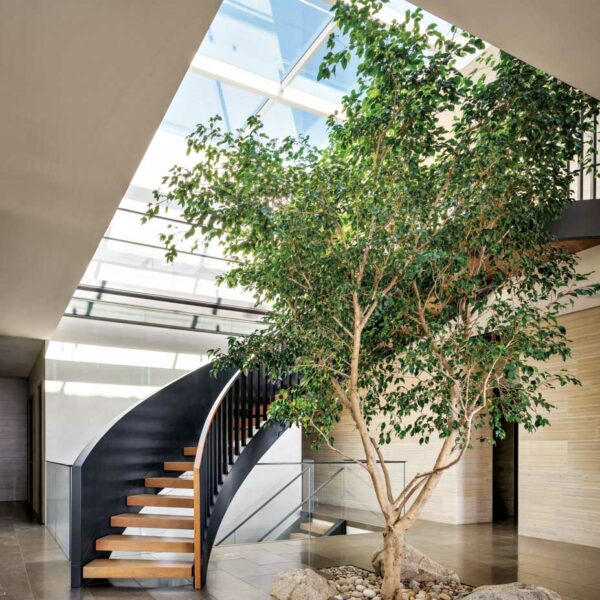 Find Zen In This Manhattan Beach Retreat Centered Around Nature 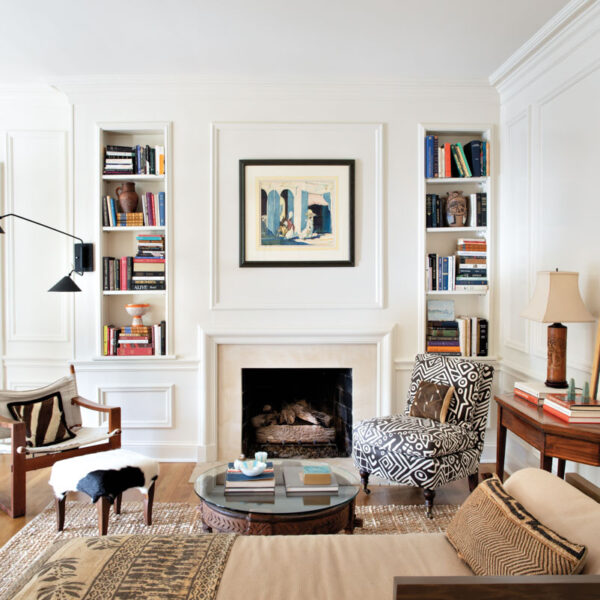 Be Inspired By The Fresh Look Of This Historic Bronxville Charmer 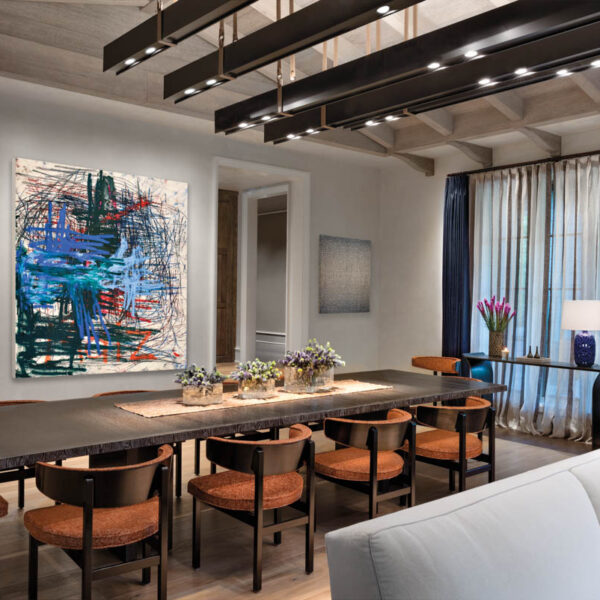 How Fabric Inspired The Look Of This Cosmopolitan Aspen Retreat