In The Agony and the Ecstasy, Pope Julius II (played by Rex Harrison) is frustrated with the slow progress of the Sistine Chapel ceiling. “When will you make an end?” he beseeches Michelangelo (Charlton Heston). “When I am finished!” replies the artist, who took four years to complete the commission. Far from the Rome of 1502, in the northeasternmost reaches of the Sonoran Desert, another artistic endeavor involving ecstasy (and likely a little agony) took 10 years to reach conclusion. The patrons here were a retired couple, avid decorative and fine arts collectors who desired a dream home complete with privacy and stunning panoramas. “It sits between two big washes that come together below us,” says the husband of the North Scottsdale site they purchased 13 years ago. “It faces southwest, so you see five ridges on a clear day and the spectacular Arizona sunsets.”

It was then that they called upon California-based design firm LeavittWeaver, with whom they’d built five other homes over 29 years. Principals Craig Leavitt and Stephen Weaver had handled the interior architecture on those residences, says Weaver, “But we wanted an architect with desert experience for the Arizona project.” The homeowners and designers interviewed several architects, finally settling on local talent Wendell Burnette.

“We felt Wendell was forward-thinking, detail-oriented and thought, as we do, about how each material meets another,” Weaver explains. “We developed a close working relationship and we all did better work because of our collaboration than either firm would have on our own.”

Burnette was inspired by the 2 1/2-acre site’s “decomposing granite boulders, many cracked open,” for the design of a courtyard house that rises from the desert, like the boulders, as “one mass that has been split, fractured, eroded from within and fallen apart on the land.” Major rock outcroppings were preserved and integrated into the design to help achieve this look.

The vaguely U-shaped house is made of materials that flow harmoniously one into the other: rammed-earth walls sit on a concrete plinth and are topped with Cor-Ten steel. Throughout are “fissures”—windows in custom shapes that let in cracks of light—except to the southwest, where pivoting glass walls (notably composed of plates as large as 12 by 14 feet) open the house completely to the landscape. The husband, adds Burnette, “had an affinity for triangular shapes, which made its way into the geometry of the house.” That shape is repeated throughout, such as in the steel ceiling, which folds down in parts like origami to create faceted forms; a triangular fireplace; and a tri-seat pivoting sofa custom-designed by LeavittWeaver.

“There wasn’t one thing about this house that wasn’t the most challenging thing you ever saw,” says builder Andy Byrnes, who worked on the home alongside project manager Merlin Ellis. To build the structure’s rammedearth walls, Byrnes first created a formwork constructed of wood and steel. Then, he explains, you add a dry mix of dirt and cement, “stand inside the form and ram it down with a pneumatic hammer, building it up a few feet at a time.” To make matters more complex, the exterior walls are battered on the outside by three degrees and are wider at the bottom. Full-scale mock-ups were required, says Weaver, “to resolve these complex issues.”

Then there was the question of furnishings. The husband is a longtime aficionado of Frank Lloyd Wright and sits on the preservation society of Fallingwater, so he already had a predilection for built-in furniture. The homeowners also often entertain large groups, so open floor space was another primary objective. To resolve this, Leavitt and Weaver designed mechanized pieces that either serve versatile functions or move out of the way, such as the coffee table, which can adjust to dining height but also shift away from seating horizontally to act as a buffet table. A triangular sofa pivots from inside the living room onto the terrace.

“Every seat or table mechanism in this house is engineered to reassign space use or allow access to space previously unavailable,” says Leavitt. The actual forms of the furniture, adds Weaver, “blend elements of three of our main design directions: our origami pieces (folded aluminum shapes); fuselage pieces, which are inspired by the ribs and framing of aircraft, ships and the human body; and pivoting pieces.” The palette is earthy, like the views, and dotted with islands of color. 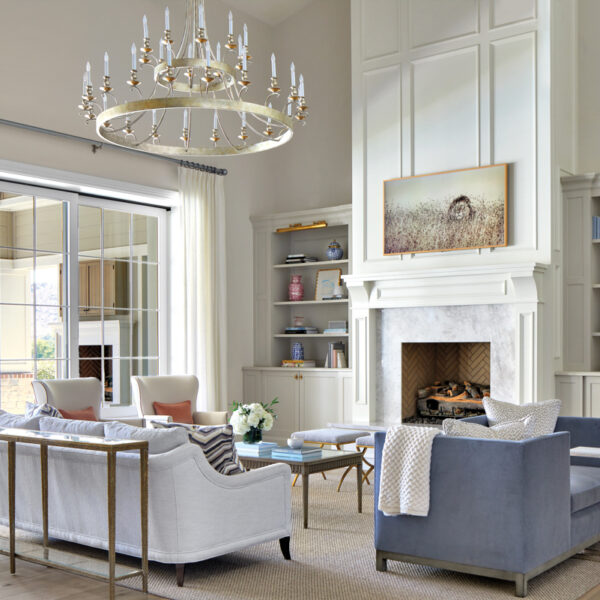 How A Perfectly Crisp AZ Retreat Became The Ultimate Sanctuary 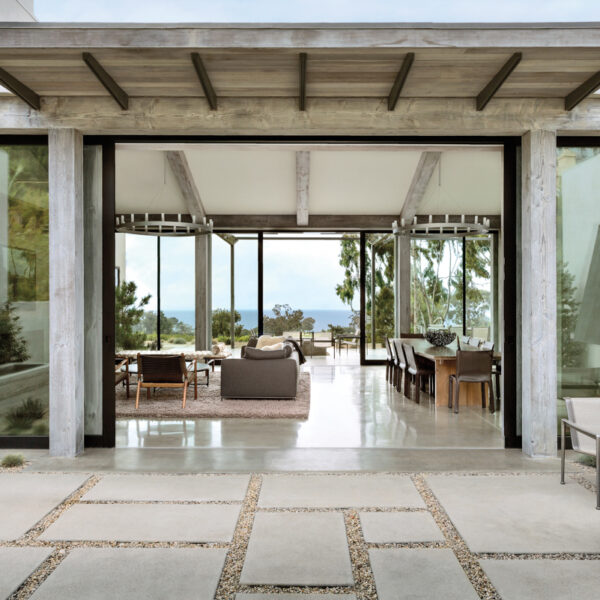