What could induce a suburban couple ensconced for decades in a red-brick, center-hall Colonial to acquire a minimal midcentury modern residence on 7 acres in Baltimore’s rural Greenspring Valley? The usual answers applied: for the challenge; because we’re fascinated; to make a change. But basic to their decision was the urge to experience a modern perspective—a move that required a leap of faith.

The wife, a mother to three teens, knew on their first visit to the house that her husband, a surgeon, loved its sleek textbook modernity. “He was into it from the start,” she remembers. “Jay Jenkins, the designer we’ve used forever for our homes, was on board, too. He said to me, ‘Trust me, this house is a 10.’ That’s when I realized, ‘Maybe I’m just not seeing it?’”

To her credit, the wife returned for another walk-through, where Jenkins explained how the right furnishings could warm the spare interiors. “A historically correct installation of midcentury furnishings isn’t necessarily the way to go,” he told her. “This house is perfect for a fresh overlay that pays homage to its origin.”

Landscape architect Carol Macht, who worked alongside associate Om Khurjekar, described how landscape changes could also enhance the architecture. “The grounds could better show the quality and intent of the structure,” she explained. “The approach road could reveal the house in a more flattering sequence. This house is a modernist masterwork. We should bring the landscape up to its quality.”

Their observations were convincing. Qualms aside, the couple committed to a refurbishment of the interiors, grounds and pool area. They learned that architect Charles H. Richter, of Charles H. Richter & Associates, designed the house in 1965, inspired by the “less is more” school of Le Corbusier and Mies van der Rohe. “Simplicity was my goal, and a connection to the outdoors,” Richter explains. “In a house like this, you live in spaces, not tight rooms, in order to expand your view of the world.”

Jenkins honored Richter’s work by introducing furnishings that respect the interiors’ openness, scale and lack of ornament. “The midcentury modern influence led us to edit for a concise look,” he says. “The furniture is spare and rectilinear. Fabrics and carpets are secondary to the architecture and placement of art.” The color palette mirrors the architecture’s black, white and brown. Accents of orange, a midcentury trend color, appealed to the wife, particularly after she acquired a Stephen Sprouse textile to hang in the entry hall. Jenkins suggested orange leather ottomans to surround the oversized entry table. “What woman doesn’t respond to a brown and orange box?” the wife jokes. “It’s like getting a present from Herme`s.”

The iconoclastic configuration of rooms in the house was an exhilarating challenge for Jenkins. “An entry hall this big—soaring to skylights 20 feet above—demanded a statement presentation,” he says. “I made it a gathering area that can morph into a grand place to dine and celebrate.”

The living room, with its three conversation areas and several doors leading outside, exemplifies the midcentury International style’s embrace of spatial flow. “I did separate treatments, all linked together but functioning well for different-sized groups,” Jenkins says. Throughout, he tailored his approach to the rigorous historical style with a consideration for how his clients would enjoy it.

The family lived in the house for six months before it was fully furnished, adjusting to the switch from their traditional past. They returned from vacation just as Jenkins completed the installation, revealing a fresh, modern perspective on a classic midcentury design. “There was a fine line between being faithful to the past and referencing it respectfully,” the wife says. “Jay did justice to both, and made us very happy.”

A ‘70s Ranch-Style Houston Home Transforms Into A Boho Paradise 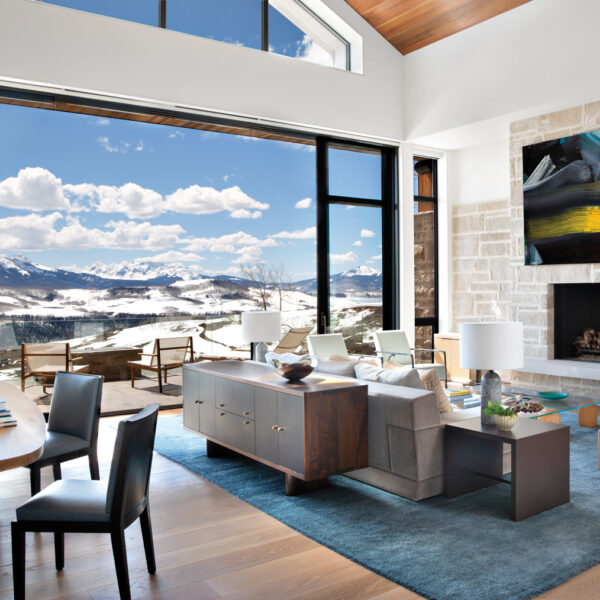