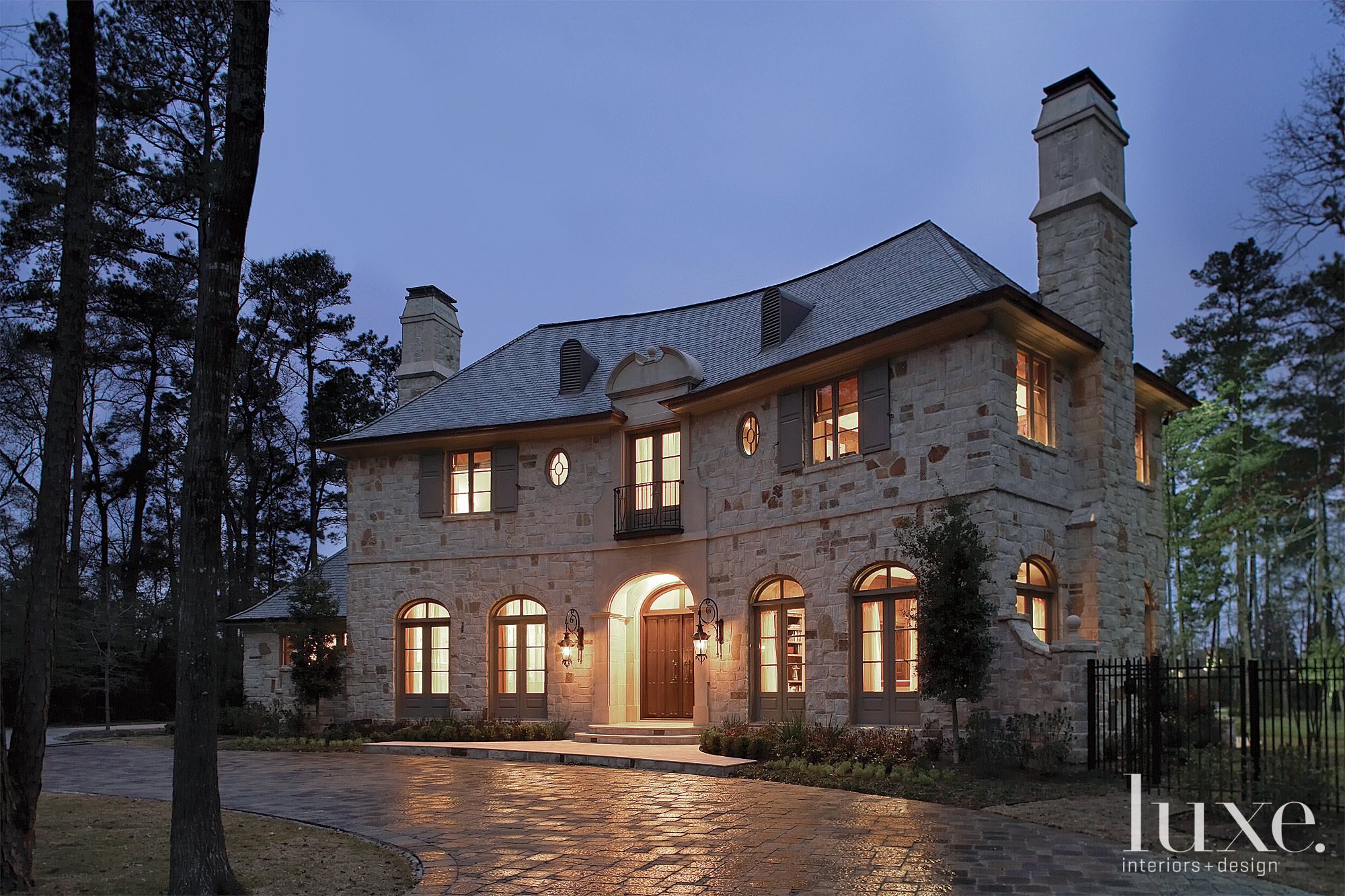 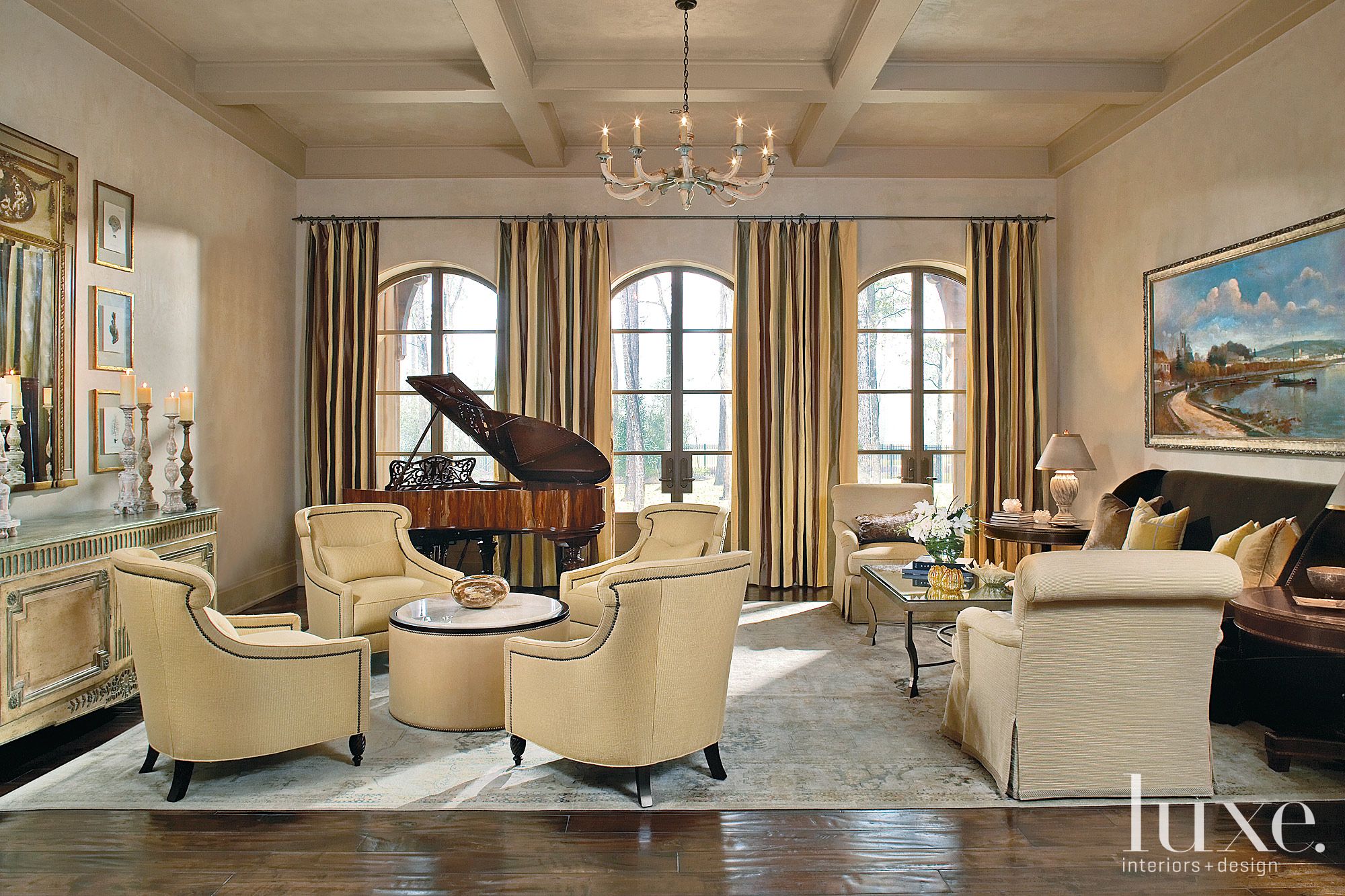 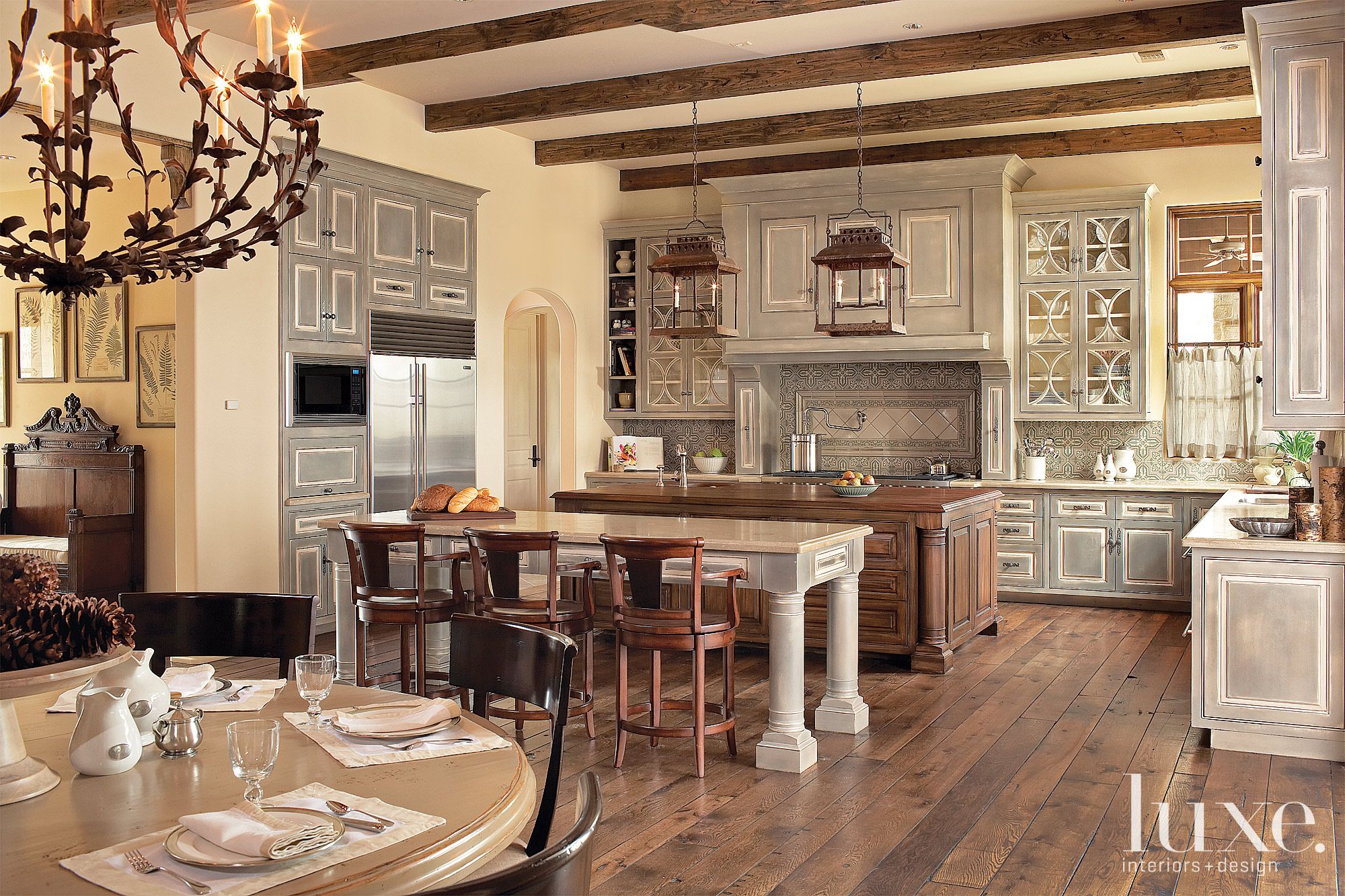 A decorative backsplash and refined cabinetry create a stunning look in this kitchen.

A decorative backsplash and refined cabinetry create a stunning look in this kitchen. 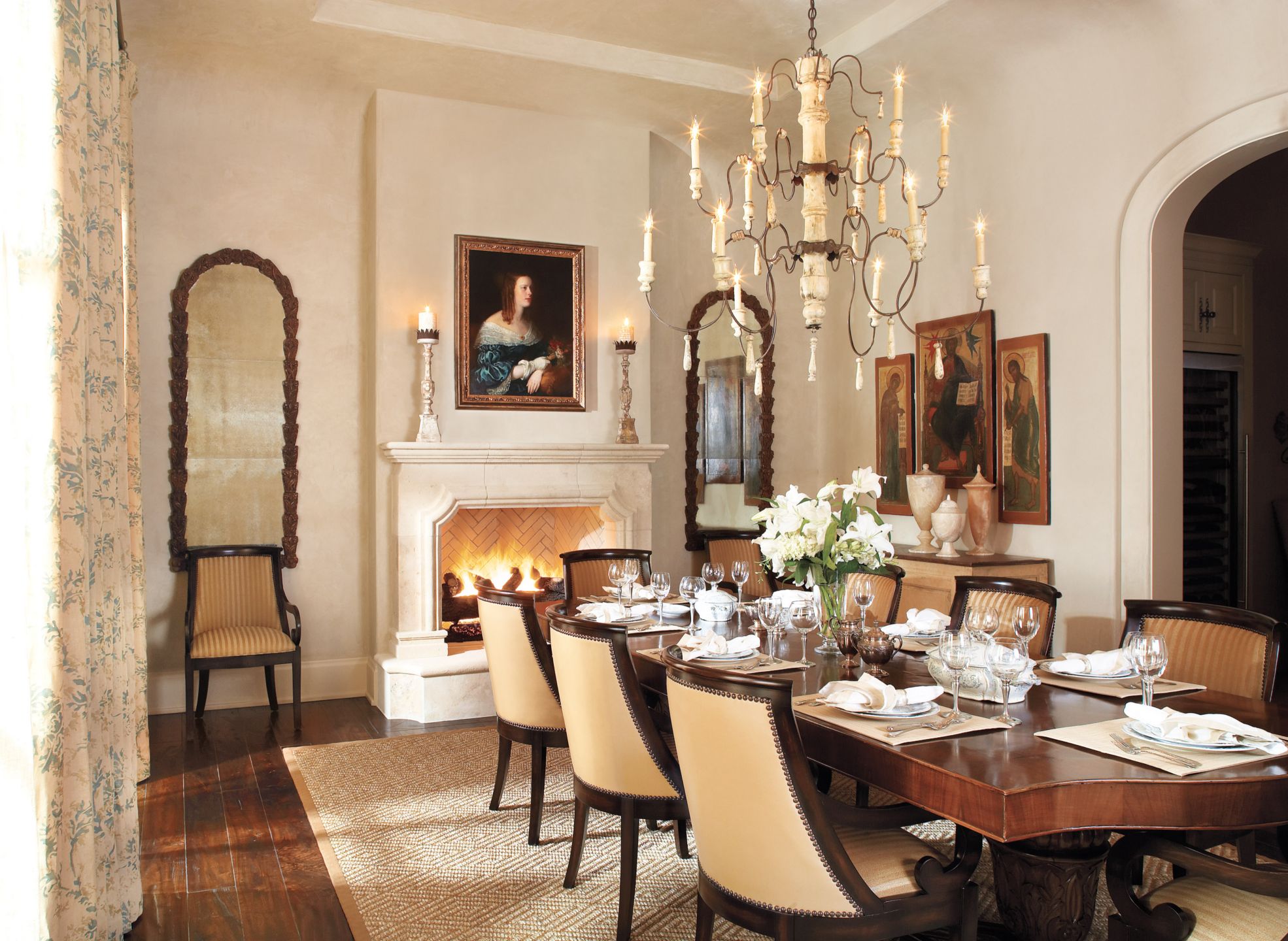 An Italian wood-and-iron chandelier takes its place above the table in this formal dining room.

An Italian wood-and-iron chandelier takes its place above the table in this formal dining room. 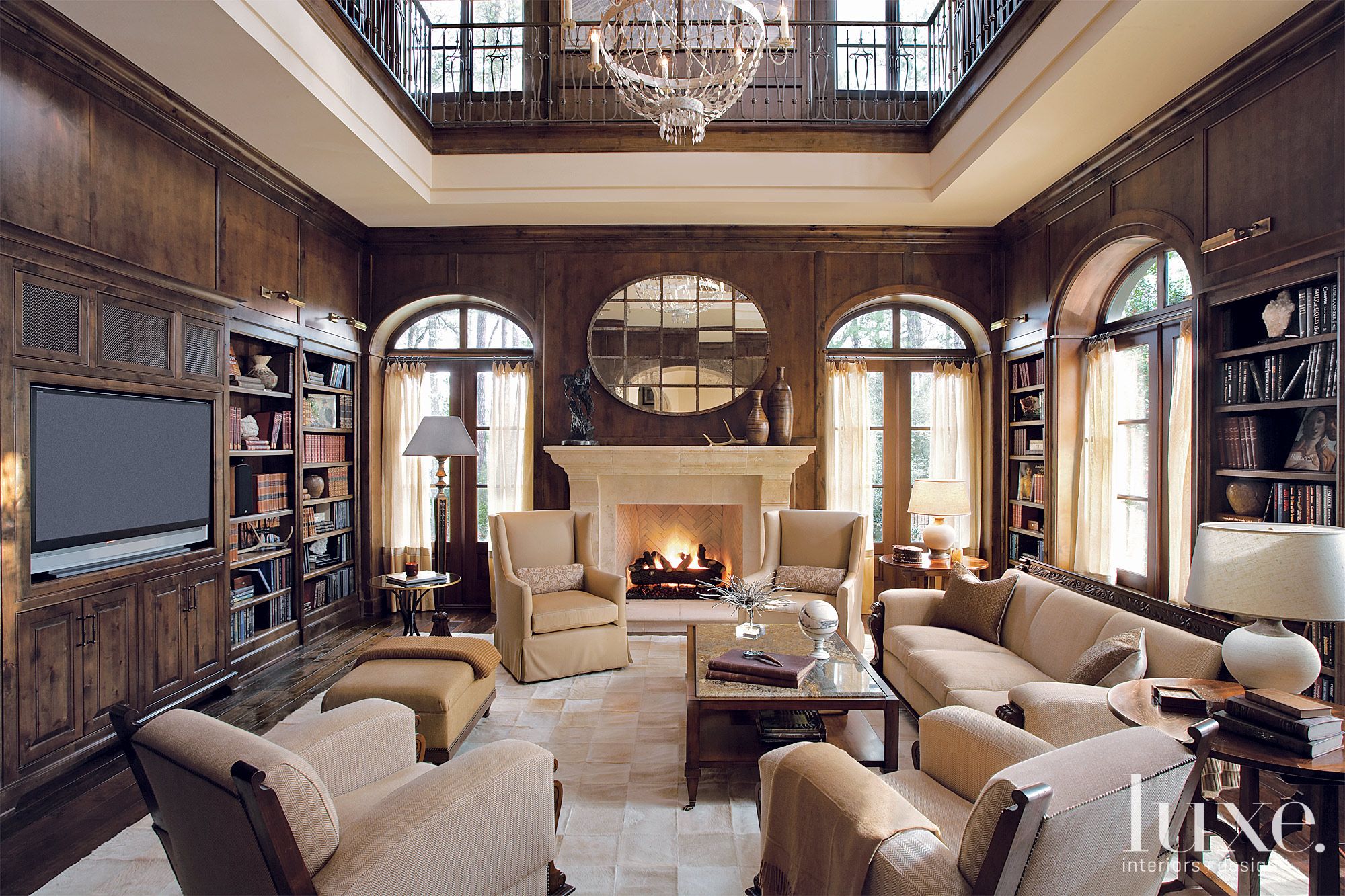 Books line the wood walls of this comfortable and spacious library.

Books line the wood walls of this comfortable and spacious library. 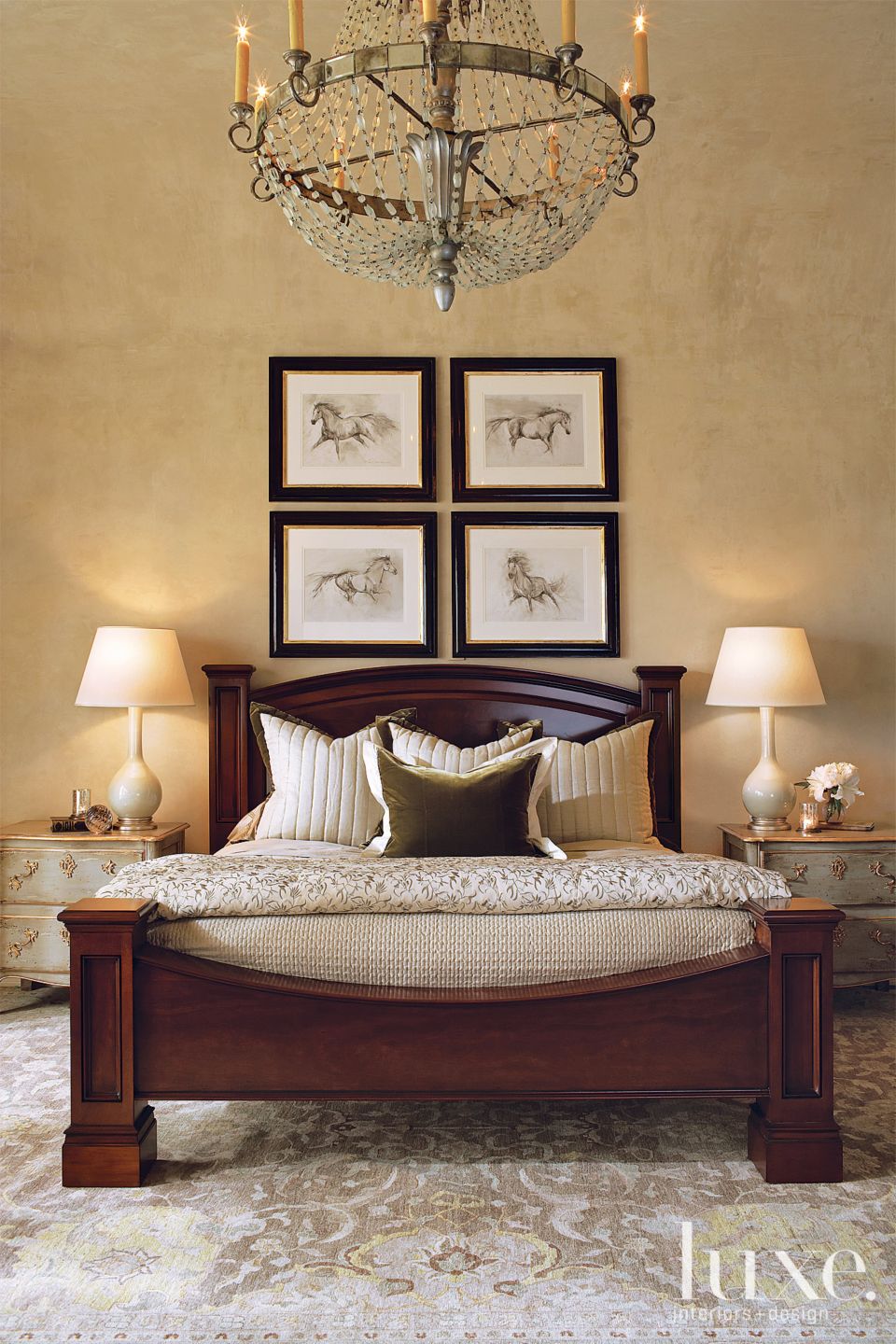 Painted chests and plaster, faux-finish walls give this bedroom a romantic touch.

Painted chests and plaster, faux-finish walls give this bedroom a romantic touch. 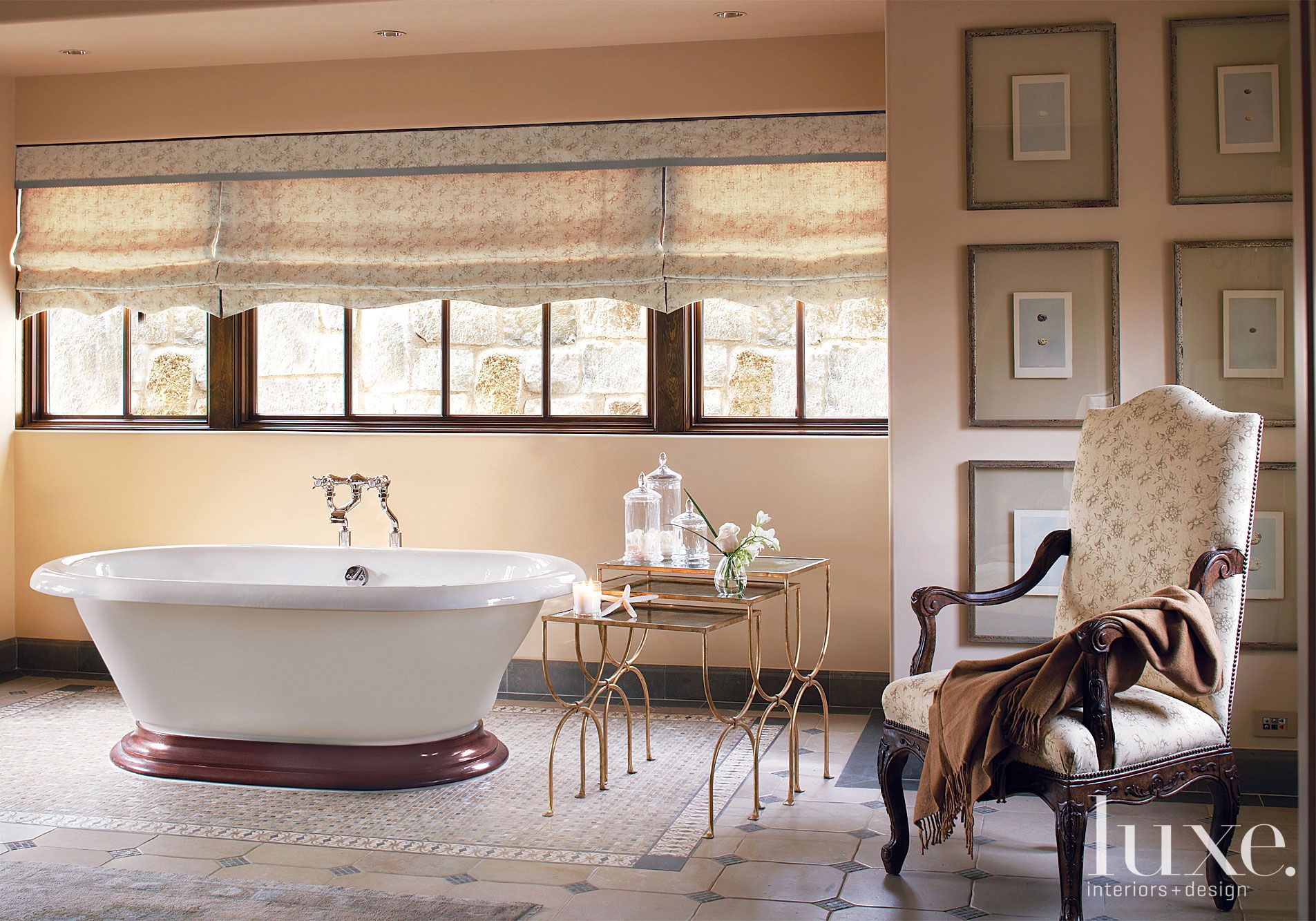 Muted colors provide a relaxing atmosphere in this master bath.

Muted colors provide a relaxing atmosphere in this master bath.

Try as they might, the couple just couldn’t put a finger on what they were looking for. After walking through what seemed like every existing home and build site on the market, “what we found was that we had very definite ideas about what we didn’t want,” laughs the wife. That changed the day her husband toured an under-construction residence that felt like, well, home. But, still, “it was the flow of the house that I liked,” he recalls, “rather than the design.” A conversation with the architect, Reagan Miller, a principal of Houston-based Miller Dahlstrand Architects, ensued. “He spent a lot of time listening to the kind of house we imagined with regard to the way we wanted to live,” says the husband. “That let us know that, with him, we’d get what we wanted.”

Selecting their interior designer, however, required no effort—she was there all along. Marjorie Slovack, principal of Slovack-Bass Design in Houston, was already a familiar face, having worked on their previous home. “Her personal tastes are very much like our own,” says the wife. “Muted colors, nothing ostentatious, very organic. The relationship we have with her is great.”

The high comfort level the couple shared with the designer and architect— always critical in a project of this size and scope—was even more keenly felt in this instance: The family’s former residence was destroyed in a fire. “Restoring their home for them, physically, mentally and emotionally, was very important to me,” says Slovack.

The team’s first task was identifying what the home would actually look like. Acknowledging the architectural details the clients were drawn to, Miller designed a graceful home with a gently bowed front façade, inspired in part by British architect Edwin Lutyens’ famed Greywalls estate. “They wanted a casual house with some formality,” says Miller. “That led to a French Normandy style, with a nod to Lutyens as well as to the work of American architect Robert McGoodwin.”

“We used limestone on the exterior, in addition to half timbering, stucco infill, a slate roof and copper gutters,” continues builder Michael Sanvido, of Omnilevel Custom Homes in The Woodlands. “The cast stone used on the front entrance was a major focal point.” The design is a perfect complement to the home’s site in The Woodlands. “Much of the concept came from the lot,” says Miller. “It’s somewhat of a peninsula, with a narrow throat that suddenly opens up to a pie-shaped parcel. The challenge was capturing the views while creating a welcoming entrance. The solution was a butterfly plan with wings on each side and a body in the center. The idea was that of embracing the front elevation.”

Slovack, with design associates Julie Veselka and Lauren Grumbles, continued that theme with thoughtful interiors that embrace the couple’s need for down-to-earth elegance with an emphasis on livability. “They are genuine, family-oriented people who wanted their home to reflect that,” says Slovack. “So we incorporated things they’re seriously interested in, like significant art and antique volumes. Nothing was done solely for the sake of décor.” And it works. Thoroughly enchanted with their new home, the couple has regained a sense of peace, security and contentment. “It is a retreat and a place for our family to gather,” says the husband.“It’s exactly what we didn’t know we always wanted.”

Inside A Soirée-Ready Bay Area Home With A Dazzling Entryway

A ‘70s Ranch-Style Houston Home Transforms Into A Boho Paradise