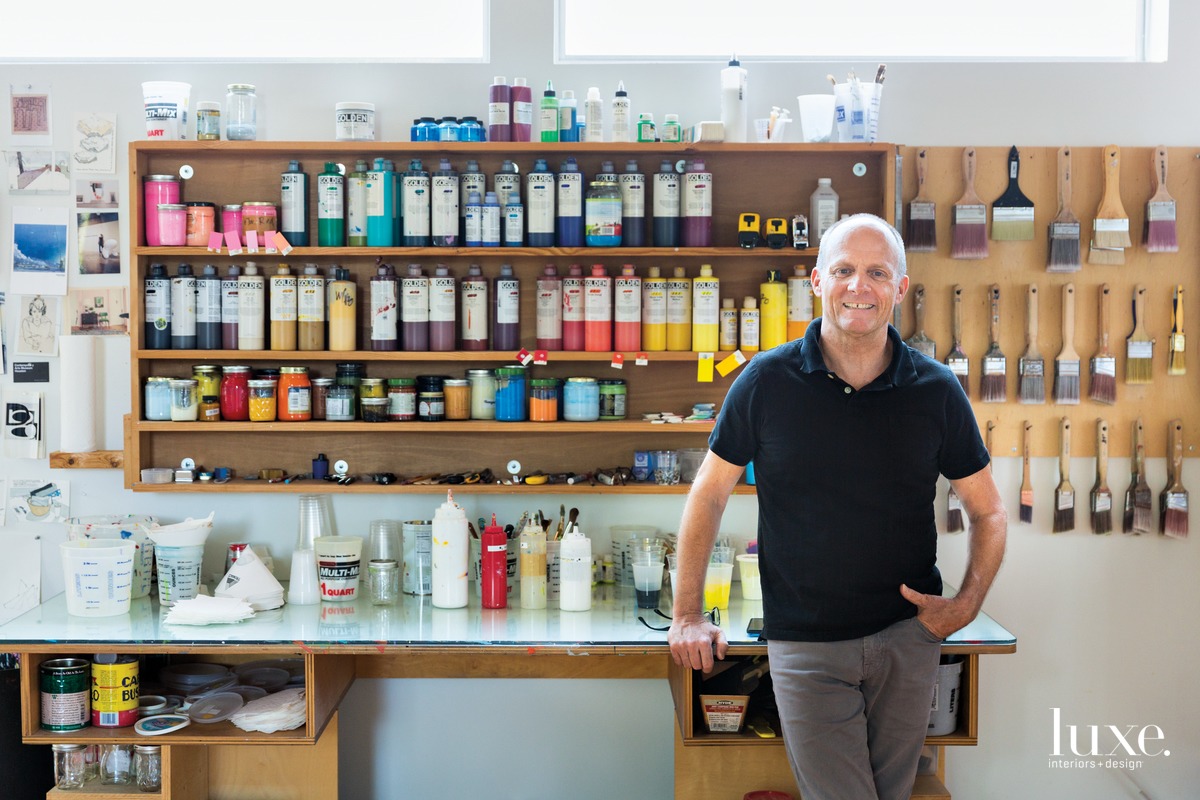 From the first Polynesian planks to today’s modern fiberglass totems, surfboards are more than just water-sport equipment for Houston artist Aaron Parazette. “They’re like sculptures,” he says. “They have an aura around them, with no detail too small to warrant attention.” This fusion of traditional craftsmanship with high-tech gloss resonates in Parazette’s hard-edge painting style–including word paintings that warp classic surfer slang terms into abstract lines, and geometric pieces that abandon conventional rectangles in favor of curvy, irregularly shaped canvas supports framing his razor-sharp compositions.

A lifelong fascination with surfing visuals is only natural for Parazette, who grew up steps from the ocean in Hermosa Beach, California. Along the way, he began to admire “Finish Fetish” artists like John McCracken and De Wain Valentine, who used surfboard materials like polyester and fiberglass to create machineperfect surfaces. Although working with canvas and paint, Parazette strives to create the same mechanical accuracy. “I often think of myself as a fabricator, conceiving of a painting and then making plans followed with care,” he says. 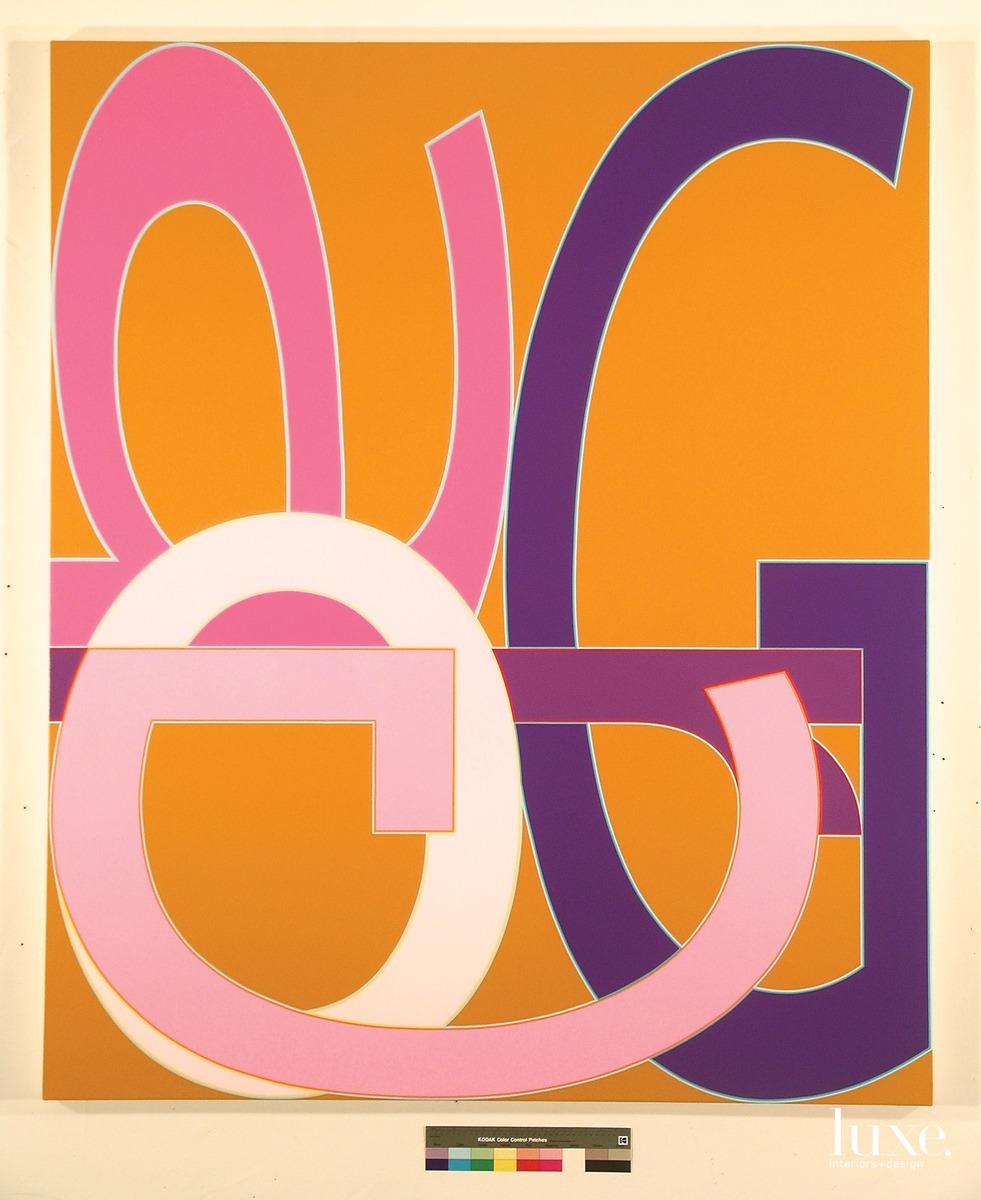 The word "Aggro," referring to a hyper-energetic approach to surfing a wave, appears in an acrylic on canvas.

The word "Aggro," referring to a hyper-energetic approach to surfing a wave, appears in an acrylic on canvas. 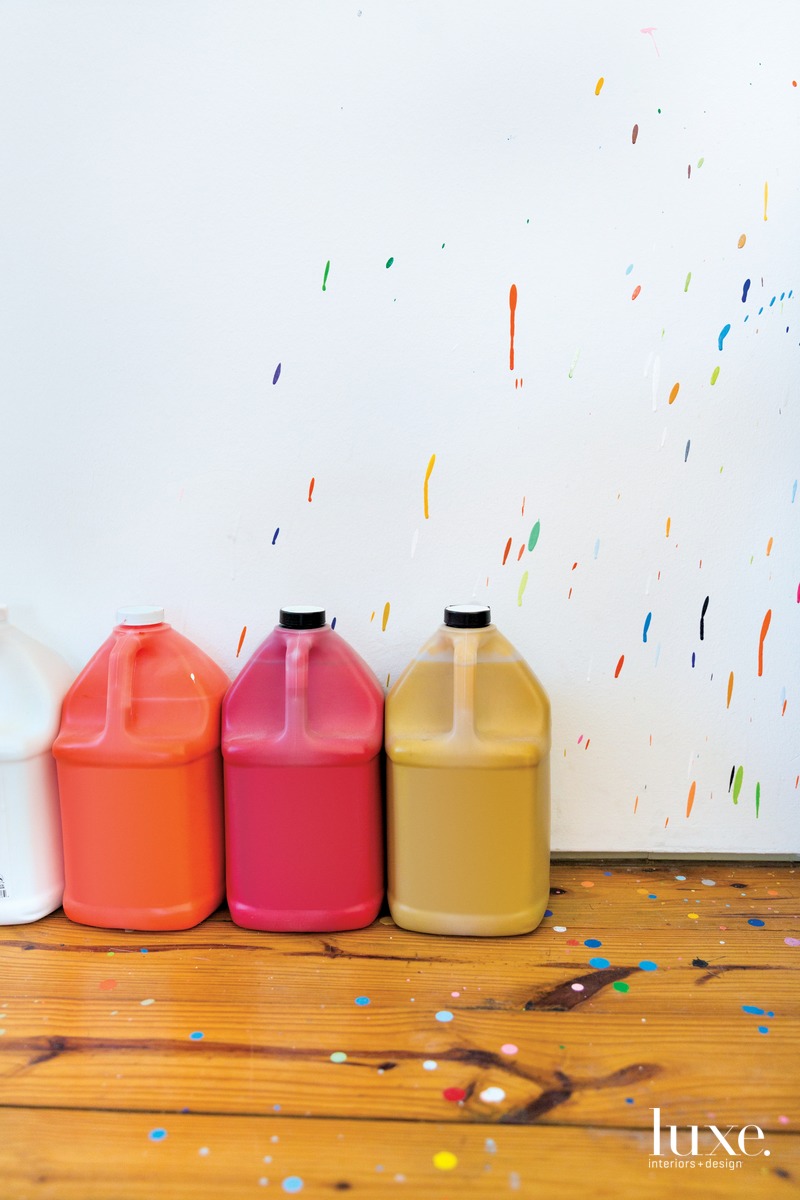 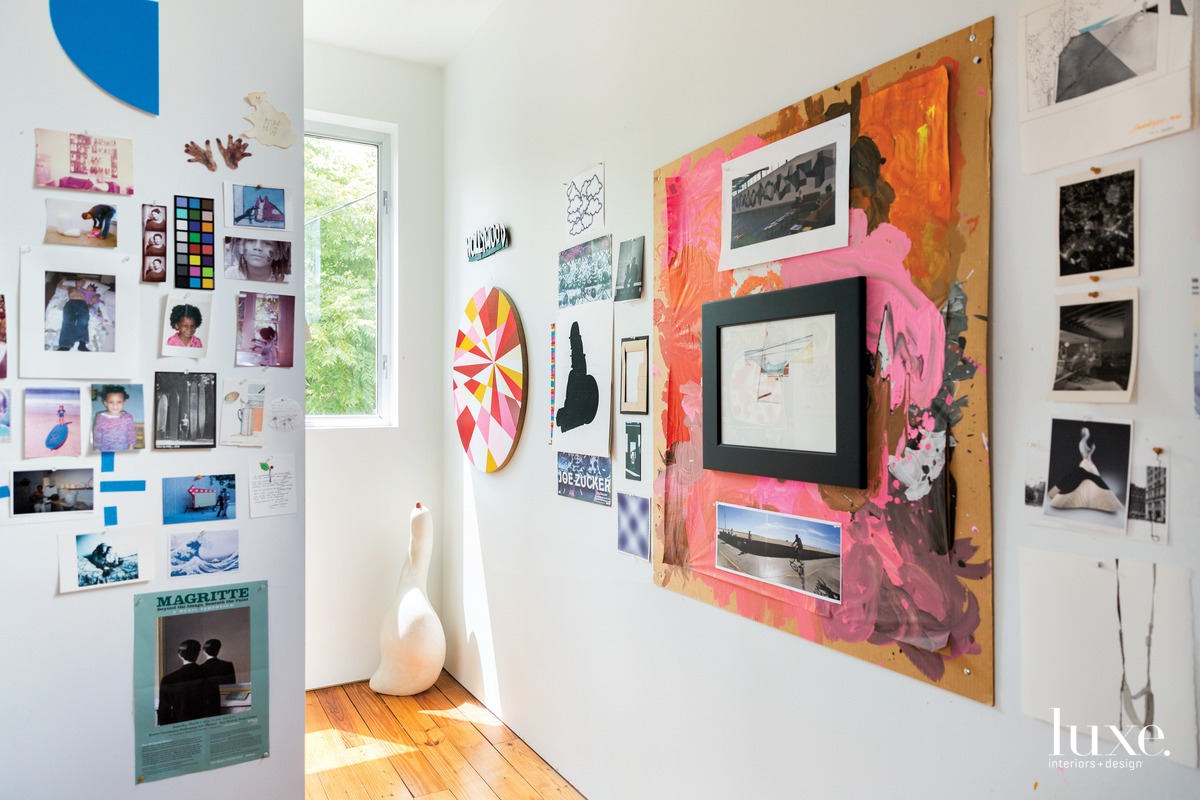 Items of what the artist refers to as "curiosity, affection, inspiration and admiration" fill his studio.

Items of what the artist refers to as "curiosity, affection, inspiration and admiration" fill his studio. 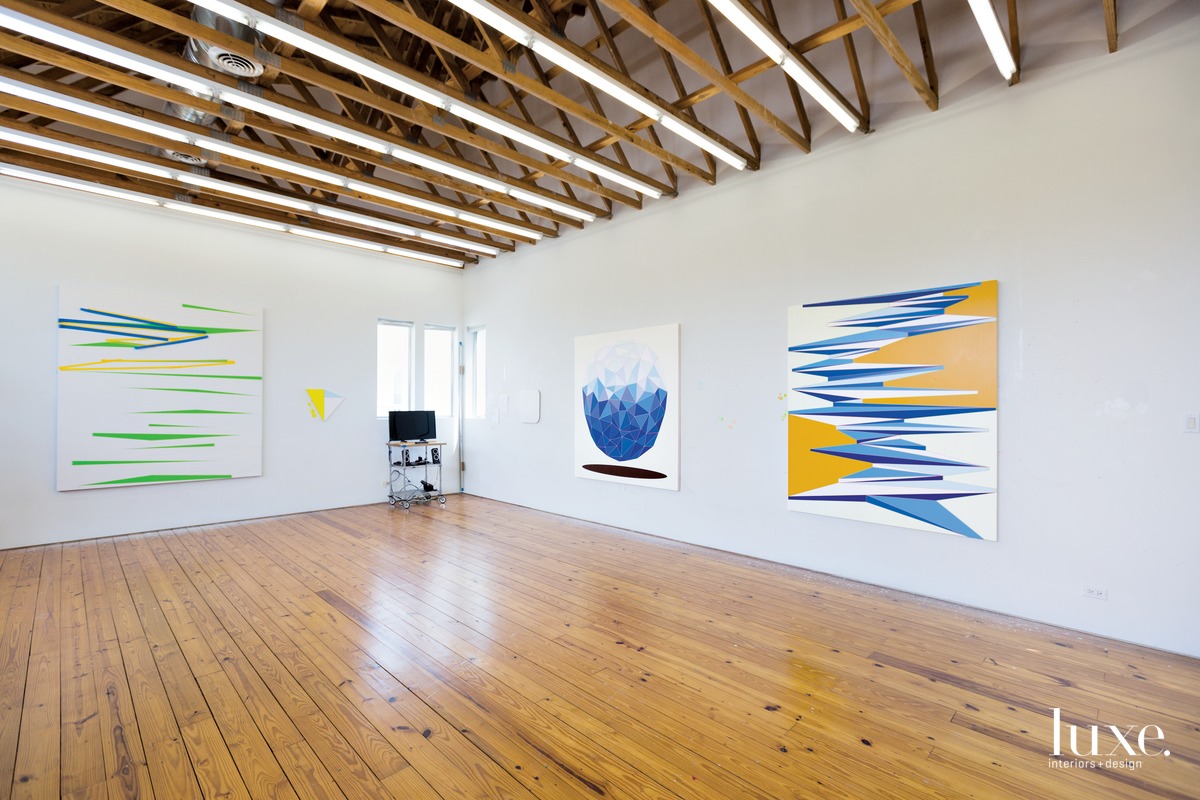 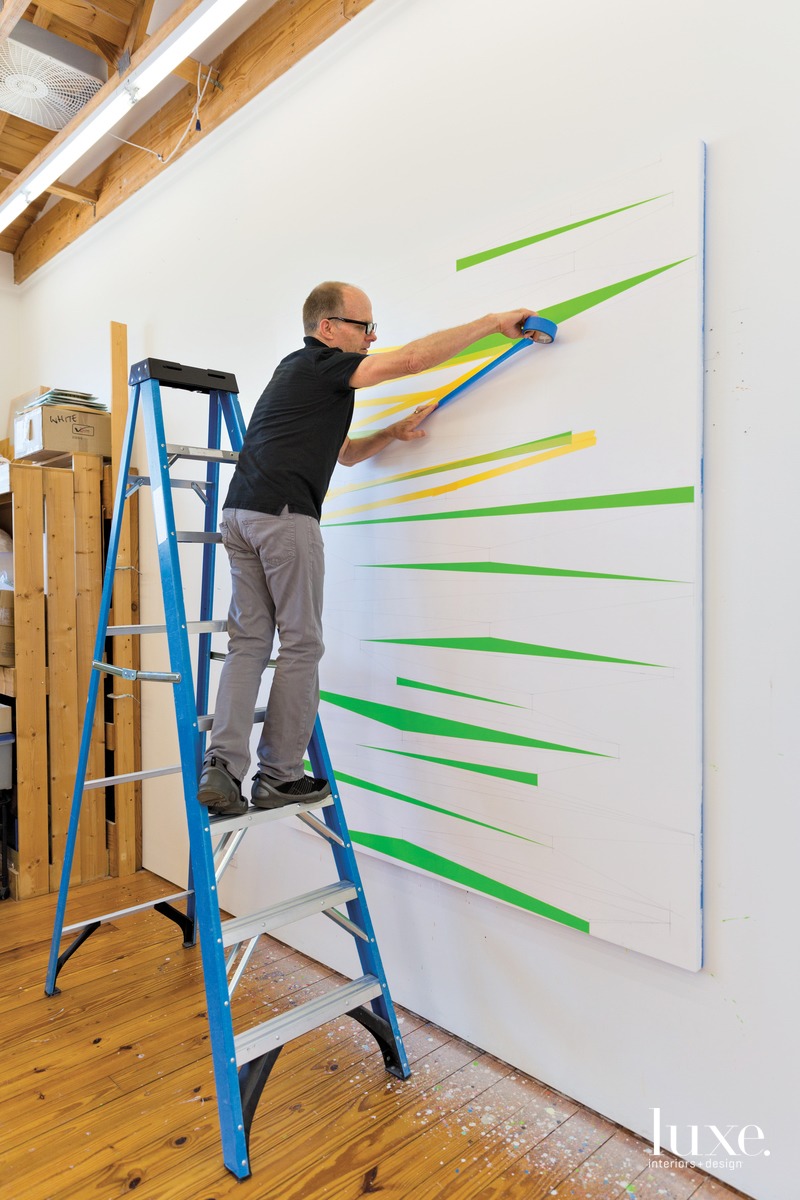 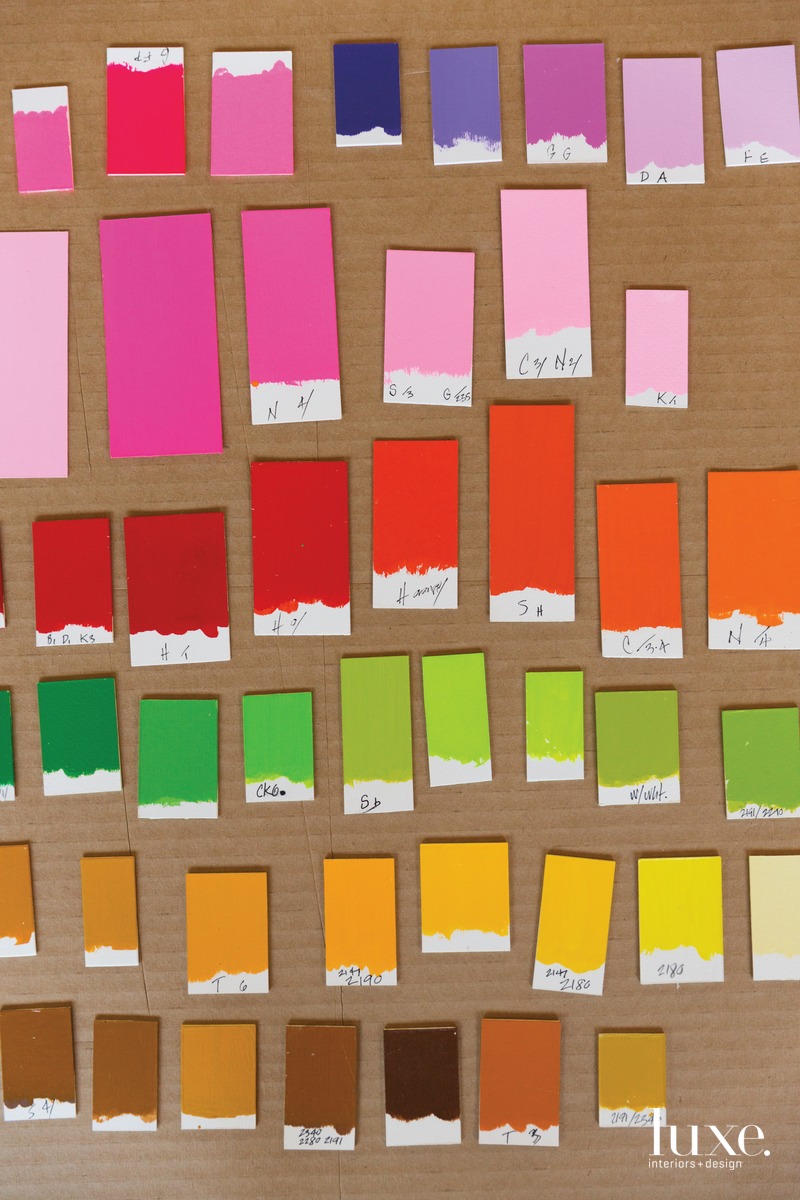 He also creates color chips by applying paint on a mat board for an accurate representation of how it appears when dry.

He also creates color chips by applying paint on a mat board for an accurate representation of how it appears when dry. 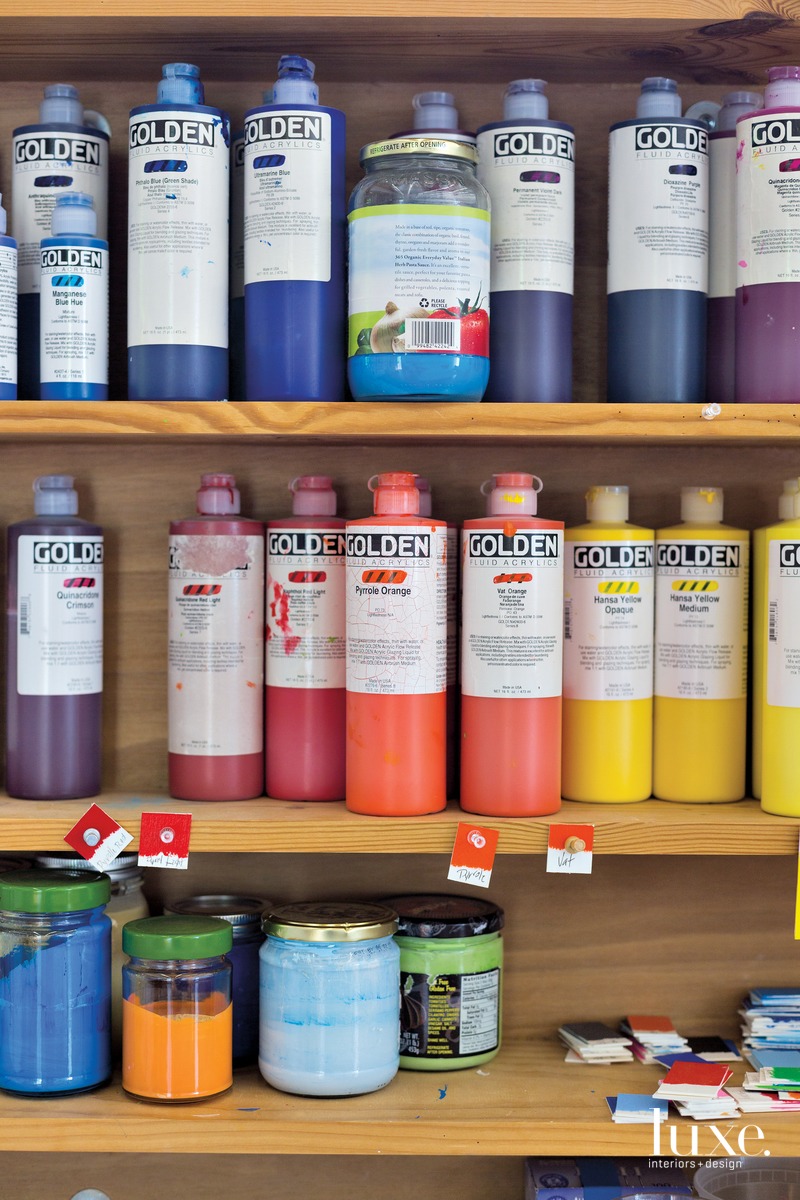 Parazette's paint of choice is Golden Fluid Acrylics, which he mixes to achieve the colors he desires.

Parazette's paint of choice is Golden Fluid Acrylics, which he mixes to achieve the colors he desires.

Parazette begins by creating his compositions digitally, manipulating letters and shapes in Adobe Illustrator to fashion geometric forms. He then projects the final draft onto the canvas, tracing the rough outlines before laying down masking tape to allow him to paint with precision. Magnified jewelers glasses aid in cleanly cutting tape and controlling layers of thin acrylic. The watery paint proves essential for reducing brushstrokes, he notes. “I want an anonymous surface,” he says. “It should look more like a decal than a painting.”

The artist’s distinctive hues often imply nature–a surfer’s dream of yellow suns and bright blue skiesbut are tweaked to flaunt the digital draft’s artificial brilliance. “We have been conditioned to see color from a backlit computer screen,” Parazette explains. So his goal is to capture that in an opaque object, using paint rather than pixels.

His focus on fabrication became more pronounced when developing his geometric paintings. “I realized the shape of the supports can have a life of its own and complement the painting,” Parazette says. To hold his geometric ellipses, parallelograms and rhomboids, he constructs plywood-faced panels, which he then covers with stretched canvas or linen. The result is a rigid surface that’s a step closer to a solid surfboard and sans the slight bounce of typical canvases.

Surfing subculture may seem a bit removed from Parazette’s current creative hub. After completing master’s degrees at California’s Claremont Graduate University, he and his wife, fellow artist Sharon Engelstein, moved to Houston in 1990 to join the Core Residency Program at the Museum of Fine Arts, Houston. Since then, the city has proven a fruitful home, offering him a professorship at the university and representation at McClain Gallery, where he and Engelstein will have a show in the fall. Talley Dunn Gallery in Dallas also represents him.

Though far from the Pacific coastline, Houston has shown deep appreciation for Parazette’s sleek surfing aesthetics. “The Space City has an affinity with the West Coast,” the artist says, referencing Houston’s innovations in aerospace technology that helped generate the surfboard’s plastic revolution in Southern California. It’s an inevitable link between two places that have always sought ways to reach the horizon.