With his children grown and out of the house, the owner of a popular local catering company realized he no longer needed a house full of “stuff.” So he traded it all in for the pared-down elegance of an Arlington penthouse filled with modern art. The first step was bringing designers Jose´ Solis Betancourt and Paul Sherrill on board to create the new minimal look, which takes its design cues from the building itself. The glass-clad Turnberry Tower, with its sweeping views across the Potomac River and the Georgetown University campus, set just the right tone. “You would expect to see something more contemporary here,” Solis Betancourt says, “and the owner was very much open to that style.”

The style also lent itself to the client’s growing modern art collection, which includes works by Ellsworth Kelly and Damien Hirst. “I really wanted it to look more like an art gallery and less like an apartment,” the owner says.

The designers, along with firm architect Nicholas Marcinko, reworked much of the layout to achieve that effect. The team started with a wall that ran from the rear of the unit to the floor-to-ceiling windows that span the balcony; the wall had previously cut the home’s dramatic views in half between the living room and an enclosed master suite.

“The main thing was removing the portion of the wall near the windows,” Sherrill says; that opened the living area to a gallery that morphs into a dining room for dinner parties. The master suite, in turn, became little more than a curtained niche for the owner’s bed. “It didn’t make sense to me to have a bedroom with a big sitting room—who’s going to see that,” the owner says. “I entertain a lot, so I wanted to make use of all the space.”

The design team shrank or disguised other utilitarian spaces, as well, as they crafted dramatic stages for entertaining. “We concealed a lot of the typical living functions,” Marcinko says. Doors in the foyer were disguised as metal-trimmed wall panels, while storage in the living room disappears behind custom built-ins. The once-open kitchen was hidden away, too. The owner, who is vegan, hardly uses it, and he generally hires his own company and other caterers to handle the cooking for dinners and cocktail parties. The new layout also enclosed a space off the elevator to create a vestibule punctuated by a hanging sculpture of crushed soda cans, a wry nod to the owner’s healthy lifestyle.

Inside, local artist Ryan McCoy’s enormous mixed-media piece anchors the living room, where Sherrill and Solis Betancourt chose vintage and custom furnishings with rich fabrics and metallic accents. “We wanted to introduce furniture almost like art—pieces that had a lot of character,” Sherrill says. They also installed floor-to-ceiling mirrored panels on either side of a 15-foot-long custom sofa to amplify the light and bring the city views deeper into the space. The living room’s raised alcove, which serves a dual purpose as an office and private dining area, gets the same treatment with mirrored panels on the back wall. “There is a lot of smoke and mirrors,” Sherrill jokes.

The theatrics extend to the turf-covered balcony, which serves as an elevated sculpture garden. “I wanted to have something out there that’s an extension of the art that I like,” the owner says, noting the metallic spheres that move with the wind so the display is different each time he looks outside.

Where he used to accumulate furniture, china and crystal, the owner says, art and sculpture are now his main pursuits. “At this time in my life, it’s such a nice thing to collect,” he explains, especially where his children are concerned. “Kids don’t really care what kind of furniture you have, but the art—everybody loves it!” 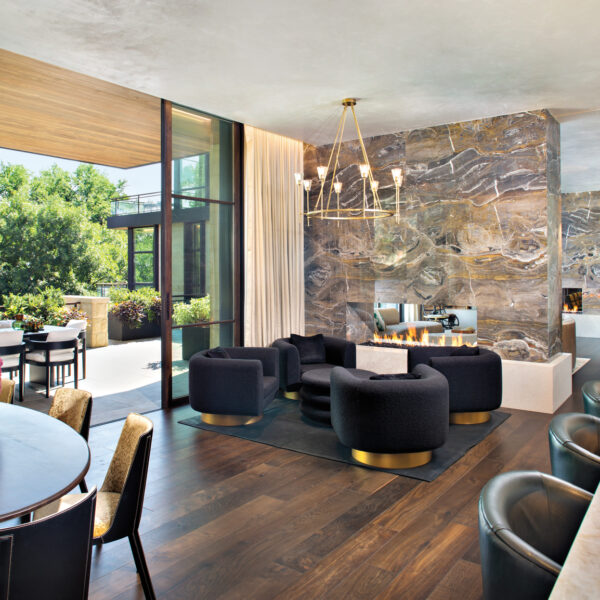 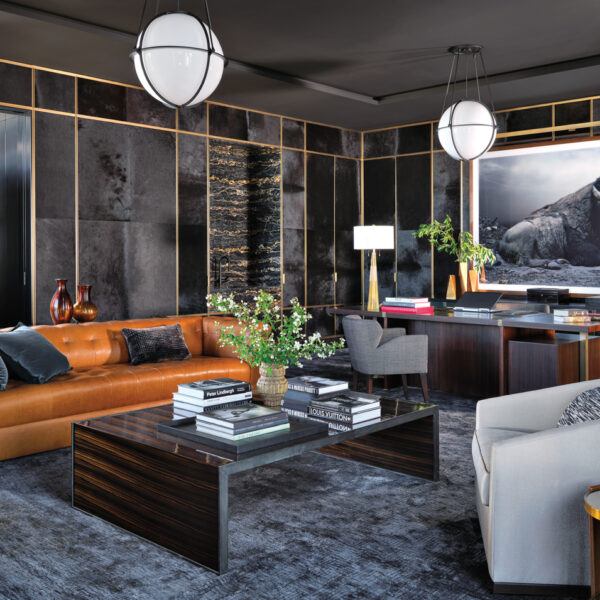