When a couple from Mexico City was planning to build a second home in Coronado, they looked in the opposite direction for inspiration—to the classic New England architecture of places like Martha’s Vineyard and Nantucket. “The phrase we use a lot is ‘coastal architecture,’” says architect Christian Rice, whose firm often works in that vernacular. “It’s derived from Eastern homes but looks appropriate here, too, because of the beachy location.” The couple, however, included one caveat: Because they favor contemporary architecture, they wanted an updated version of an East Coast classic. And Rice happily obliged.

To start, the architect tackled the somewhat unusual site. While most lots in the neighborhood are long and narrow, this one is the opposite, which meant the bulk of the building would be viewed from the curb. “Since we wanted to play down the size of the house,” Rice says, “we allowed a large existing pine to remain, which does a great job dividing up the front façade.” Rice then worked with traditional New England architectural elements—including gables and a columned porch—to help define the curbside exterior and complemented them with a more modern metal roof.

Although East Coast in style, this residence would be set within Southern California’s temperate climate, and Rice took full advantage of that opportunity. “Because of the way we live out here, a courtyard was the perfect element to incorporate,” he says of the large outdoor space he created by placing the L-shaped structure opposite a detached guesthouse and outdoor living area. With the touch of a button, retractable glass doors open the house’s main living areas onto this grand outdoor space.

Playing off the crisp architecture, designer Kellie McCormick, a partner in the firm with Robert Wright, carried the “bright, clean look” inside with a predominantly white-and-charcoal color palette. To keep things feeling cohesive in the core of the home, where the kitchen, dining and living areas are all open to one another, the designer utilized “different textures and small patterns within the same color family,” she explains. “Dark accents pop, and light colors keep it beachy and fresh.” A custom wool rug helps define the living area, as do low-profile ceiling beams, and traditional board-and-batten paneling lends texture and depth to the kitchen, where McCormick positioned a custom settee on casters for added function.

Because McCormick was designing for four children and two dogs, too, she “blended different materials with durability and longevity in mind,” she says of her approach, “while keeping everything very light and airy.” For example, in the dining area the designer chose Restoration Hardware host chairs upholstered with a linen-like outdoor fabric and selected a sturdy reclaimed Russian oak table. In the living area, McCormick covered tailored sofas with soft chenille and paired them with contemporary wing chairs to “add a more formal feel.” A large-scale drum shade hangs above the master bedroom, where McCormick kept to the same soothing palette by letting a charcoal-hued linen-upholstered bed stand out within an otherwise crisp white space.

Outside, landscape architect Katherine Stangle planted sturdy herbs such as rosemary, lavender, thyme, and bay laurel to create the “colorful, fragrant and low-maintenance” grounds the homeowners had asked for. In the central courtyard, Stangle added concrete step pads through the grass for easy connections between the house, pool and outdoor living area.

The whole project came together quickly. The process, from permitting to completion, took a mere 11 months. “The schedule was tight,” builder Lorton Mitchell says of the construction timetable. “It took a lot of coordination, but the clients made good, solid decisions and didn’t change their minds.” As a result, they got the bright and sunny retreat they were after. “It interweaves coastal and contemporary design,” explains Rice, “into one unique, cohesive and comfortable home.”

Be Enchanted By The Irresistible History Of This L.A. Home

Channel The Harmonious Feeling Present At This Lake Tahoe Escape 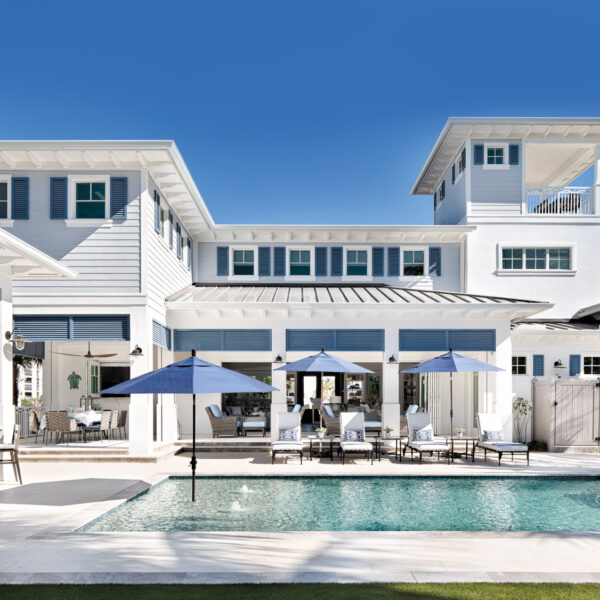