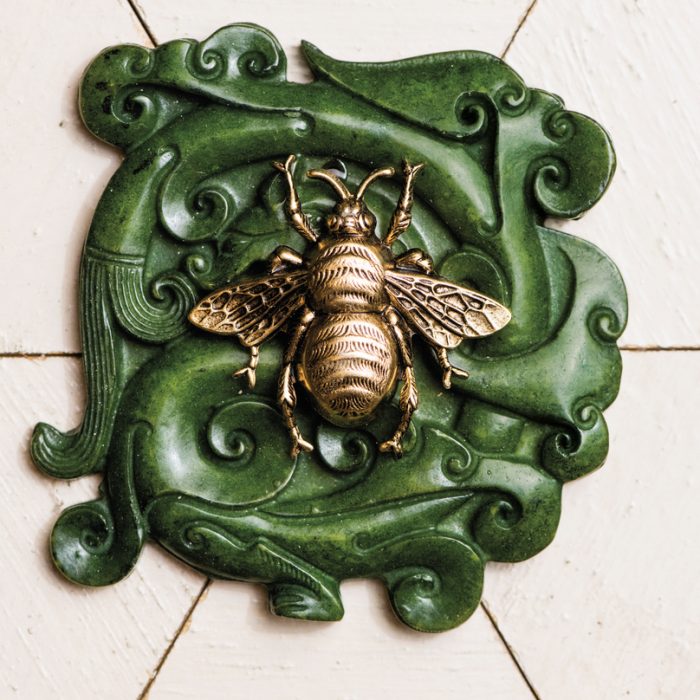 About 10 miles east of downtown Louisville, Kentucky, Trace Mayer Antiques brims with European furniture and artwork spanning the 1680s to the 1820s. At a couple thousand square feet, the shop is crowded with English chests from the 1780s and Chippendale pieces, French and post-Impressionist paintings and British West Indies items that nudge against unsigned artworks.

Amidst the findings, one area glistens with tiny treasures. A table surface is barely visible underneath dozens of containers overflowing with old broaches, pearls, compasses, marbles and various gilded ornaments. There’s a bowl of watch faces, collections of shells and, notably, piles of gold bee figurines. 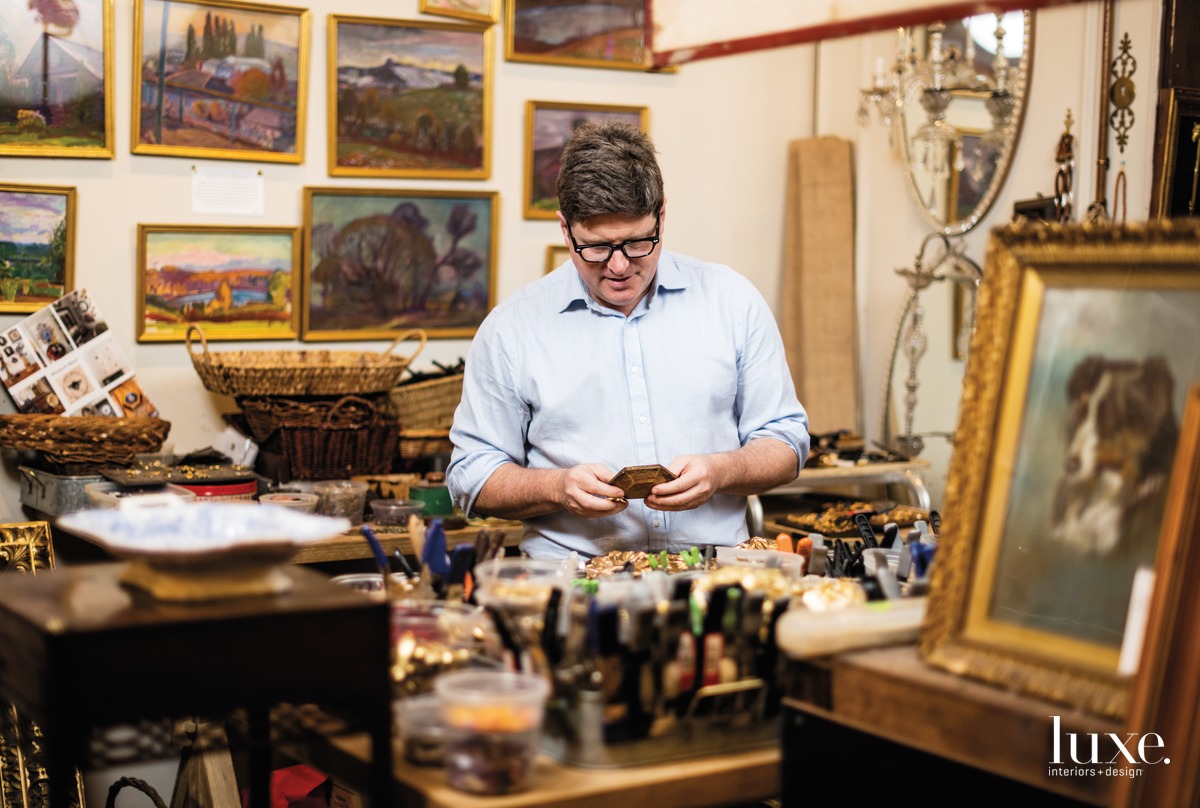 Kentucky antiques dealer Trace Mayer creates decorative works of art called Museum Bees from discarded frames, most of which are 19th-century American. Mayer is adamant about ensuring his work is accessible. "It's about creating a luxury good everybody can participate in," he says.

Kentucky antiques dealer Trace Mayer creates decorative works of art called Museum Bees from discarded frames, most of which are 19th-century American. Mayer is adamant about ensuring his work is accessible. "It's about creating a luxury good everybody can participate in," he says. 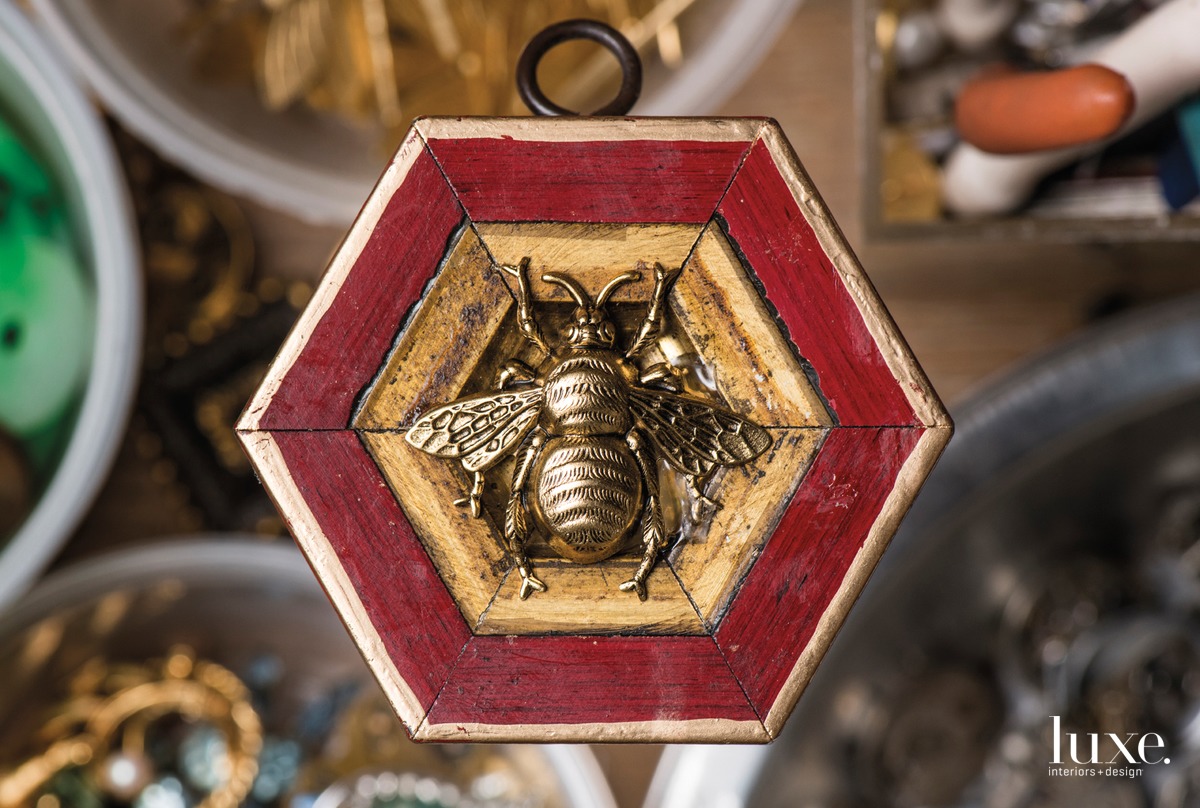 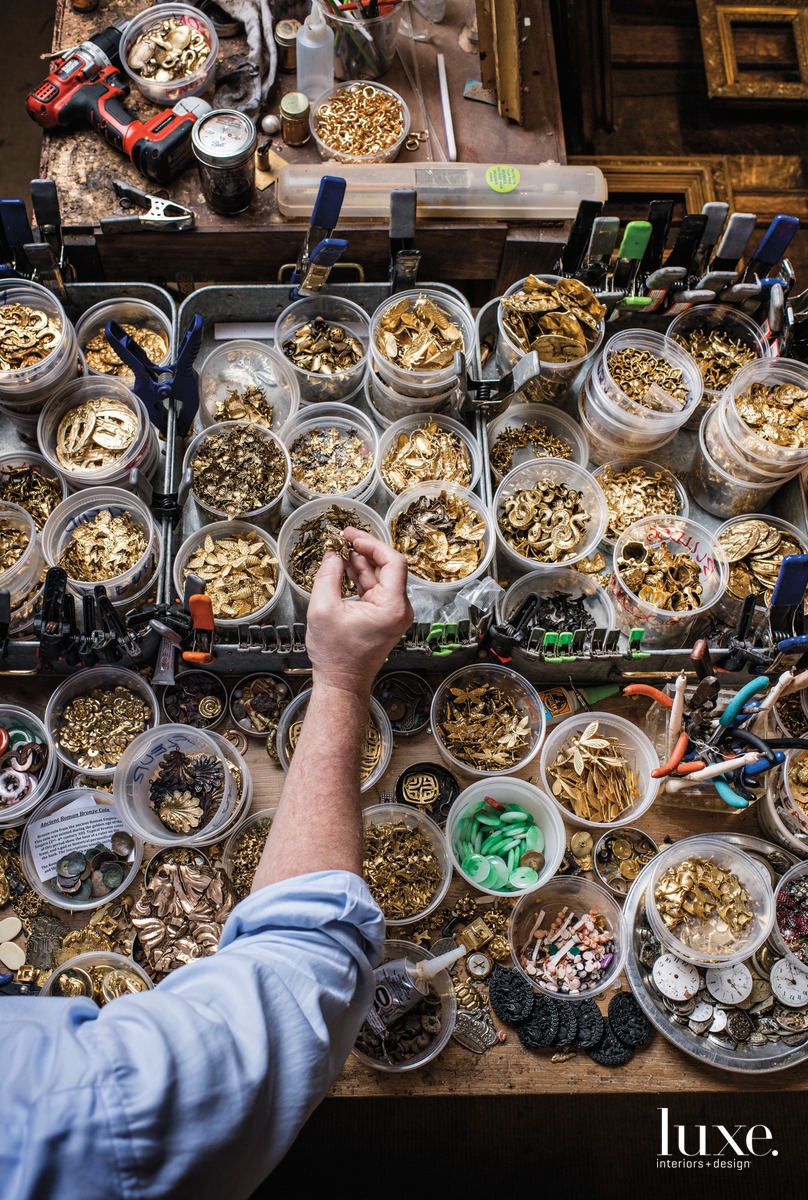 A table in Mayer's shop overflows with various items he uses to decorate the Museum Bees, including timepieces, gold figurines and gemstones. His working utensils include pliers, nail punches, paint brushes and even his daughter's knitting needles. "I'm constantly living with a knife in my pocket," he says.

A table in Mayer's shop overflows with various items he uses to decorate the Museum Bees, including timepieces, gold figurines and gemstones. His working utensils include pliers, nail punches, paint brushes and even his daughter's knitting needles. "I'm constantly living with a knife in my pocket," he says. 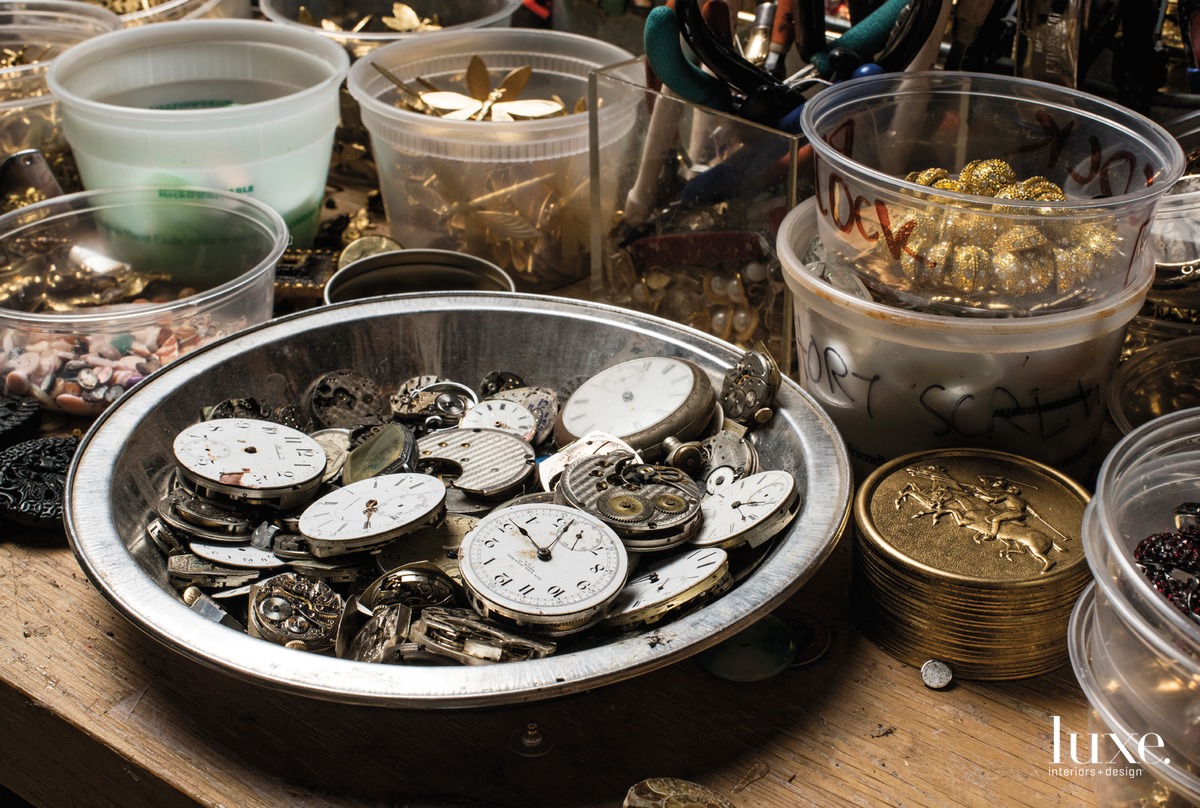 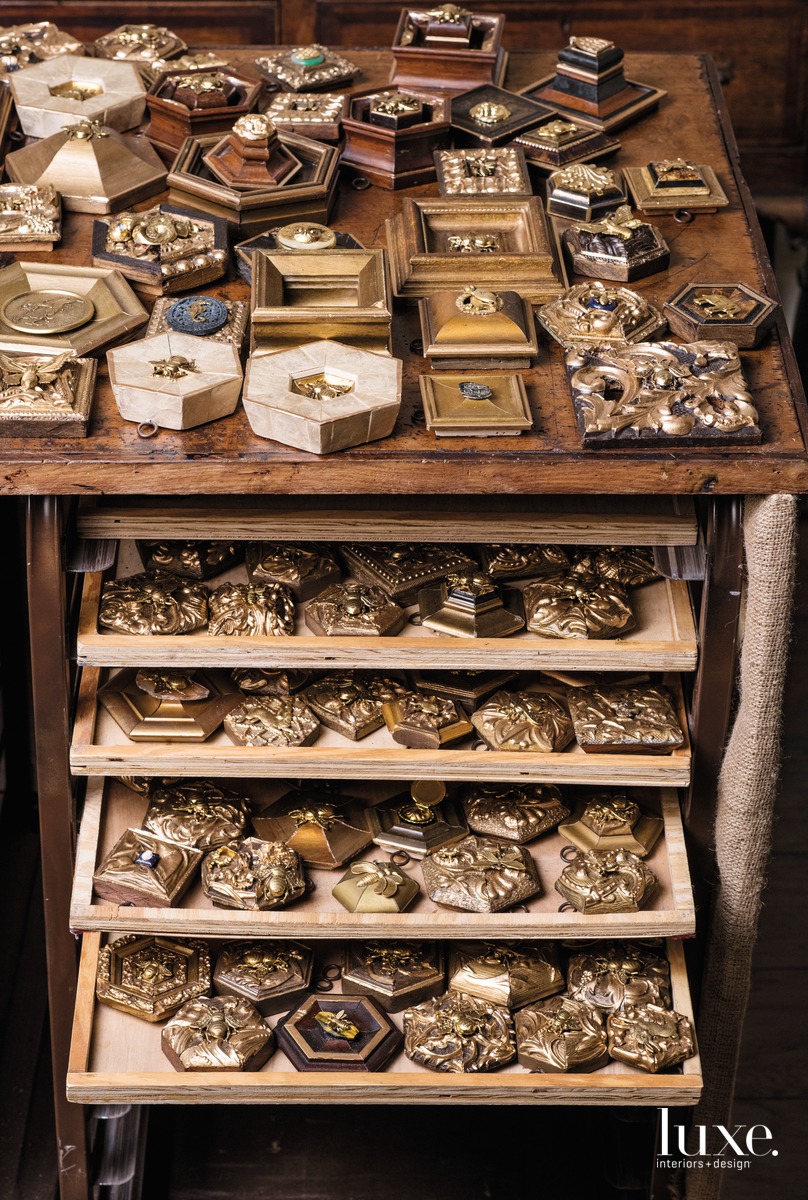 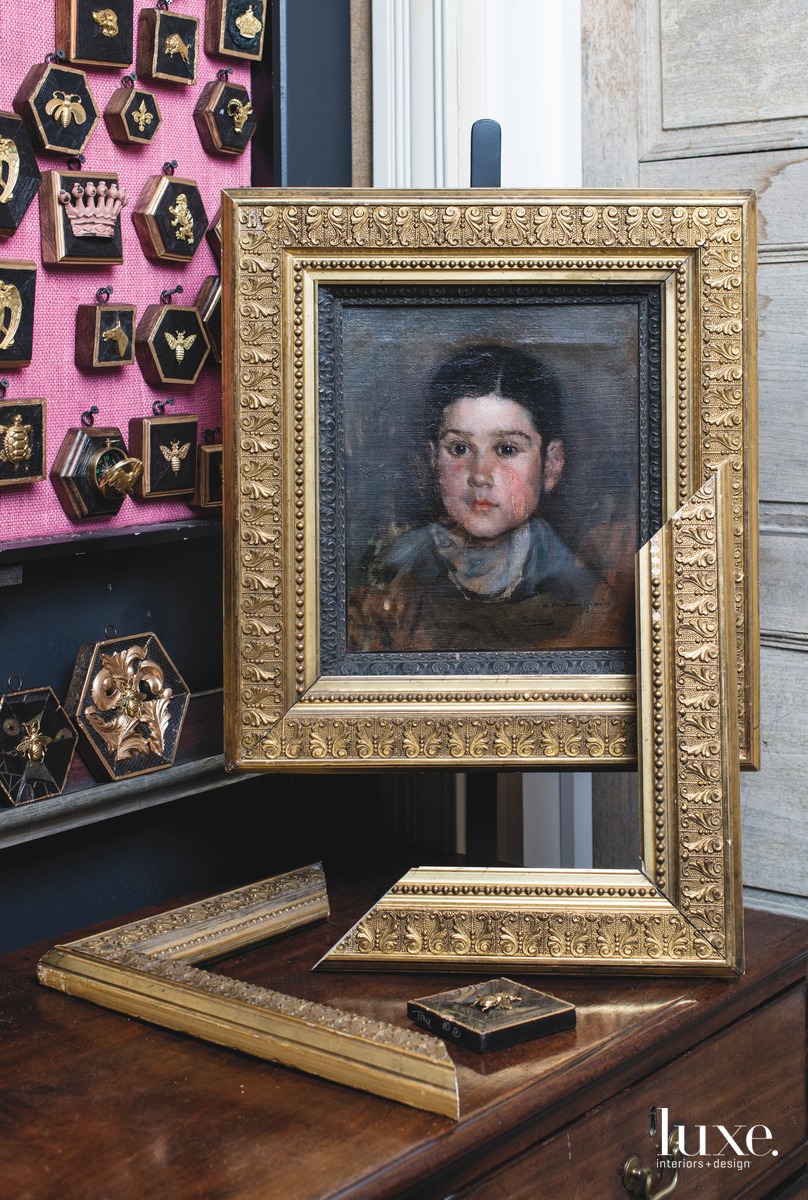 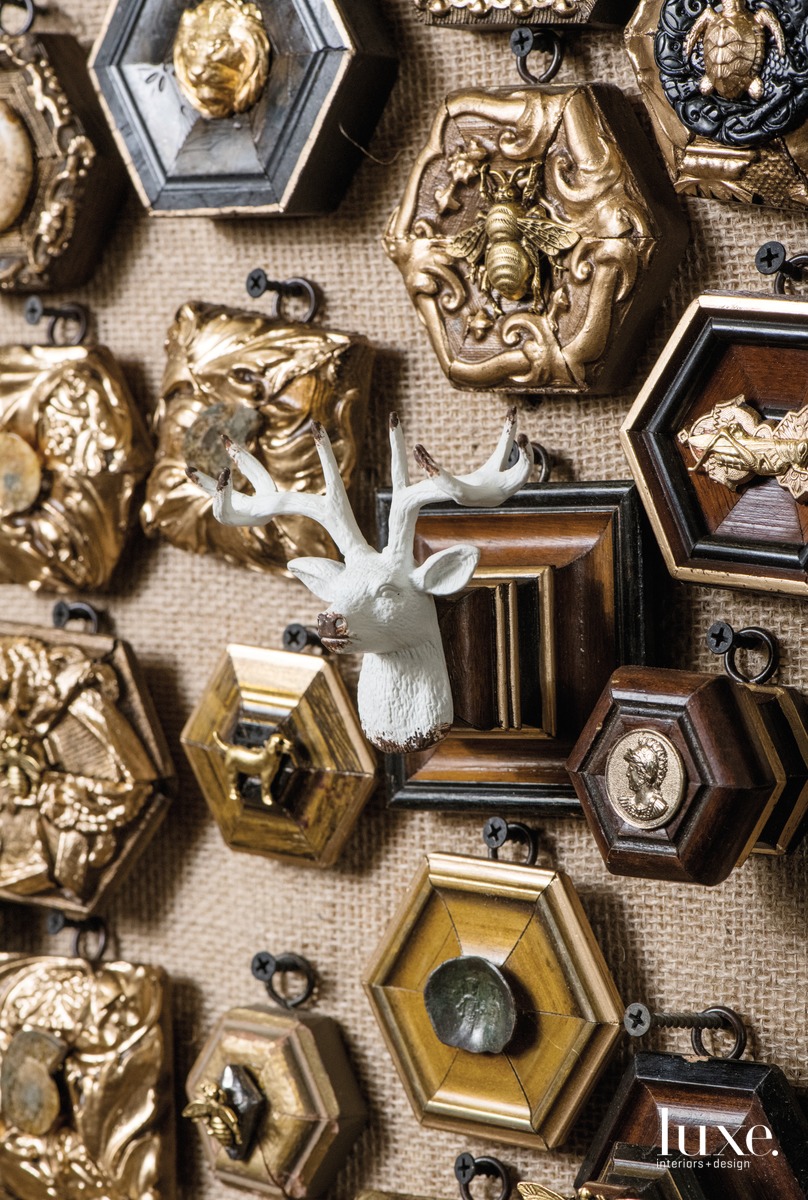 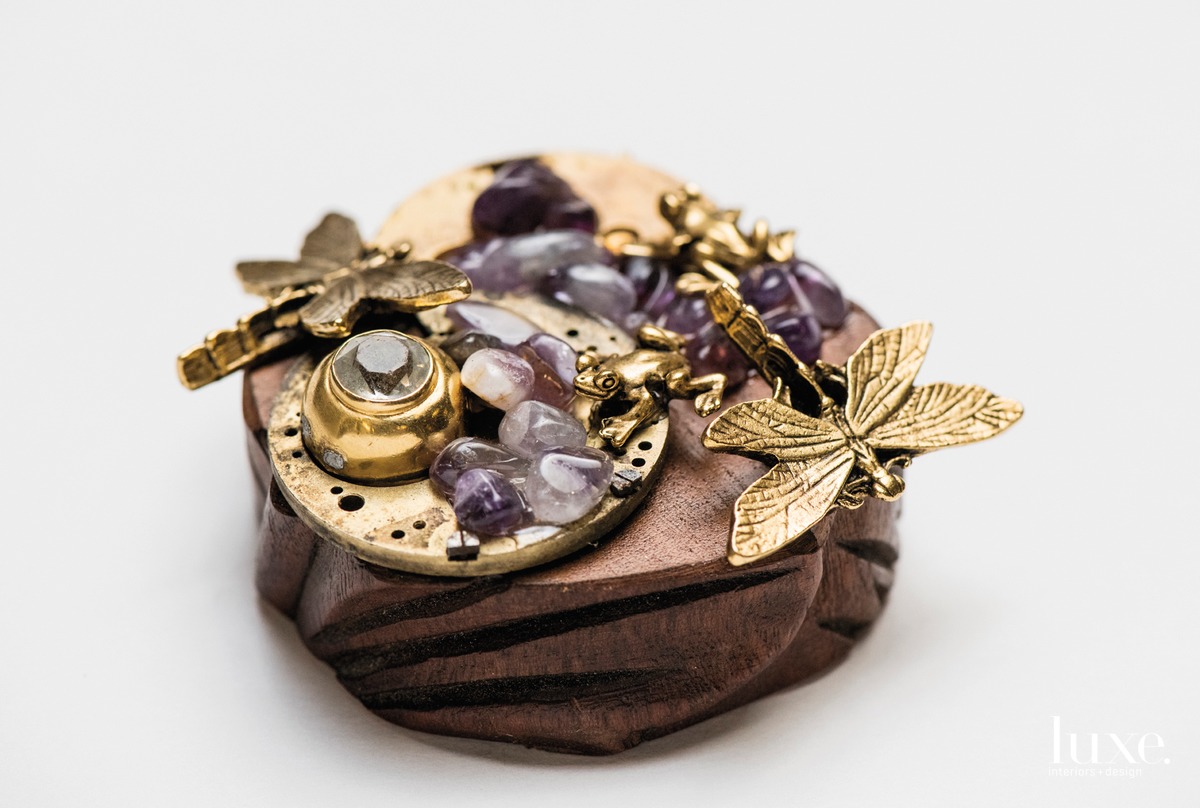 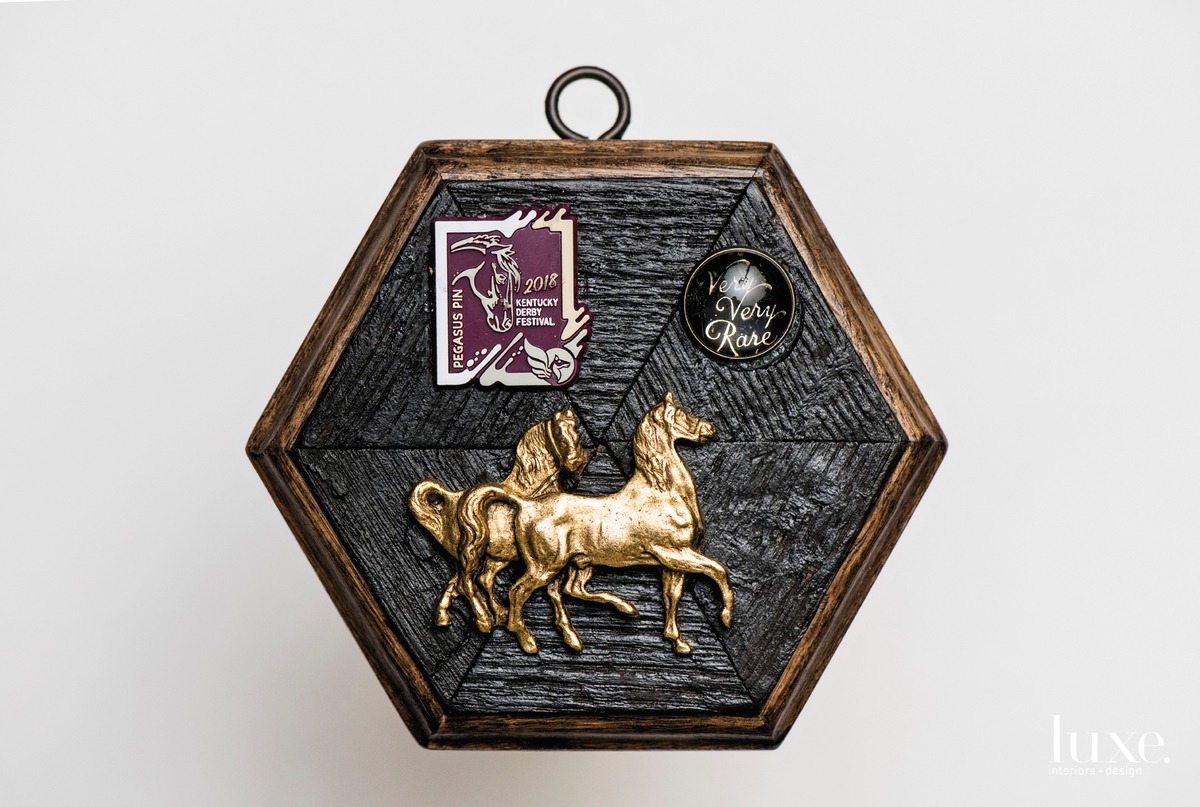 This is where patrons are likely to find shop owner Trace Mayer, assembling the handmade creations he calls Museum Bees: decorative objects made from frail antique frames that, instead of being discarded, are transformed into artworks themselves, bedecked with dazzling baubles. Some are four-sided, others six; most are roughly 3-inches wide, and all have their own characteristics and hidden meanings thanks to Mayer’s intricate historical knowledge and passion for finding miniature gems–like the gilded brass Napoleonic bee figurine he used to decorate the first piece he created, in 2002, and inspired the name Museum Bees.

“I love the act of the eternal treasure hunt,” he says. “I’ve used everything I can play with.”

The process of creating a Museum Bee starts with one of the many beautiful frames Mayer acquires yet is unable to use, often because it is in poor condition or doesn’t complement the artwork. “My role as a painting dealer is to let that painting tell the story and let the frame support that but not overwhelm it,” he explains. “Yet these frames are still phenomenal.” The frame is disassembled and cut into even pieces that are glued together into one interlocking geometric shape. It’s then affixed with a hook and restored, often stabilized with a wax or transparent binder.

From there, Mayer uses knives, chisels, E6000 adhesive and more tools of the trade to embellish it with whatever calls to him: cameos, antique coins, fossils, jewelry. “They all resonate differently,” he says of his varied collection. “I love uncovering mysteries.” Some designs come naturally, like a sea turtle emblem on a frame that mimics water. Others he’ll leave untouched for a couple months, in search of that perfect finishing flourish. The bee remains a prominent symbol, as Mayer works with a foundry in Rhode Island that creates castings of roughly six other bee figurines, including an Italian-style one.

In all cases, Mayer considers each frame a canvas for artistic motifs or cultural themes, such as a pearl with a Chinese dragon. “When I’m making these, I look at western and eastern styles of design,” he explains. “Eastern styles are asymmetric, and there’s an emphasis on an integration of nature or with the landscape itself. Western style of design is more like portraiture, where the subject is separated from the background. Both of them can be incredibly interesting. Each frame is like a little short story to me.”

The subtle symbolism is the unintentional way Mayer, who grew up in Louisville, taps into his background as an English major at Georgetown University. “I’m cursed,” he laughs. “You can’t un-fry that egg.” After then earning a master’s degree in fine and decorative arts from Sotheby’s, he was lured back to his hometown to manage the inventory at Bittners. In 1997, he opened Trace Mayer Antiques.

Now, Mayer spends a few hours at his workspace each day creating 40-50 Museum Bees, which are sold in his shop, on his website and at more than 100 retailers around the country. Lately, he has been working on pieces with “secrets” in them–such as a bee figurine affixed with a magnet that reveals a 12th-century Crusader coin–and he also makes custom designs for clients, incorporating items like Champagne corks from weddings. But no matter the final design, Mayer includes a nod to Louisville by marking the back of each Museum Bee with the initials of that year’s Kentucky Derby winner, a personal finishing touch by a passionate maker. “The dynamic process of creating is one that fills my battery,” he says. “I come away a lot more energized.”