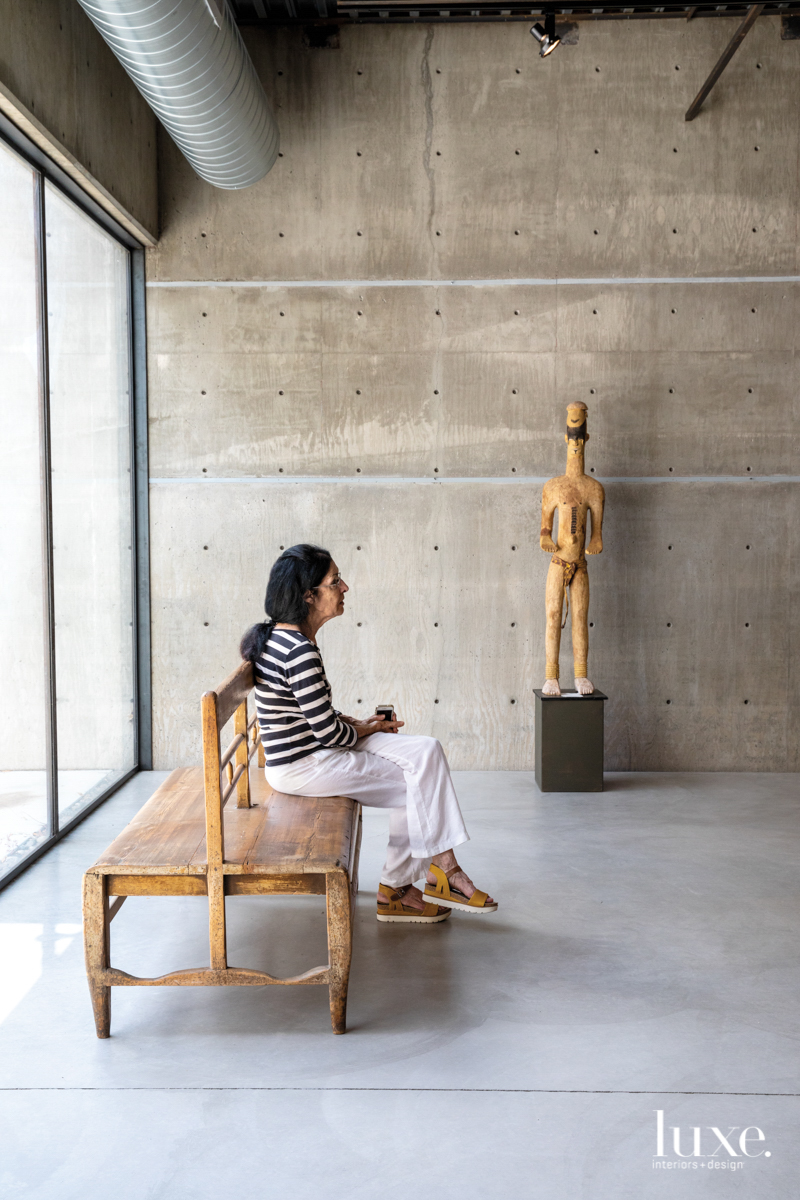 Artist Agnese Udinotti sits in the Udinotti Museum of Figurative Art next to an African ceremonial figure.

Striking a razor-sharp outline across the desert sky, the Udinotti Museum of Figurative Art in Paradise Valley, Arizona, makes an unapologetically contemporary statement in glass and concrete. Inside awaits an ode to the faces and bodies that have defined art across millennia, from a circa 1550 B.C. Egyptian bronze deity to 19th-century Japanese woodblock prints. 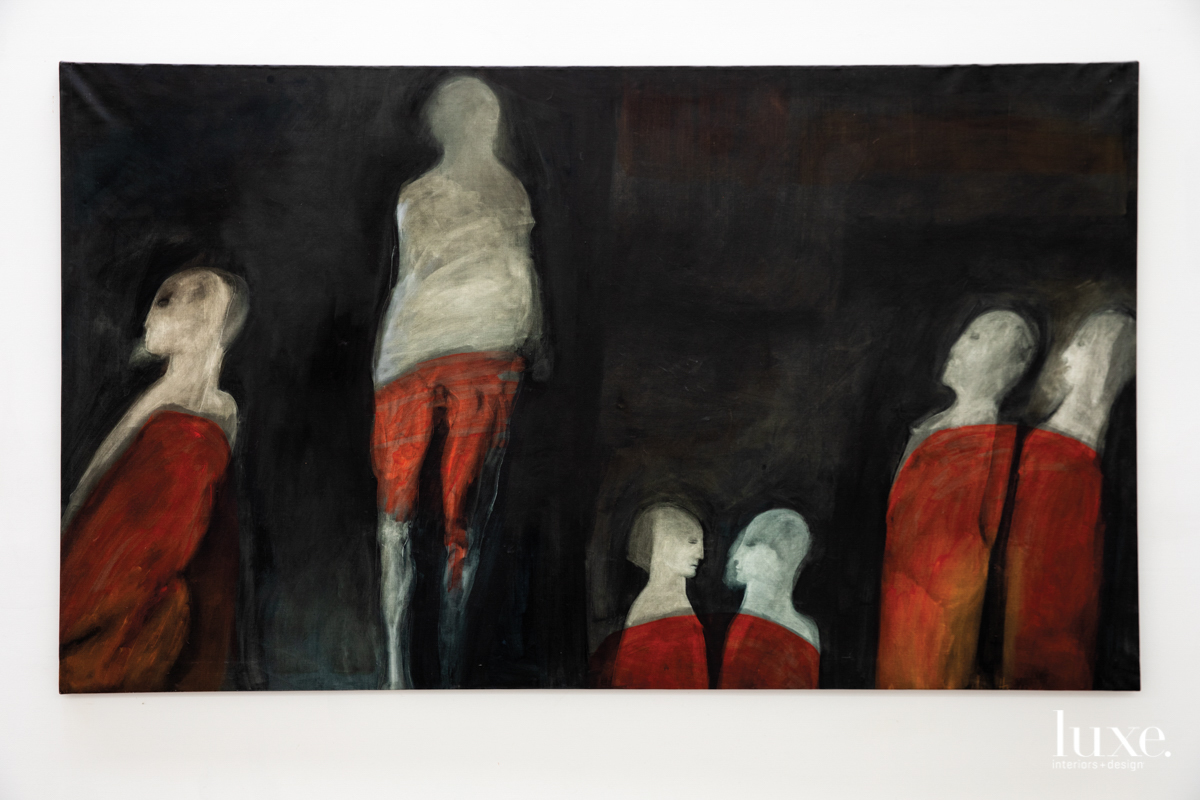 A Paradise Valley artist celebrates the enduring mystique of the human form.

A Paradise Valley artist celebrates the enduring mystique of the human form. 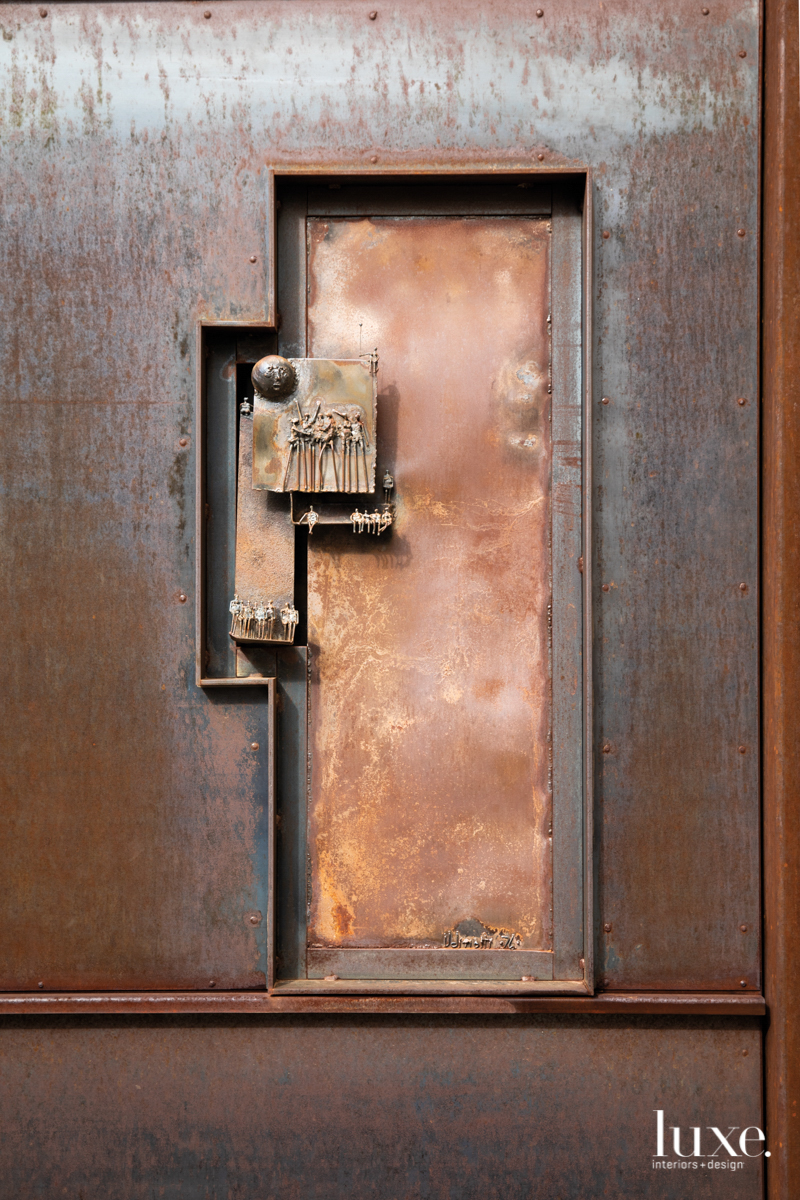 Architectural touches include a welded steel relief on the museum door.

Architectural touches include a welded steel relief on the museum door. 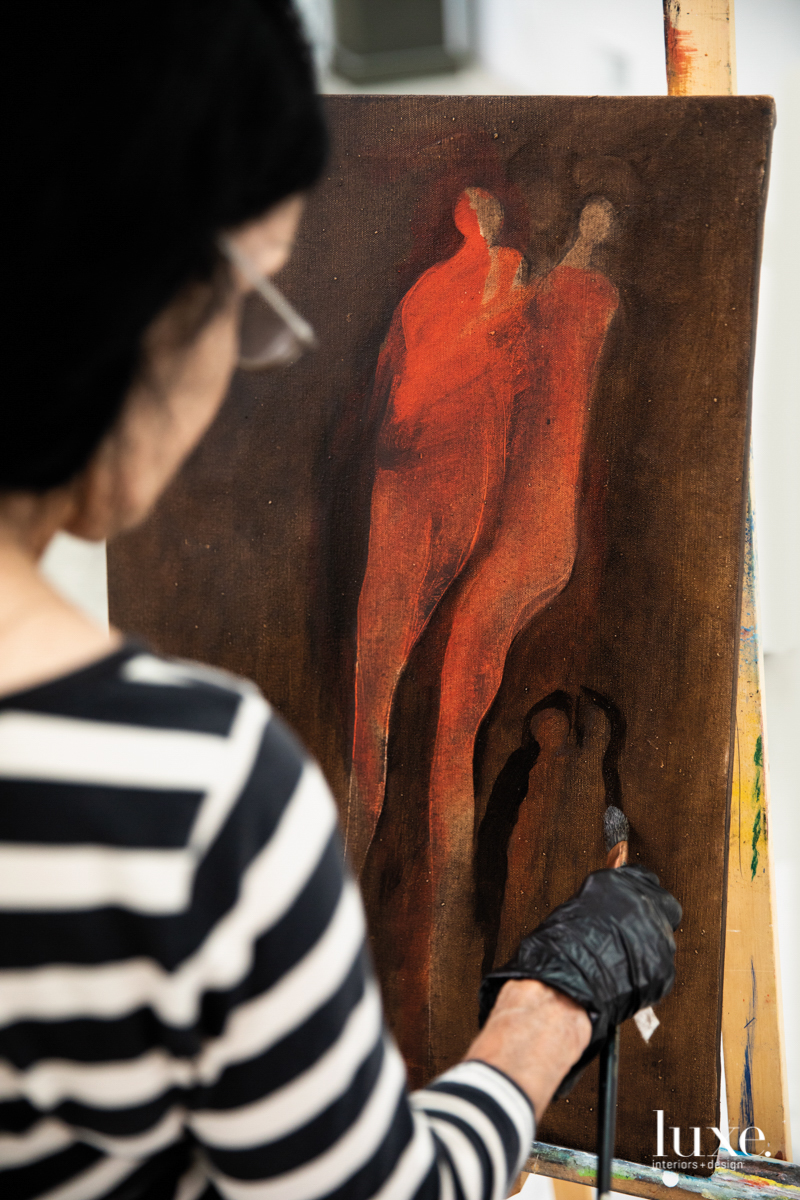 The artist works on Reality and Myth, No. 10.

The artist works on Reality and Myth, No. 10. 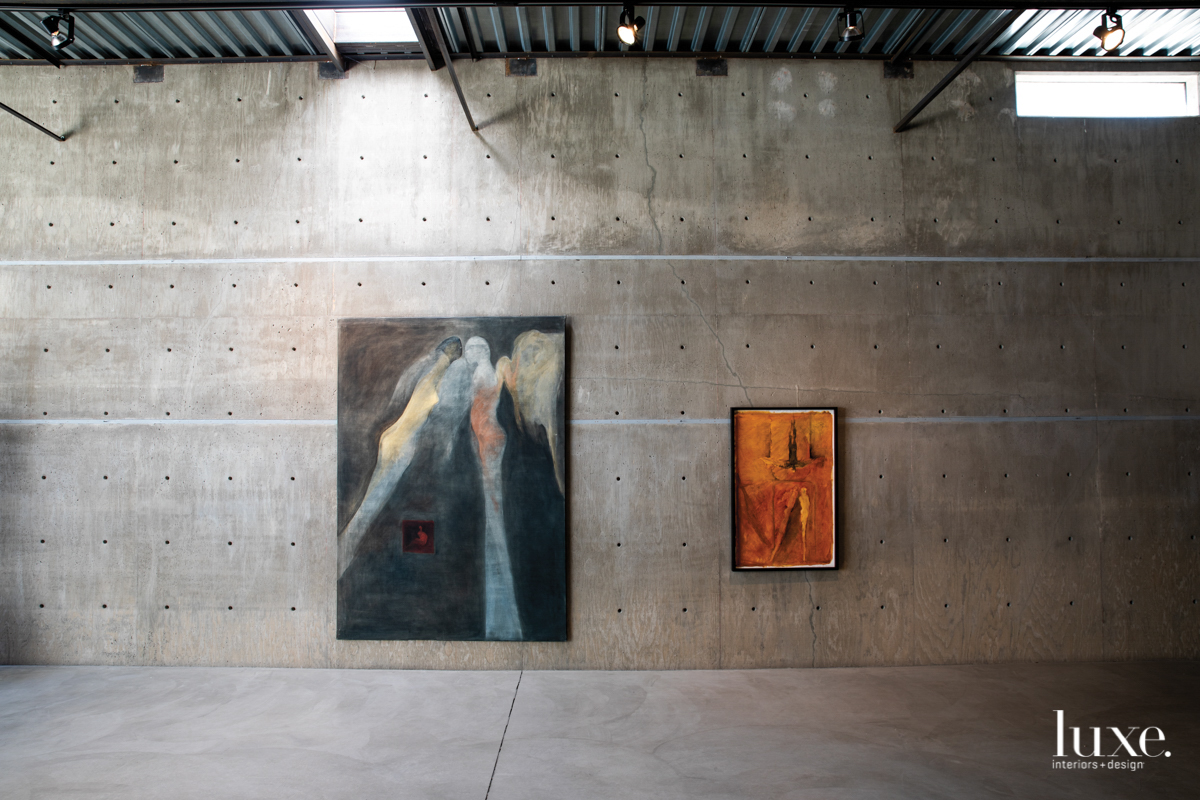 The museum showcases work that includes Confrontation, 1 by Udinotti.

The museum showcases work that includes Confrontation, 1 by Udinotti. 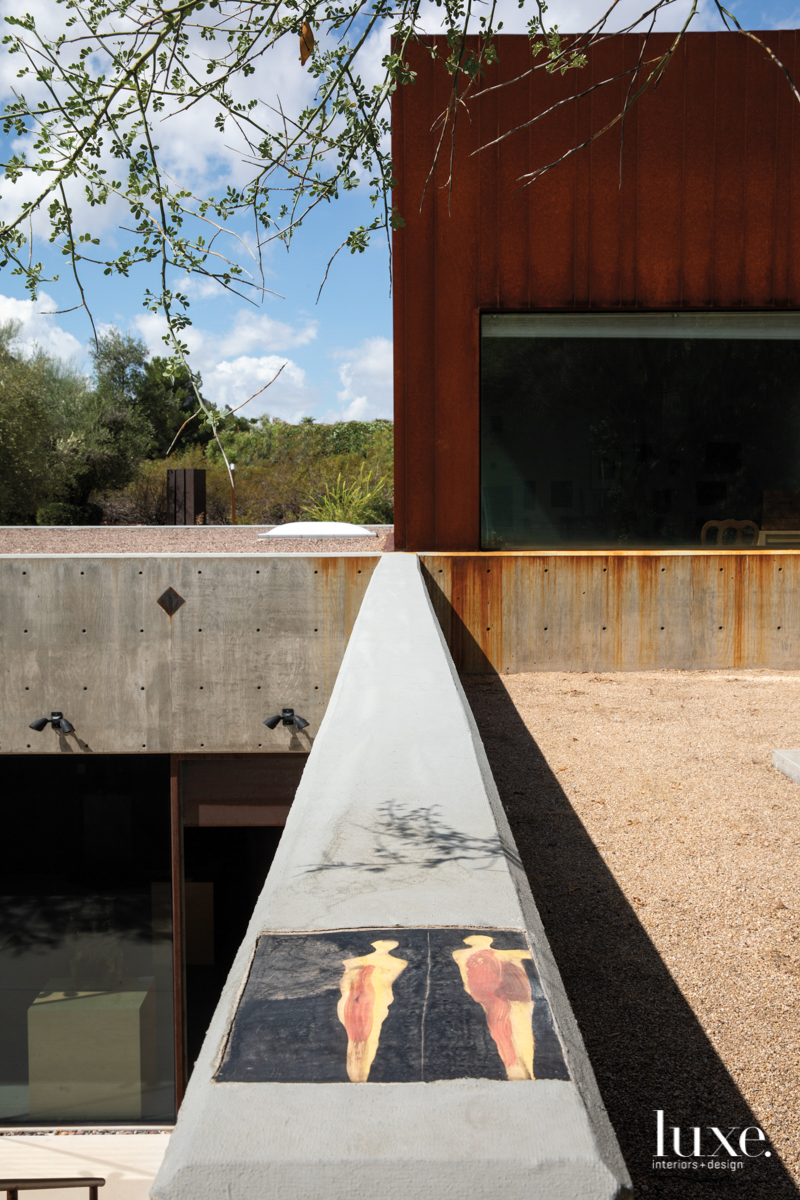 This is Collaboration by Udinotti and Jed Thomas, a plaque by Udinotti.

This is Collaboration by Udinotti and Jed Thomas, a plaque by Udinotti. 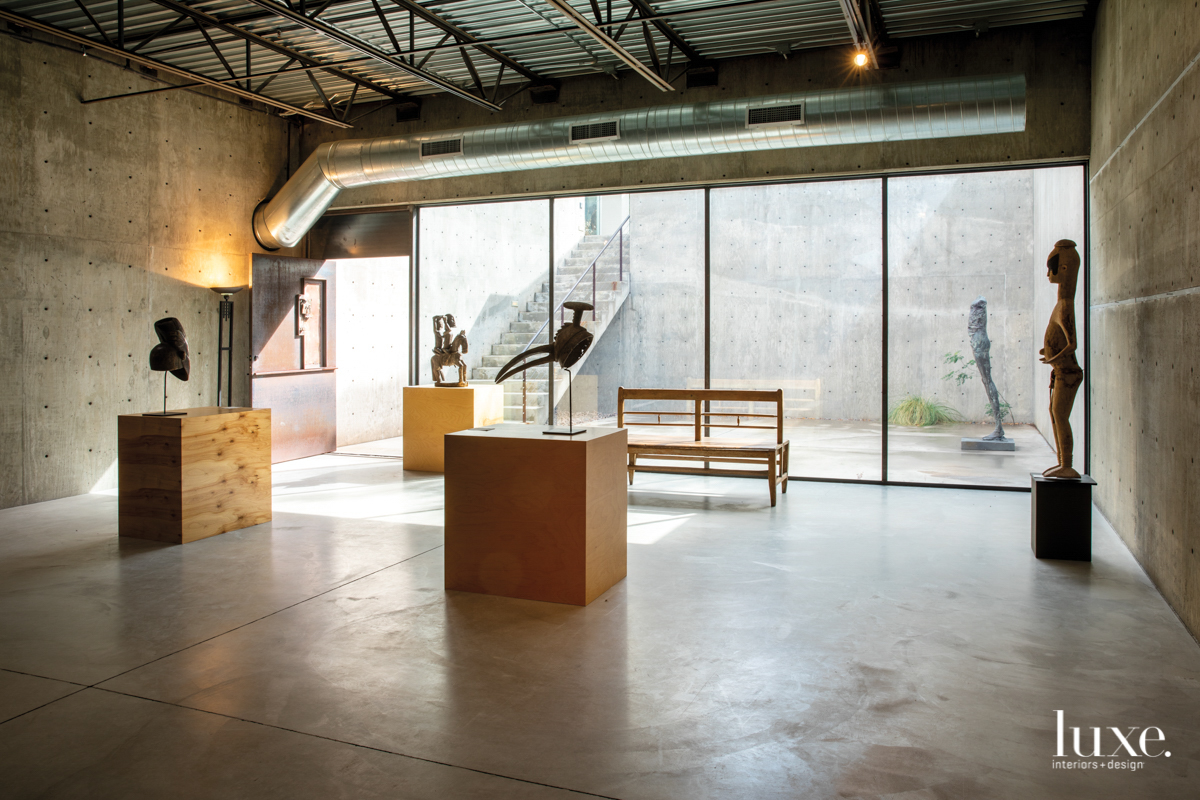 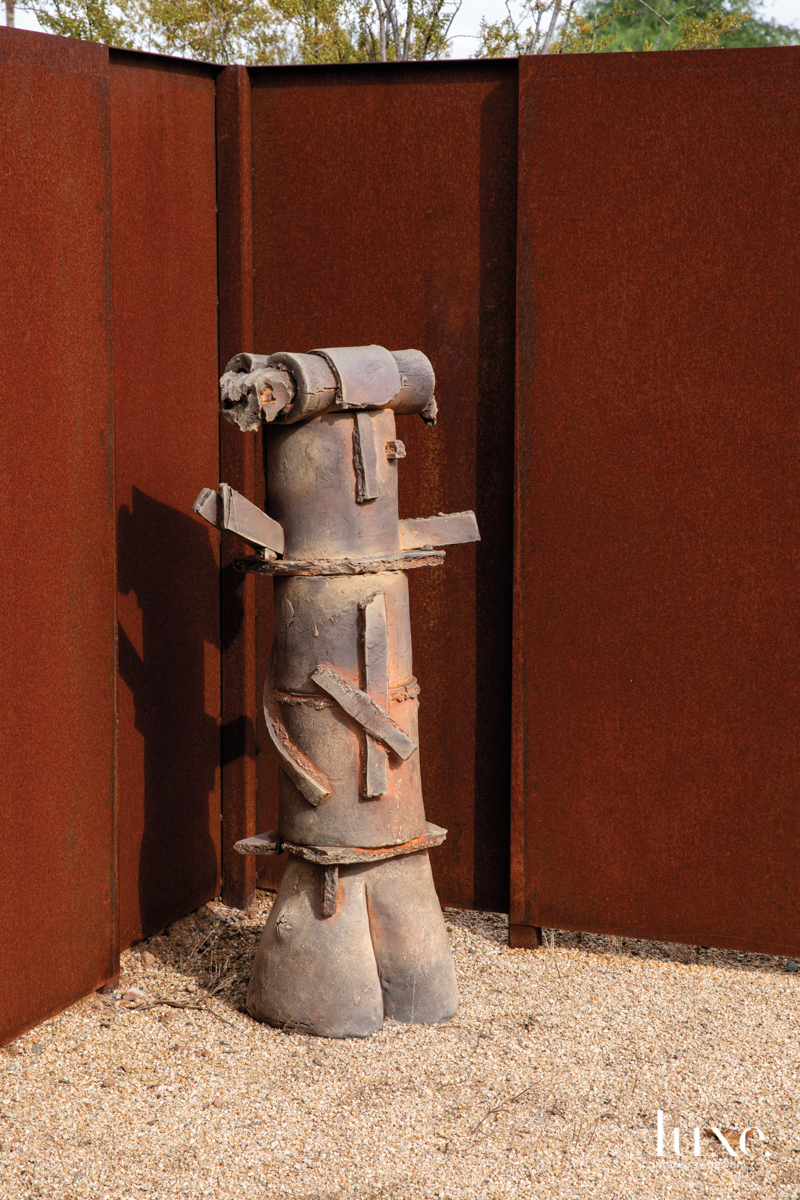 Kachin, by Don Reitz, is in the exterior courtyard of the museum

Kachin, by Don Reitz, is in the exterior courtyard of the museum 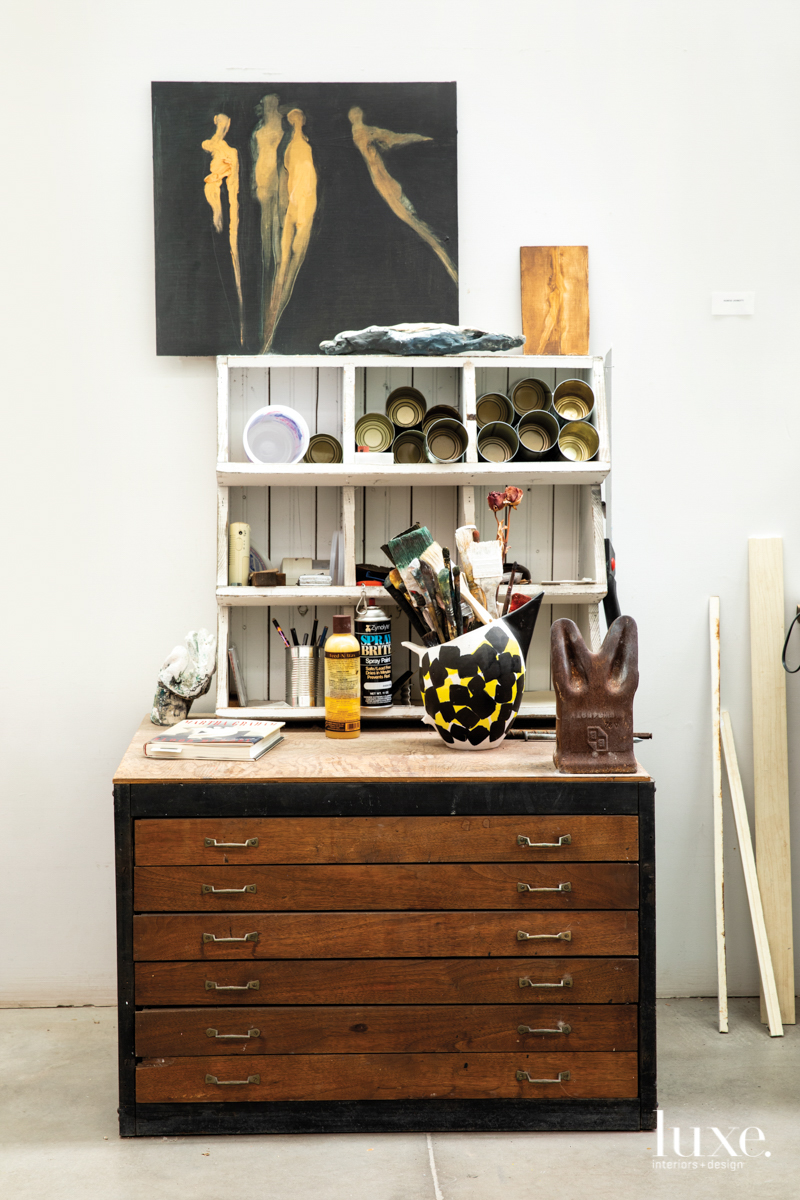 A glimpse into Udinotti's studio.

A glimpse into Udinotti's studio. 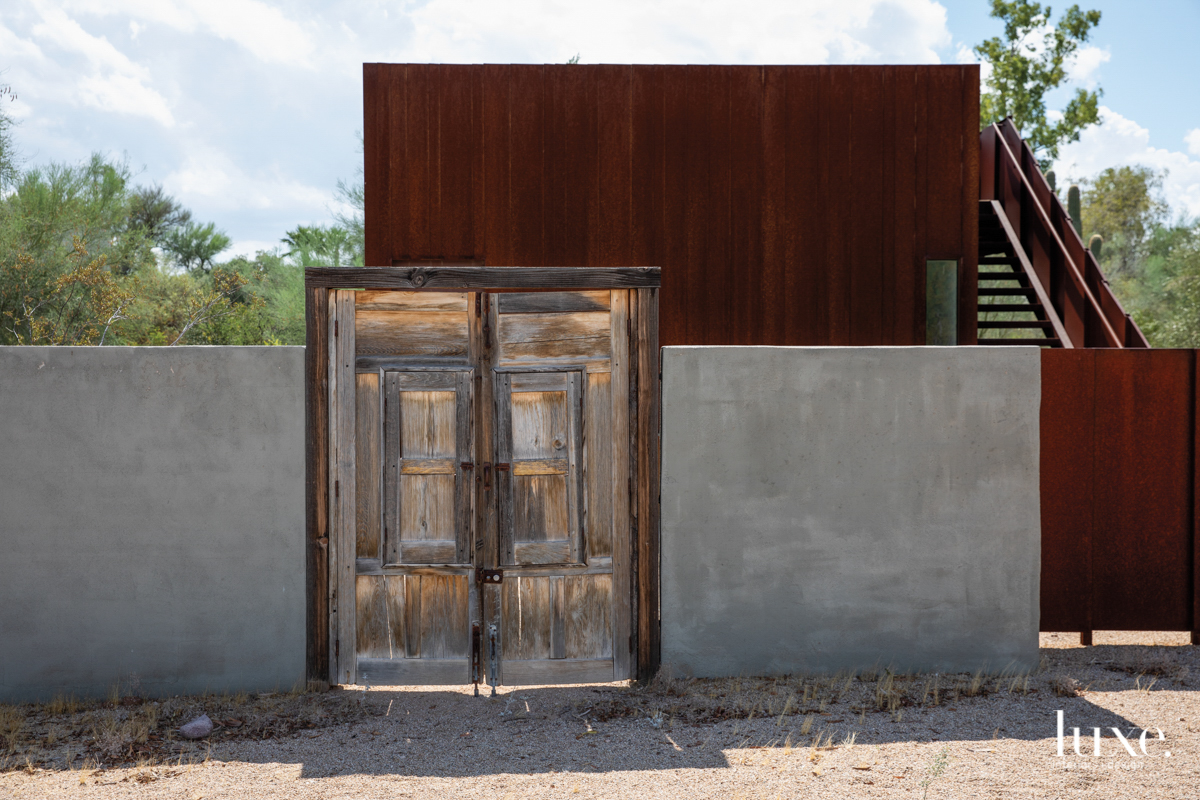 A glimpse at the exterior courtyard of the museum.

A glimpse at the exterior courtyard of the museum.

The space is the vision of founder and artist Agnese Udinotti, who has dedicated her creative life to exploring the enduring resonance of the human figure, from her curatorial work to her expansive career in painting and sculpture. “We are the human form. That’s who we are—with a heart, with pain and with sensitivities,” Udinotti explains. “To explore all the information that you have as a human being, the human form is the most complete subject to depict.”

Growing up in Greece, Udinotti was exposed early on to classical figurative works. This fascination sharpened when she moved to Berlin in the 1950s and encountered the city’s art community. Then a science student, she served as a sketch model for studio classes. “Up until then I appreciated art mainly through museum exhibitions,” Udinotti recalls. “Here, I saw the process.” Her path quickly diverged once she moved to the other side of the easel. “That feeling of putting paint on canvas was incredible.”

This led her to Arizona in 1958, where she studied fine arts and art history at Arizona State University. The state became her playground, where she explored facets of the human body across mediums such as painting, ceramics, sculpture and even jewelry. In 1964, she opened the Udinotti Gallery in Scottsdale as a showcase for contemporary figurative artists. “The public looked at abstraction as if that were the most modern aesthetic experience,” she says. “So I wanted to create a gallery that would accommodate figurative works as a way of expression.”

Her own approach to the art form has evolved over the decades. Currently focused on painting, Udinotti is less interested in carefully drafting the mechanics of the body. “I don’t apply paint on the canvas to form a figure,” she explains. “I can look at a white canvas and the images are already there. My responsibility is to bring it to the surface.” This slow revelation develops through layers of oils, “which give that translucency and richness I want.” She adds and wipes away color until something emerges. “Sometimes I just cover everything, and then start digging to find where the image is,” she says. In recent years, Udinotti has favored strong reds and yellows, with streaks of gold, “but they have been dirtied,” says the artist. “They are almost like memories of color.” For her latest series, “Reality and Myth,” the artists delves deep into monochromatics, with raw amber as the foundation.

No matter what the colors or interpretation, for Udinotti, the pursuit remains the same. Like the historic works that have survived generations, contemporary figurative art aims at universality. “It’s immaterial when it was painted or sculpted,” she says. “It should feel valid and valuable, for any period of time. 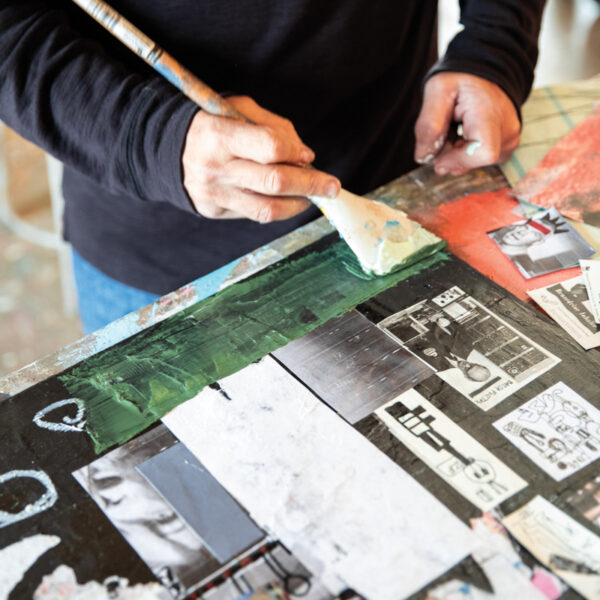 After Decades In The Biz, A Former Film Director Finds A Calling For Abstract Art 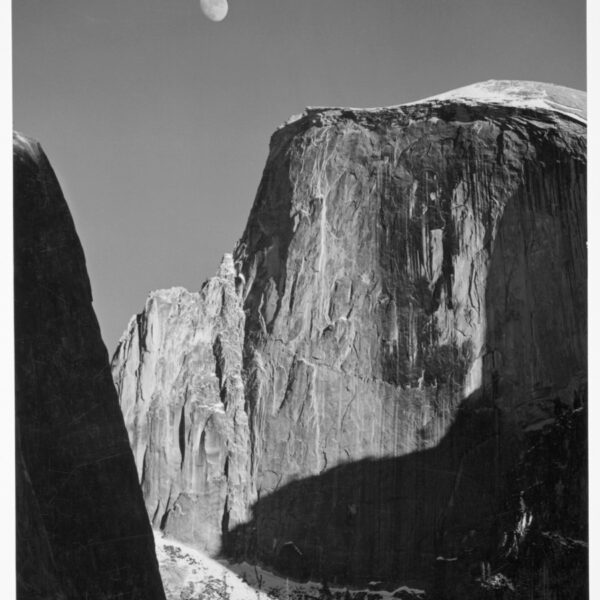 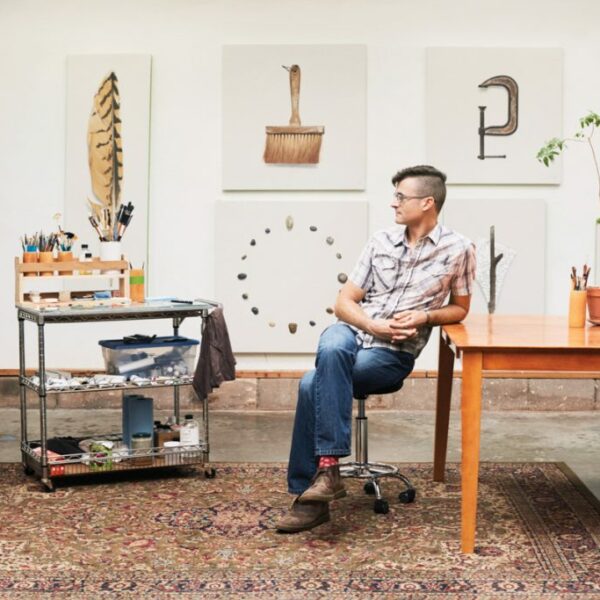 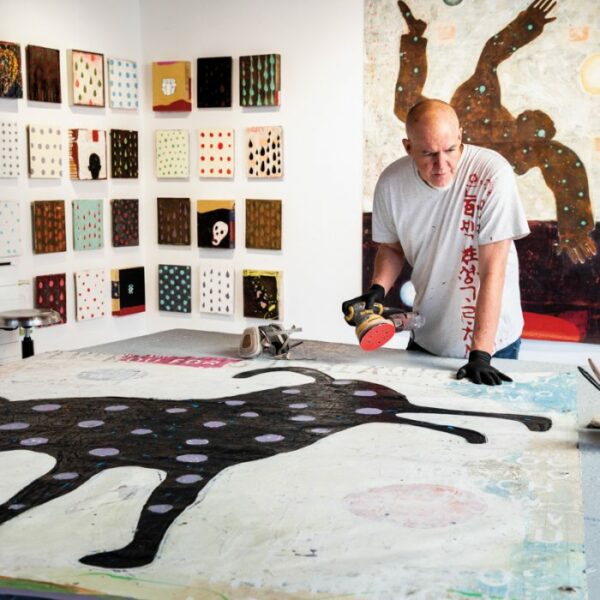 An AZ Artist Builds A Personal Mythology In His Work 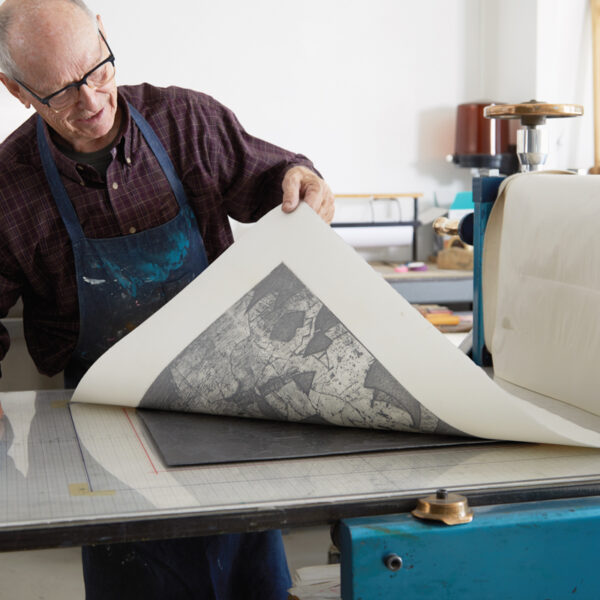