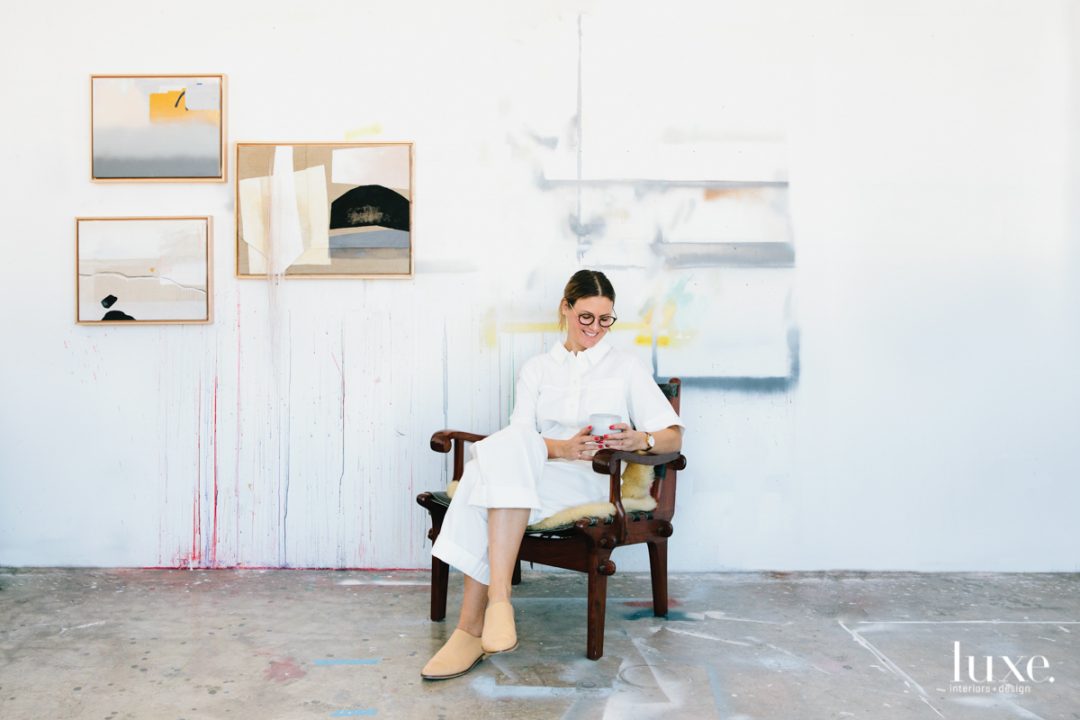 Artist Nike Schroeder works out of a studio in downtown Los Angeles.

My hope is that my pieces make the viewer pause, take a deep breath and be still for a moment,” says artist Nike Schroeder. With a creative practice that comprises abstract mixed-media paintings, figurative embroidered work and vibrant fiber creations, there’s plenty to engage with–and to keep the German-born, Los Angeles-based artist engaged.

The paths Schroeder takes to produce her work differ depending on the media and method. Drawing on an education that encouraged her to translate her emotions on to her canvases without a cognitive filter, the artist’s paintings and sewn work delicately balance passion and precision. “You don’t really have that much control when you sew because you don’t hold a pen in your hand,” she notes. “You move the canvas under a needle, which stays still. I thought that was a really interesting challenge–of transporting the idea of the moving line but moving the canvas instead of the pen.” In contrast, her fiber pieces made of rayon thread–arranged in color gradients–evolve differently. “They’re very calculated. I lay out the colors and sizes–it’s a mathematical process,” she shares. 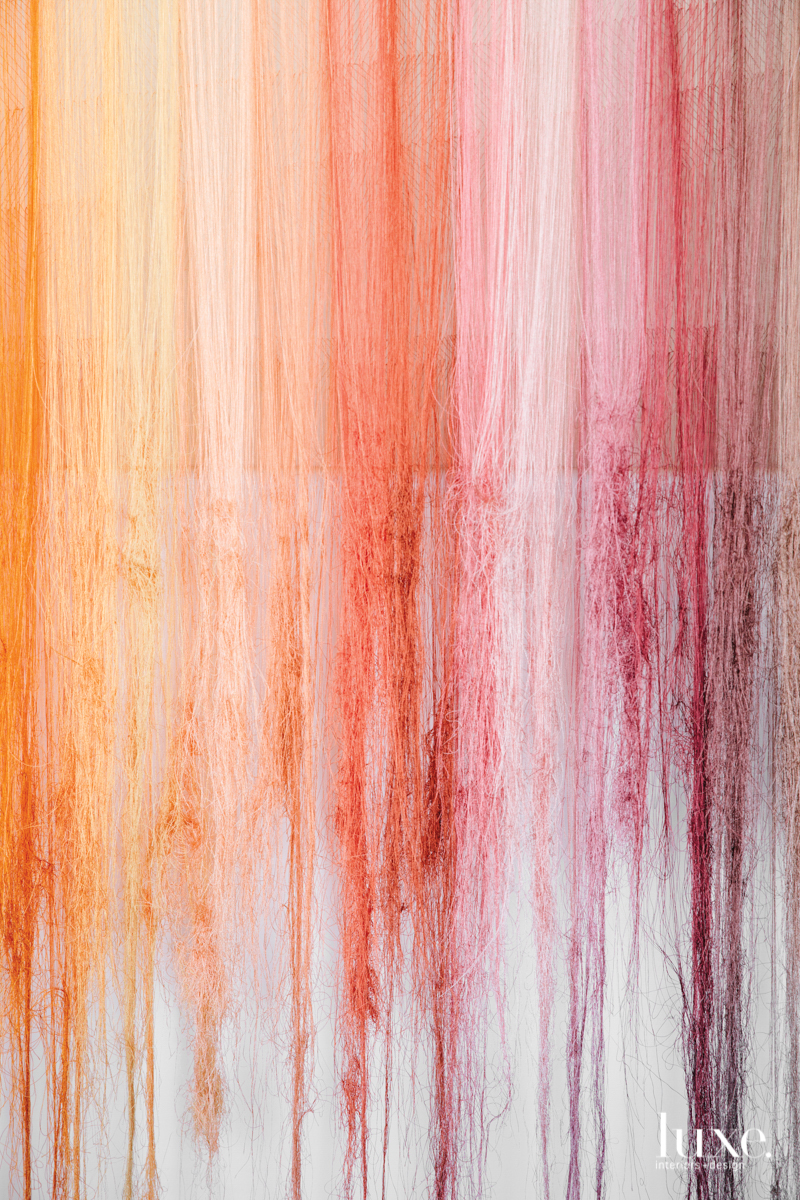 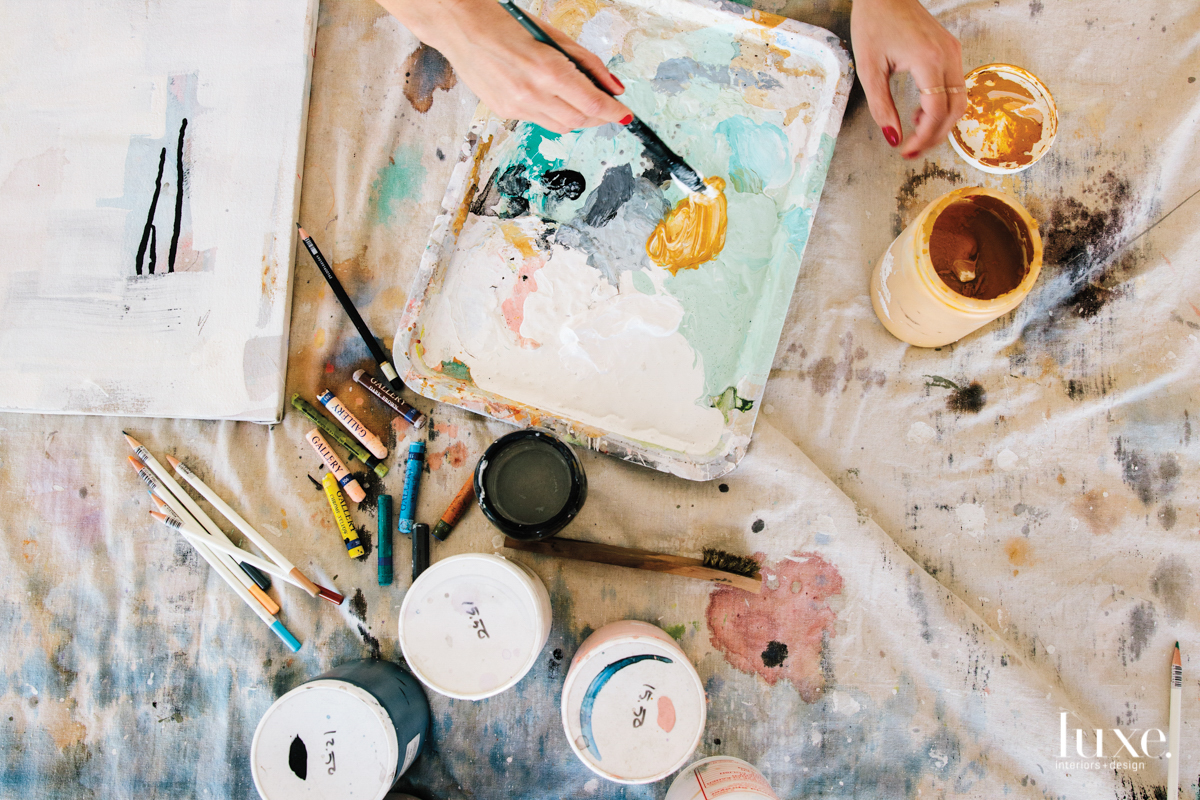 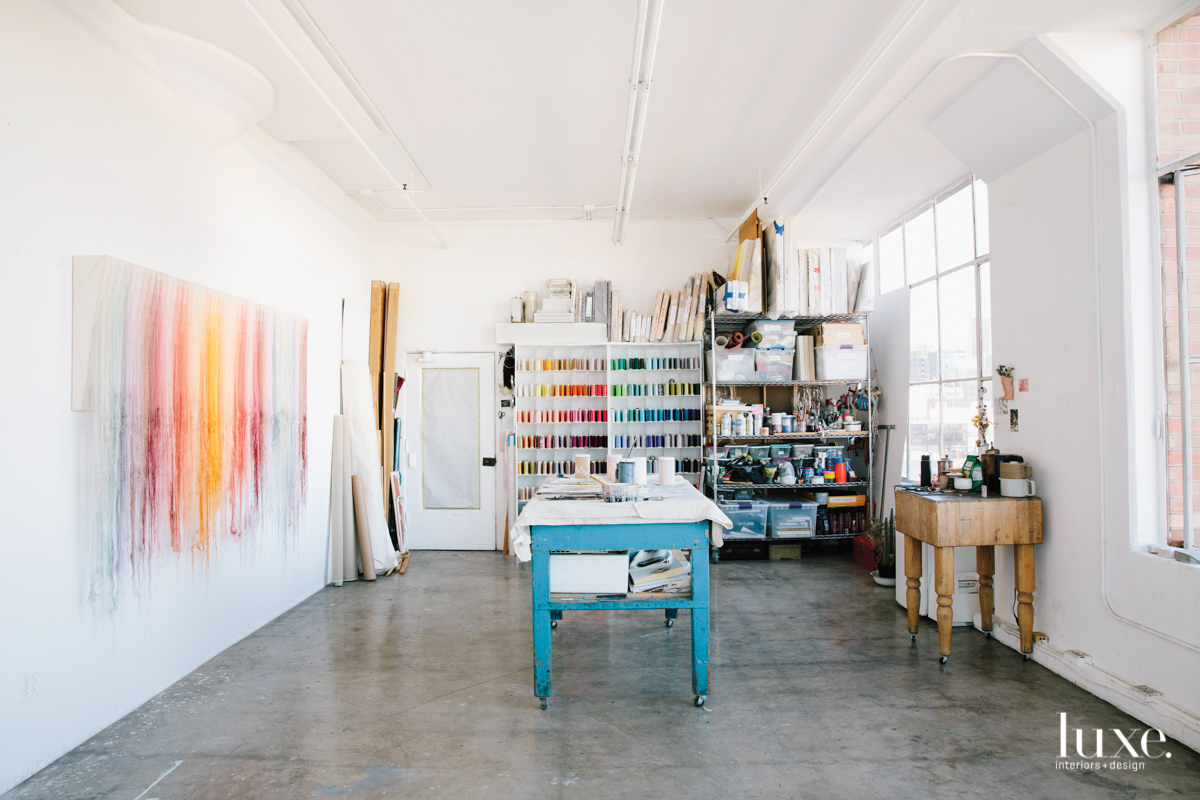 Her studio is in a historic building in Downtown L.A.

Her studio is in a historic building in Downtown L.A. 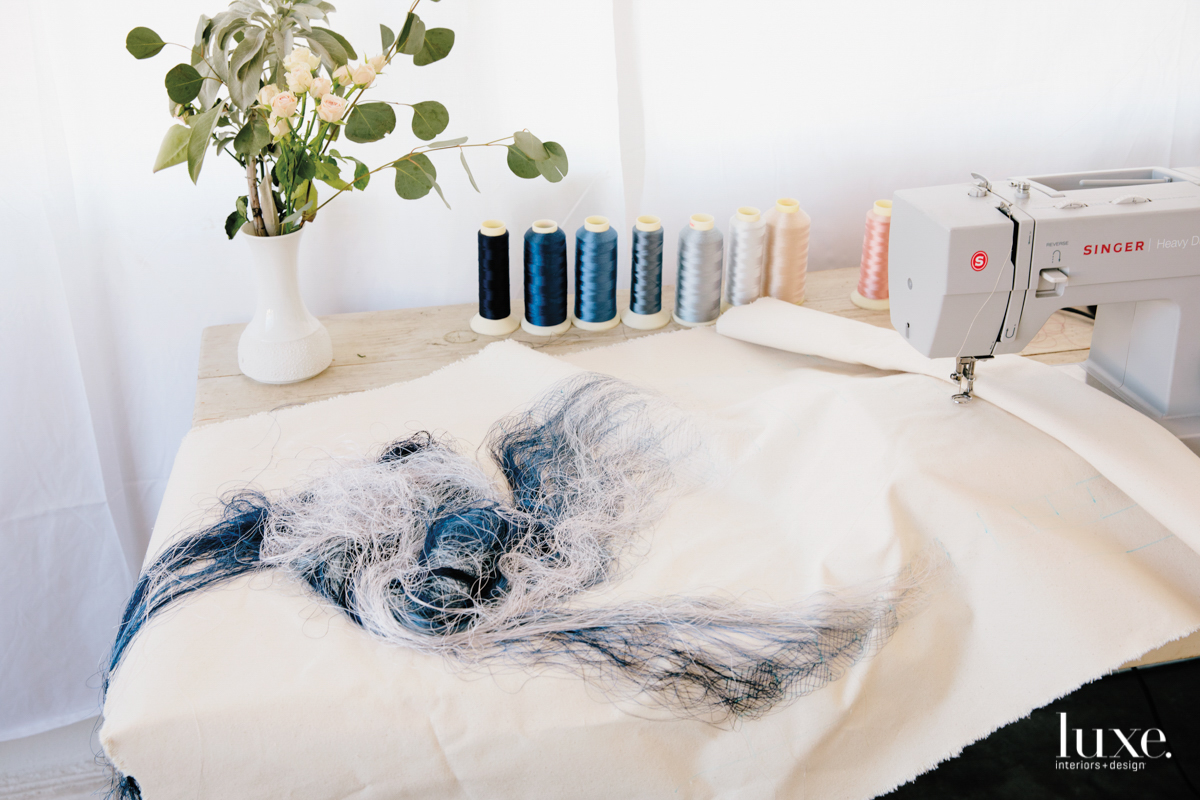 Schroeder also embroiders fabric as part of her practice.

Schroeder also embroiders fabric as part of her practice. 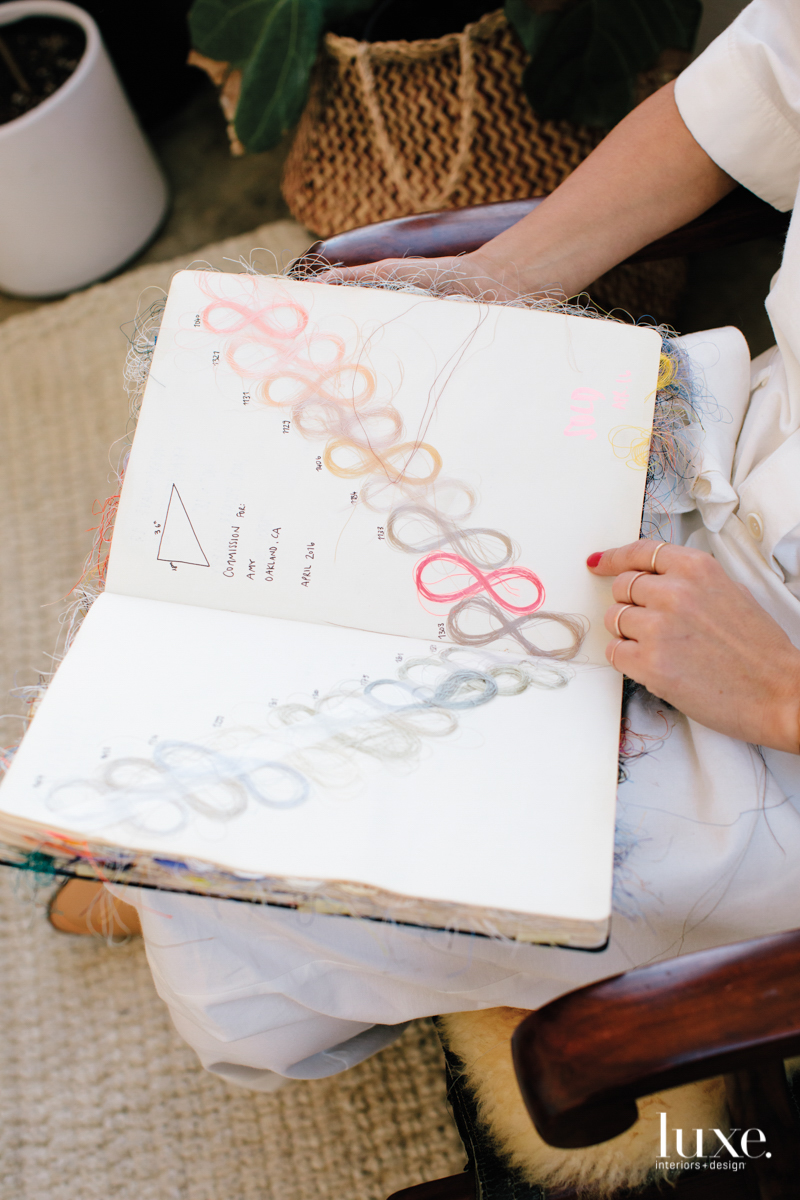 A notebook holds the thread progression for a fiber piece.

A notebook holds the thread progression for a fiber piece.

Schroeder’s sources of inspiration are varied. Her paintings are often driven by her exhibition schedule, so she’ll conceive a group of pieces around a particular theme. Take the layered, abstract pieces from “Backspace/Delete,” her 2017 show at Walter Maciel Gallery. “When I walked around downtown Los Angeles, I found the way that people paint over graffiti so fascinating,” she says of the show’s genesis. “It’s this layer of people trying to match the color but not really caring–a patchwork of layered colors. There was such a mundane beauty in it that I wanted to bring that into the studio.” At first, she attempted to replicate photos of those walls in her paintings. Eventually, in a move reminiscent of the surfaces that initially inspired her, Schroeder began painting over what she had already done and adding elements such as cast concrete to evoke the materiality of the city itself. “The whole body of work became increasingly minimal and clean the more time I spent with it, because I kept erasing what was there,” she says.

The play of light and nature figures heavily in her fiber work. Her first piece using the rayon thread gradient, 34°N 118°W, represents an abstraction of the moment the sun pierces the desert horizon at dawn. “I really love the fine hues of colors and bringing them together,” she says. “Sometimes I just take two completely opposite colors and then work out the path from one to the other. I like the challenge of making a smooth transition.”

And, with all of her work, as much as Schroeder wants to engage her viewers on an aesthetic level, she’s also hoping to get them to go even deeper. “I want people to rethink the traditional usage of material in the fine arts and to question the limitations of these traditional boundaries,” she says. “Where does a painting begin and end? Where does the painting happen if it actually falls off the canvas? The greatest impact to me is to provoke questions, but also to provide a space of peace and stillness.”