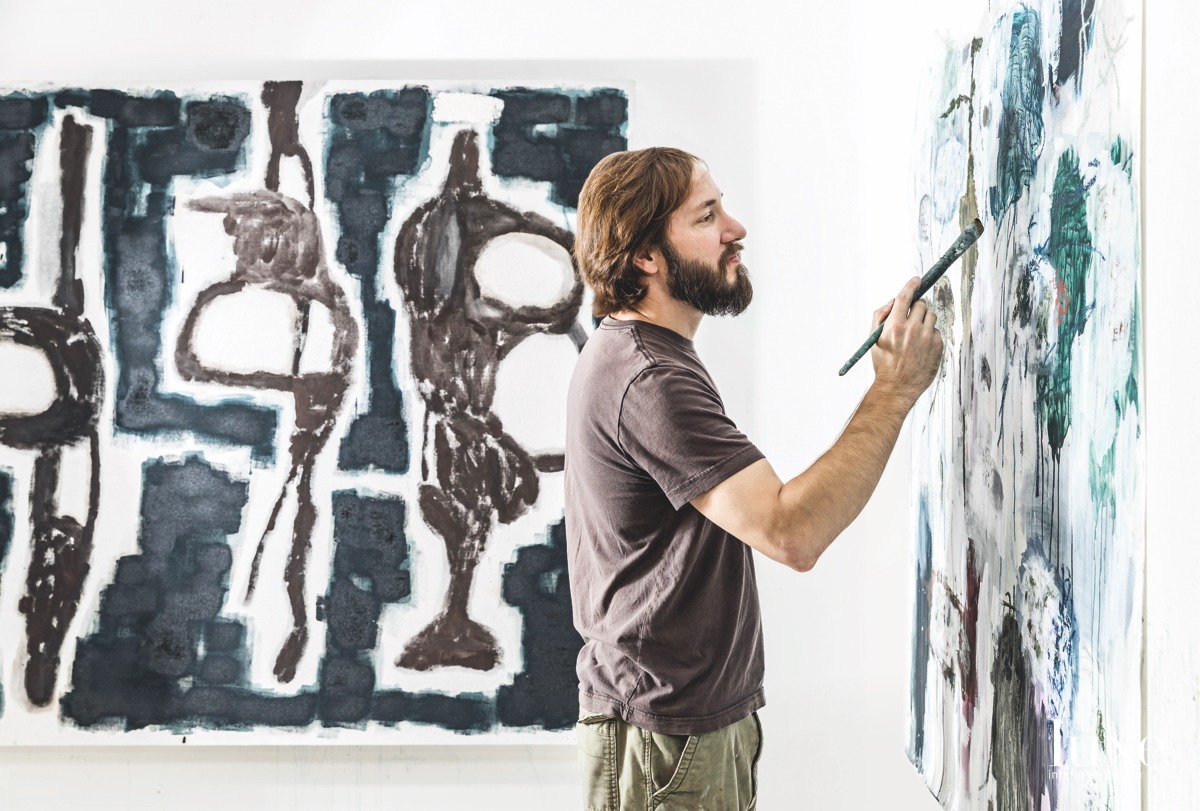 Most of my art happens in the moment,” says Fort Worth-based artist Stephen Battle, whose works include abstract oil paintings on canvas and mixed-media works on paper. “It is a result of exploration and learning how to express what I want it to say.”
Battle–who holds a Bachelor of Arts in archaeology and a Master of Fine Arts in painting–first began painting in college after a professor stirred in him an understanding of art’s importance and impact on history. Fueled by this realization and influenced by artists such as Jackson Pollock, Mark Rothko and Cy Twombly, Battle began feverishly working on raw canvases stapled to his apartment walls. “To find my passion for art, I had to learn how to see its non-decorative meaning,” he explains. “And I found it was a new language I could use to convey my thoughts about life and my place in the world. It was an intense feeling.” 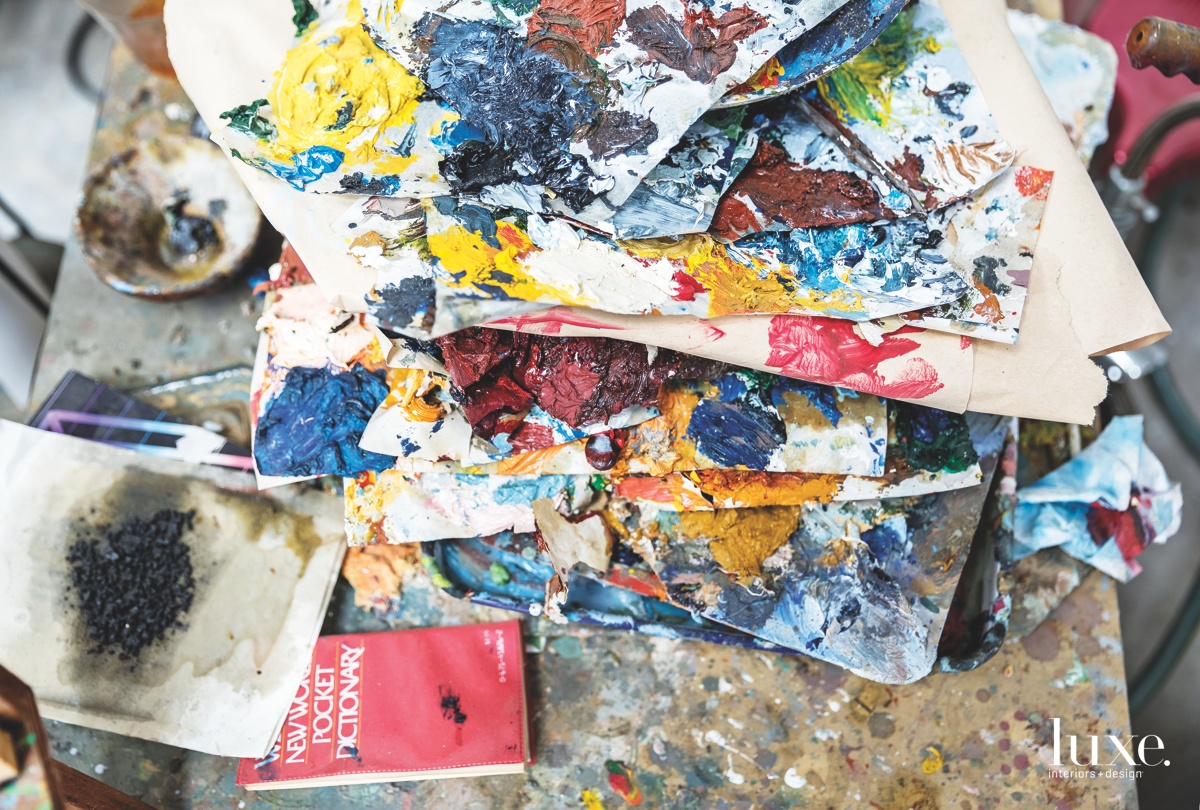 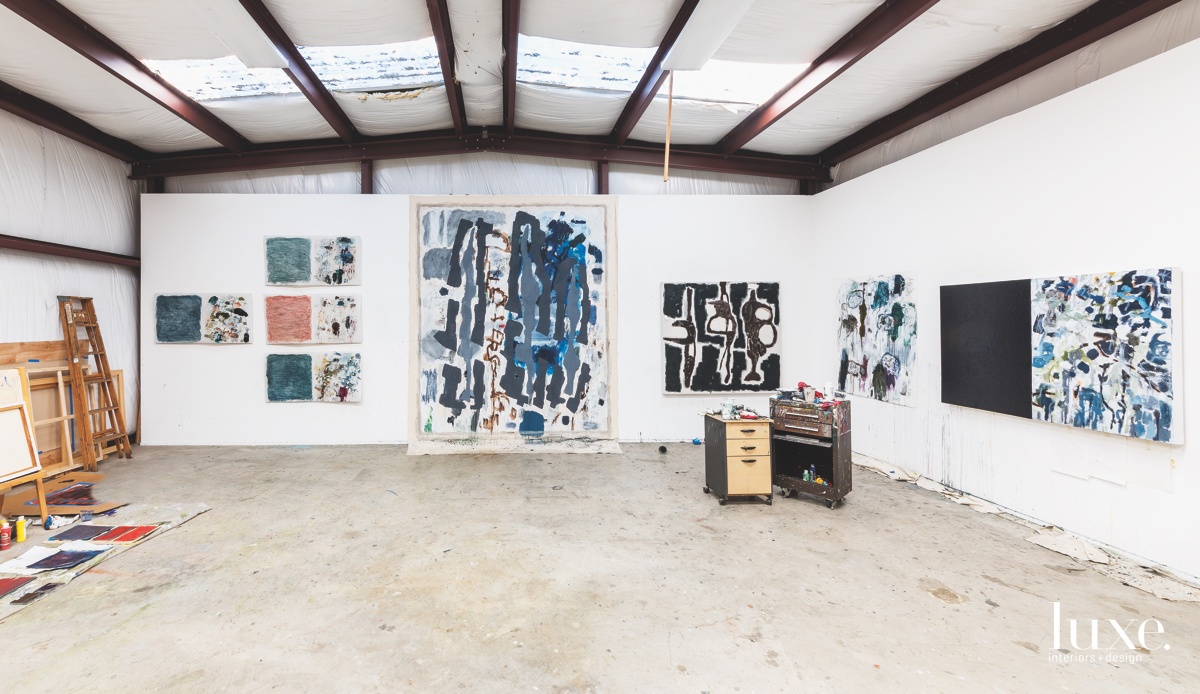 In his Fort Worth studio, Battle retains his used palettes.

In his Fort Worth studio, Battle retains his used palettes. 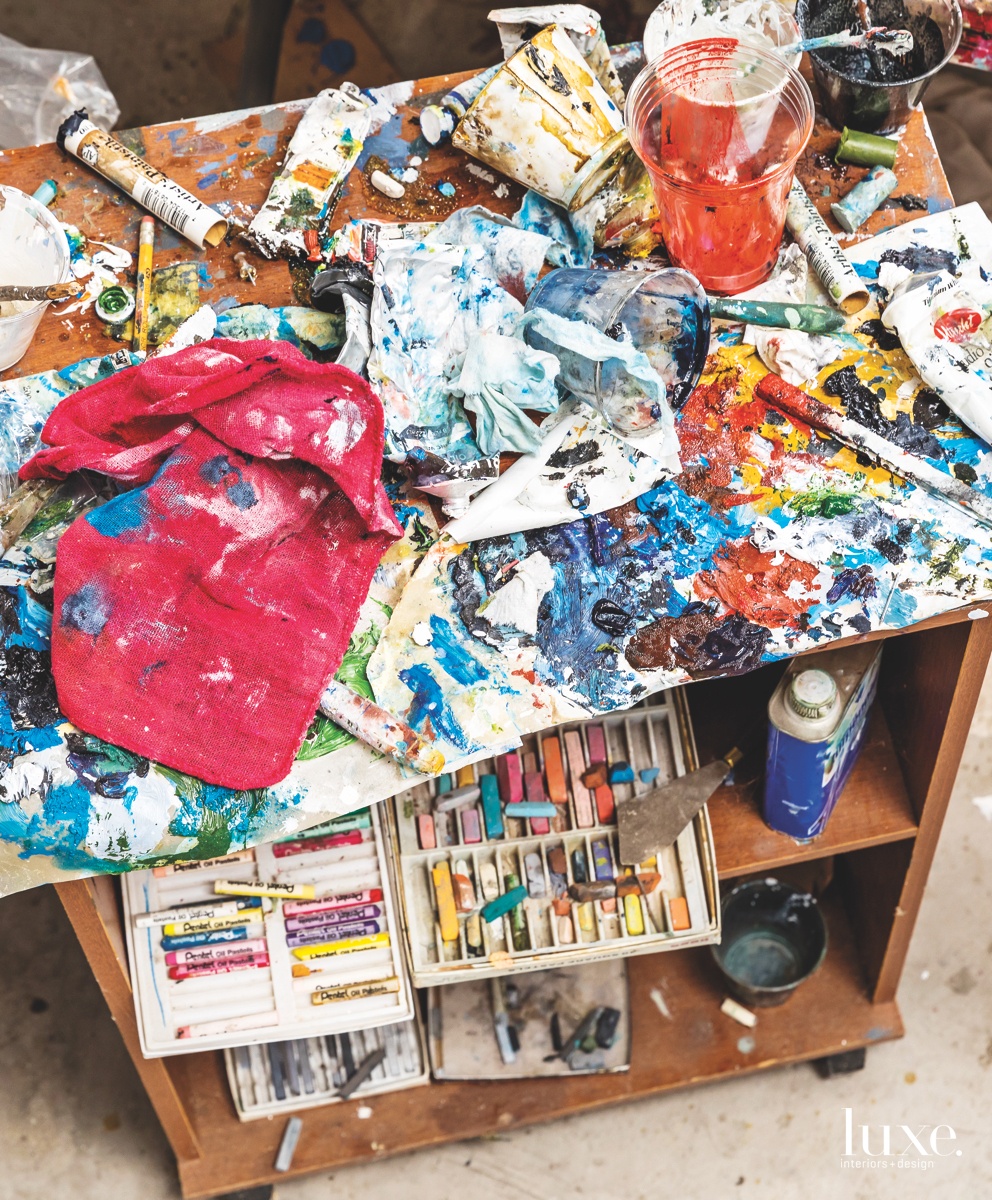 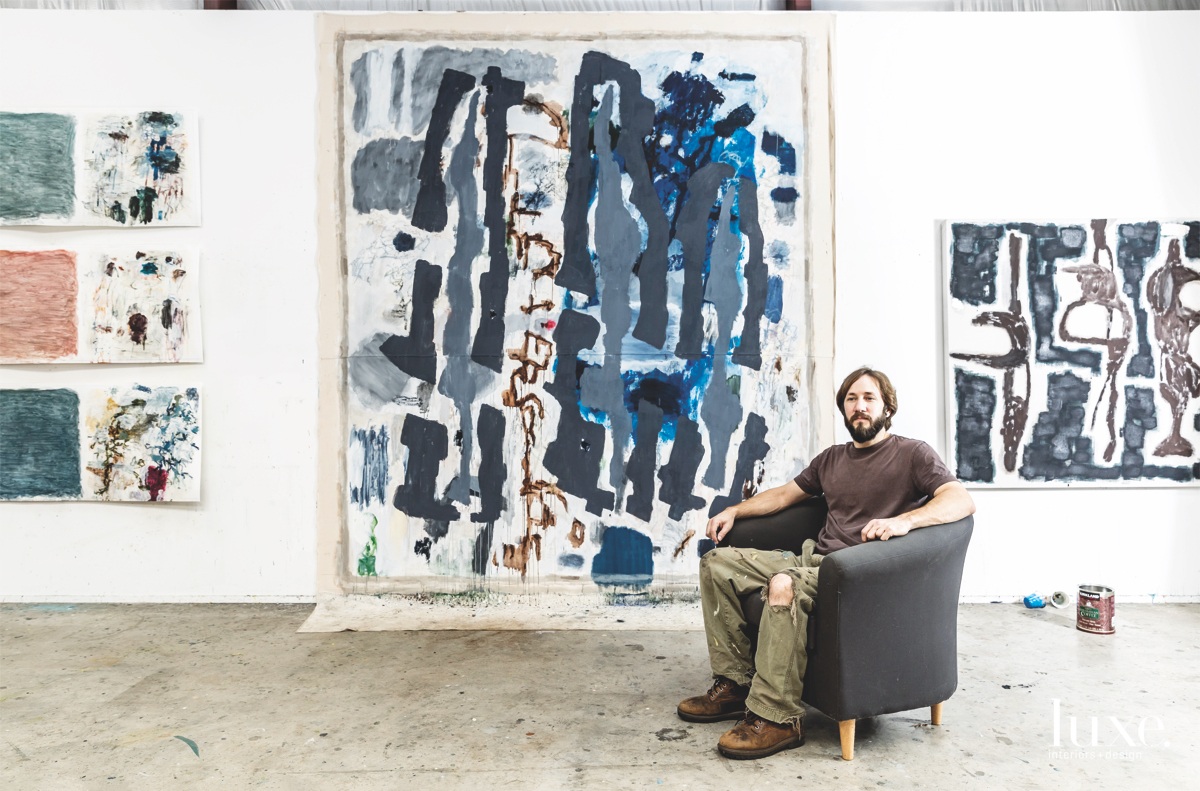 His works on canvas incorporate mediums such as oil, acrylic, pastel, charcoal and pencil.

His works on canvas incorporate mediums such as oil, acrylic, pastel, charcoal and pencil. 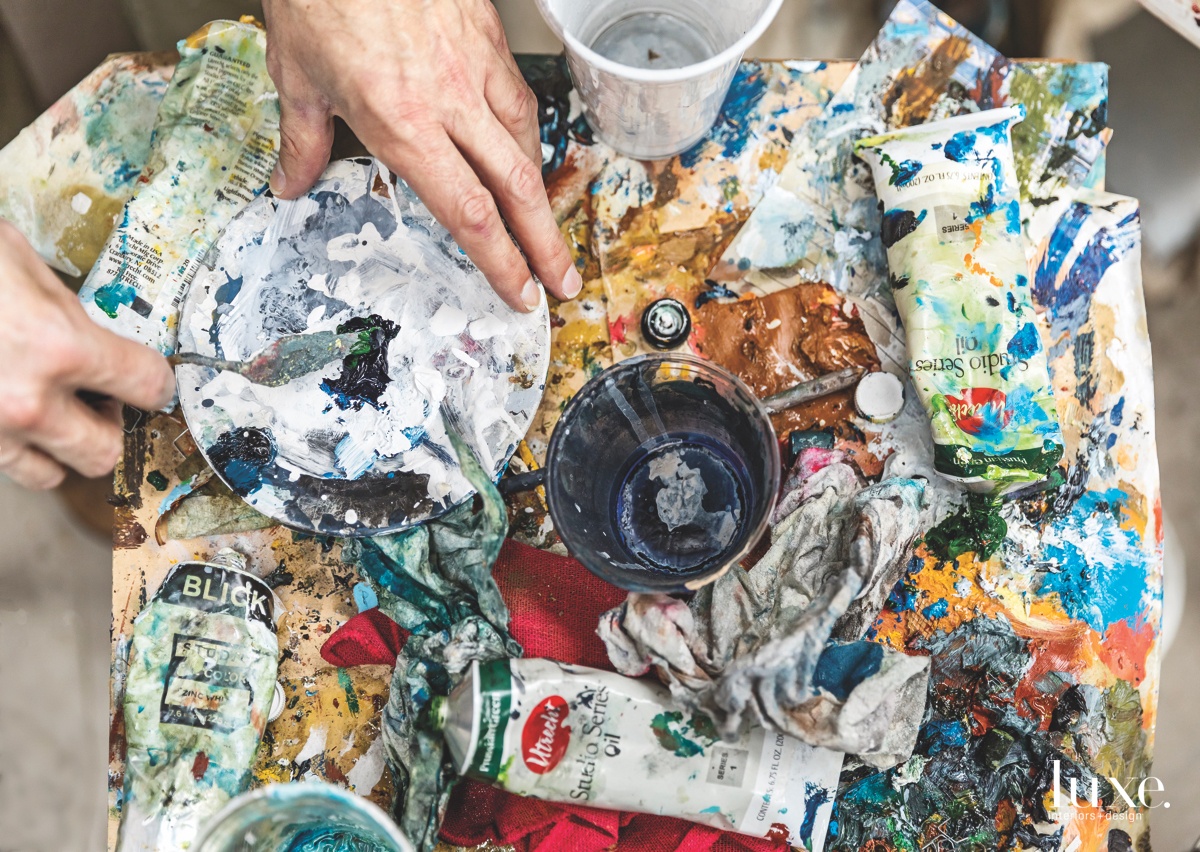 The artist's work space includes a large table-turned-palette--covered in paint tubes, oils, turpenoid, plates and more--where he mixes his paints.

The artist's work space includes a large table-turned-palette--covered in paint tubes, oils, turpenoid, plates and more--where he mixes his paints. 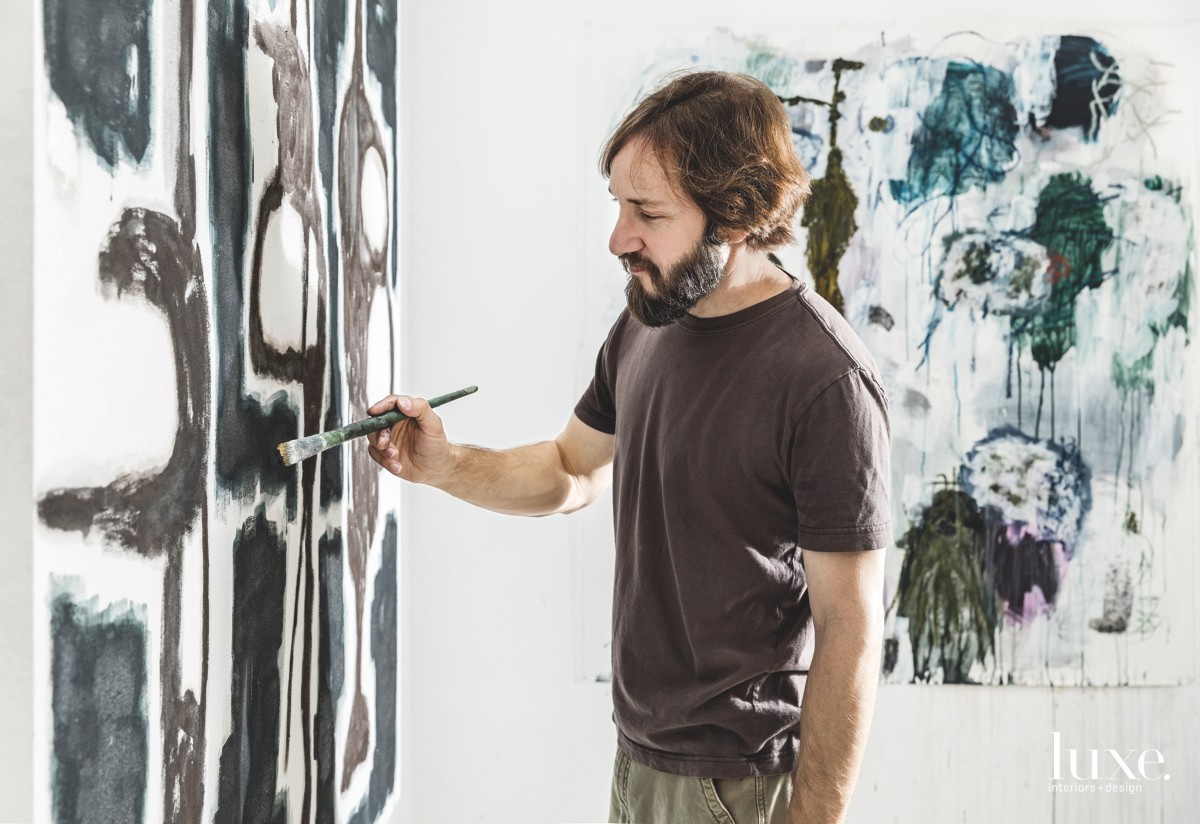 In that endeavor, Battle seeks inspiration in nature. He credits stints living in Jackson, Wyoming, and Taos, New Mexico, as huge influences and, most recently, enjoys hiking with his sketchpad on a heavily forested 10-acre family property. “When I’m in nature, I think about how the natural world functions and how that relates to human life,” he explains. “It’s unpredictable.” One simple genetic mutation, for example, “might lead to an entirely different branch in the tree of life,” he says.

Exploring that idea through his art, Battle incorporates into his paintings disparate elements that each have a unique trajectory, some becoming buried and others more prominent. “A new form appears,” he says, “which leads to the next form.” Just as nature evolves, Battle continues to build layers of paint, sometimes covering forms he may have previously created, but all of it remains in existence underneath the surface level–even if it’s not visible.

Further drawing nature into his work, Battle often applies paint using sticks or even his hands instead of conventional brushes. Just like his college days, he also works on canvases or large sheets of paper stapled to the walls–only now, the paper lines his 1,200-square-foot studio. “I enjoy working on paper because of the immediacy and texture of it,” he says. Within his studio space–behind the home Battle shares with fiancee Layla Luna, also an artist, and their 9-year-old daughter, Persephone–a color-splotched table covered with rolled-up paint tubes, crumpled rags and other materials juxtaposes the gallery-like feeling. Battle notes that an “awareness of how light changes” through the studio’s skylights as clouds pass in front of the sun also keeps him linked to natural time and rhythms.

Battle, whose work is represented by Herold Fine Art in Dallas and occupies the homes of collectors nationwide, hopes his artwork and the concepts it explores resonate with people in the same way a poem or a piece of music might, offering a constant source of reflection and yielding new insights over time. “Art can bring that same sense of meaning and understanding, which gives me a lot of fulfillment,” he says. “It’s why I’m always experimenting, always moving forward.”