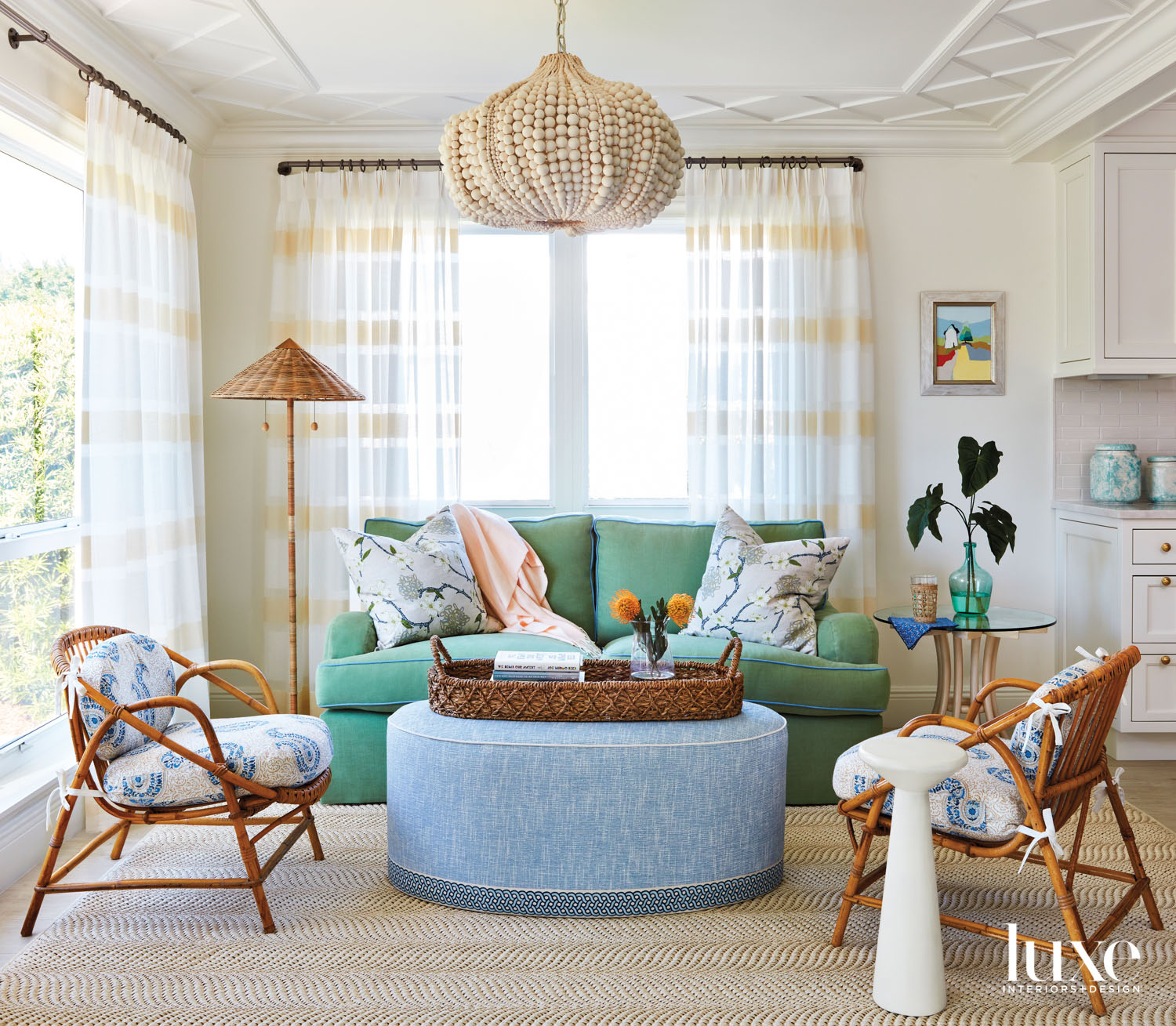 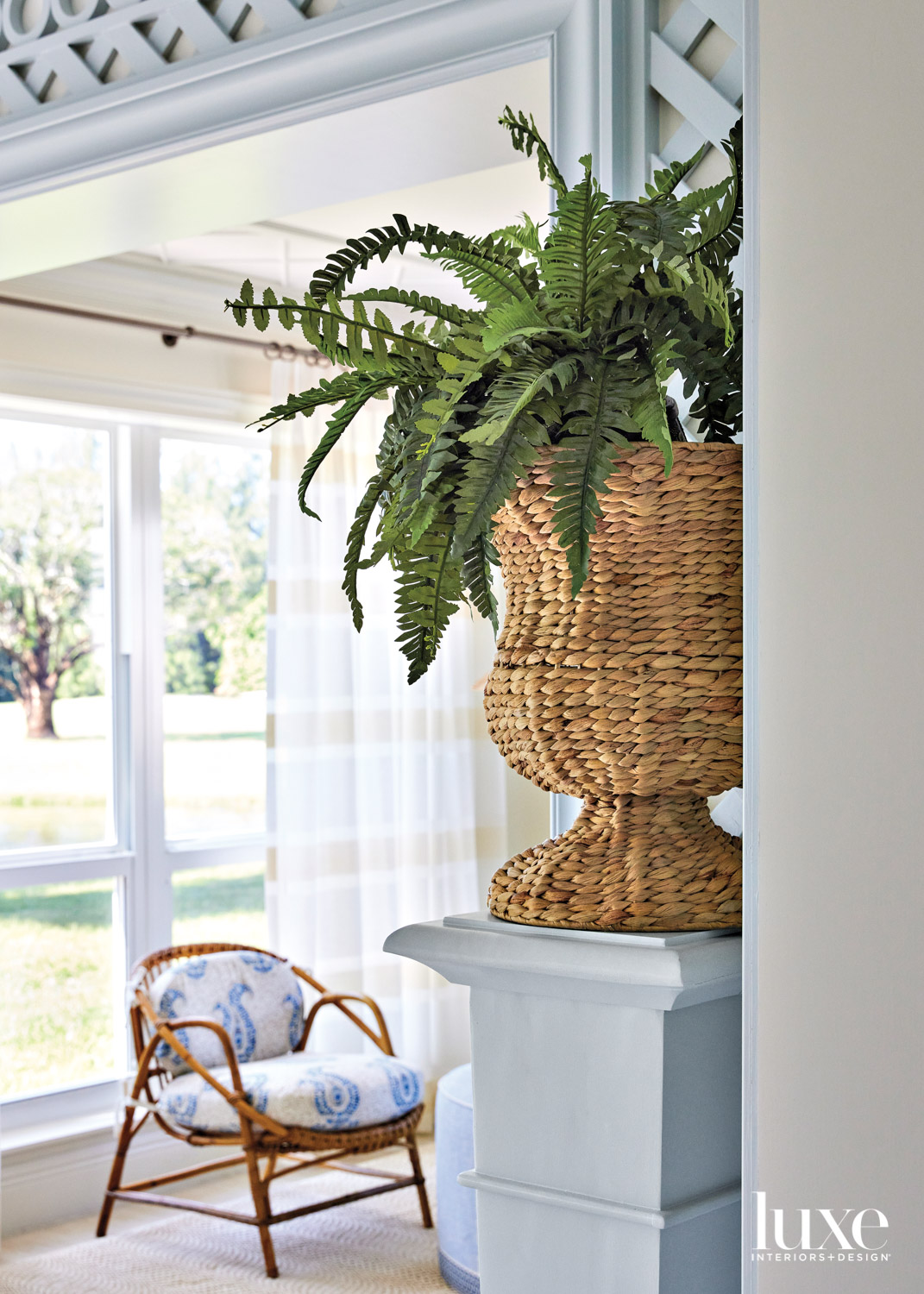 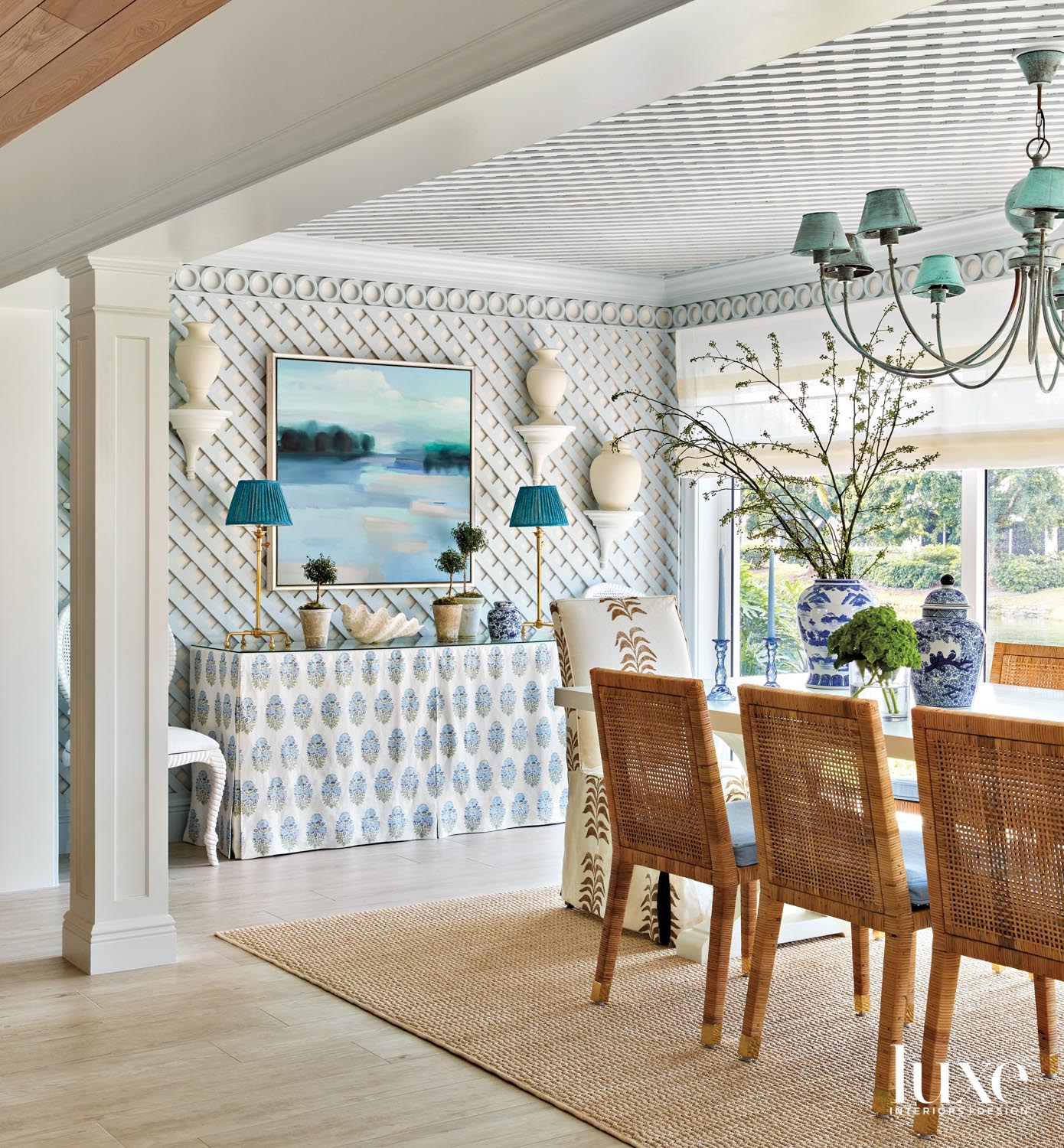 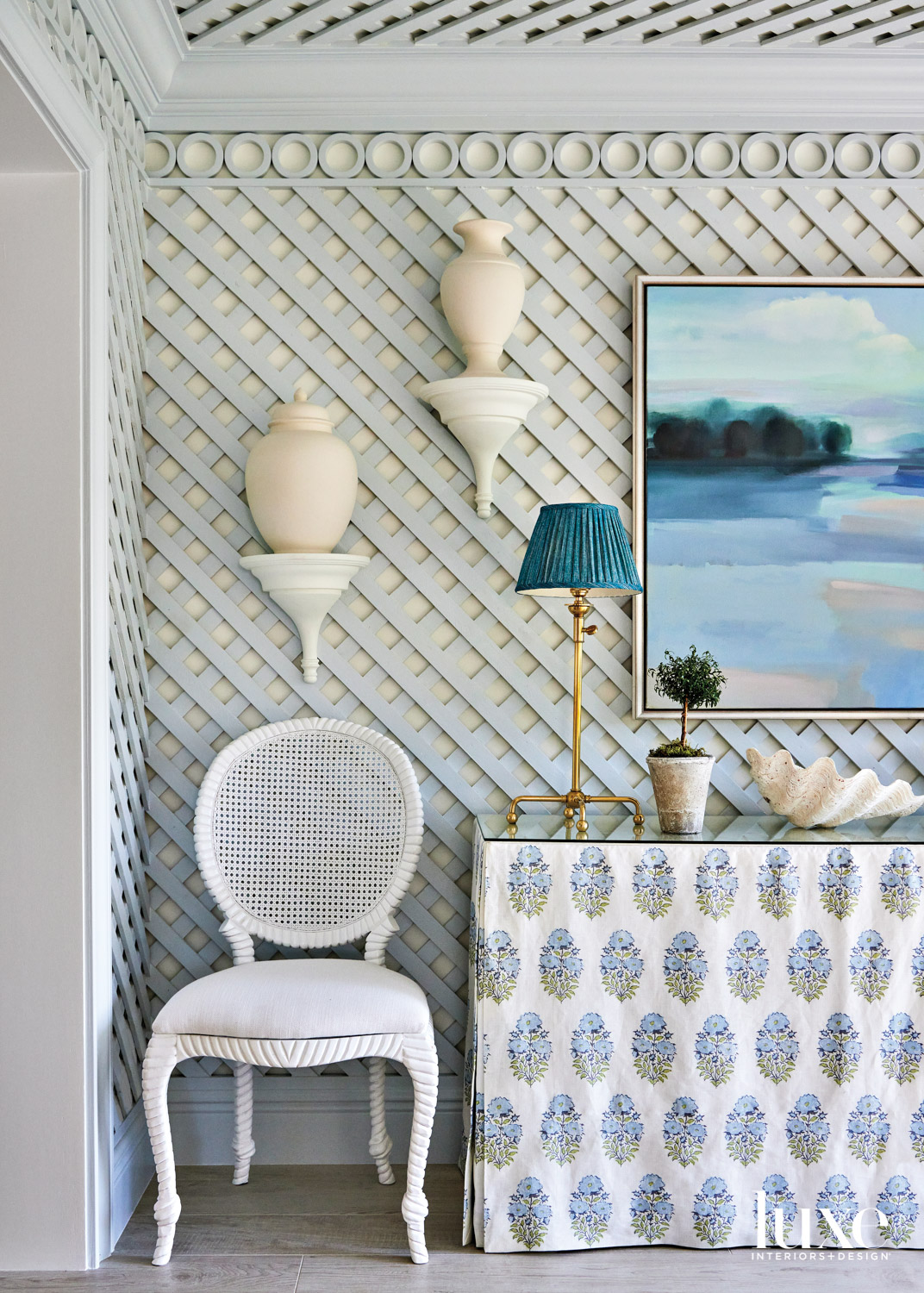 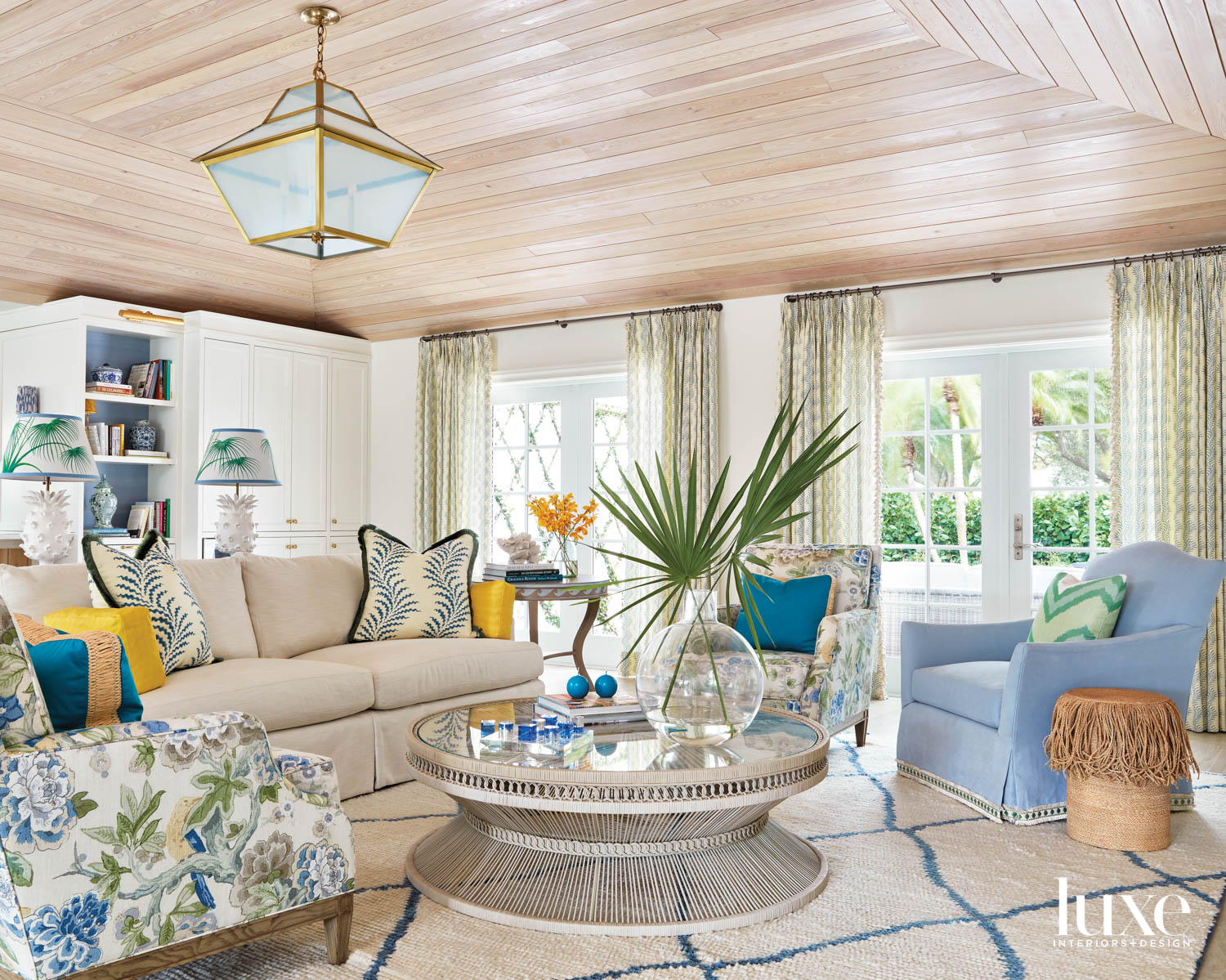 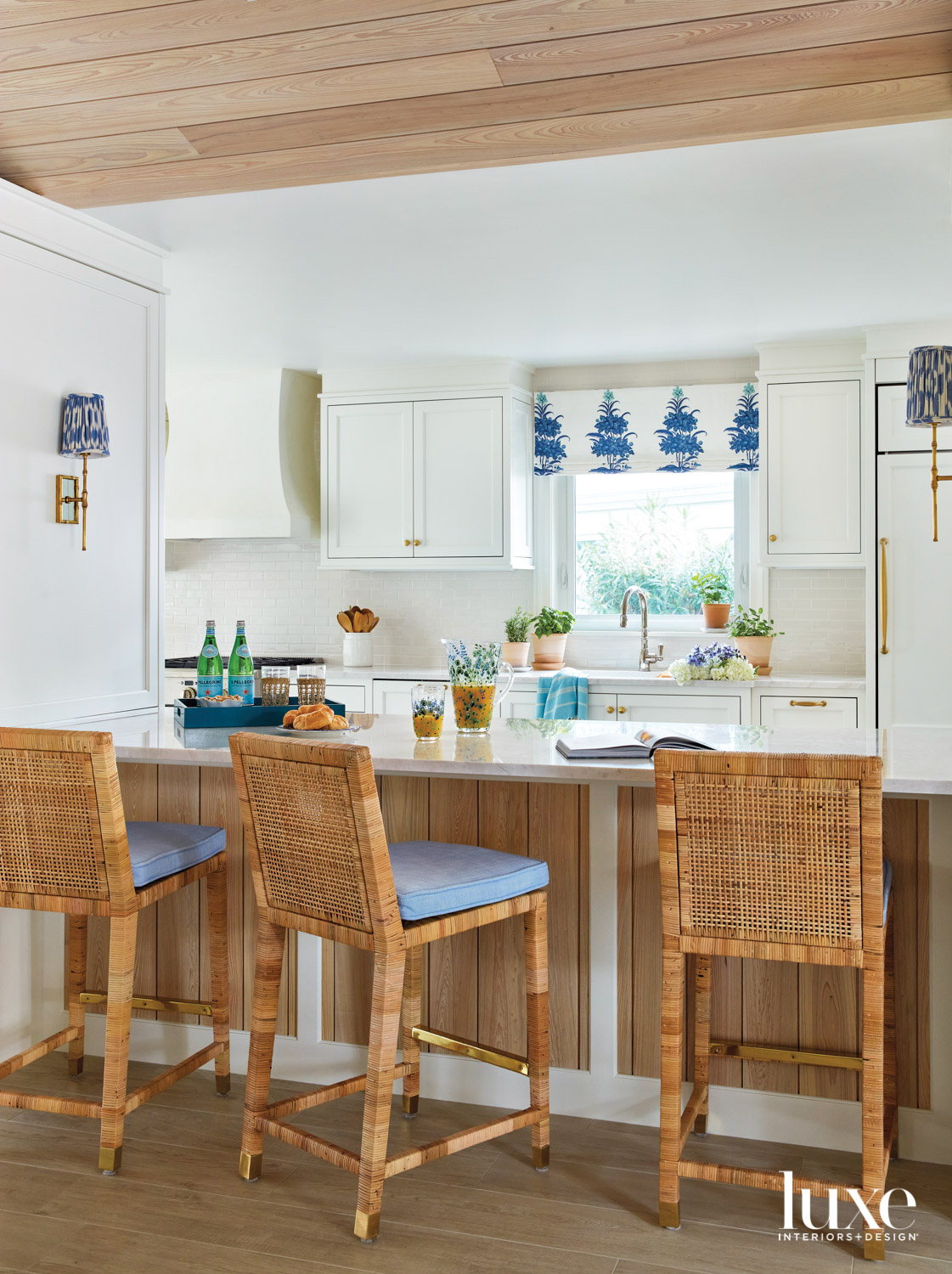 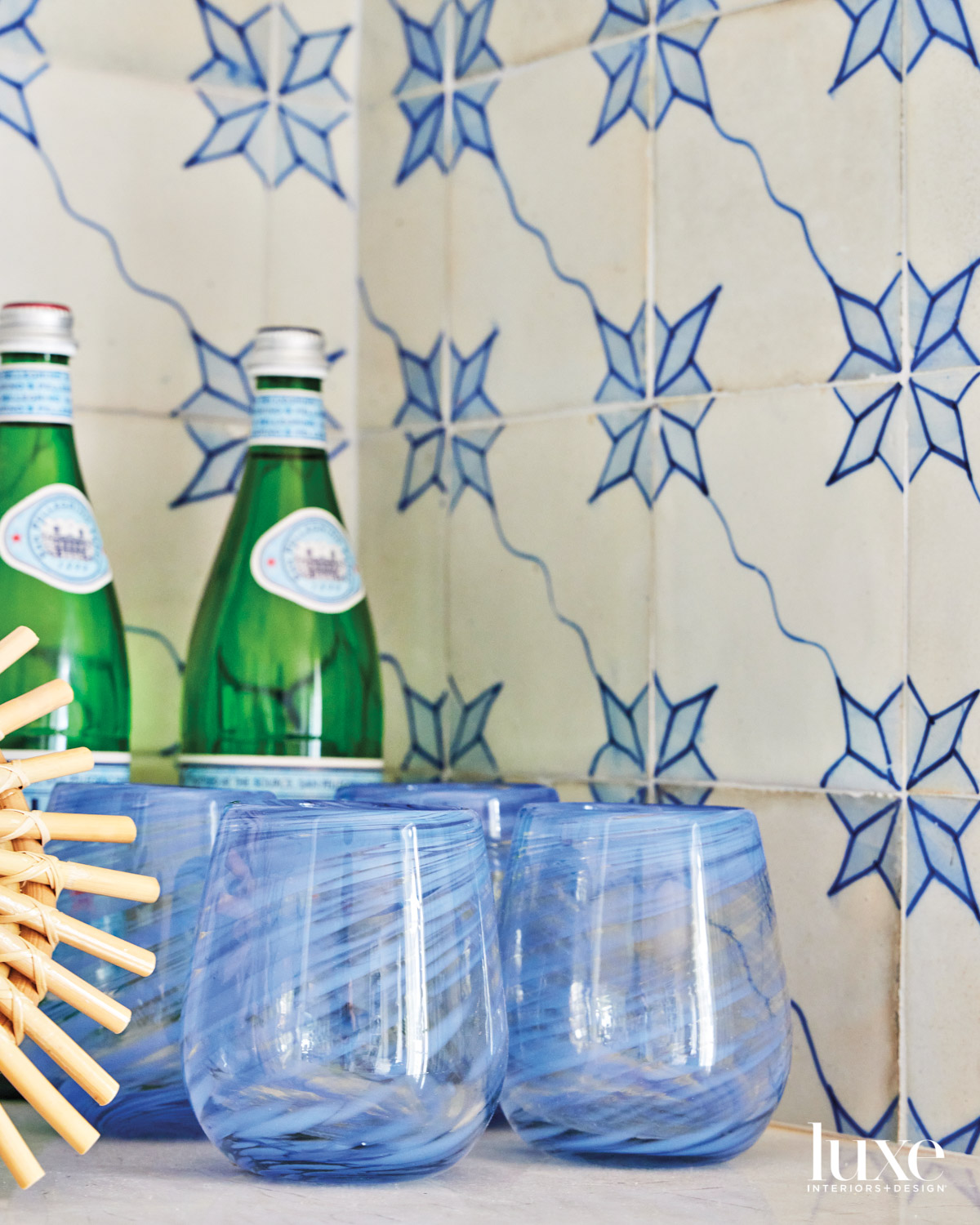 An enclosed cabinet at the entry conceals a bar lined with 19th-century Portuguese tiles from Solar Antique Tiles in New York. “It shows its age—it’s not perfect, but it’s really stunning,” Davis says of the tile. “It sort of feels like the ocean or a coastal place, but it’s got depth, character and personality.”

An enclosed cabinet at the entry conceals a bar lined with 19th-century Portuguese tiles from Solar Antique Tiles in New York. “It shows its age—it’s not perfect, but it’s really stunning,” Davis says of the tile. “It sort of feels like the ocean or a coastal place, but it’s got depth, character and personality.” 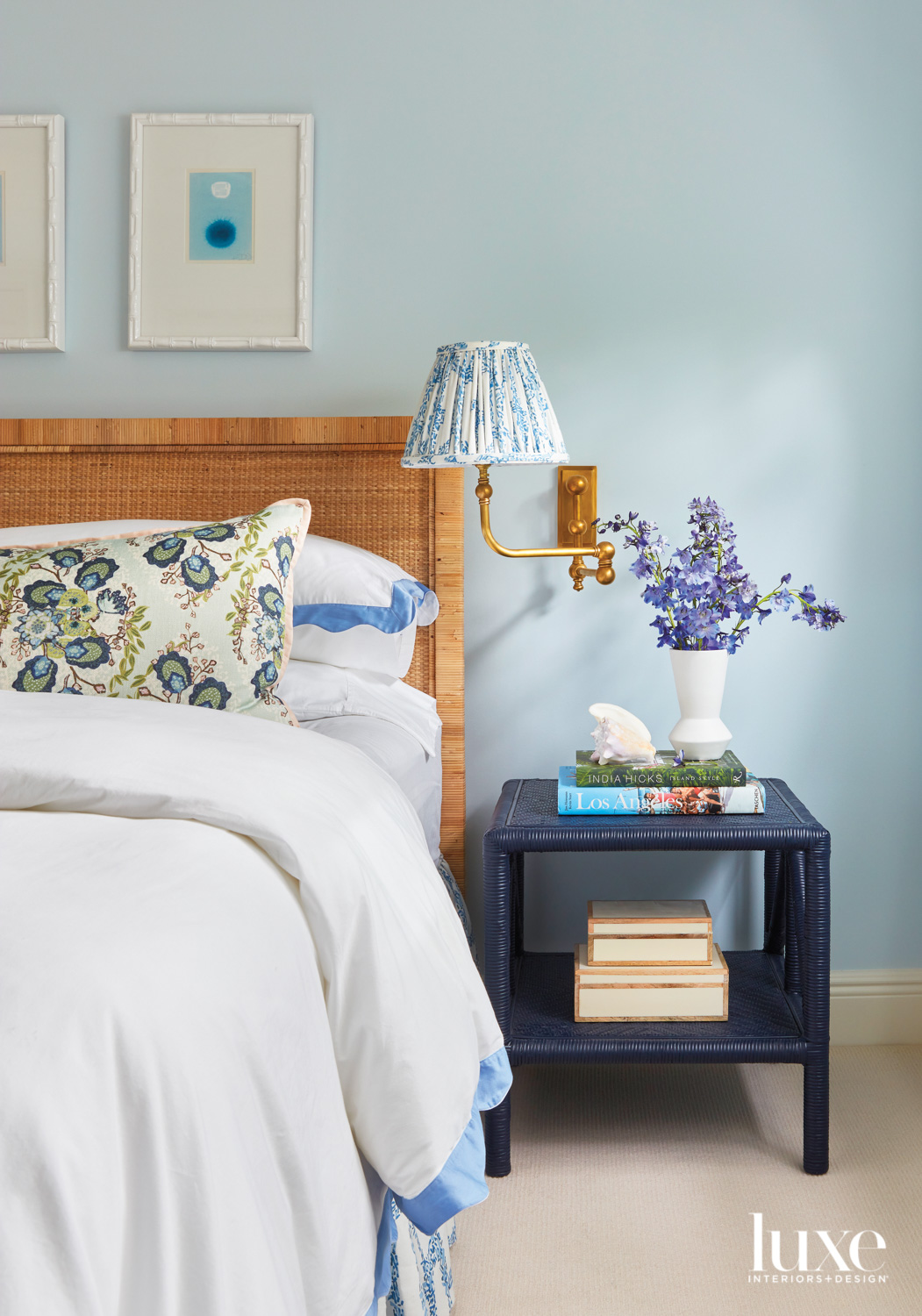 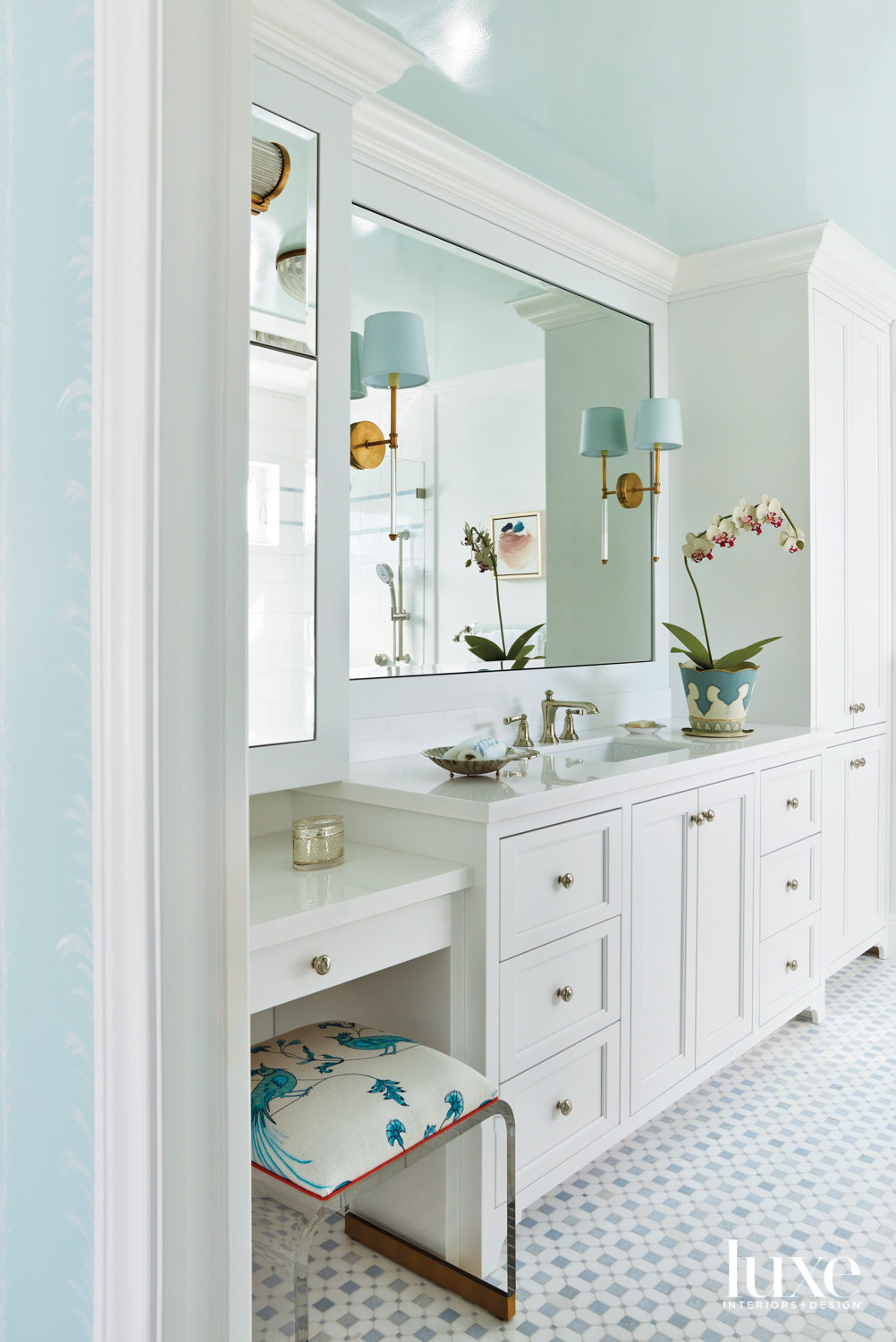 The 1970s Boynton Beach residence Kit and Nancy Tatum intended to renovate as their vacation house started out humbly enough. It had original tile floors, a textured ceiling and carpeting in the main bathroom. “It was the epitome of a South Florida builder-grade home,” recalls their designer, Courtney Davis. “And it was begging to be updated.”

The property is nestled in a golf course community, so it didn’t seem right to pursue a typical coastal look, Davis explains. “We didn’t want it to feel like a beach house, but we did want it to feel like a Florida home,” she says. The abode also needed to reflect the Tatums’ new stage of life, a departure from their larger, more traditional permanent residence in New Hampshire. “Courtney and I set out to create a comfortable space that is both classic and beautiful,” Nancy says. They envisioned an Old Florida-style garden house that feels fresh and welcoming, with wow factors throughout.

They began with the structure’s bones. General contractor John Prendergast took the home down to the studs and, while keeping the layout roughly the same, added a bathroom, reworked doorways and openings, leveled floors and removed and lined walls. “We took it all the way down and then had to put it back together again so we could add the layers of design we wanted,” Davis says. “We were giving the house a soul where there really hadn’t been one before.”

Moldings and trim now infuse each space with character, as do ceiling treatments, including cypress over the living area. “We added intention to the architectural design through these somewhat small but very important changes,” Davis says. New built-ins also add personality: Where a wall once stood, double-sided cabinets face the kitchen on one side and, on the other, serve as bookcases backed with a blue grass-cloth wallcovering for the living area. Another set of cabinetry defines the entry and conceals a bar lined with a patterned antique tile. “It’s this little special jewel box of a spot, and it’s one of the first things you see when you walk in the door,” Davis says. “It sets the tone for the house.”

The showpiece is in the back of the residence: the dining room, lined on its walls and ceiling with an unexpected powder blue lattice. This enchanting space is also the home’s greatest surprise transformation, as it was formerly a step- down, screened porch. “It was an important part of the house that we had to reclaim,” Davis notes. Blurring the line between inside and outside, the room features end chairs and a console table with botanical fabrics to enhance the garden feel. Oversize sheer Roman shades decorate the two sets of sliding doors that open completely to the exterior, highlighting the backyard pond, the greenery and the swan that visits often. “You can’t decide: Are you in an inside space or an outside space?” Davis muses. “Either way, it’s beautiful— and you’d like to sit down.”

The designer created multiple seating areas throughout the residence, including a morning room next to the kitchen furnished with a beaded chandelier, a green sofa and a pair of caned chairs. To capture a subtle sense of place, she incorporated nods to Florida in unexpected ways, like the living area’s blue rattan console table, lampshades with hand-painted palm fronds and Talavera pottery that lines the bookcases.

The color scheme was kept within a narrow scope of blues and greens, creating a smooth flow. “Because of the simple color palette, we had to be intentional with making little statements throughout each space so the house didn’t fall flat,” Davis explains, “so we used different patterns and played with scale.” She outfitted bedrooms with airy wallpapers, accented the living area’s traditional blue floral-printed chairs with pillows in modern punches of yellow and bright teal and played with surfaces, including painting the ceiling of the main bathroom a high- gloss opal lacquer.

As the project’s finishing touch, Nancy selected the artwork for the residence. “I have a new passion of art collecting since this experience,” she says. It’s this kind of inspiring mentality Davis hoped to cultivate for the Tatums in their inviting vacation home. “They wanted it to be a place that people could drop by—and, quite honestly, people do,” she says. 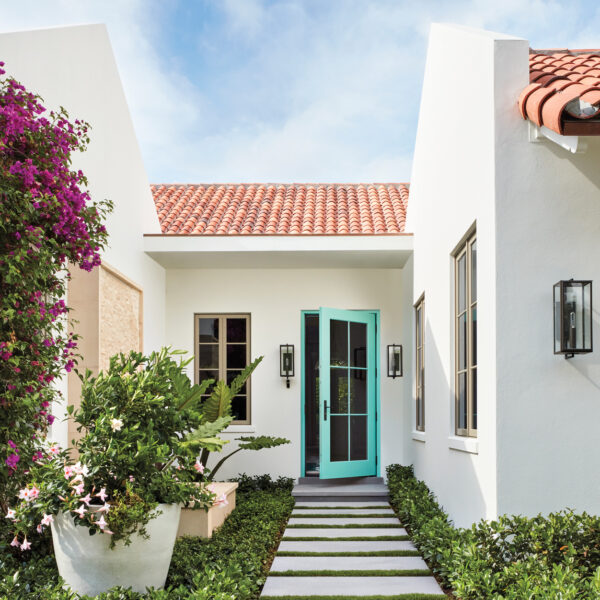 How A 1970s Palm Beach House Transformed Into A Tropical Retreat 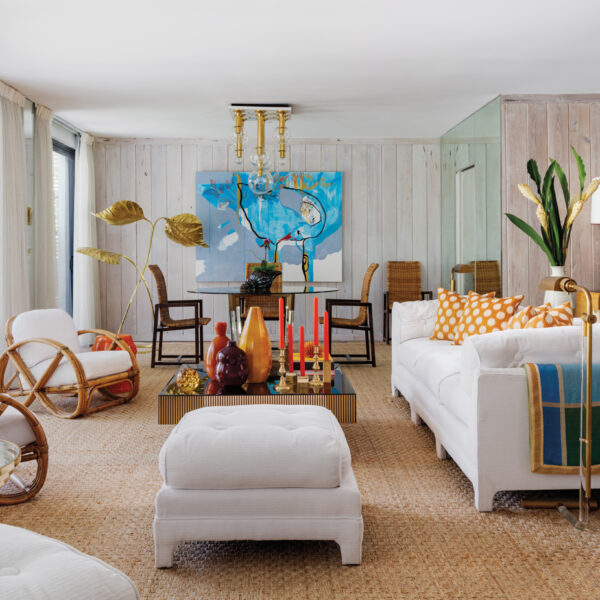 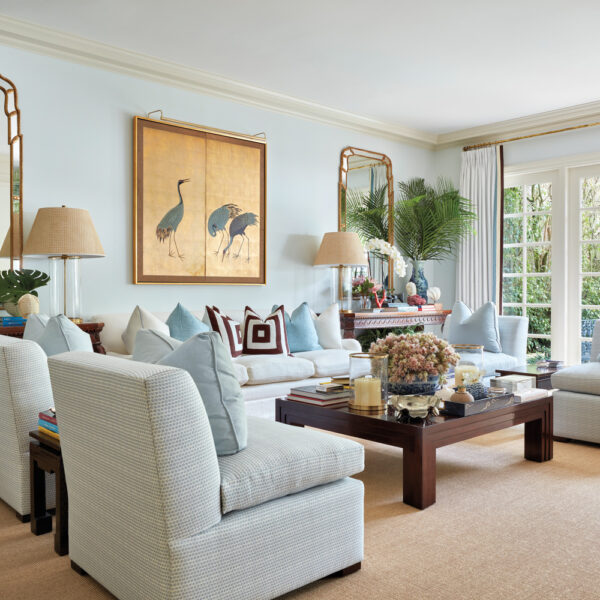 Inside A Classic Palm Beach Home That Masters Casual Elegance 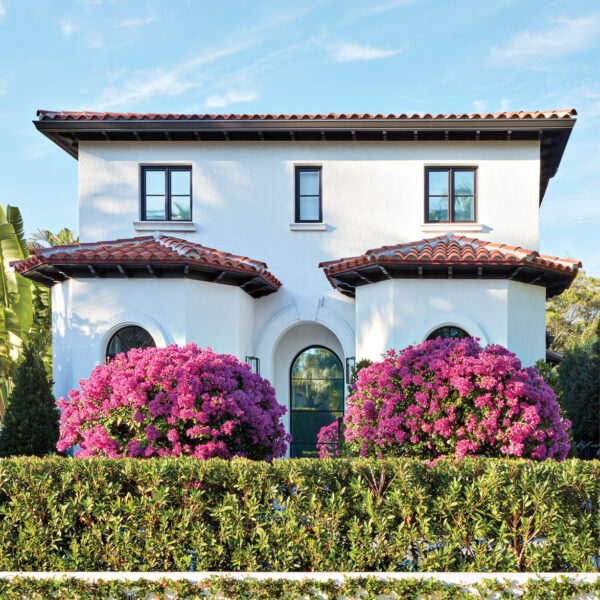 Behind Its Old-World Façade, A Modern Palm Beach Home Emerges 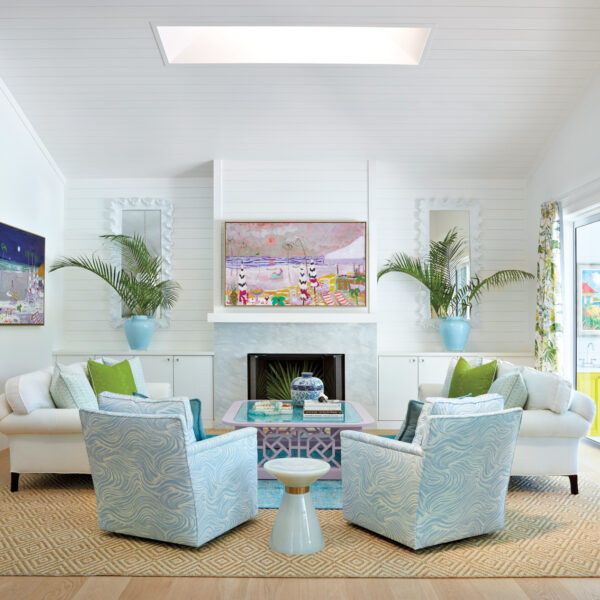