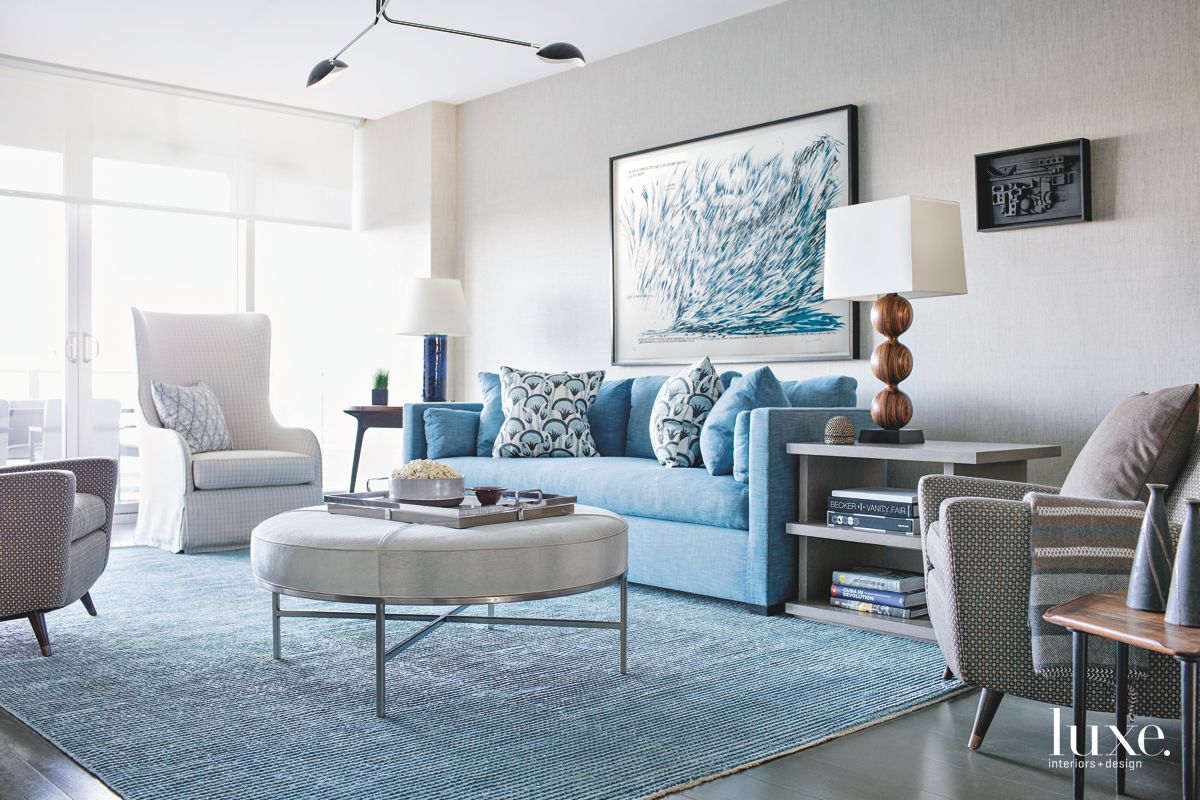 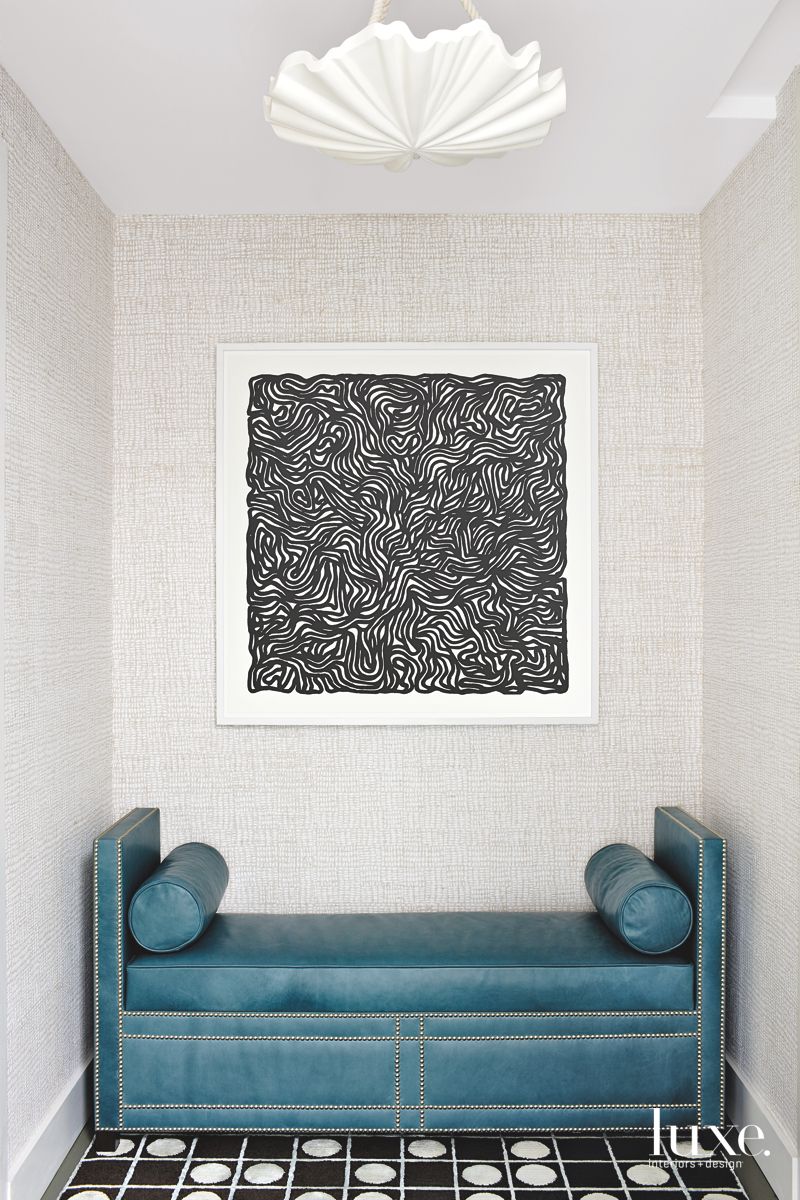 Many of the home’s furnishings were conceived and fabricated by designer John De Bastiani and his firm, including the Coco bench in the apartment’s elevator vestibule that doubles as storage for beach shoes. The artwork is by Sol LeWitt.

Many of the home’s furnishings were conceived and fabricated by designer John De Bastiani and his firm, including the Coco bench in the apartment’s elevator vestibule that doubles as storage for beach shoes. The artwork is by Sol LeWitt. 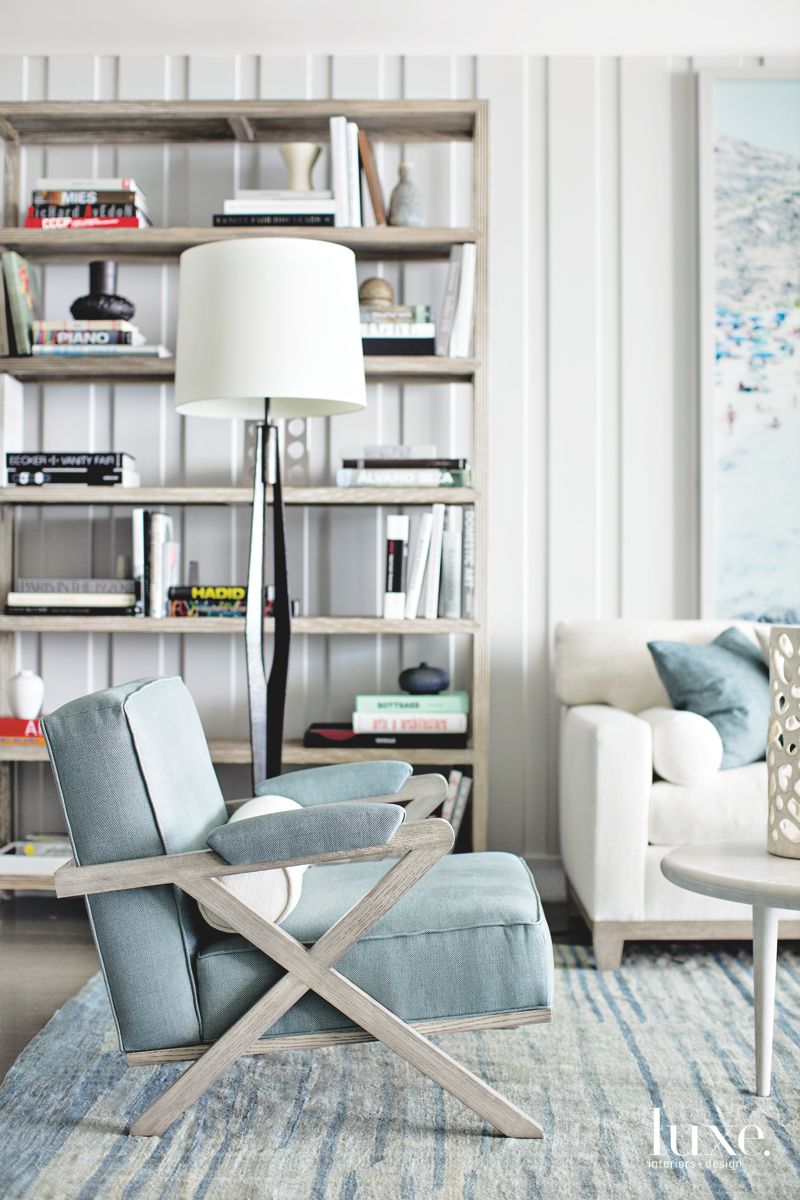 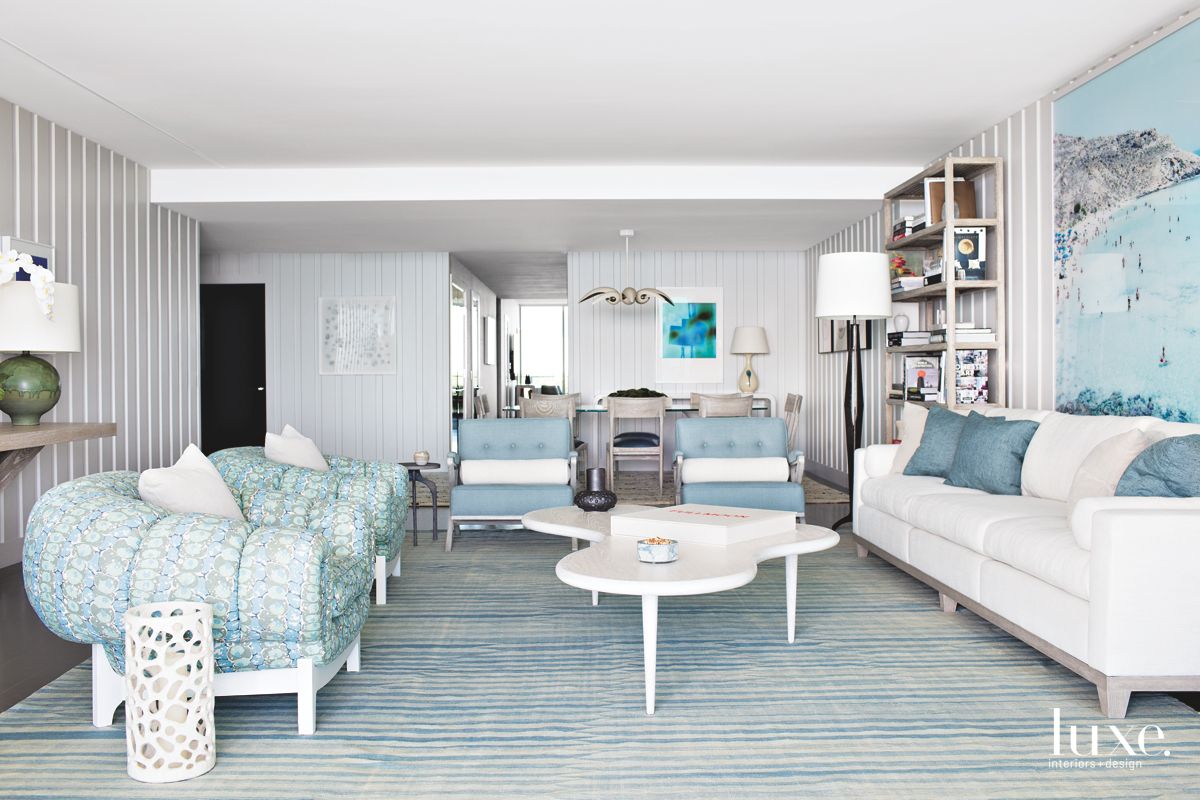 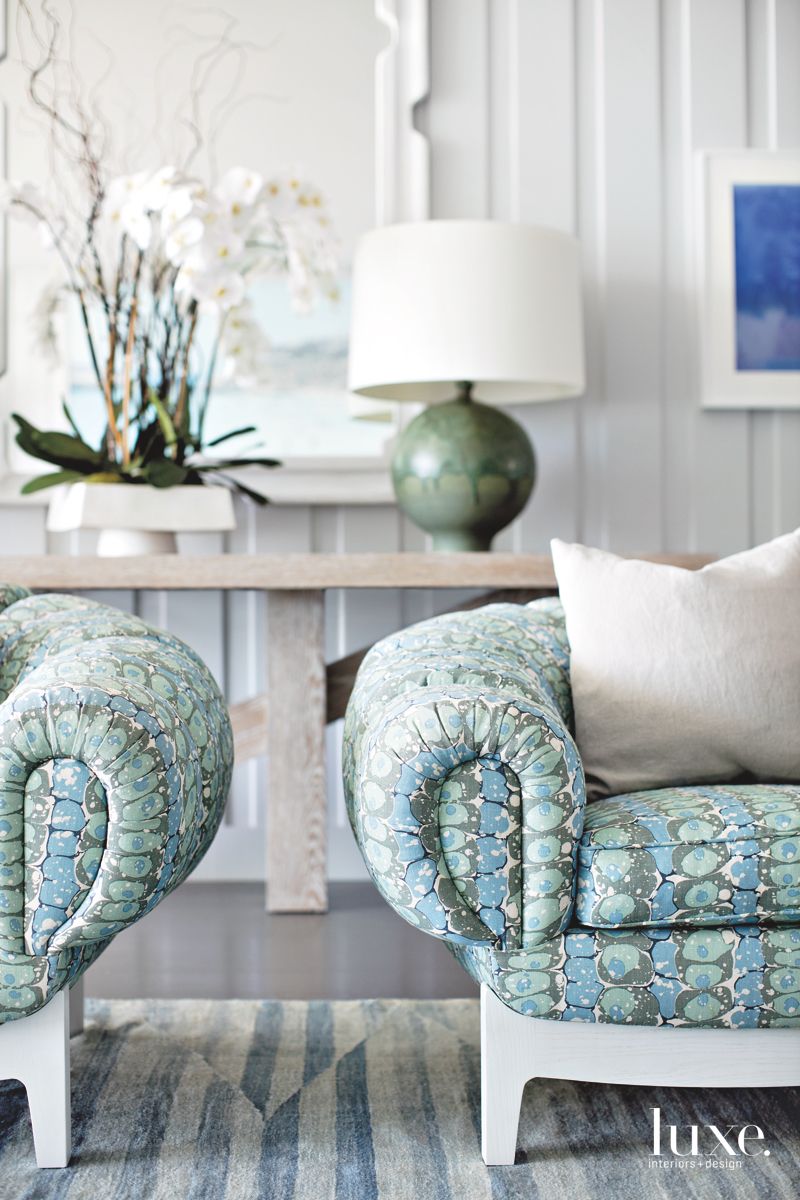 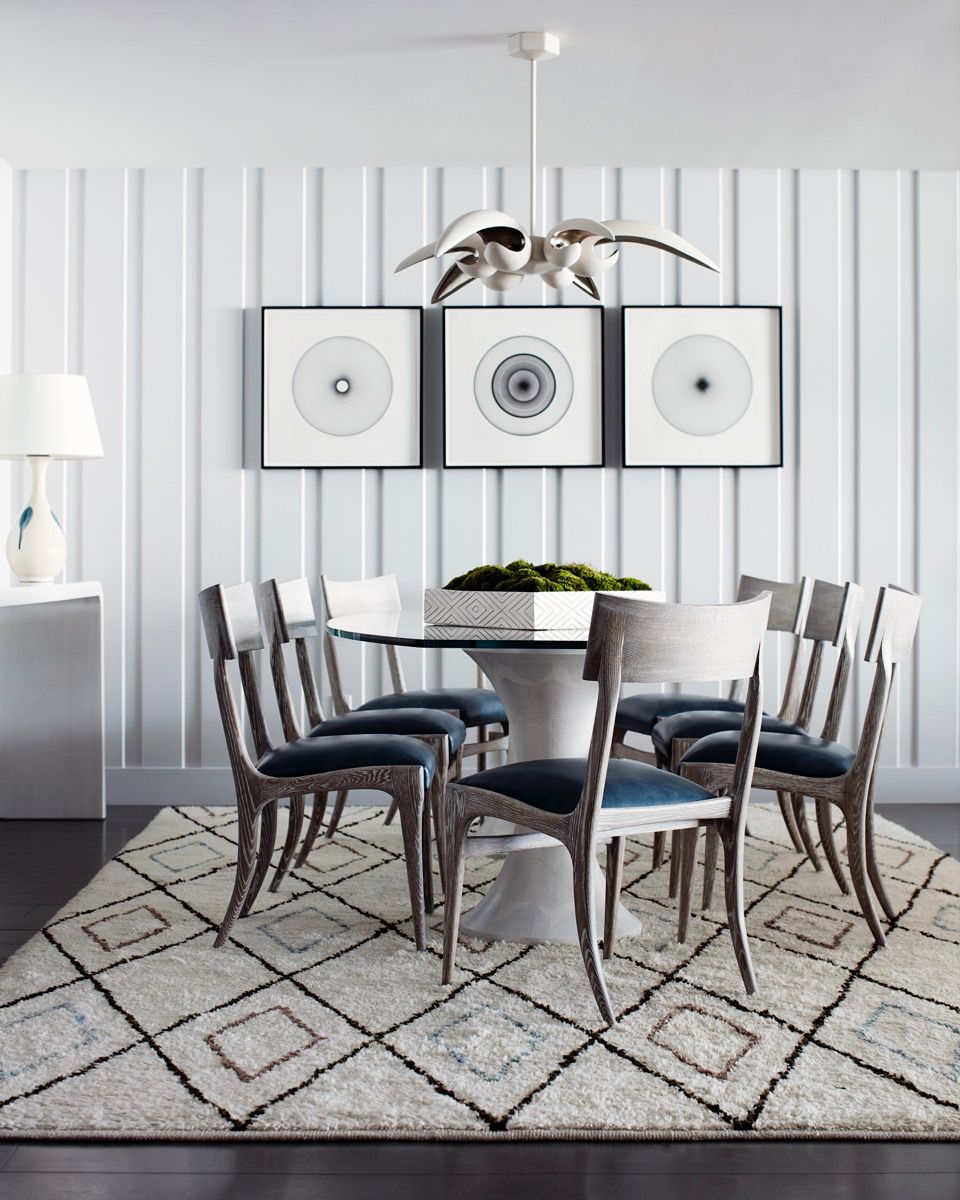 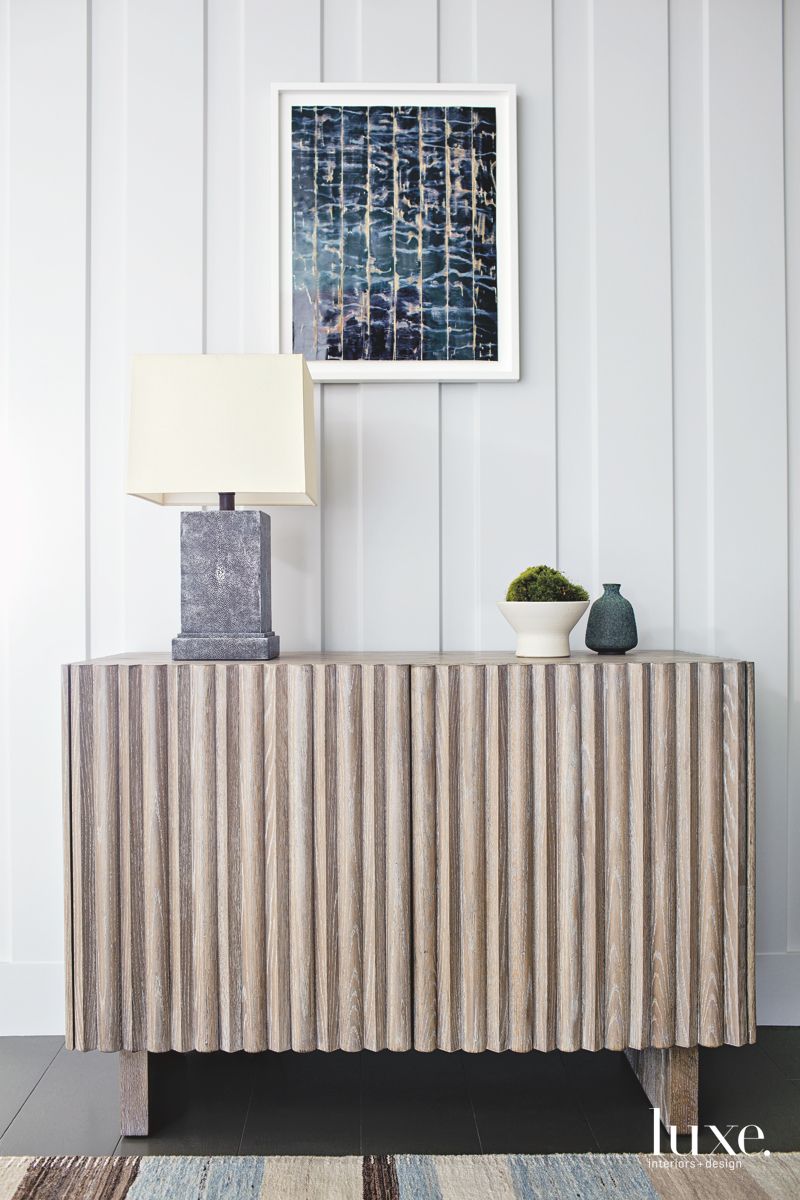 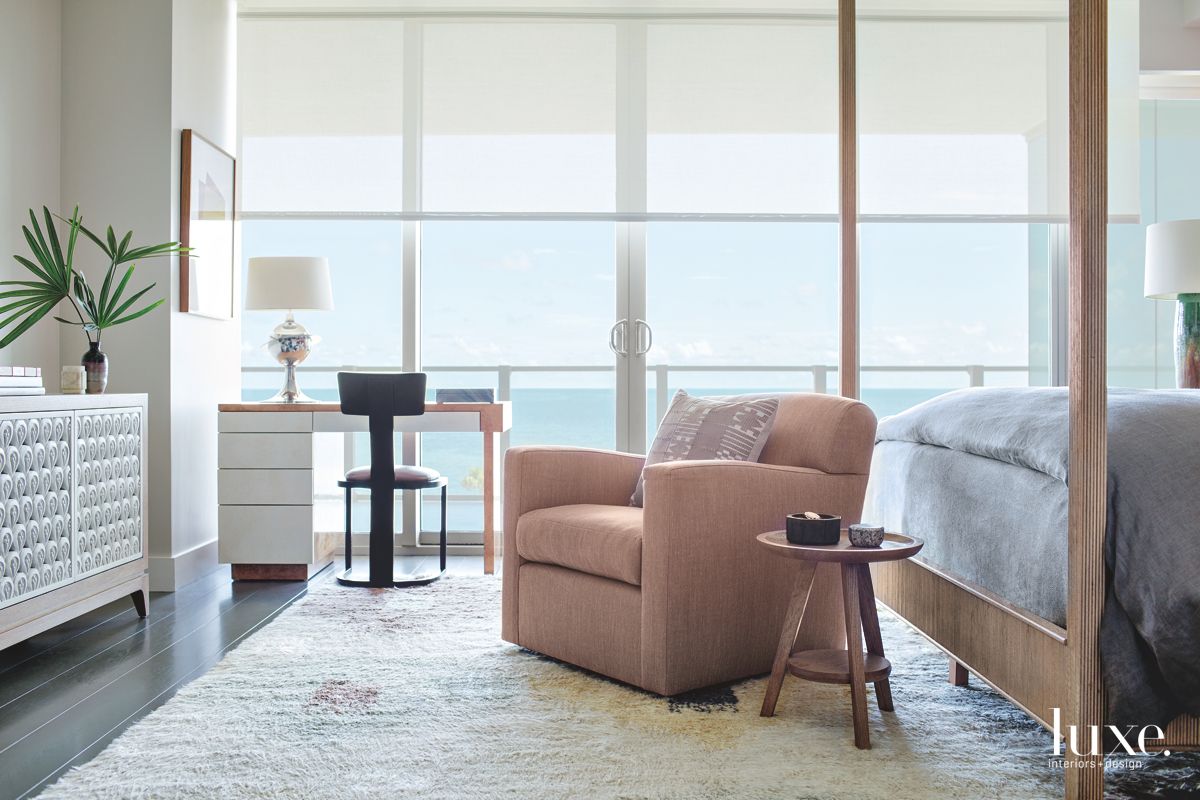 In the master bedroom, a swiveling armchair by Prestigio Custom Furniture mixes with a four-poster bed, a Saucer occasional table, an Art Deco desk with parchment drawers and a Teardrop cabinet, all by De Bastiani.

In the master bedroom, a swiveling armchair by Prestigio Custom Furniture mixes with a four-poster bed, a Saucer occasional table, an Art Deco desk with parchment drawers and a Teardrop cabinet, all by De Bastiani. 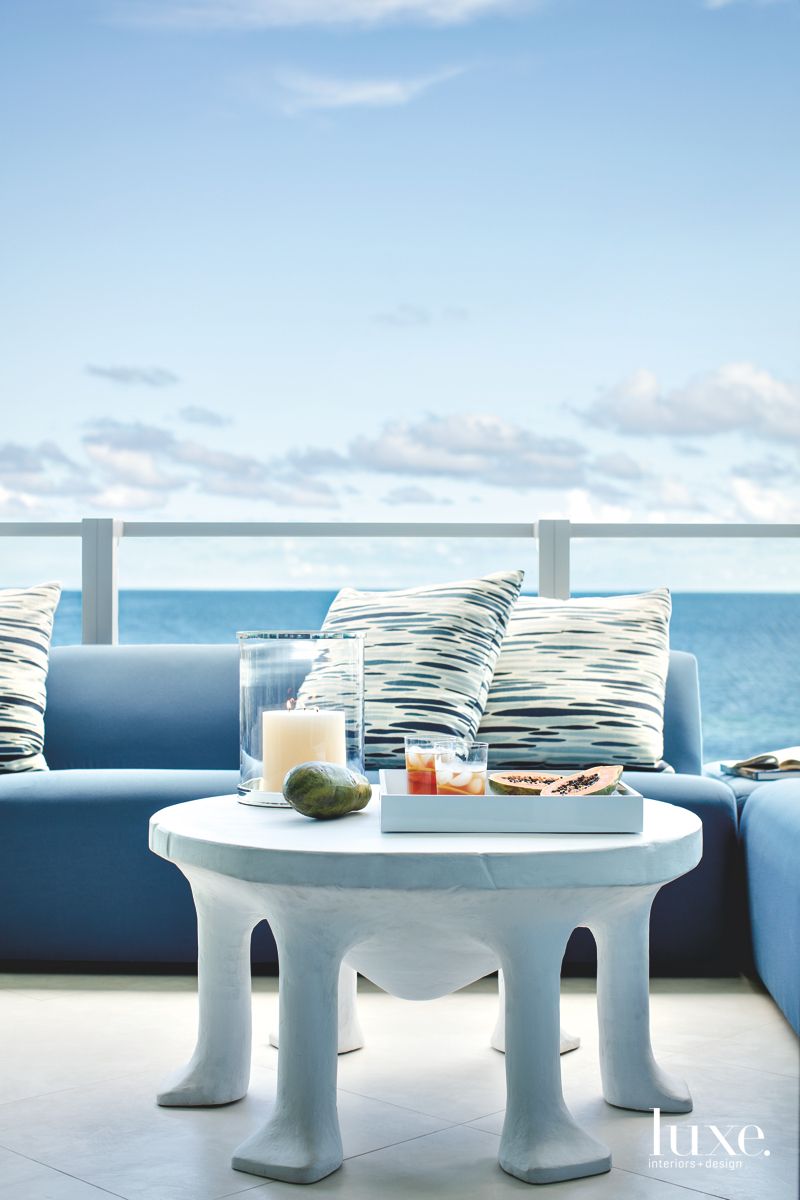 As an artist transforms a blank canvas into a feast for the eyes, Los Angeles designer John De Bastiani turned a big white box of an apartment into a visually stunning pied- à-terre in Key Biscayne. When conceiving his opus, he decided to take the interiors in a somewhat more modern direction than what the owner was used to, envisioning an aesthetic that would speak to its coastal setting. “I thought, ‘It’s in Miami; it shouldn’t be traditional,’ ” he explains. “But my version of modern is very organic, not super-sleek. It’s more about shapes and silhouettes of furniture. It’s modern, yes, but with more traditional fabrics to bring it back to the middle a bit.”

The selection of two large Jean de Merry chairs for the living room set the palette of the interior space. Spotting them in the showroom in distressed brown leather, De Bastiani customized them in a different direction, upholstering them in a highly patterned blue- and-green fabric and whitewashing the bases. “They became a whole different thing,” he says with delight. “They fit the scale of the room, which was massive, and helped establish a connection with the ocean by bringing the feeling of water into it.”

From there, the room evolved into what De Bastiani describes as “a little bit of a retro Florida look, but done in a sedate, contemporary way.” A pair of X-base chairs with a nautical feel join pieces De Bastiani designed himself, including a sinuous white coffee table and a white sofa with a bleached-out base that instills a coastal vibe reminiscent of the Hamptons. A photograph by Massimo Vitali, one of the significant art pieces curated specially for the project, anchors itself above the sofa. Open to the living room, the main dining area was given another, yet companionable, treatment. De Bastiani installed a pedestal dining table with a glass top in the shape of a surfboard and offset it with smart, geometrically patterned pieces, including a trio of artwork against the paneled wall and a Moroccan carpet underfoot. “It’s important when you’re dealing with something all white and simple to get something that adds sort of a textural feel,” he shares.

For the casual den—intended for kicking back and relaxing or watching movies with friends—De Bastiani specified a dark blue custom sofa, a modern rendition of a wing chair and a pair of midcentury club chairs and arranged them around a striking white cowhide ottoman/ coffee table. “So many people have to have every piece in the house feel like it’s something unique and different,” he says. “But when some pieces take center stage and others become part of the backdrop, it makes those standout pieces even more interesting.”

Like the living room, the master bedroom features a straight-on view of the ocean via floor-to-ceiling sliding glass doors, and De Bastiani wanted it to connect experientially, as well. “I gave it more of a ‘Miami’ feel, with a reeded four-poster bed that I designed and a soft mohair Afghan rug with a subtle pattern that picks up the pretty coral color of two swivel chairs,” he describes.

The overall result is a far cry from the empty shell first presented to De Bastiani—think concrete floors, zero moldings, sparse finishes, a basic kitchen and simple baths. “The idea was that people could bring in their own designers and visions,” he recalls. And so, working with little more than a request from the owner for hardwood floors and minimal construction, De Bastiani went about incorporating subtle yet effective changes to the interior prior to weaving in his furnishings program. “We built it out a bit by dropping the ceilings throughout to add lighting,” he says. “We added moldings, baseboards and automatic shades and put wood paneling in the living and dining rooms.” The work was facilitated by builder William Krekeler, who got things done in an efficient and timely manner. “He was fantastic,” says De Bastiani. “I could really count on him since I wasn’t in Miami all the time.”

Reflecting on the ultimate outcome of the project and the unique personality it took on, De Bastiani touches on his creative process. “When you add traditional elements into a more modern space, make it more organic and tactile, and mix in all kinds of wonderful contemporary art, it creates a whole different look,” he says. “It was exciting to see how beautiful it turned out. There is a real balance here.” 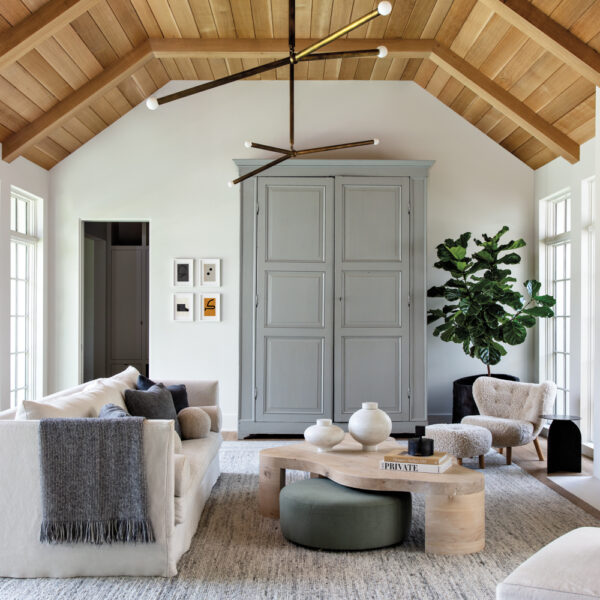 Minimalism Achieves The Maximum Effect In This Houston Dwelling 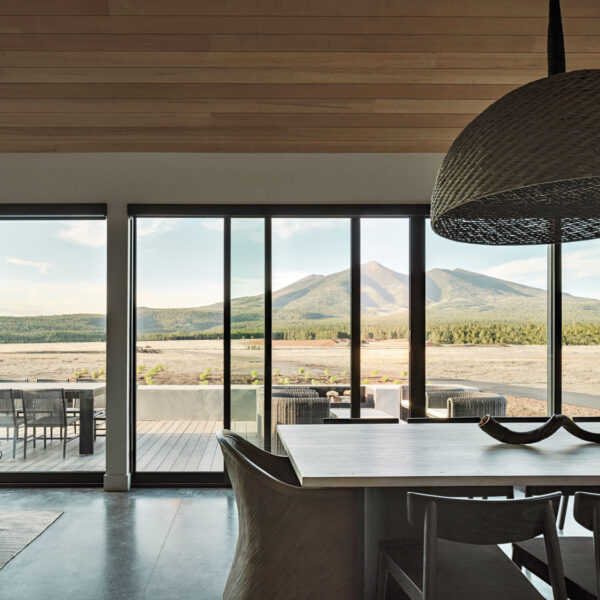 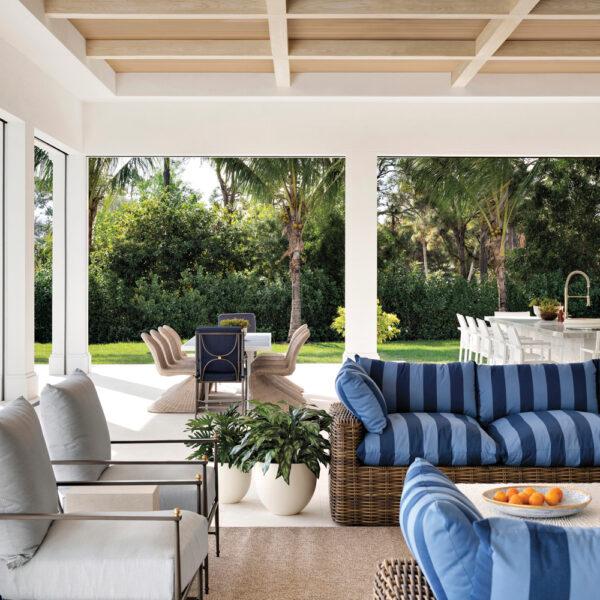 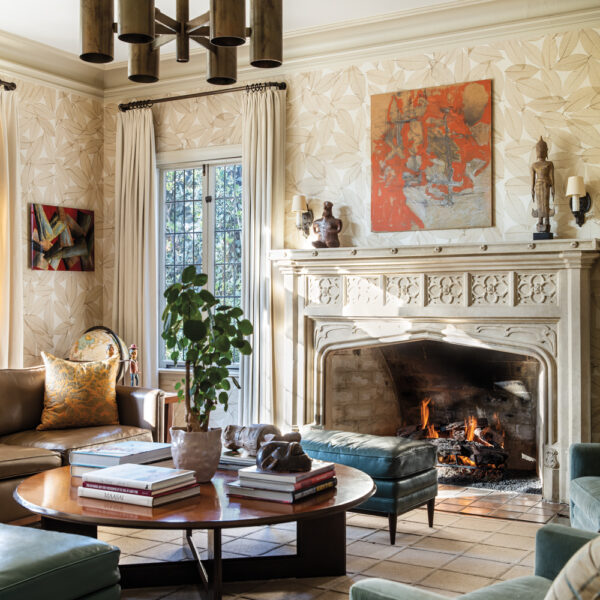 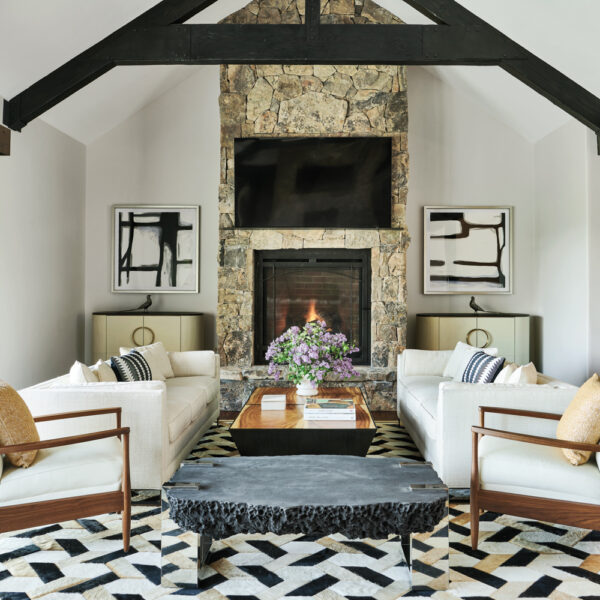 This Chateau’s Mesmerizing Transformation Is A Design Fairy Tale