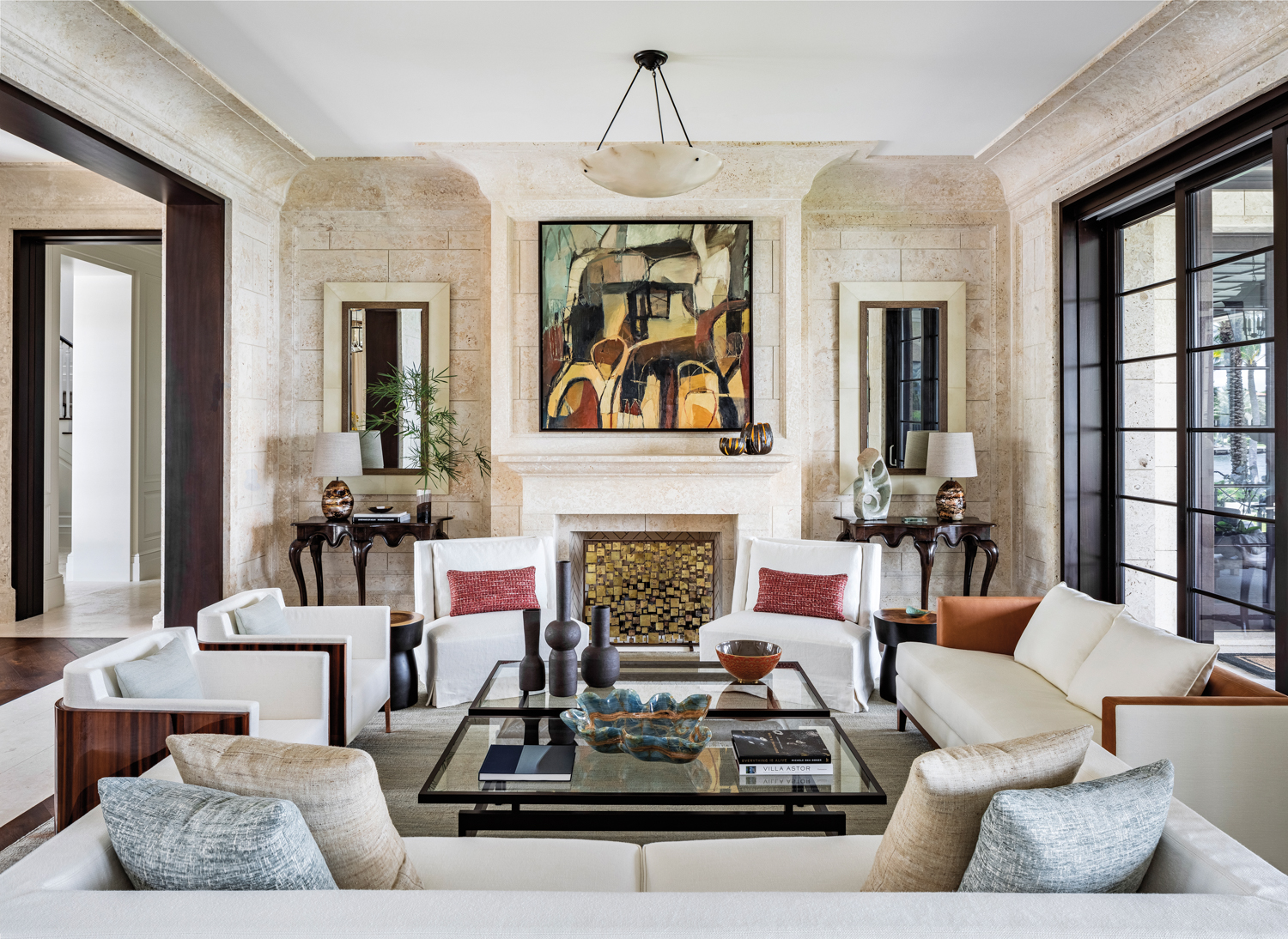 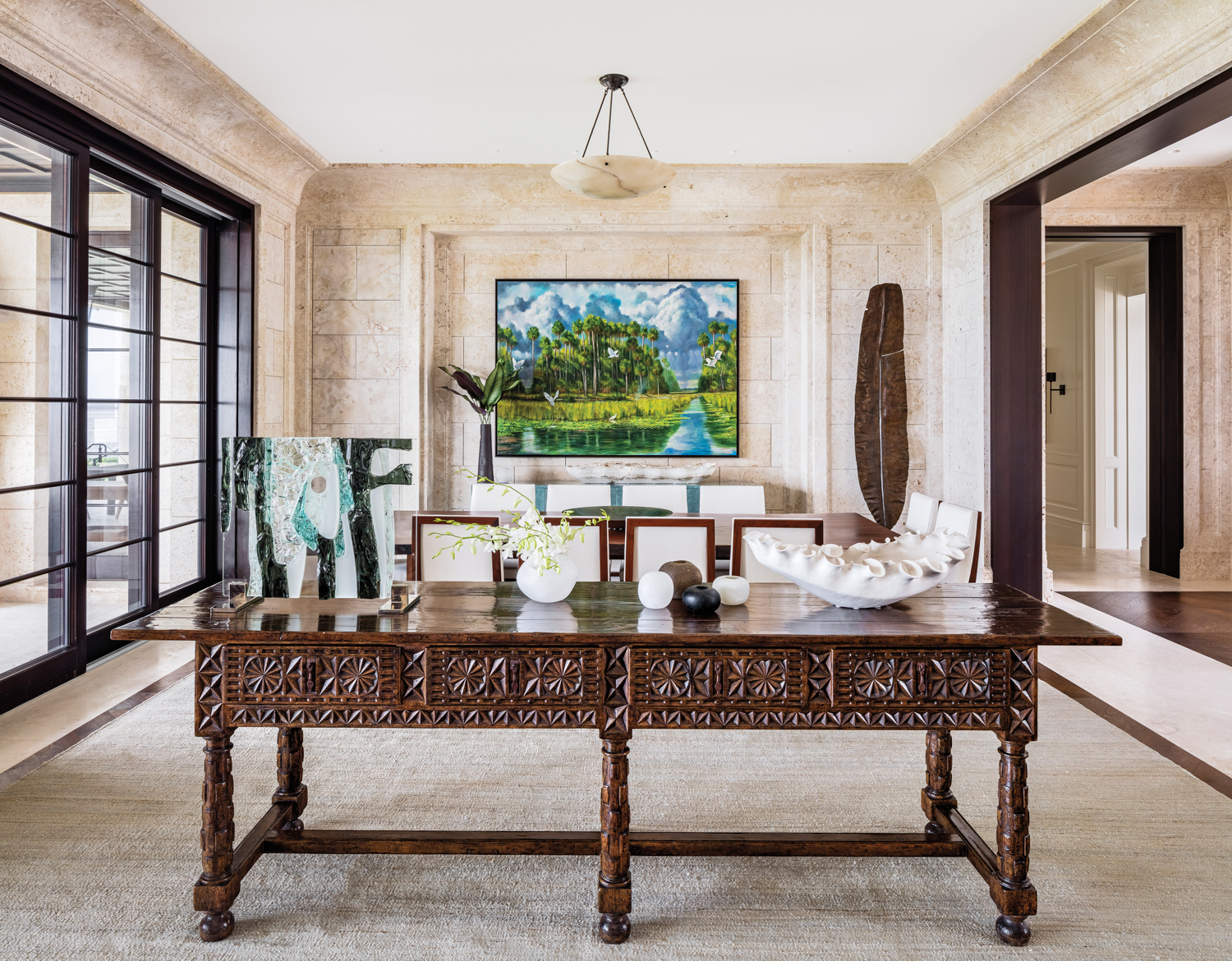 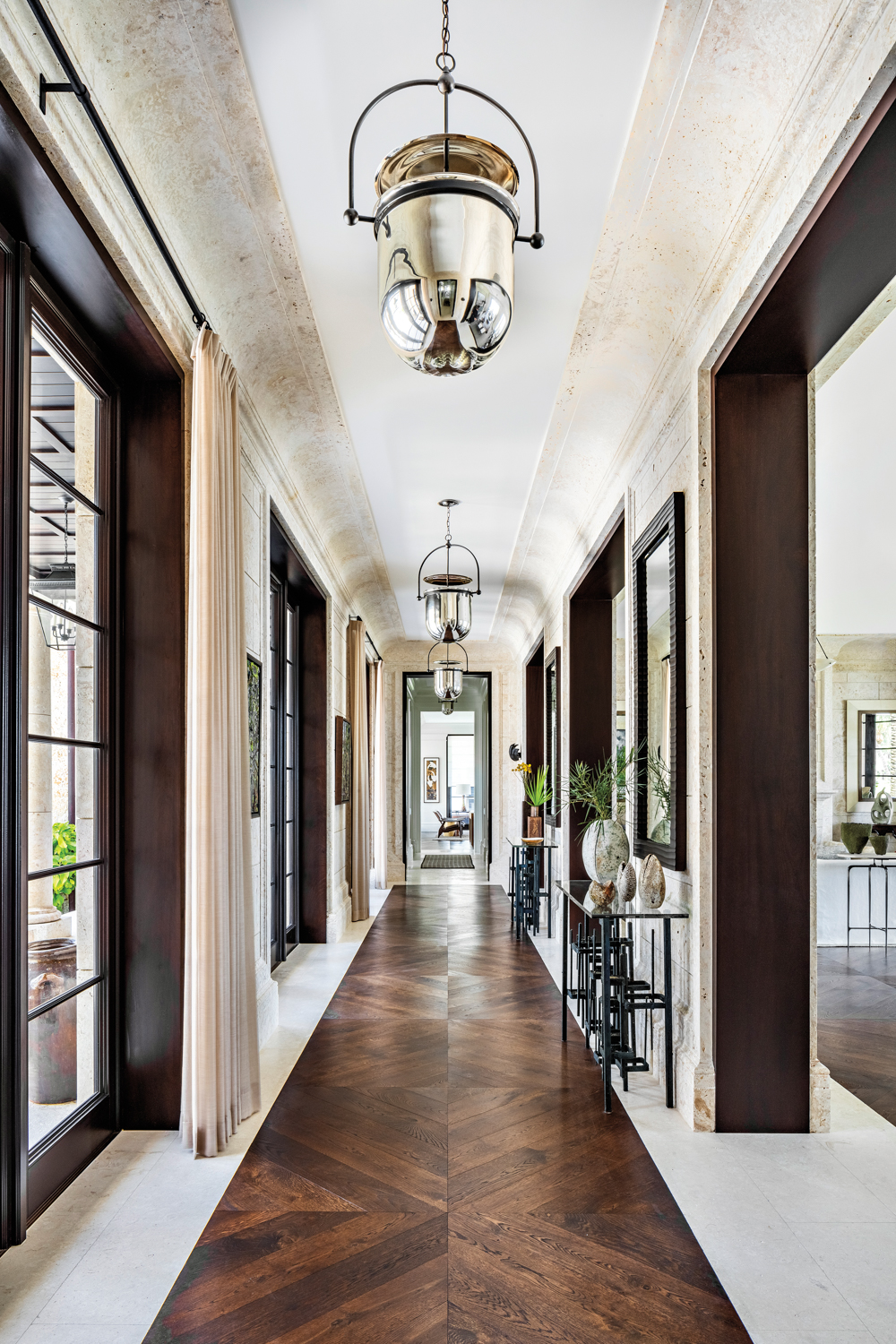 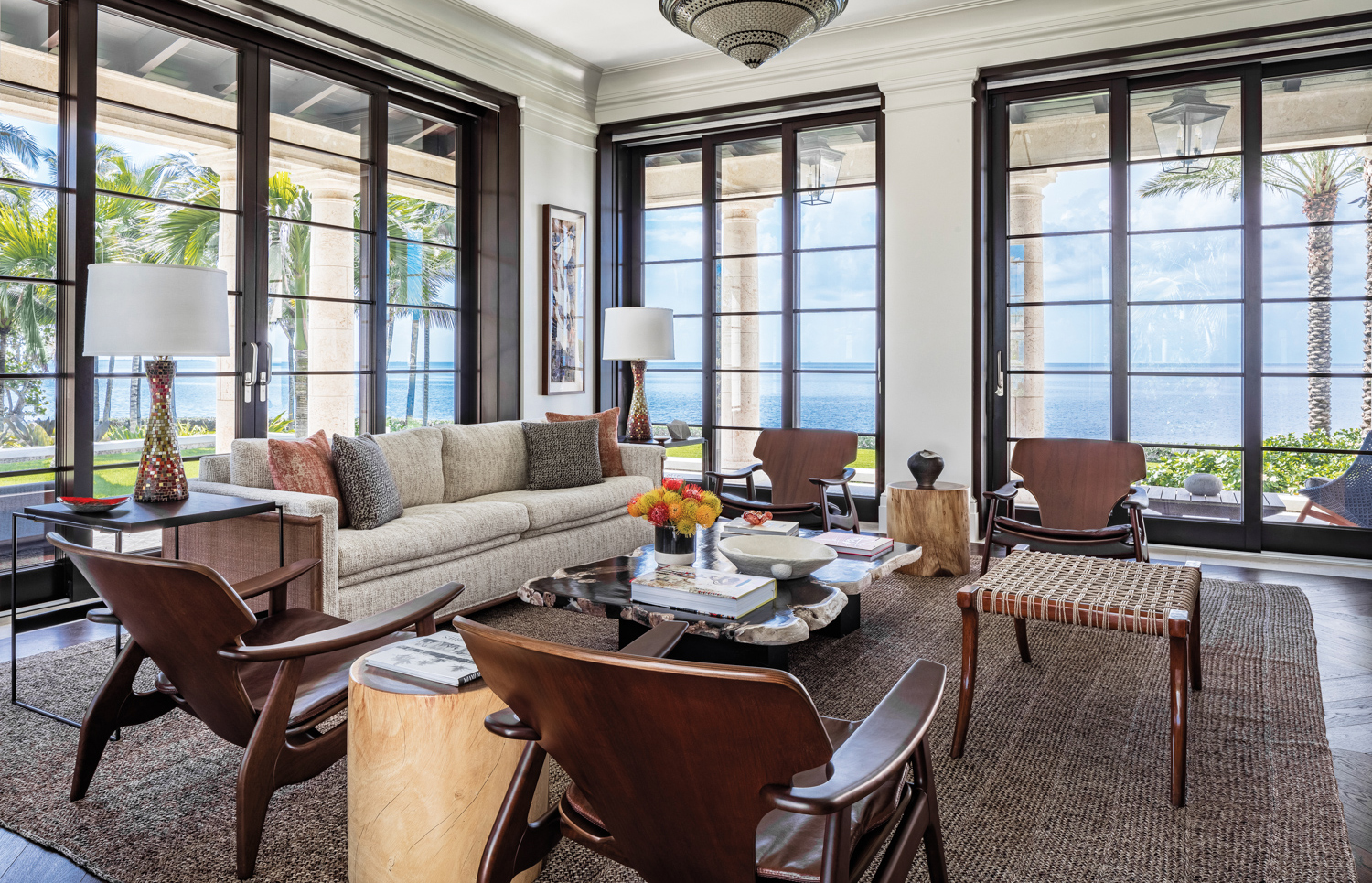 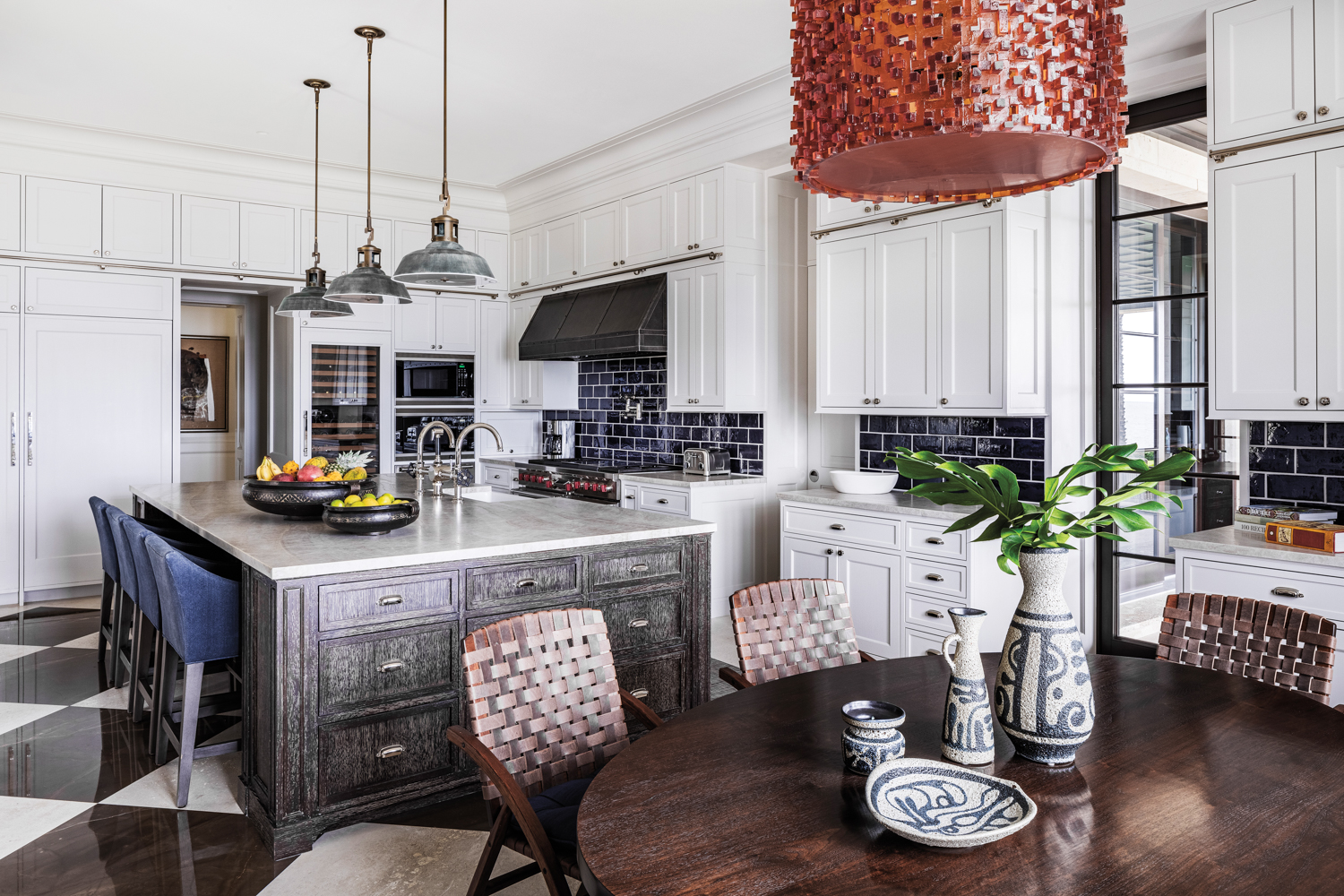 The Paris Ceramics backsplash and Lee Industries’ Campaign counter stools add a dose of blue to the kitchen. A trio of The Urban Electric Co. pendants center the Taj Mahal quartzite island, featuring a cerused oak base, while an Ironies chandelier suspends above Carlos Motta chairs encircling a Démiurge table. The Sub-Zero and Wolf appliances are from Ferguson Bath, Kitchen & Lighting Gallery.

The Paris Ceramics backsplash and Lee Industries’ Campaign counter stools add a dose of blue to the kitchen. A trio of The Urban Electric Co. pendants center the Taj Mahal quartzite island, featuring a cerused oak base, while an Ironies chandelier suspends above Carlos Motta chairs encircling a Démiurge table. The Sub-Zero and Wolf appliances are from Ferguson Bath, Kitchen & Lighting Gallery. 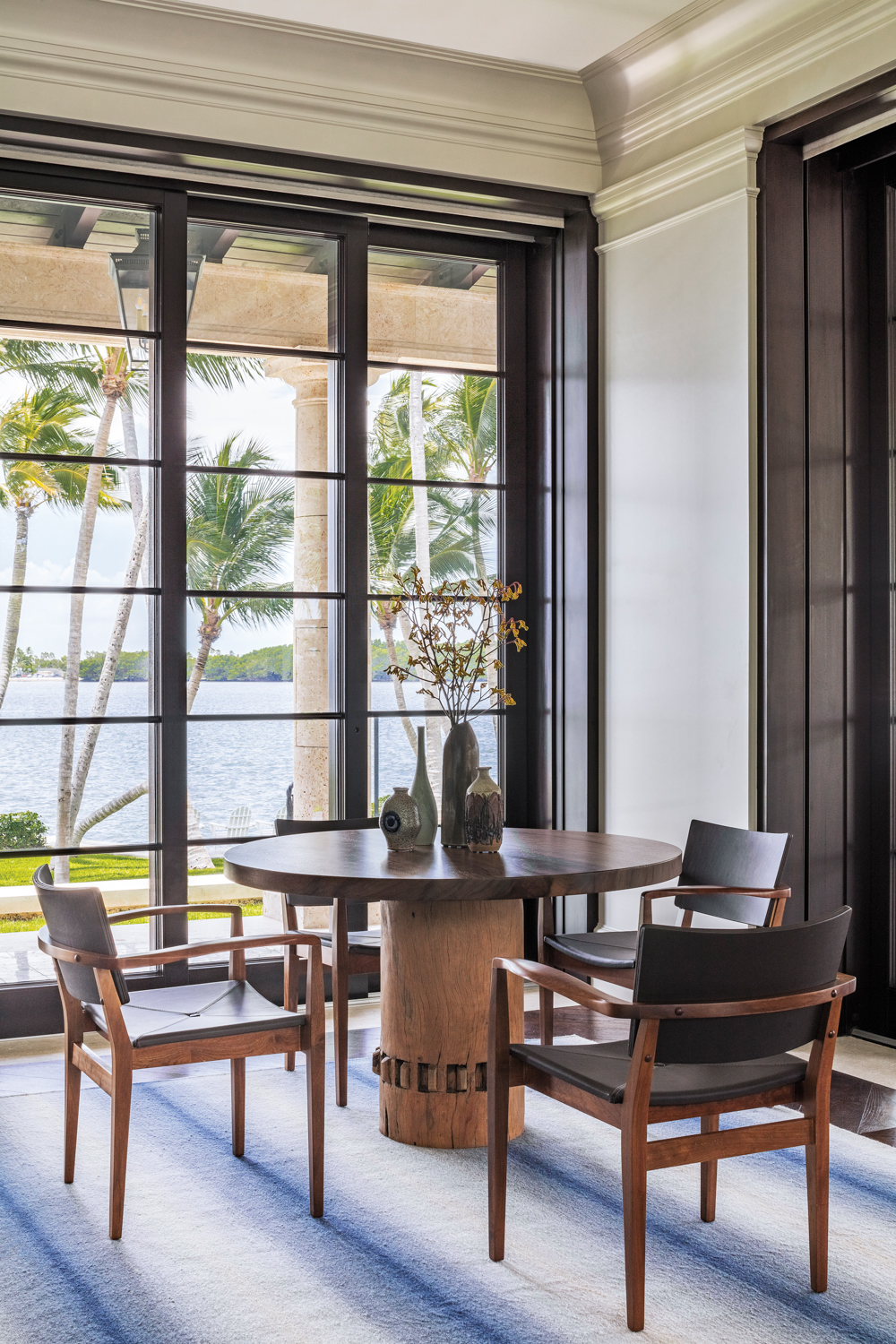 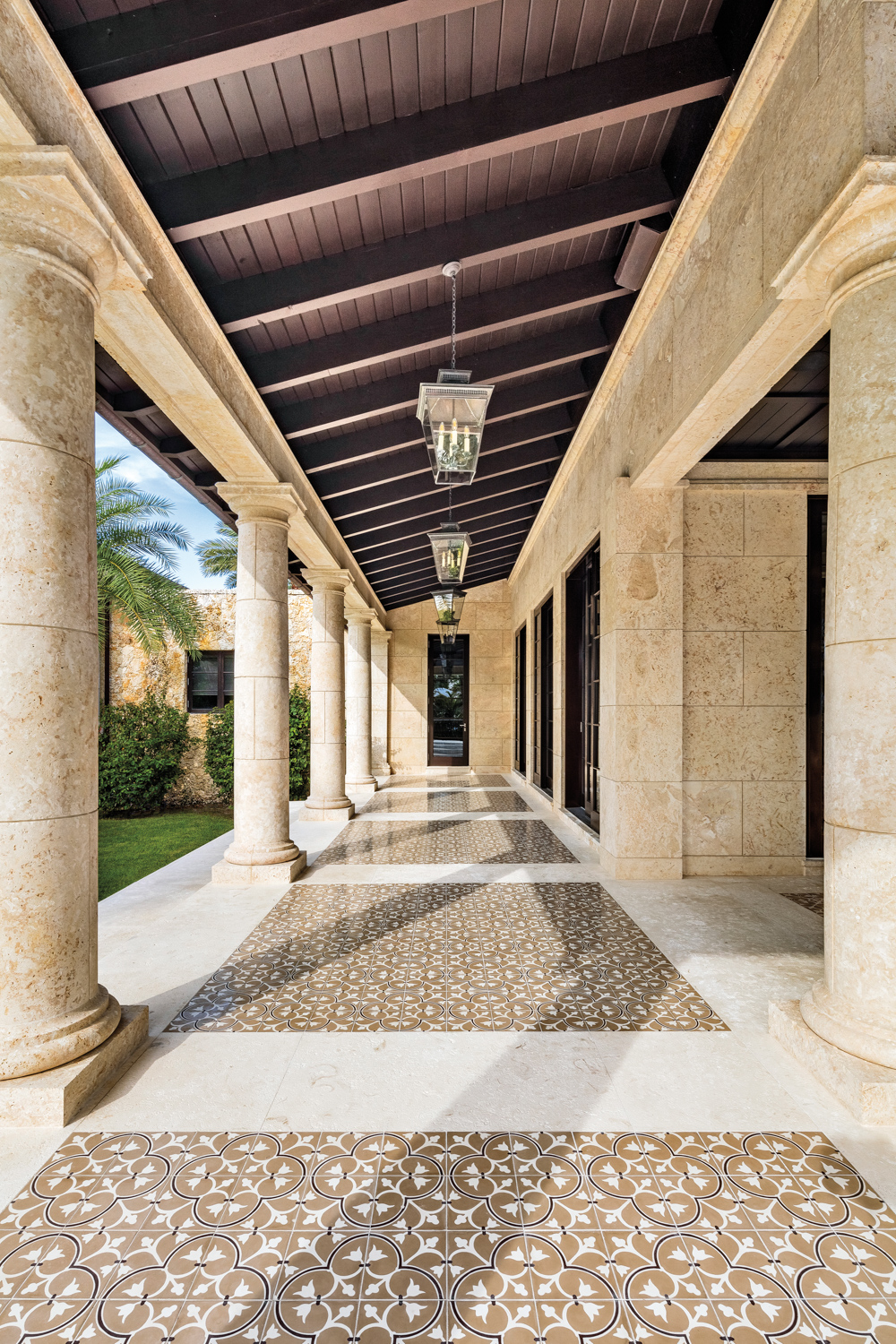 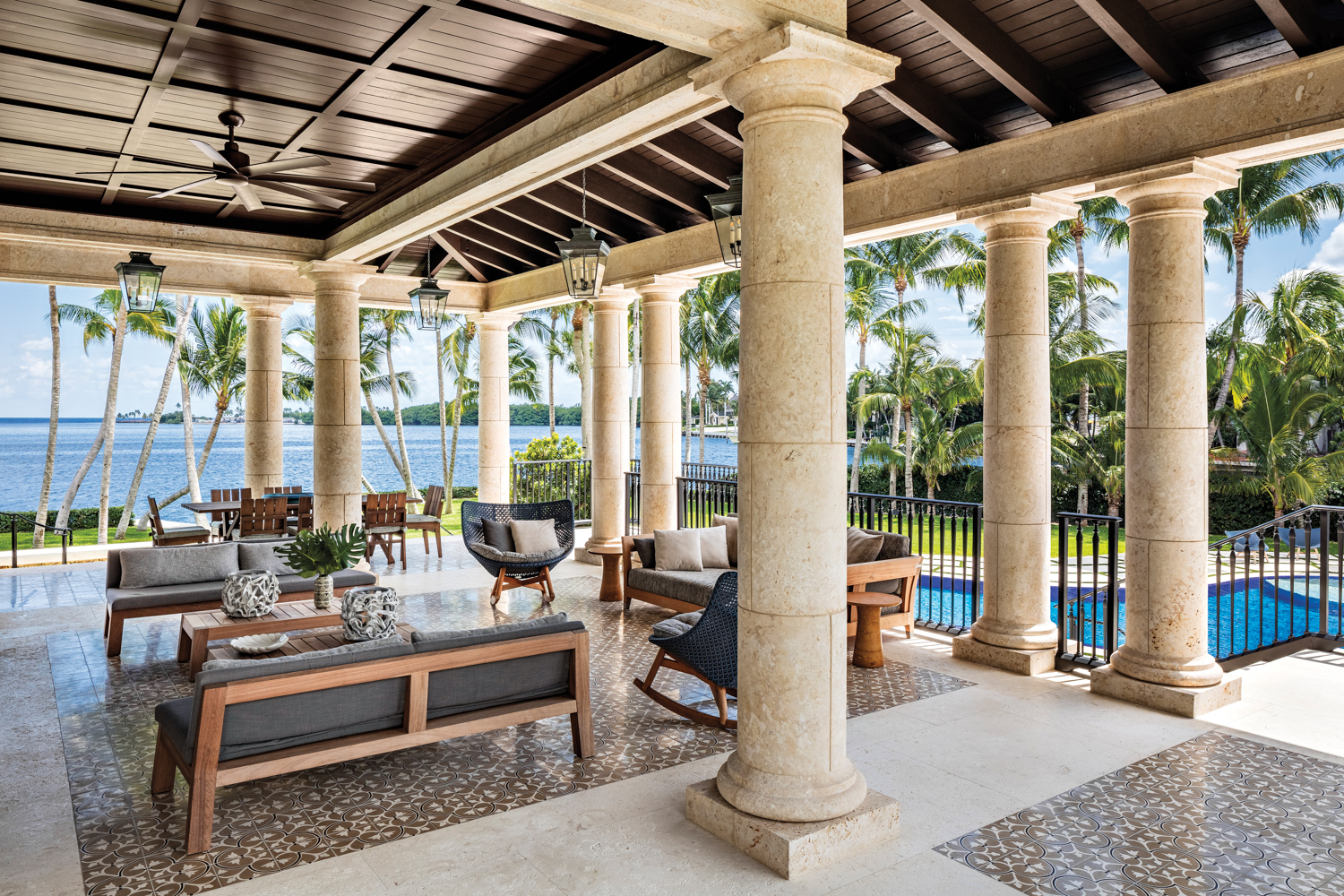 Indoor-outdoor living is a prevalent concept in South Florida, but it’s an obvious attraction when a house is bordered on three sides by water. Such was the case for a Coral Gables estate whose peninsula-like setting enticed an outdoors-loving family. “It is a very special property,” says the designer, Robert Rionda. “This is one of the coolest spots in Miami to watch storms come in and the weather change.”

It makes sense, then, that the project’s architect, Rafael Portuondo, was inspired by great houses of the Caribbean. “The Caribbean vernacular mostly has a feeling of indoor-outdoor,” he explains. “Homes in that style have panoramic views. They’re designed to be open and have cross-ventilation.” Portuondo planned this residence in likewise fashion, wrapping the structure in large covered terraces linked to nearly every room. Lined with Iroko wood ceilings, they offer protection from strong winds—meaning no matter the weather, there is always a spot to enjoy the environment comfortably.

Another nod to island living is the home’s striking display of organic materials. Grounded in oolite boulders hand-chiseled for an organic appearance, the base of the exterior “looks like it’s coming out of the ground,” Portuondo muses. The façade’s primary material, however, is Coralina, a coral stone used for centuries in places like Cuba and the Dominican Republic. Uniquely, its running bond pattern continues into the interior of the main public rooms, including the entry gallery and the great room, which contains the living, dining and sitting areas. This decision was partly a personal one, says builder JC Mendiola, who worked on the project with his father, general contractor Jose C. Mendiola Jr. “The clients had visited Casa de Campo in the Dominican Republic, where coral stone is often wrapped around houses into interiors,” he explains. The reason: The rock is moisture resistant and therefore ideal for spaces such as the great room, which nearly doubles in size when its terrace is accessible. “Because the clients like to entertain and keep the doors open, we chose coral stone rather than drywall to prevent condensation from forming,” Portuondo says. “We designed the house to be flexible when open.”

The structure’s graceful exterior columns and traditional crown molding add a classical touch to the tropical feel, yet the owners wanted the residence to be more comfortable than formal. Rionda introduced all new furnishings, although many offer a midcentury or an antique inspiration, such as the curvy-legged consoles flanking the fireplace in the great room’s sitting area. “The clients also really like organic design,” he adds. “We used a lot of Brazilian and wood pieces.” The oversize live-edge dining table, for instance, is made from one long walnut slab and large enough for two host chairs at each end. The furnishings’ wood palette, ranging from medium to dark hues, takes cues from the home’s oak flooring, which is stained in varying rich tones for contrast. “The furniture echoed that,” the designer says.

As for softer pieces, Rionda was inspired by the shifting colors of the sky and sea as daytime hours fade to nightfall. “I wanted to keep the main components of the furniture pretty neutral but work with some soft blues and greens for accents to integrate with the foliage outside and the changing water colors,” he says. He incorporated light-colored upholstery in casual materials such as textured linens, slubbed raw silk and jutes, including flat-weave rugs in the living and dining areas. “There is not a lot of variation in color,” he notes, “so we were working more with textures when using those neutrals.”

Those touches of sea tones show up in places such as the family room’s patterned rug and the primary bedroom’s dark blue headboard. But its most unexpected appearance is in the kitchen. When the initial idea for a neutral backsplash was unavailable, Rionda took an opposite turn toward deep blue handmade subway tiles. “I always like to integrate one or two accent colors in the house,” he says. “This was a way of bringing blue into the kitchen as well but going much deeper into a navy.” Linen counter stools in a similar shade further establish the hue’s presence.

Inside and outside, the residence is a true balancing act, Portuondo says. “This is a good mix of historical architecture and contemporary edge with the furnishings,” he reflects. And just like the home’s coral stone backdrop, the architect adds, “it’s elegant and casual at the same time.” 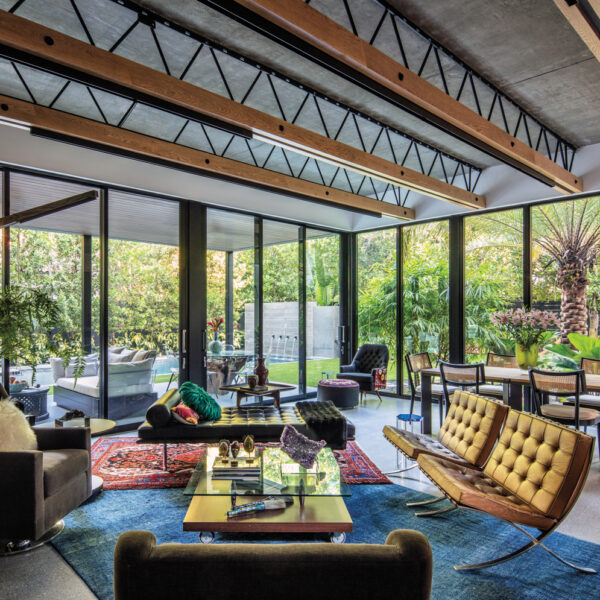 Inside The Tranquil Miami Oasis Made For Inspired Living 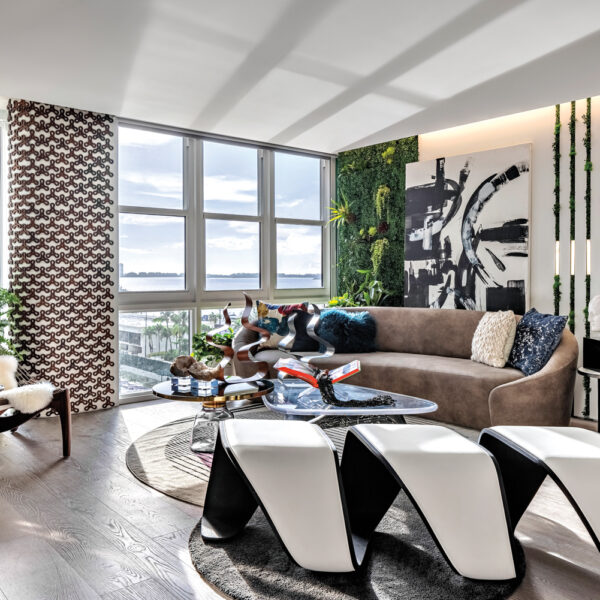 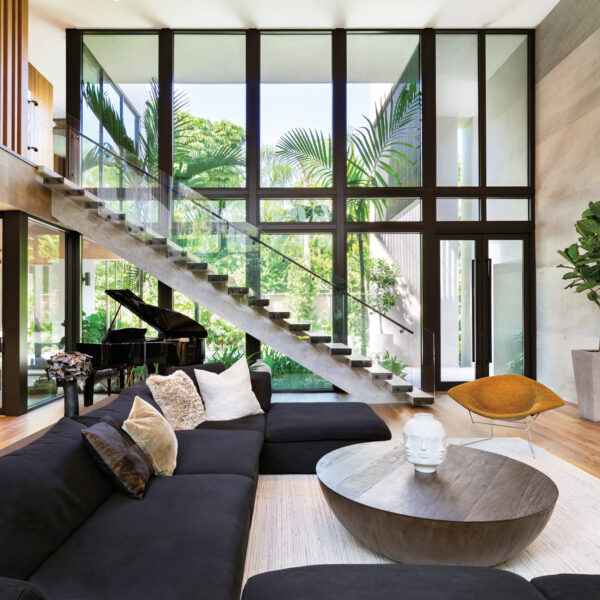 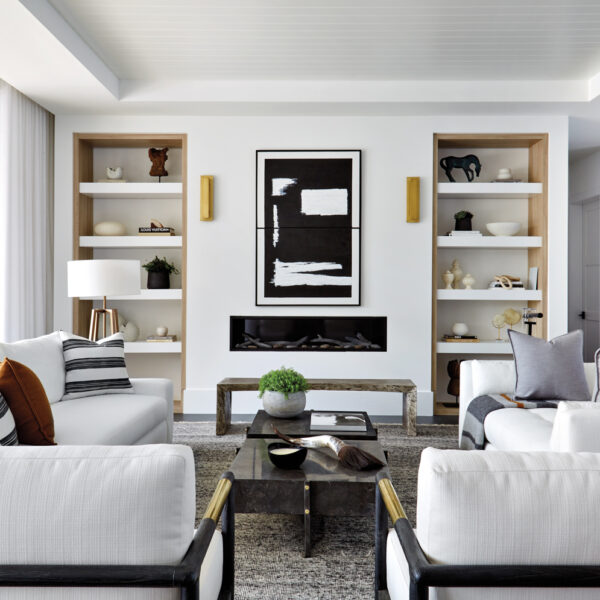 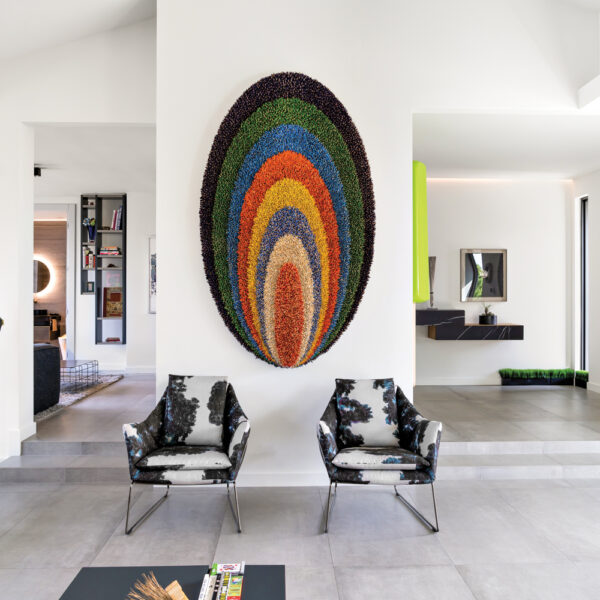