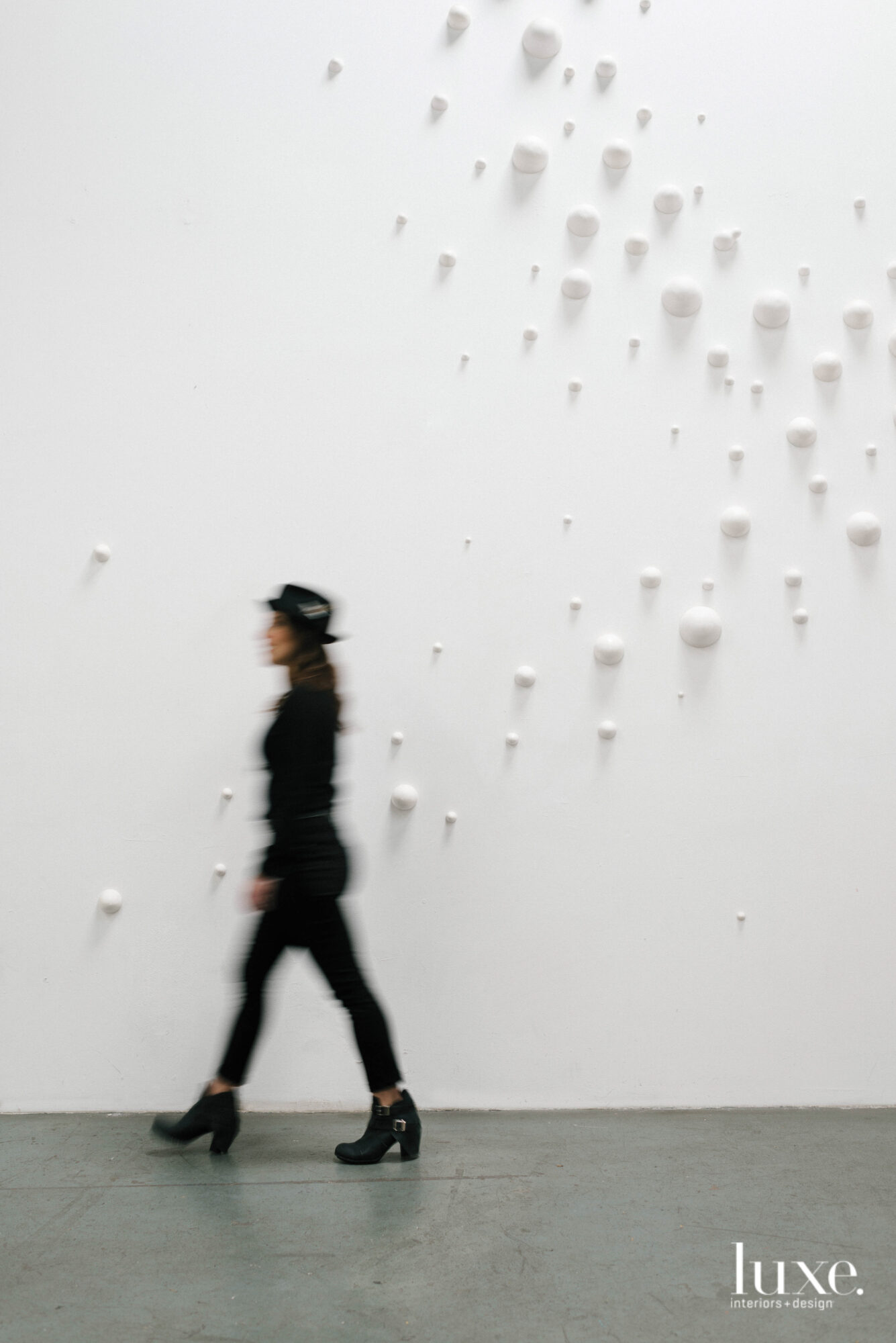 In the hands of Venice, California-based artist Elizabeth N. Orleans, ceramic, the same material used to make a humble coffee mug or a vase for fresh-picked flowers, can also profoundly transform a physical environment. One of Orleans’ early forays, known as “Internal View,” occurred in 2005 with a site-specific installation for the Museum of Contemporary Art at the Luther Burbank Center of the Arts in Santa Rosa. There, she applied thousands of her white convex ceramic forms to the gallery walls and ceiling to otherworldly effect. “The audience could walk through them; they could touch them. It was an immersive experience,” says the artist. 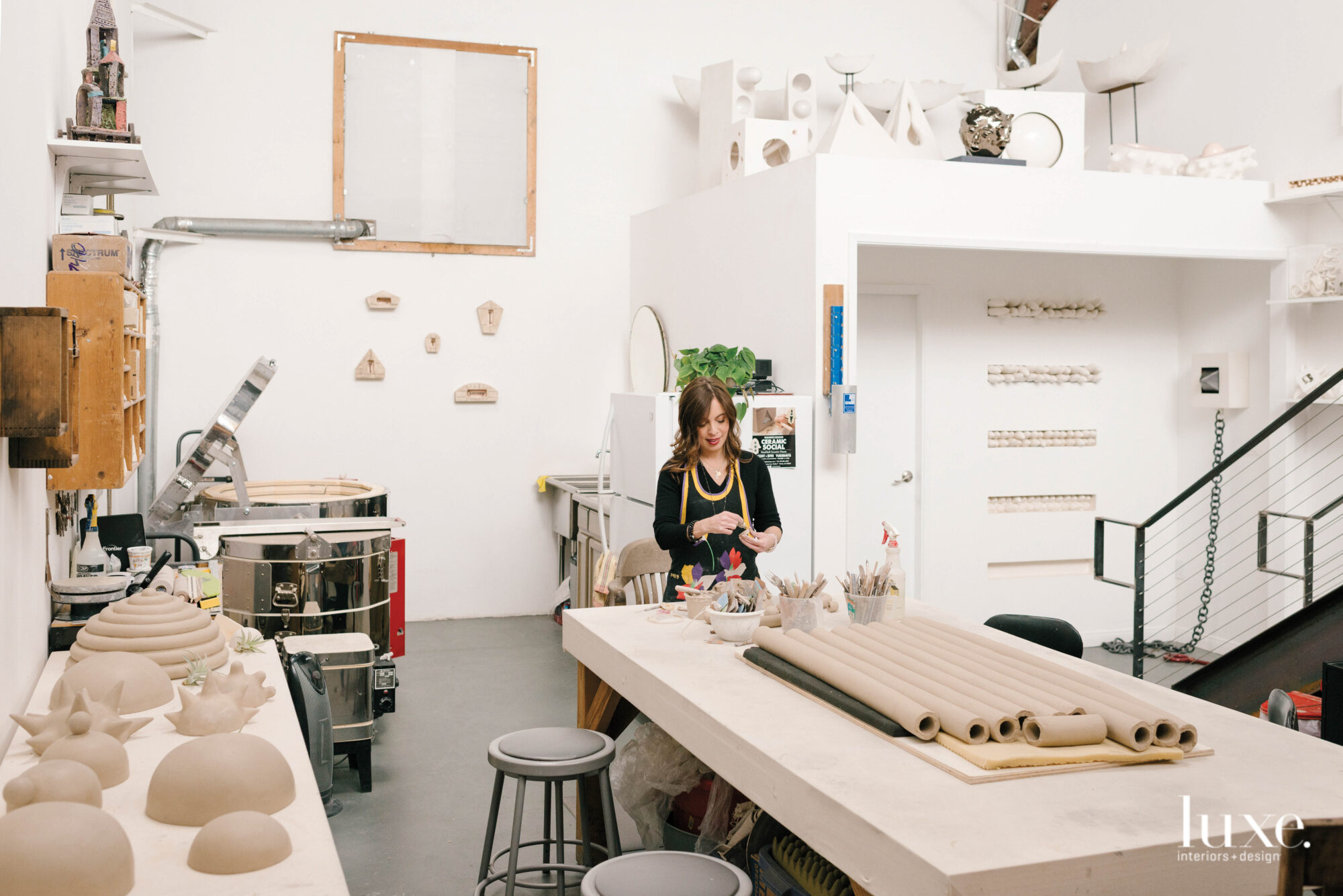 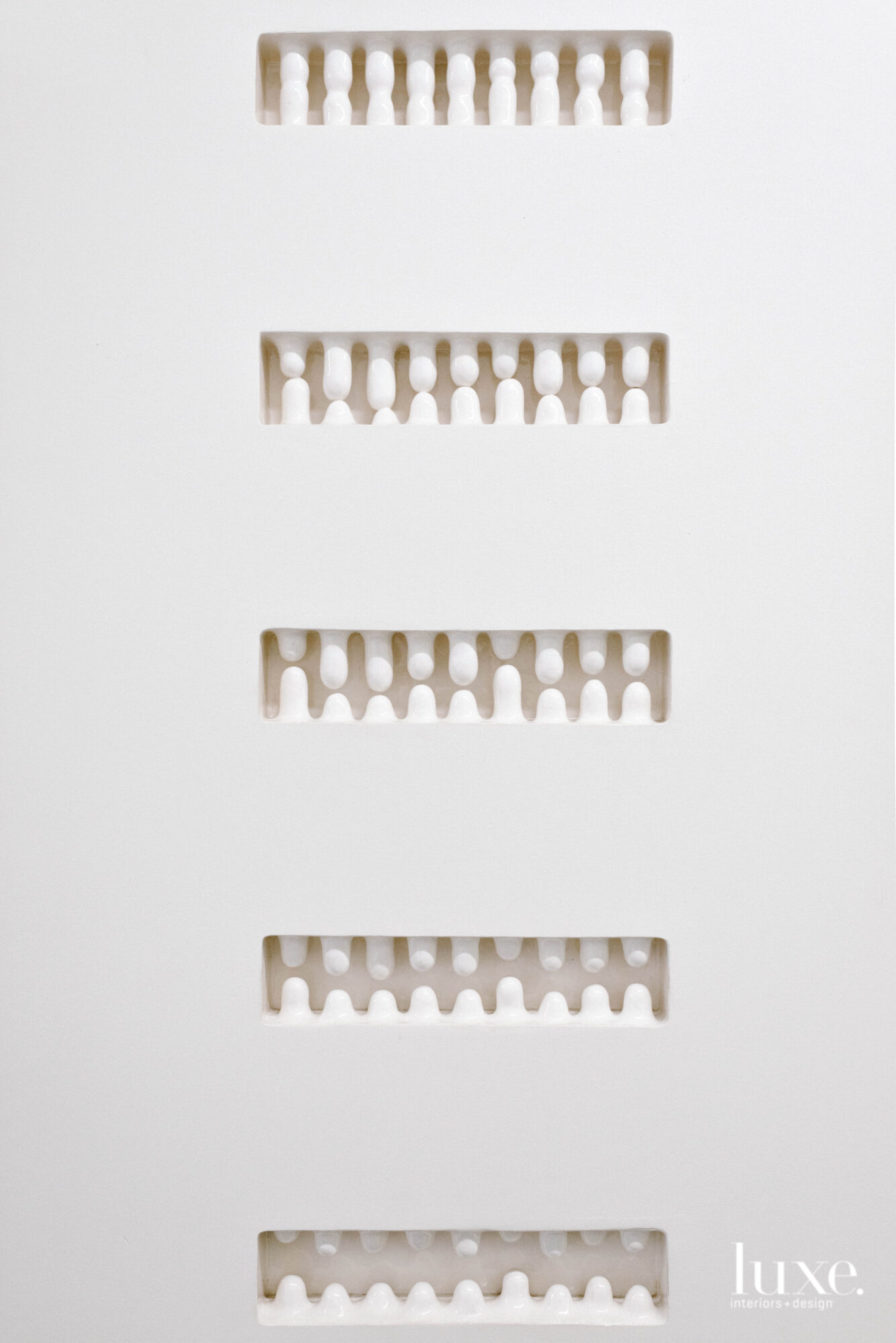 Inset within a wall in her studio are ceramic pieces. Orleans views the interstitial spaces within walls as fair game.

Inset within a wall in her studio are ceramic pieces. Orleans views the interstitial spaces within walls as fair game. 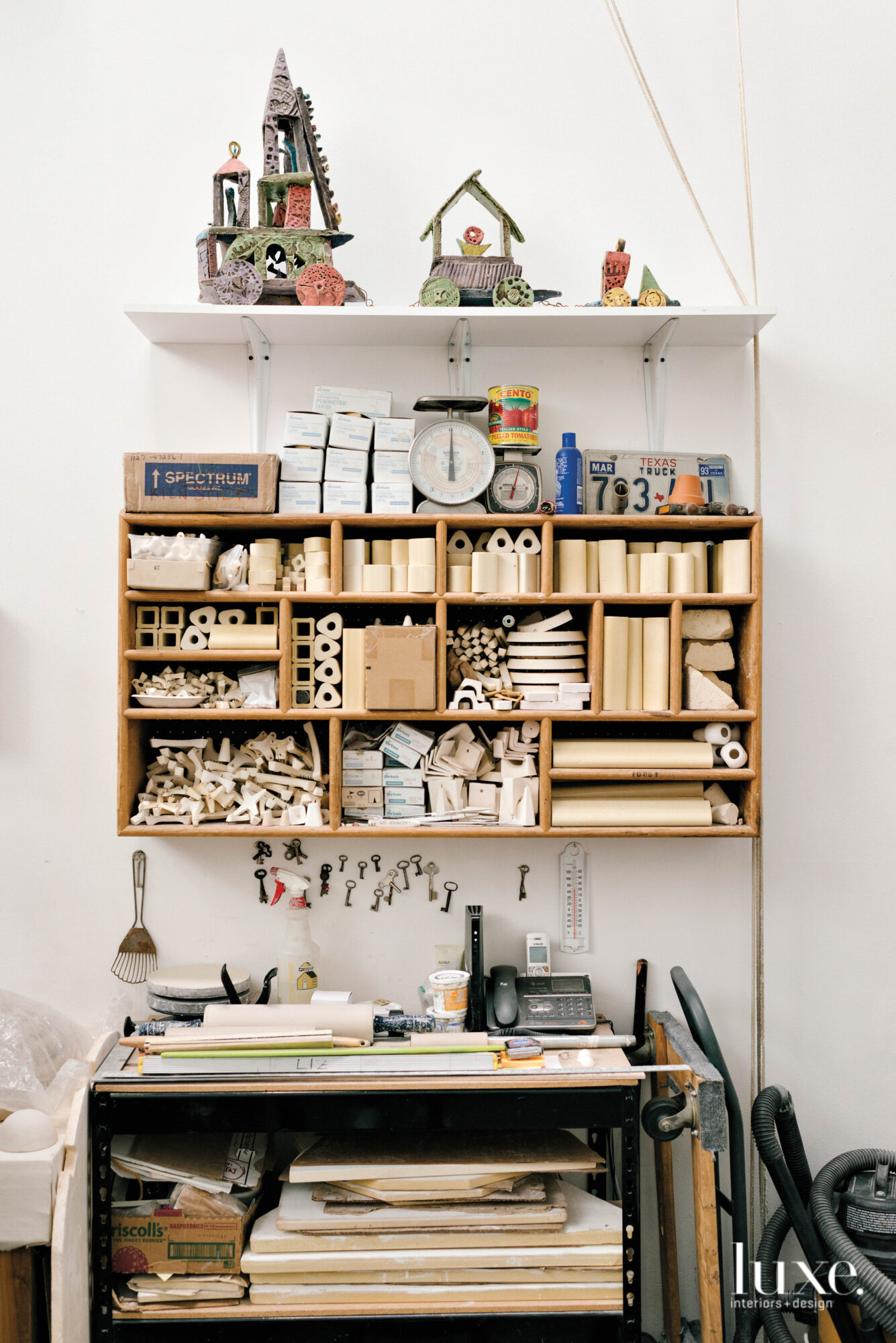 A corner of the studio is filled with the raw materials required as well as unfinished forms.

A corner of the studio is filled with the raw materials required as well as unfinished forms. 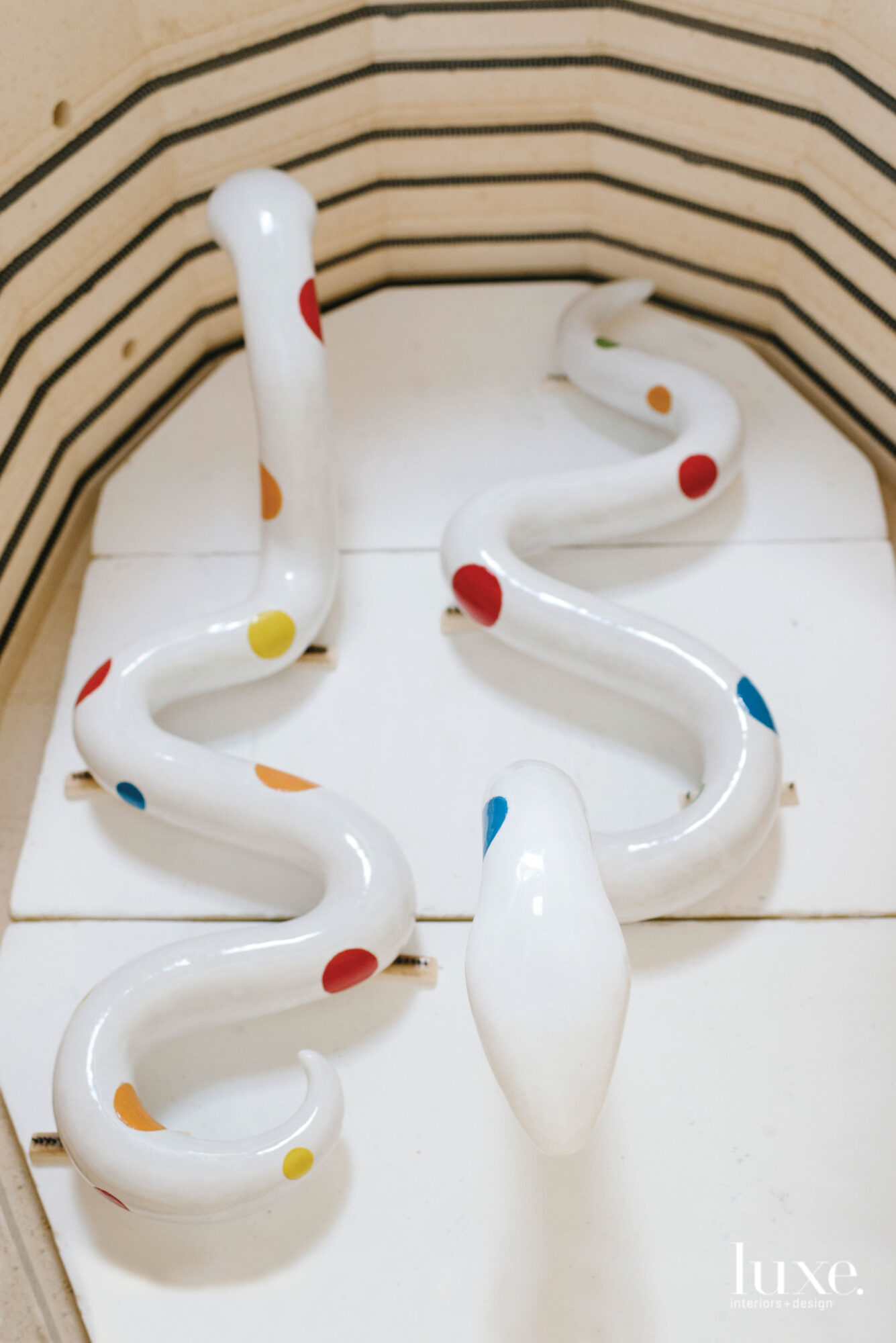 With the encouragement of Ed Moses, the revered West Coast postwar artist, who visited her in the early days at her studio—a former Coca-Cola warehouse where she moved in 2008—she started thinking even bigger. “I was making smaller objects, and he told me to stop wasting my time,” she recalls. “He saw that I had greater potential.” That led to her “Inner Space” series. In that, she took the convex shapes that were protruding from the wall and made them concave (with other shapes to follow). “I realized I could use the space inside of a wall to create an effect like the work is potentially growing within it.”

Her ambitious scale is not the only thing that sets Orleans apart from other artists exploring the same medium—it’s also how she reimagines seemingly quotidian forms. “I’m using a traditional material in a traditional manner, in that I’m firing and glazing it,” she explains, “but I’ll take it out of its typical context.” Her ladders are a case in point. She takes a practical tool and negates its functional purpose. “A lot of my work is about breaking down those barriers of ceramics being utilitarian and bending the mind of the viewer,” she says.

While Orleans tends to focus on a larger format (“I have dreams of making staircases and floors,” she says), the artist operates on other scales, too. “When you give someone something small, they can hold it in their hand; it’s almost something to meditate with,” she says. “A small object can have great importance to an individual.” And those acquainted with Orleans’ abstract, white work may be surprised by some recent pieces, which incorporate bright colors. Again, the artist is playing with expectations: “I am consciously taking things that most people are afraid of like a snake, and putting colorful polka dots on it. It’s still this powerful force,” she says, “yet it changes the way people perceive it.” 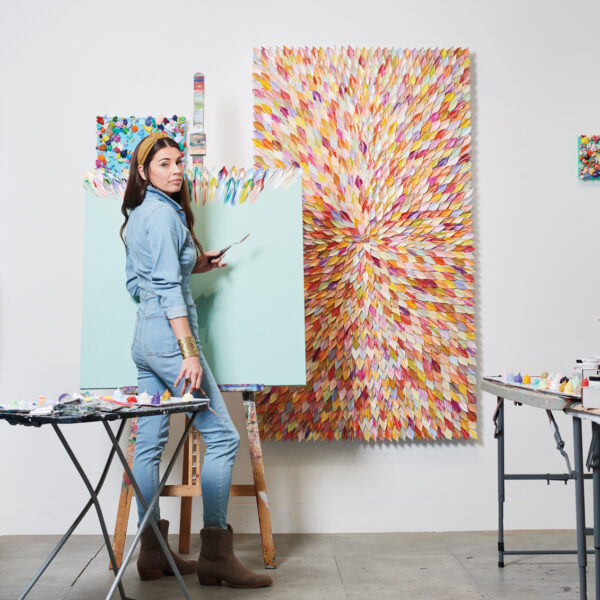