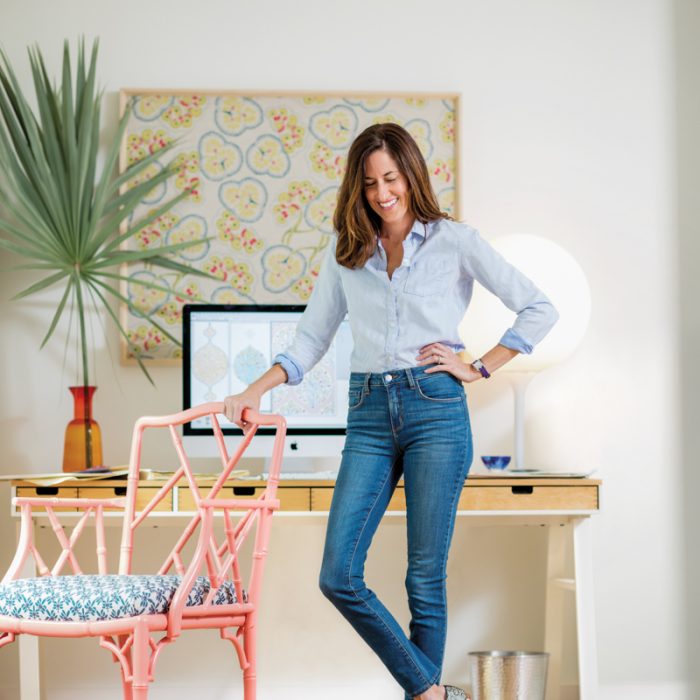 A textile designer reimagines global inspirations for her prismatic prints.

For textile designer Charlotte Osterman, the world is a palette of vivid hues and animated patterns. Her eye (and camera) constantly searches for these moments of wonder, zooming in on the cut-out artworks of Henri Matisse, the Moorish mosaics of Portuguese courtyards, and the tropical fauna of her home in Southwest Florida. These foraged shapes find a modern edge in her fabric line, a kaleidoscopic mix of bold geometrics and romantic florals. “My work is a graphic take on traditional elements,” explains the designer.

Such passion for patterns feels natural for Osterman, who sharpened her skills as the prints director at Diane von Furstenberg for seven years in New York, developing the brand’s iconic fabric designs. But she always knew she would strike out on her own. “I wanted something with my name on it,” recalls Osterman, who slowly built an archive of motifs for her dream future collection. 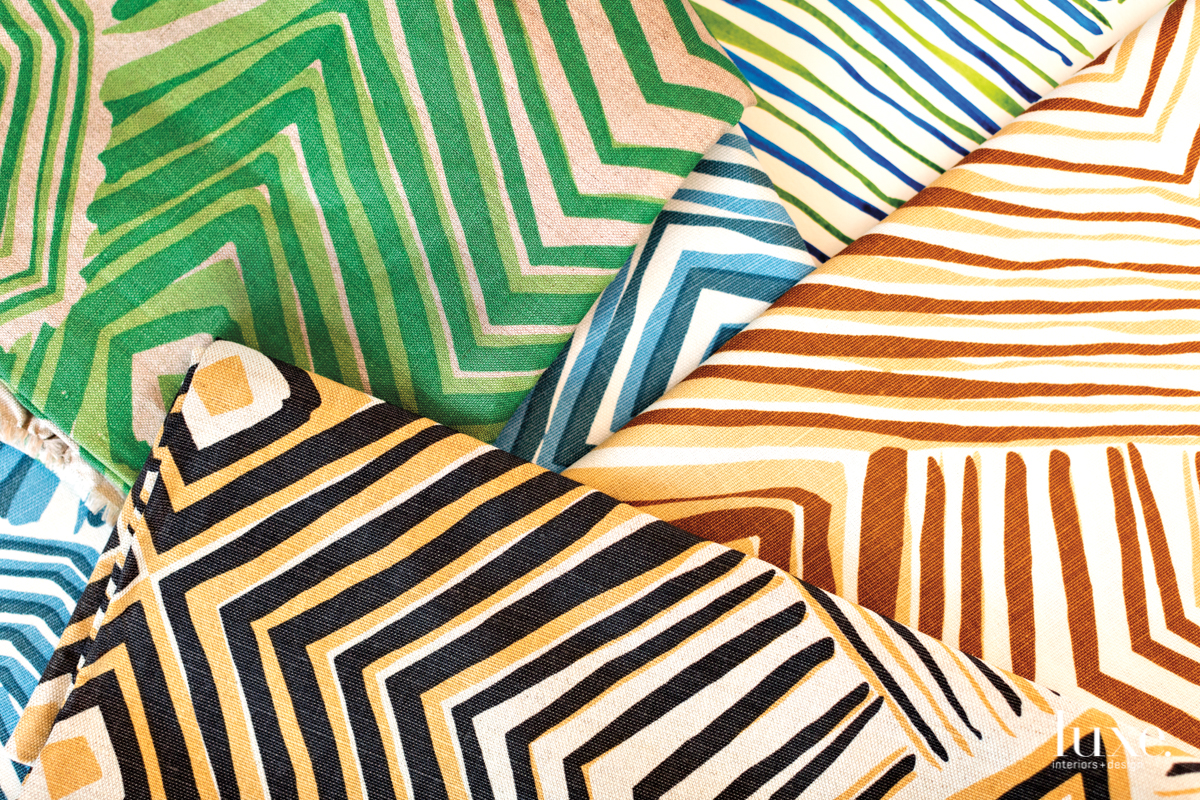 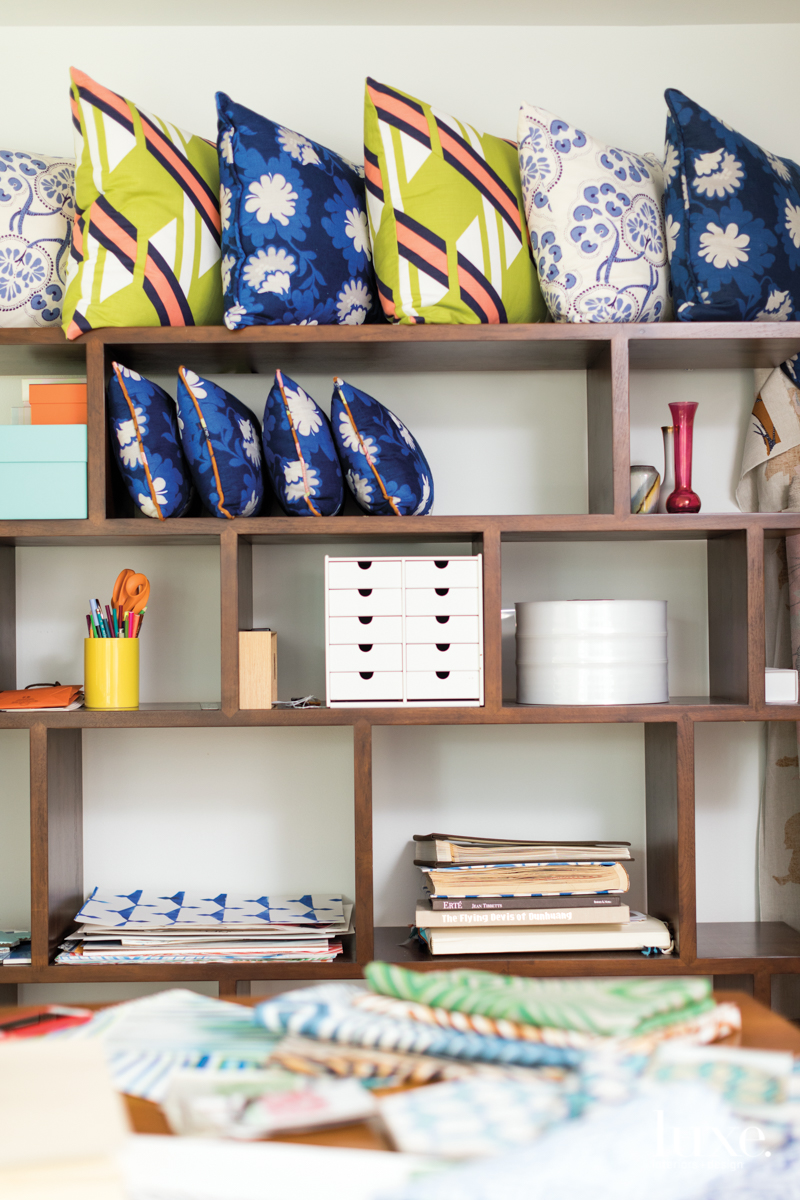 A bookshelf in textile designer Charlotte Osterman's studio showcases pillows covered in her Flower Child, Palampore Vine and Ribbon designs as well as inspirational items including photo albums from her travels and sketch books.

A bookshelf in textile designer Charlotte Osterman's studio showcases pillows covered in her Flower Child, Palampore Vine and Ribbon designs as well as inspirational items including photo albums from her travels and sketch books. 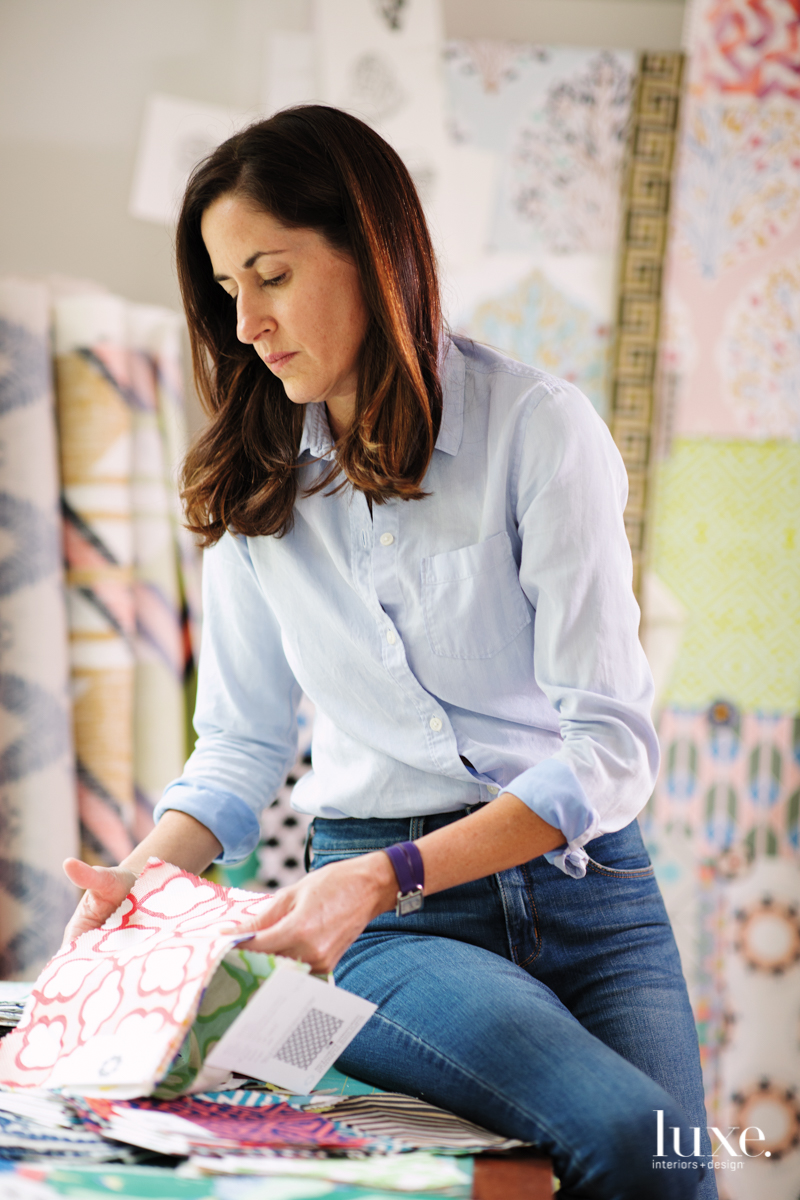 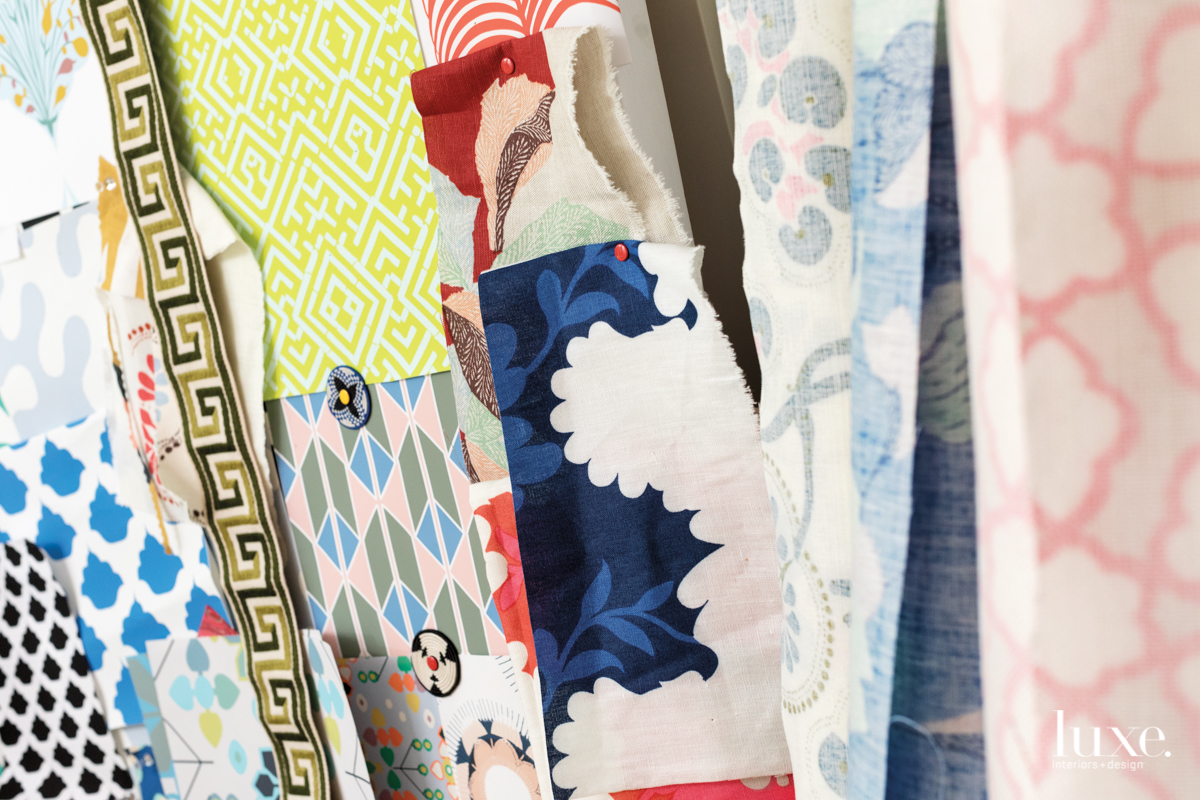 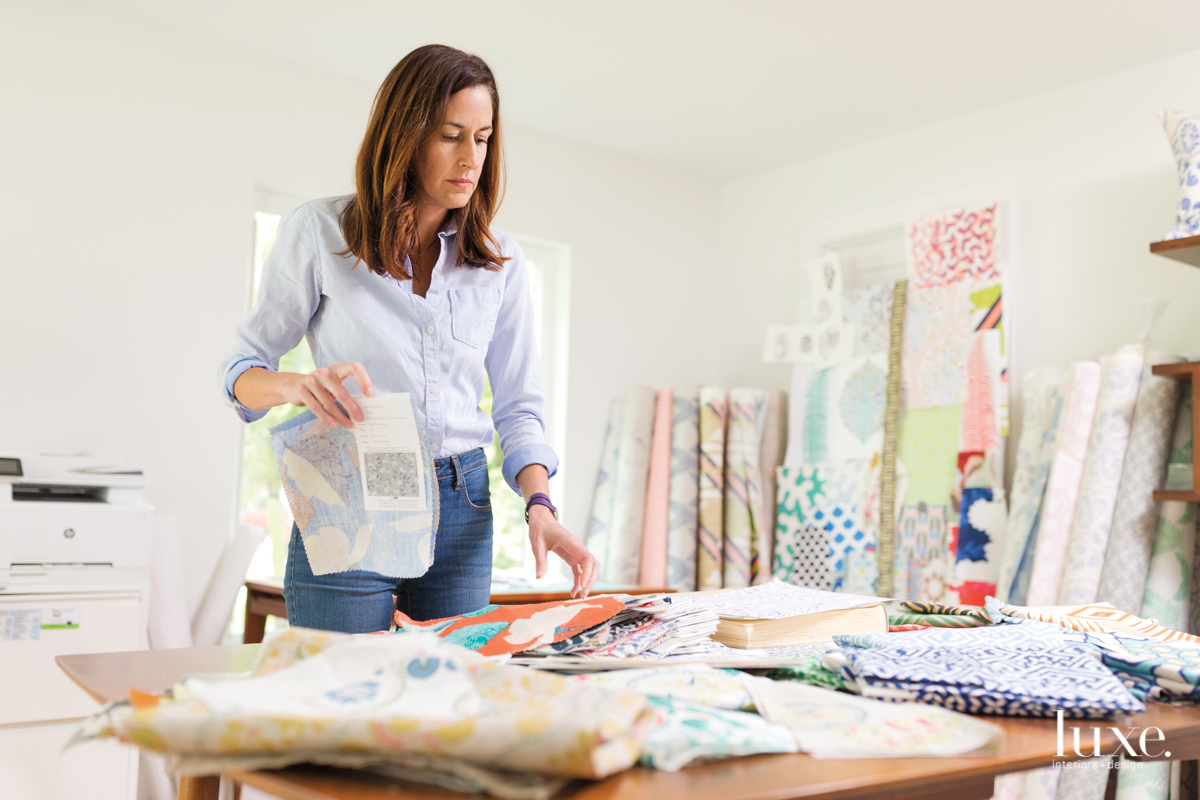 sterman sorts through fabric swatches in her studio.

sterman sorts through fabric swatches in her studio. 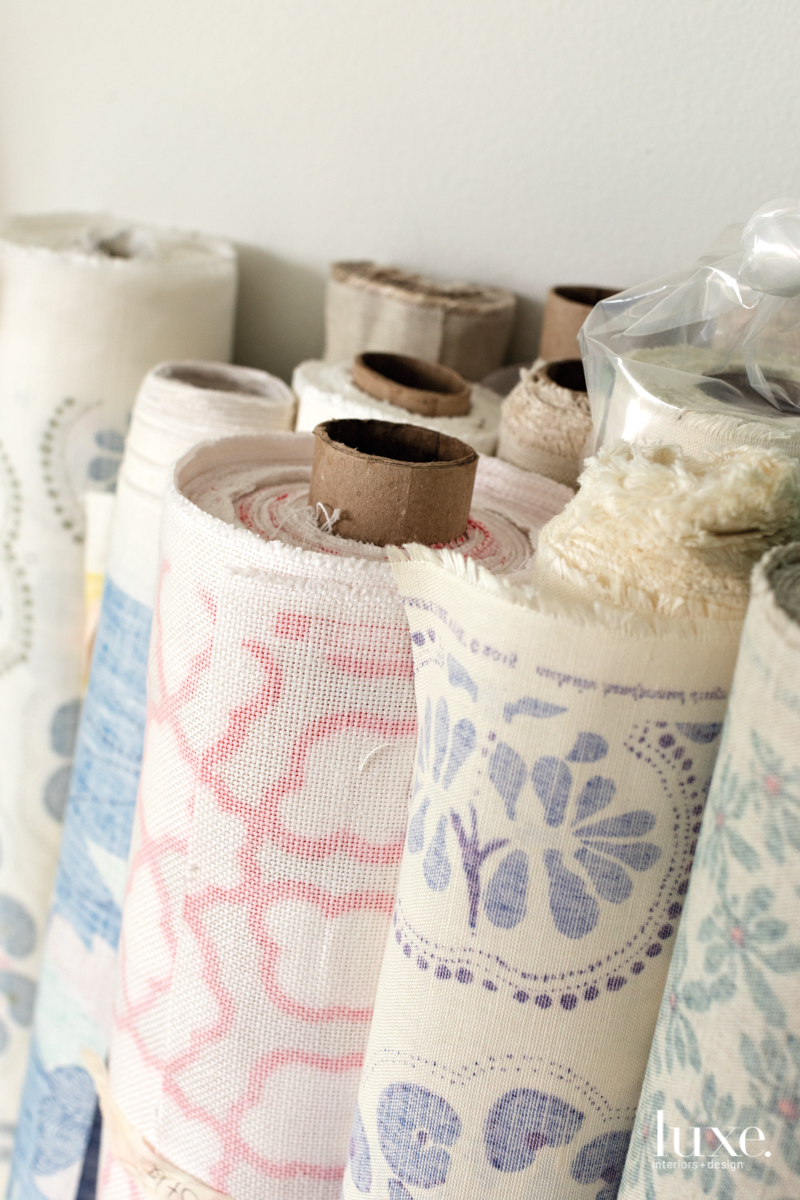 A Textile Designer Taps Into Global Inspiration For Her Prints

A Textile Designer Taps Into Global Inspiration For Her Prints 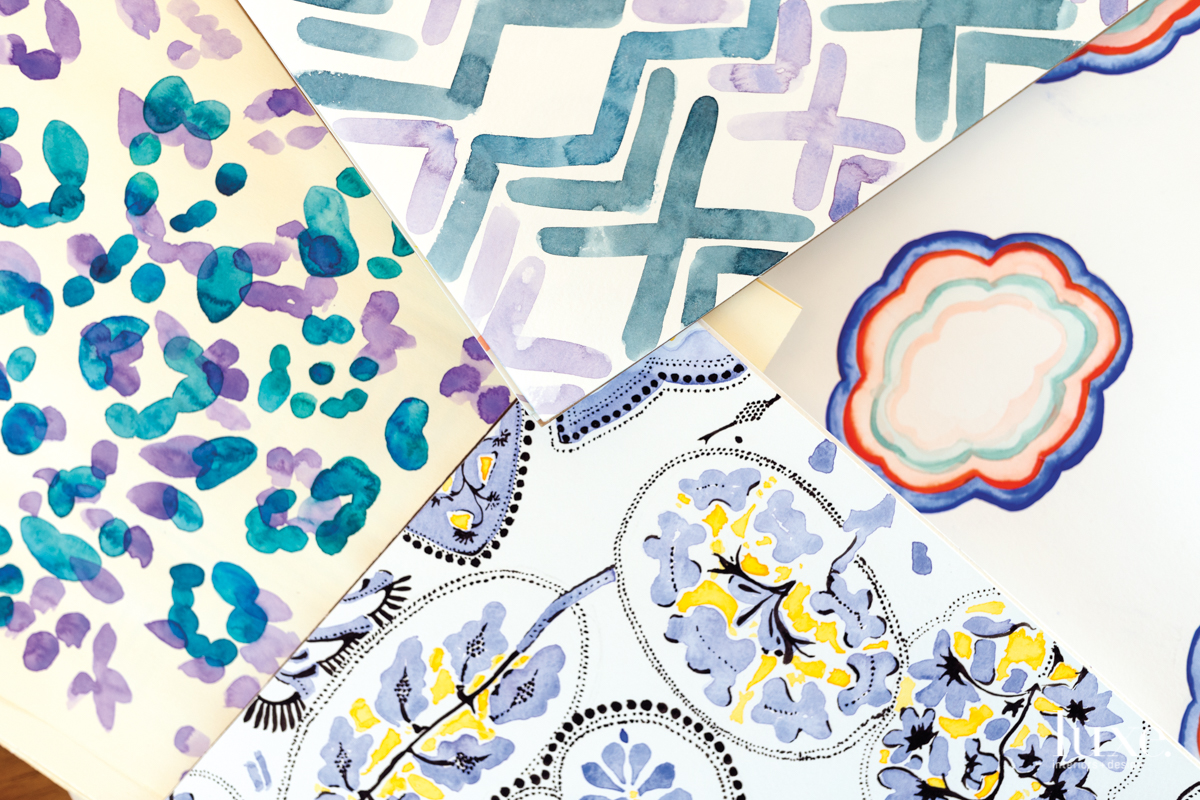 The yellow, blue and black pattern resulted in her Palampore Vine textile. A tile she saw while traveling in Portugal inspired her Azulejo print, which is displayed in various colorways.

The yellow, blue and black pattern resulted in her Palampore Vine textile. A tile she saw while traveling in Portugal inspired her Azulejo print, which is displayed in various colorways.

The designer gravitated early on to patterns from warmer climes, collecting vintage Bali batiks and photographing Turkish tiles along her travels. So when her family decided to move a little more than three years ago, she knew immediately the Sunshine State would be the perfect place to launch her fabric line. “I feel like the light and the color in Florida is different from anywhere else,” says Osterman. “It helps me see real color, versus the city gray of New York.”

Plenty of light floods her studio, where inspiration often begins among bulletin boards filled with her paintings, travel snapshots and fabric swatches. When creating a design from her collection of historical motifs, she likes to extract and simplify particular shapes from an ornate pattern, like her Plantain Trellis design, which she pulled from an antique rug. Strolls through the nearby Marie Selby Botanical Gardens provoke endless silhouettes for some of her more free-form floral designs. Often Osterman likes to sketch or paint these potential forms first, before manipulating them further in Photoshop. “I like retaining that handmade feel,” says Osterman. “That way the design is uneven, and nothing is quite perfect. If I start on the computer, things look too stiff.”

For her colors, the designer contrasts cool and warm hues, and tempers her more vivid shades with neutral grounds, like tobacco with lime and coral pink. These colors are reproduced faithfully by a family-owned textile print mill operating in Rhode Island since 1937. There, each layer of her design is hand-screen printed onto Belgian flax linen or cotton linen made in the United States, applying eco-friendly ink dyes. Osterman likes using the bleached linen for a sharp finish, and an ecru-hued natural version to enhance the print’s texture.

Both subtle and bold, graphic and handmade, her prints play well among diverse styles, making Osterman a favorite among interior designers. Her fabrics are showcased at Pansy Bayou in Sarasota and Fritz Porter in Charleston, South Carolina. These textiles also feel right at home at the Cocoon House on Siesta Key, a landmark midcentury modern home designed by architect Paul Rudolph. Osterman worked with designer Ellen Hanson to restore the interior for the Sarasota Mod tour series, hosted by the Sarasota Architectural Foundation. Hanson installed iconic pieces from the era, covered and accented in Osterman’s patterns. “I love that contrast of minimal with maximal,” says Osterman of the project. “A lot of color and pattern works really well with the minimal backdrop of midcentury modern homes, almost like a clean canvas.”

This perhaps marks the most thrilling part of the process for Osterman–seeing these prints become part of the world again in a refreshed, contemporary way. “I’m continually fascinated by how people end up using my prints,” says the textile designer. “I may have an idea of using it one way, and then they do something totally amazing that I never would have thought of. It’s always a surprise.”