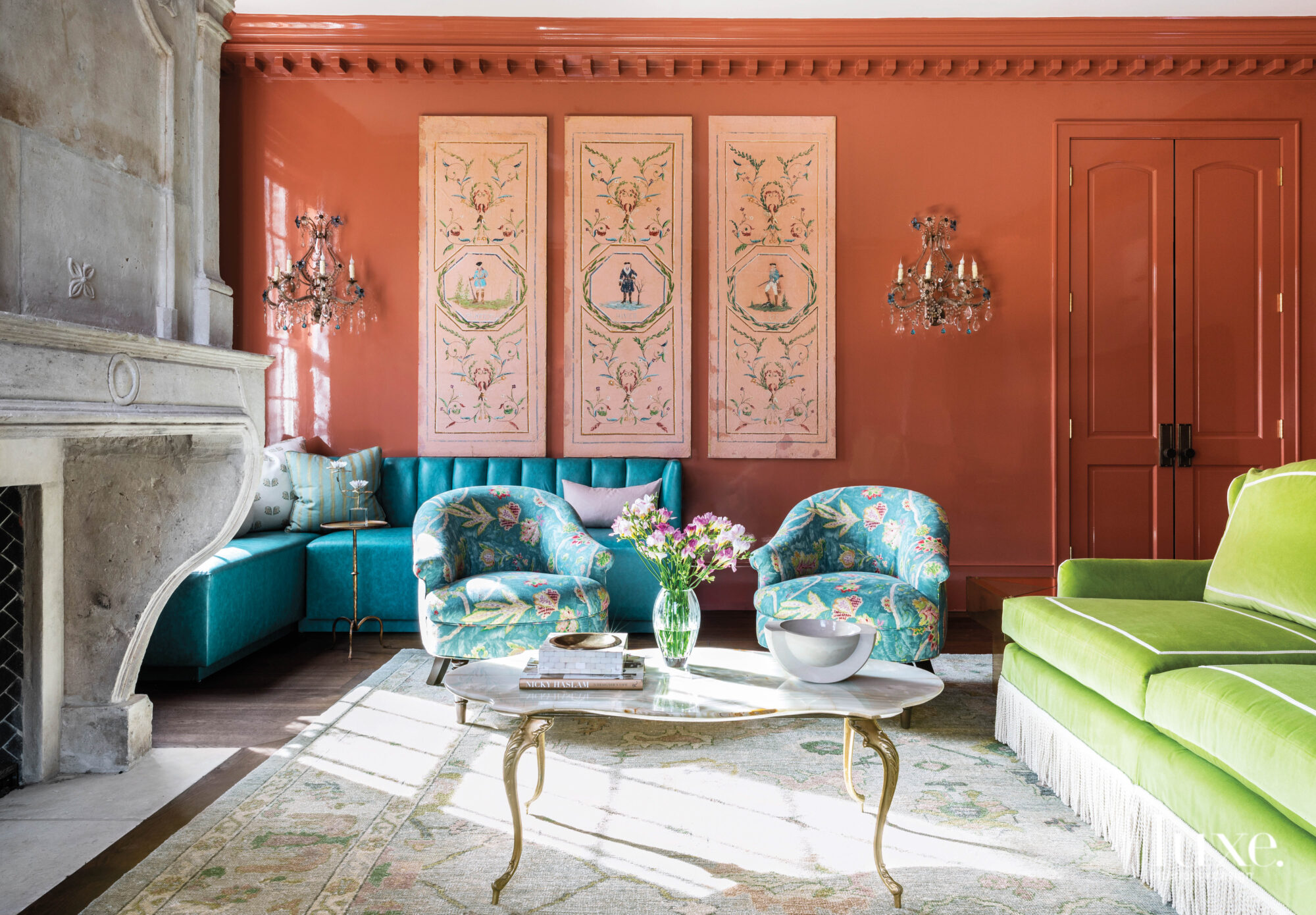 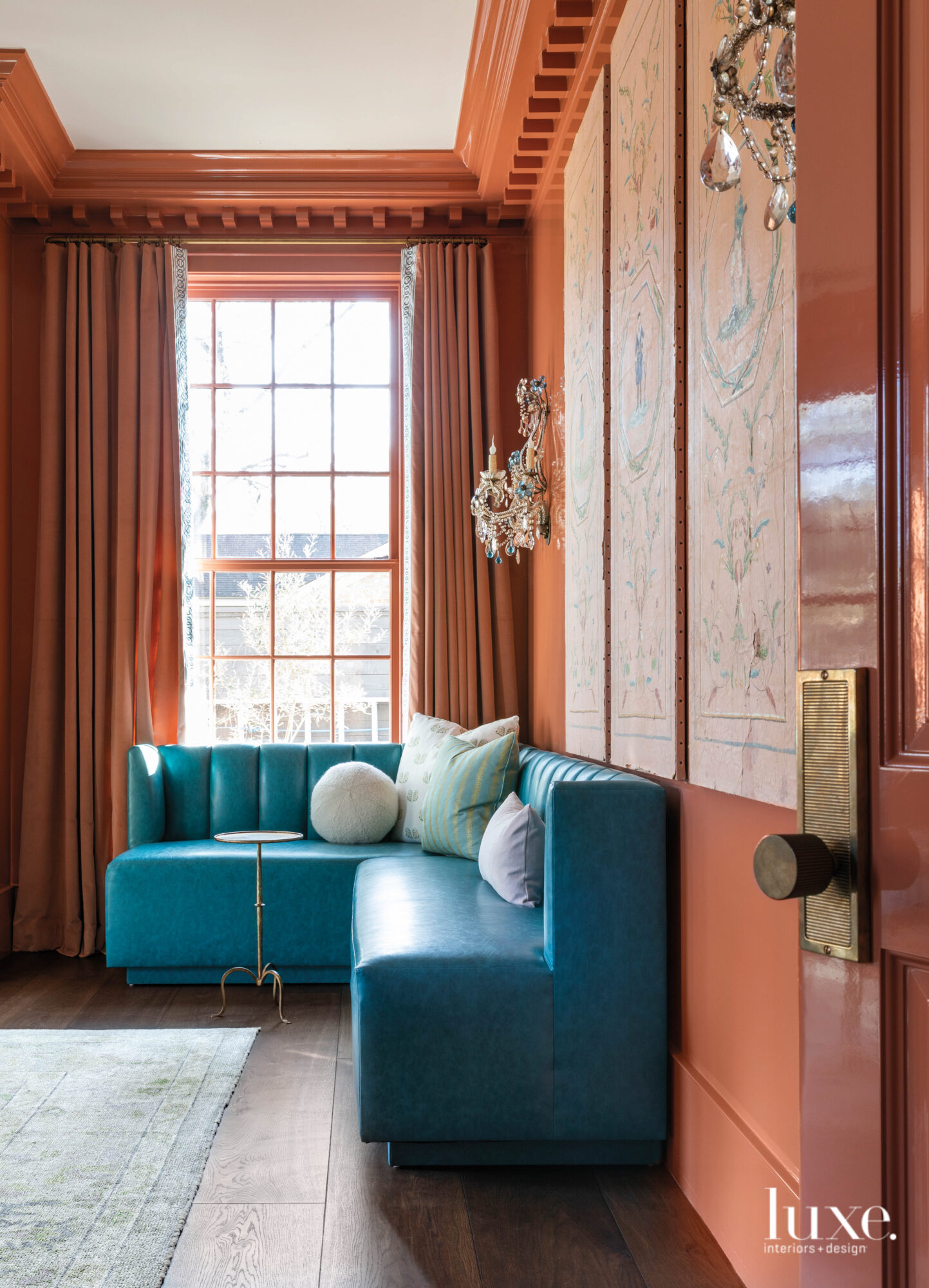 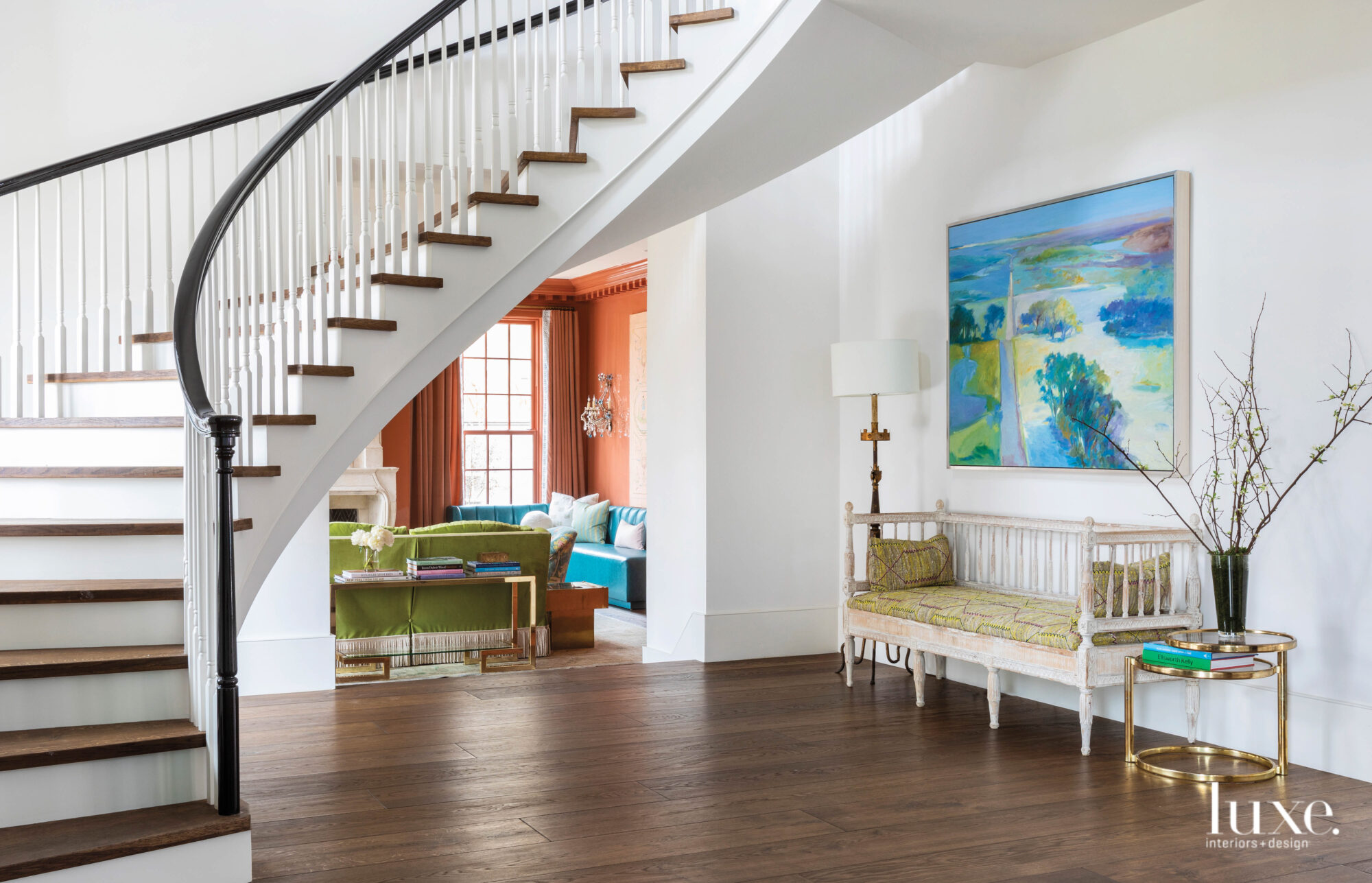 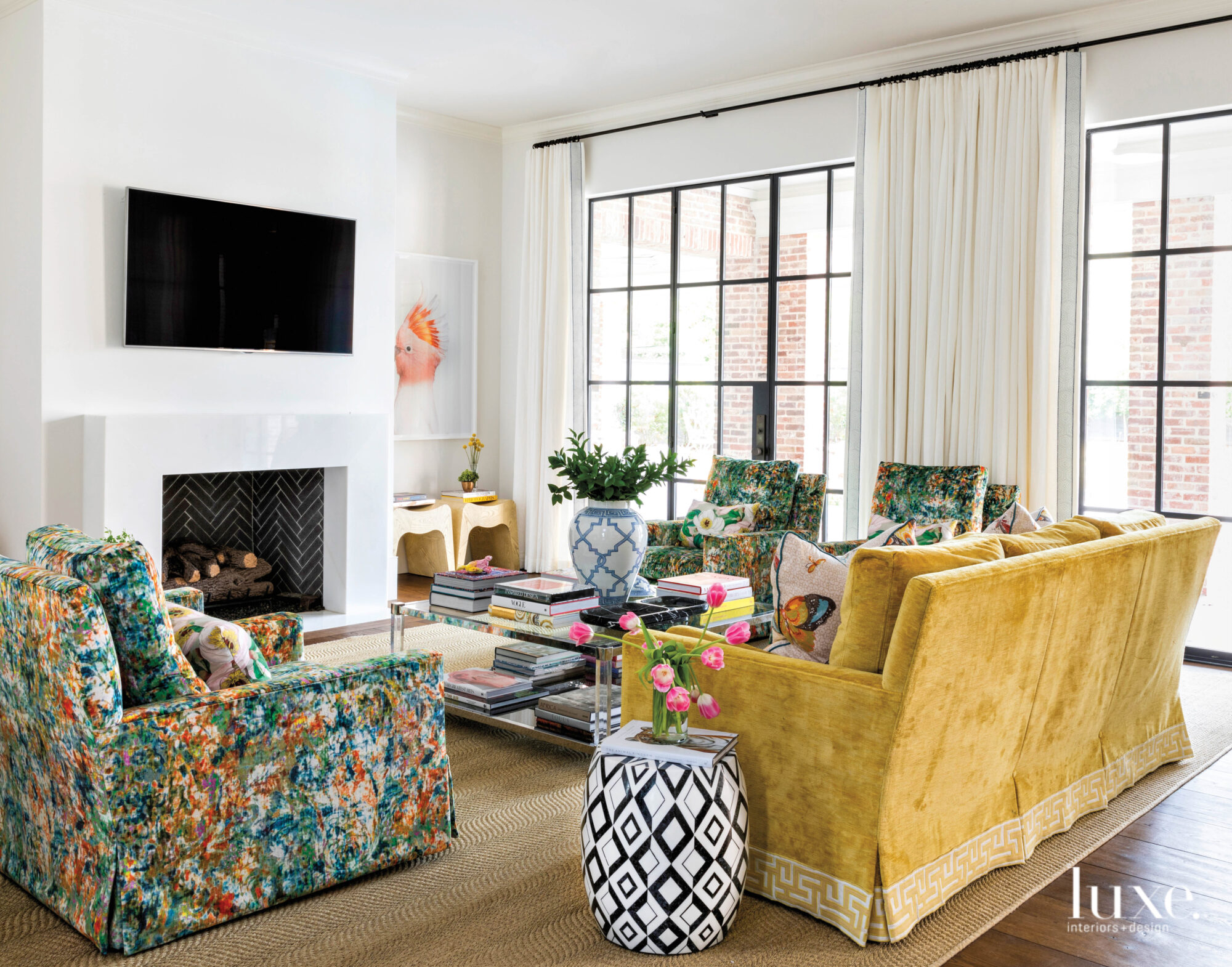 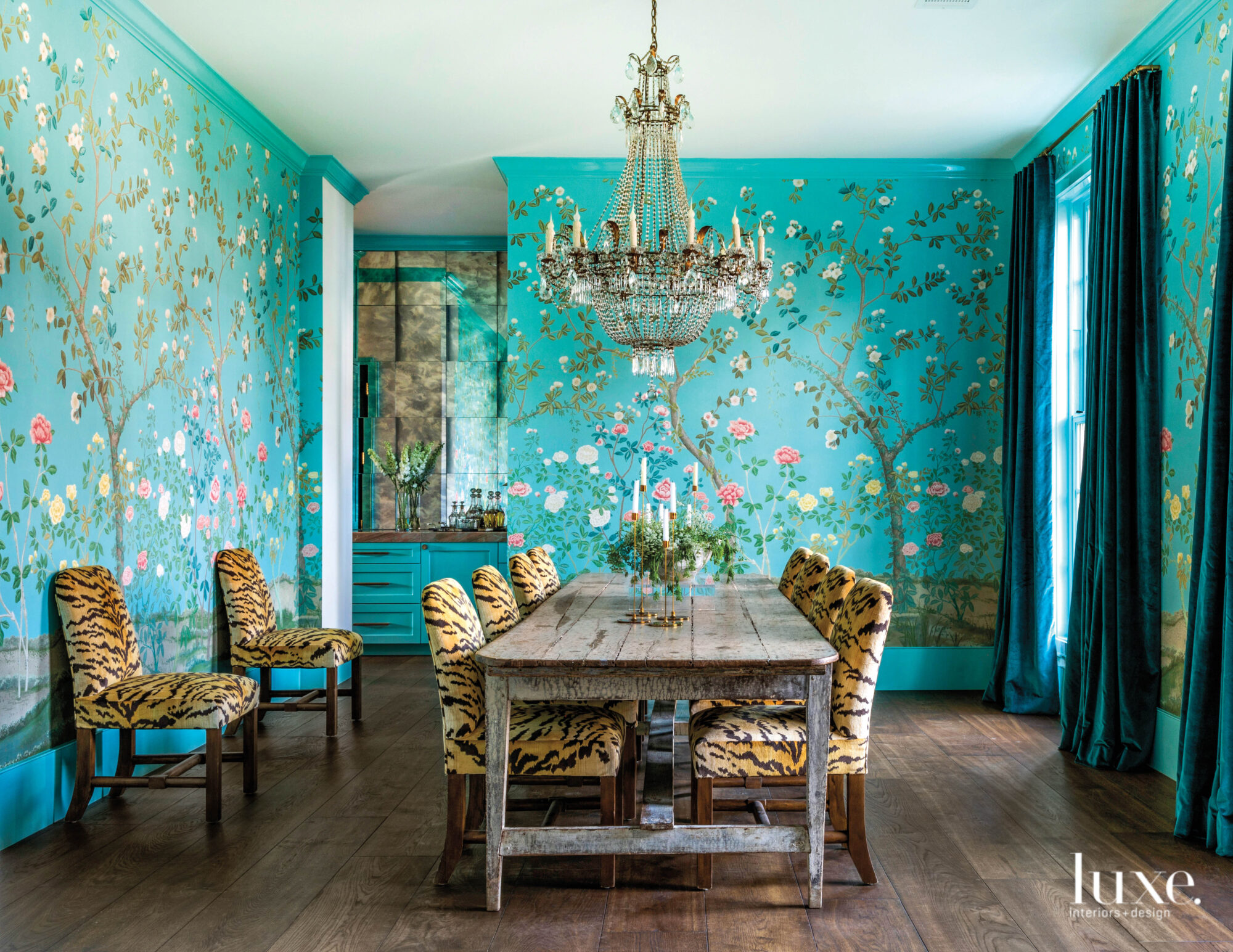 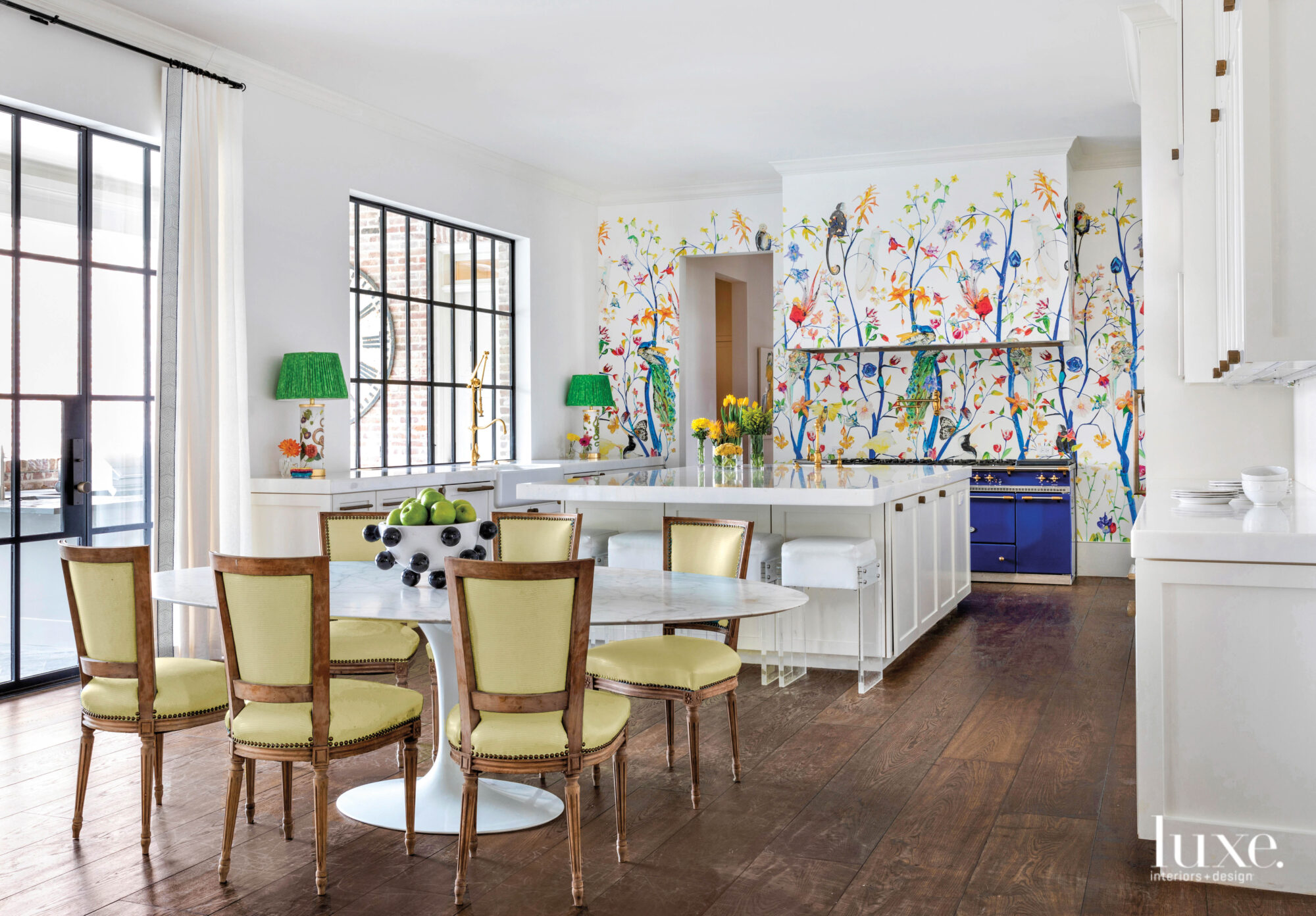 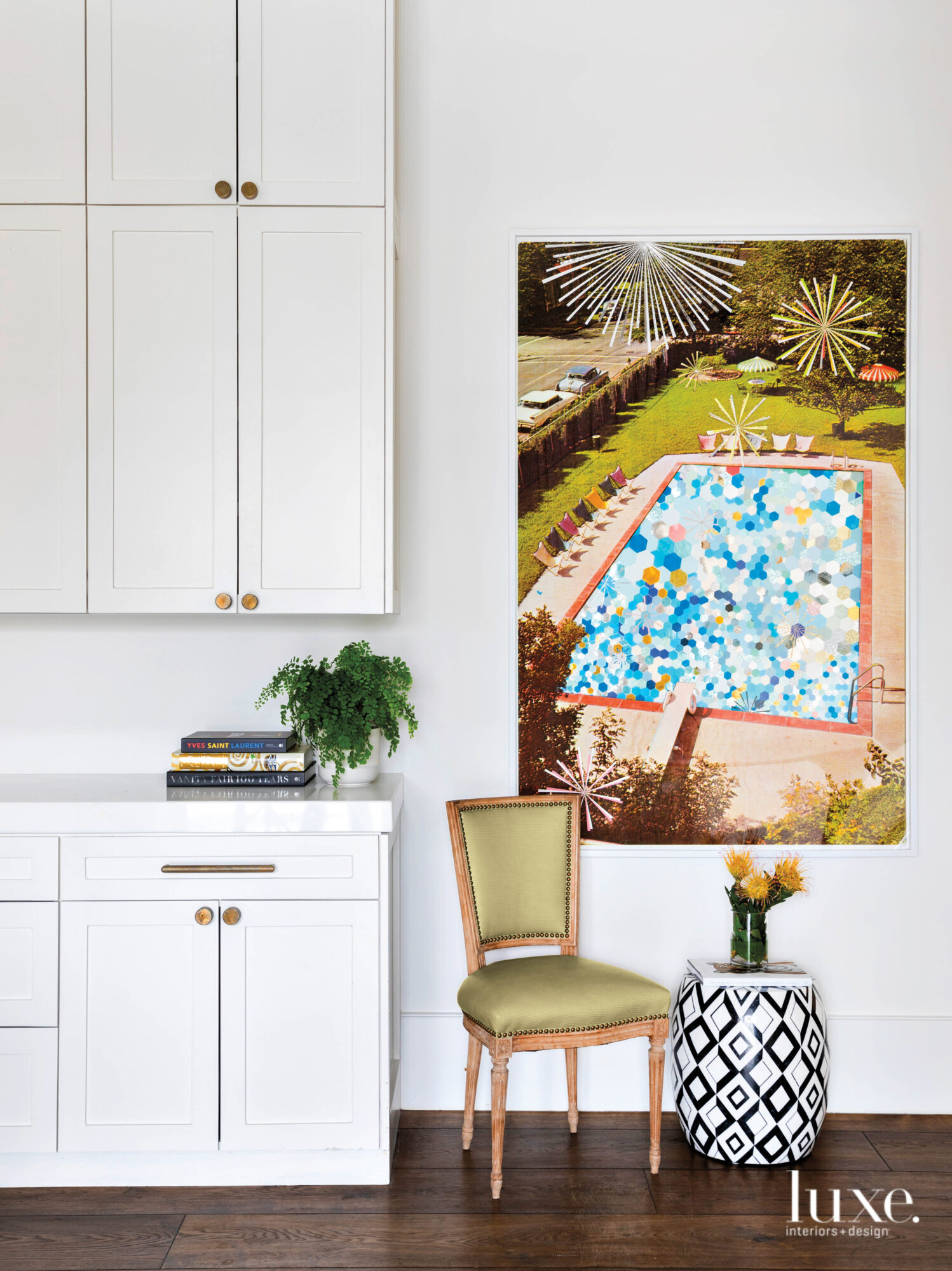 Pattern abounds in a daughter’s bedroom thanks to Voutsa’s Lips on White draperies from Supply Showroom and a floral Missoni rug. The custom bed is upholstered in a peachy Kravet velvet and dressed in Leontine Linens. A lamp from Mecox tops a nightstand from Area.

Pattern abounds in a daughter’s bedroom thanks to Voutsa’s Lips on White draperies from Supply Showroom and a floral Missoni rug. The custom bed is upholstered in a peachy Kravet velvet and dressed in Leontine Linens. A lamp from Mecox tops a nightstand from Area. 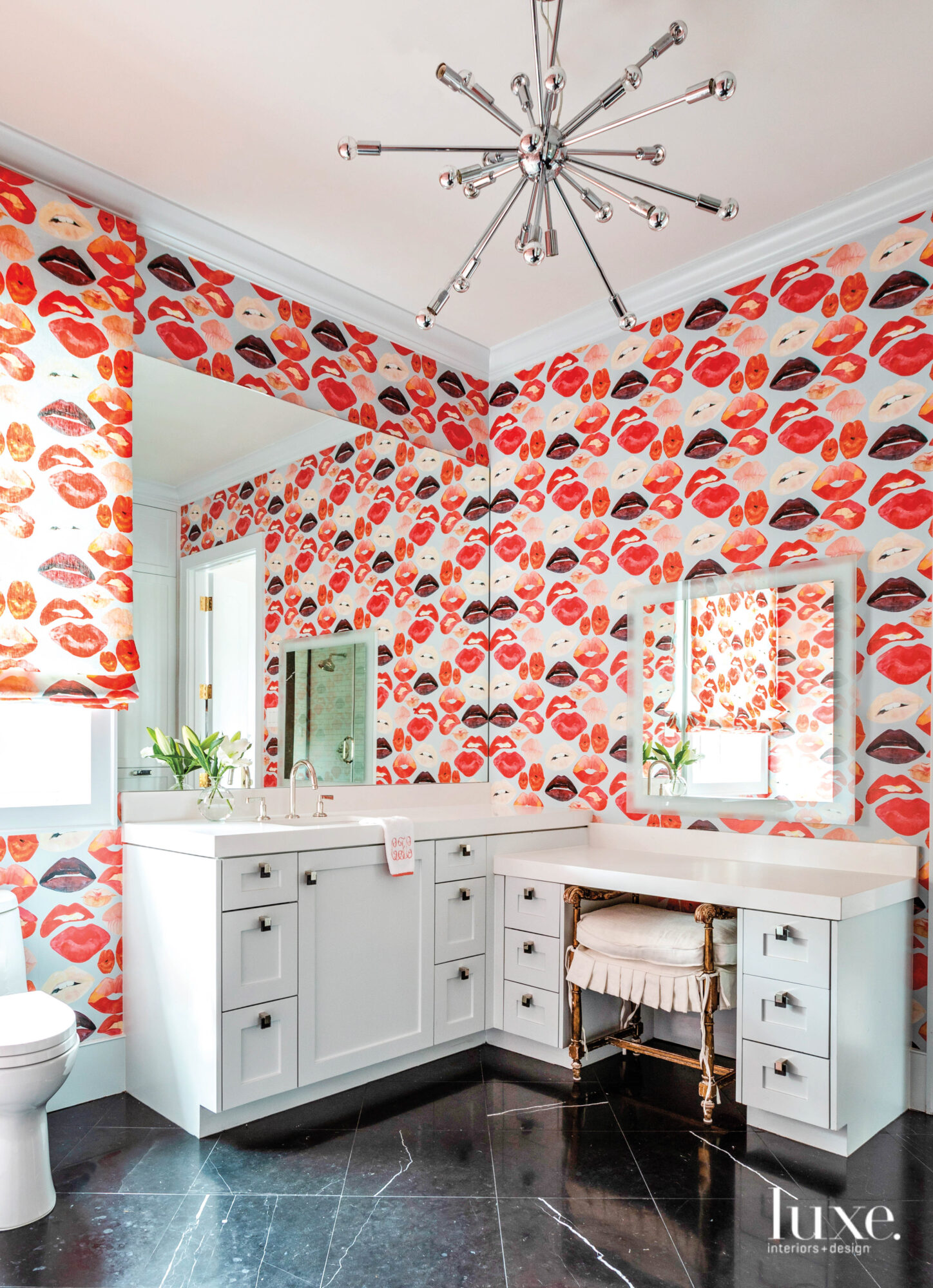 Voutsa’s Lips on White pattern carries onto a wallcovering in the daughter’s bathroom, popping against Ann Sacks black marble flooring.

Voutsa’s Lips on White pattern carries onto a wallcovering in the daughter’s bathroom, popping against Ann Sacks black marble flooring.

The vibrant design of this new Houston, Texas home was a watershed moment for the client, who had collaborated with designer Jennifer Martinez several times previously but always felt more comfortable taking the safe route. “This family is really social and fun,” says Martinez, having watched the brood expand to an energetic tribe of six since first meeting them in 2009. “They’re the kind of people who love to have parties—and if she could cover every single thing they own in animal print, she would.”

This time around, the wife came closer to doing that than ever before. “In the past, I was nervous and always went with the safe choice,” she says. “But over time, I became much more confident in knowing that if the home’s bones are traditional, then other things like paint and wallpaper can be changed.” That new mindset guided her down a more adventurous path for this project. “She wasn’t afraid to commit to something she may not like down the line,” explains Martinez. “Instead, she would say, ‘I like it now so let’s do it—and if we want to change it later, we can.’”

From the outside, the house gives nary a hint of the unexpected colors and patterns awaiting behind its tidy Georgian façade, which was brought to life by architect W. Travis Mattingly with the help of builder Brian Thompson and his director of construction Chris Thelen. “That was the husband’s only request,” Martinez says. “He wanted a sophisticated and traditional red-brick house.” To prevent a jarring contrast between exterior and interior, plenty of classical architectural details exist inside the front doors, including a sweeping staircase, wide-plank engineered-wood floors and elaborate crown moldings. Martinez also brought in some European antiques with elegant lines. “Obviously, this is a new house—and we weren’t trying to fool anyone that it’s been here for 100 years,” she notes. “But we still wanted to give some nods to the past.”

Even the dining room wallpaper honors tradition with its English garden-meets-chinoiserie motif. But its dominant bold turquoise color is anything but prim, especially when set off by dining chairs upholstered in an eye-popping tiger print. That wallpaper along with the entry’s James Conaway painting selected with help from art consultant Liz Anders of Liz Anders & Associates “were the jumping-off points for the entire downstairs,” Martinez says. The designer brought the paper’s turquoise hue onto the lacquered cabinetry in the adjacent butler’s pantry. And in the living room, she translated its warm tones into an earthy wall color—a rich terra-cotta hue with a finish so glossy “you can practically see your reflection in it,” Martinez notes—while repeating its cooler tones in a green velvet sofa and pair of custom, channel-tufted banquettes covered in turquoise vinyl.

The kitchen features yet another striking wallcovering, this one emblazoned with frolicking monkeys and tropical birds custom-printed on a durable commercial-grade paper that surrounds a cobalt-blue Lacanche range. “At first, I wasn’t sure about it,” the client says of the exotic pattern. “But I am so glad we went with it because it is such a fun print and fits our family.” That exuberance continues in the adjacent family room featuring Technicolor velvet upholstery and bird portraits by photographer Randal Ford, and even in the office down the hall showcasing floor-to-ceiling cabinets sporting a sunny yellow finish and walls papered with a colorful pattern of haphazard brushstrokes.

On the second floor, which accommodates all of the home’s six bedrooms, Martinez encouraged her client to take her derring-do a step further—onto the floors and ceilings. To that end, a faux-bois carpet and cloisonné-esque floral wallcovering transform the master suite’s dressing room into a moody jewel box. In one daughter’s bedroom, a sassy lip pattern enlivens the window treatments, walls and ceiling. For the son’s bedroom, Martinez chose classic navy-and-white stripes for the ceiling and a blue antelope-print carpet. And for the youngest daughter, she created a bedroom and bath awash in bubble-gum pink. “There’s nothing subtle about it,” Martinez says. “You have to love pink if you live in this room.”

And so it seems even the children of the house have embraced their mother’s daring new approach to interior design. “At the beginning, I had no idea what my vision was or that I even had one—but Jennifer helped me figure out my own style,” the wife explains. “She pushes me when need be and I love the risks we took.” 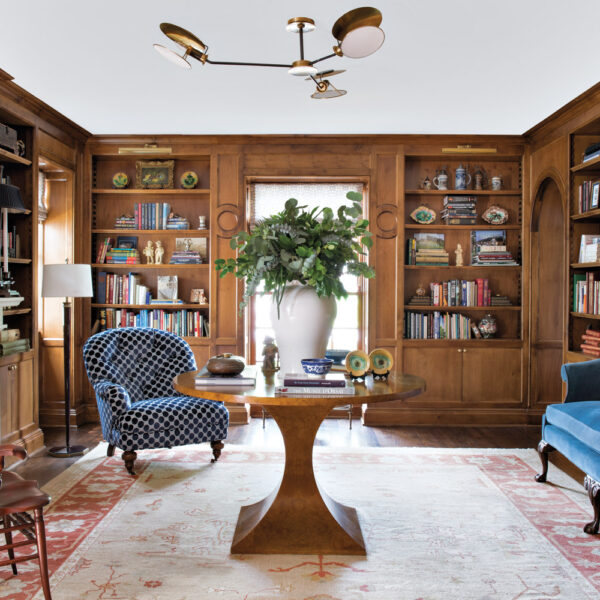 Inside A Renovated Dallas Abode That Honors Lineage And Antiques 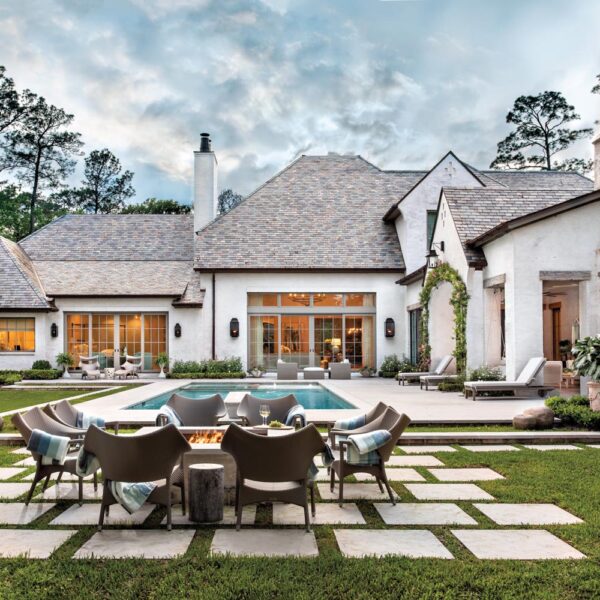 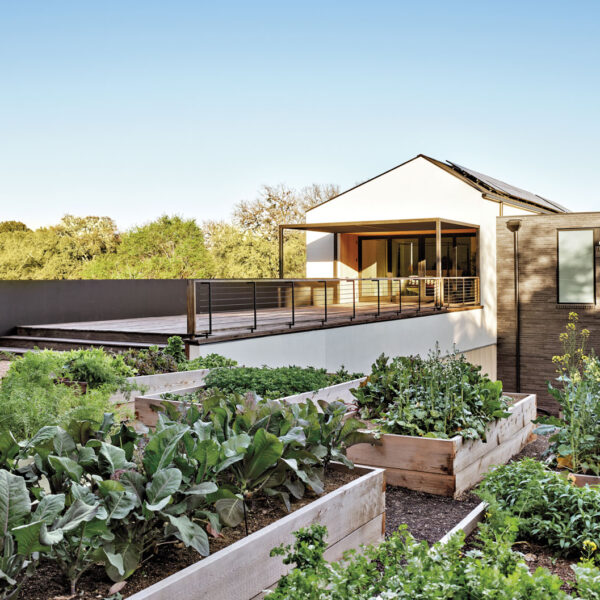 The Beauty Is In The Simplicity For This Modernist Austin Retreat 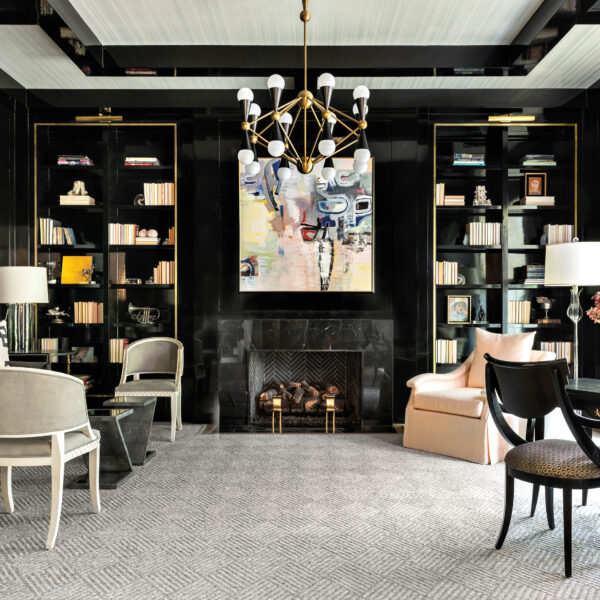 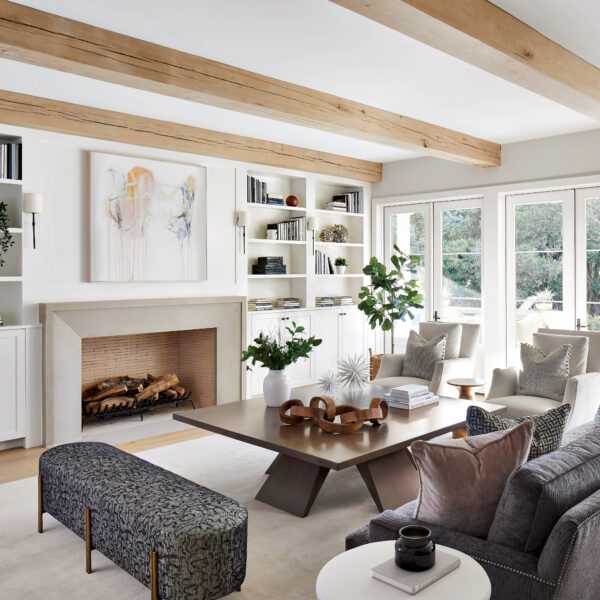 Don’t Tear Down A Classic: An Austin Remodel Saves A Bit Of History