When an empty-nester couple decided to move from their single-family home to a penthouse condo in the Uptown neighborhood of Portland, where stately Victorian houses give way to hip restaurants and boutiques, the process of making a new home was only the beginning.

A panoramic 14th-floor view through floor-to-ceiling glass dazzled, but its finishes and architectural details fell flat. With the help of trusted designer-turned-friend Kim Hagstette, the opportunity emerged to reinvent the space, engaging a spectrum of artisans and artists along the way. “The thought was, if we’re going to do this, I’d like to really do it thoughtfully and with a more modern design in mind,” the homeowner recalls. “It’s a complete departure from our previous home or any place that we’ve ever lived.”

With its contrasting light and dark tones, surfaces both textural and smooth, and the creation of intimate and expansive spaces, the home feels at once energetically urban and like a tranquil escape. “We can spot people walking their dogs and pushing their strollers, and also the traffic on the Fremont Bridge. On a clear day, we can see five mountains and the waterfront of the Willamette River,” the wife says. “And the light—you can see it changing, if not daily, hourly.”

Hagstette wanted to capitalize on those views and create an elegant and sophisticated but soft, modern feel. “We put an emphasis on layering textures and contrasting sheens,” she says. “You’re not slammed with haphazard color everywhere,” but rather carefully curated hues that are splashed throughout the penthouse via the art and textiles.

Indeed, whether it’s the textured ceramic tile backsplash in the kitchen, a beaded glass wallcovering in the entry, a surface of undulating twisted felt in the media room, or a metallic silk wallcovering in the master bedroom, the design offers not just changing textures but also what Hagstette calls a “shimmering” effect: be they shiny or muted, objects that attract light and bounce it around the room. “Every surface in the
home was touched,” the designer explains, “and as a result, the unit became chameleon-like. It just changes continuously. The owners are getting a different experience at any given time of day.”

Before move-in, the ceiling and various walls were stripped down to the studs to allow for more sophisticated HVAC, lighting and media systems, operated via in-house control monitors and smartphone; a redesigned fireplace wall in the living room; and new sapele mahogany doors and cabinetry. “Just going from a 6-foot-8-inch door to a 7-foot-6-inch sapele mahogany one visually made the place,” says building consultant Glenn Miller, who oversaw the construction changes to the unit. “The living room fireplace was difficult to engineer—it required a fresh-air intake, which gives the fireplace great temperature control—but I think that, along with the fully programmable lighting system, transformed the condo. You can really dial in the mood.”

A three-dimensional metal installation above that fireplace serves as evidence that both designer and client made a point of personally seeking out artists and artisans for the home’s décor and visuals, as if getting to know them imbued each piece with a story. The home includes artworks by several area painters and sculptors, but the craftsmen were given equal attention; their work is showcased, for instance, in the fabrics for the twisted felt and wood media wall and in the solid walnut-slab dining table.

Hagstette sprinkled in international and classic midcentury modern furniture, and though she enjoyed introducing her clients to a world of modernity, there’s still a feeling of inviting warmth that can’t be denied. As the homeowner puts it, “It’s easy to kind of cocoon in there. You feel like you’re wrapped in a warm cozy blanket. But then the other side of us likes to entertain, and the apartment can accommodate large groups—our largest so far has been about 80. I want people to walk into our home and feel comfortable, but also to feel the joy and the energy. It really is a joyful place.”

Bring On The Bling: An Aspen Home Gets A Dose Of Movie Star Glam 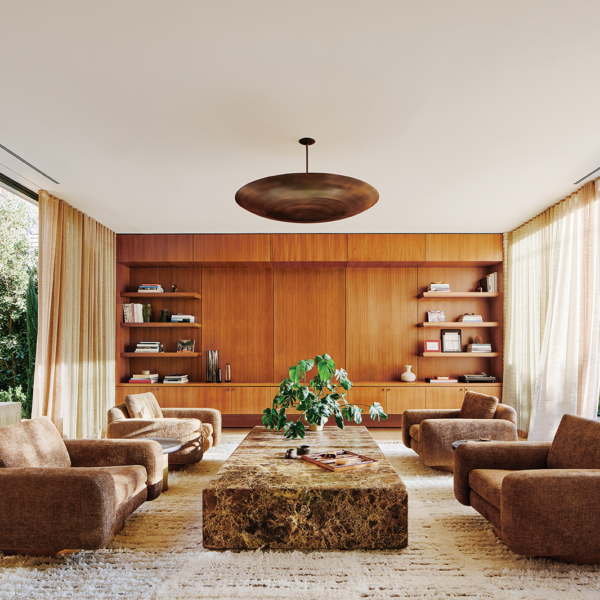