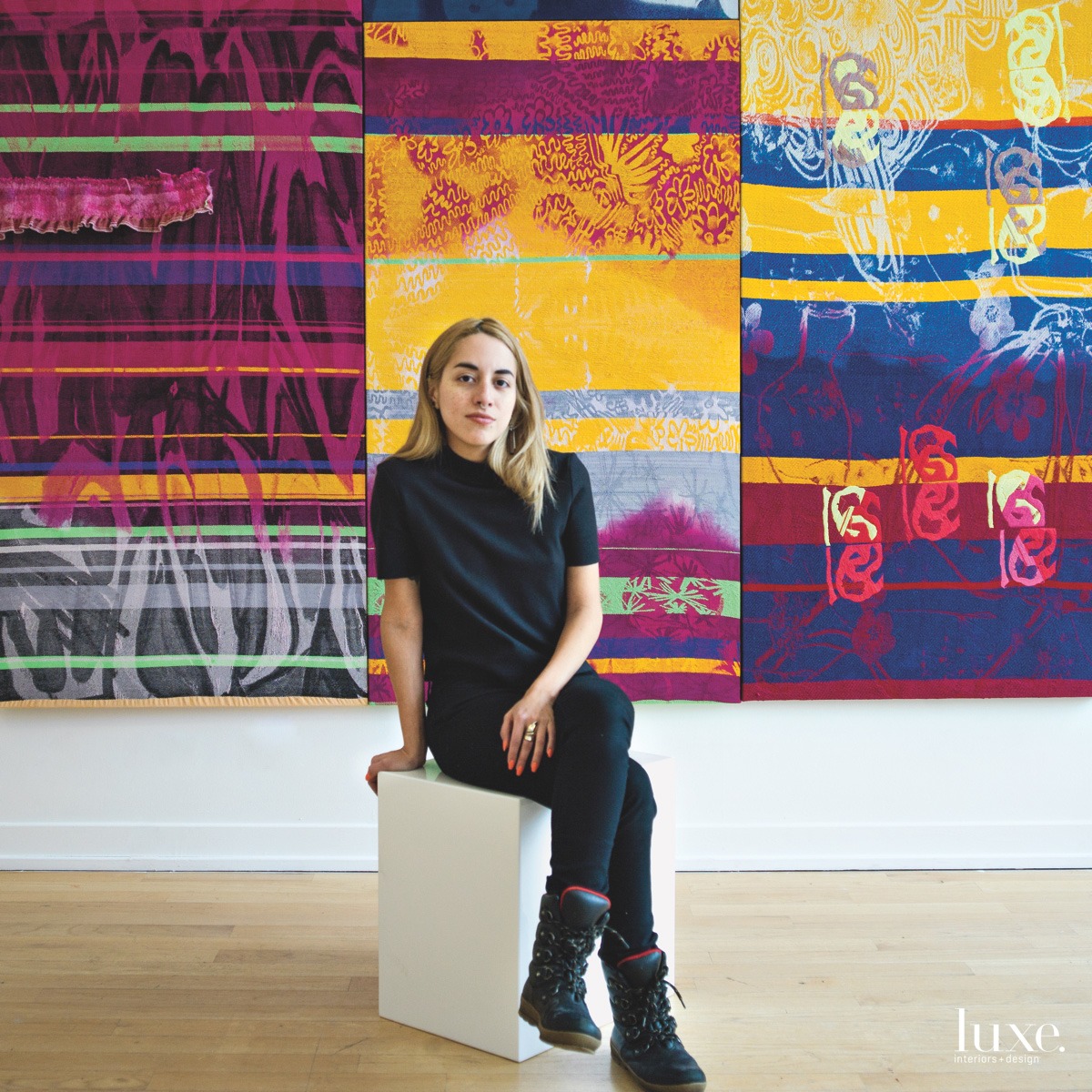 Chicago artist Melissa Leandro’s mixed-media pieces and materials are on display throughout her studio in East Garfield Park.

Melissa Leandro is a master at taking the familiar and turning it into something fantastical. The Chicago artist’s wondrous pieces, mostly wall art, are sprung from everyday materials–be it cotton, jacquard-woven fabric or even plastic tablecloths. “What I really love about textiles is they’re such common material,” she says. “Cloth is worn on our bodies and decorates our homes; it’s part of our lives. We’re so comfortable with it that it’s almost mundane.”

But there’s nothing banal about Leandro’s multilayered mixed-media creations, which grow more provocative and enigmatic upon closer inspection. If you sense map-like schemes in her pieces, you’re onto something: Whether Leandro is sketching while commuting to her East Garfield Park studio or her one-year residency at the Chicago Artists’ Coalition, testing cyanotypes (photochemical blueprints) or imprinting objects found during neighborhood walks or travel excursions, getting out and about is key to her process. “It’s like I’m using the collages and drawings I make initially as markers or landmarks in these broader topographies,” she explains. 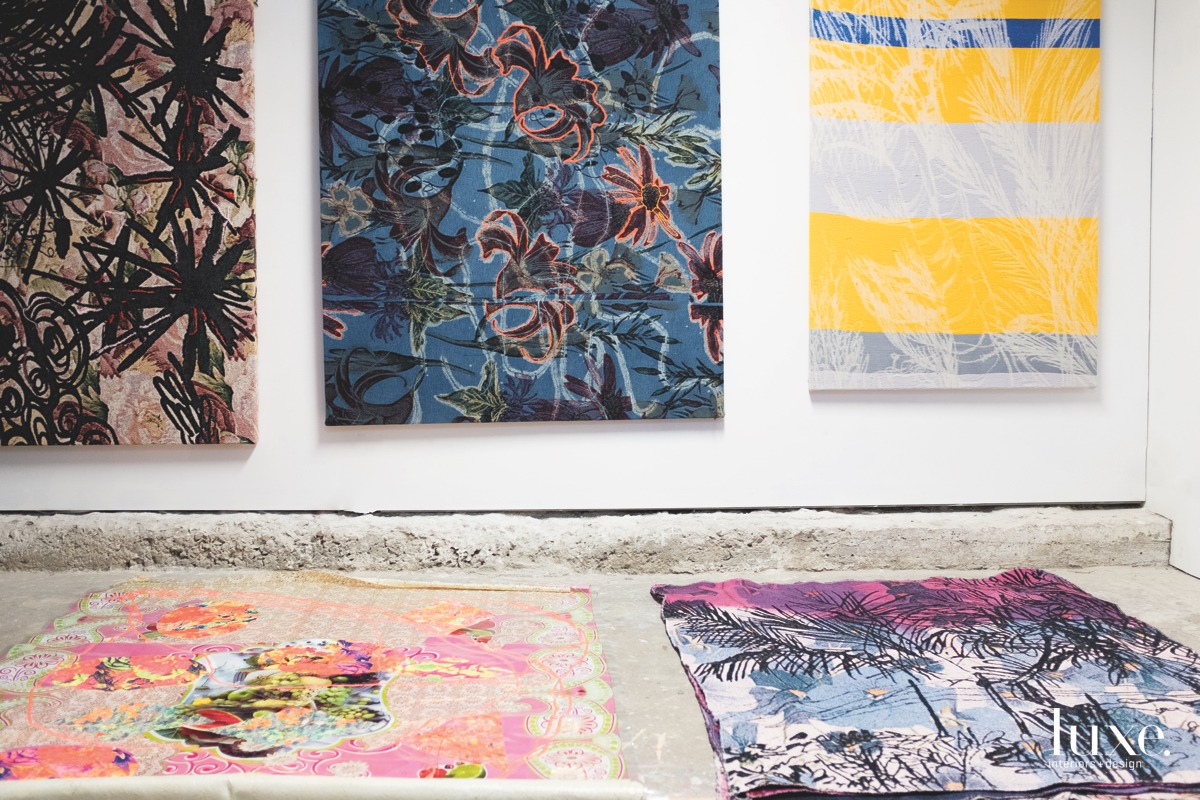 Hanging on a wall (left to right) are the jacquard weavings 136 Fireworks Casa mojada, Wet house and un poco de mi; on the floor are (left to right) Los platos de Sabado and an untitled piece.

Hanging on a wall (left to right) are the jacquard weavings 136 Fireworks Casa mojada, Wet house and un poco de mi; on the floor are (left to right) Los platos de Sabado and an untitled piece. 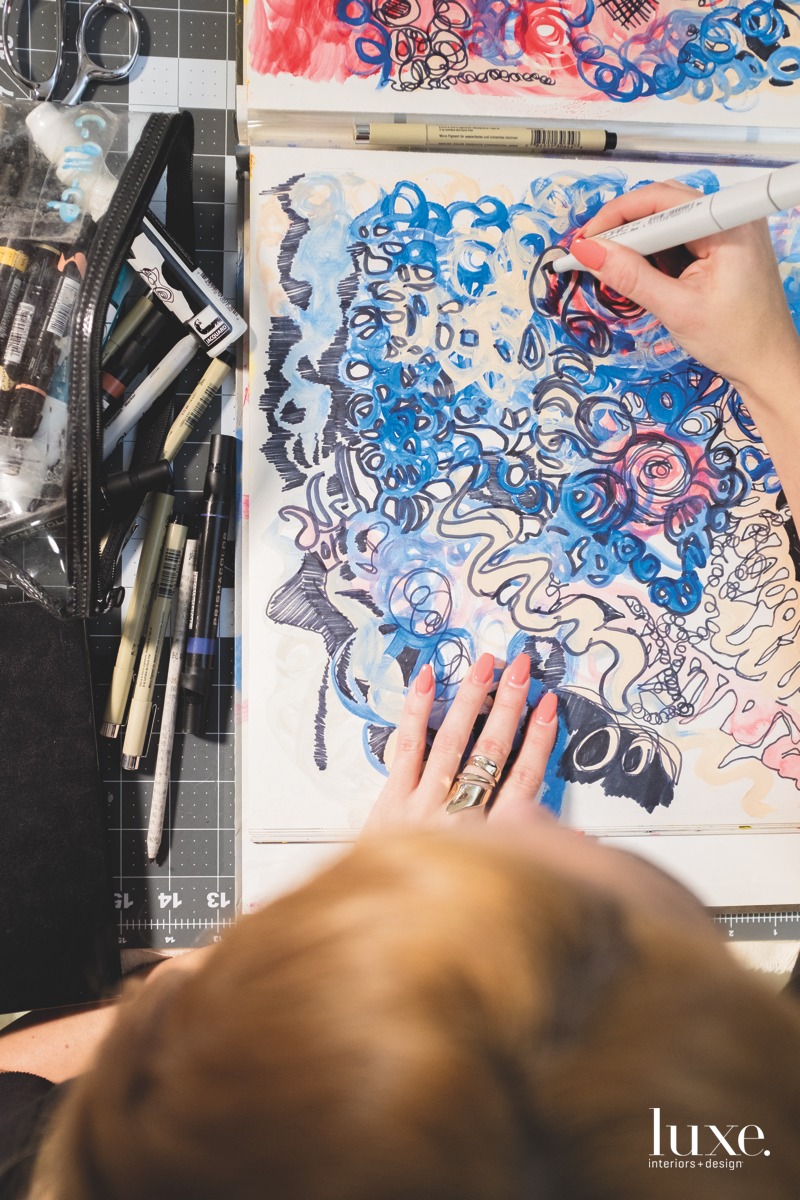 The artist works on an in-progress painting and drawing.

The artist works on an in-progress painting and drawing. 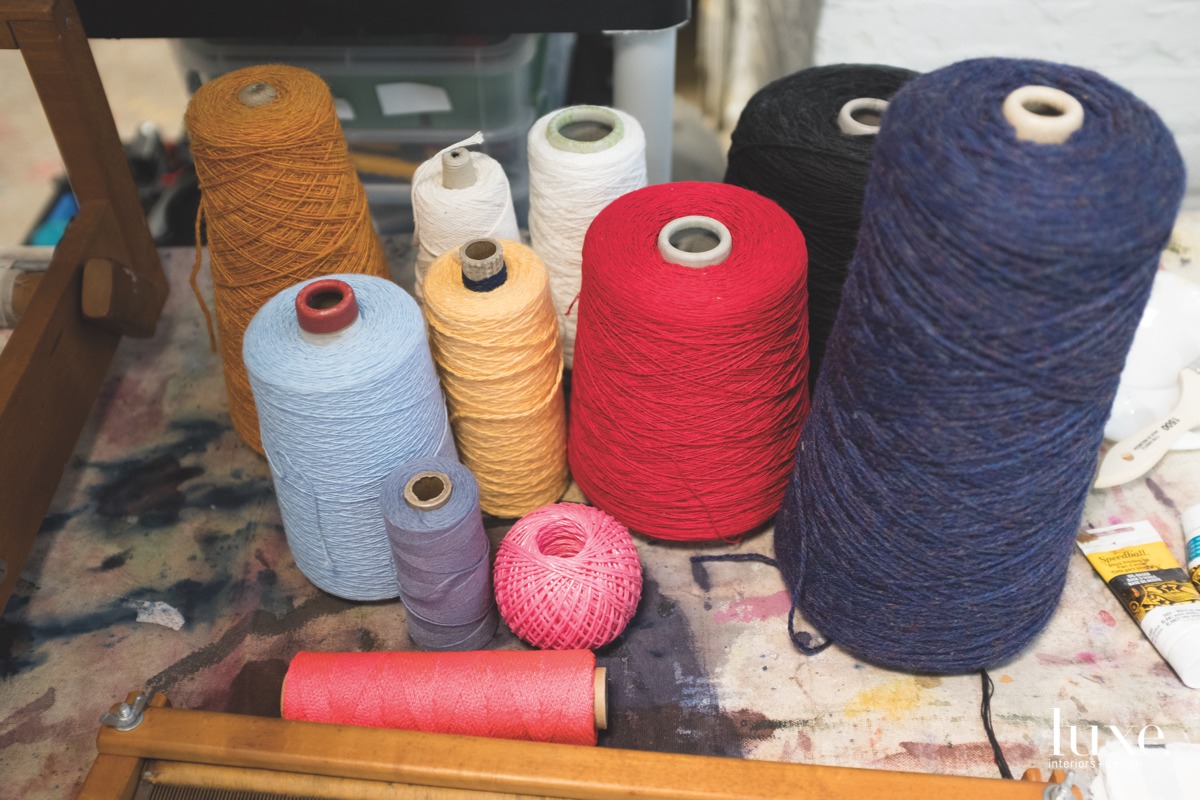 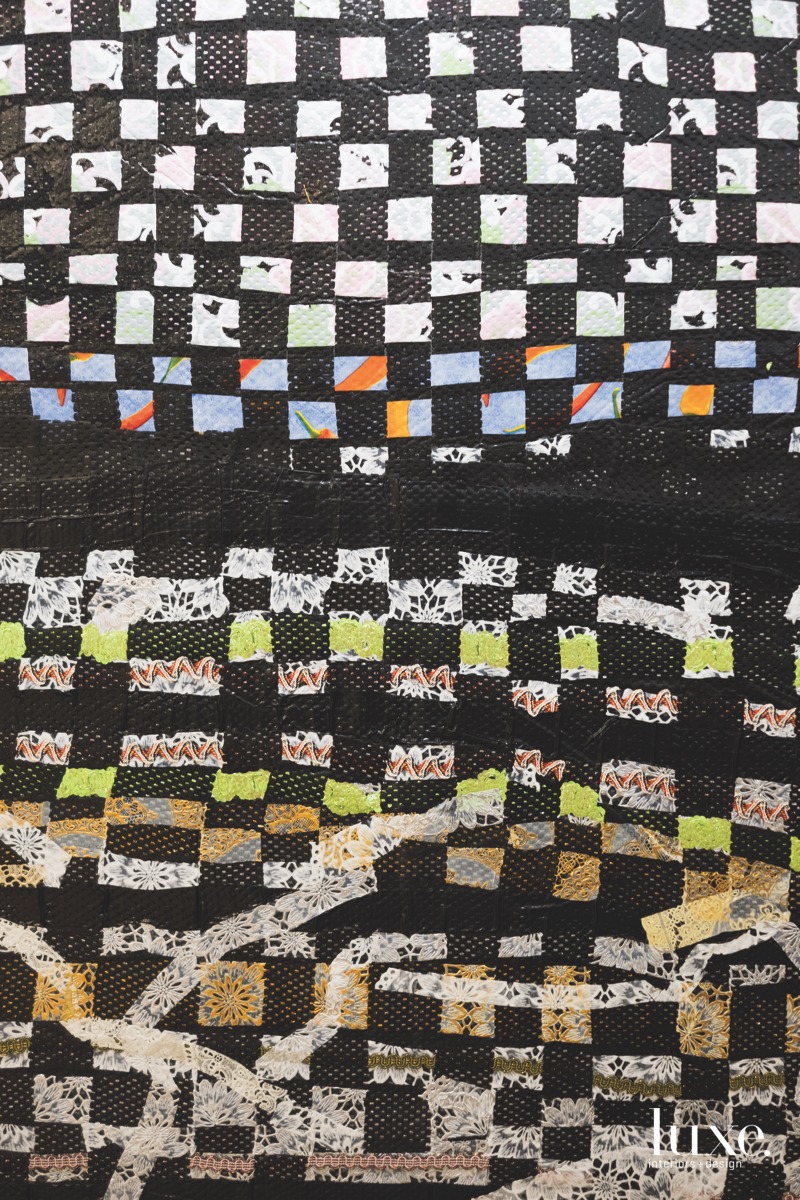 Her mixed-media work Kitchen table_crossword is made of woven plastic, rubber, electrical tape and rickrack, all heat-fused together.

Her mixed-media work Kitchen table_crossword is made of woven plastic, rubber, electrical tape and rickrack, all heat-fused together. 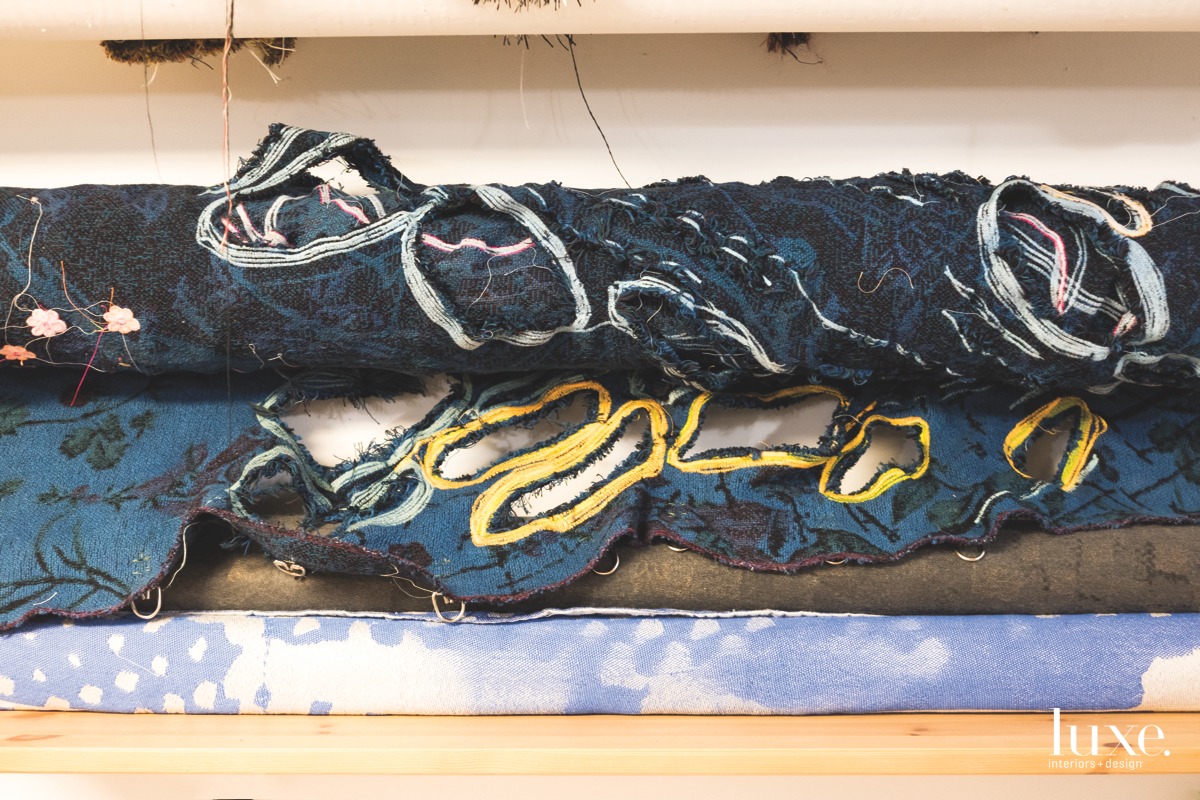 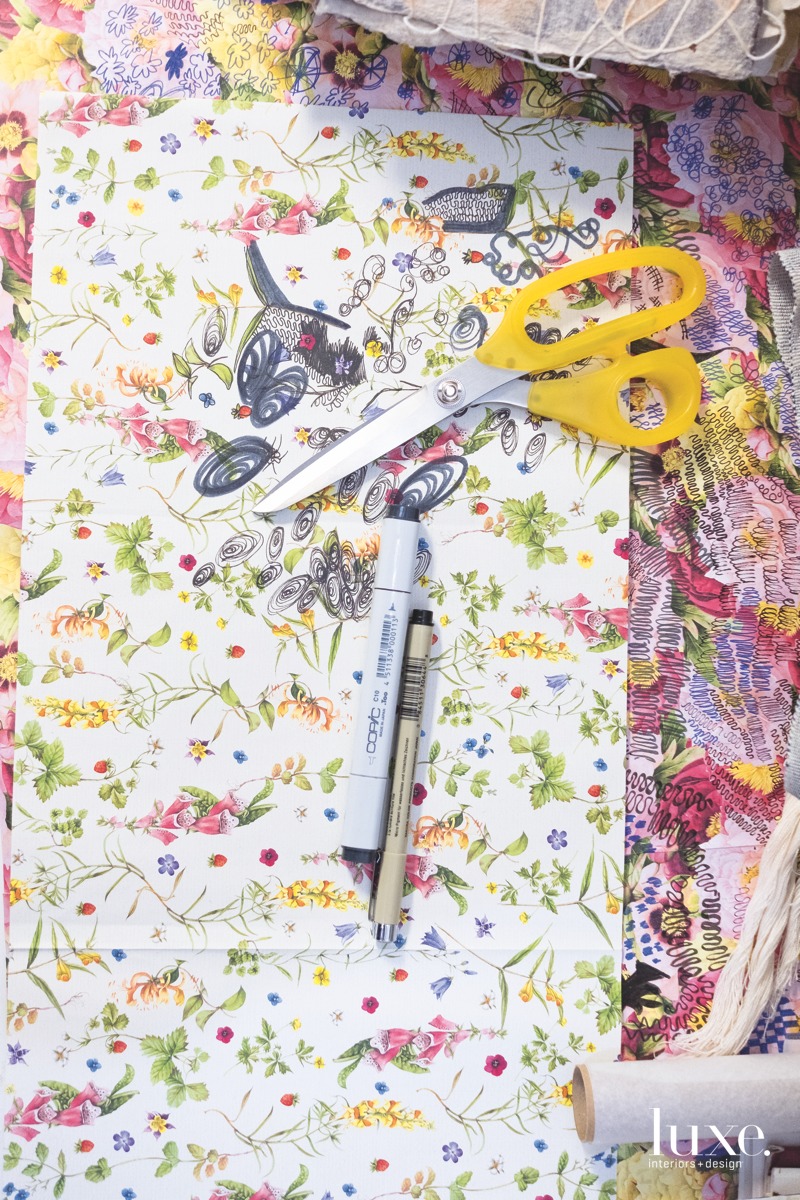 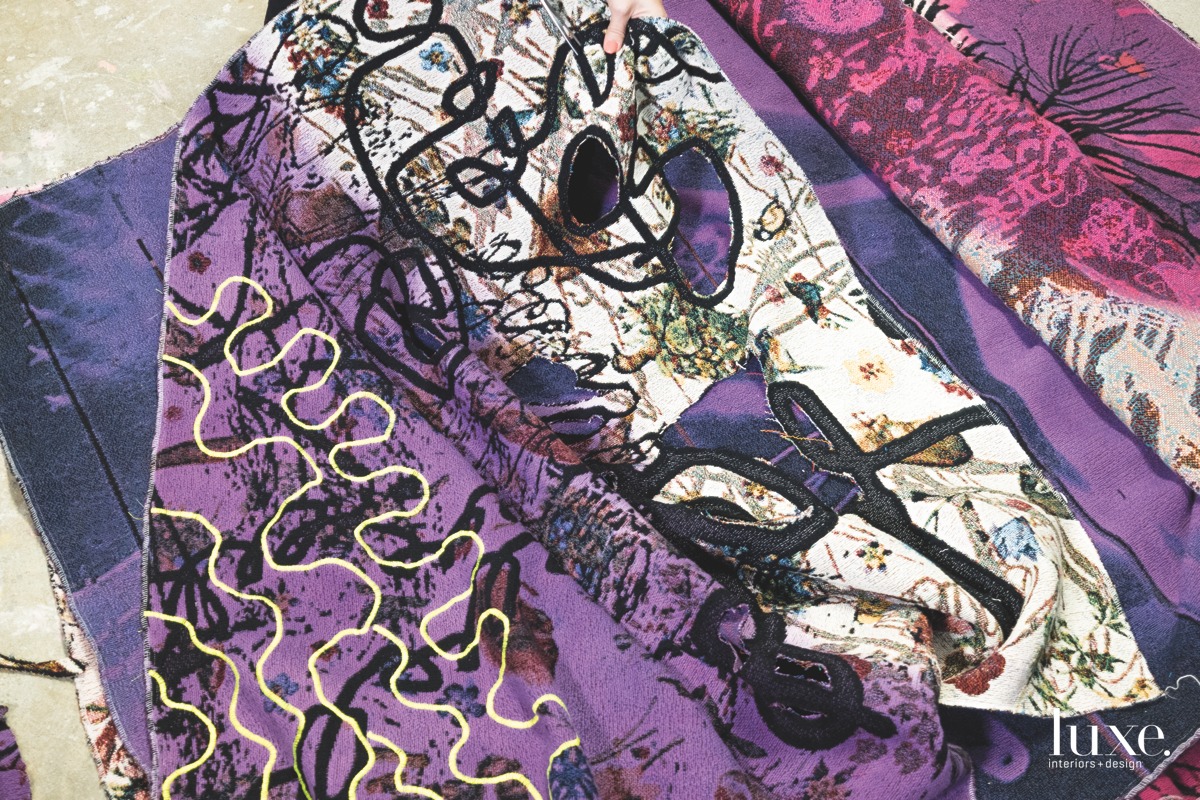 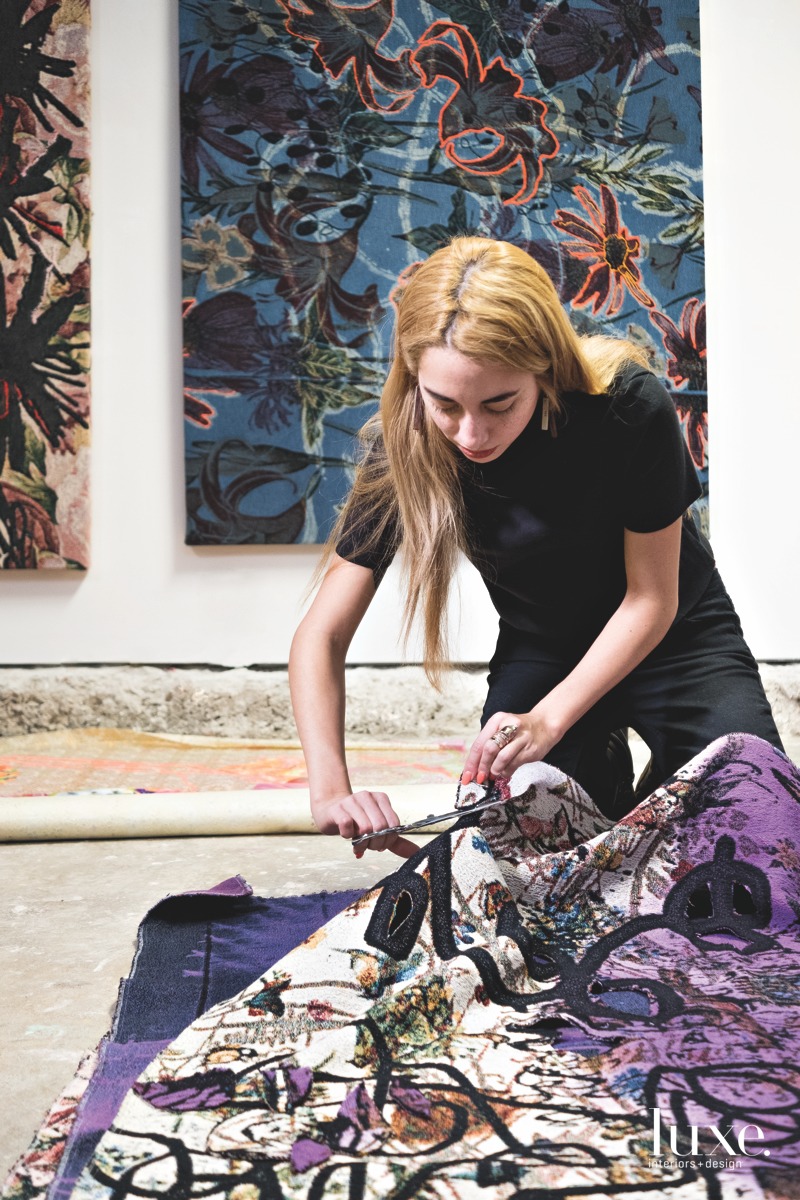 The geographical notes in the artist’s work take on deeper meaning when considering her background as a first-generation American of Costa Rican decent. “I think, in a lot of respects, that’s why I choose the patterns and textures I do,” muses Leandro, who was born in Miami and moved to the Windy City in 2008 to attend the Art Institute of Chicago. “There’s the idea of making art that expresses two cultures coming together–and often clashing.” Indeed, while most of her pieces are bright (or “poppy and hyper,” as she puts it), she acknowledges an underlying thread of melancholy.

Leandro first began exploring her artistic side through photography but felt the discipline wasn’t physical enough. “Then I took one weaving class in my sophomore year, and that changed my entire trajectory,” she says. “I became obsessed.” She even found a way to transition between the two art forms: “I would often weave portraits of family members or places I was exploring,” she says.

For weaving, patience is a virtue Leandro has in excess–an average piece can take four to six months. “Everything I do is so layered, and it is quite laborious,” she admits. “There’s weaving, stitching and embroidery, then I often dye the textile–or sometimes tear holes in it and patch them back up.” While each work is its own one-of-a-kind marvel, the intense hands-on construction is a cherished constant for the artist.

Leandro has shown in spaces like the Efrain Lopez Gallery, the Arts Club of Chicago, the Andrew Rafacz Gallery and Milwaukee’s Latino Arts, Inc. Her modus operandi is exhibit, exhibit, exhibit–and to never let the moss grow underneath her feet. Every three or four months, Leandro leaves the Windy City in search of inspiration: She’s driven up and down the California coast for 36 hours, spent time in Germany and the Netherlands and visited an expert weaver in Colombia. “I need those juices,” she says. “Traveling gives me time to draw, collect and research.”

Wherever her adventures take her next, it’s a safe bet Leandro will return with plenty of ideas. She strives to envelop audiences in abstracted spaces that function as unique environments yet evoke nostalgic feelings. “Maybe it’s, ‘Hey, I recognize that’s a potted plant,’ or, ‘That reminds me of a doily from my childhood home,’ ” she says. And if the viewer doesn’t grasp every reference? “The background story is for me,” the artist says. “An audience doesn’t need to know everything. In fact, it’s probably more fun if they don’t.”