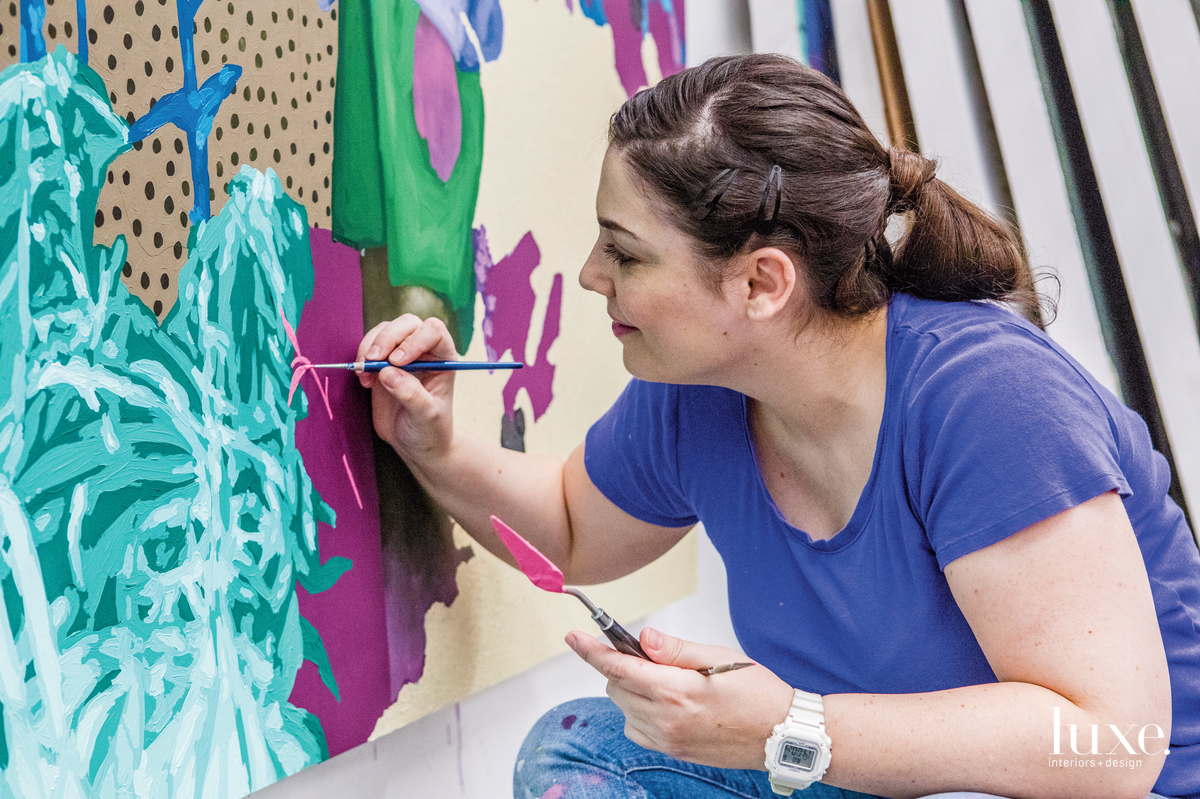 Daisy Patton paints most of her works as they hang on the walls of her studio.

From opulent paintings of sovereigns to family vacation snapshots, portraiture has long been used to fend off erasure by leaving behind a likeness for future generations to remember. But for Denver-based painter Daisy Patton, the most interesting images are those that no one recalls. Inspired by rifts between history and memory, the artist reclaims forgotten faces in her intimate portraits.

This direction seems inevitable for the artist who, growing up between Oklahoma and California, found an imagination haven in museums exhibiting classic European art. She learned to paint early on by copying regal portraits by old masters like Hans Holbein the Younger. Later, experimenting with painting, photography and audio at the University of Oklahoma and the School of the Museum of Fine Arts at Tufts University, she became more interested in stories that aren’t told in the dominant culture. “I often think about who is considered worthy of being memorialized,” says Patton. 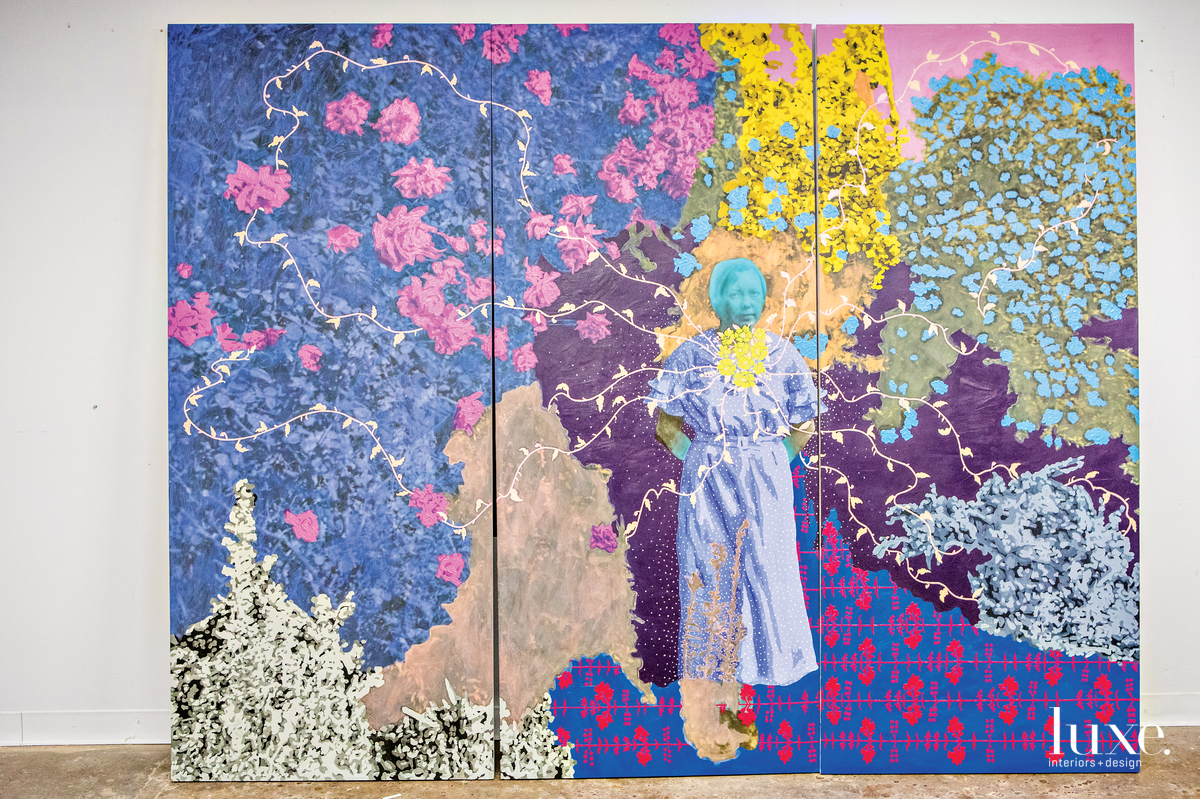 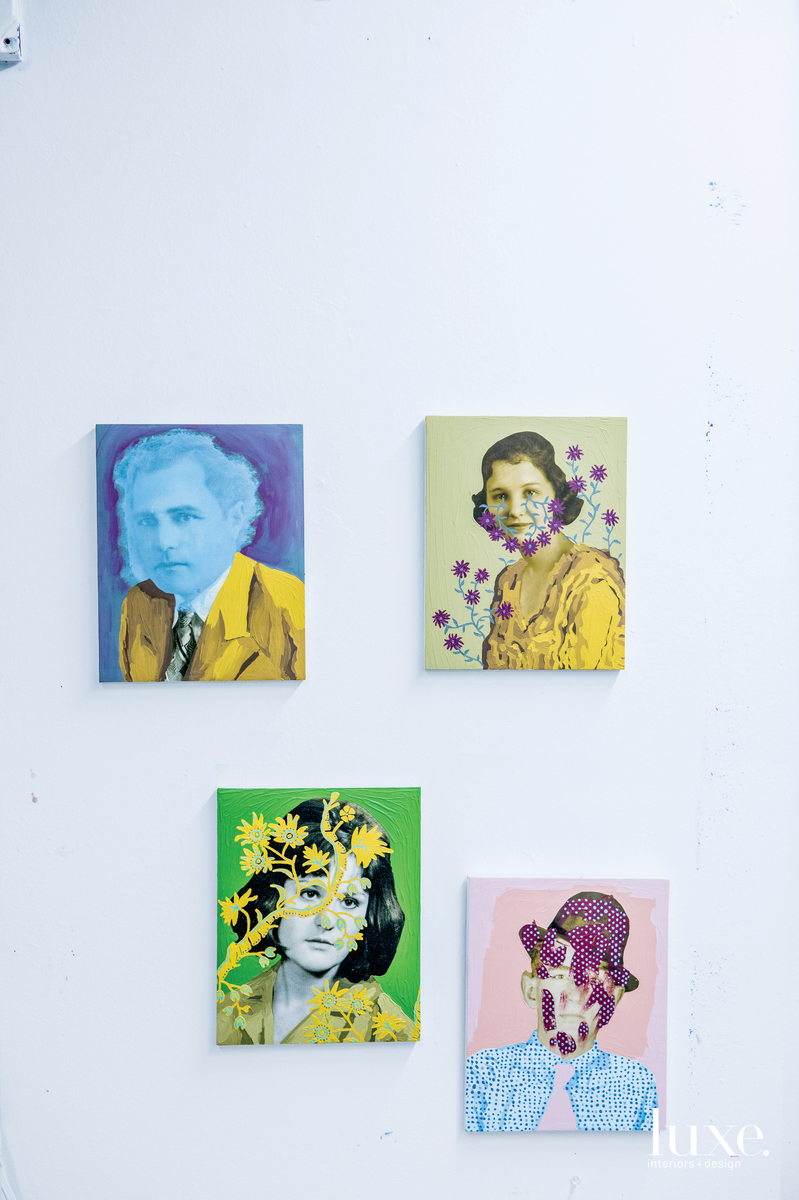 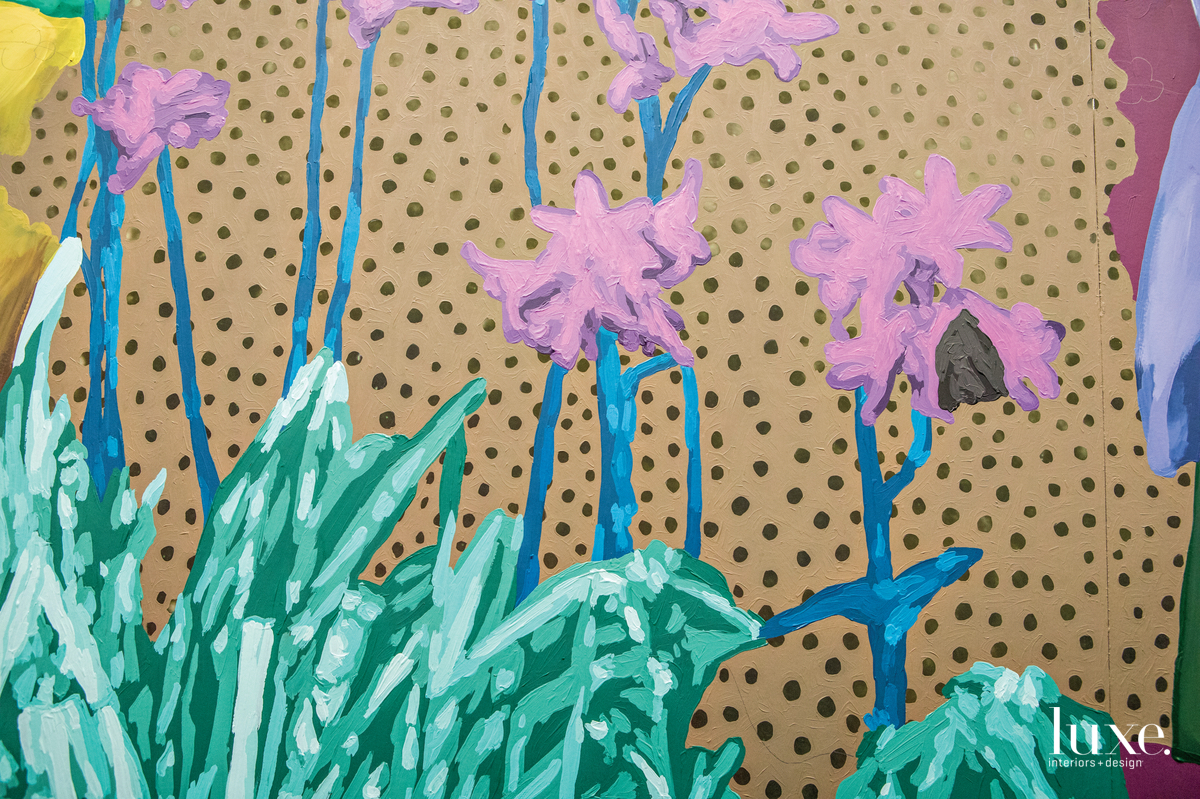 Florals are a frequent motif in artist Daisy Patton's work.

Florals are a frequent motif in artist Daisy Patton's work. 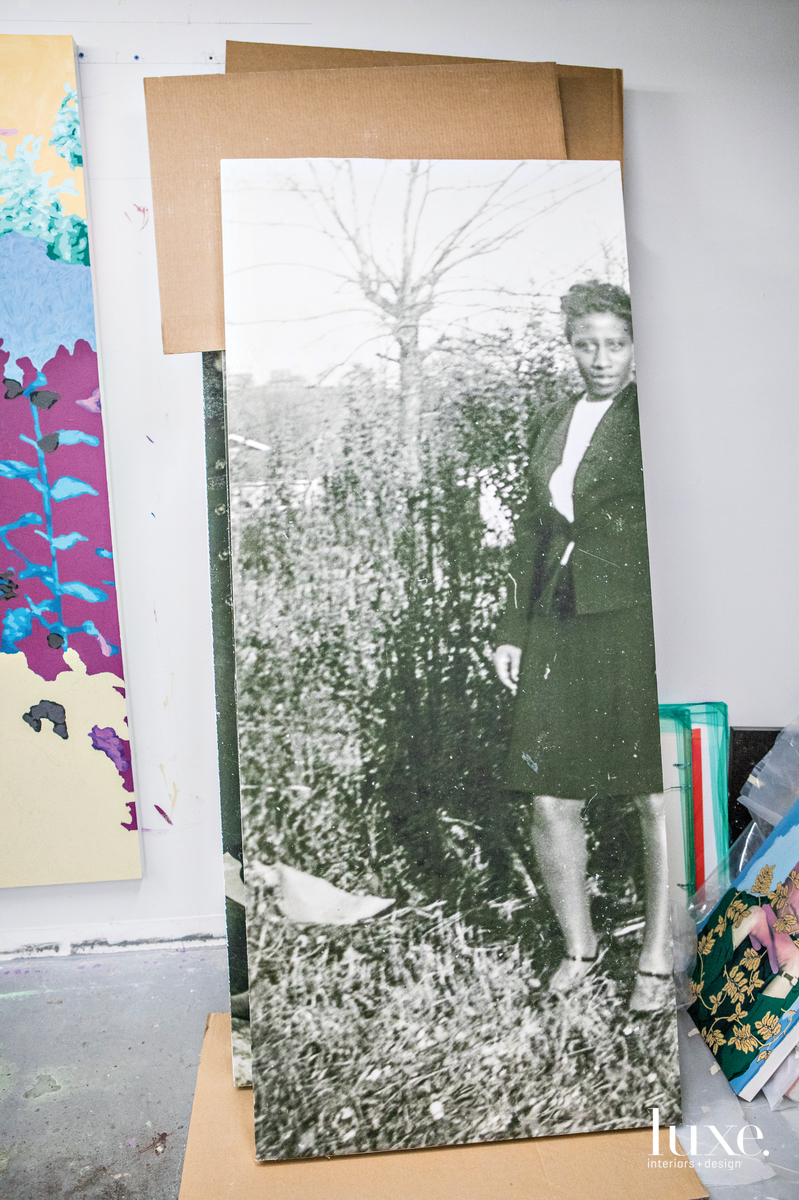 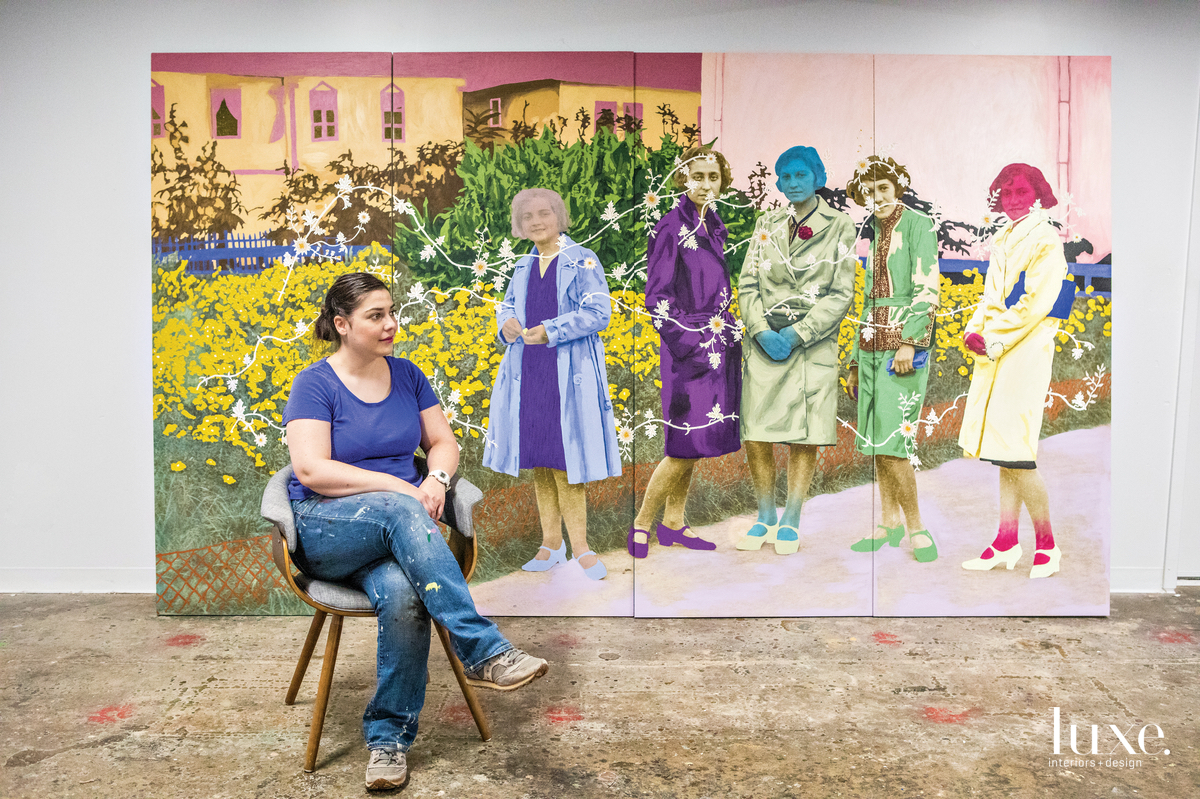 In another piece, Patton uses pattern to suggest a bond between the subjects.

In another piece, Patton uses pattern to suggest a bond between the subjects. 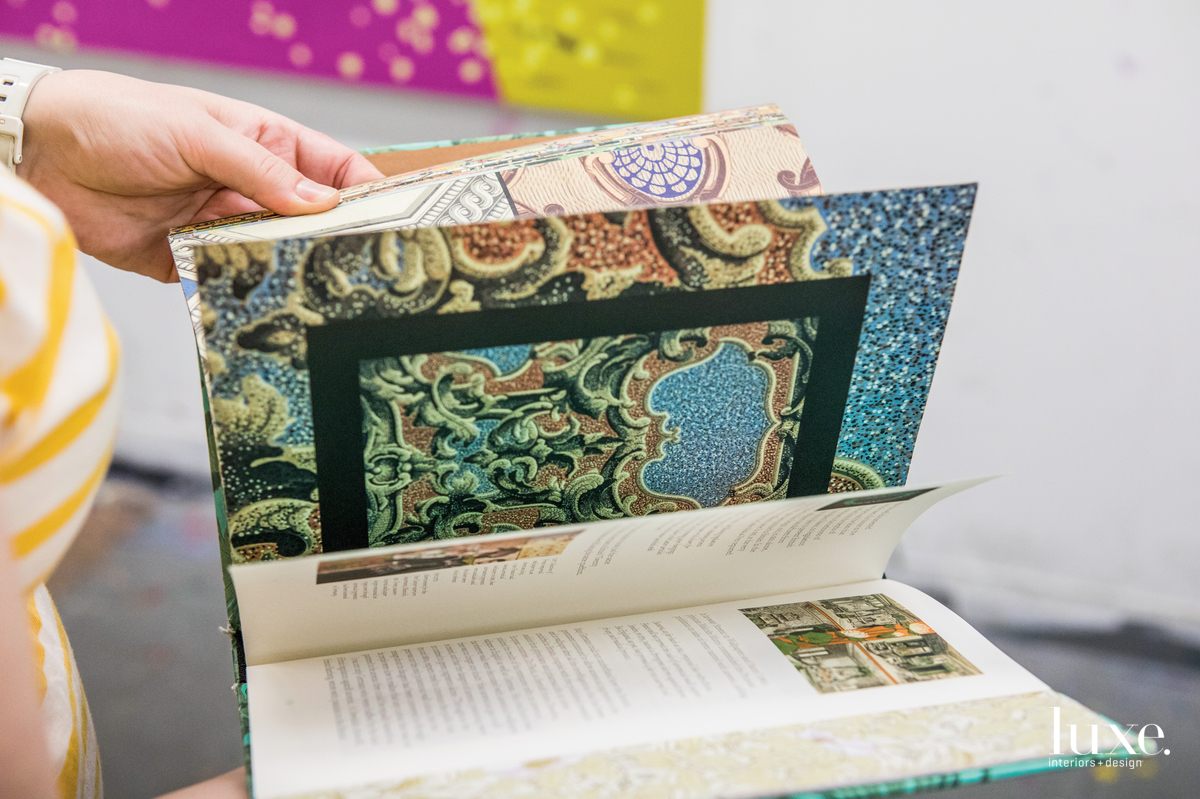 Commemorating the forgotten plays prominently in Patton’s ongoing series Forgetting is so long, where she paints over enlarged scans of pre-1970s photographs found at flea markets and on auction websites. “There’s something interesting about taking abandoned family photos of everyday people and monumentalizing them,” says Patton.

The artist enlarges the original photos into life-sized archival prints, which she mounts directly onto panels. To negotiate color placement, she prepares a mock-up in Photoshop as a guide. Parts of the photo’s original grayscale are exposed, which interplay with her lush hues and ornate patterns, some of which are adapted from 19th-century wallpaper designs. While painting, Patton functions as an emotional archaeologist, mining the photos for insight into her subjects. She uses color to illuminate features and weaves floral patterns to link familial bodies together, underscoring their bond.

Vibrant hues and flowery adornments often obscure her subjects’ faces, and Patton says the effect can feel shocking, almost like seeing a statue desecrated by spray paint. But for her, defacement doesn’t necessarily mean ruin. “Defacing objects can shock them back into being,” argues the artist. “It’s the sensation of noticing a monument after it’s vandalized, and suddenly it’s present and alive again. These paintings are all about bringing strangers into the present.”

Patton’s most recent pieces delve deeper into the photographs’ context. In “This Is Not Goodbye,” her latest show at University of Colorado Boulder Art Museum, the artist explores the culture of mourning in massive paintings of antique funeral photography. For her current show, “A Rewilded Arcadia,” at K Contemporary in Denver, Patton examines nature and the human body, illuminating how people try to tame the natural world and how nature pushes back.

The artist’s work often prompts inquiries from viewers who think they might be related to the subjects, but only once has that been the case. That sense of perceived connection carries powerful significance for the artist. Says Patton, “I think of my whole body of work as a mirror, reflecting how we see our own family memories.”