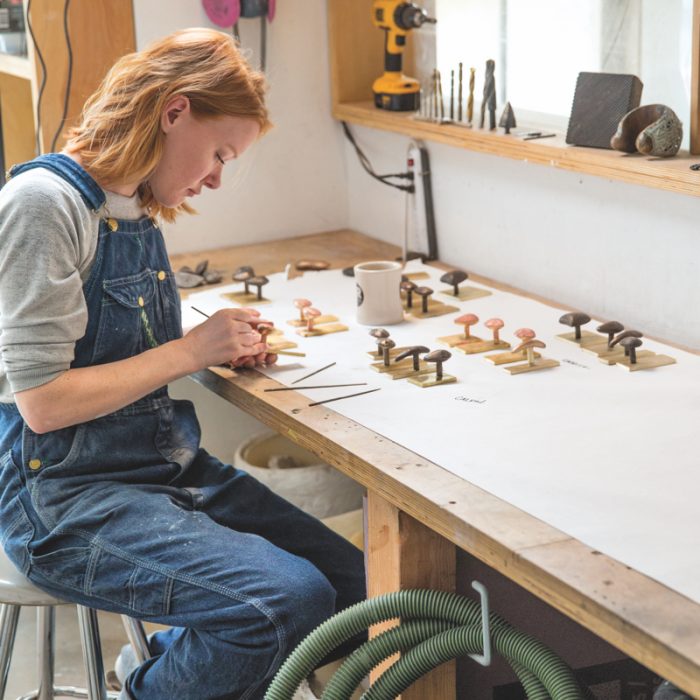 Early on in her practice, Parker focused on lighting.

Imake the things that I love and want to have, and I trust that, somewhere out there, someone else might want them, too,” says lighting and furniture designer Elizabeth Parker of Parker Works in Portland. Her oeuvre is elegant and handsome–a series of sculptural pieces in black, white and gold hues meticulously crafted using gypsum concrete, plaster, walnut and brass. Large, faceted mobiles were her initial product, followed by her Funny Buddy floor lamp–three brass legs supporting a rounded cover she calls a noggin. The lamps were the first items a shop requested to carry, and it began everything: Parker Works had arrived.

Since launching her studio in 2014, she has expanded her collection, offering variations of the Buddy lamp as well as sconces, tables, trays, coat hooks and drawer pulls. All are deeply original works that reveal an attraction to simplicity and significance. “Finding meaning in mundane things is really important,” she says. With their subtle, organic shapes, her designs could easily be viewed as a likely progression from the rocks and acorns she collected as a child–natural souvenirs taped into treasured three-ring binders. 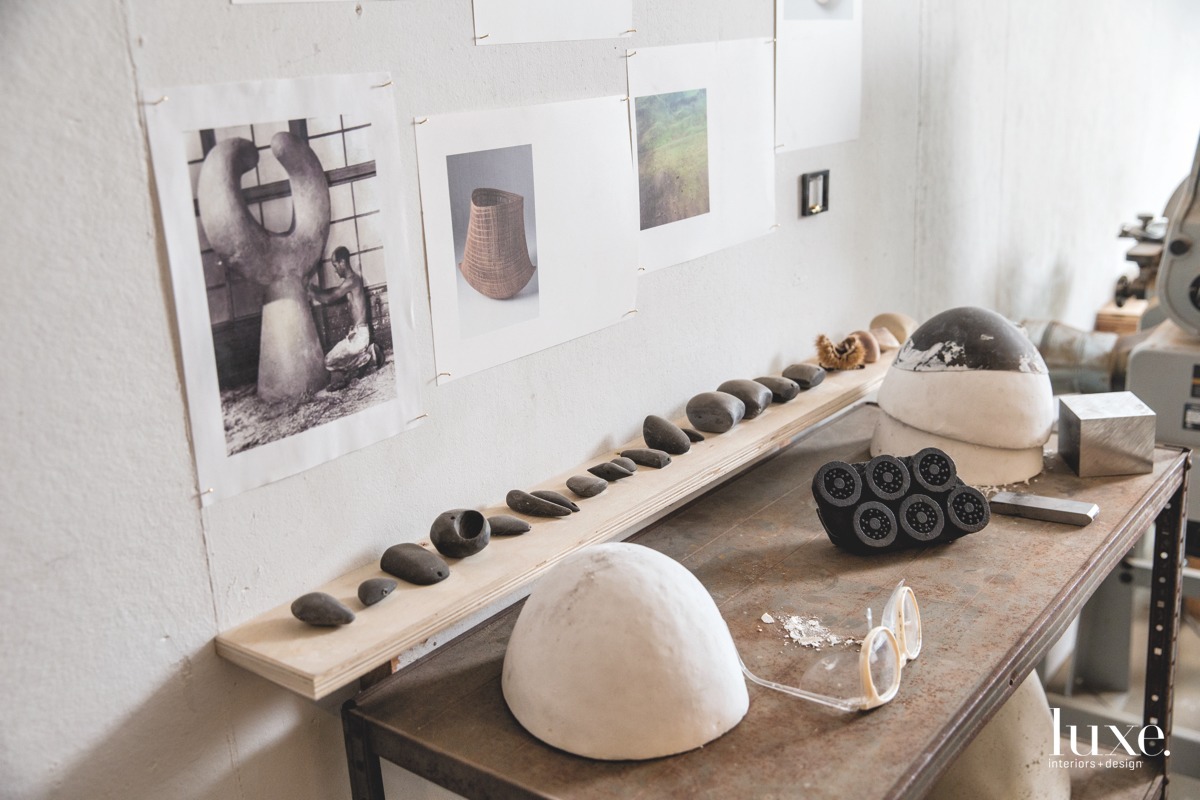 All of her pieces have an organic softness to them and, given her production methods, are one of a kind.

All of her pieces have an organic softness to them and, given her production methods, are one of a kind. 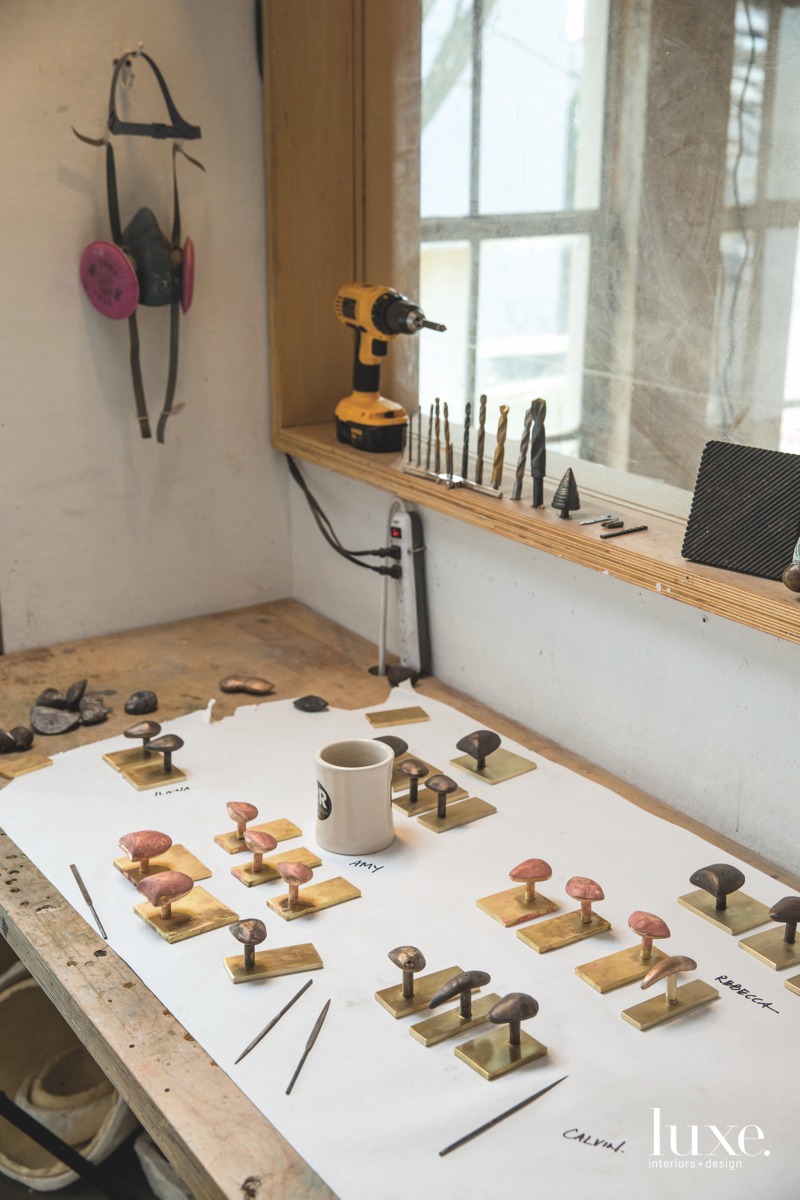 The materials translate into pieces such as rustic hooks.

The materials translate into pieces such as rustic hooks. 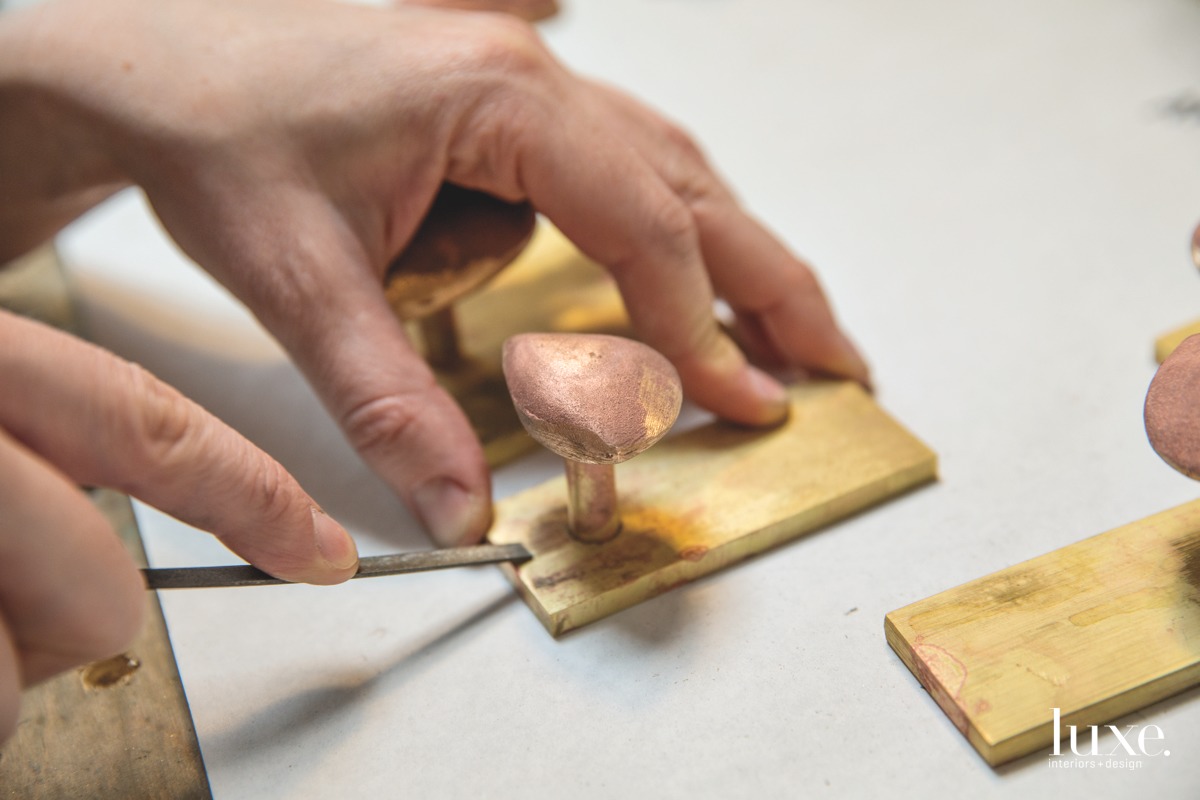 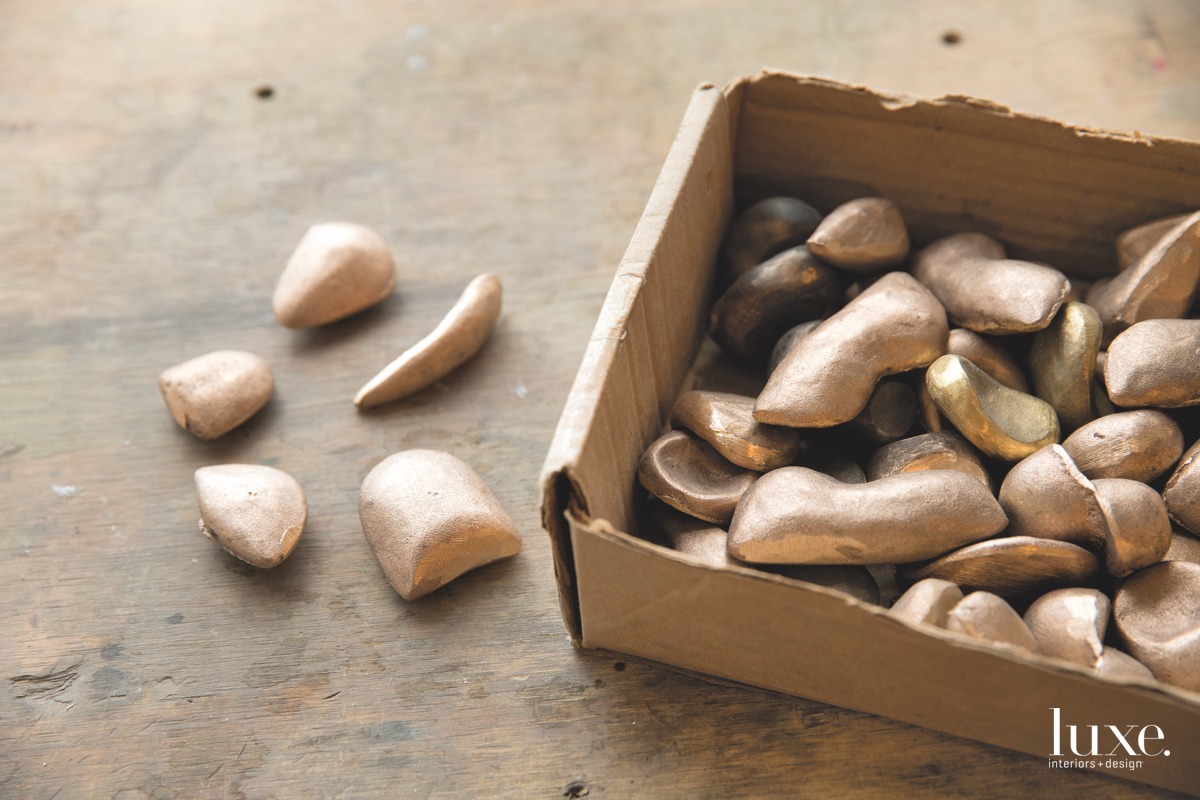 Designer Elizabeth Parker crafts furnishings in a variety of media in her Portland studio, including bronze and wood.

Designer Elizabeth Parker crafts furnishings in a variety of media in her Portland studio, including bronze and wood. 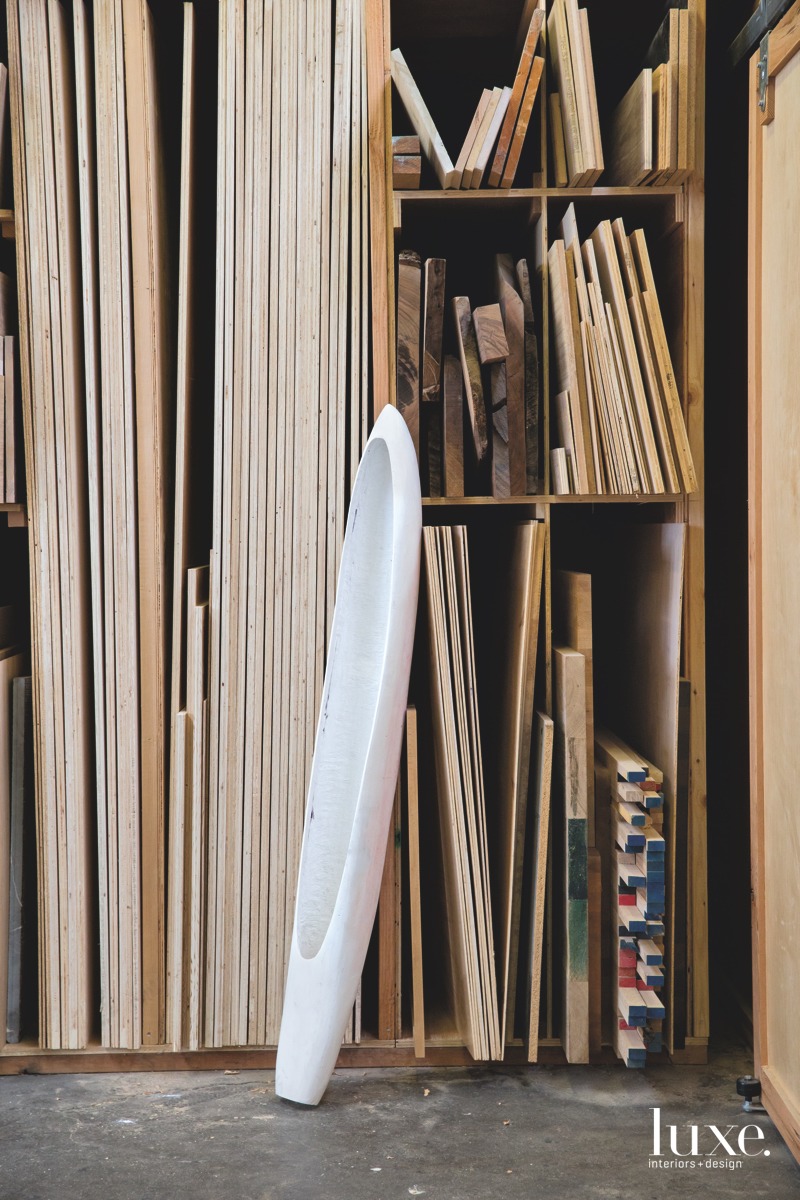 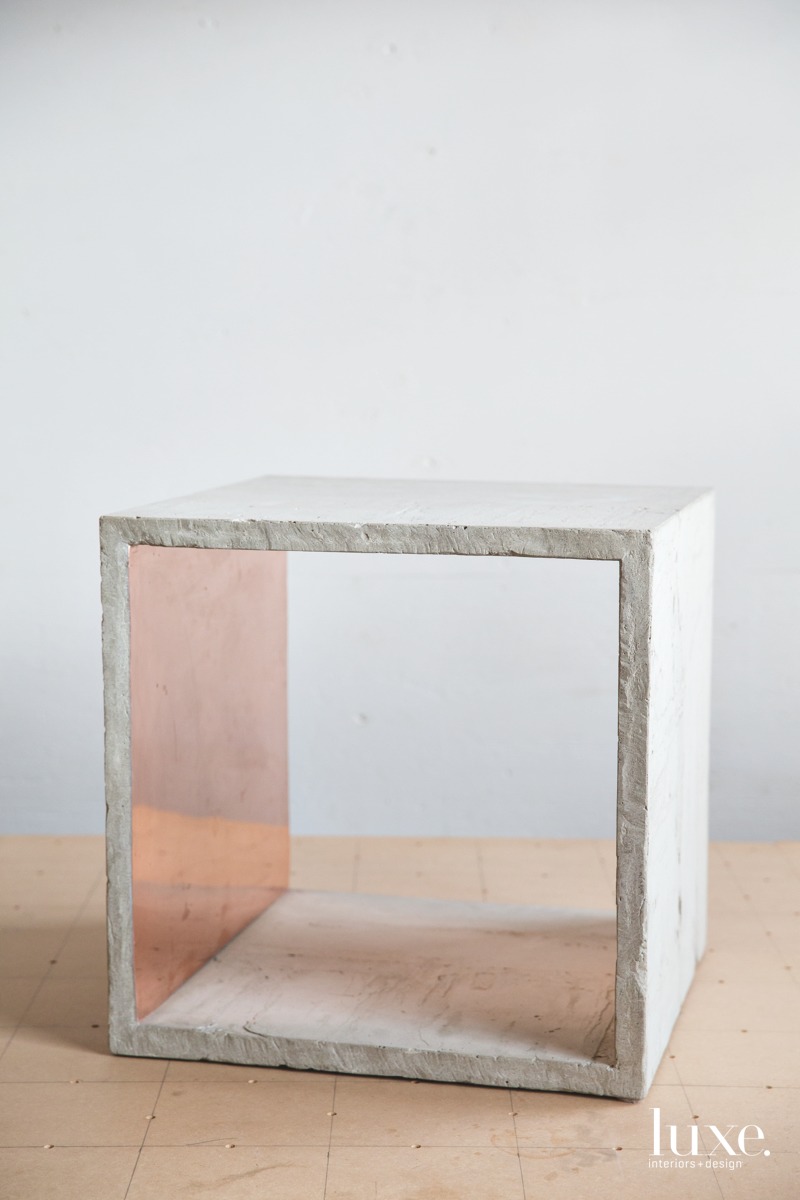 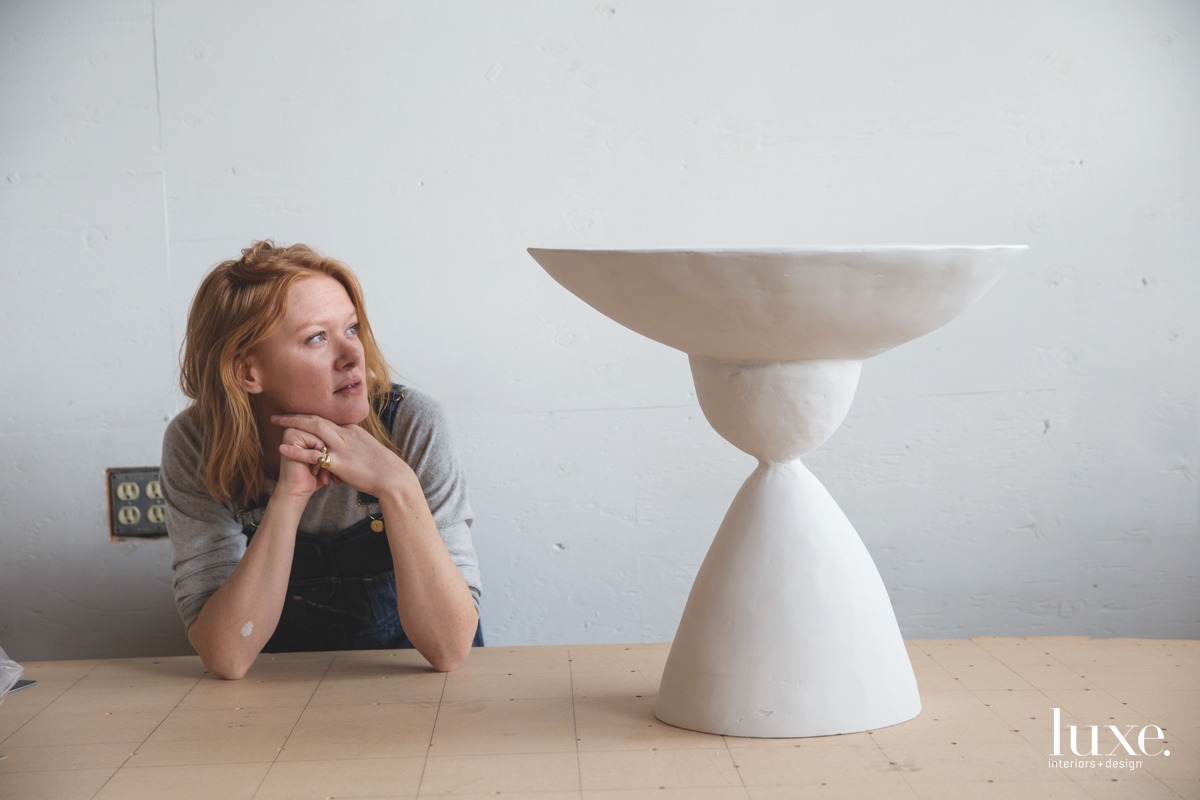 She has expanded her work to include sculptural tables.

She has expanded her work to include sculptural tables. 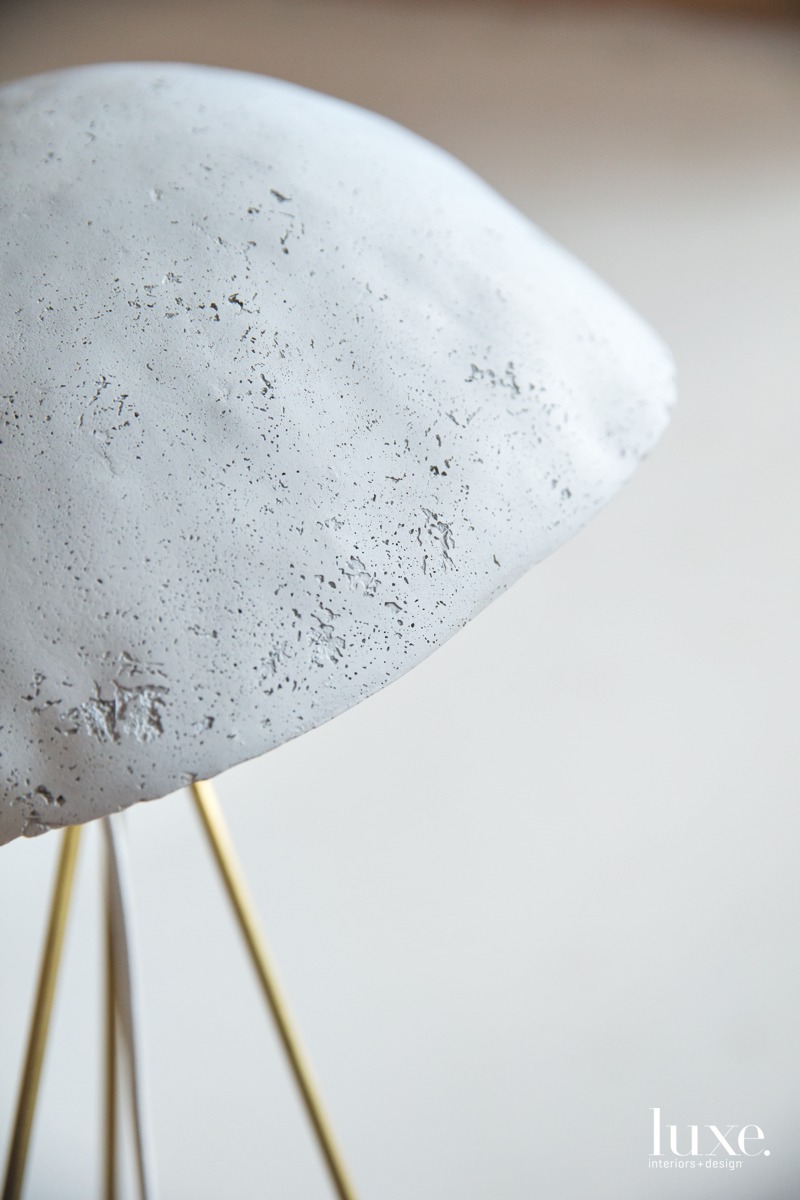 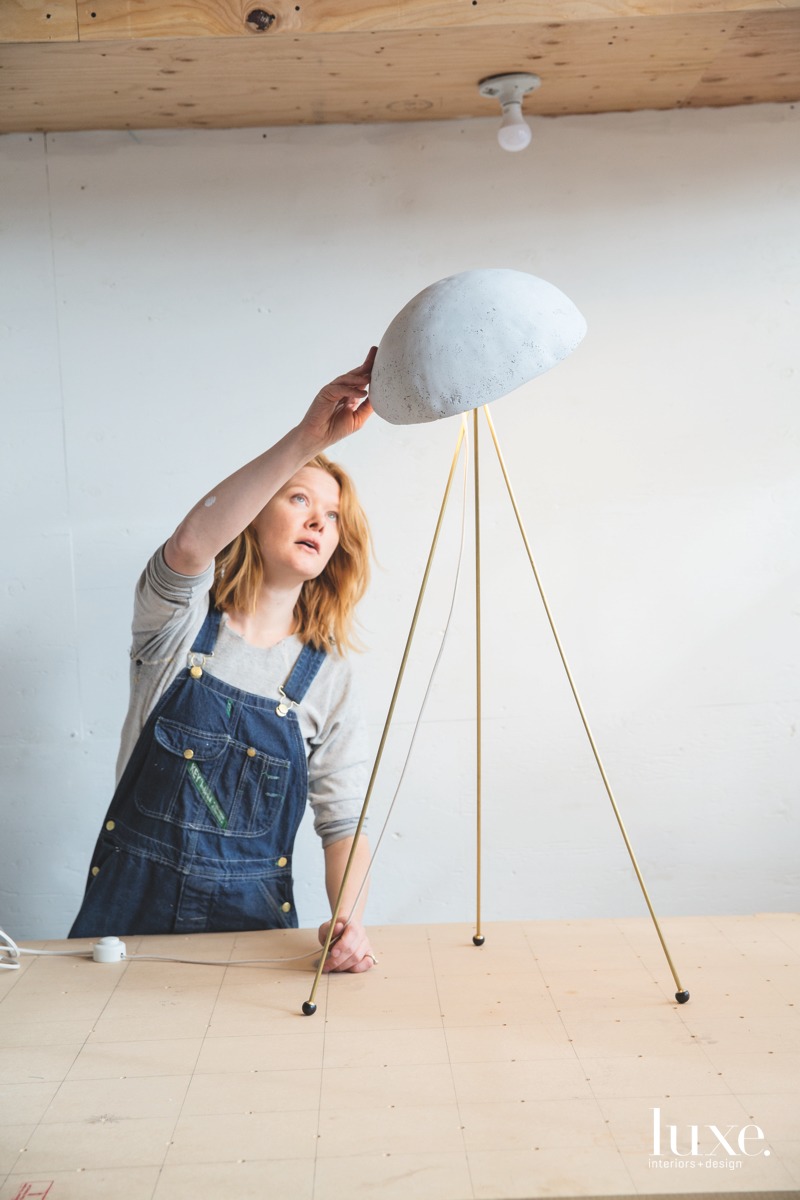 Rocks and other natural forms still resonate with and inspire her, but Parker also looks to the work of Faye Toogood and Max Lamb, sculptors such as Rachel Whiteread and Lee Ufan and photographers, including Karl Blossfeldt. She is also a devotee of kintsugi–the Japanese technique of repairing broken ceramics using two types of lacquer and gold powder. “The things that I spend a lot of time thinking about are retreat, stillness, solitude, silence, intimacy of touch, memory, time and aging,” she remarks, “and I get at those things through irregularities of form, imperfections, hand-carved textures, the way light moves across things and patina.”

From conception to birth, a design will typically take at least a year. “The motto in my head is that ‘form appears,’” Parker explains. “I’m just waiting until the shape is right, and when that happens, then I build molds in a way that causes each cast to be different from the next. If you get a lamp, that’s the only one that’s exactly like that.”

Parker will be participating at ICFF for the first time in May, showing new pieces along with some of her existing work. She is particularly excited about an item that she has yet to name–“a 5 1/2-foot-tall floor lamp with a rounded, bent, long plaster form with a hidden lighting track so the inside of it will glow,” she says. “It’s kind of a lonely piece–you look at it and wonder if it’s going to fall over.”

After the show, Parker is turning her attention to developing larger work–dining tables and dressers, more one-off pieces and more limited editions. A name change will also happen at ICFF, as she transitions from Parker Works into Blanche Jelly, a moniker that would feel at home in a Nabokov novel and actually belonged to, and honors, her great-grandmother. It’s in keeping with her planned move into more outre explorations. “My great-grandmother’s name is delightfully strange,” Parker says. “It’s bizarre. It makes me laugh when I say it, and it makes other people laugh. And what’s better than that?”