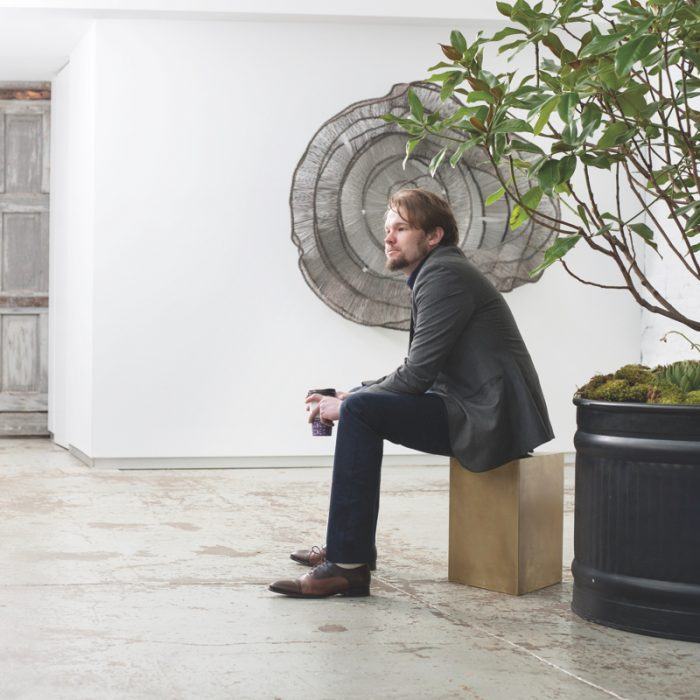 If the adage “one man’s trash is another man’s treasure” is true, then Eric Gushee would surely claim it as his motto. To create his large-scale sculptural installations, the Chicago-based artist harbors no shame in utilizing what others have disposed of–like 19 miles of rope, a recent Craigslist score. At his collaborative work space in East Garfield Park’s Stairway Studios, Gushee is surrounded by miscellaneous objects: aircraft cables, rebar ties, lint traps, fishing sinkers. “Every material is fair game,” he laughs. For Gushee, these seemingly mundane materials dictate form for his art. He explains: “I never start with blueprints or complicated schematics, because the finished product will always reveal itself through the process.”

Growing up in Manhattan, Gushee always had an interest in the arts and attended Marlboro College in Vermont for creative writing. But after a particularly compelling art-installation class, he fell in love with sculpture and went on to study the subject at Chicago’s Art Institute. Upon graduating, Gushee landed a job at a small local foundry called West Supply, where he crafted high-end bronze furniture for the likes of Holly Hunt. It was there that his seemingly animate work, characterized by strands of metal woven into organic, circular layers, was first noticed by Hunt’s team. The brand commissioned Gushee to create pieces for its various interiors showrooms, and the rest, as they say, is history: “I quit my job and became a full-time artist,” he says. 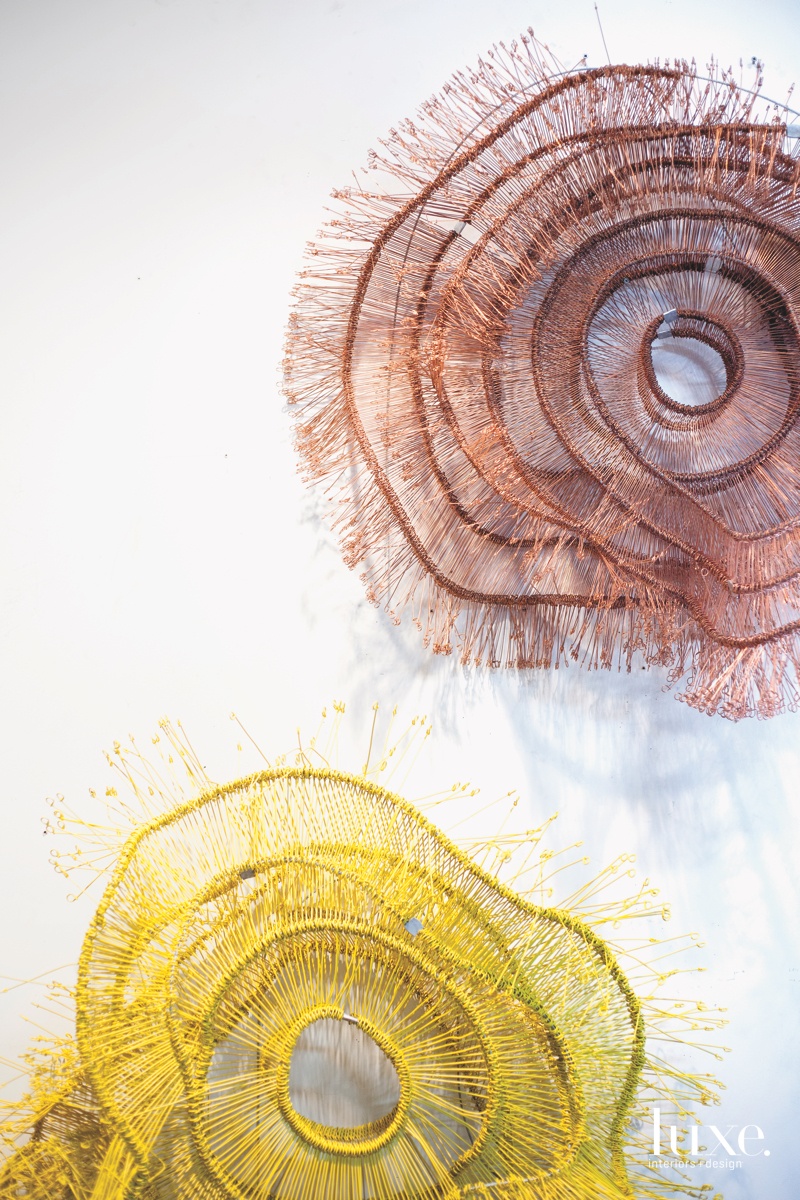 Pieces in the artist's Emergence Series.

Pieces in the artist's Emergence Series. 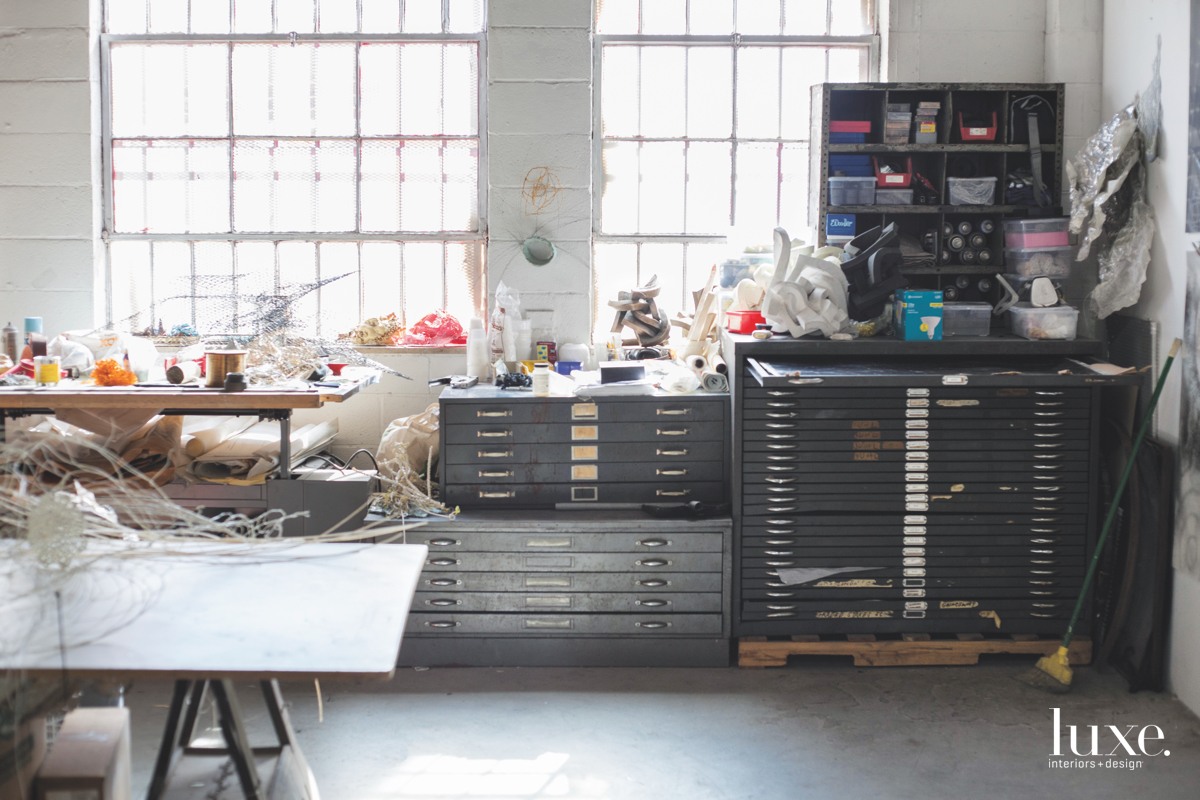 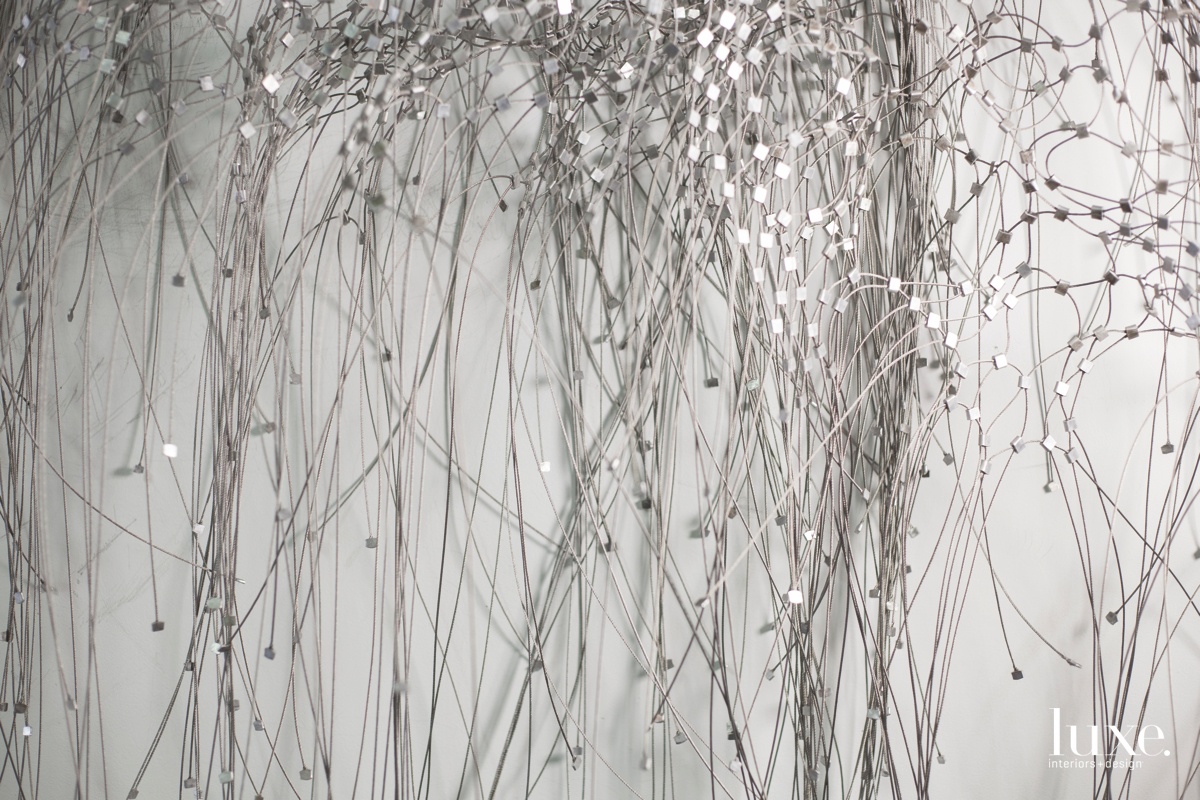 Gushee experiments with a range of unexpected materials, such as aluminum crimps and aircraft cable for pieces in his Topography Series.

Gushee experiments with a range of unexpected materials, such as aluminum crimps and aircraft cable for pieces in his Topography Series. 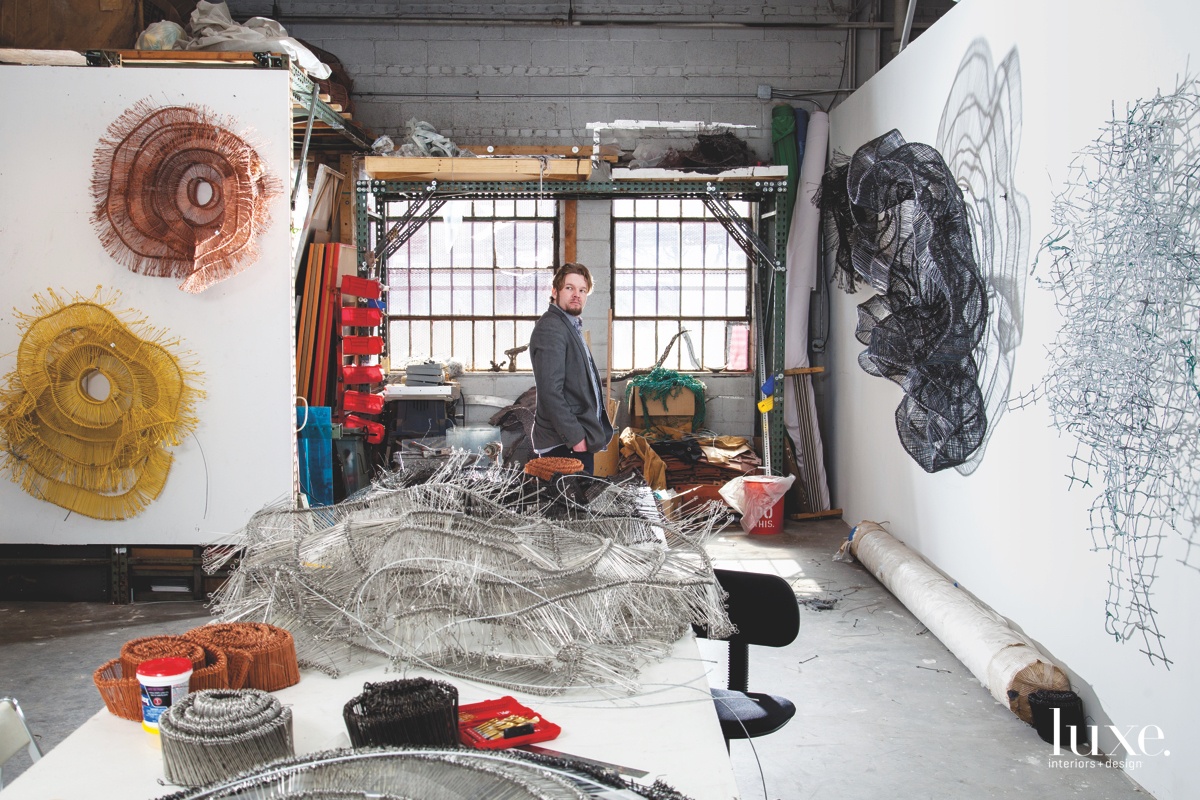 An in-progress work artist Eric Gushee is making with repurposed fishing nets hangs on the far-right side of his studio's right wall; the other hanging pieces are part of his Emergence Series. Sitting on the table are more materials he uses, such as rebar ties.

An in-progress work artist Eric Gushee is making with repurposed fishing nets hangs on the far-right side of his studio's right wall; the other hanging pieces are part of his Emergence Series. Sitting on the table are more materials he uses, such as rebar ties. 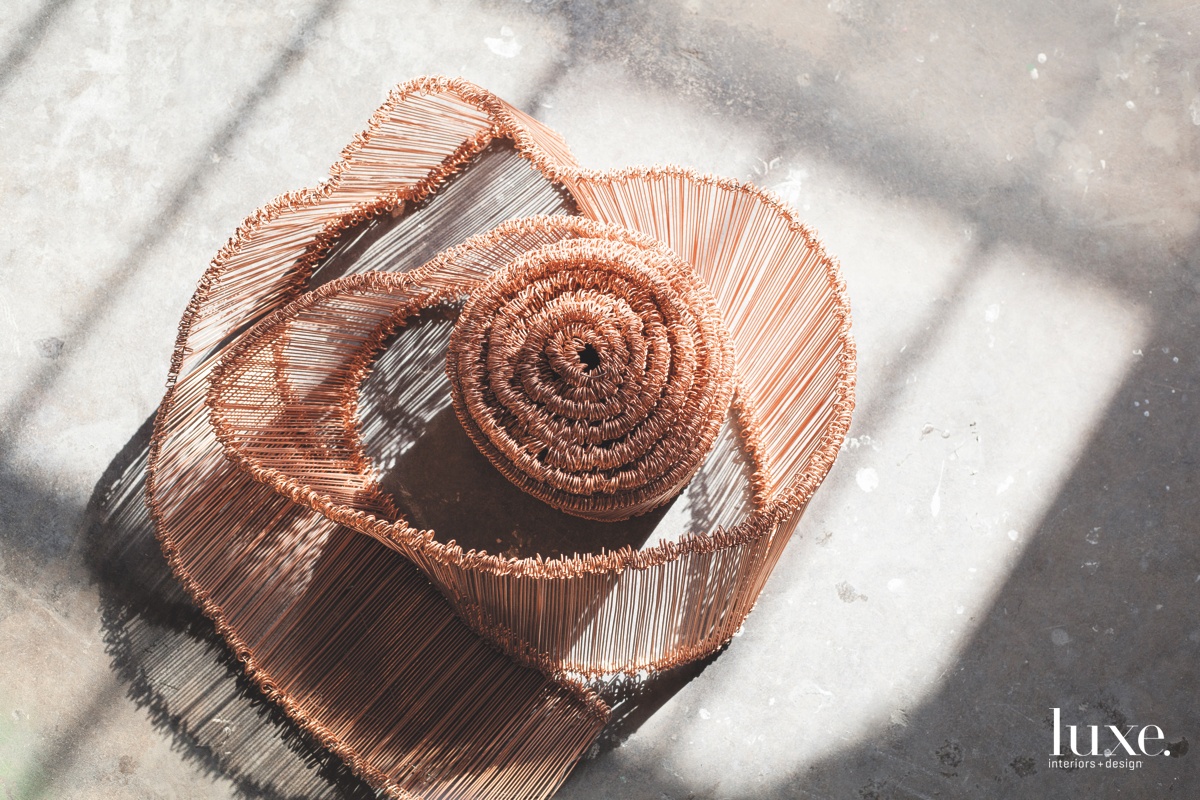 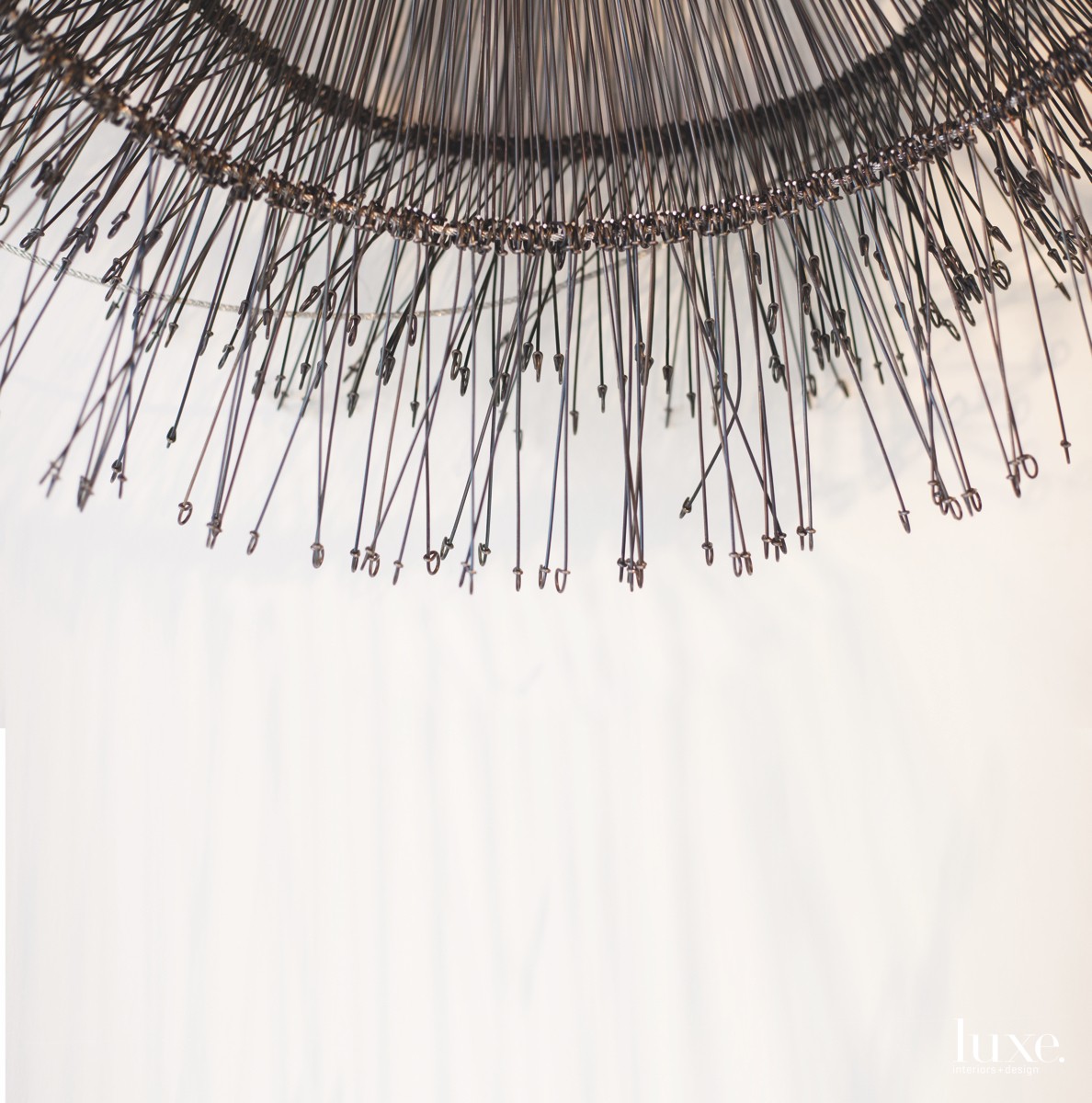 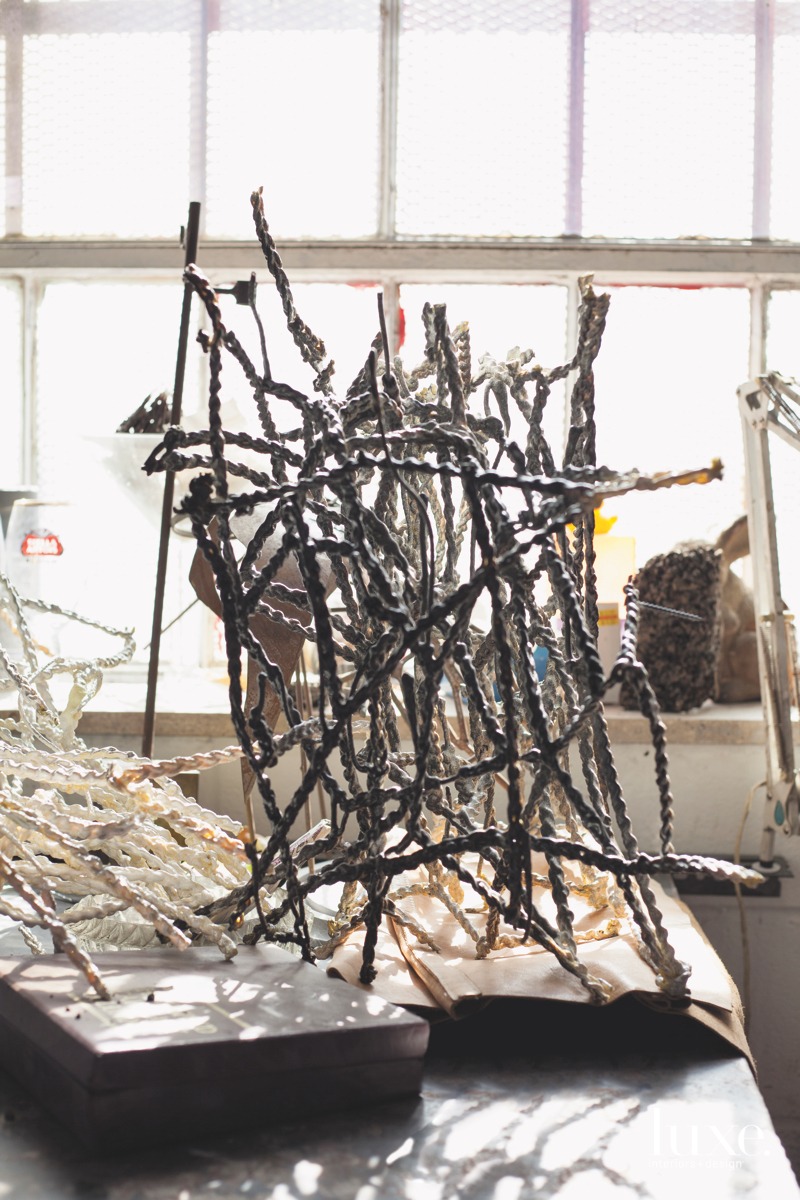 He also manipulates fibers, including weaving and stiffening rope.

He also manipulates fibers, including weaving and stiffening rope.

Those early pieces in Gushee’s artistic career became the first in his Emergence Series, the body of work for which he is most known.The collection, he describes, is a “rigorous dedication to the complex systems that arrive through the repetition of a single act or gesture.” The concept behind this series is in its scientific namesake: emergence theory, the notion that a simple set of rules dictates a result. It is this idea that steadily informs the artist’s expansive, ever-growing portfolio.

Often described as organic, Gushee’s sculptures are further influenced by the artist’s vast collection of doilies and lace, which he uses as an inspiration library for manipulating his works. “My practice is an interpretation and distortion of traditional fiber techniques,” he explains. “It is a reference to the discipline of the craft.” In one of his pieces, wild hair-like brass wires and knitted strands of stainless steel are tangled together. As part of his Topography Series, meanwhile, untamed strands of aircraft cable are barely held together by bead-like aluminum crimps. Recently, he used leftover scraps of metal from his Emergence Series to fashion the large billowing shapes of his Exhalation Series–which, at first glance, recalls threads of fine spun glass. In some of his more explorative work, these fibrous materials interact with Gushee’s own sketches and paintings on the surface of a canvas.

“Every day, I get the chance to experiment with new materials and their relationship to one another, constantly testing their limitations and boundaries to find new forms,” Gushee says. “It is this physicality of art via materiality, and the endless vocabulary the world gives us, that motivates me.”