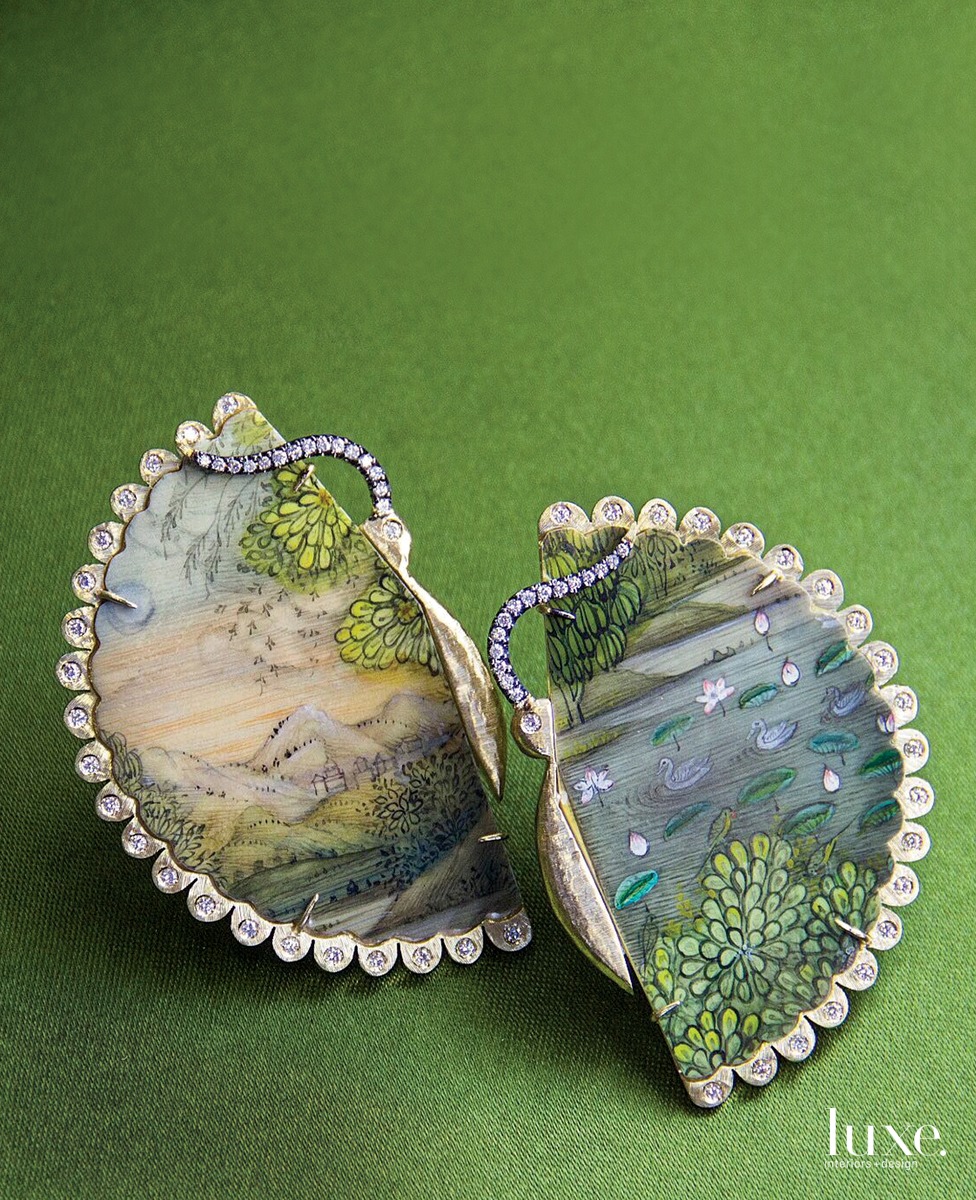 Detail-oriented: Intricate painted scenes are rendered in miniature on these earrings from Silvia Furmanovich’s India Collection, which was inspired by the centuries-old artisan traditions of Rajasthan.

Three standouts from the design and fashion worlds muse on the role travel plays in their discovery process, proving that even on vacation the creative mind never rests. 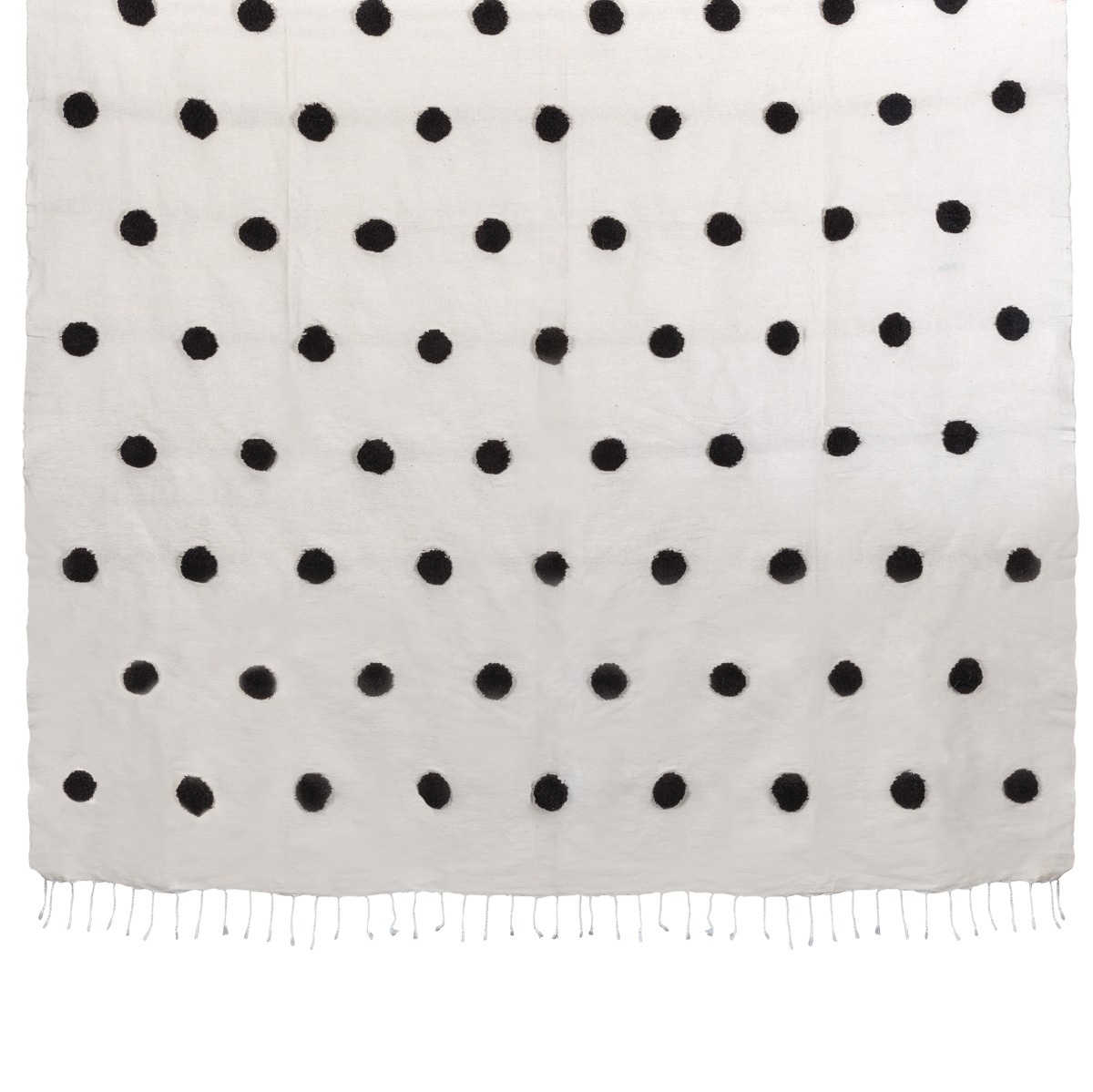 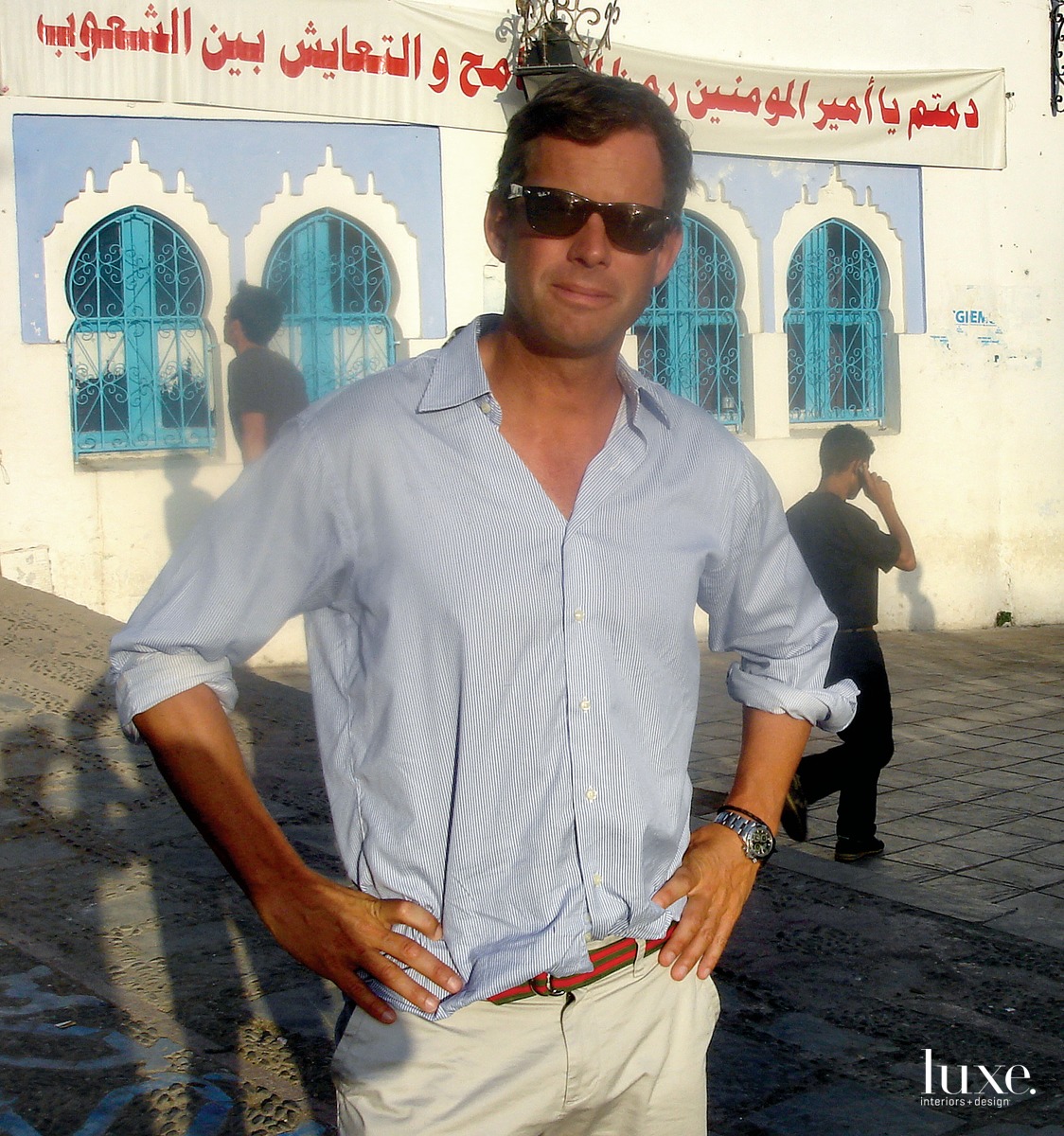 Owner of Creel and Gow

If you’re on the hunt for high-end conversation starters in the interior design world, few places satisfy quite like Creel and Gow in New York. The Upper East Side boutique has long been a destination for the style set seeking curious objets, such as a taxidermy albino peacock or a model of the Royal Brighton Pavilion made of matchsticks. These intriguing ﬁnds are often the fruits of extensive travels by Paris-based owner Jamie Creel. “Exploration is crucial to finding new inspiration,” says Creel. “I think most of my best ideas come when I’m on holiday.”

To recharge, Creel heads to his house in Tangier. One of the oldest riads in the bustling Moroccan port city, it is where British naval administrator and parliamentarian Samuel Pepys wrote one of his many diaries over 300 years ago. Creel bought the property from American interior design icon Charles Sevigny 10 years ago. “The home is located at the highest point of the old city,” says Creel. “My favorite space to relax is a canvas-covered terrace that overlooks the Strait of Gibraltar.”

When Creel ventures out, he strolls the medina in search of treasures for his shop. “Wandering through the narrow, almost medieval streets is like taking a trip back in time,” he says. “The beautiful thing about Morocco is that if you have an idea for something, there is usually a skilled craftsperson nearby who can make it.” Recently, he commissioned a metalworker to create brass lamps and a textile maker to weave pom-pom bedspreads for the shop.

It’s hardly surprising that a place with so many artisans would attract creative types. “With its grittiness and authenticity, Tangier has always been a magnet for artists, writers and actors,” says Creel. “I think there must be more decorators with second homes here than any other place in the world.” 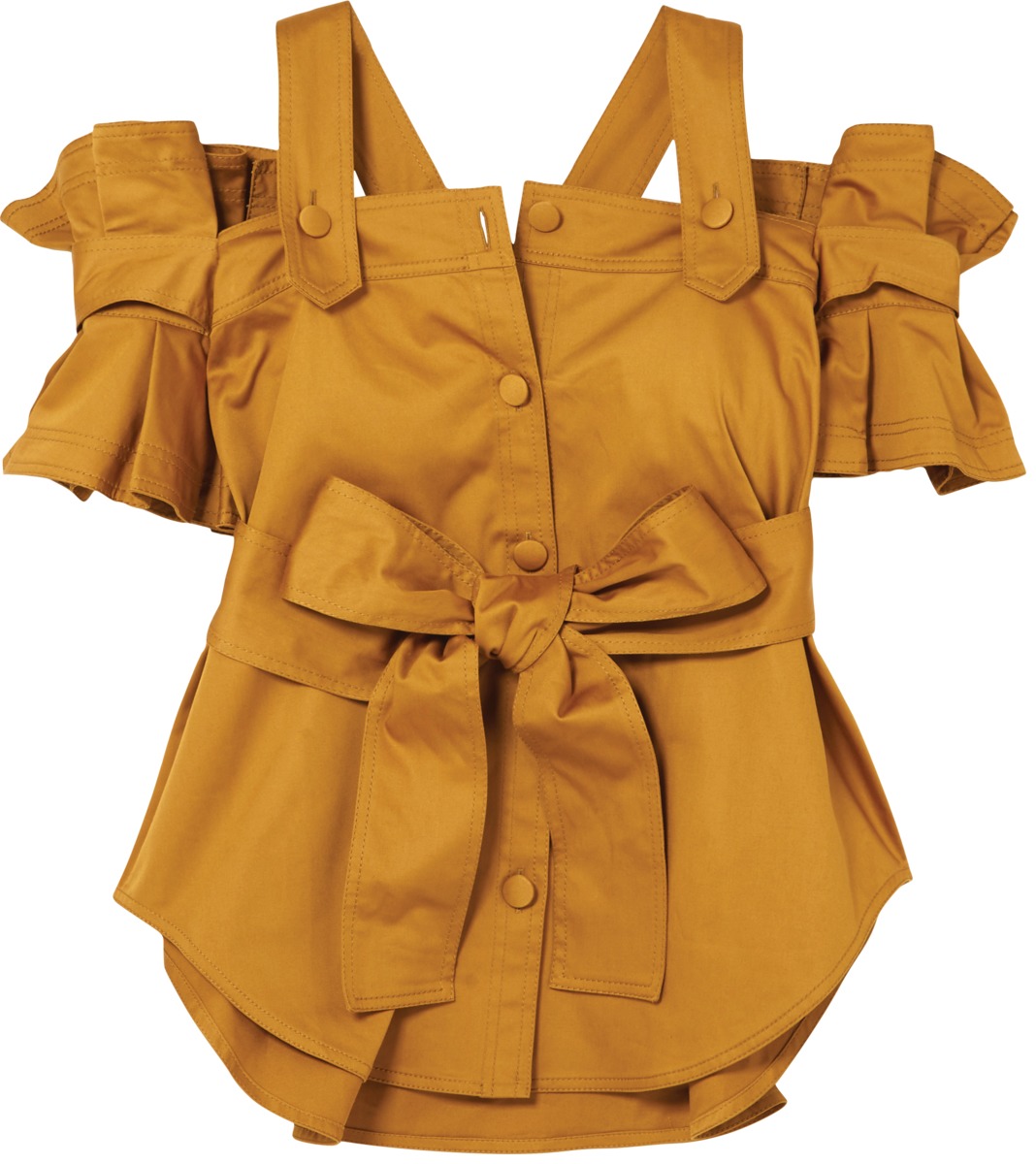 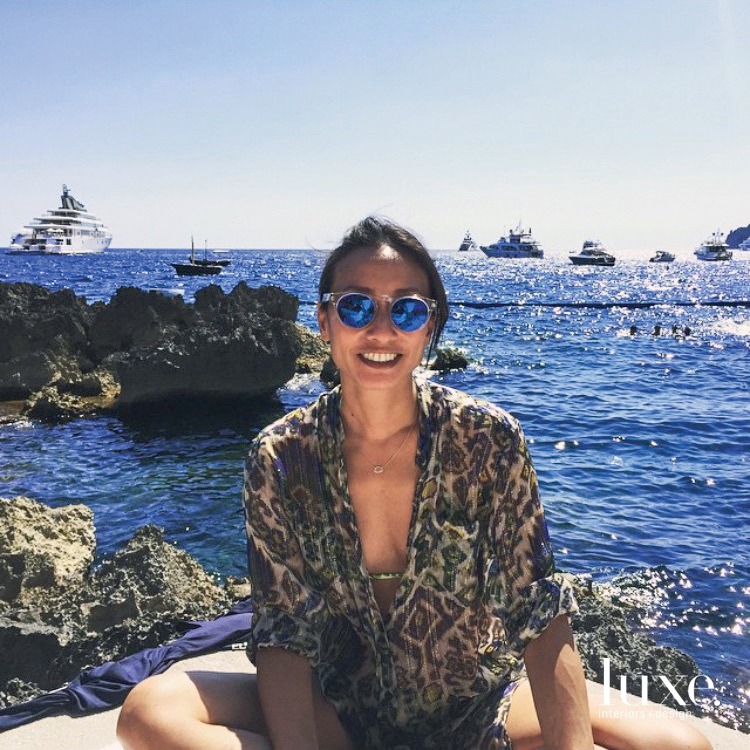 As global buying director of London-based e-tailer Neta-Porter, Elizabeth von der Goltz searches the world for the latest luxury fashion ﬁnds. “From a purely work perspective, we cover as much as we can globally. We’re in all the major cities for the fashion weeks, and other markets, such as Sydney; Seoul, South Korea; Copenhagen, Denmark and Tbilisi, Georgia,” she says.

One scroll through her Instagram feed and you’ll see edgy-glam street-style shots from those scouting trips, as well as a running travelogue of von der Goltz’s sun-saturated pleasure destinations. “The fashion world is so visual. There’s so much stimulation all the time that sometimes you need to just clear your mind, and go hiking or meditate,” she says. One of the places von der Goltz escapes to is Thailand. “I love the energy of Bangkok. The Buddhist people have this lovely warmth and spirituality. You can relax on a lazy boat ride down a river or go to a ramshackle, chaotic open marketyou see things you don’t see anywhere else.”

It’s that promise of a rare ﬁnd that makes it hard for von der Goltz to shut oﬀ her buyer’s brain. “I’m constantly seeking out the obscure sandal maker or an undiscovered designer. Even when I’m on vacation, the wheels are still turning,” she says. 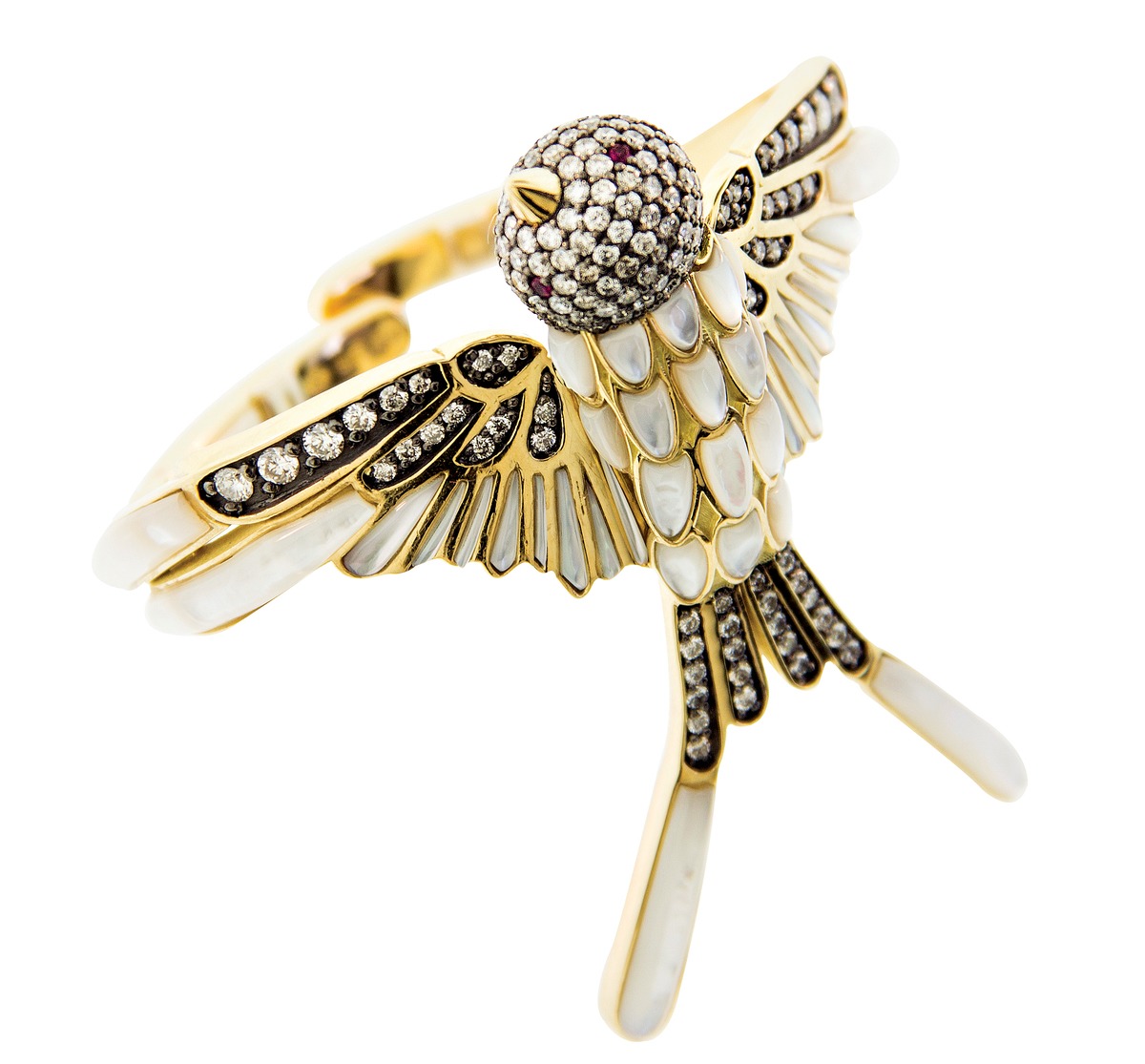 A bird-like bracelet made of diamonds, rubies and mother-of-pearl from Silvia Furmanovich’s India Collection, available at Bergdorf Goodman. 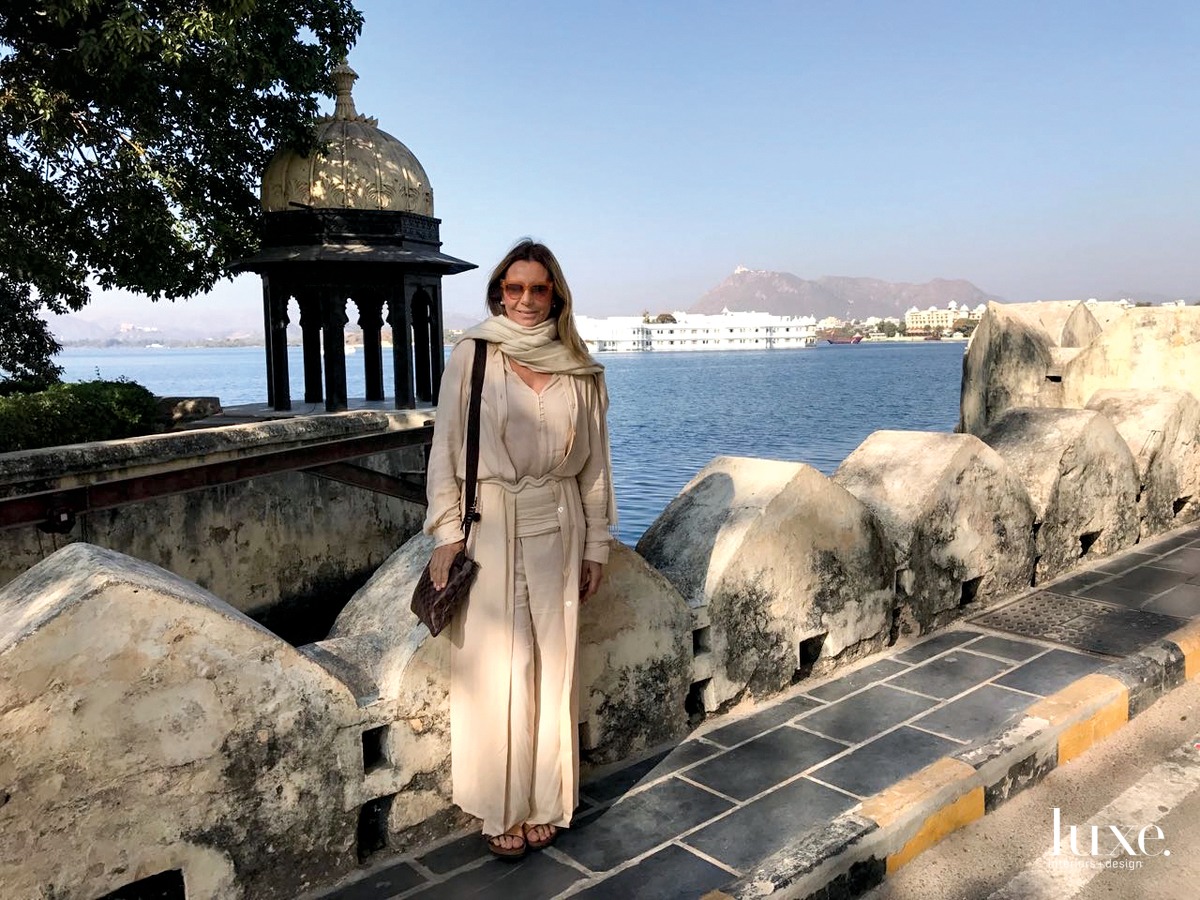 Two years ago, Brazilian jewelry designer Silvia Furmanovich saw an exhibition at The Metropolitan Museum of Art that stuck with her. “Divine Pleasures: Painting from India’s Rajput Courts” assembled a vast anthology of opaque watercolors commissioned by the royal courts of Rajasthan and the Punjab Hills between the 16 th and 19 th centuries. Not only did the paintings’ depictions of exotic myths and legends capture her imagination, but so too did the artists’ technique, which showed an astounding attention to minute detail. Not long after that, she embarked on a 40-day trip to India to explore the country’s art and culture ﬁrsthand.

“India is the most incredible place, especially Rajasthan, where the colors and decorative embellishments were unlike anything I’d ever experienced,” says Furmanovich. “In terms of architecture, Mughal and Oriental inﬂuences mix together, creating layers of rich ornamentation, so your eye never rests. From inlaid marble patterns to carpet designs, there are ideas on every surface.”

As she explored the country’s decorative arts traditions, she began to formulate ideas for her latest line of jewelry. The result: Breathtaking tableaux are hand-painted in miniature on a single earring, and flowering vines rendered in wood marquetry adorn evening clutches. Rudraksha seeds, used as prayer beads and temple offerings, become organic statement earrings while inlaid gemstones create delicate scenes on many of the pieces.

“If it weren’t for travel, this India Collection would not exist,” says Furmanovich. “Also, if I didn’t go anywhere, I wouldn’t have such interesting stories to tell!”