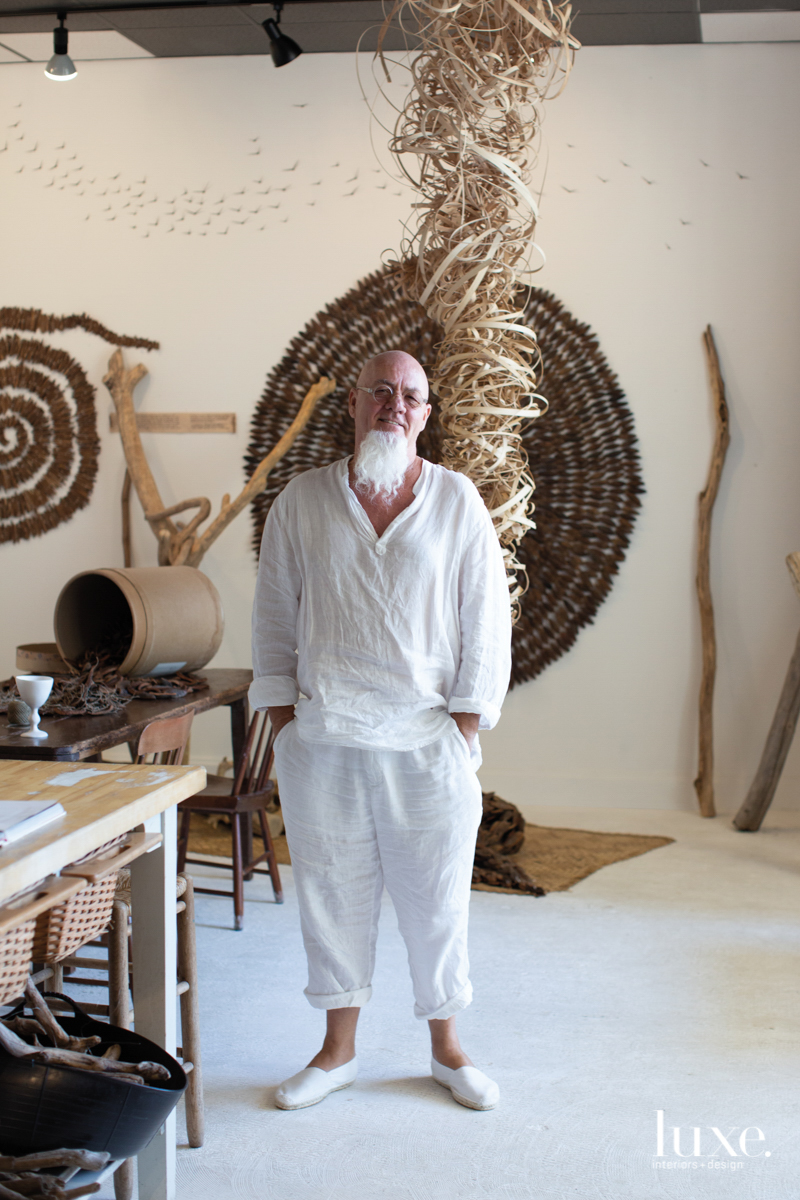 Assemblage artist Ran Adler’s work is the physical manifestation of a deeply personal philosophical and spiritual practice. Dipping into a cache of natural materials gathered on daily wanderings and annual road trips, he creates large wall hangings and installations that form an energetic link between his St. Louis childhood and his chosen home in Naples, Florida.

Adler’s foray into assemblage art began when he opened his first floral studio while living in Kansas City, Missouri. Over the course of the next 25 years, he opened several studios in St. Louis and, eventually, Naples, and he started experimenting with drying materials and weaving them together. This process now forms the basis for much of his current work. 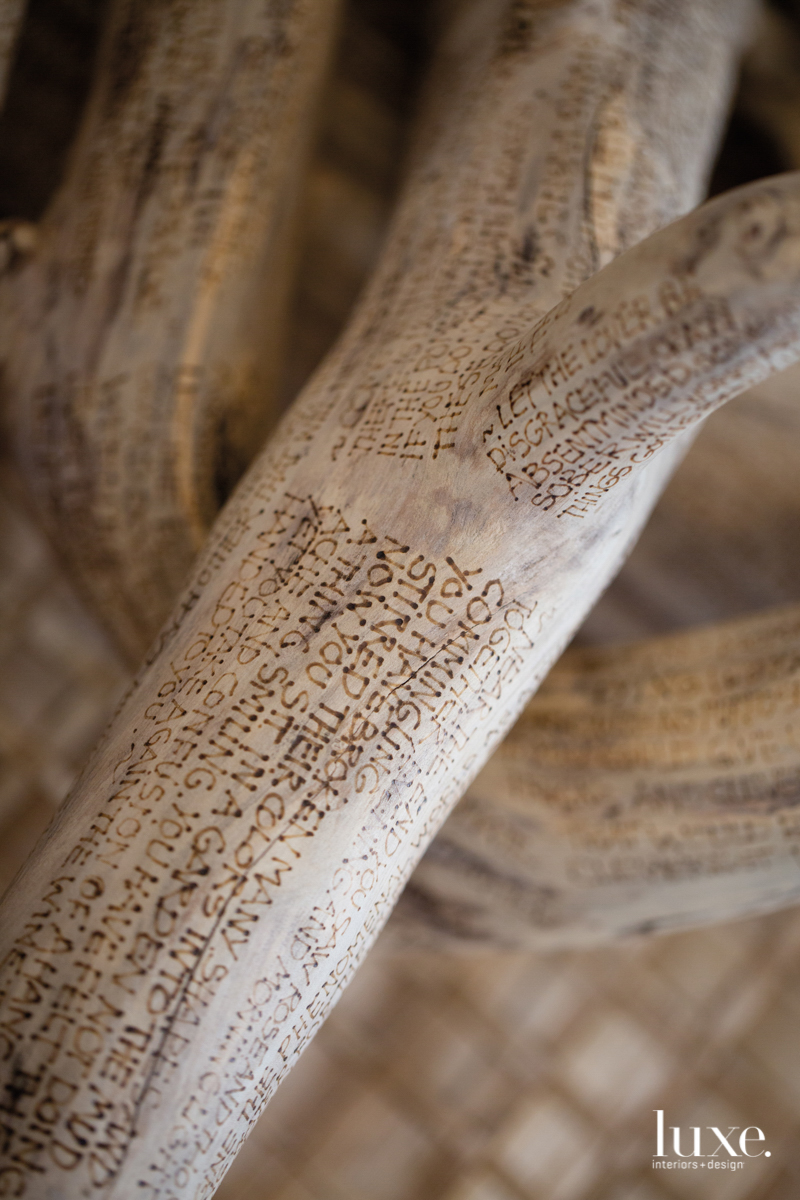 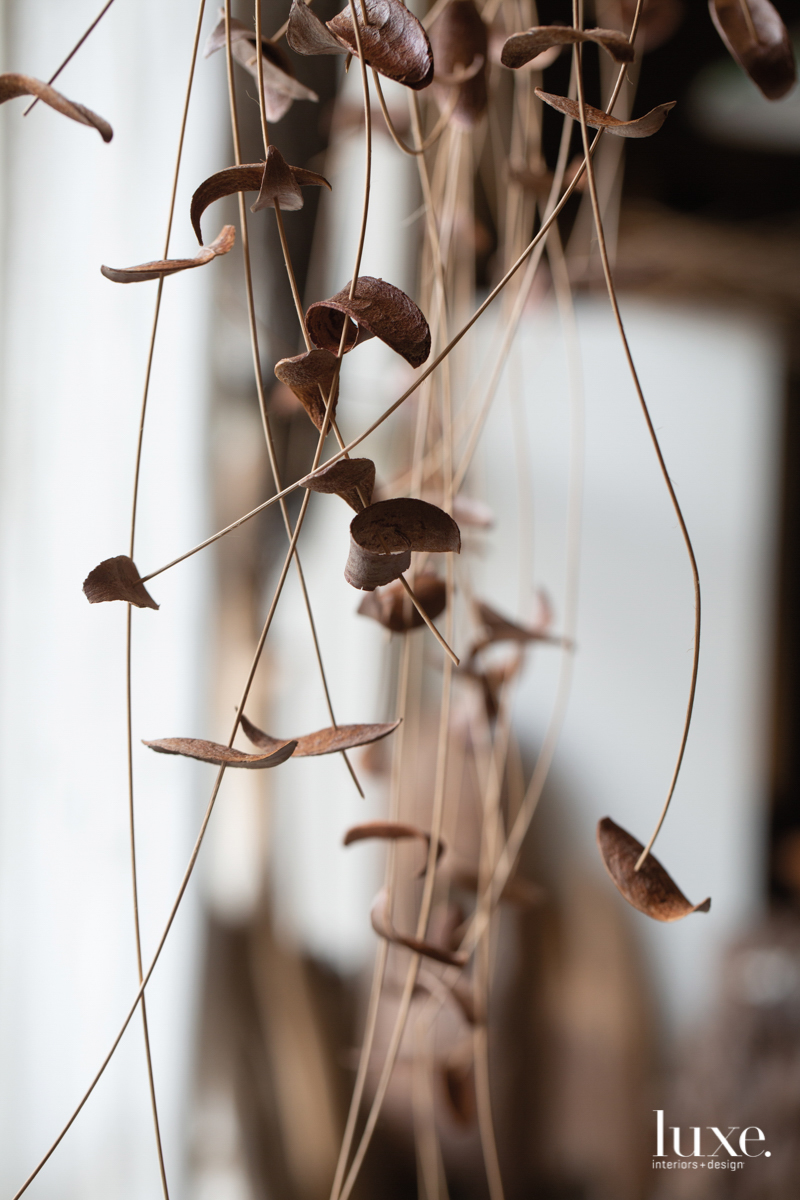 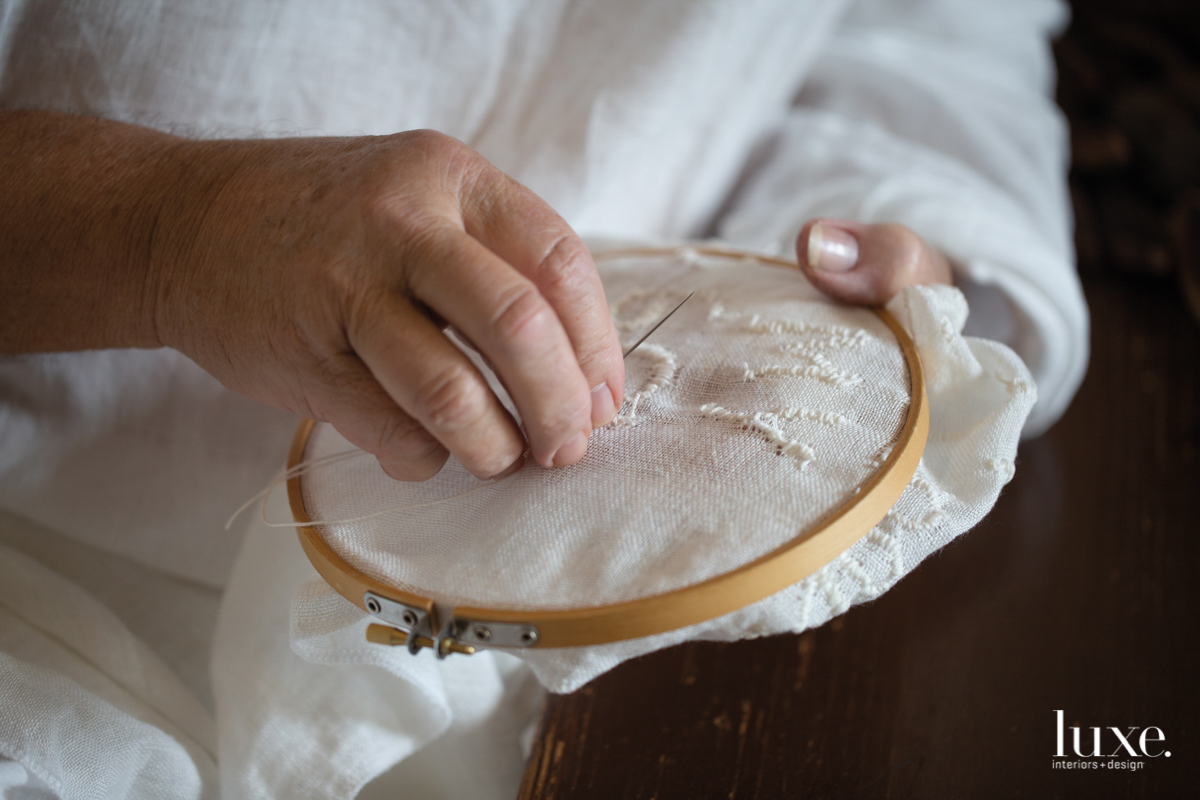 Ran Adler works with several materials, including needle and thread.

Ran Adler works with several materials, including needle and thread. 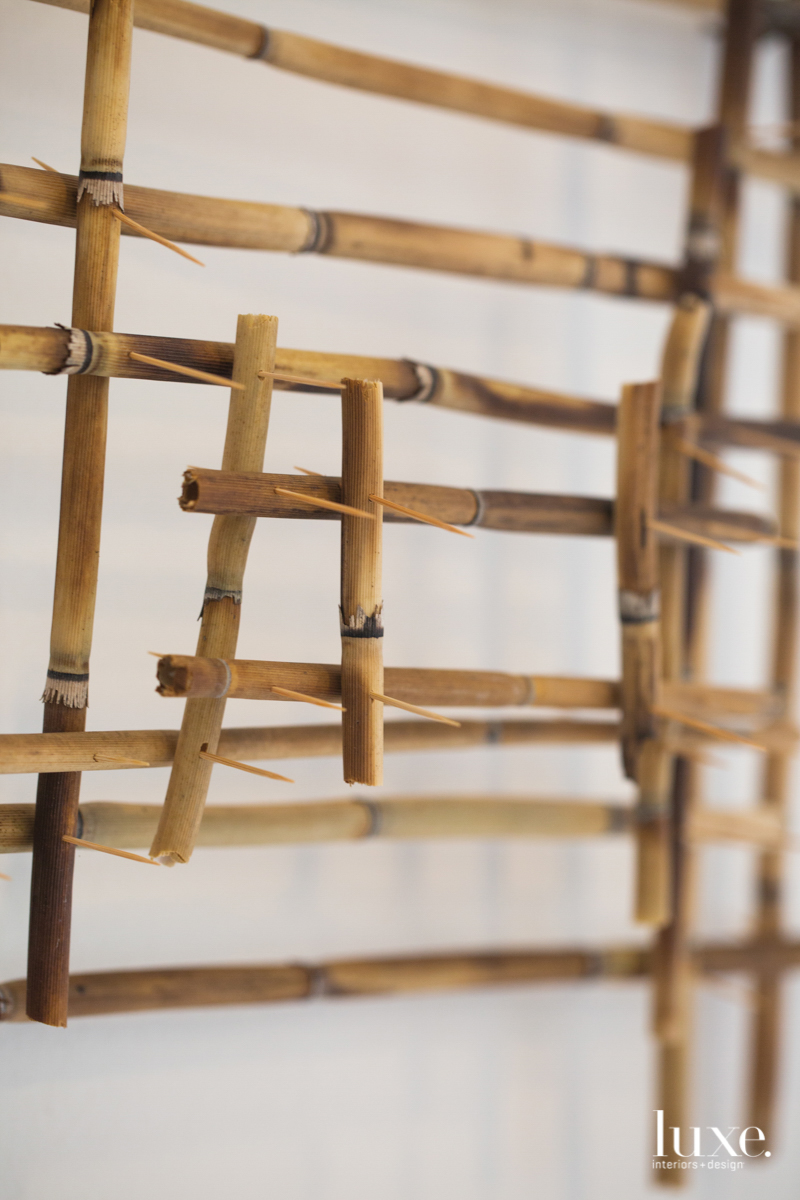 Other materials used include horsetail rush.

Other materials used include horsetail rush. 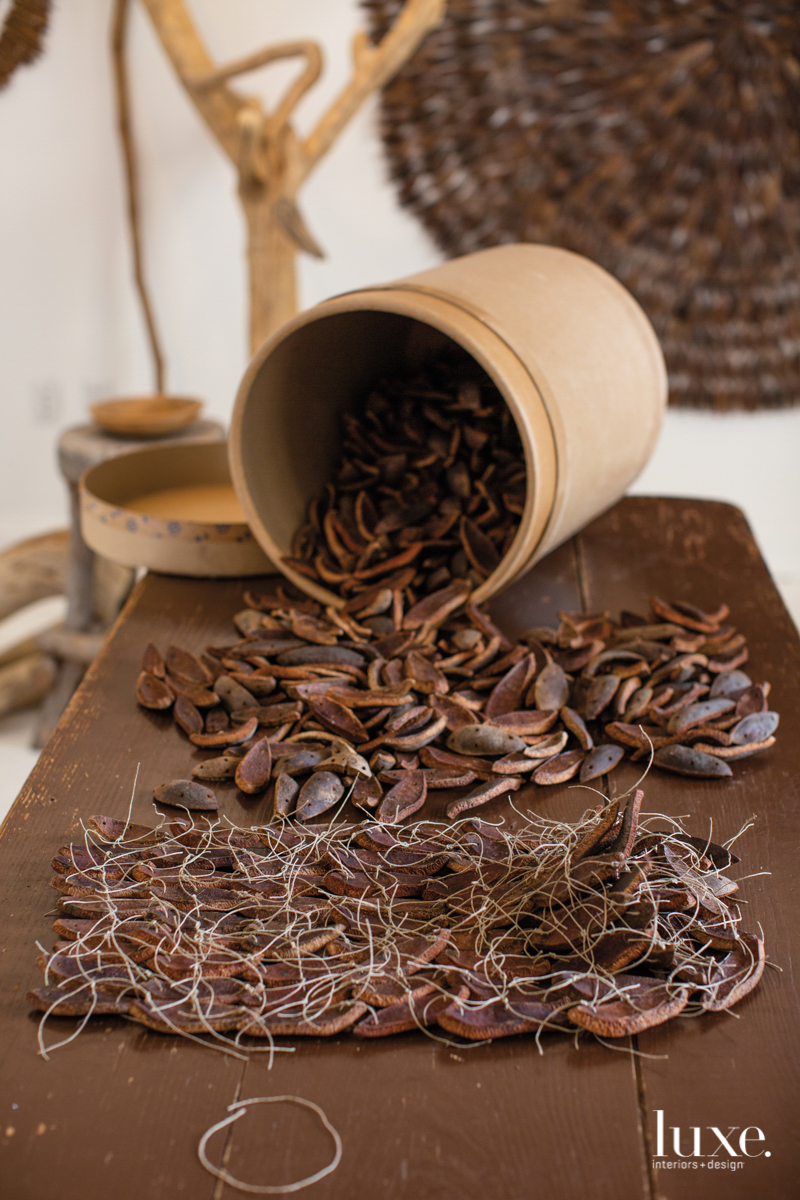 Ran Adler uses dried mahogany pods among others for his materials.

Ran Adler uses dried mahogany pods among others for his materials. 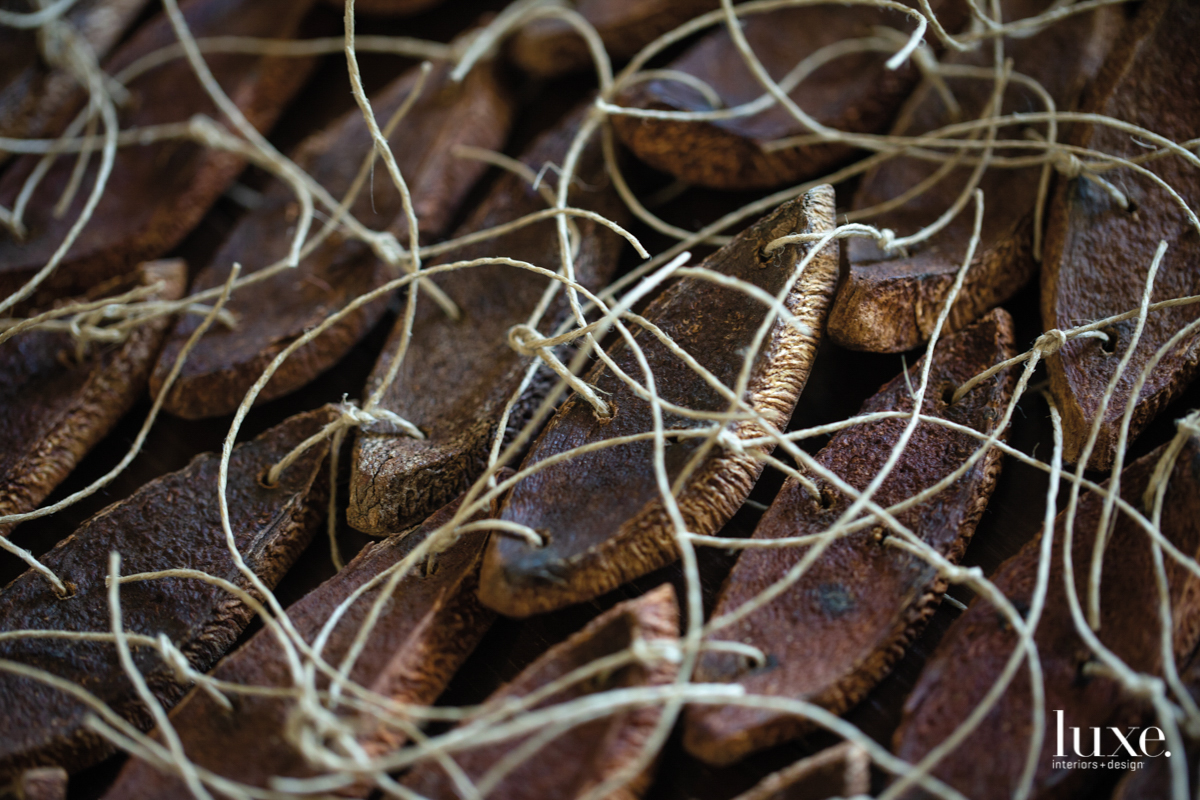 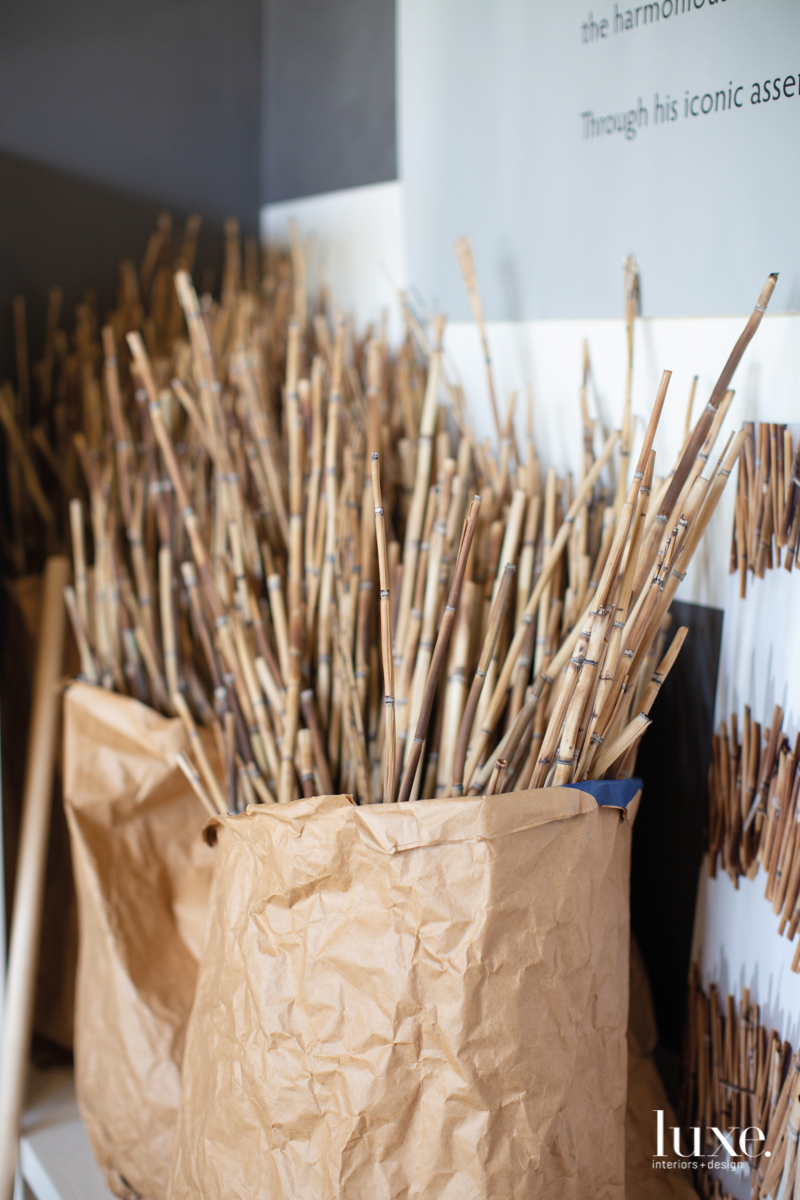 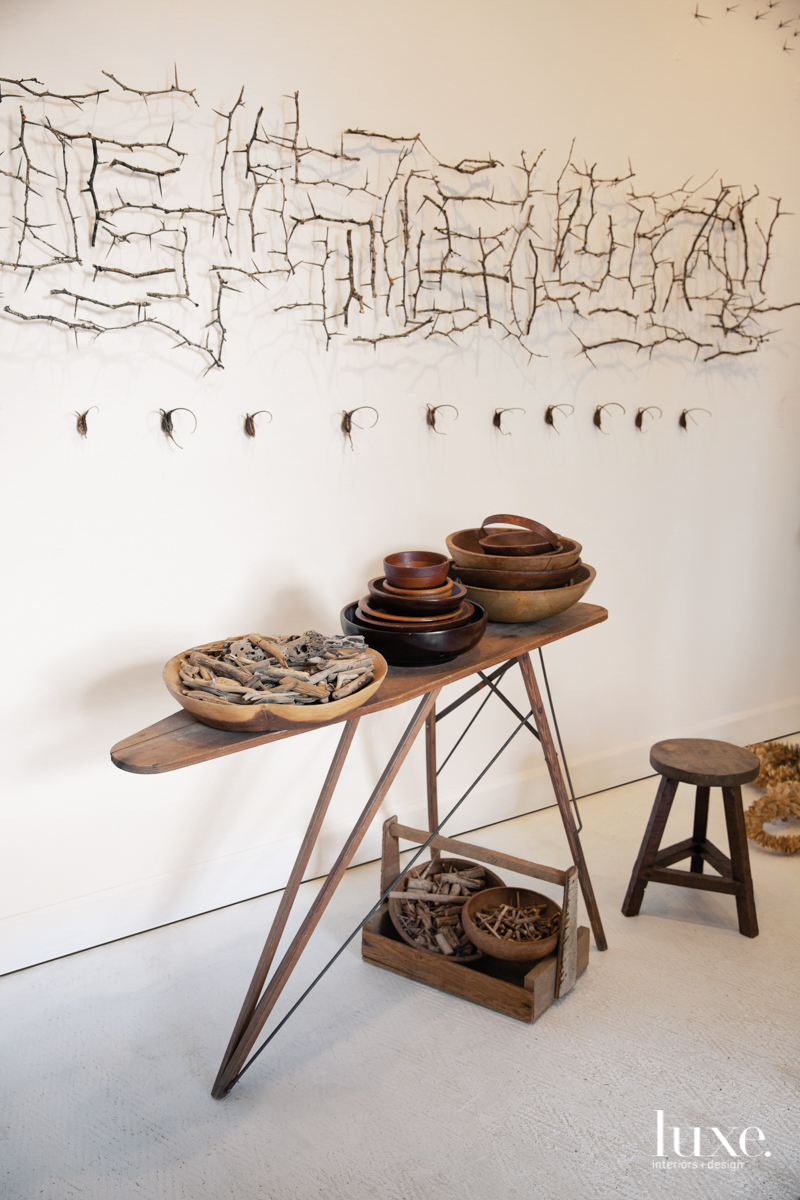 With its white walls and influx of natural light, Adler’s minimalist sun porch studio has given his work a meditative quality.

With its white walls and influx of natural light, Adler’s minimalist sun porch studio has given his work a meditative quality.

Among the many natural materials Adler transforms into works of art is the horsetail rush he collects on trips to St. Louis. He uses wire to thread together the delicate segments to fashion bristly spirals and dangling, vegetal strands. Locally, he also gathers sea grapes, which, once dried, are punctured and strung together like rusty prayer beads before being combined in loose, woven structures that shift with gravity and time. And, drawing inspiration from Ghanaian artist El Anatsui, Adler drills holes in piles of mahogany pods before linking them with wire to form draped, undulating shapes evocative of bark, coral or lichen. “I’m taking something out of the agricultural pile and giving it another story,” he says.

The transformative power of narrative resonates with Adler on a personal level. “I’ve been a lot of people. I’ve lived in a lot of places,” he says. “But in this last chapter of my life, I’ve become the person I’ve always aspired to be.” In the past 15 years, Adler has methodically created a new pattern of existence focused on “the good things.” After selling or giving away most of his possessions, he moved into a small bungalow with a sun porch studio. White floors and walls provide a distraction-free space where he works on one piece at a time. “It wasn’t until I started to really concentrate on my work that I realized I was meditating,” he says.

This satisfying combination of reverie and action fueled Adler’s next artistic urge: to copy the writings of Persian poet Rumi. A felled orange tree formed his first blank slate and a wood burner became his quill. He continued to make smaller pieces using bits of hurricane-damaged fruit trees and driftwood scavenged from the banks of the Mississippi. More recently, Adler has been consumed with the work of Japanese poet Ryōkan. Indulging in a bit of playacting, he stitches the words in white-on-white linen, imagining himself as a poet so desperate to be heard that he sacrifices his own garments.

These stitched pieces, as well as many large creations representing all the materials he works with, will be showcased in January in his solo exhibition at Wasmer Art Gallery, the culmination of having spent the fall semester as artist in residence at Florida Gulf Coast University. This show, along with serving as the resident artist for designer Judith Liegeois, reflects the bounty of Adler’s intentional life. In celebration, he’s making an embroidered shawl. “I’m just going to wear these words: ‘compassion’ and ‘kindness’ and ‘empathy,’ all the things I want to be wrapped in,” he says. “It’s another way of expressing the moment.”