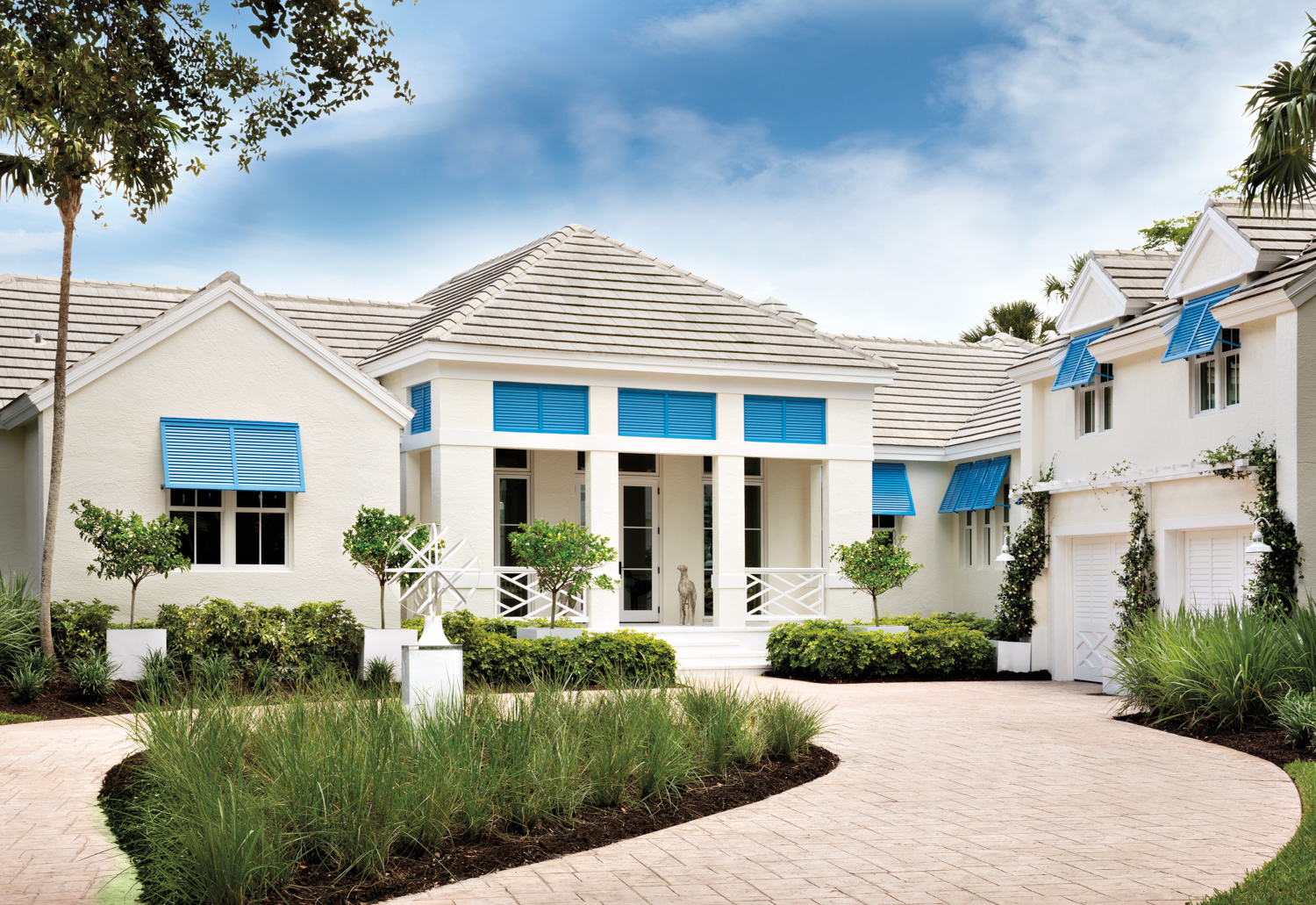 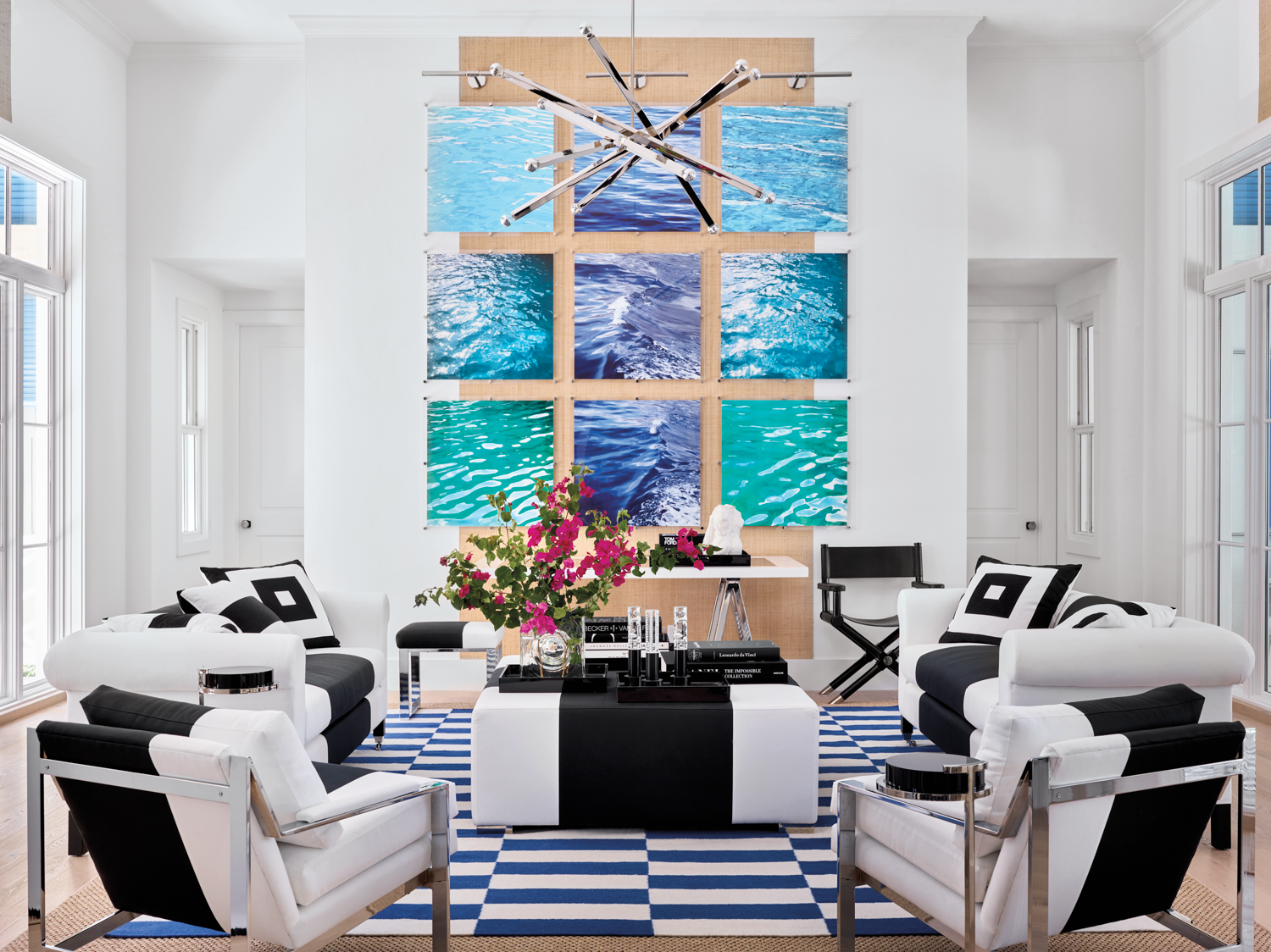 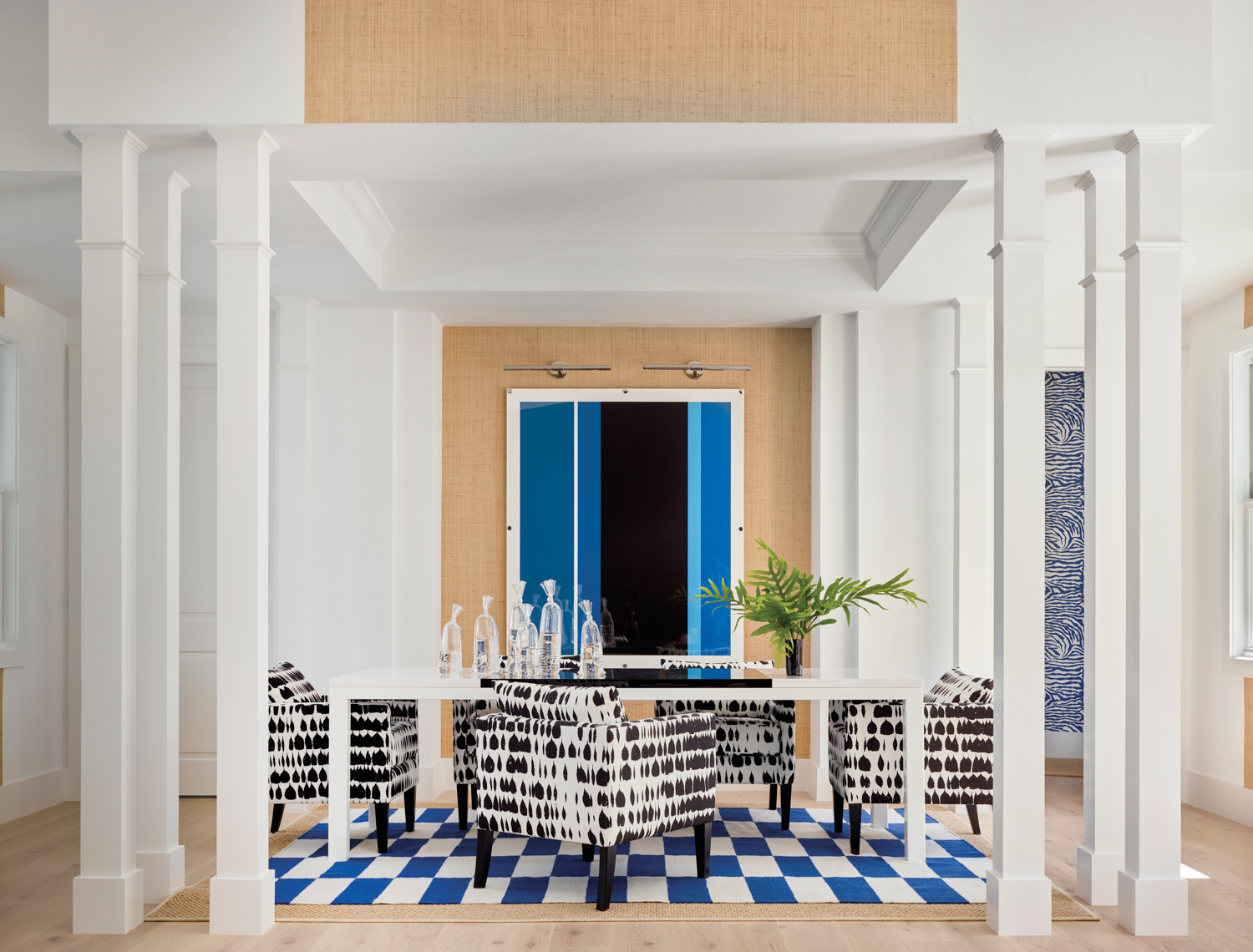 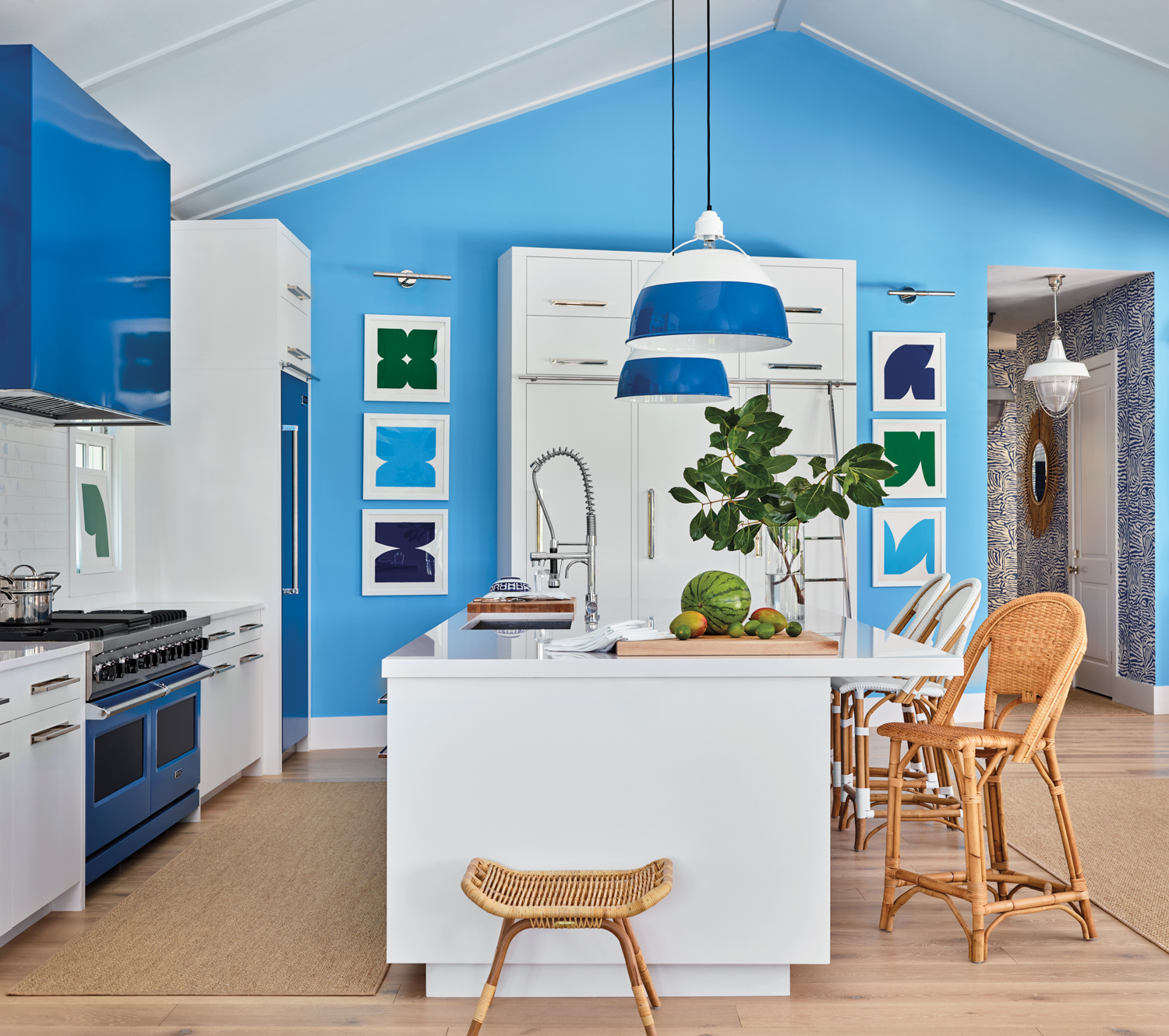 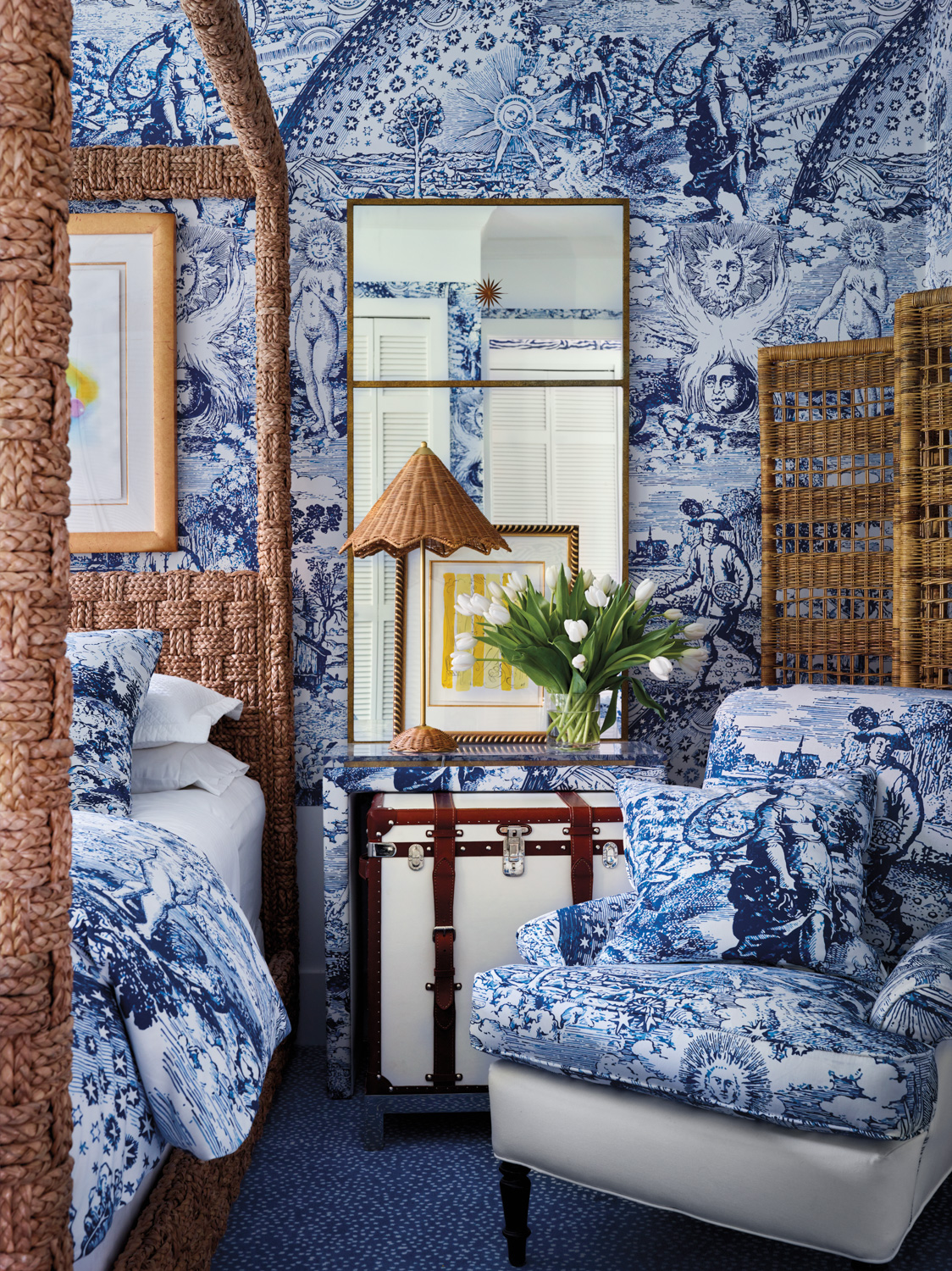 Winters employed Schumacher’s Modern Toile pattern throughout a guest bedroom, including on the walls, bedding on the Williams-Sonoma Home bed and waterfall table, which stores a Ralph Lauren Home trunk. The armchair and screen are from 1stdibs. An Arteriors lamp fronts an Oly Studio mirror, while Howard Lamar artworks add a touch of yellow.

Winters employed Schumacher’s Modern Toile pattern throughout a guest bedroom, including on the walls, bedding on the Williams-Sonoma Home bed and waterfall table, which stores a Ralph Lauren Home trunk. The armchair and screen are from 1stdibs. An Arteriors lamp fronts an Oly Studio mirror, while Howard Lamar artworks add a touch of yellow. 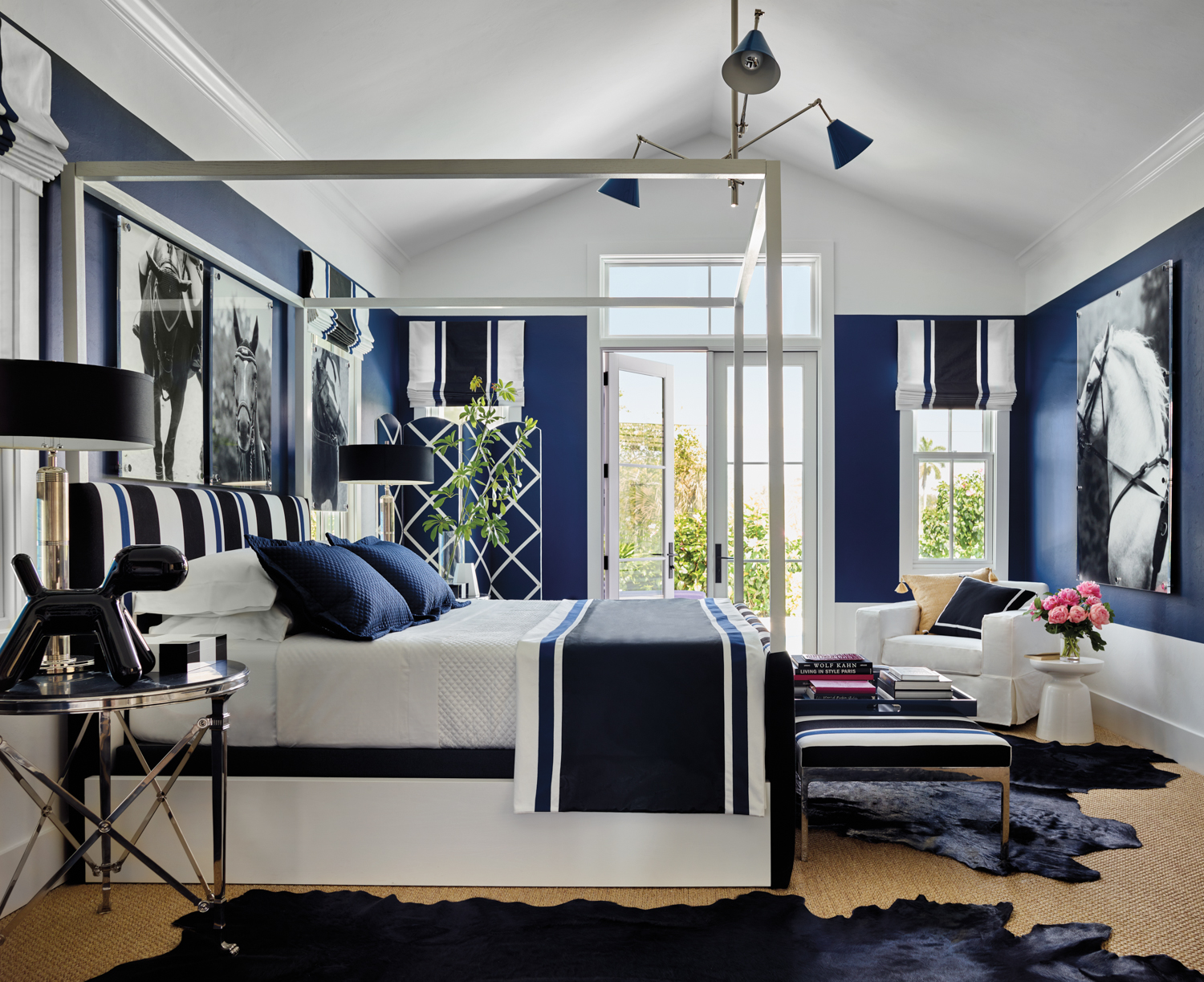 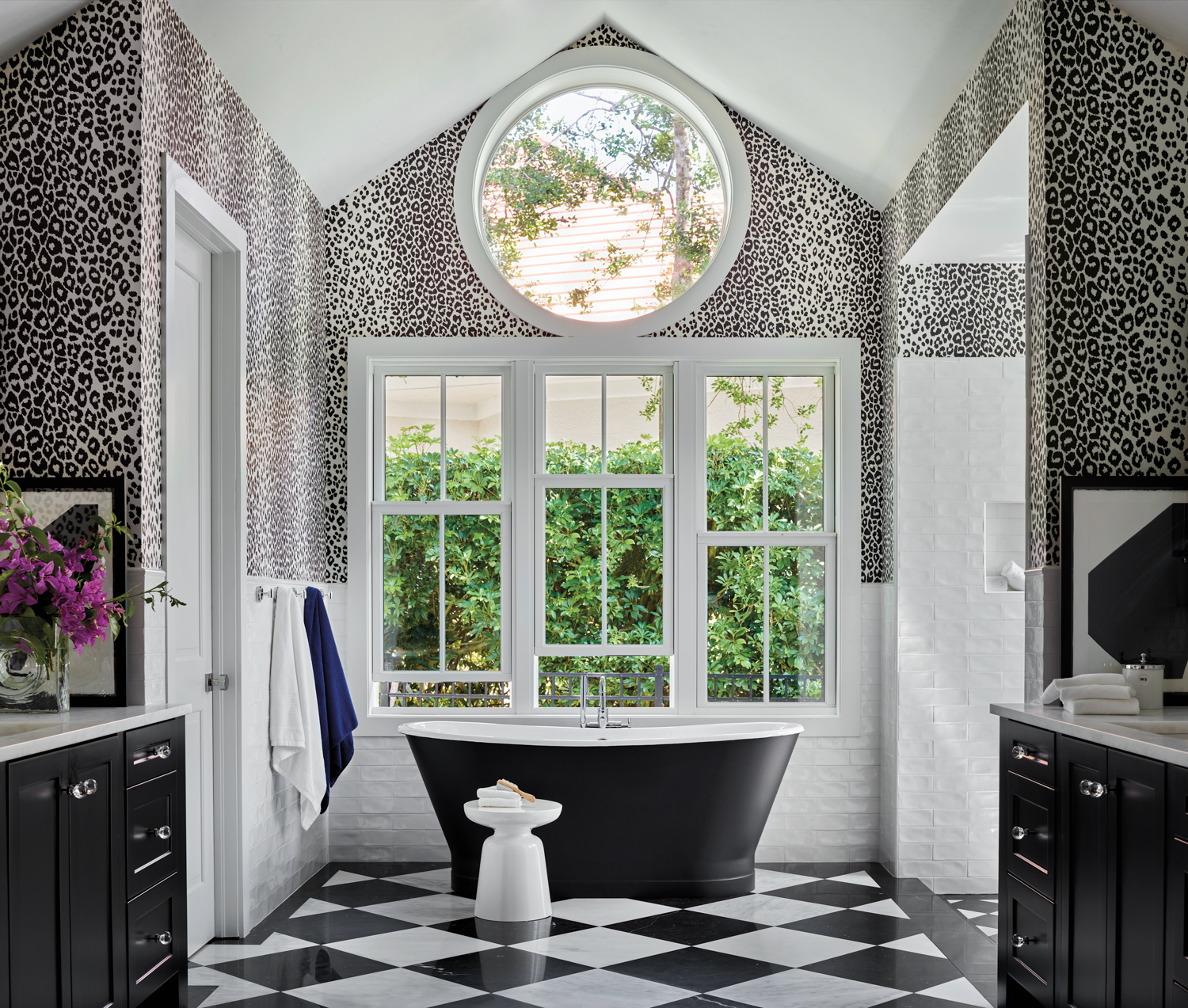 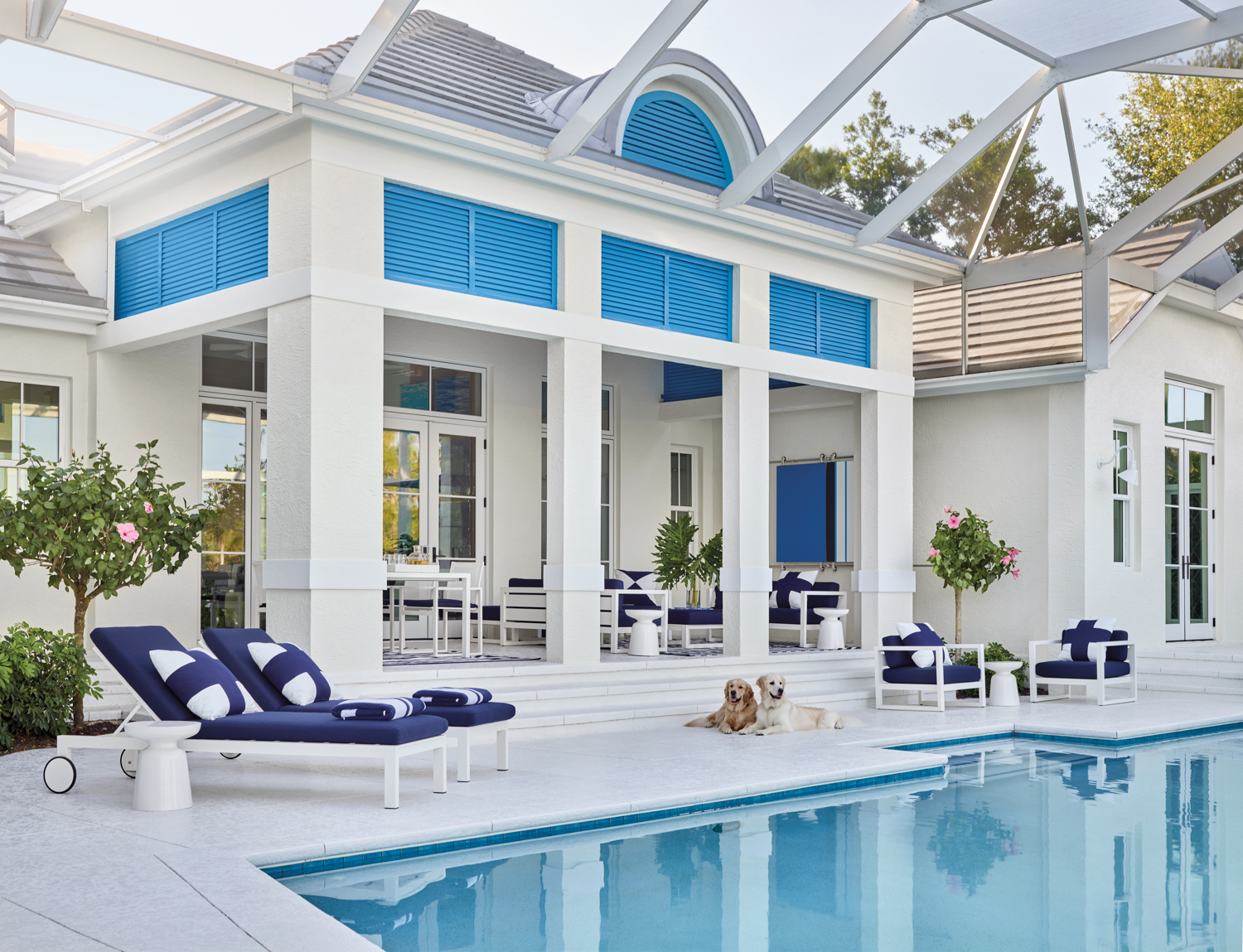 For nearly 30 years, designer Megan Winters and her family gathered at her parents’ seasonal home in Bonita Springs, Florida, for holidays and other memorable occasions. “Everyone in the family loved the house,” she recalls. “It was such a bright, beautiful setup, and the way my mom decorated it was spectacular. It was impossible to not be happy in this house.”

As time passed, however, the residence became too difficult for Winters’ parents to maintain, and so they downsized to a nearby condominium. That’s when the house keys passed to their oldest daughter, who endearingly followed in her mother’s footsteps to make the dwelling a joyful site for wonderful memories. “I wanted it to be more casual but still very sophisticated and comfortable,” Winters says. “There’s good energy here.”

When the designer and her husband acquired the 1990s residence, it had remained largely untouched since her parents had purchased it nearly three decades ago. She saw opportunities to reinvigorate its character, reconfigure spaces and present a chic twist on its buoyant spirit. Teaming up with general contractor Drew Hemmer, Winters repainted the pink façade a crisp white and swapped out the green shutters for a sky blue Bahama style that exudes instant island charm. Hemmer replaced all the windows with hurricane-impact glass and squared off the half-round windows above the doors for a more contemporary look.

Inside, “Megan wanted to expand the kitchen and family room out through the lanai, which was an extensive part of the project,” the general contractor says. “So it made this large great room they never had before and gave it a more modern, open feel.” To create the space, he blew out the wall separating the family room from the screened-in lanai, enclosing the expanded area with windows that bring in views of the surrounding water and golf course. “It made the whole house brighter,” Winters says.

The interior renovation connects the family area to the now-open kitchen, which doubled in size. There, Winters painted the walls a sentimental bright blue. “It was the exact color my mother had when it was her residence,” she says, “and it makes me feel so happy.” This hue served as a jumping-off point for the rest of the house: Embracing a Floridian quality, the designer touched nearly every room with a vibrant shade of blue, including the kitchen’s cabinetry and lighting pendants as well as the patterned rugs and artwork in the more neutral- toned sitting and dining areas.

New European white oak flooring, jute rugs and wicker furnishings—including the kitchen’s counter stools—are a warm contrast to the clean- lined pieces Winters incorporated, such as the sitting area’s metal-armed lounge chairs and the dining area’s rectangular high-gloss table. And in another mix-and-match move, just like her mother did before her, the designer audaciously blends patterns in each space. “It’s the best way to bring a room together with interest,” she says. “Pattern adds the extra element that makes all designs personal.” Dining chairs in a painterly fabric rest on a checkerboard rug, while a swirling blue zebra print defines a hallway alcove. In a guest bedroom, a modern toile repeats on the wallcovering, bedding and armchairs.

Still, Winters smartly offers a break from the bold prints and bright blues with more serene moments. Her classic use of black and white dominates the dining and sitting areas, welcoming guests from the foyer and leading the eye toward the pool. “Every color can complement this pairing—it’s the best ‘neutral’ I know,” she observes. The color combo also shows up in the main bathroom’s soaking tub, marble flooring and leopard-print wallpaper. And it pairs with navy in the main bedroom, a striped haven decorated with grayscale photos of horses, a passion for the designer, who is also an equestrian.

Living on in the hands of the next generation, the residence has transformed entirely without losing its legacy as a cherished memory box. “In some respects, the home is not much different from what it was,” Hemmer says, “and yet it’s still night and day.” Perhaps the greatest testament of its respectful refresh came from Winters’ parents, who visit every Sunday for dinner. “My father told me I brought this beautiful old home back to life,” the designer says. “This home is the lighthearted, casual and happy version of me.” 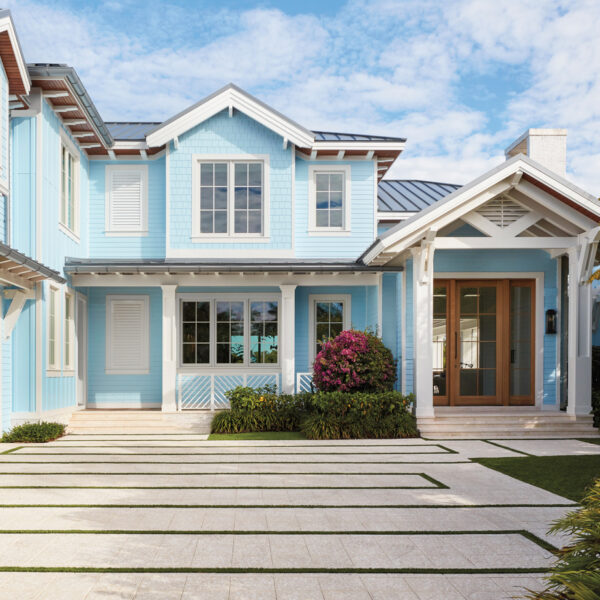 In Naples, A Midcentury Coastal Vibe Welcomes A Growing Family 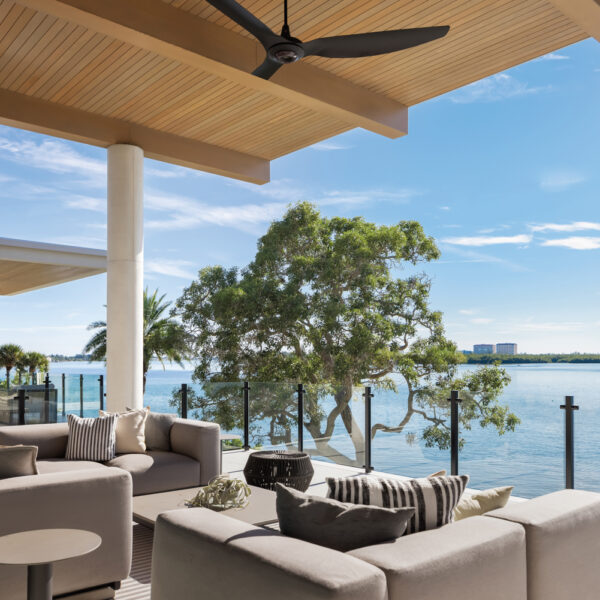 Step Inside A Modern, Tropical Florida Home That Plays Up Its Views 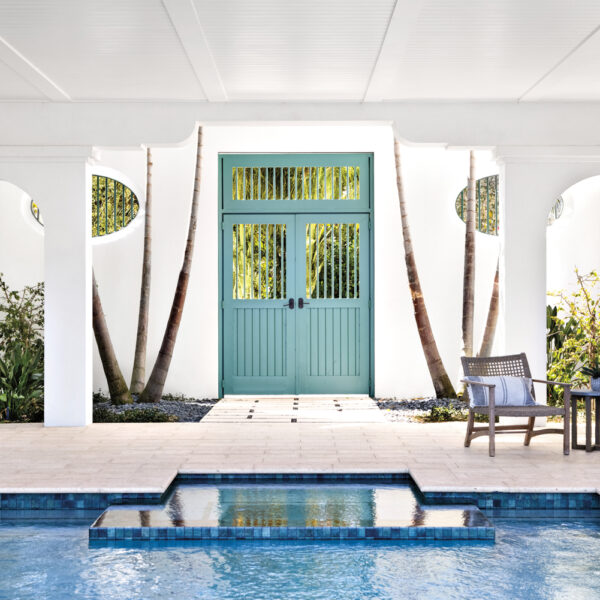 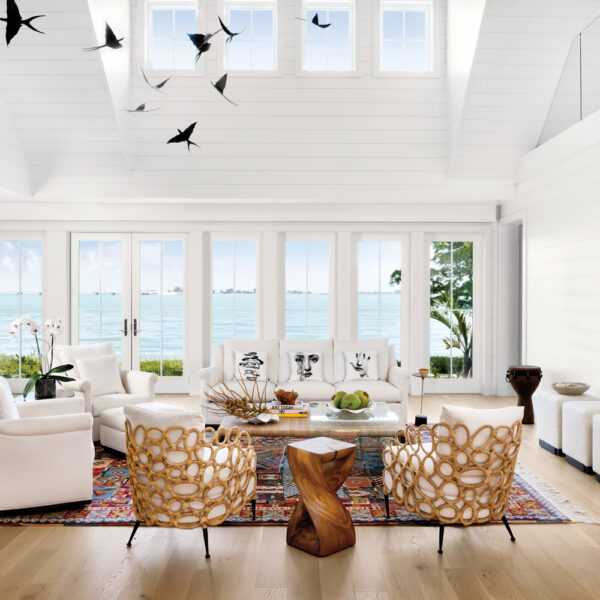 Tour A Whimsical Island Home With A Contemporary Twist 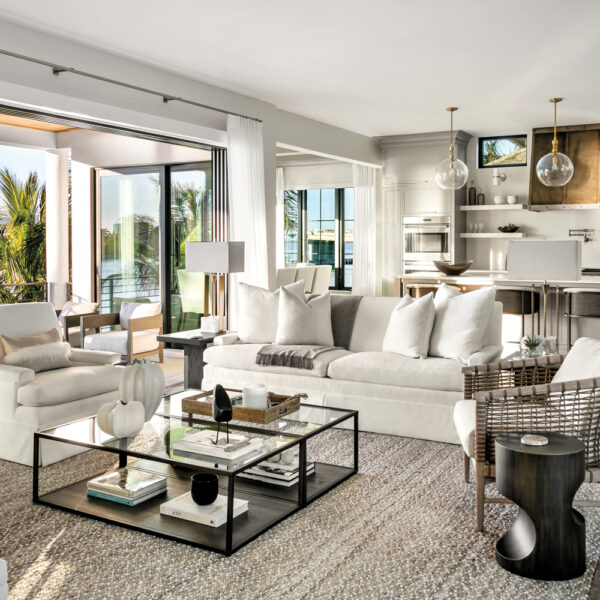