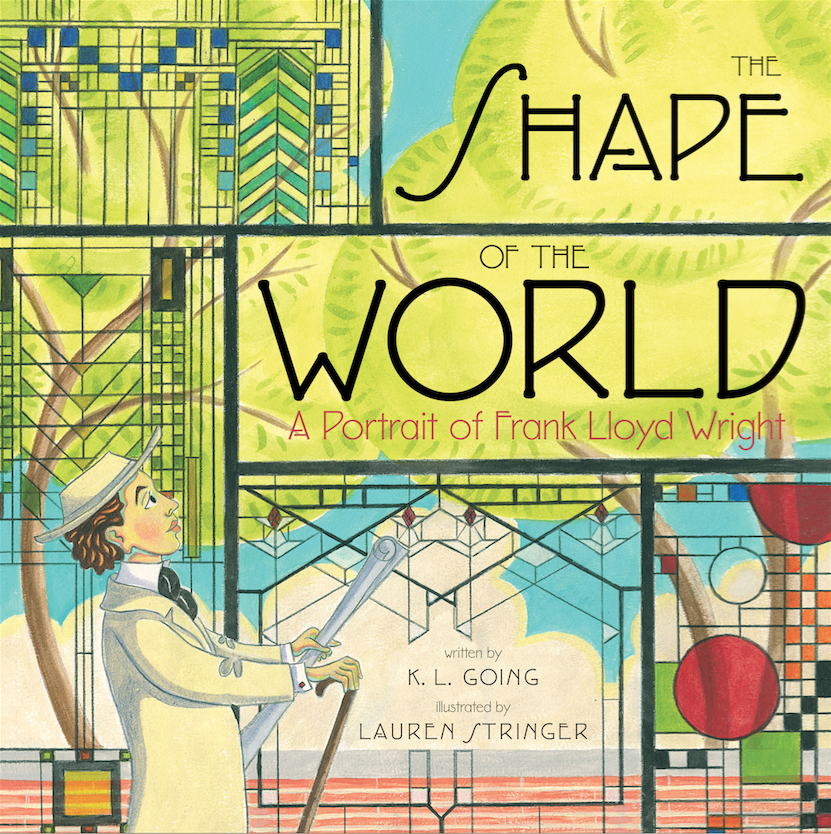 Frank Lloyd Wright’s genius is being introduced to the next generation.

In the new book The Shape of the World: A Portrait of Frank Lloyd Wright, young adult author K.L. Going translates the renowned architect’s life story through words and pictures, illustrated by Lauren Stringer.

Starting with the anecdote of how Wright’s mother gave him blocks to play with as a child, this digestible biography — released Sept. 5 — details his rise to architectural stardom.

We spoke to Going about what she learned and what she hopes to accomplish with her latest endeavor. Plus, get a preview of select pages from the book, below. 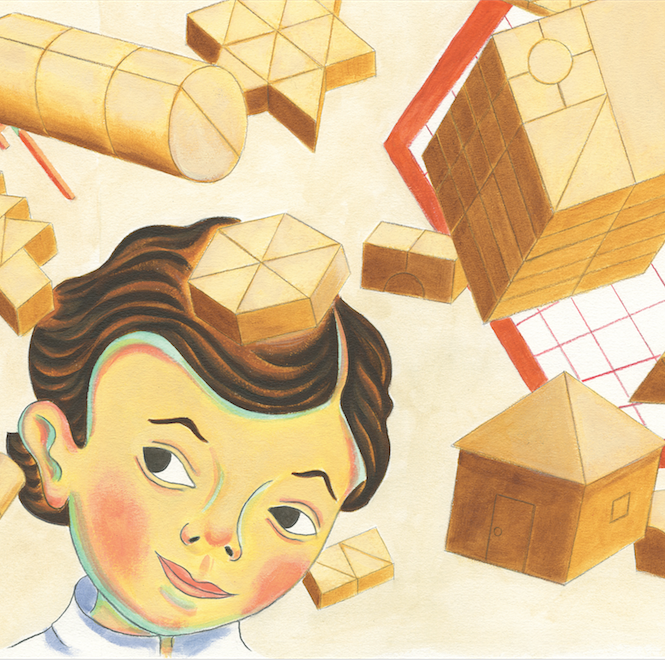 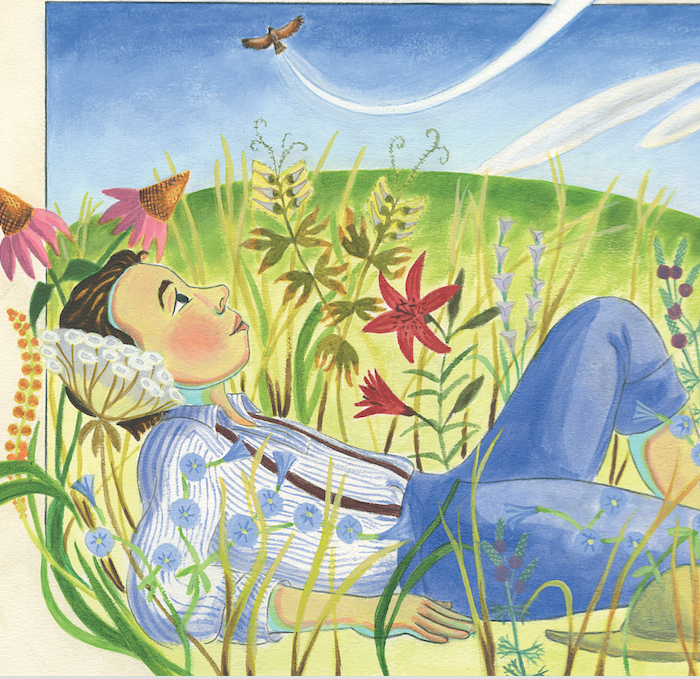 How did the idea come about?

My father has always been a huge fan of Frank Lloyd Wright’s work. He’s a biologist, so he appreciated FLW’s work for the way his designs integrated the natural world. As an adult, I read FLW’s autobiography and several different works about his life, but I realized that much of that material wouldn’t be appropriate for young children. Despite that, I wondered if there was still a way to introduce picture book readers to America’s greatest architect. I asked myself one question: “When you take away the facts and dates, what was most important about Frank Lloyd Wright’s life and work?” The answer, for me, is what I wrote in The Shape of the World.

Is this book nonfiction?

Yes and no. The book is based on facts about Frank Lloyd Wright’s life as he portrayed them in his autobiography, but many historians believe that he took some creative licenses when he wrote told his own story! I, too, took some creative licenses when imagining the life of Frank Lloyd Wright as a boy. So, although it’s based on fact, the book is not so much an attempt to capture the facts as it is to capture something much more important: one man’s vision of the world.

Were there any noteworthy facts you found while researching?

I was shocked to learn about the twists and turns of Frank Lloyd Wright’s adult life. So many scandals (affairs) and tragedies (murder), but obviously these parts of the story didn’t make it into the picture book!

What was one of your favorite children’s books growing up and why?

I had so many favorites. My mother is a librarian, and I’ve always been an avid reader. I loved the novels of Susan Cooper and Jean Craighead George. When it came to picture books, the favorites that stick in my memory are The Story About Ping by Marjorie Flack and Bedtime for Frances by Russell Hoban.

What do you hope kids will take away from the story?

My hope is that children, even at a very young age, will be able to see the world through the eyes of a great architect. How do we develop creative vision in our kids? I believe we model it, and what better introduction than through the point of view of someone who was a visionary in his field. And if there’s a child out there who is inspired to find his/her own life’s work? That would be truly marvelous. 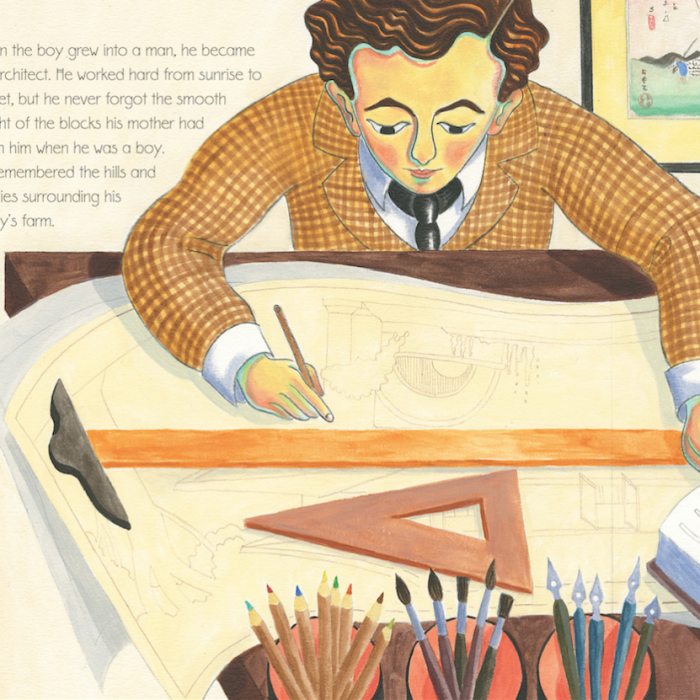 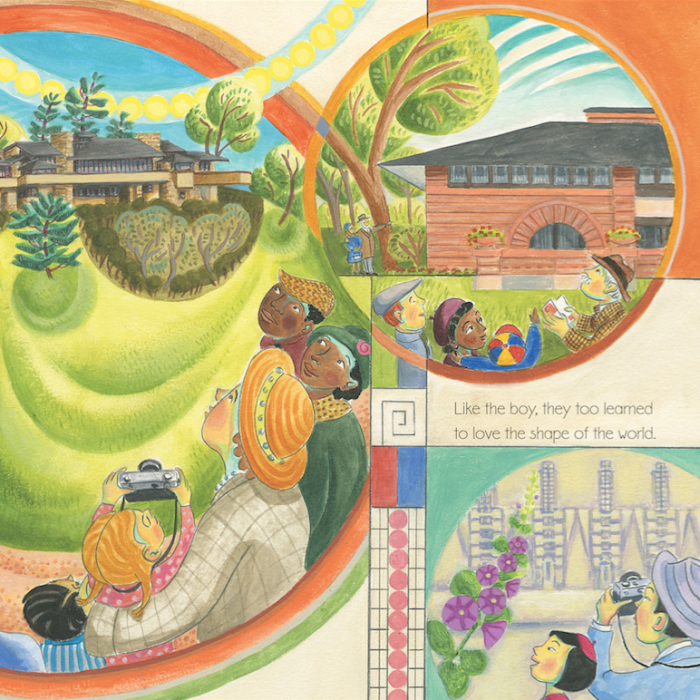