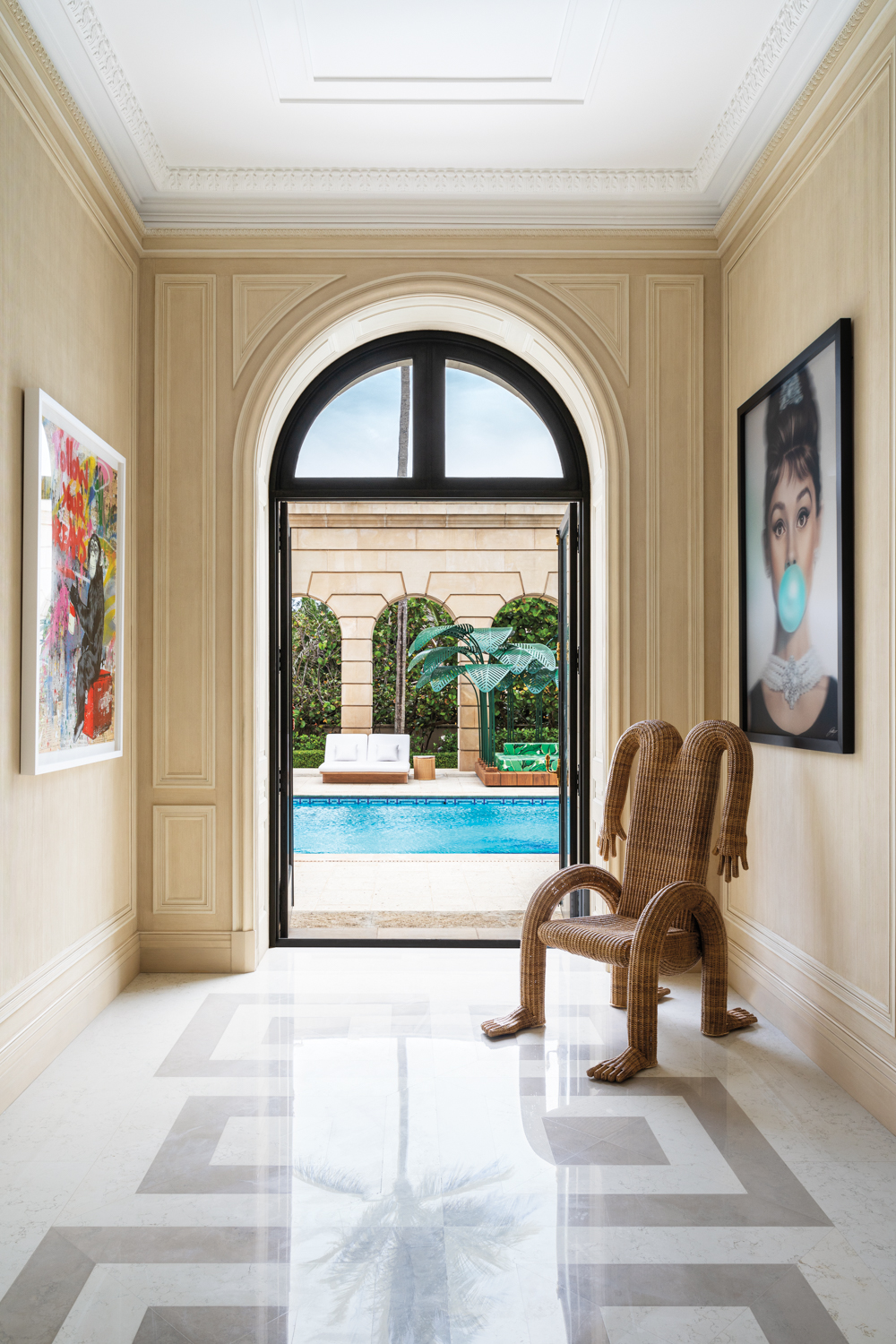 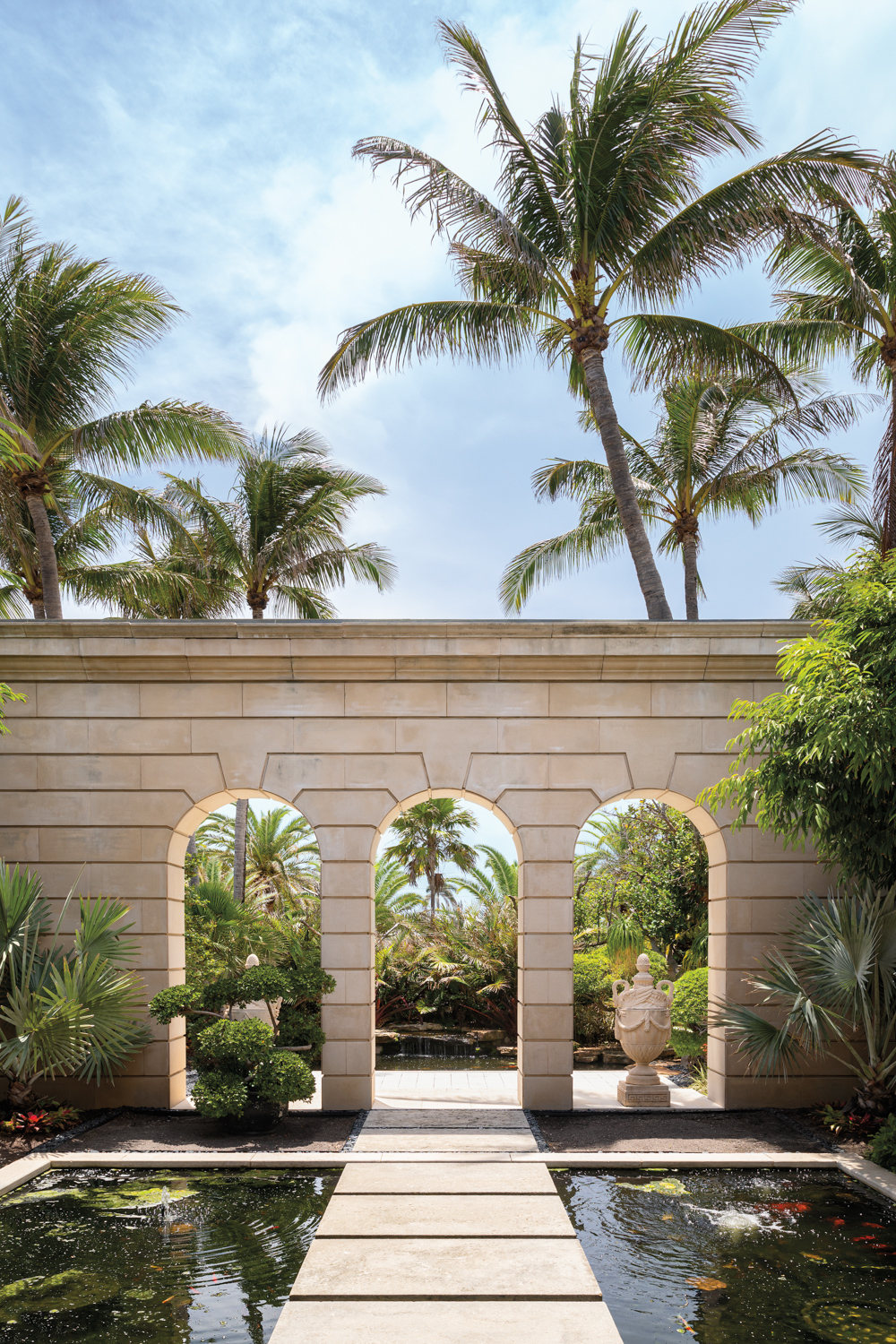 The limestone walls that frame the property’s koi pond reinforce the home’s French influences. The GreenShape enhanced the space with palm trees and lush greenery.

The limestone walls that frame the property’s koi pond reinforce the home’s French influences. The GreenShape enhanced the space with palm trees and lush greenery. 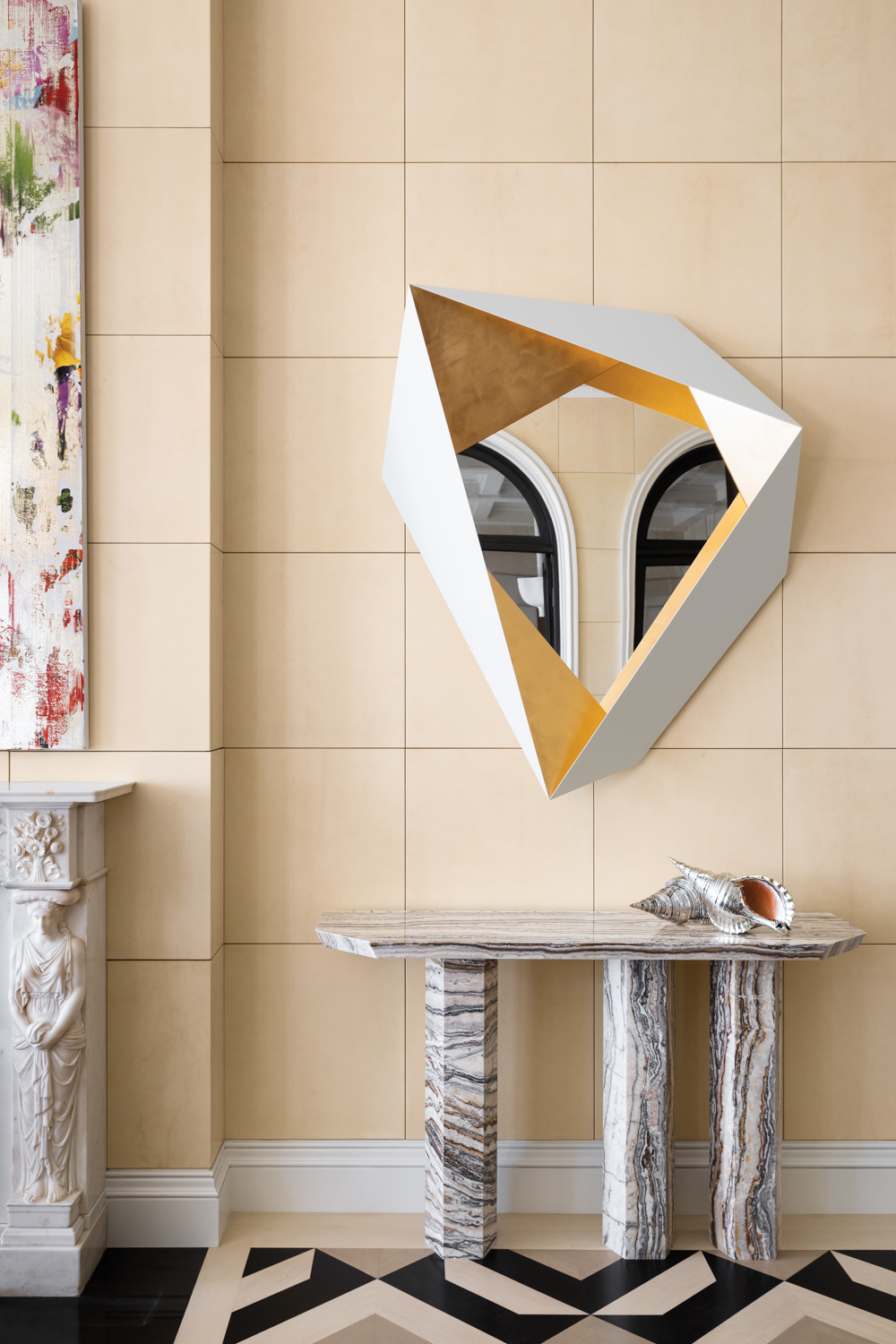 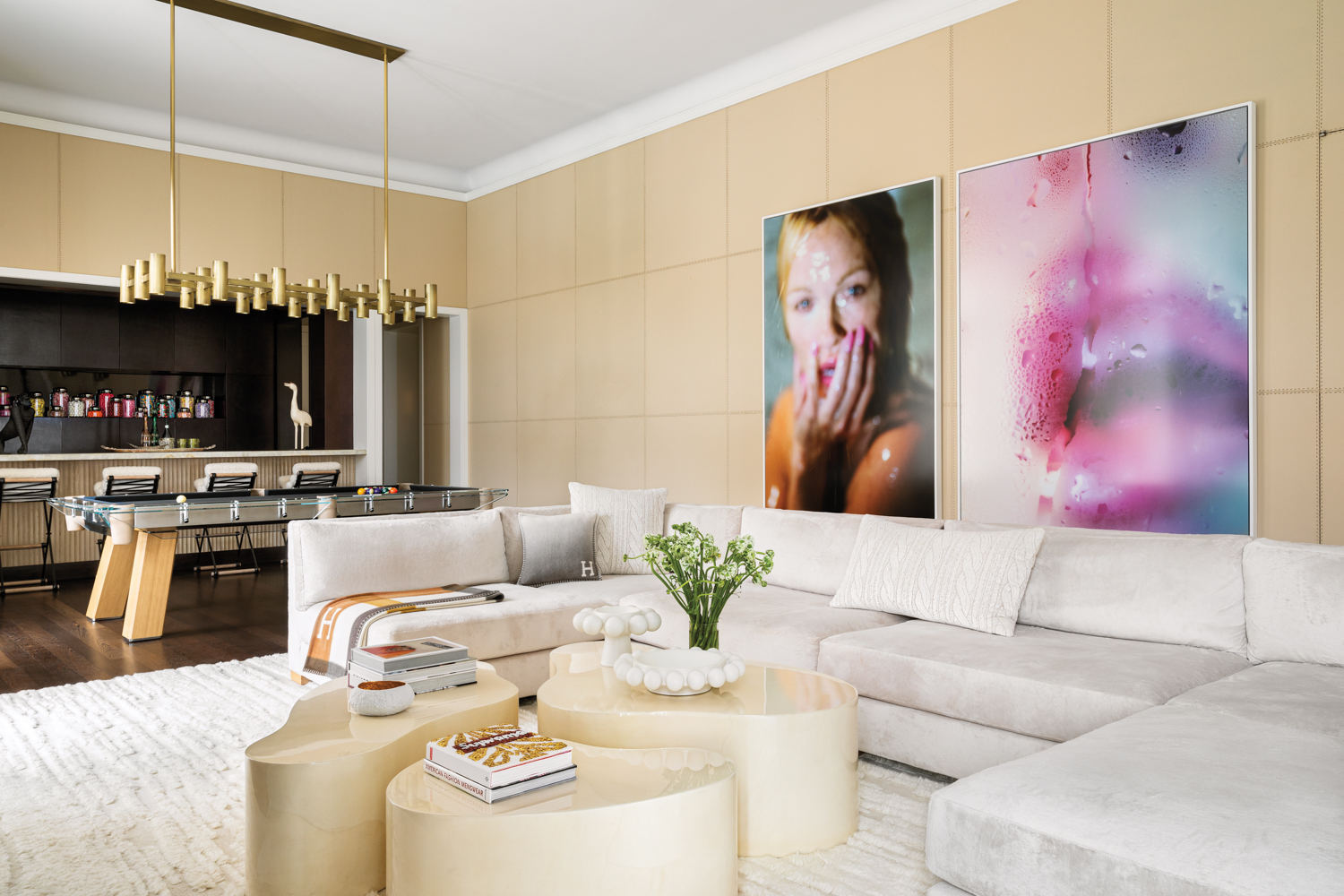 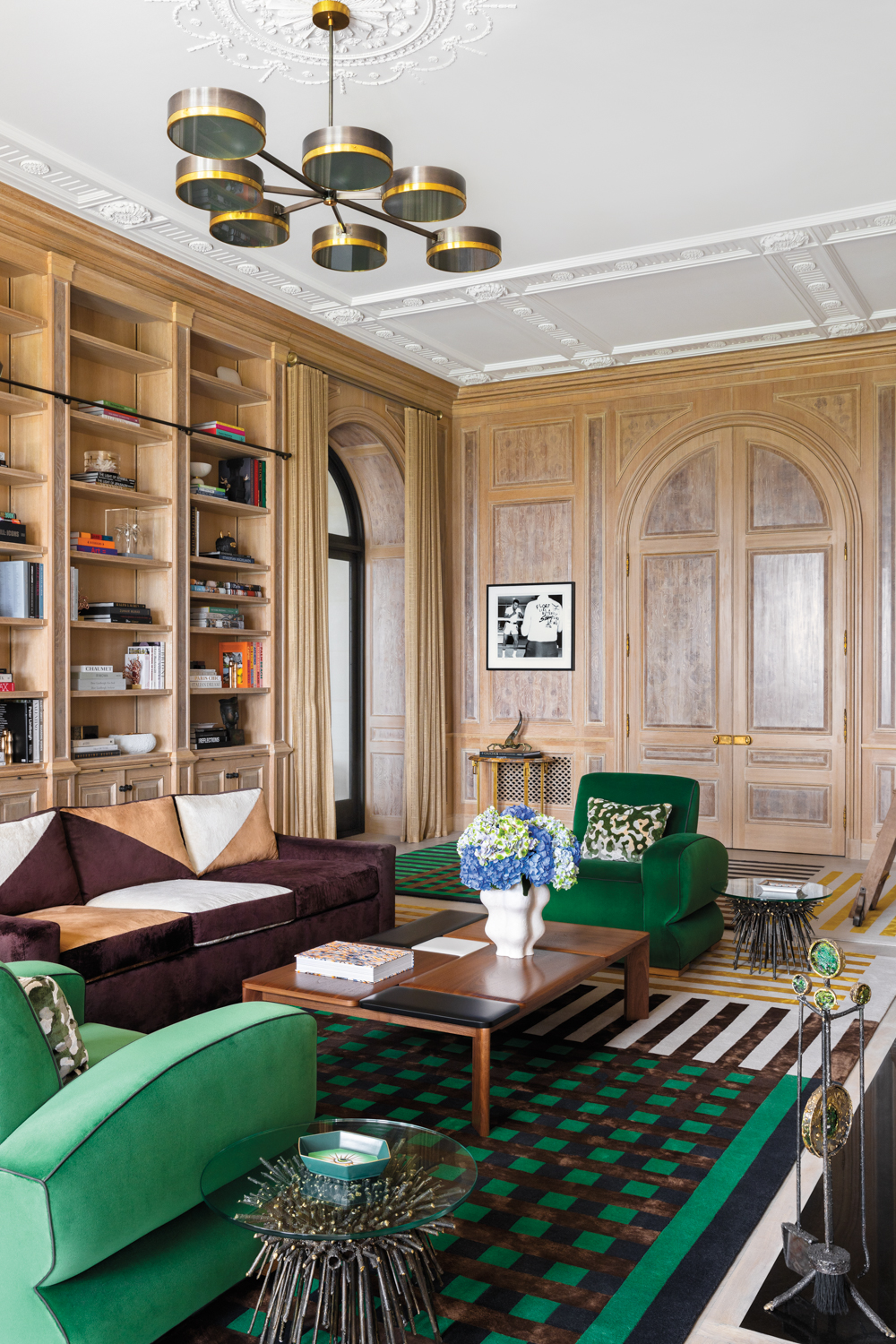 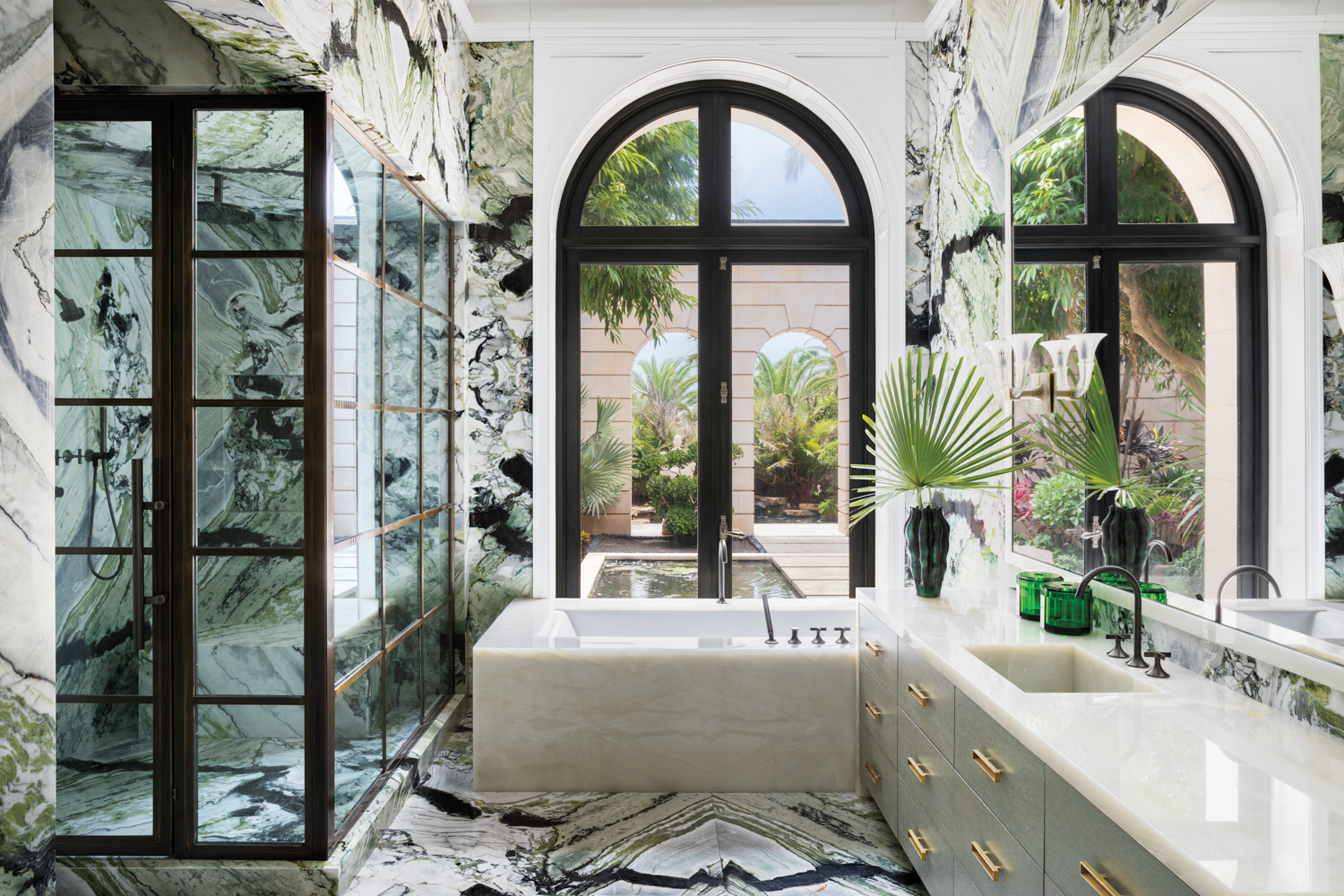 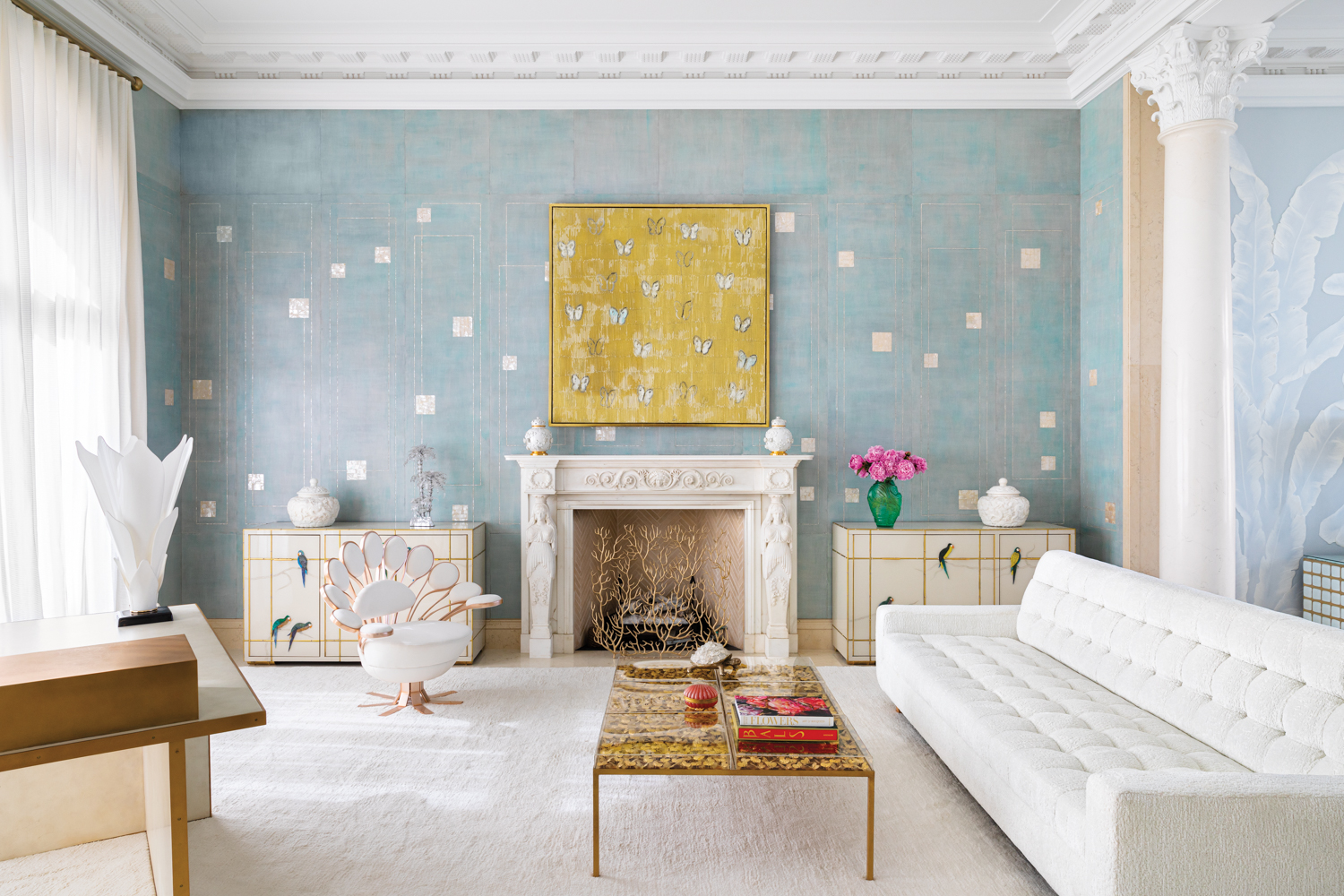 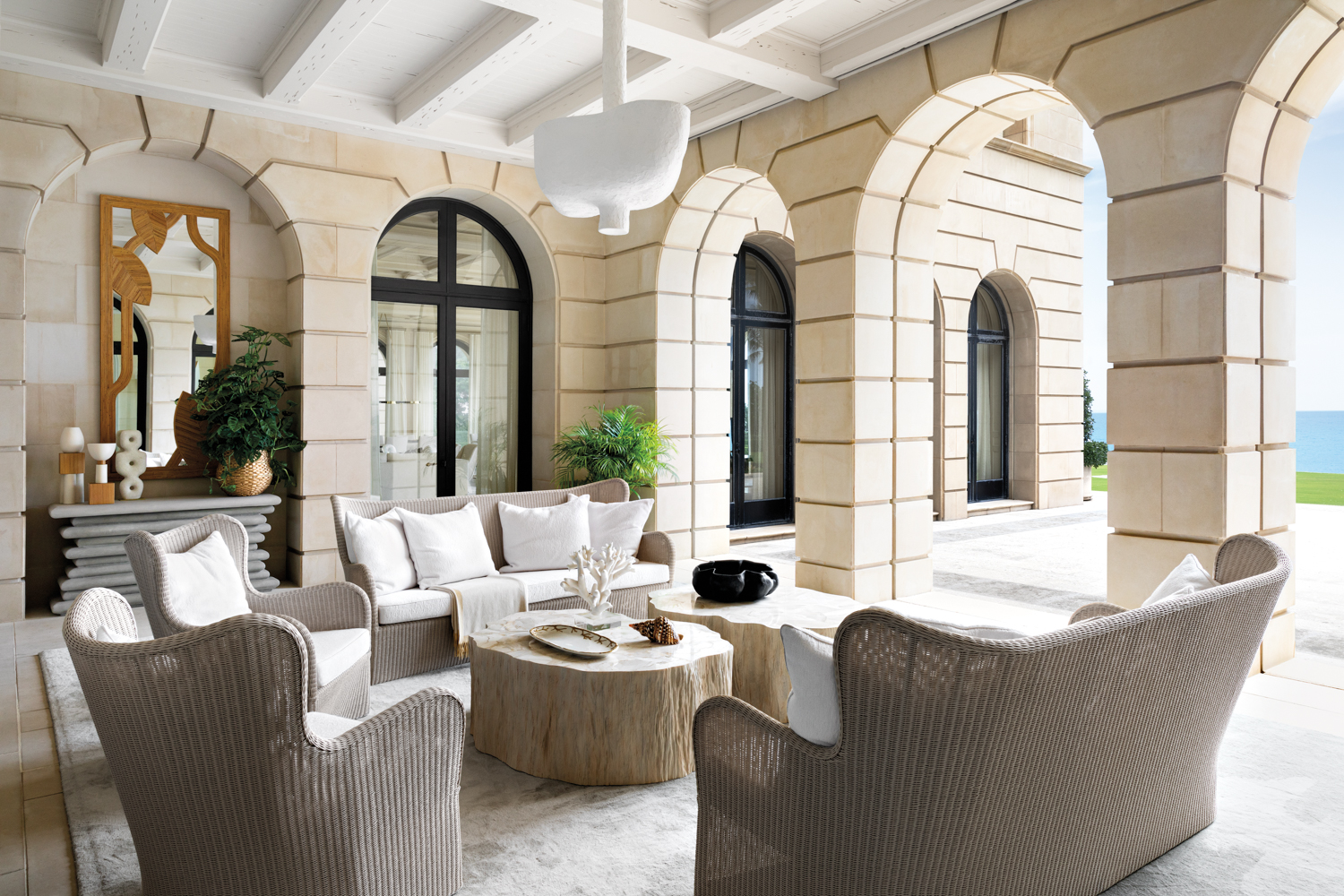 What would you do if you had to infuse a sense of fun into an ornate, French-inspired estate? If you’re designer Michelle Gerson, you take a deep breath and approach it like you do any other project—even if the residence in question is a grand property. “The bones of the house are truly incredible,” she emphasizes. “But it was very serious. We needed to make it younger.”

The homeowners, Brooke and Steven Schonfeld, weren’t exactly looking to buy when they first discovered La Rêverie—an appropriate name for the breezy Intracoastal-facing estate, French for “daydream.” At the time, they were touring properties in the area to gather ideas for a vacation home they planned to build nearby. “We walked in and instantly fell in love with it,” Brooke remembers. “It was beautiful, with museum-quality art and furnishings, but our lifestyle isn’t so formal. We wanted something light, airy and whimsical.”

Faced with the task of preserving the 2001 structure’s original architecture and detailing while making it family-friendly didn’t faze Gerson. “I knew Brooke and what she wanted, so things went much faster,” says the designer, who had outfitted the couple’s primary residence in Old Westbury, New York, and tackled their Manhattan apartment soon after she started this project. Here, the concept was “Palm Beach meets Paris”— beachy, artsy, luxurious and comfortable, for a look that combines the designer’s and wife’s tastes. “My style is a bit eclectic, and Michelle’s is a little more modern,” Brooke acknowledges, “but we figured out how to meet in the middle.”

With a team assembled by general contractor Andrew Sciame—mounting to as many as 120 workers at the site on any given day—and a year to complete the renovation, the group embarked on a considerable to-do list. There was no question the gilt paneled walls, moldings, carved plaster ceilings and patterned floors of wood and stone would be retained. They simply lightened everything by painting ceilings white, stripping dark wood floors and swapping out heavy draperies for textured sheers.

Although the layout would remain largely untouched, the owners requested a few major changes. Among them was transforming the sizable pantry into a casual cooking area and updating the lion’s share of the house’s 16 bathrooms—plus adding a second bathroom to the primary wing. This space, especially for Steven, called for book-matching 44 slabs of green marble. “It was a massive undertaking, but everyone understood the quality we were striving for,” Sciame says.

When it came to the interior design, Gerson first considered the home’s daunting size and number of spaces. “Every room is large,” she notes. “So we focused on one at a time and just crossed them off the list.” The square footage in particular drove nearly every decision, from how many patterns to incorporate (“when there’s too much going on, it feels chaotic,” the designer explains) to the scale of furnishings and fixtures. “Most pieces would look like a shrinking violet here,” she says. “We had to put on our ‘go big or go home’ hats, and anything we liked had to be made almost twice as large.”

Weaving together old and new, Gerson filled the spaces with a vibrant mix of funky furnishings, artisan pieces and contemporary art. In the primary bedroom, for instance, blue plaster wallpaper hand-painted with white banana leaves is a tranquil backdrop for a vintage Lucite bed, a cashmere carpet and a chandelier that once hung in a Chanel boutique. The dining room’s midcentury chairs hold court with modern sculptural mirrors and three-legged marble consoles. And the designer wasn’t afraid to pair the library’s newly lightened paneling with graphic rugs and oversize seating in shades of green, brown and black. “Even though there are a lot of formal pieces in the house, everything is approachable and comfortable to sit in,” she says. “There’s nothing that’s just for show.”

This lack of preciousness is something the Schonfelds embrace. During their first Christmas in the residence, Brooke gifted hoverboards to her daughters and her sister’s children, and the five of them happily zipped up and down the expansive gallery hall past works by Jean-Michel Basquiat and Robert Longo. “We love spending time at home, and we don’t restrict ourselves out of a fear of ruining things,” she says. “We really live in this house.”