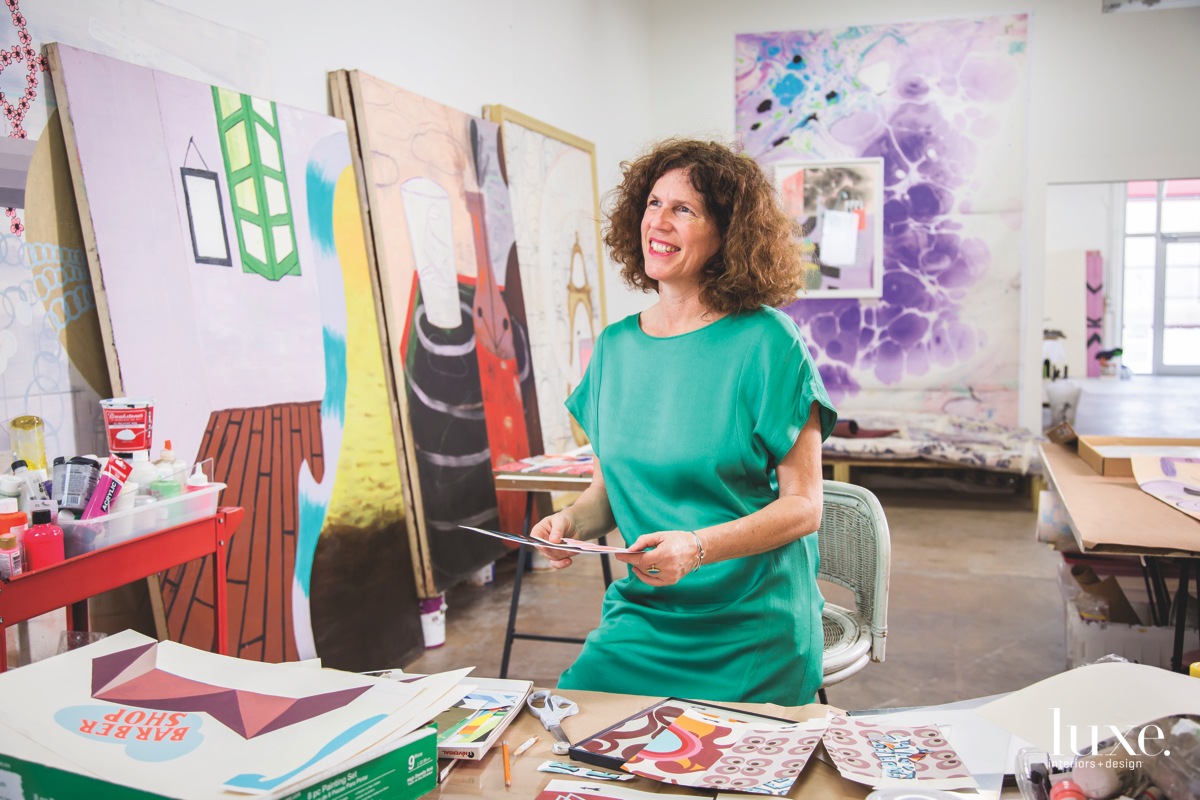 Michelle Weinberg sits in her soaring new Little River art studio while her 16-year-old mixed-breed dog, Lucy, rests at her feet–a small snowball amid the geometric patterns and hothouse hues that color her oeuvre. “My work is a vivid backdrop for human activity,” Weinberg says. “Whether they are miniature or monumental, I create environments like stage sets that encourage people to interact with them.”

Weinberg’s artistic creations, which encompass everything from drawings and paintings to hand-bound books, rugs, wallpapers and tiles, reflect her eclectic interests in architecture, fashion, graphic design and street signage. Illustrative, humorous and flat-colored, they are as much Matisse as they are Warner Bros. cartoon. A case in point is the striking pink-and-black mural she wrapped like a shawl around the exterior of the Wolfsonian-FIU museum in Miami Beach in 2014 to mark the centennial of World War I. “It was inspired by the razzle-dazzle ship camouflage created by artists of that time to fool the enemy,” she says. 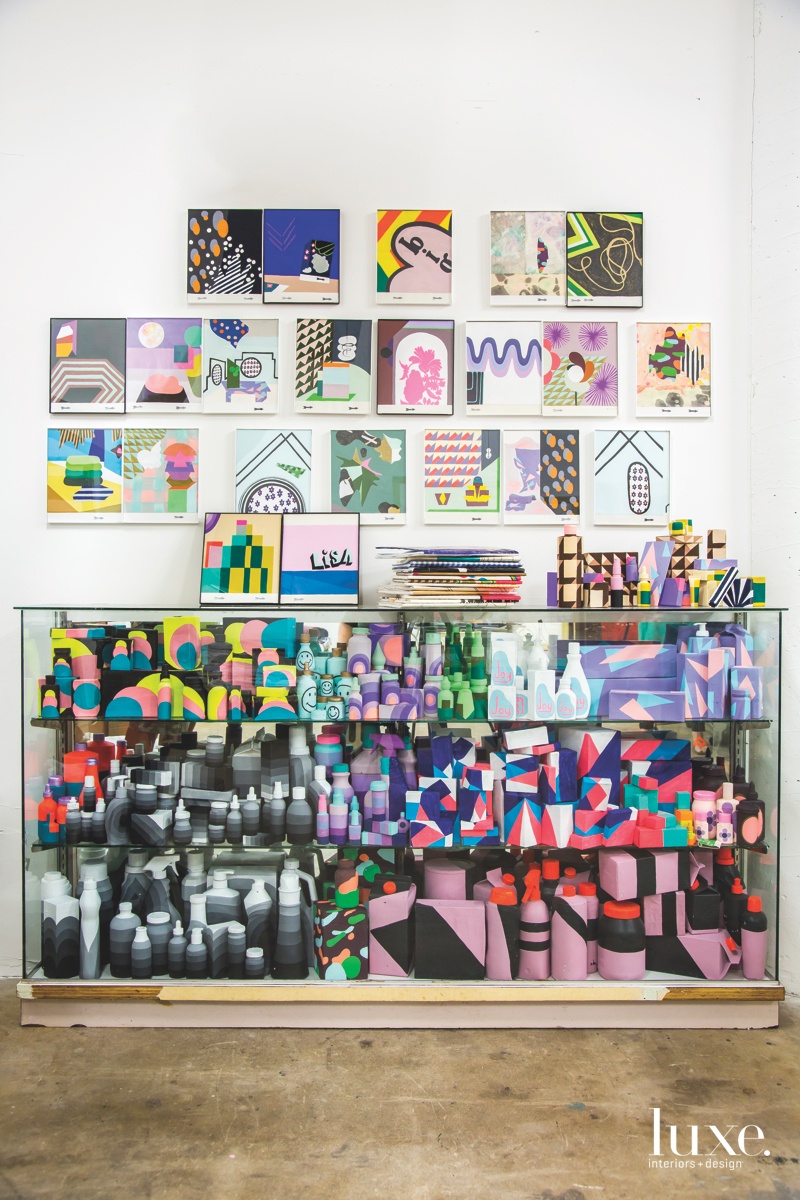 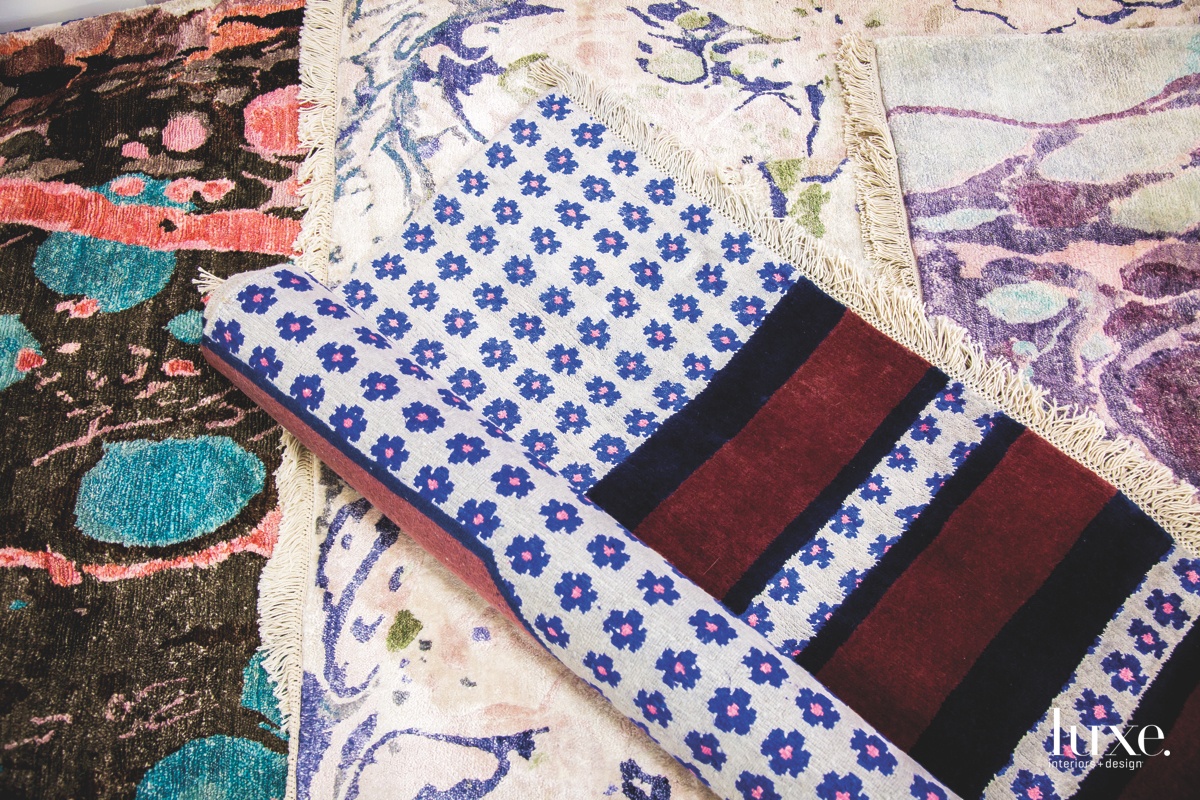 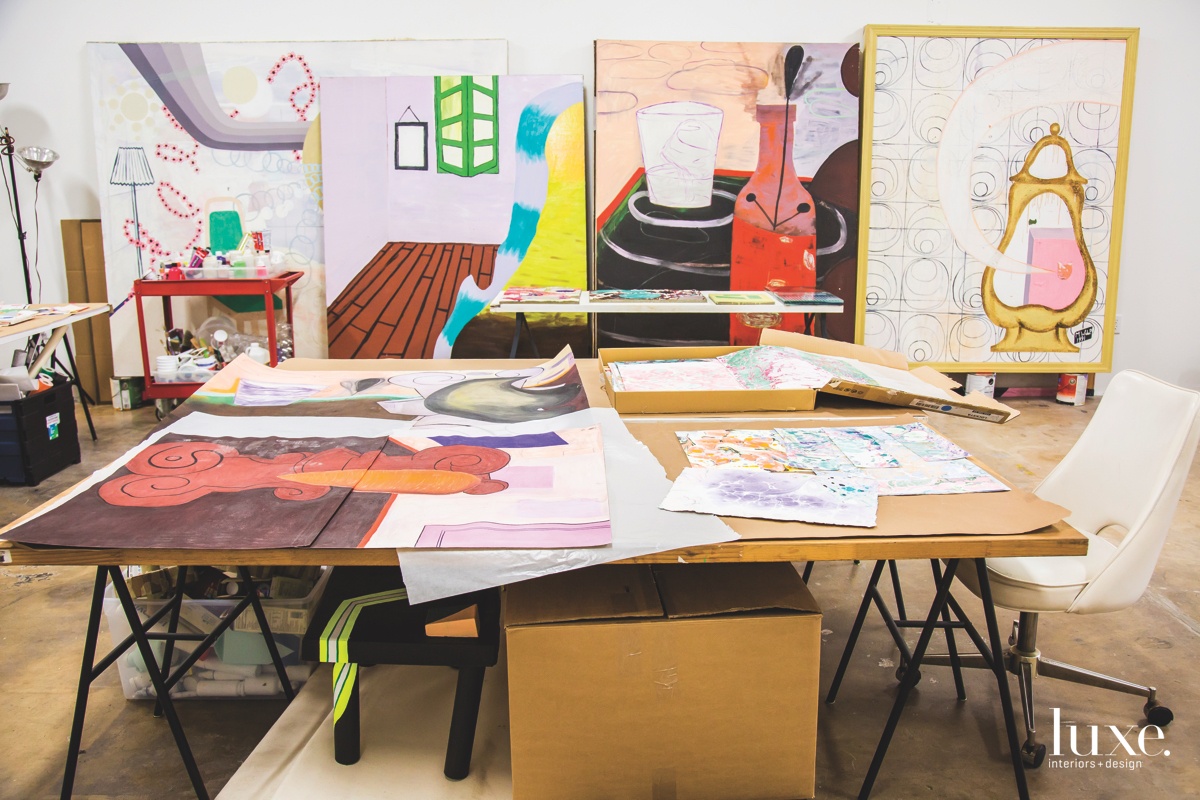 Several of her designs, in a panoply of colors and patterns, have been translated into custom hand-knotted carpets, which are made in India and available via the artist or Design Sublime gallery in Miami.

Several of her designs, in a panoply of colors and patterns, have been translated into custom hand-knotted carpets, which are made in India and available via the artist or Design Sublime gallery in Miami. 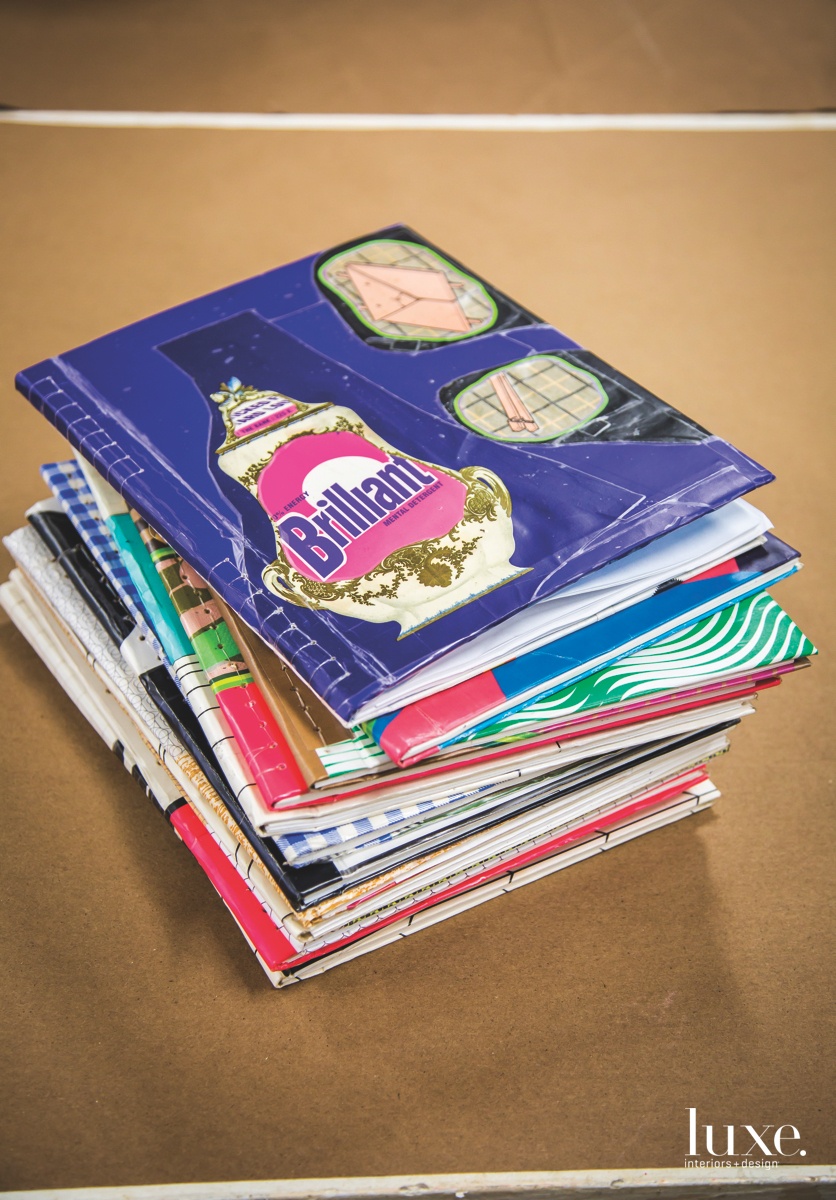 The city's hothouse colors find their way into her vibrant creations on display in her studio.

The city's hothouse colors find their way into her vibrant creations on display in her studio. 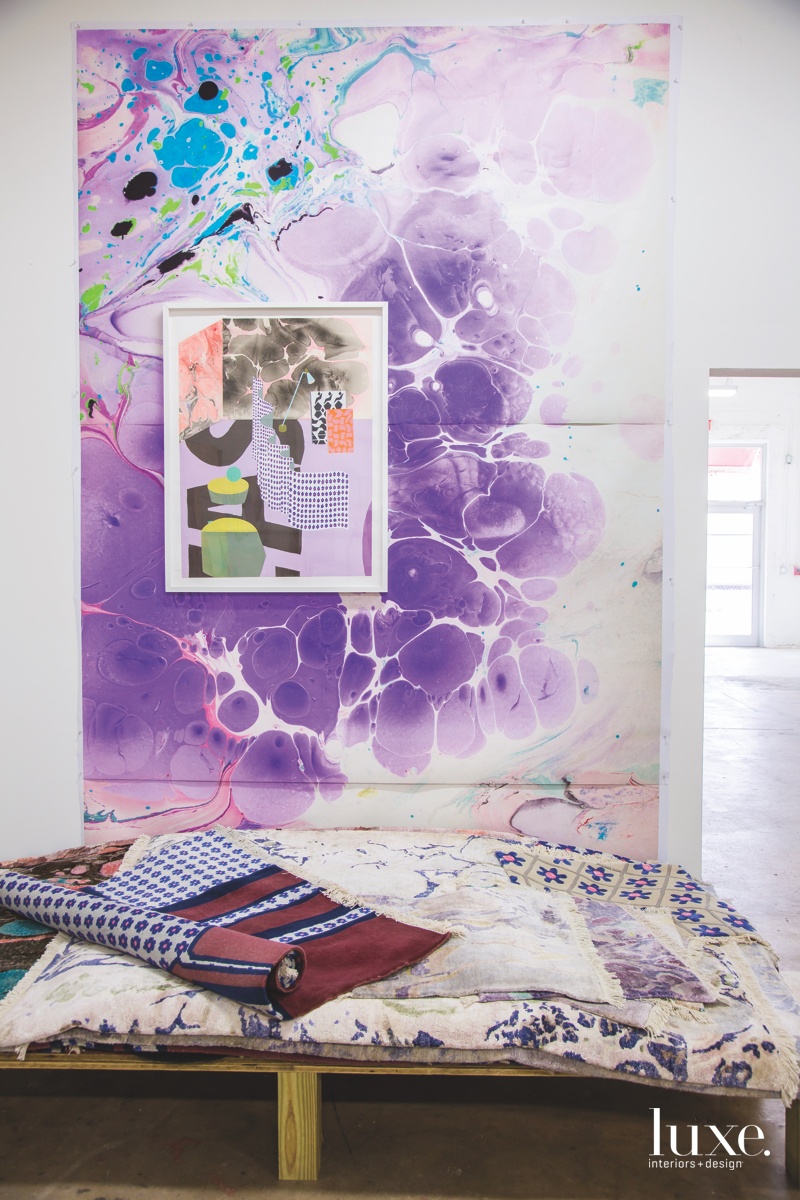 She also uses architecture, fashion, graphic design and street signage as jumping-off points for her work, filling more than 60 hand-bound notebooks with sketches.

She also uses architecture, fashion, graphic design and street signage as jumping-off points for her work, filling more than 60 hand-bound notebooks with sketches.

Buildings as varied as Facebook‘s Miami office and the lobby of the boutique AC Hotel Miami Beach feature Weinberg’s murals and installations. And beyond South Florida, her work has been exhibited throughout Europe and the U.S., including at the Corcoran Gallery of Art in Washington, D.C., and in publications ranging from The New York Times to the Louis Vuitton City Guide Miami. The artist, a New York native who splits her time between Miami and Manhattan, has drawn and created art since she was a child. But Miami–in particular–influences her work. “I respond to the unique intersection of Art Deco architecture and tropical flora,” she says.

Over the course of her 30-year career, Weinberg has filled 65 hand-bound books with drawings that serve as jumping-off points for new pieces. “I start with sketches that are of the cocktail napkin variety,” she says. “I draw with black ballpoint on white copy paper, and the sketches have a literary aspect–I add titles, words and notes to myself.”

Weinberg takes pleasure in manipulating fundamental forms to “find surprising relationships.” Some of her works feature marbleizing, an ancient hand technique resulting in swirling patterns and colors that she taught herself and updated with contemporary pigments. “With marbleizing, there’s a lot of chance involved in the results,” she says. “It’s like baking. Sometimes it comes out well; sometimes it’s inedible. And sometimes I look at the bad and see something good in it.”

Weinberg’s diverse variety of work–a current exhibit in Wynwood features paintings on paper and a rug while a show displaying through June 4 at the Art and Culture Center of Hollywood includes larger works on paper reminiscent of modernist posters–blurs the line between art and design. Currently she’s working on a series of 8-by-10 framed collaged gouaches collectively titled Storyboard. “I make them in pairs, but when I install them, I mix them up,” Weinberg says. “I play with a lot of narratives, but I don’t deliver conventional plots with a beginning, middle and end.”