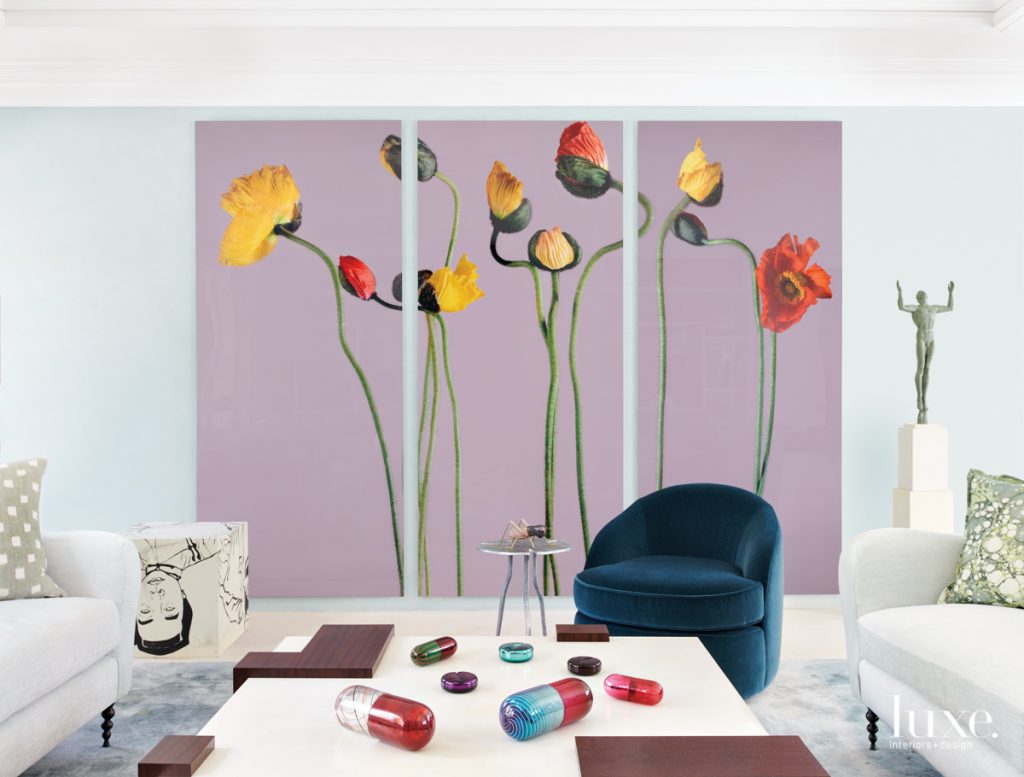 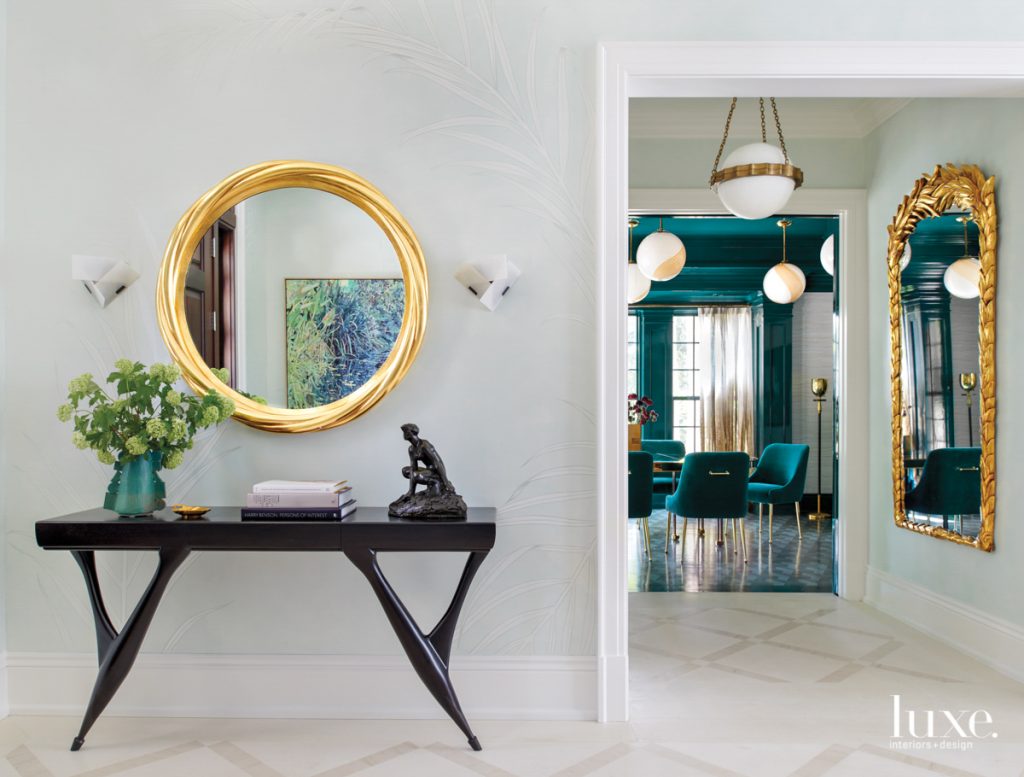 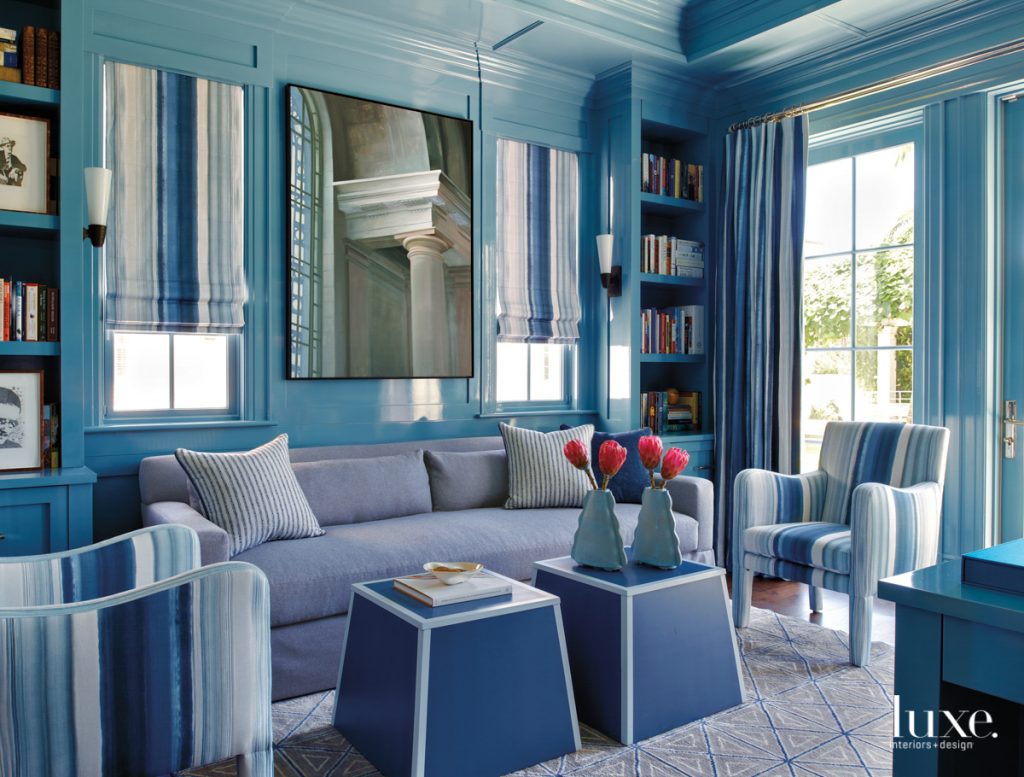 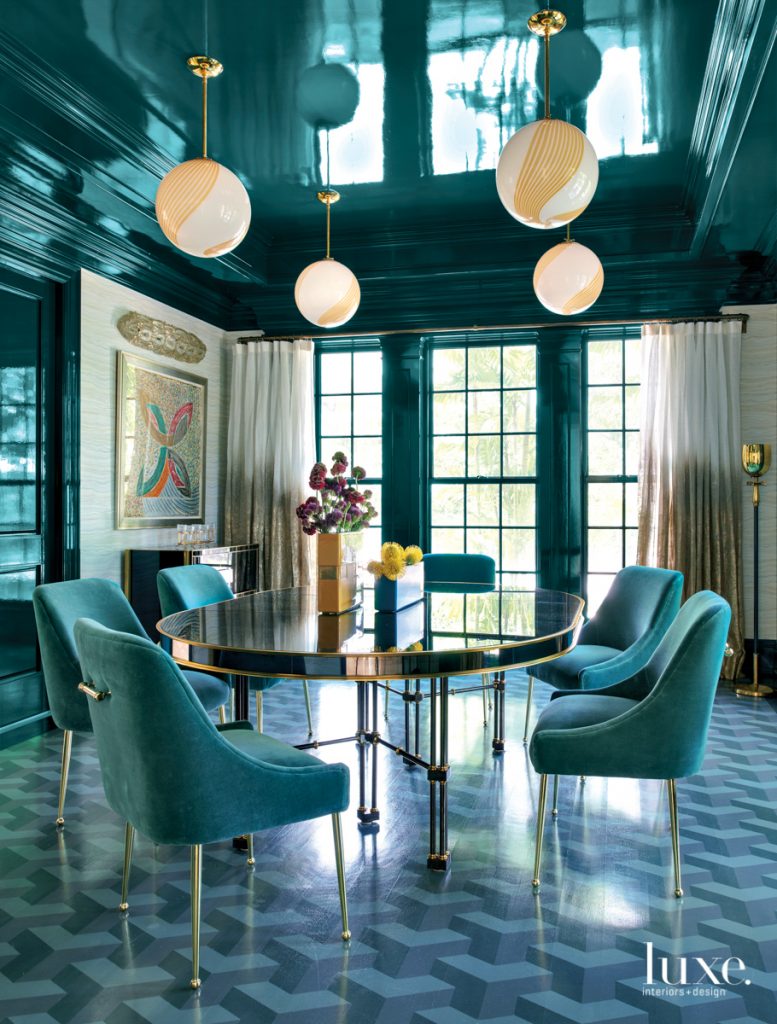 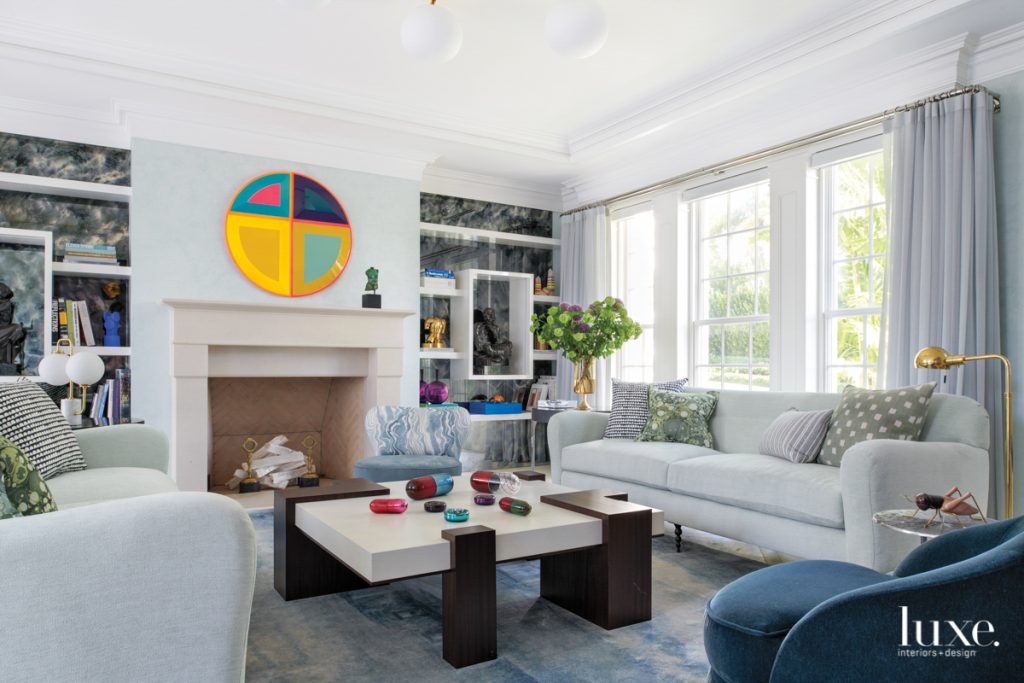 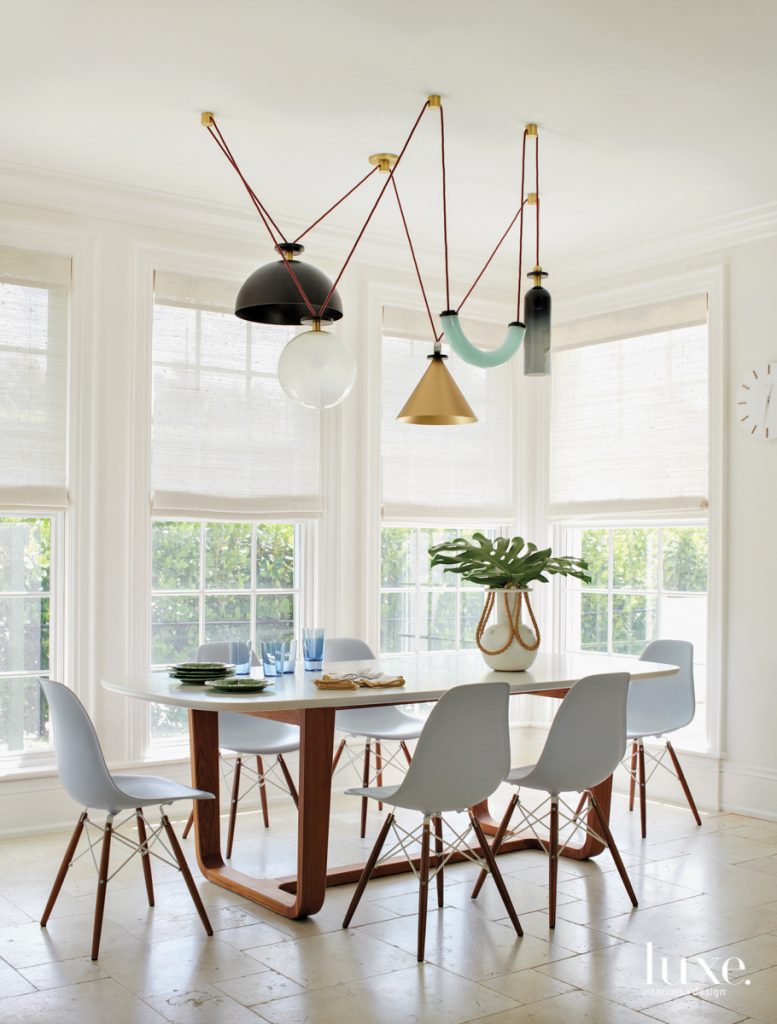 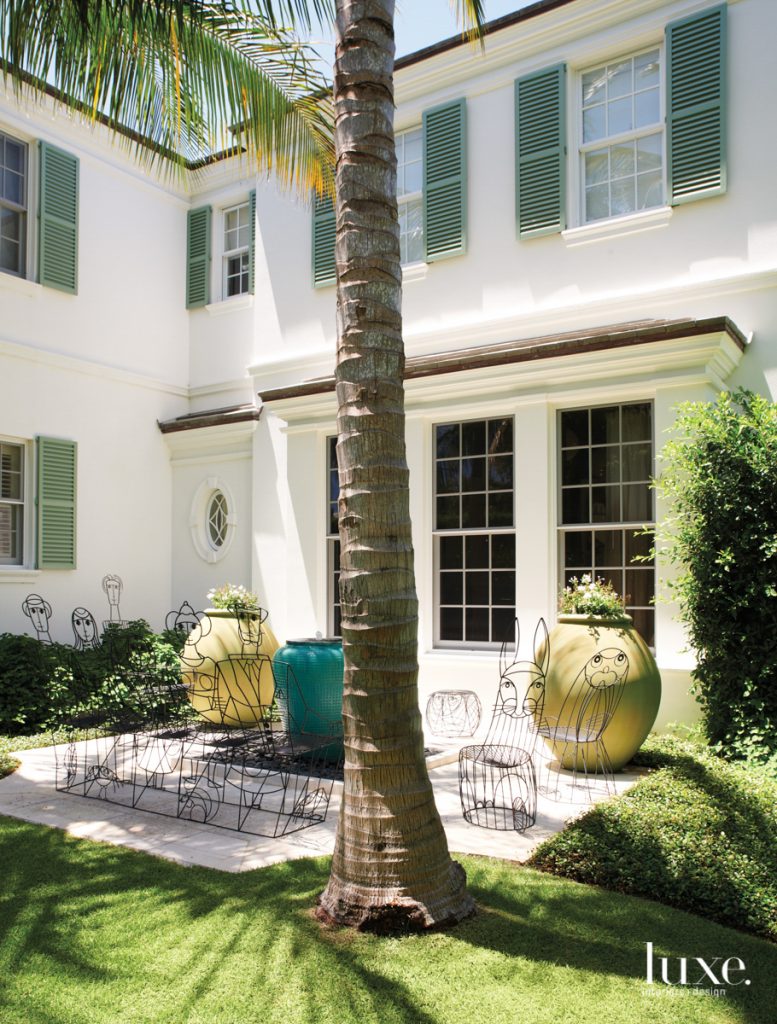 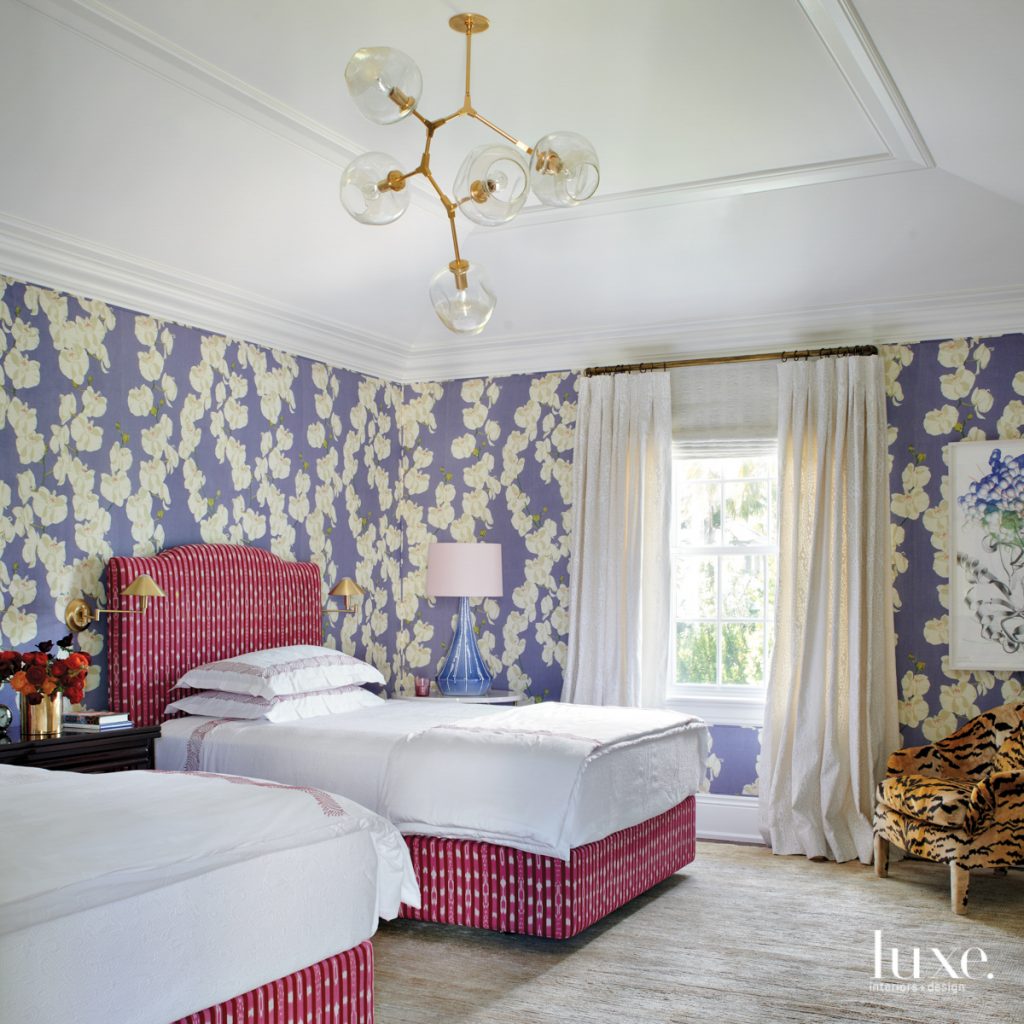 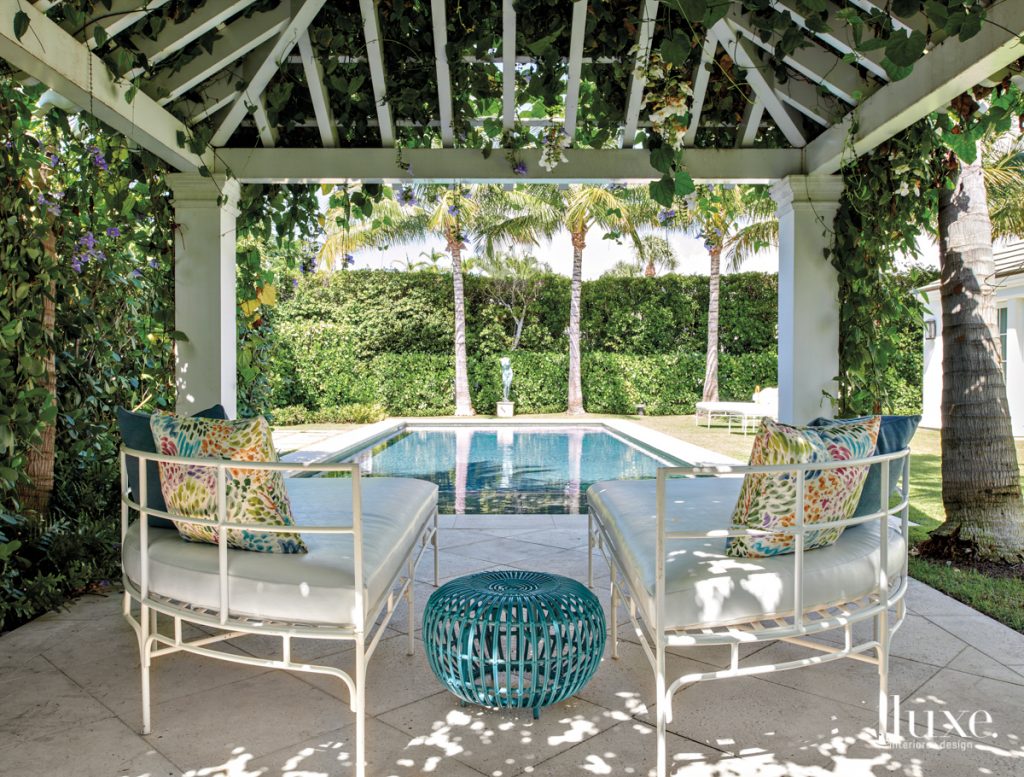 After raising their family in a Mediterranean Revival-style residence in the estate section of Palm Beach, Peter Cummings and Julie Fisher Cummings decided to downsize. Relinquishing their expansive John Volk-designed abode for a West Palm Beach, Florida, condo with stunning ocean views certainly seemed more convenient. But when the scaled-down square footage began impeding visits from their five grandchildren, it became abundantly clear apartment life was not for them. The only solution: upsize. This time around, however, they moved to the island’s North End, where a recently completed classical-style house by Dailey Janssen Architects awaited.

Outfitting their new, much larger home was considerably easier thanks to the couple’s go-to designer: their daughter, Caroline Rafferty. Working with general contractor Josh Pertnoy, Rafferty and her parents personalized the interiors, modifying everything from flooring to bathroom tile and adding custom millwork and decorative paintings. “The goal was to make it their own and for it to look unique and original,” Pertnoy says.

The updates extended outside, where landscape designer Jorge Sanchez and landscape architect Claudia Visconti replaced the driveway–its raised border was problematic to vehicles–with a gracious, half-moon drive and added a walkway for guests entering from the street. The landscaping in the front was redone to feel inviting and soften the house. “Caroline has a very colorful sense in the interiors, so we worked with her to make sure the outside complemented it, rather than competed with it,” Visconti says.

Indeed, while the Cummings’ former homes boasted muted palettes of cream, yellow and pale blue, they pursued a more vibrant look for their new address. Taking cues from French designers Pierre Yovanovitch and Jean-Louis Deniot, Rafferty enhanced the home’s traditional elements with a more modern look. She chose restrained furniture shapes to balance the trim and moldings and employed plenty of color–a fuchsia reading nook, a purple floral-patterned wallcovering in a guest bedroom–to “wake up” the house. The designer also had to consider her parents’ differing design styles. “My father is much more modern than my mother,” she says. “The work marries those two approaches.” Each parent’s office space, however, keenly reflects their individual taste–pink, purple and Moroccan-inspired for her mother; sleek, smoky blue and lacquered for her father.

While Rafferty’s parents were trusting clients, they weren’t always immediately on board with her plans. Her mother admits she had major doubts about the dining room, a jewel-box space with hand-painted floors, faux-marble wallpaper and a glossy teal trim. “She wanted to hang these balls from the ceiling,” Julie says of the vintage globe light fixtures. “I said, ‘I don’t know. I don’t get it.’ Finally I just decided to allow her to do it.” In this case, daughter knew best. Now, “I think it’s one of the most special rooms in the house,” Julie says. The room also showcases pieces that belonged to Rafferty’s grandmother, including Barovier & Toso sconces and the Maison Jansen dining table. “It was really important to me to integrate those things,” Julie says. “I remember all the wonderful people she entertained at that table, everyone from ambassadors to presidents and governors. It has so much history for me.”

In addition to family heirlooms, the couple’s diverse art collection also shaped the interiors. Julie insisted a triptych of poppies by Bill Beckley be installed in the living area, even though it was too big for the wall. “I love it so much that we took the moldings off the wall and made it fit,” she says. The piece serves as the starting point for the room’s design, a pale blue space with geometric built-ins backed by an antique mirror in a smoky, dark finish. An Enoc Perez painting in the entry, Robert Longo photographs in a guest room and sculptures by Rodin and Donald De Lue in the living and dining spaces are among the other artworks interspersed throughout the home.

Rafferty complemented the art with an eclectic mix of high and low pieces, vintage finds and items she picked up while traveling with Julie. In fact, their buying trips turned out to be a bit too successful. “We kept finding things we loved, and my mother would ask, ‘Where are we going to put this?’ ” the designer recalls. “I would say, ‘We don’t have anywhere to put it, but we should bring it back.’” The additional acquisitions from those trips inspired the mother-daughter duo to open The Grand Tour, their Palm Beach boutique showcasing an array of international objects alongside works by a broad range of artisans.

The store has continued the family collaboration even after the residential project ended. And while the Cummingses once worried their new home might be too big, its size has proved to be a blessing. Rafferty and her family moved in with her parents while their own house–only a few blocks away–is being renovated. Four adults, two children and five dogs enliven the spaces now, and the homeowners couldn’t be happier. “I kid with Caroline,” Julie laughs. “I say, ‘Why don’t you just stay?’ “ 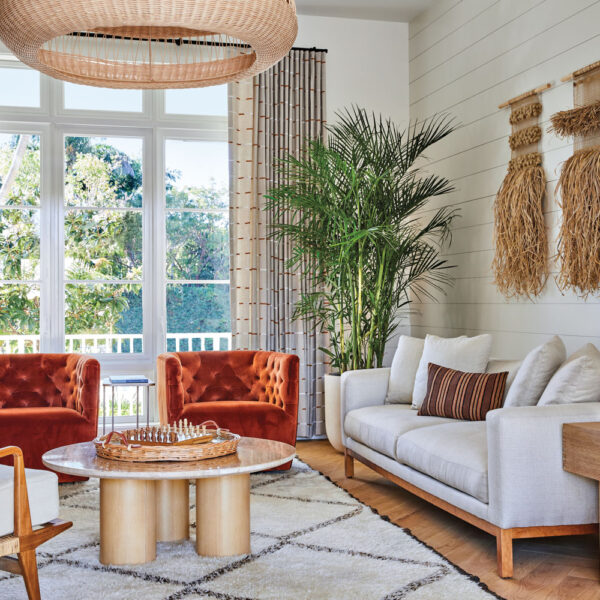 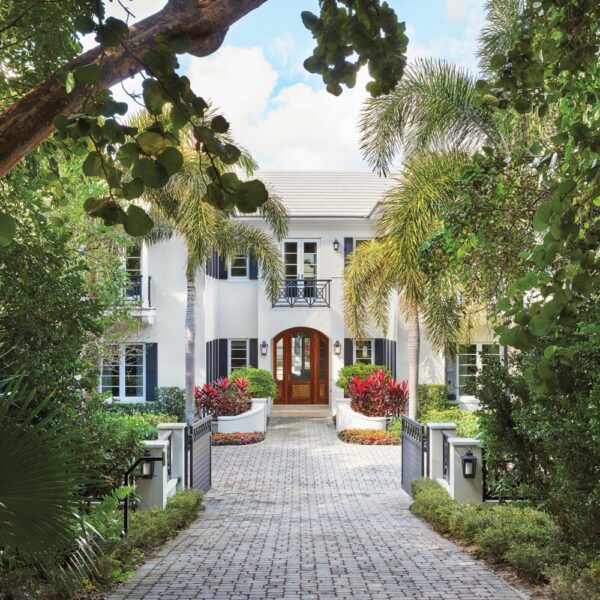 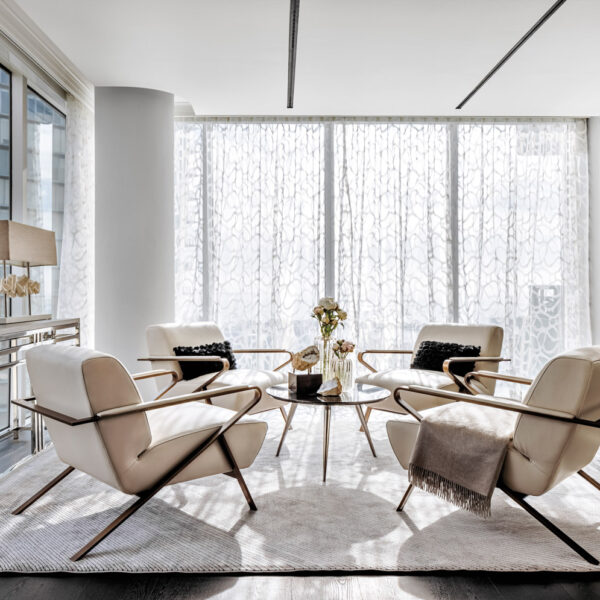 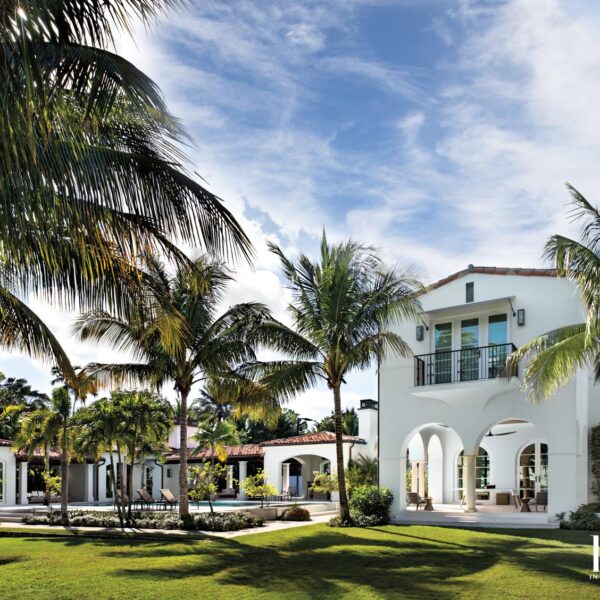 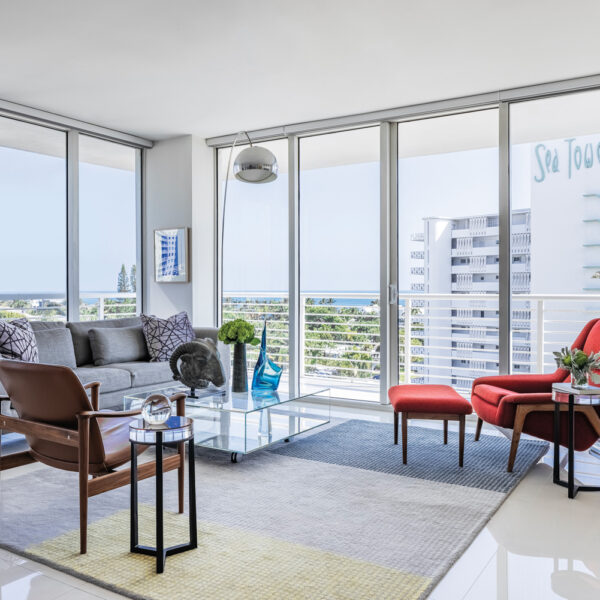