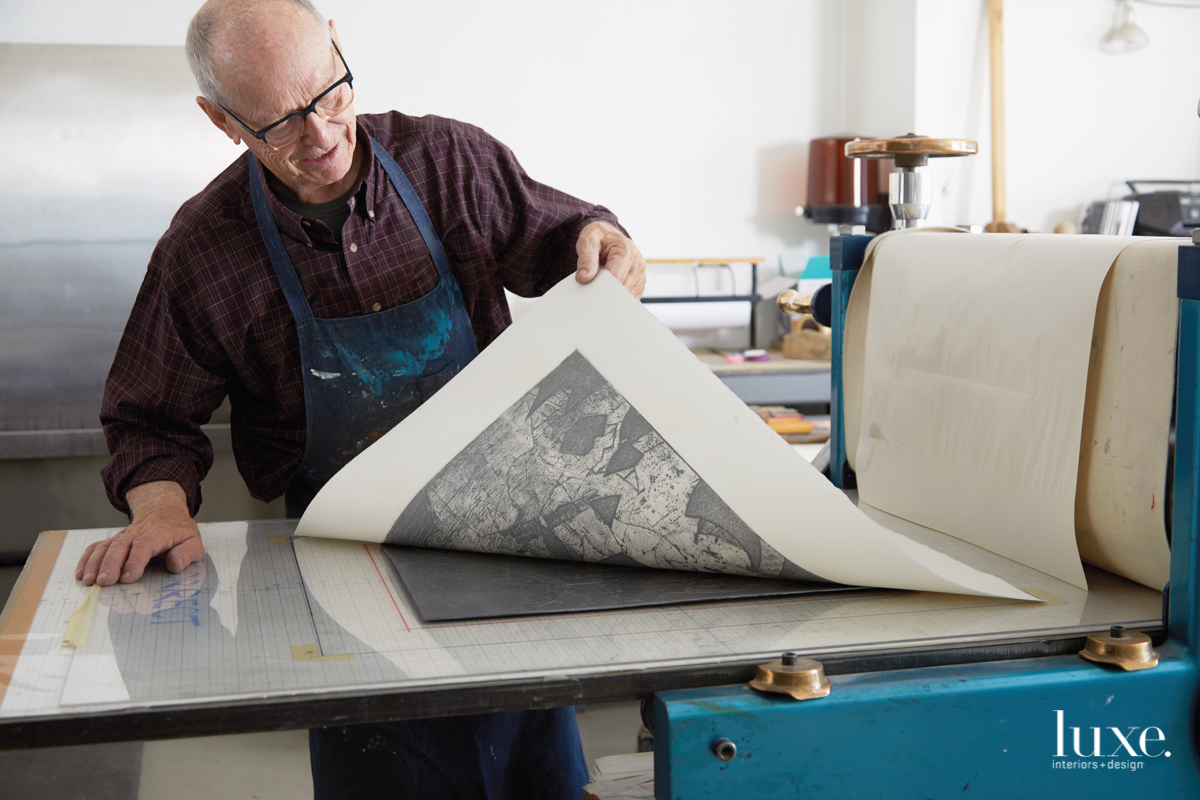 Artists must be aware of the accidental as well as to thoughts and ideas stemming from purposeful activities,” Armstrong observes.

Artist John Armstrong finds that living in the Southwest brings plenty of advantages–notably, the abundant sunlight, and, subliminally, the singularity of the desert shapes, such as the cacti and succulentsÂ and rock formations that can inspire his forms. “Finding abstract shapes that are new and interesting is difficult,” the artist observes. 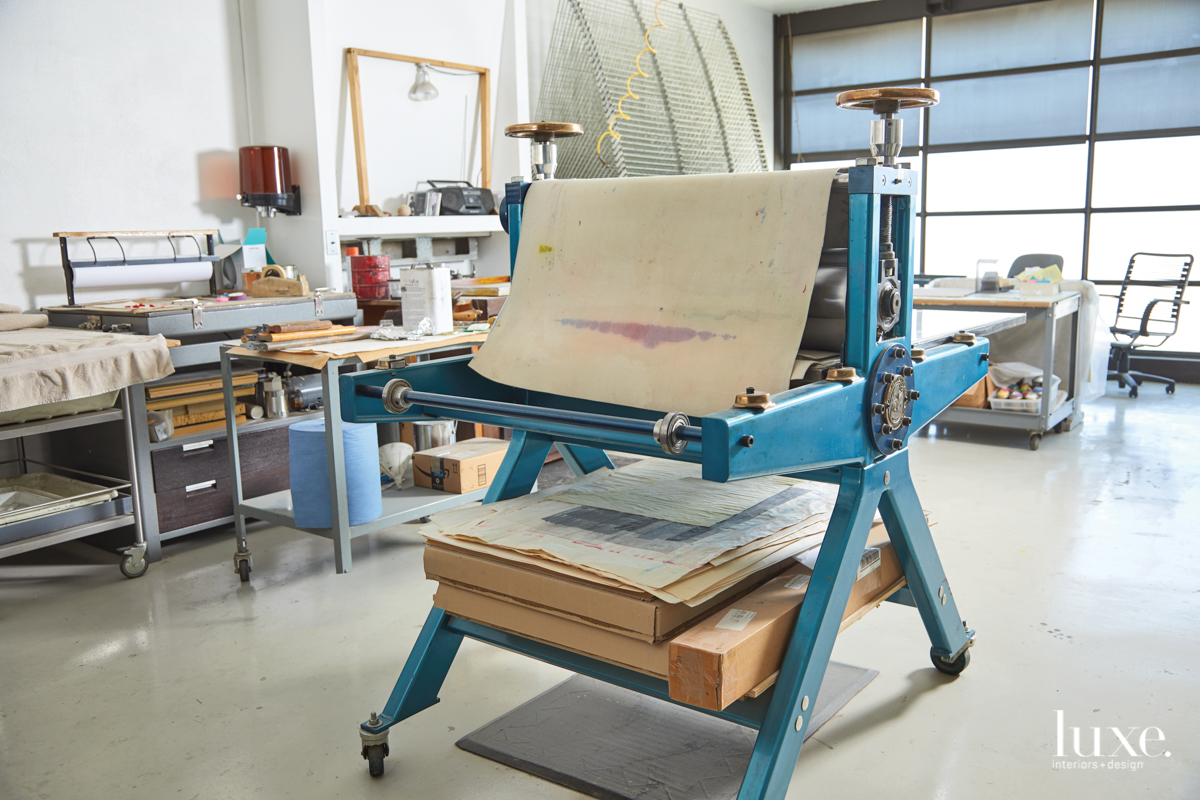 An etching press has pride of place in the studio where Armstrong, a master print maker, works.

An etching press has pride of place in the studio where Armstrong, a master print maker, works. 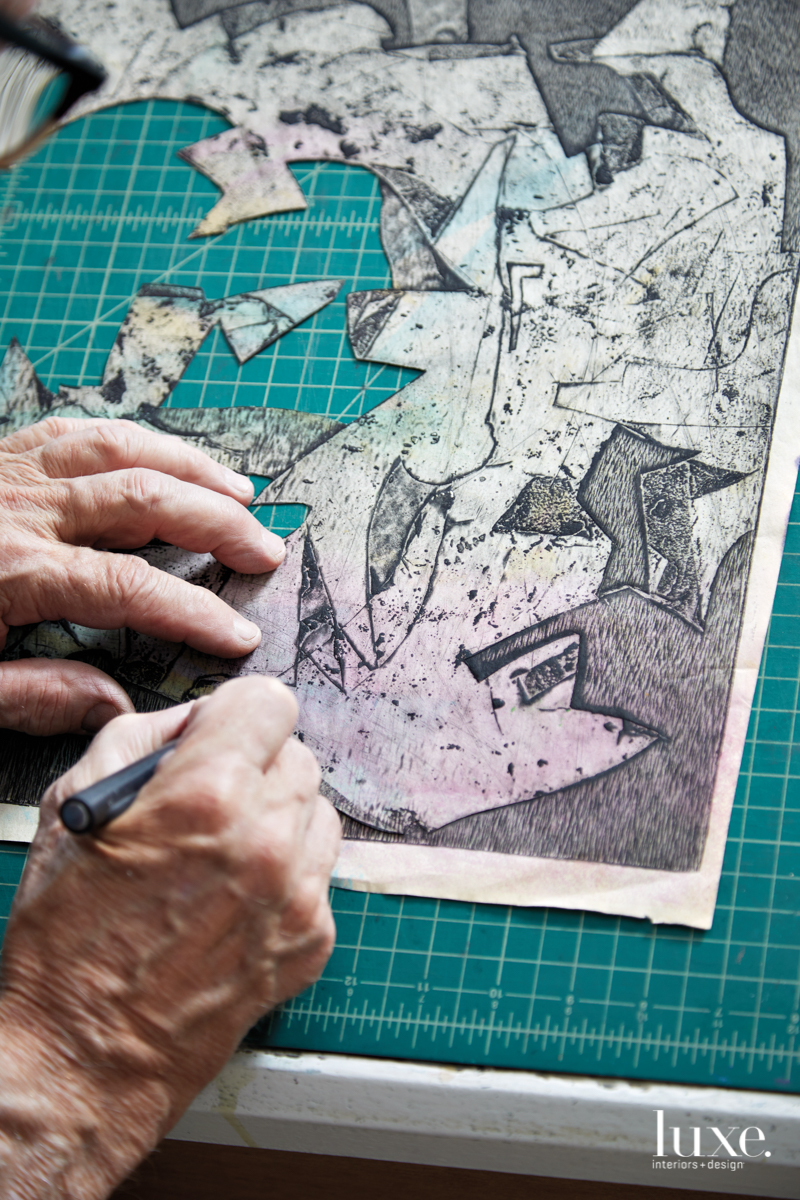 The artist cuts shapes that will be layered in his works.

The artist cuts shapes that will be layered in his works. 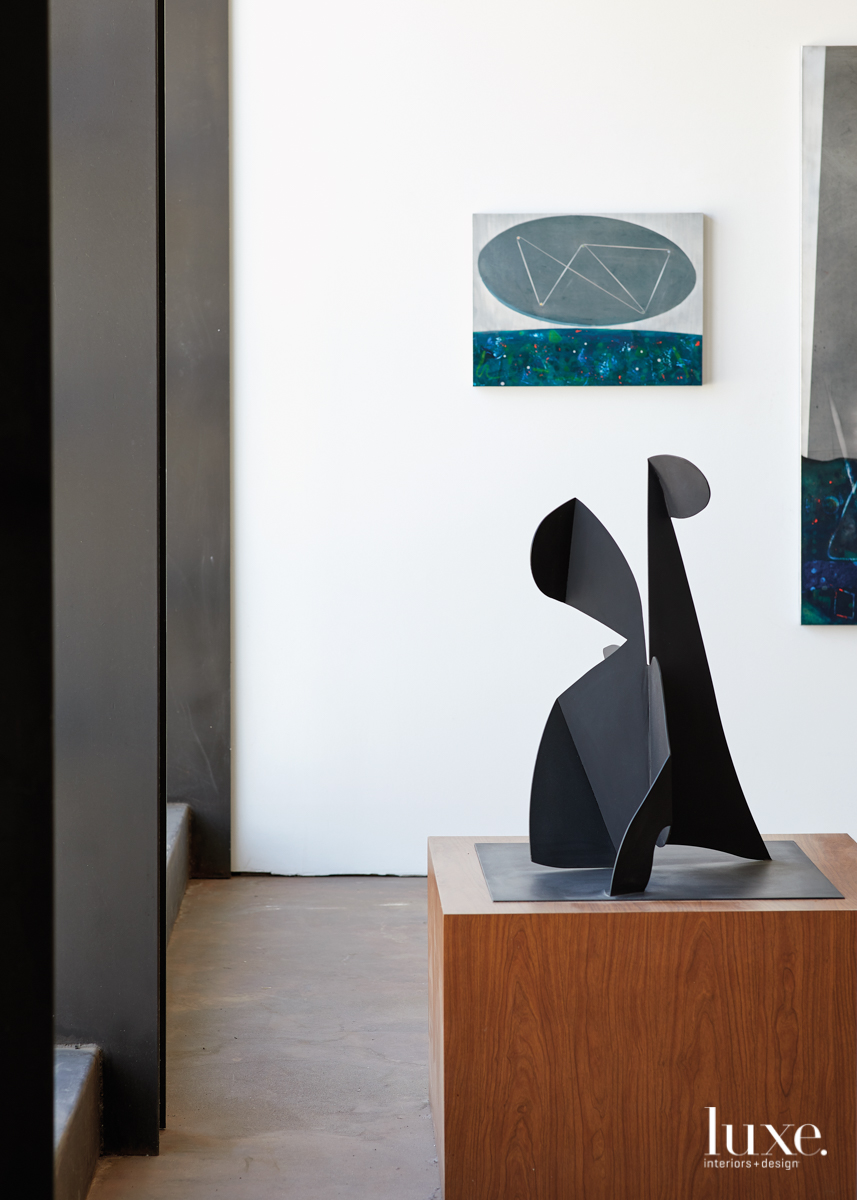 A welded steel sculpture reflects "my personal vocabulary of shapes that keep showing themselves in my work," Armstrong notes.

A welded steel sculpture reflects "my personal vocabulary of shapes that keep showing themselves in my work," Armstrong notes. 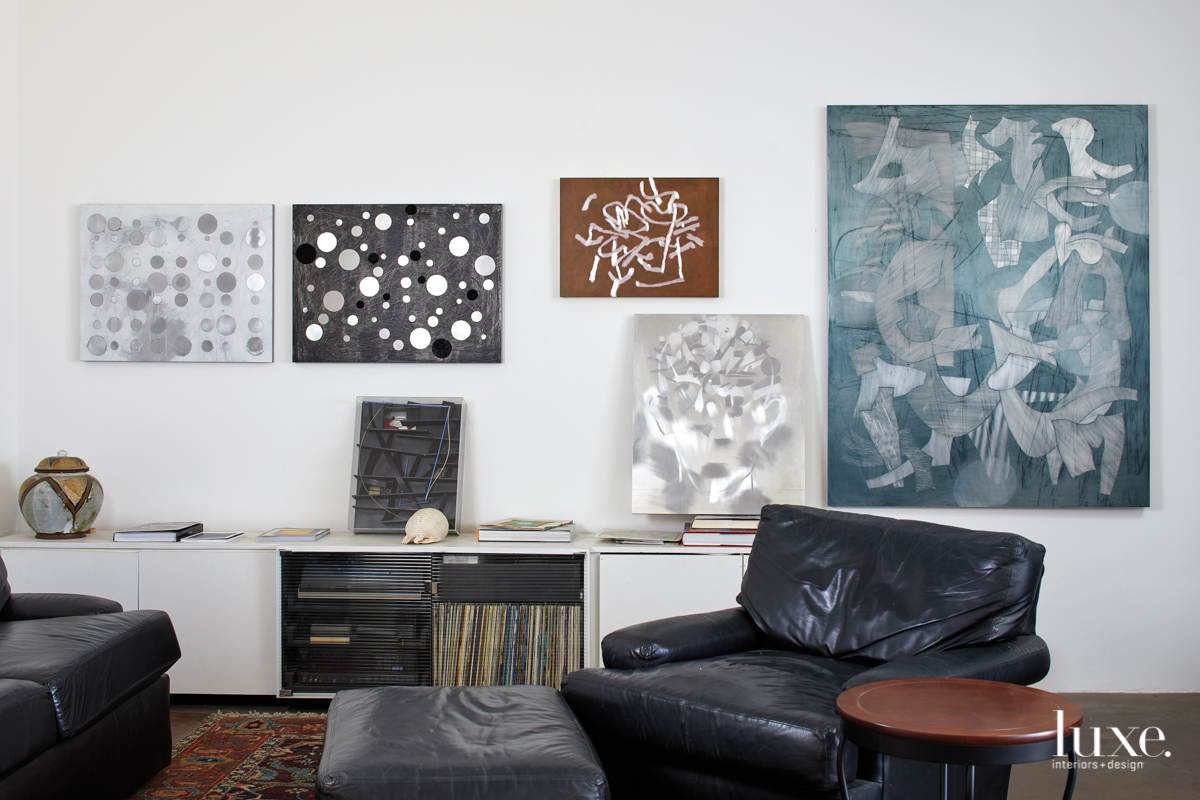 Abstract shapes appear to glimmer as they catch the light in the aluminum work of Scottsdale artist John Armstrong.

Abstract shapes appear to glimmer as they catch the light in the aluminum work of Scottsdale artist John Armstrong. 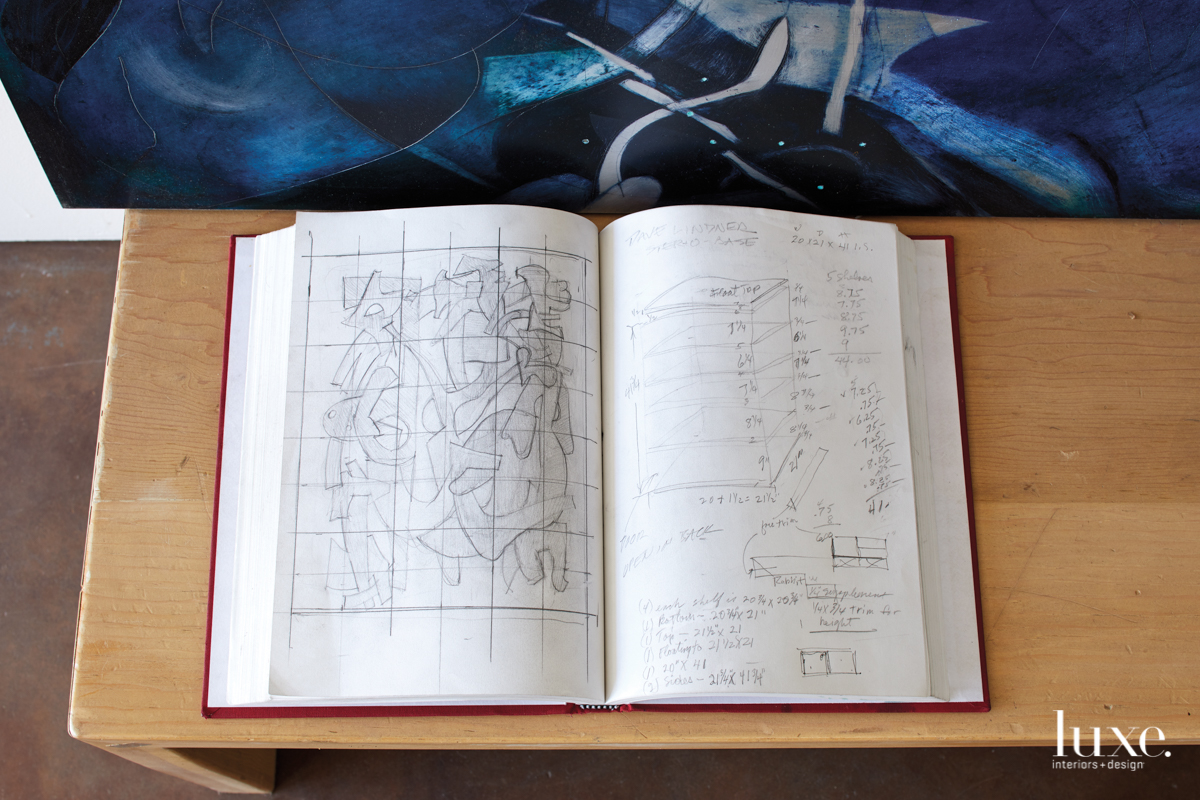 Armstrong’s recent work is especially responsive to all that Arizona sunlight. Using “drops,” or remainders, of aluminum that he buys from an industrial metal supplier, he covers a panel, then creates forms of contrasting hues and reflectivity by rubbing the surfaces with a range of abrasives: steel wool, kitchen pads or sandpaper in varying grits. “They become studies in gray,” he explains. “With different lighting on them you get more blues. I use knives if I want to plow through the material so it catches more light. The pieces become participatory because the hues change as you walk by them.”

Working spontaneously to create forms that eschew representation, Armstrong often starts by responding to existing marks in the aluminum. “I have a philosophy I call ‘engaged abstraction,’ ” he says. “I try to be open to and aware of the process to explore and utilize possibilities as they present themselves.” He often retrieves discarded work to discover accidental marks, finding the trash to be “freer and more exciting than the original idea.”

Trained in printmaking, Armstrong worked with paper, canvas and plywood before turning to aluminum. His longtime studio in Scottsdale has a place to weld, another to frame build, and a room for matting and cutting. He welcomes visitors, and his studio has a grand piano, although neither Armstrong nor his wife, fellow artist Joan Prior, play it–all the more reason for others to drop by and tickle the ivories.

An avid traveler, Armstrong revels in soaking up as much art as possible, from Conrad Marca-Relli to R. B. Kitaj to Francis Bacon. That said, inspiration comes from everywhere; even something as mundane as spilled liquid holds the tantalizing suggestion of a new shape.

Seeking the new has always been a priority for Armstrong, who moves on to fresh techniques within a matter of weeks or months. “I’m like a mad scientist,” he confesses. Lately, he’s been bringing his experience as a printmaker to bear on his aluminum pieces, adding pigment to create luminosity and depth at the initial stage, or applying single veneers between rubbings. “The subtlety is greater,” he says, noting that his process remains fluid–always changing, always open to chance. “Things appear and disappear and rehappen,” Armstrong says. “I’ve selected a path that is to discover new things, and I’m always trying to reinvent myself–not radically, but there must always be a sense of progression.”