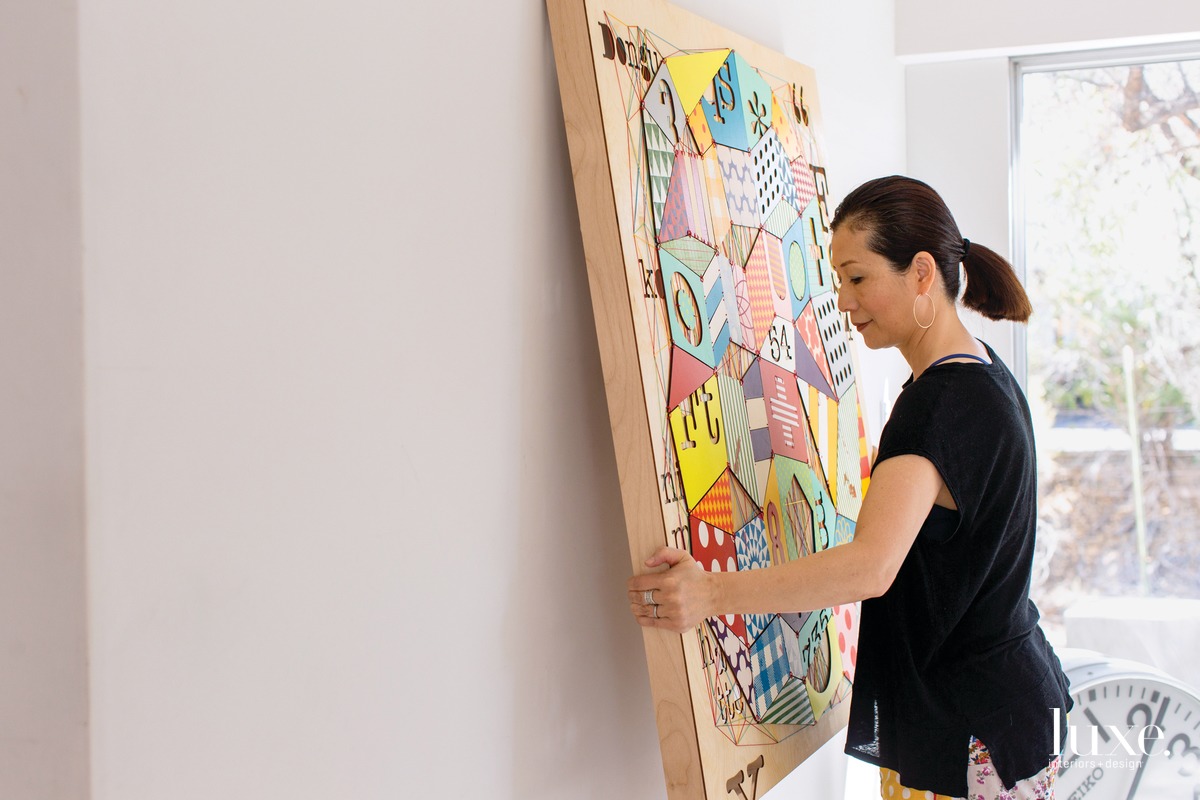 A former graphic designer, Takamura creates her works digitally, then has the pieces laser-cut.

Painting a Hershey’s chocolate bar in a class at Paradise Valley Community College didn’t strike Kaori Takamura as a very auspicious beginning to her new life as an artist. Having left her successful career in graphic design in search of creative fulfillment, “I just wanted to paint,” she recalls. “But when I brought the piece home, it didn’t feel right, so I applied machine stitching. It had a magical effect, giving a sweet, melancholy emotion to the painting. The instructor was shocked.”

More than a decade later, colorful thread remains a defining element of the artist’s work. Takamura’s recent pieces, 45- to 50-inch panels, feature plywood shapes painted in cheeky color combinations–like lime, scarlet and sunflower–“stitched” together in ways that conjure up Americana quilts, their mischievousness accentuated by the sophistication of their craftsmanship. The works meld the quotidian and sublime into something strikingly beautiful, yet with a childlike sense of wonder. 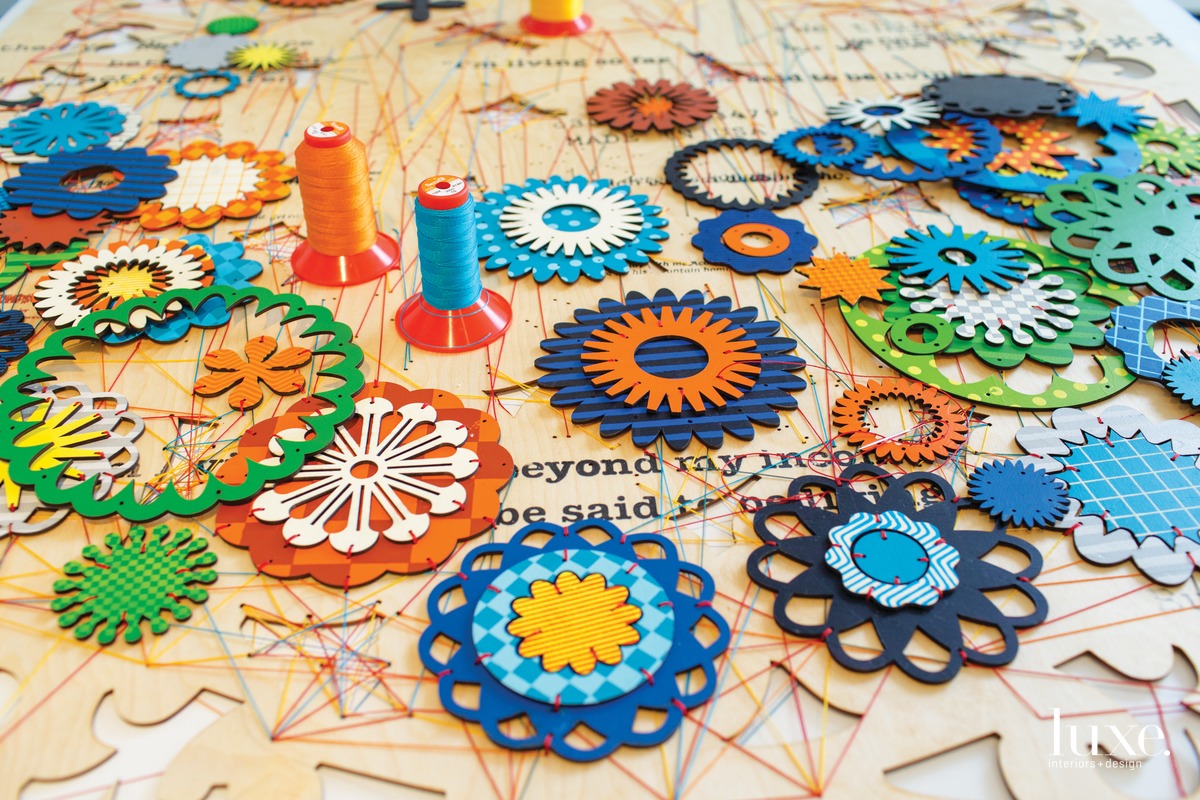 Painted shapes and threads form a work in progress.

Painted shapes and threads form a work in progress. 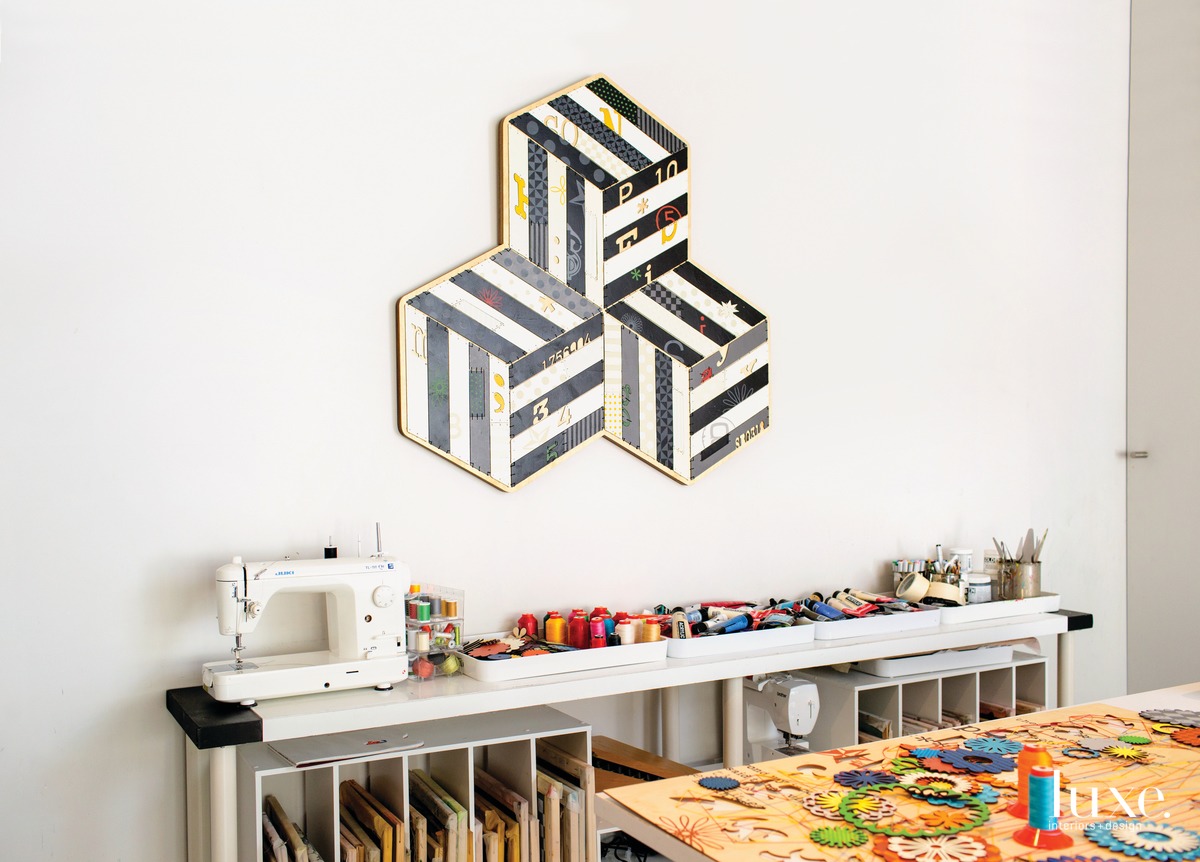 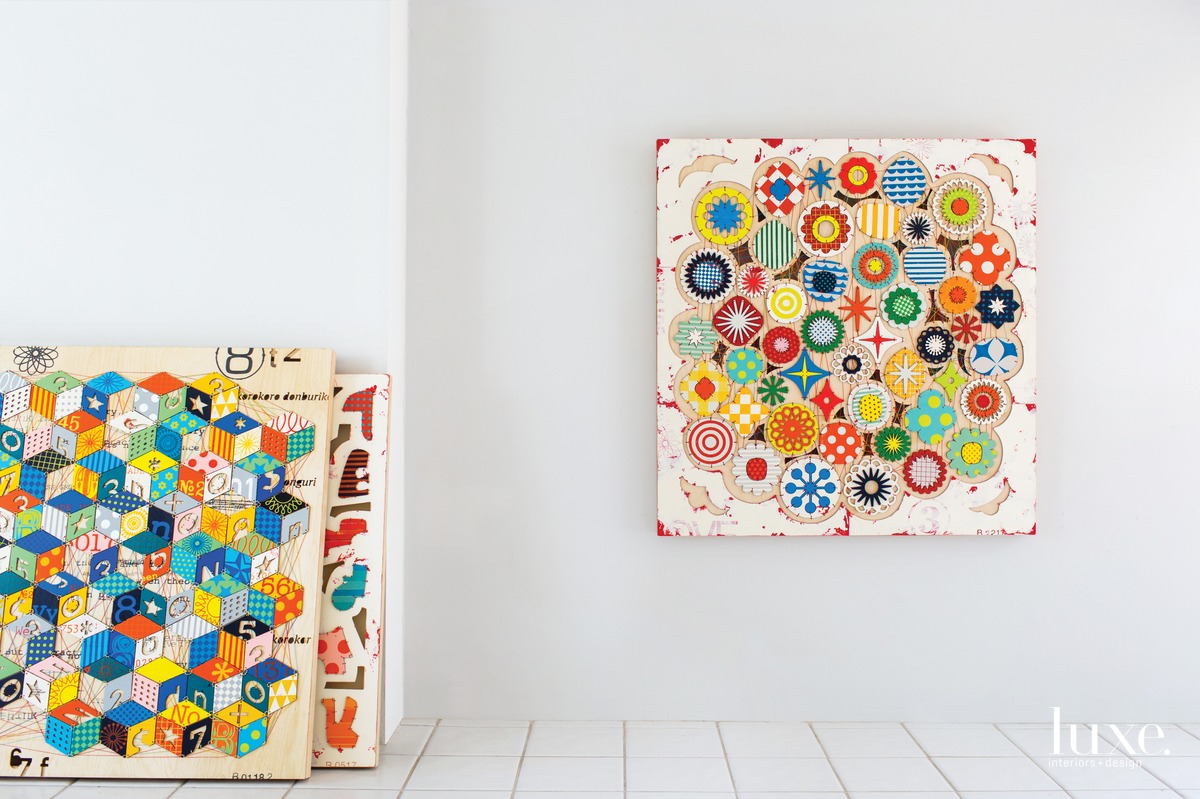 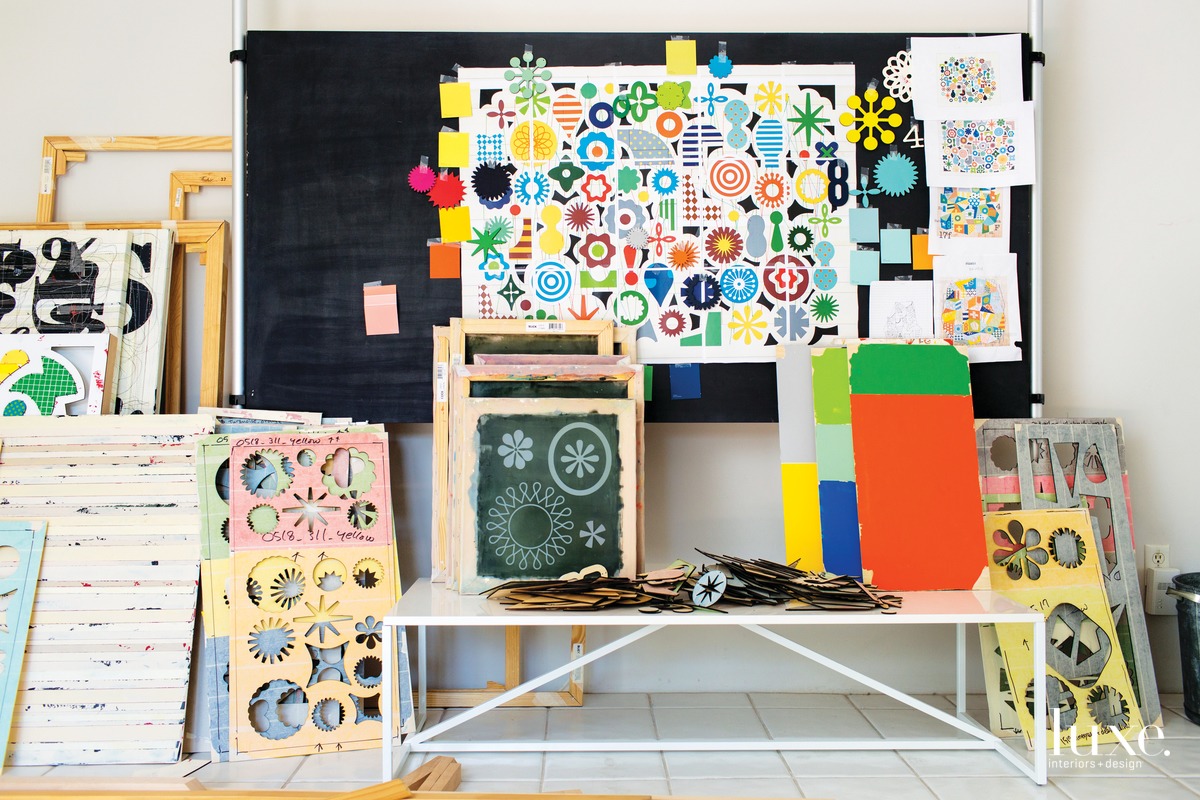 A print-out of a design for Between Shapes 1018 hangs in her studio.

A print-out of a design for Between Shapes 1018 hangs in her studio. 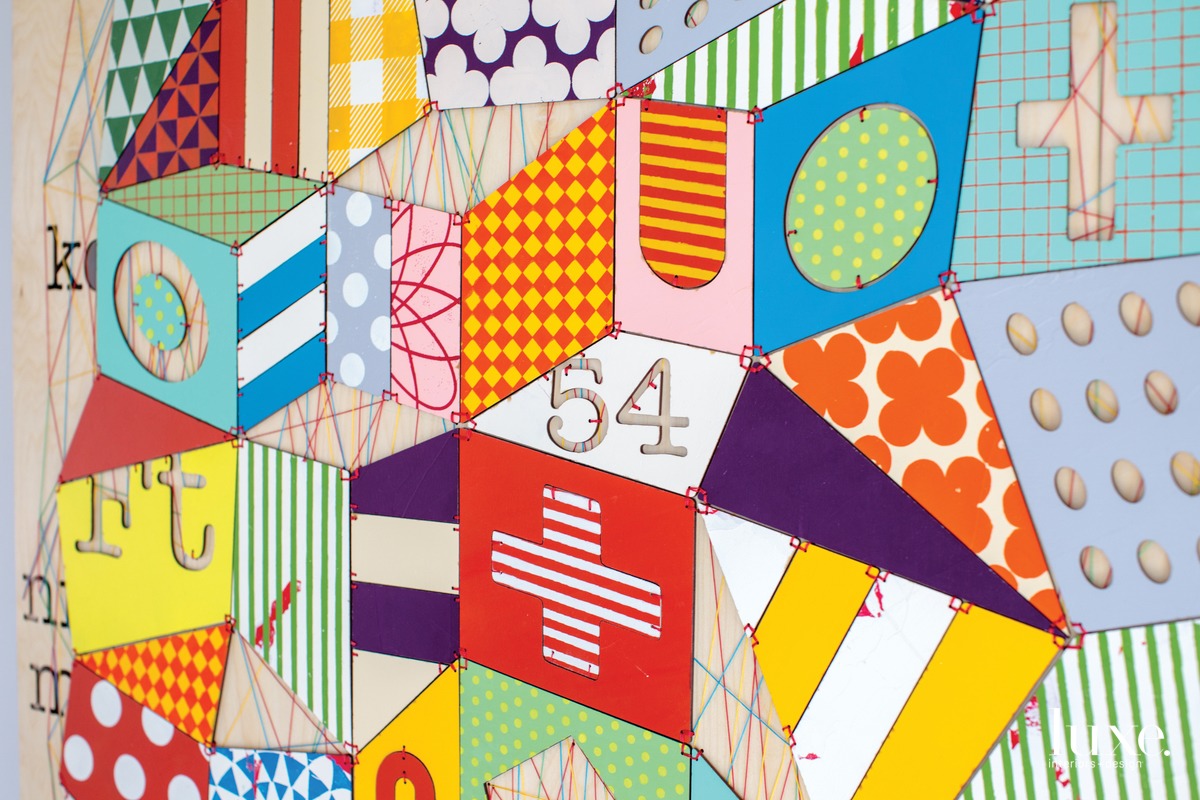 A more recent piece reflects the vibrant use of color that characterizes her current catalogue.

A more recent piece reflects the vibrant use of color that characterizes her current catalogue. 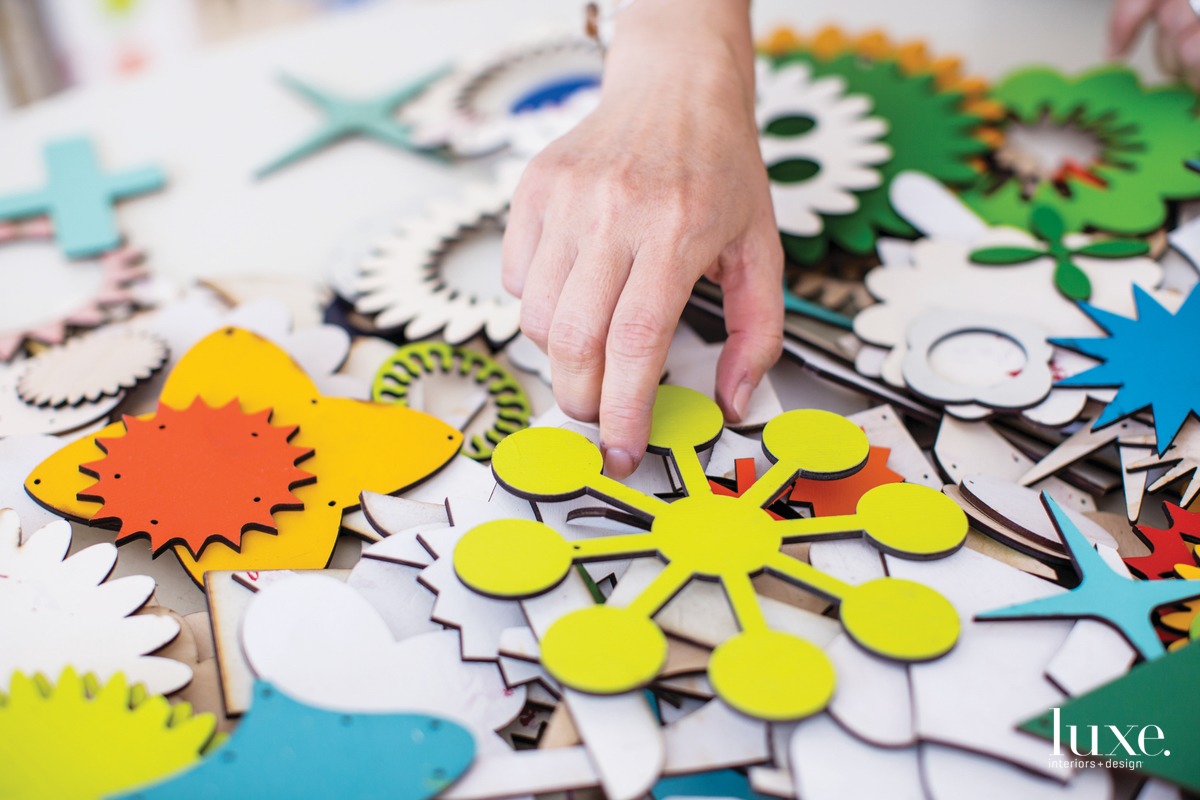 A yellow shape "reminds me of the 1960s patterns from my childhood," she says.

A yellow shape "reminds me of the 1960s patterns from my childhood," she says.

Working out of a studio in her modern home near Scottsdale–by midcentury architect Al Beadle–Takamura executes stitching like she would a brushstroke. “When I apply the thread, there’s a nostalgic emotion, and it somehow expresses what I’m feeling,” she says. “When I was a child and had a hole in my pants, rather than buying new ones, my mom would patch it. I really liked that. You have more attachment to your things.”

The artist’s use of wood, meanwhile, has evolved over the last three years. Takamura had experimented with laser-cut canvas pieces, but “the surface was too flat,” she recalls. Wood promised a more three-dimensional look. “I’m not afraid to change,” she says, a quality also evidenced by her moves with her husband over the years between Japan and the United States.

Fittingly, Takamura’s artistic process incorporates her background as a graphic designer: After creating rough hand sketches for a piece, she scans the drawings into a computer. “I decide everything–including the layout, color and shape–on the screen first,” she says. The geometric shapes, often inspired by the 1960s patterns of her childhood, are then laser-cut out of 1/8-inch birch plywood and painted with acrylics. “I try to choose colors that have a more vintage feeling–a little bit yellowish,” she says.

Takamura’s inspirations are manifold, with a heavy element of folk art–including Mingei from Japan–as well as American Pop art, Scandinavian design and the dynamic textiles of Chicago sculptor Nick Cave. Having appeared in group and solo shows across the country, the artist is represented by Gebert Contemporary; Meyer Gallery in Park City, Utah; and Long View Gallery in Washington, D.C.

That early art teacher who was astonished by Takamura’s stitching wouldn’t be surprised by her success. “He suggested I take art more seriously,” she recalls. “So I did.”