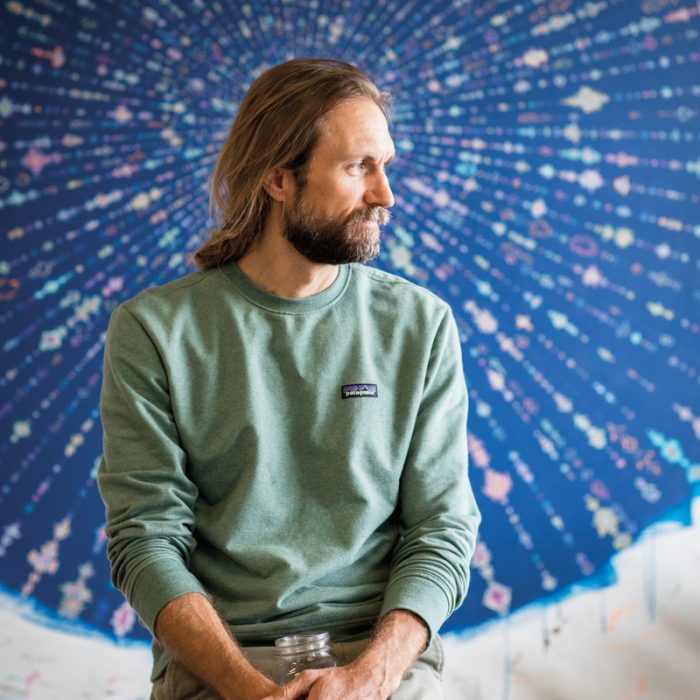 Among the open skies and ocean vistas of the California coastline, it’s easy to forget the invisible drama beneath the surface–a world of microbes, molecules and chemical reactions that sustain and devastate life in equal measure. This realm takes on epic proportions for San Diego artist Kelsey Brookes, whose work explores the atomic dimension in kinetic color.

Portraying microscopic matter proved natural for the former biochemist. “I spent years in that world, learning the interactions between this invisible cast of characters,” says Brookes, however, he adds, “I was always interested in art outside of my science life. I reached a turning point, when I had to decide whether to continue, or do something different.” 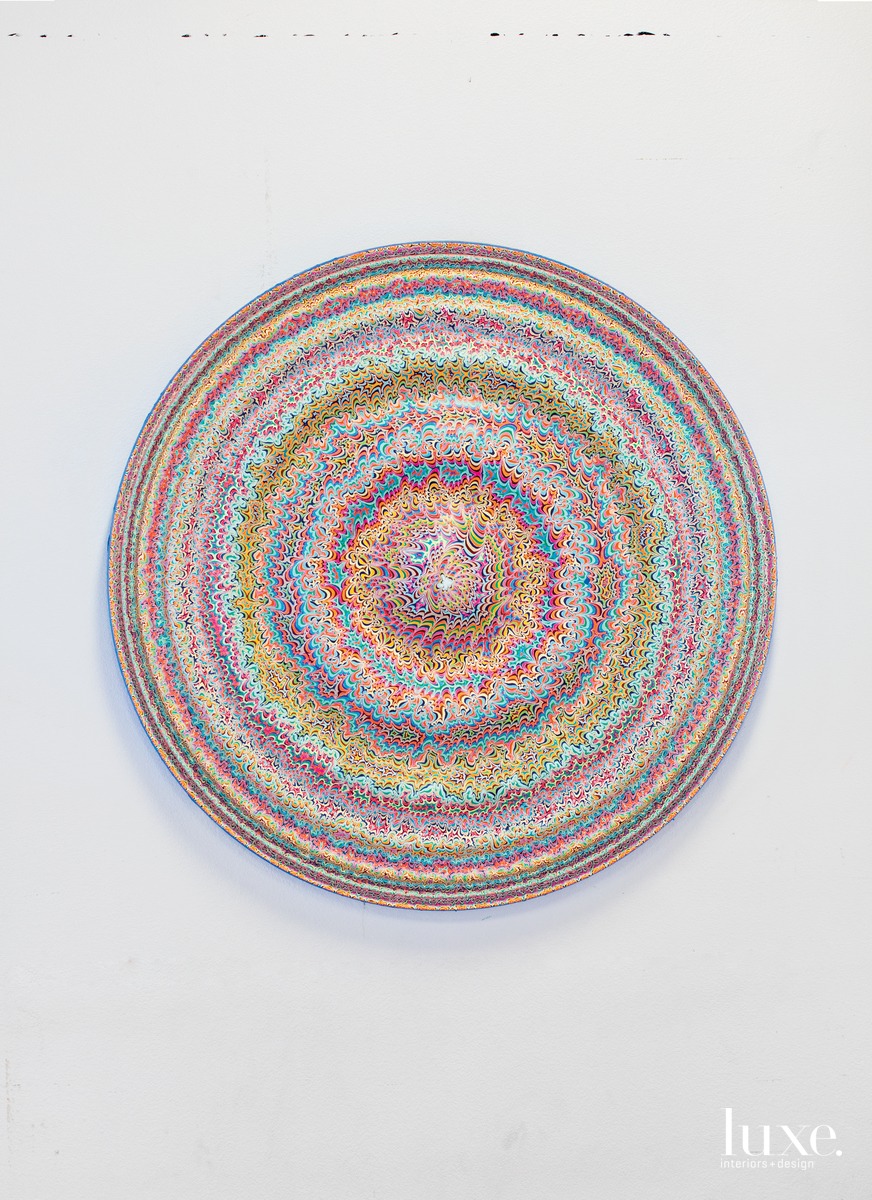 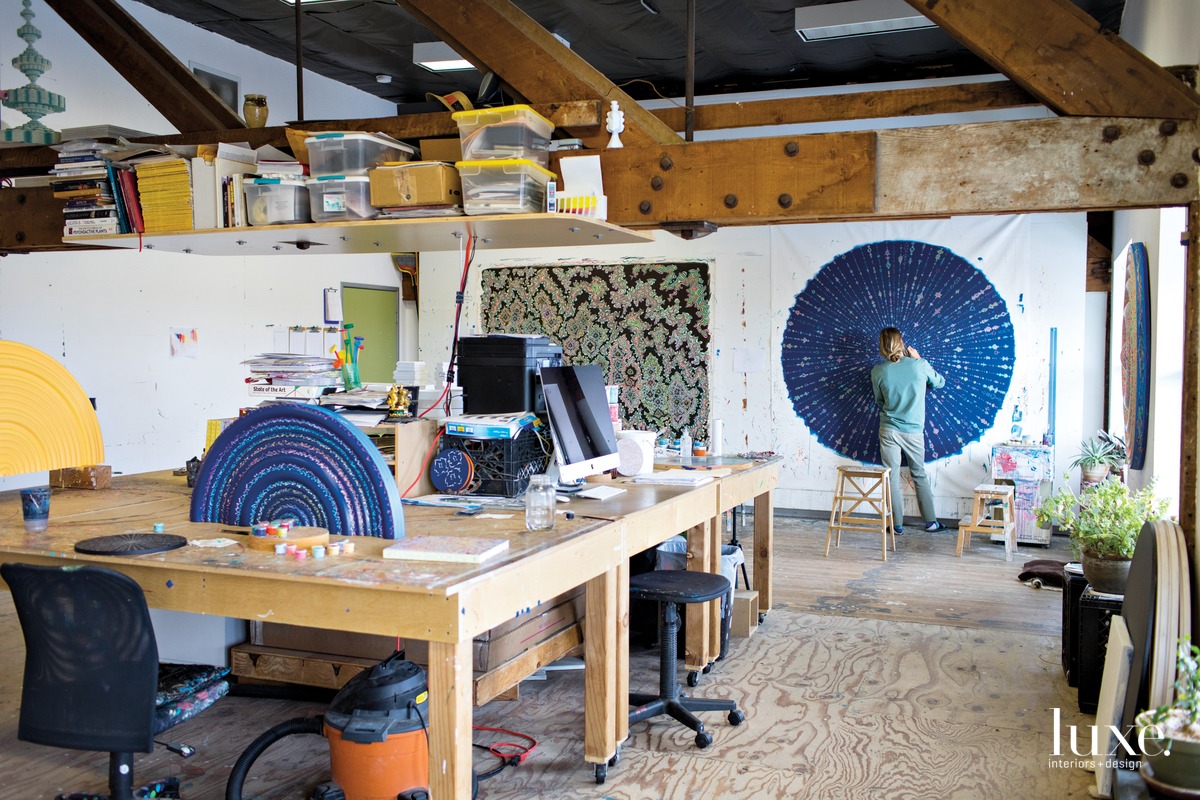 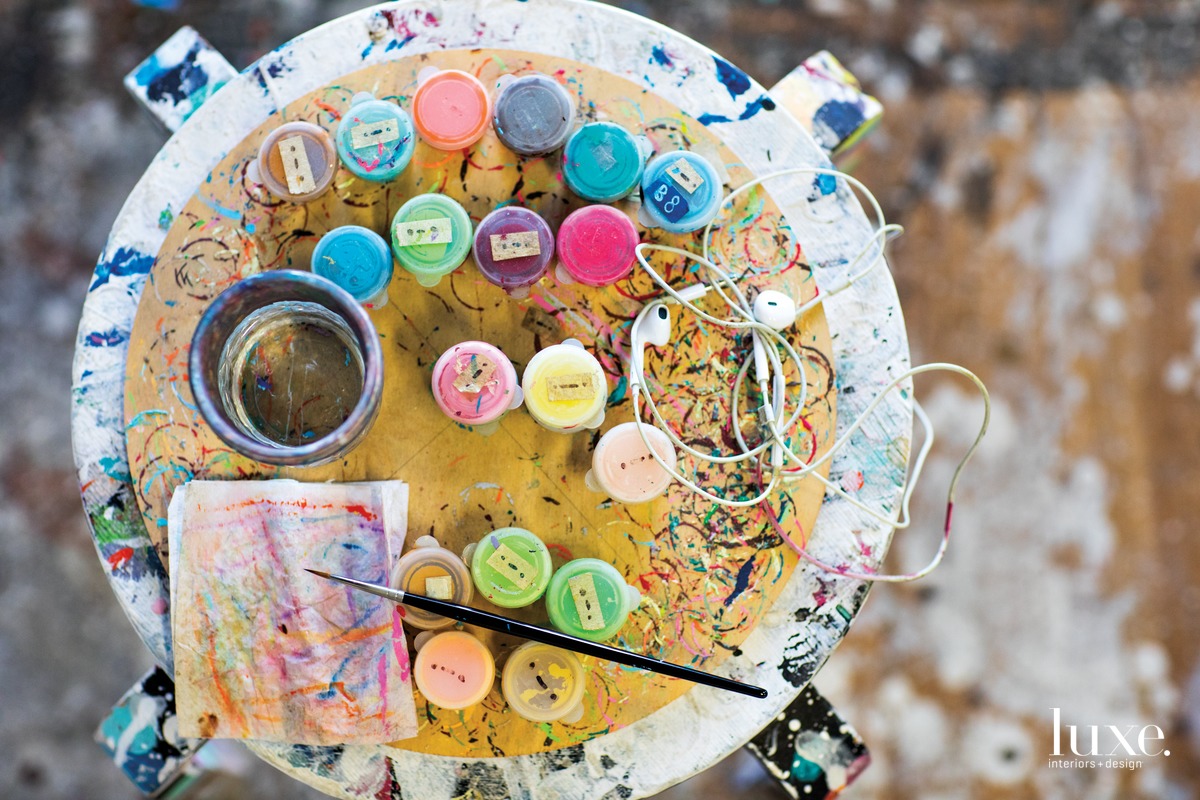 On the nearby work table are parts of his sculptures. To make the fine lines in his paintings, Brookes often uses round brushes of about a millimeter

On the nearby work table are parts of his sculptures. To make the fine lines in his paintings, Brookes often uses round brushes of about a millimeter 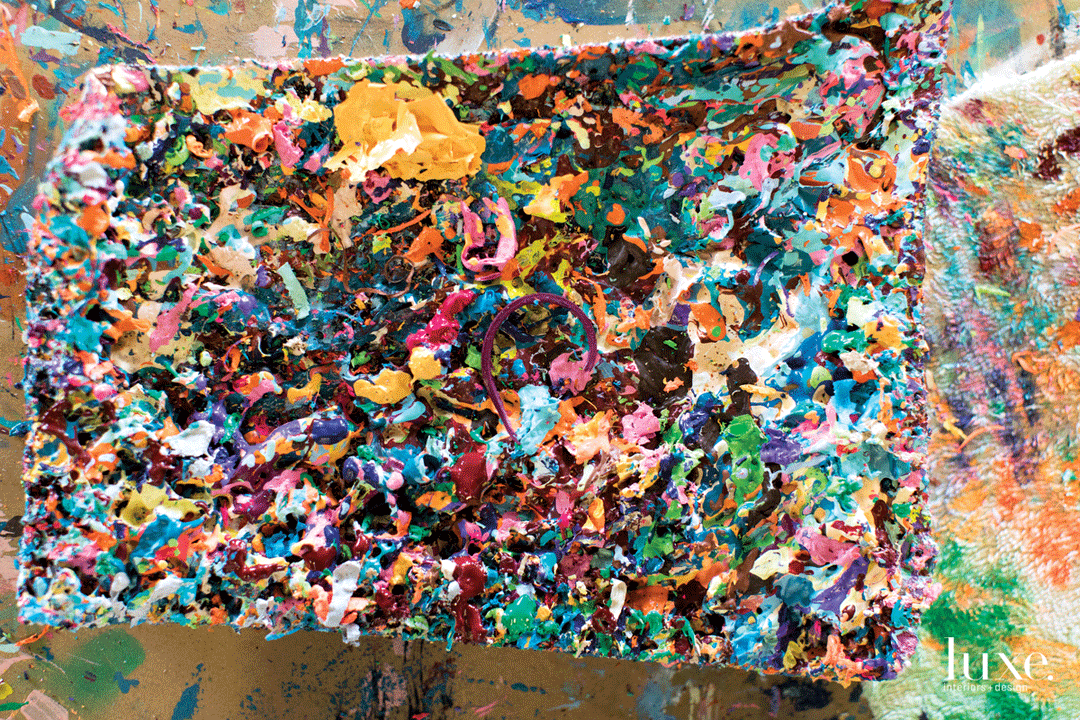 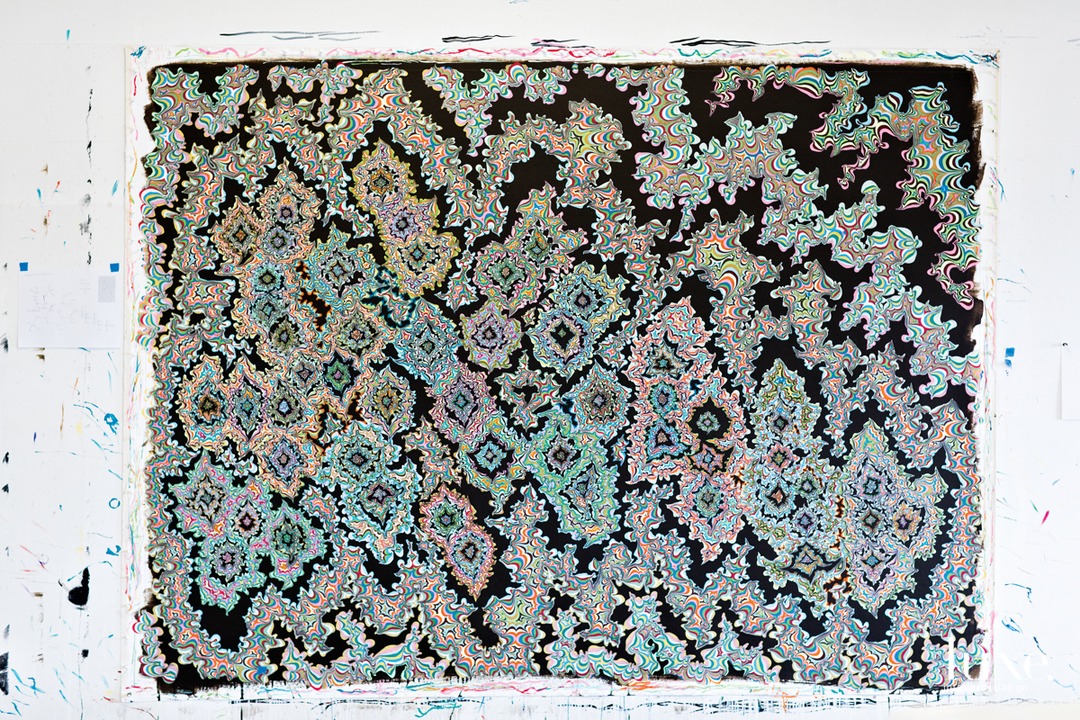 the painting CBD is a to-scale model of a CBD molecule.

the painting CBD is a to-scale model of a CBD molecule. 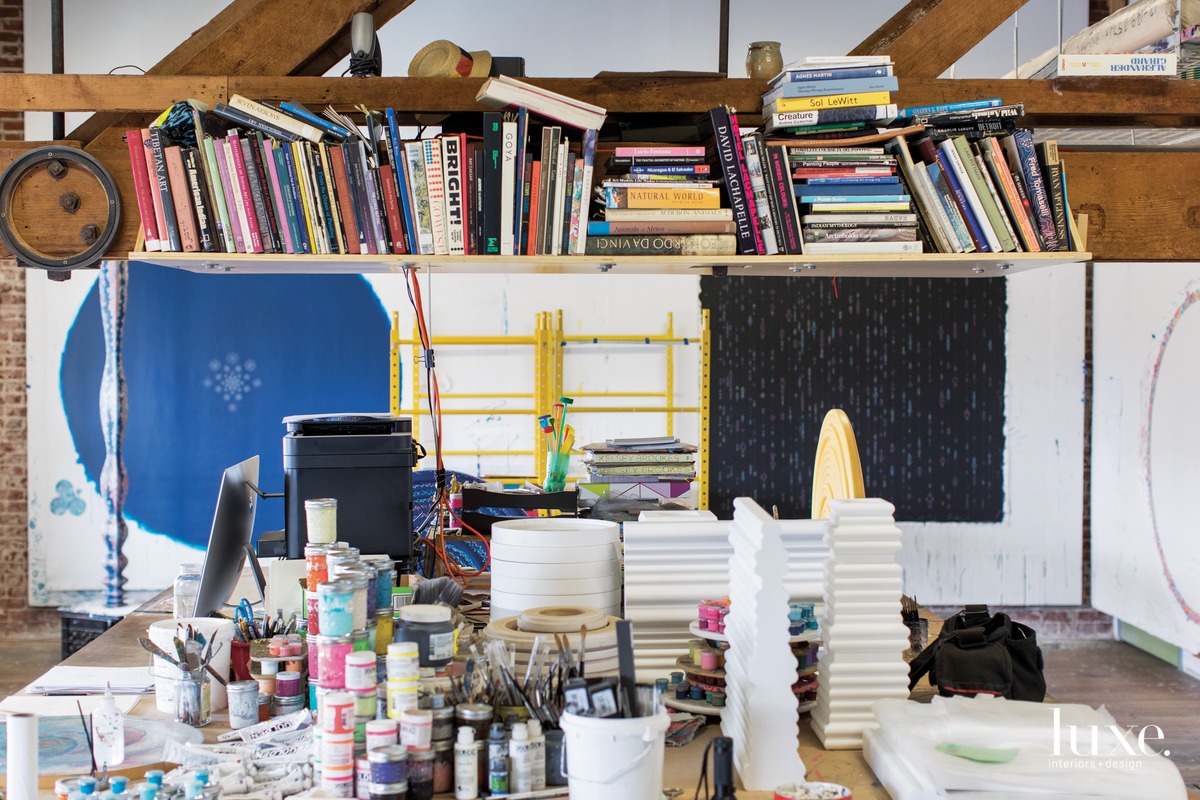 Further experiments evolved into his Fibonacci sequence series, based on the mathematical principle of the same name. The sequence creates geometric patterns that occur throughout nature, from cactus growth spirals to DNA. “It’s so interesting how life organizes itself using these numbers, like an invisible, underlining thread tying everything together,” says the artist. “I wanted to make visual this hidden force that moves life itself.” In his Fibonacci paintings, Brookes uses the formula to measure and paint concentric circles, growing incrementally over his massive canvases.

His sculptures express Fibonacci numbers with towering totems and circular panels, carved with rippling waveforms. Following the sequence’s measurements, the expanding waves are cut into wood using a CNC machine. Brookes sands and gessoes the forms, then paints more undulating Fibonacci waves. “Each series starts with a broad, underlying concept that holds everything up. Then I layer the aesthetics over this rigid structure,” Brookes explains. “I’m always looking for balance between the objective and the subjective, the science and the art.”

For his upcoming fall show at Quint Gallery in San Diego, Brookes’ latest Fibonacci pieces explore the geometry of viruses. “I wondered if there was a way I could take the world of math and tie that into my interest in chemistry and biology,” says the artist. “I love the idea of looking at viruses in a humanist way.” The result is part sculpture, part painting, incorporating three- dimensional panels cut into the shape of viruses, from helical rabies to elongated smallpox. Brookes then paints his Fibonacci rings around the outline, “so the virus has a halo that’s psychedelically colored but is mathematically created.”

Though exploring a new direction, the artist sees the virus pieces expanding from his previous work. “I think of my ideas as an evolutionary process. I may get bored, but once I add to that idea, it becomes interesting again,” says Brookes. “Then the process repeats, like a natural selection going on inside my head, constantly pushing for more diversity.”