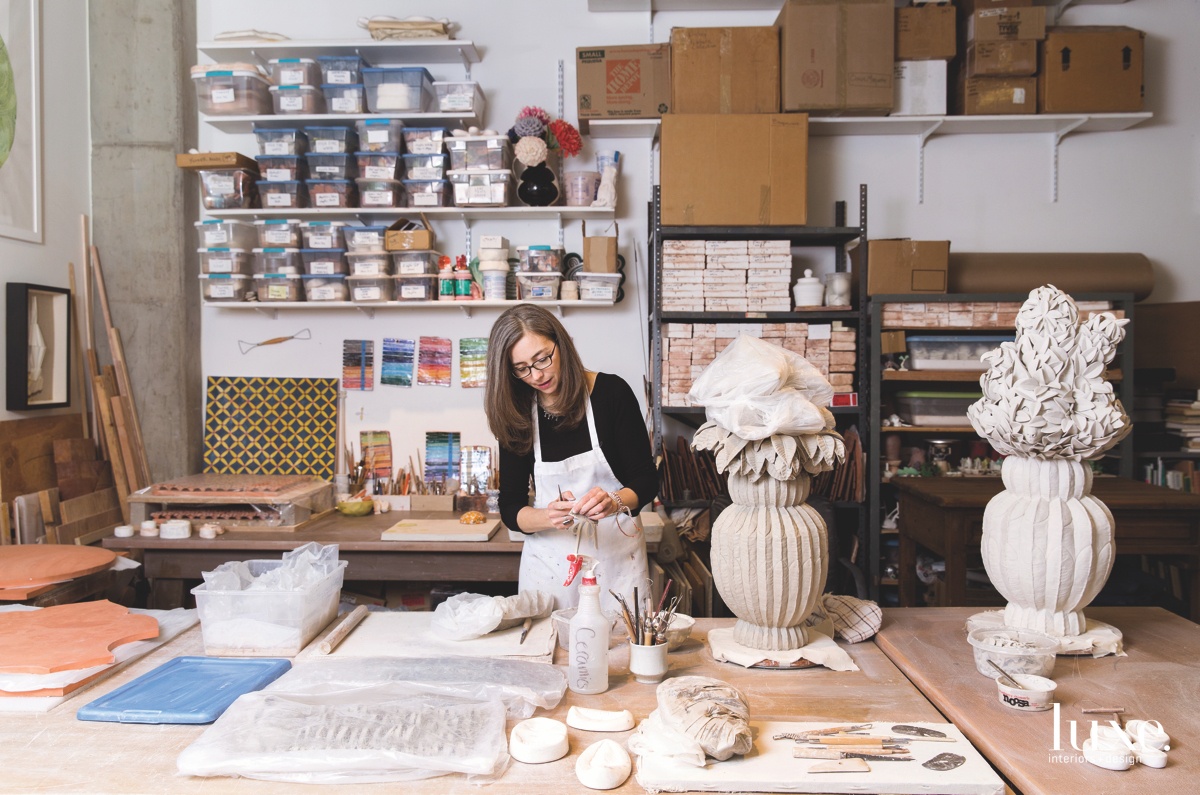 In her Boulder studio, artist Kim Dickey builds and assembles works of abstract potted shrubbery, one with animal faces peeking through (at right).

ll gardens, of any kind, represent a theatrical engagement in the world–an illusion that transports us outside of the real and into the ideal,” says Kim Dickey, an artist and professor at the University of Colorado Boulder. Aiming to explore the dichotomy between nature and culture, physical and psychological, Dickey creates fantastical ceramic sculptures, both handheld and monumental in size, that invite contemplation. “Gardens can be about two kinds of landscape: the landscape of interiority and of exteriority simultaneously,” she explains of the concept behind her artwork. “They also represent, for many people, a cultivated place of freedom within the confines of domesticity.”

Dickey, who is based in Boulder and represented through Denver’s Robischon Gallery, came to her muse and her material of choice at an early age. “I was incredibly lucky,” she says of discovering clay at the age of 12. “I developed an immediate crush and realized there was something so exciting and unique about it.” Growing up in a household where the arts were encouraged and appreciated was also influential, as was having a mother who is a serious gardener. “I spent a lot of years on my knees weeding next to her,” Dickey recalls. “I began to not only understand how she thought about the garden psychologically and aesthetically, but I also developed a language of form.” 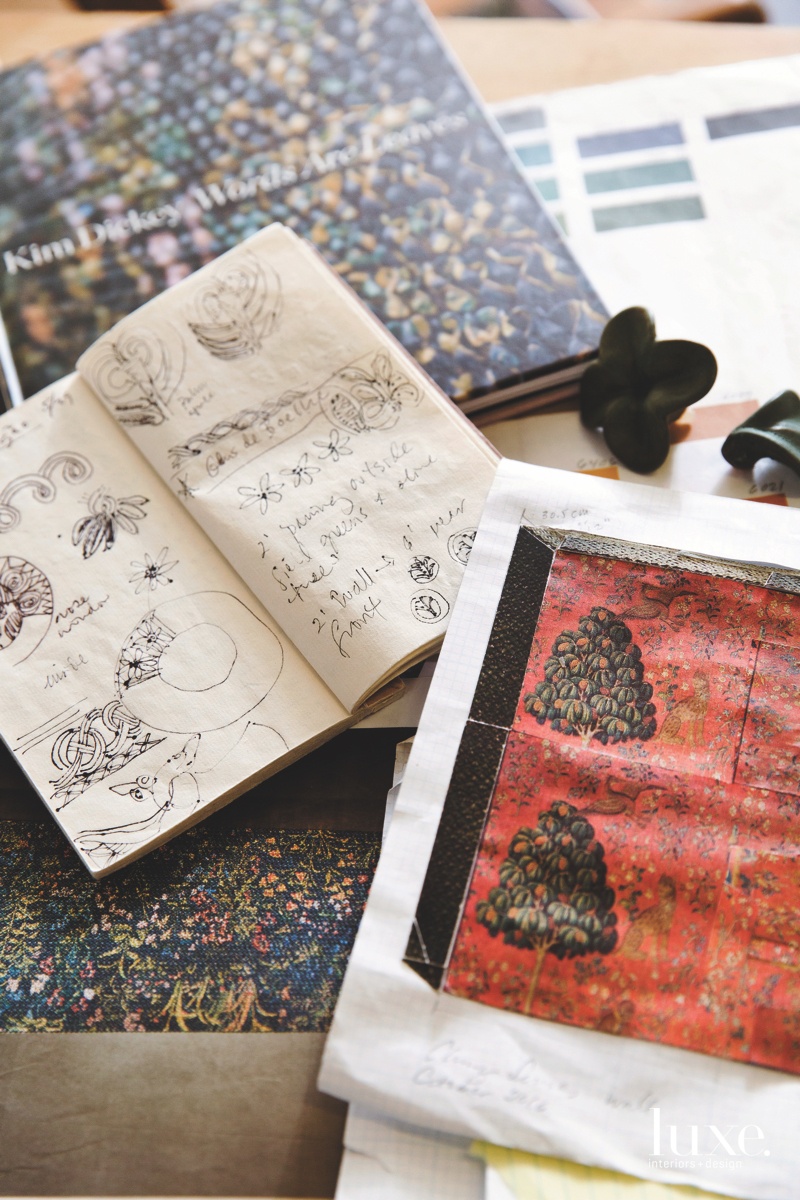 Kim Dickey uses a sketchbook for drawing and thinking through ideas for new pieces.

Kim Dickey uses a sketchbook for drawing and thinking through ideas for new pieces.

The artist works on a large majolica tile painting.

The artist works on a large majolica tile painting. 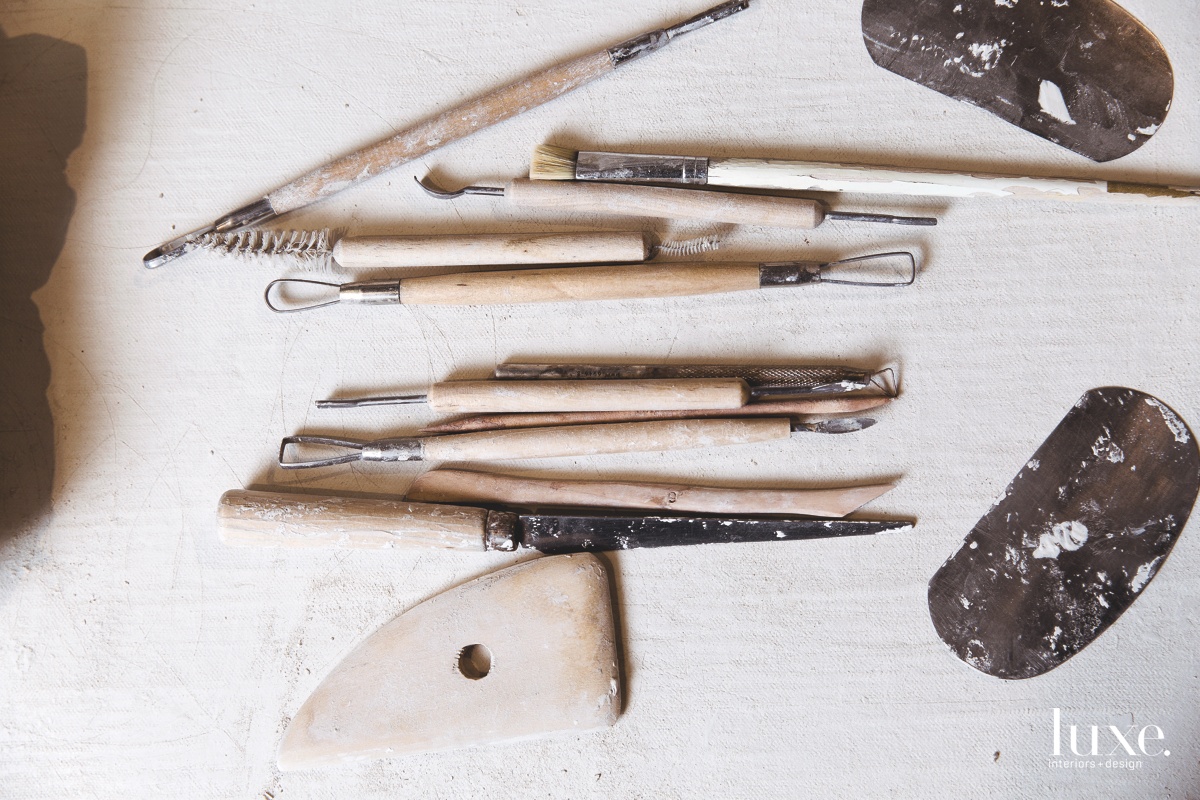 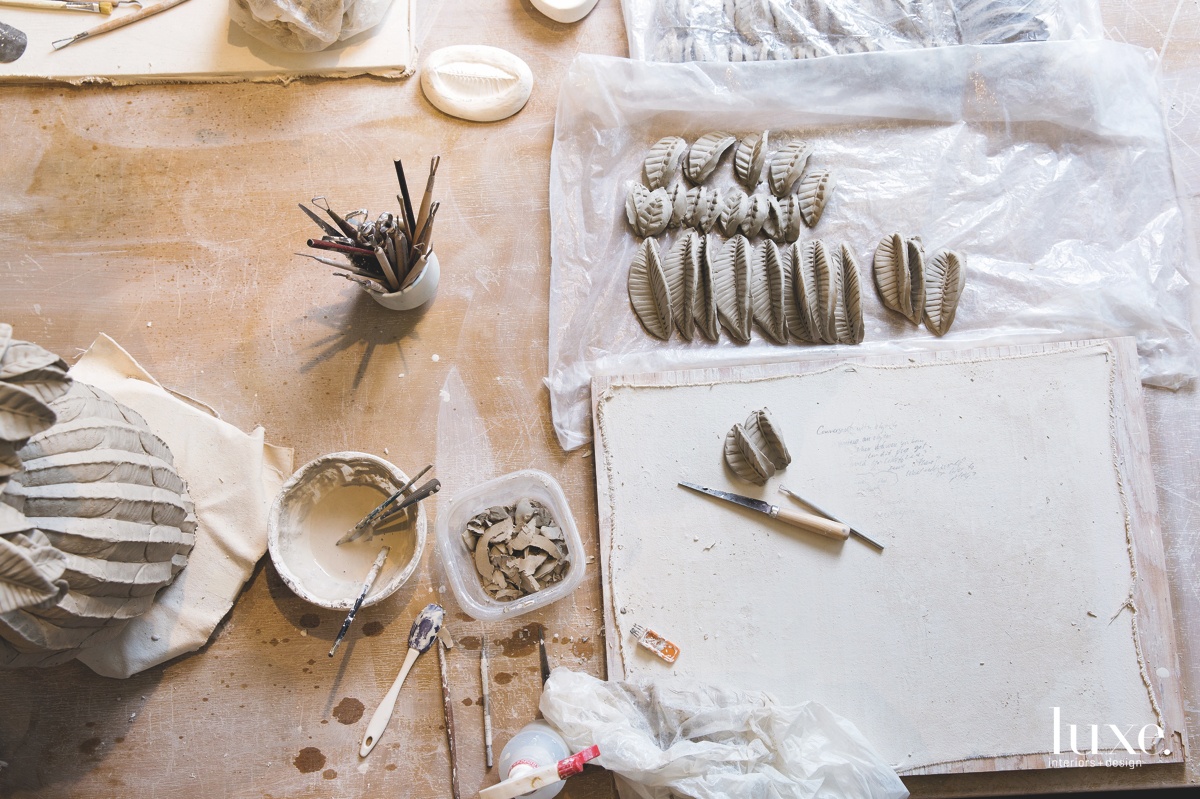 Inspired by the rococo aesthetic tradition of bocage, the artist covers her sculptures, both small and large-scale, with ceramic leaves and other flora.

Inspired by the rococo aesthetic tradition of bocage, the artist covers her sculptures, both small and large-scale, with ceramic leaves and other flora. 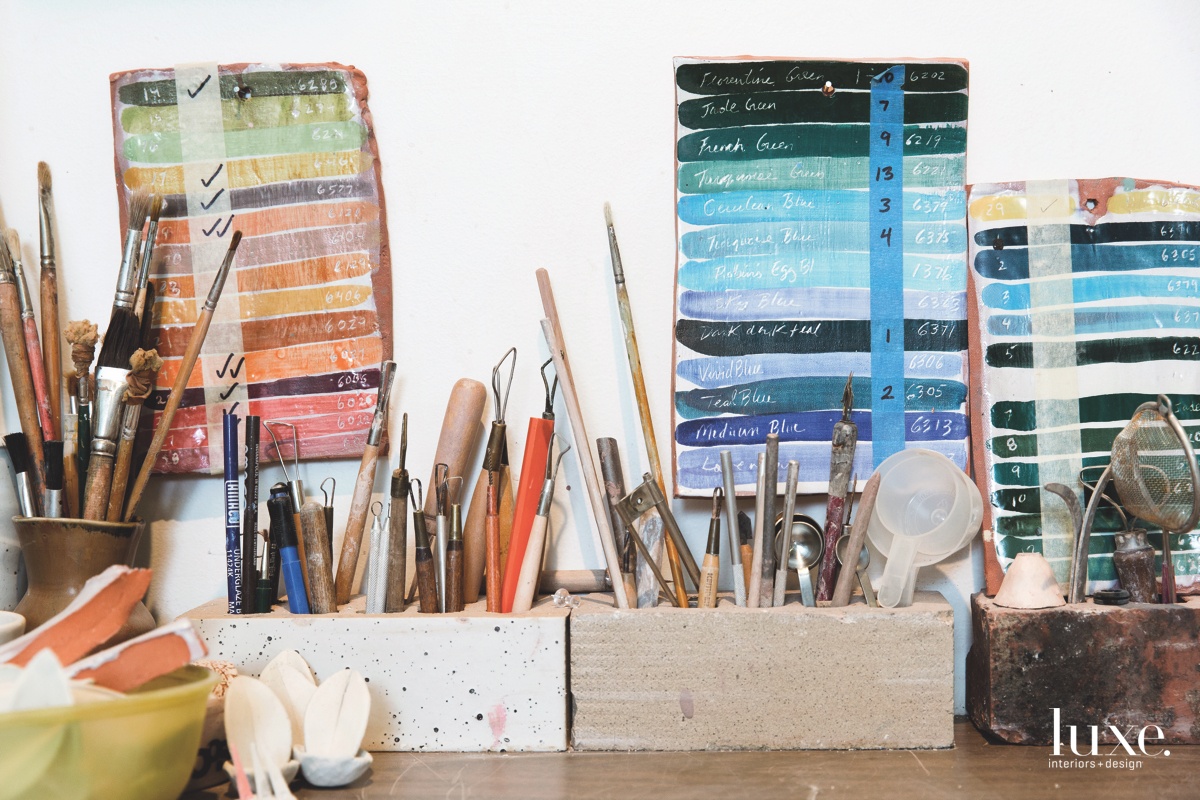 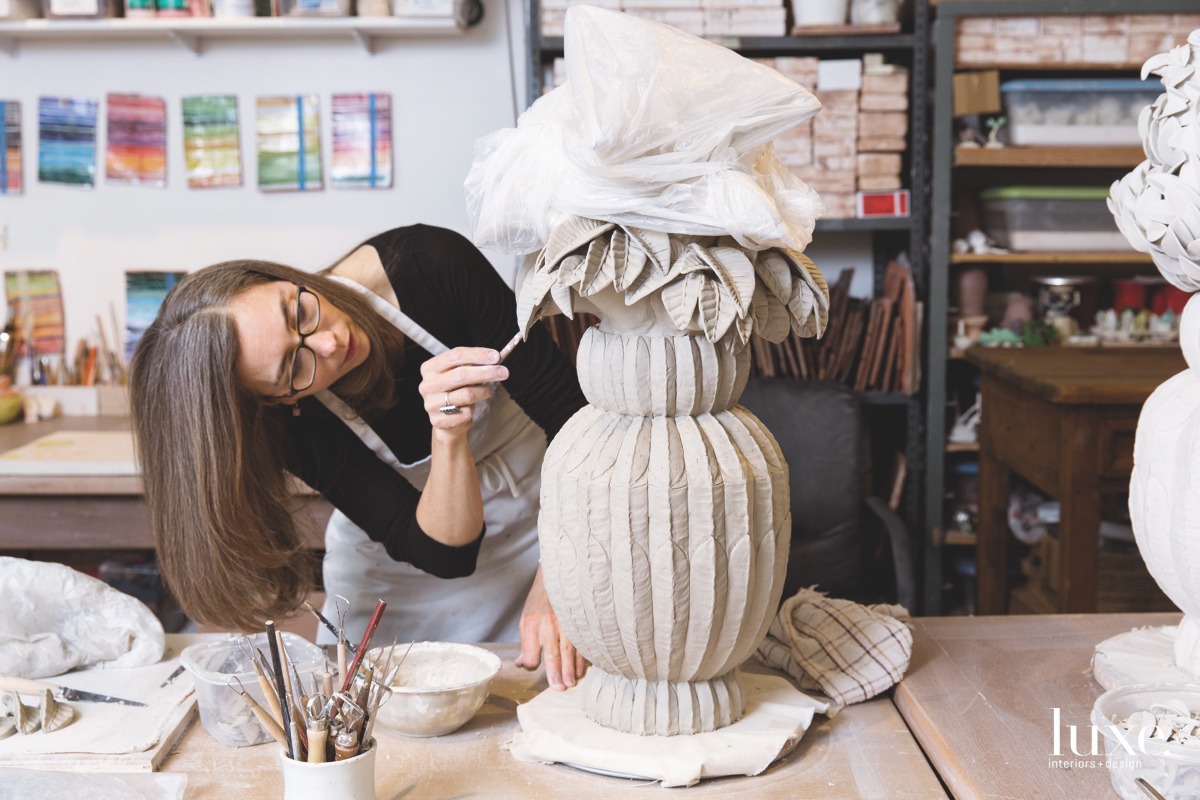 To keep the sculpture from drying out, she covers it partly with plastic while attaching leaves to the top portion.

To keep the sculpture from drying out, she covers it partly with plastic while attaching leaves to the top portion.

Today, Dickey looks at gardens “as a model of how the world is or could be constructed,” she says. Her own eye-catching outdoor-inspired works are marked by thousands of pieces– which she hand-builds or casts from glazed terra cotta, porcelain or white stoneware–that cover a single form. Her style is akin to the rococo aesthetic tradition of bocage, which the artist discovered during a teaching stint in Italy. “It’s the encrusting of functional objects, like candlesticks, with thousands of believable flowers all made from porcelain,” she explains. The effect lends a theatrical flair to mundane objects.

Through her intricate technique, Dickey flips the relationship between decorative and critical by transforming background into foreground. Her Mille-fleur, for instance, is a 20-by-7-foot mosaic of glazed terra-cotta lilies, thistle, wild orchids and other flowers, inspired by the meadow backdrops of the Unicorn Tapestries at The Met Cloisters. On display at the Crystal Bridges Museum of American Art in Arkansas, her dreamlike depiction is set against natural shrubbery, inviting viewers to question the differences between the ideal and the real.

Now, Dickey is working on a sculptural mural, A Sixth Sense, to be displayed beginning in June at the Fondation d’entreprise Bernardaud‘s “C’est le bouquet!” exhibition in Limoges, France. Her contemporary amalgam of the backgrounds depicted in the 16th-century tapestries The Lady and the Unicorn will be a 6-by-9-foot crimson meadow of more than 3,000 sculpted terra-cotta quatrefoil leaves. As one nears the sculpture, the painted piece will seem to pixelate in a mirage-like effect. “I want to allow the viewer to see the environment as the subject, not the object, of the portrait,” Dickey explains. “I aim to do so by removing the human actors central to these tapestries, leaving behind the teeming flora and fauna as the featured performers.”

Given the intricacy behind each work, Dickey’s pieces can take between one to six months to complete. But the artist finds the process to be its own reward. “I work at night, when everyone else goes to sleep,” she says. “It means I get very little sleep, but it’s a trade-off I’m willing to make. As the world quiets down, my own dream world opens up. Nights are magical times.”