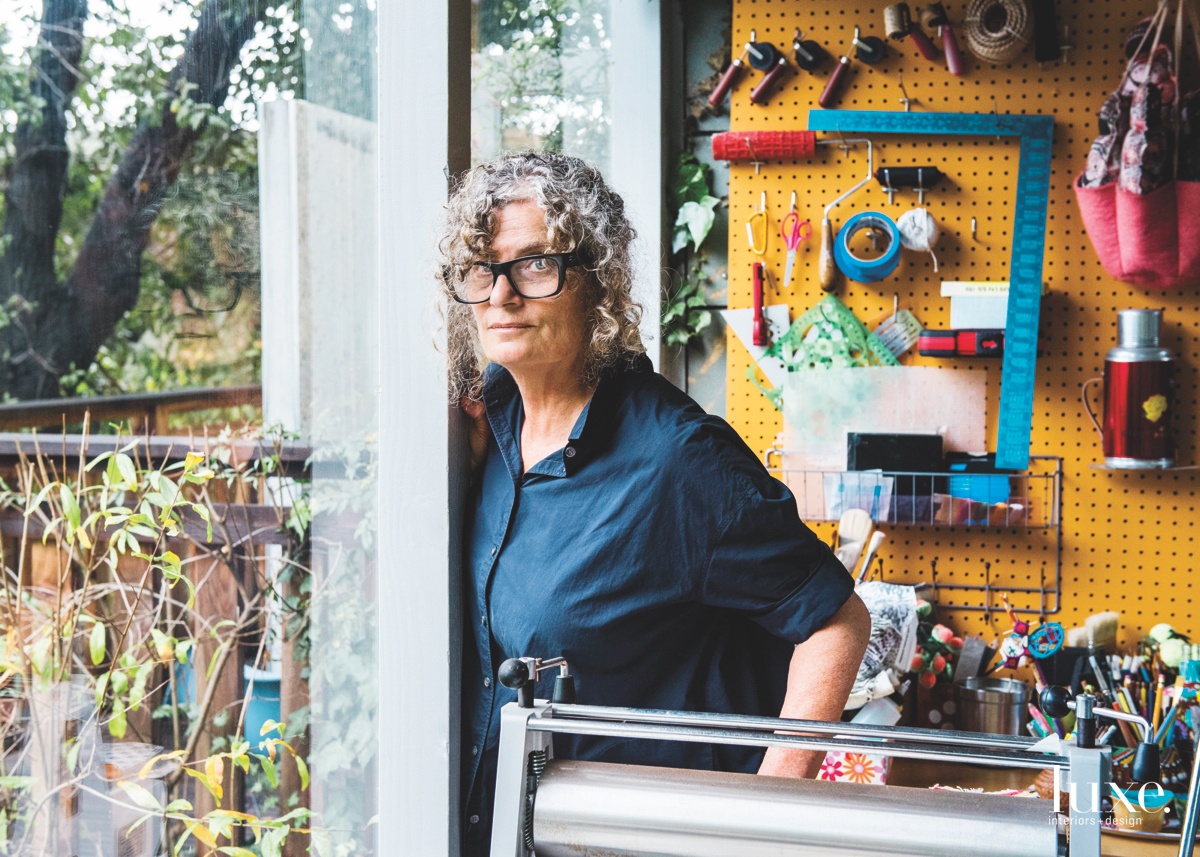 I‘ve always been visually and intellectually curious, and done work that fostered creativity and empowerment,” says Bonnie Saland, the founder of Philomela, a textile and wallpaper company. Until recently, though, Saland, a practicing psychoanalyst, did not devote much formal time to her artistic side. But that changed when, with her children grown, she and her husband, attorney Mark Beck, moved to a cottage in Pasadena. “It’s small and cozy,” she says. Yet it gave her just enough space to set up a studio where she could explore her passion for drawing, painting and printmaking. Saland then began conceiving designs, often starting with journal sketches, rooted in themes of birth, survival, death and regeneration. With digital manipulation, she transformed the images into patterns that lent themselves to home furnishings. In 2015, she launched Philomela (named for the Greek mythological figure who lost her tongue and communicated through her weavings) and now offers a catalogue of more than 200 designs available at Quintus in L.A., and other showrooms around the country. 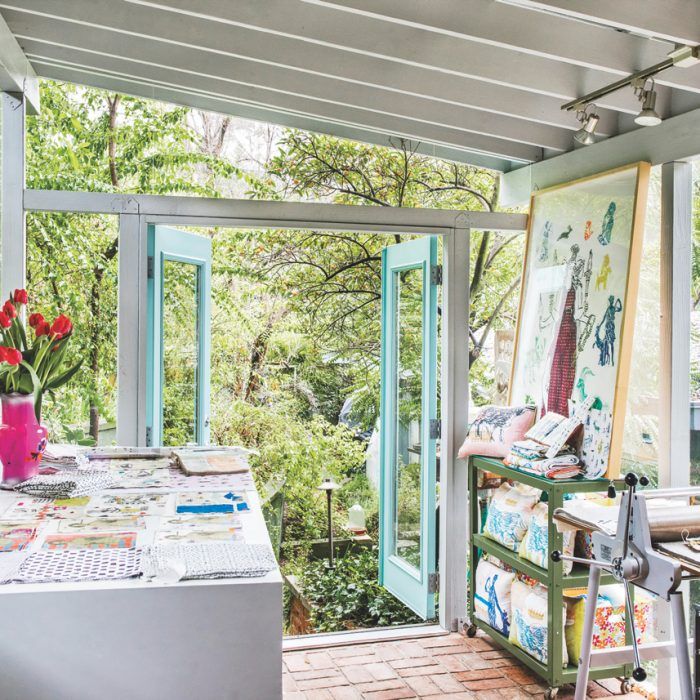 The designer's studio at her Pasadena home gives her plenty of space to create.

The designer's studio at her Pasadena home gives her plenty of space to create. 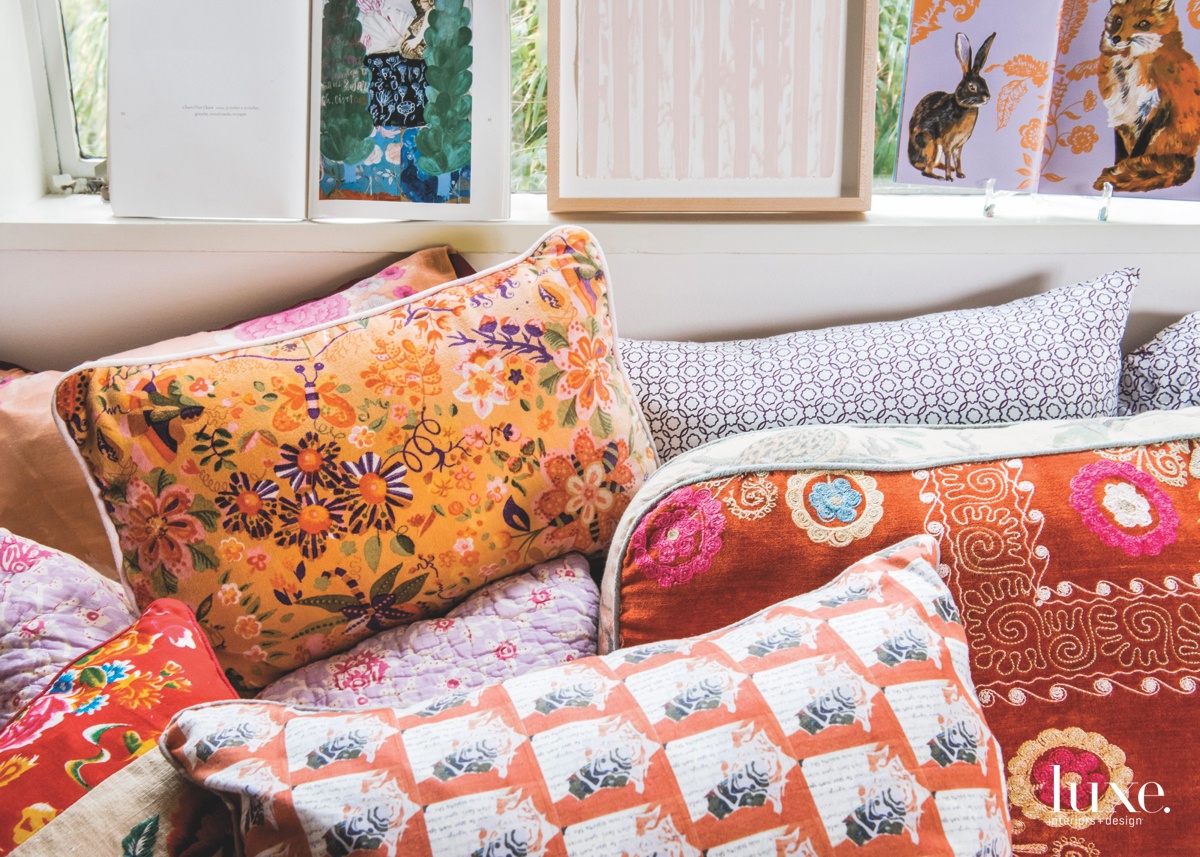 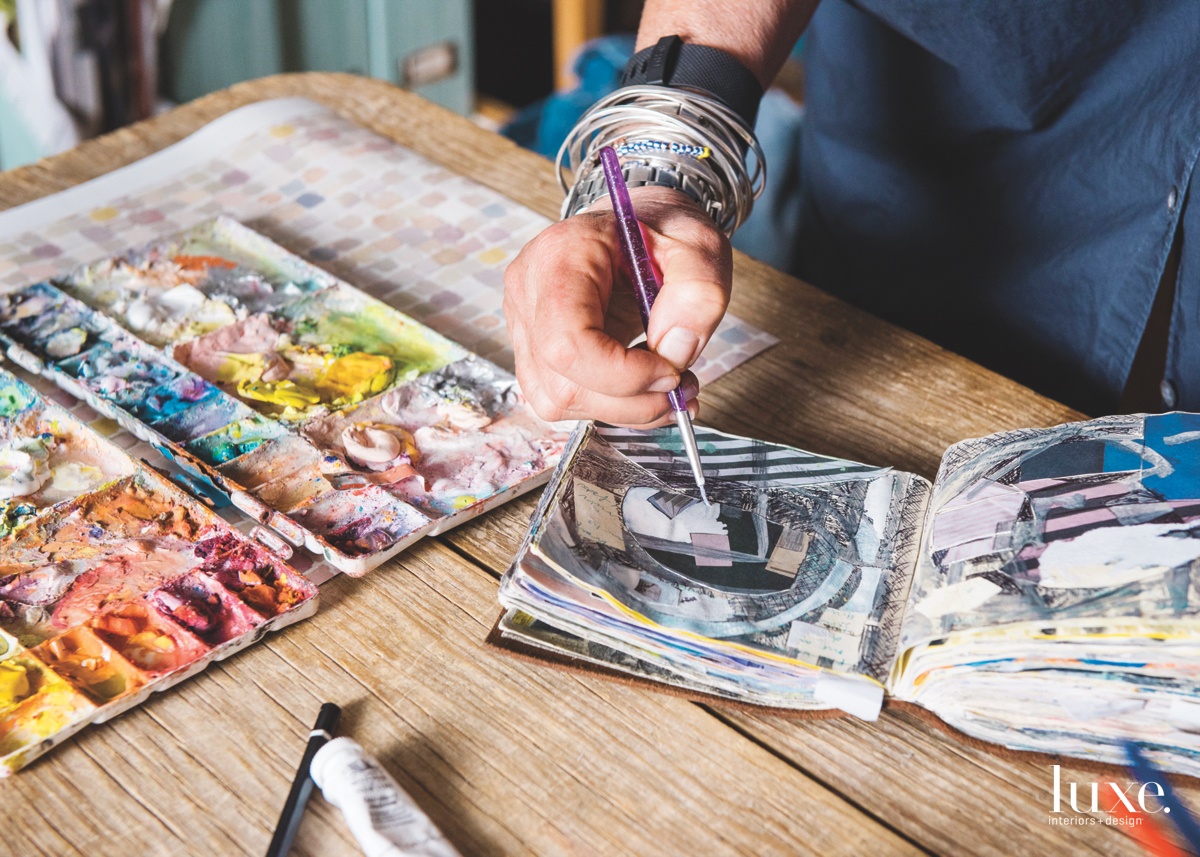 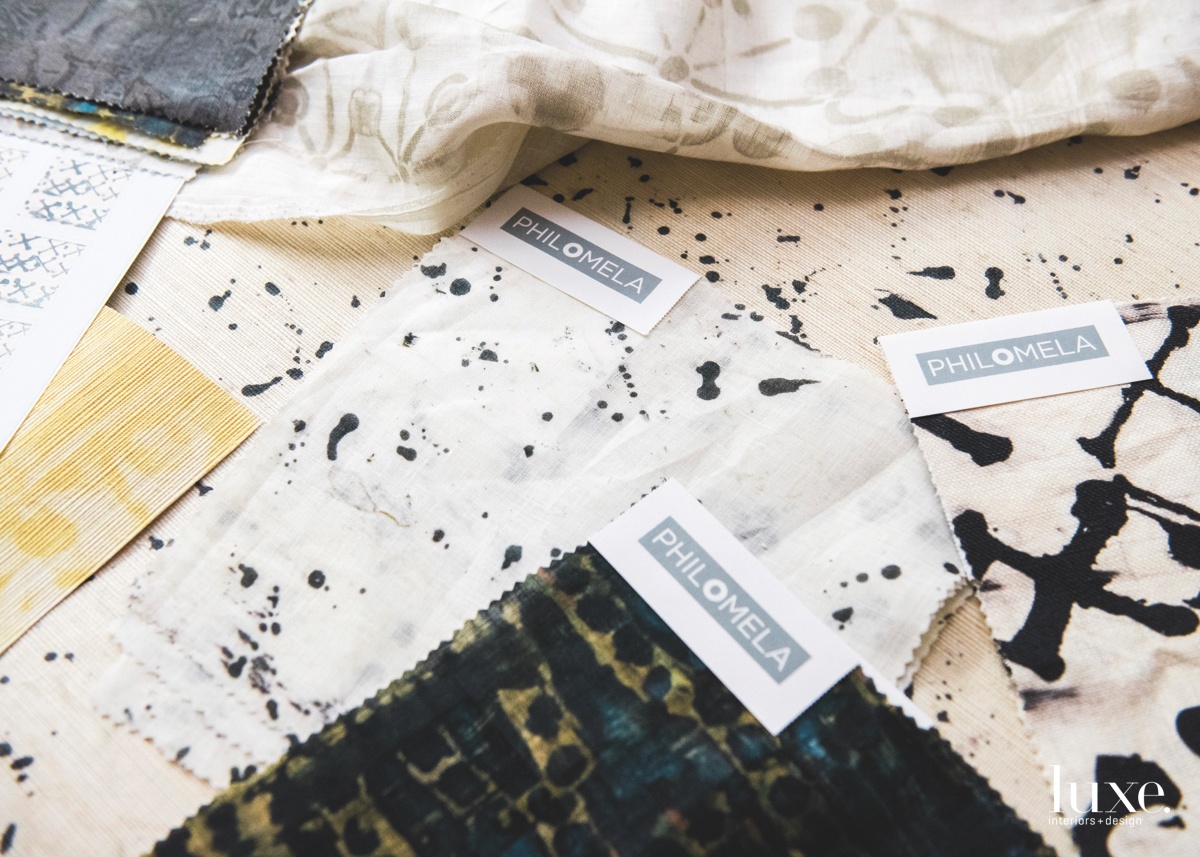 The designer's Wax collection is her take on batik textiles.

The designer's Wax collection is her take on batik textiles. 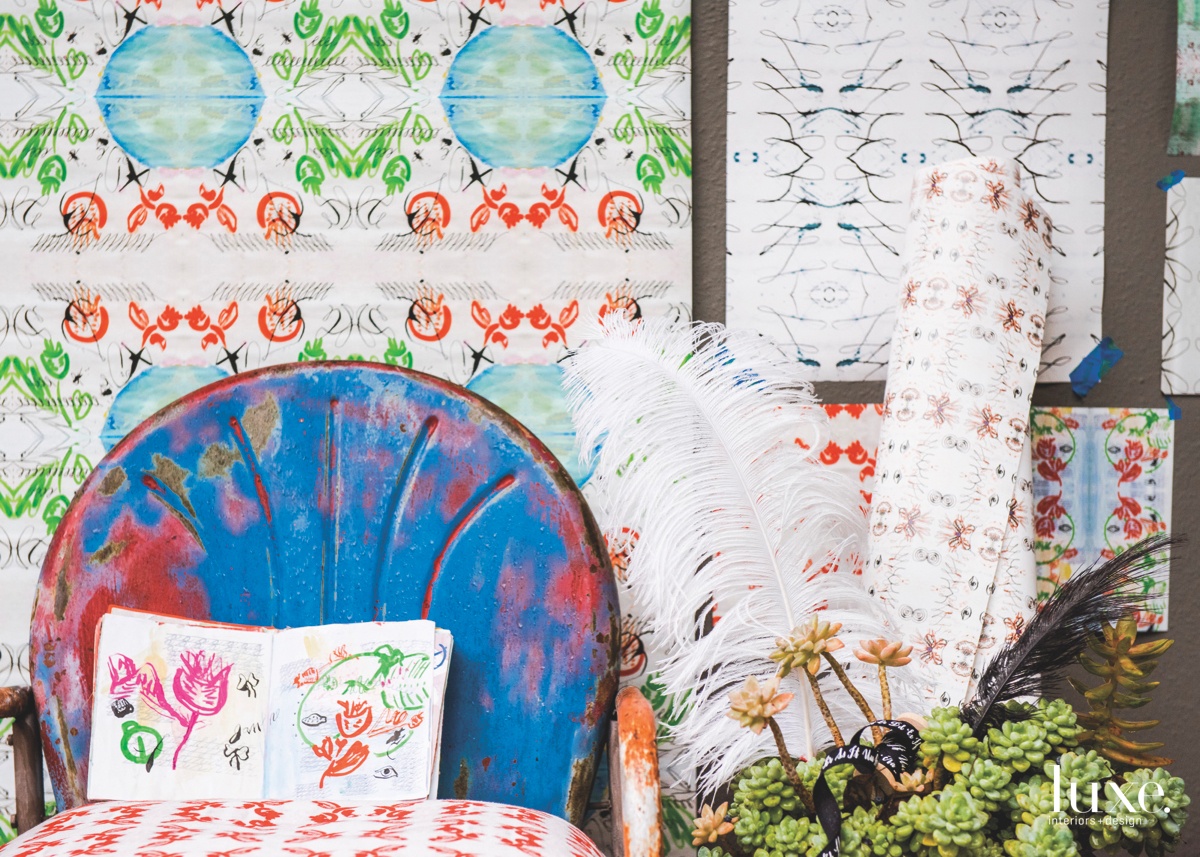 Another of Saland's journals rests on a vintage garden chair; behind are designs from the Penmanship collection.

Another of Saland's journals rests on a vintage garden chair; behind are designs from the Penmanship collection. 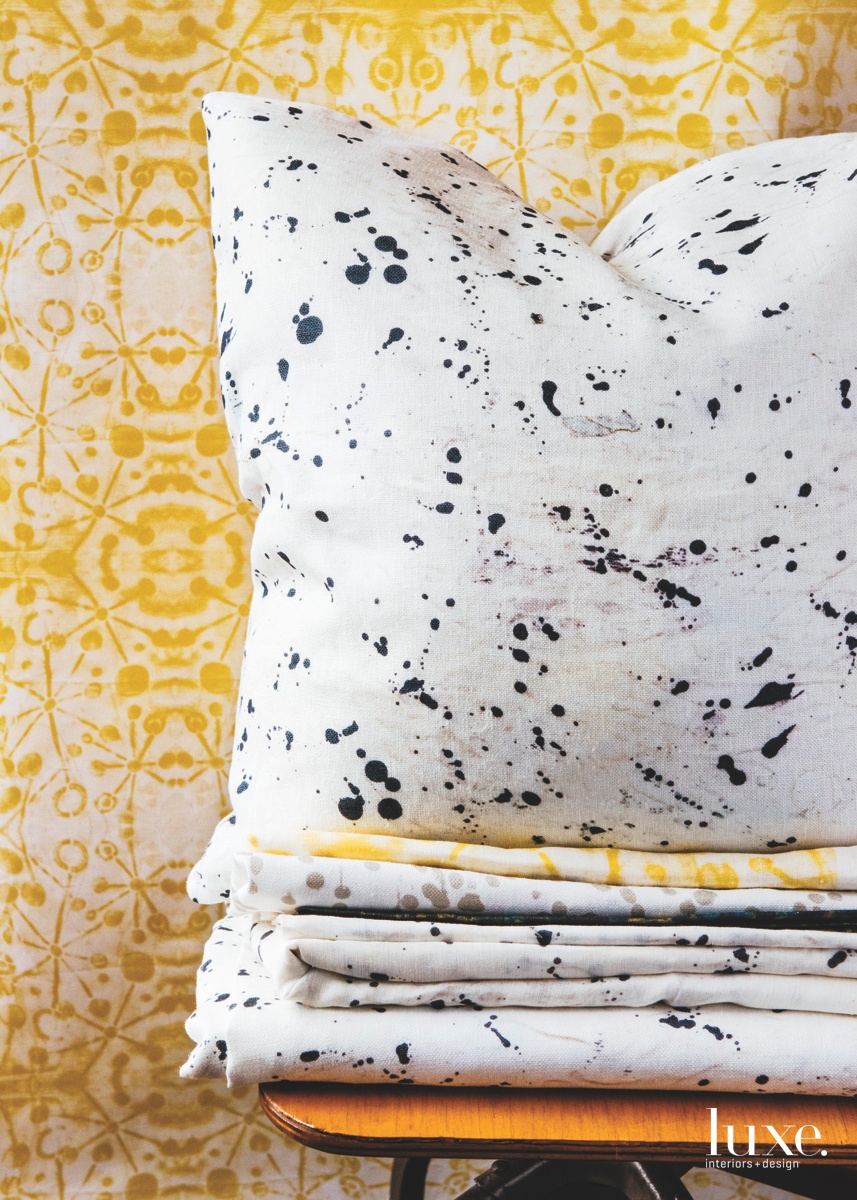 Flores and Stylus are two of the designs in Saland's Wax collection.

Flores and Stylus are two of the designs in Saland's Wax collection. 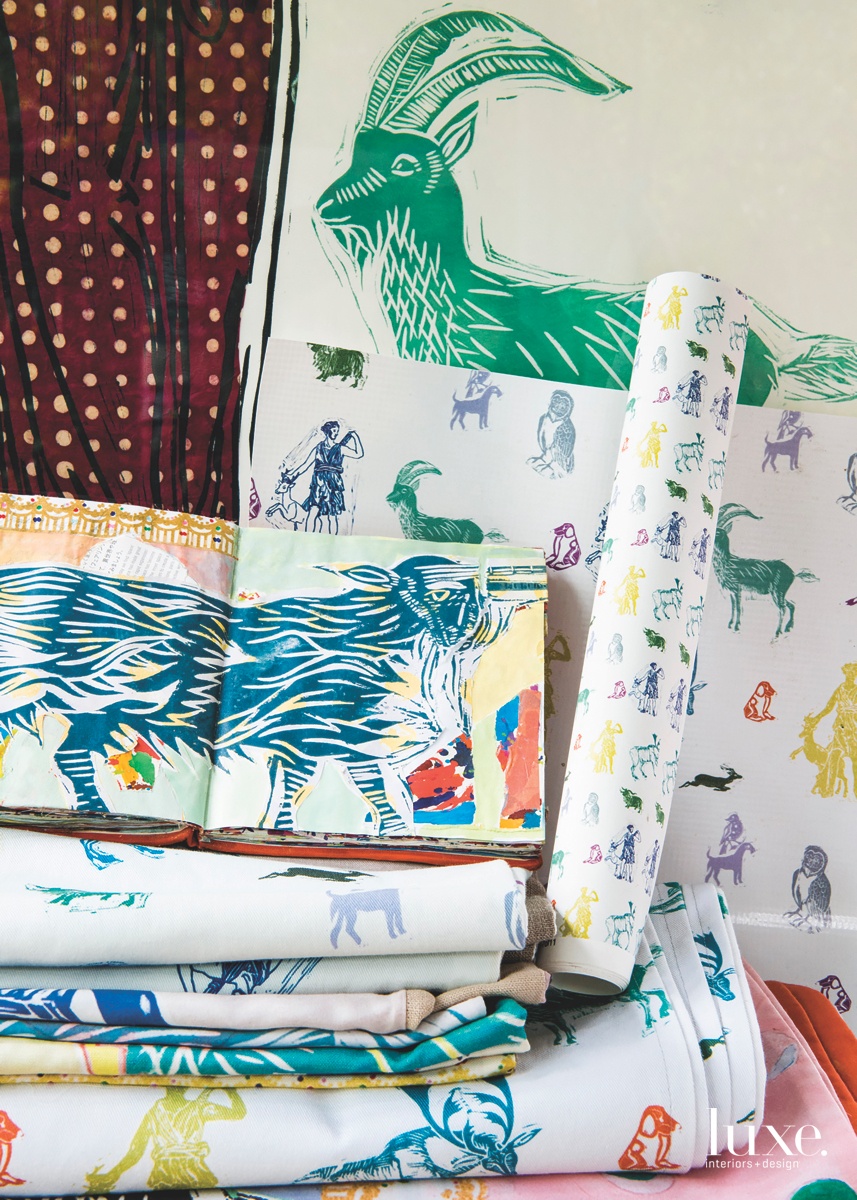 Guided by the belief that color and pattern yield a more joyful environment, Saland notes that she likes to use her energy and strength “to contribute to what uplifts.” But a closer examination of her designs reveals a much deeper meaning. “The subject matter for my work is taken from the personal and collective unconscious, as well as figurative, geographic, literary or visual prompts,” the designer says. “I’m drawn to the juxtaposition of the dissimilar and life’s core paradoxes: chaos and control, masculine and feminine, absence and ornamentation, mystery and the body. Conceptually, psychoanalytic thought and Buddhism are my deepest influences.”

Travel, too, informs Saland’s work. She’s currently planning a trip to Africa and recently returned from Marfa, Texas, where she was captivated by artist Donald Judd’s work and legacy. A more frequent journey is the trip she takes north to her second home in Sea Ranch where she and her husband spend part of their time. “For me, the Sonoma Coast is one of those spots where you truly sense the ‘thinly veiled’ barrier between this world and the next,” she says, noting that its ocean views offer a perfect counter to the more frenetic pace of life in the L.A. area. “They’re very different experiences that trigger many distinct ideas,” she says. Regardless of where she goes, the artist is never without her journals and art materials.

Lately, Saland has turned her attention to exploring historic textiles and their techniques such as shibori (a Japanese form of tie-dyeing), bojagi (a traditional Korean wrapping cloth), embroidery and tapestry weaving. This spring, she is designing for her daughter Jeorgea Beck’s handbag and lifestyle company, La Fortuna. But whatever brings her into the studio simply makes her happy. As she puts it, “I love learning new skills and making things. Being able to do what interests me, driven by my deepest values, feels like rightful work and intentional living–both seem central to a life well-lived.”