Hot air balloons landing on the lot next door are a common sight,” says Marie Perrin-McGraw–one half of the duo behind Lustered Walnut–of the studio’s idyllic surroundings.
Located in a former machinist’s space on a family-owned plot of land 15 minutes outside of Temecula, California, complete with vineyards, fruit trees and views of the snow-capped mountains, it is there that Perrin-McGraw and her partner, Robert Turek, craft their expanding collection of ceramics, ranging from growlers and plates to faceted vessels.

The pair, who met while studying at Cranbrook in Michigan, landed in Southern California five years ago. A year earlier, Perrin-McGraw began crafting mugs for a holiday sale. “Robert decided he would help me make them better,” she jokes, “so we started talking about how to go about making a mold for them.” Turek quickly took to the work.”I love designing products because you’re not only creating the form and surface, but the whole production process.” The vagaries of clay had an added appeal to Turek, since the medium’s tendency to shrink and warp means that yielding a successful finished product is not always a given. 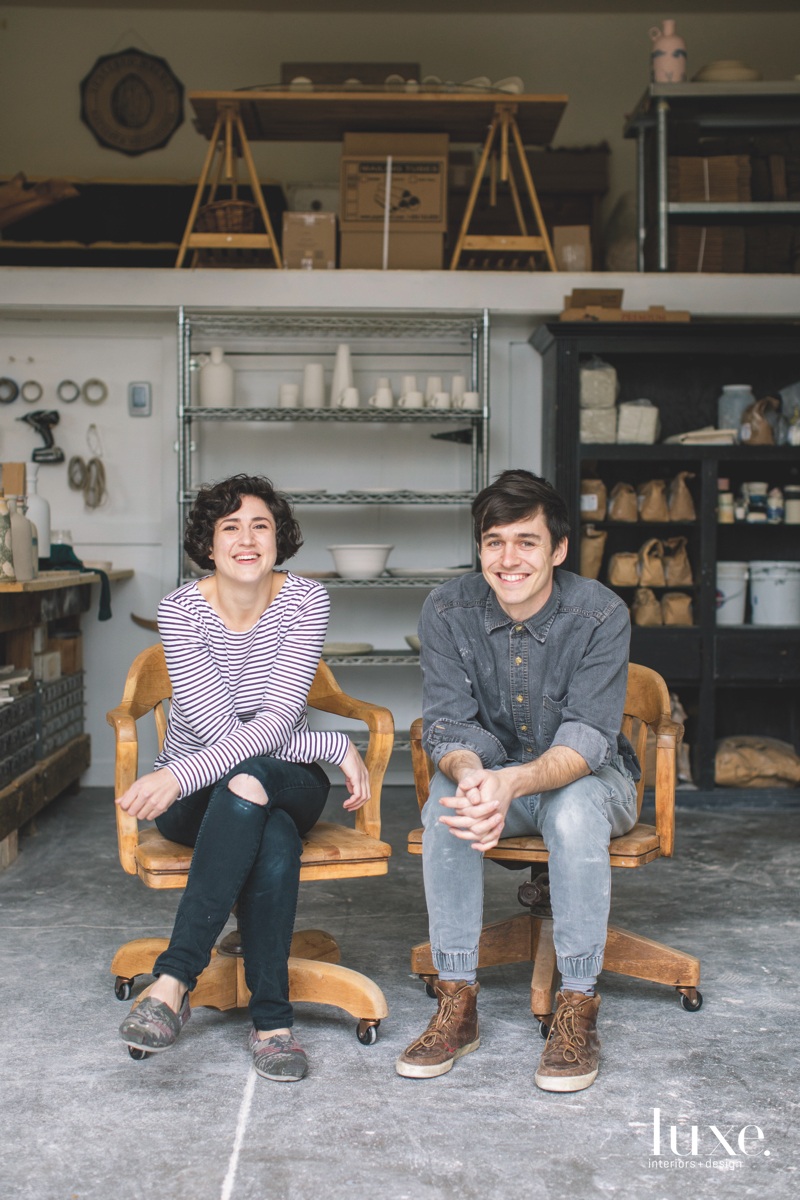 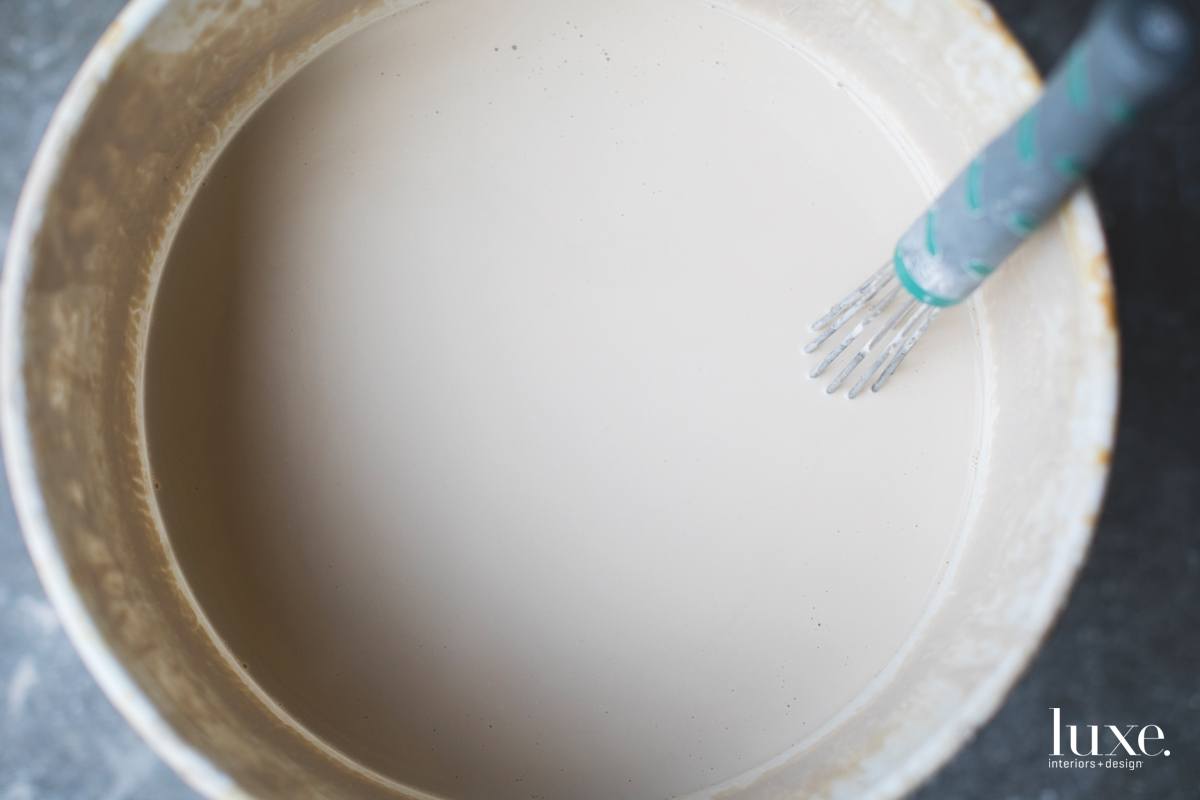 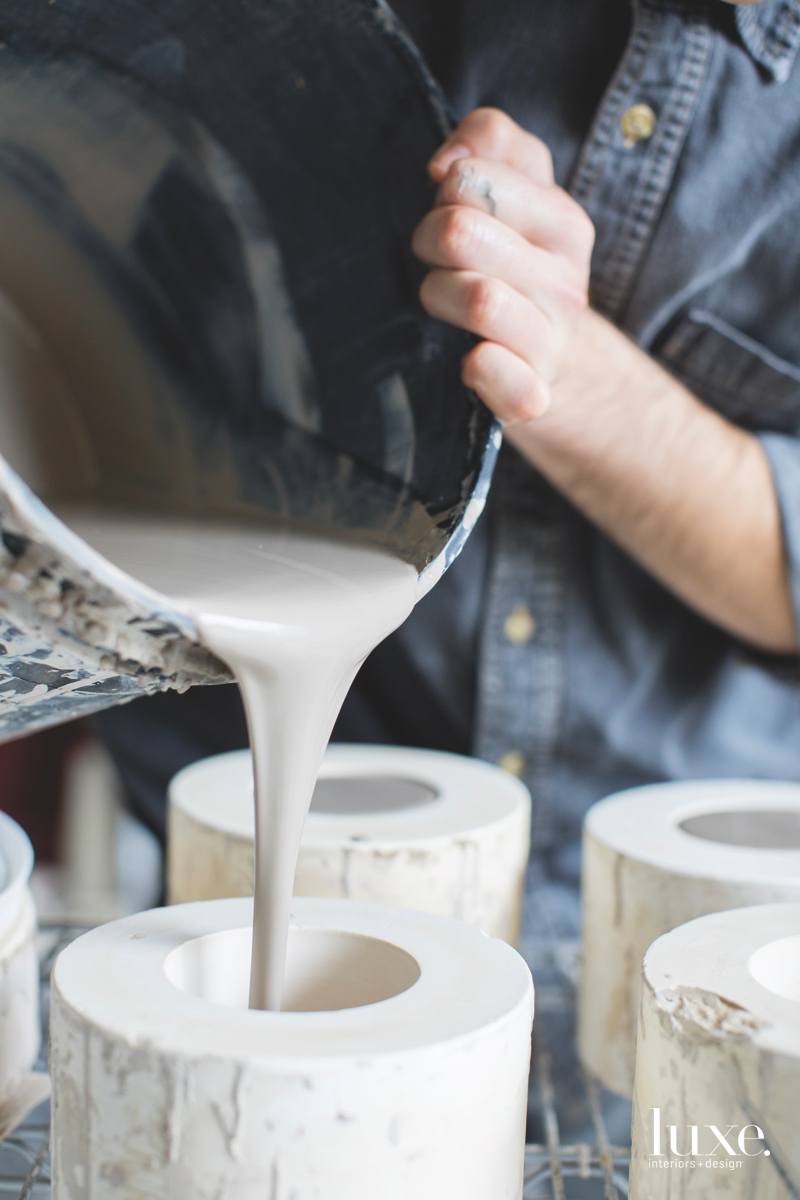 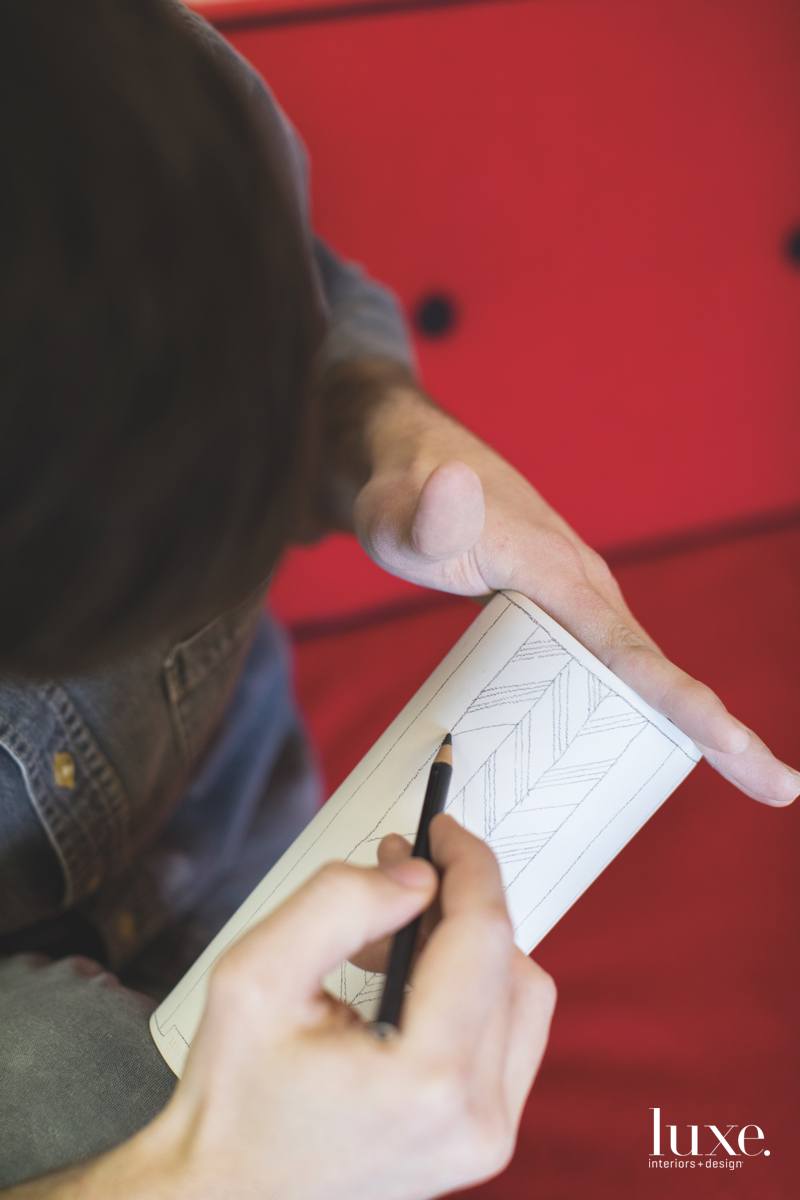 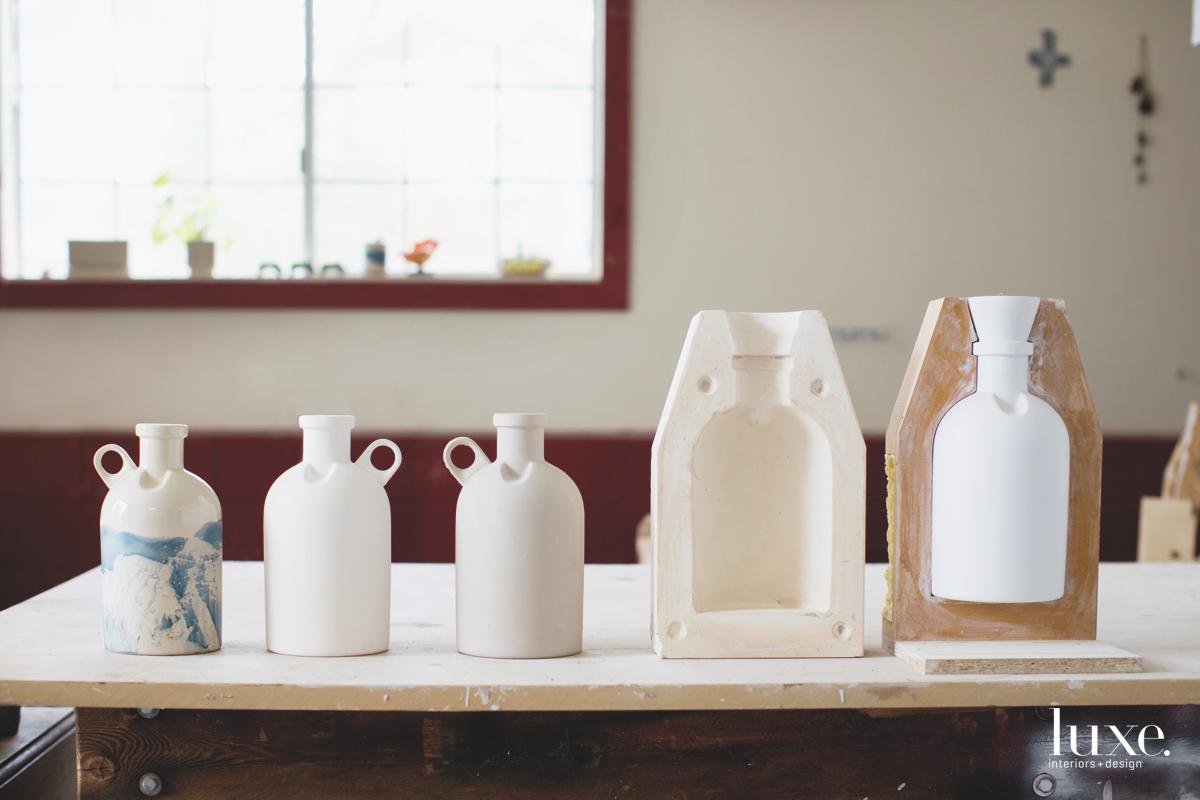 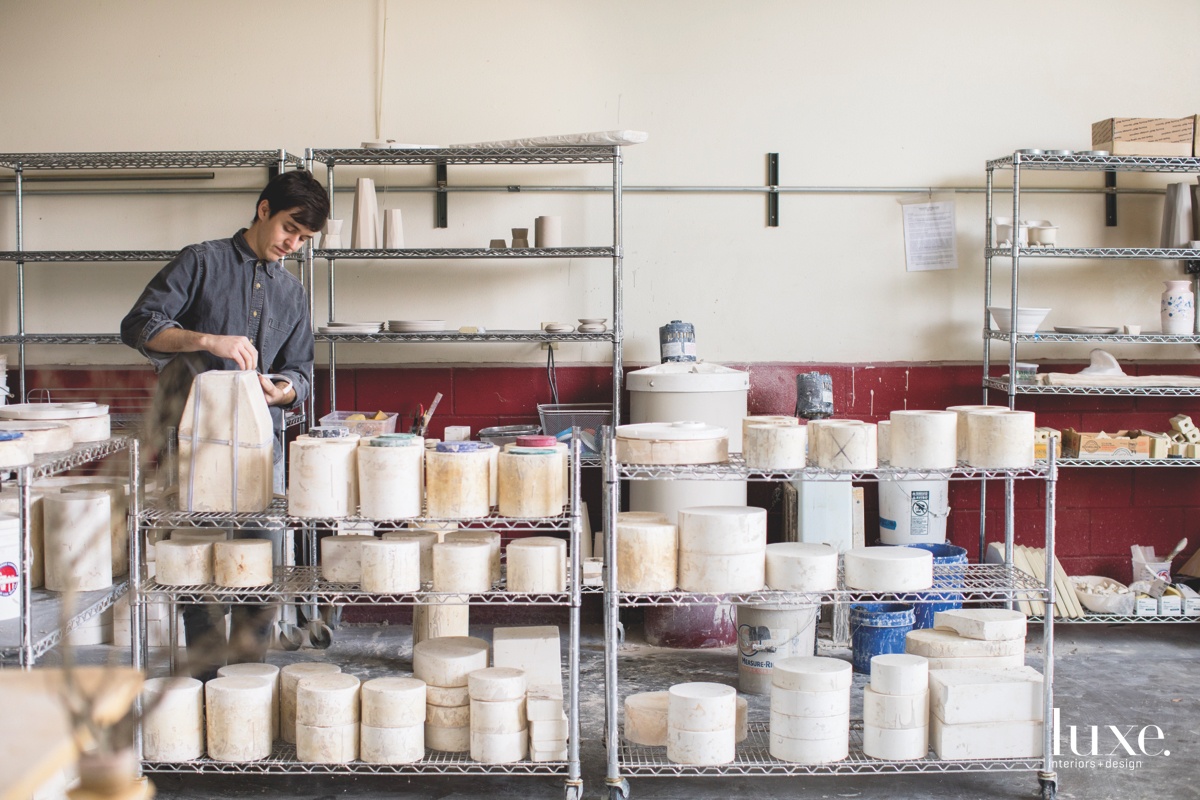 Perrin-McGraw acts as the lead ceramicist and painter. Meanwhile Turek makes forms and molds, often using CAD software to create a consistent profile across a collection, allowing dishes to nest onto larger platters, for example, or to calculate the shrinkage that occurs during the firing process. Instead of working with blocks of semi-moist clay, the couple relies on slip casting, a process where liquefied clay is poured into a plaster mold. “It’s often used as a massproduction method,” Perrin-McGraw says, “but that’s not the case in our studio.”

After the first firing in the kiln, the pieces might be painstakingly hand-decorated with pencil by Turek (he describes the experience as meditative–at least when he’s not listening to RadioLab podcasts), or Perrin-McGraw might splatter the ware with a liquid resist and then dip it into a glaze formulated to resemble indigo dye. After the last firing, the matte non-porous surfaces are sanded until they take on the smoothness of polished marble. “We designed our line to be clean and contemporary while remaining warm and inviting,” notes Perrin-McGraw. The result is a balance between the careful, tight repetition of Turek’s drawings and the looseness and organic feel of Perrin-McGraw’s finishes.

“The original idea was for Lustered Walnut to eventually become a full home goods line with wood and ceramic pieces,” Turek says. At the moment, the duo are a little closer to that goal. Perrin-McGraw has been working on some thrown and hand-built forms to bring a sense of movement and texture to the collection. They’re also prototyping lighting and tile designs. “There’s a great satisfaction in having a vision, materializing it and then seeing it used by people in the world,” Turek says.