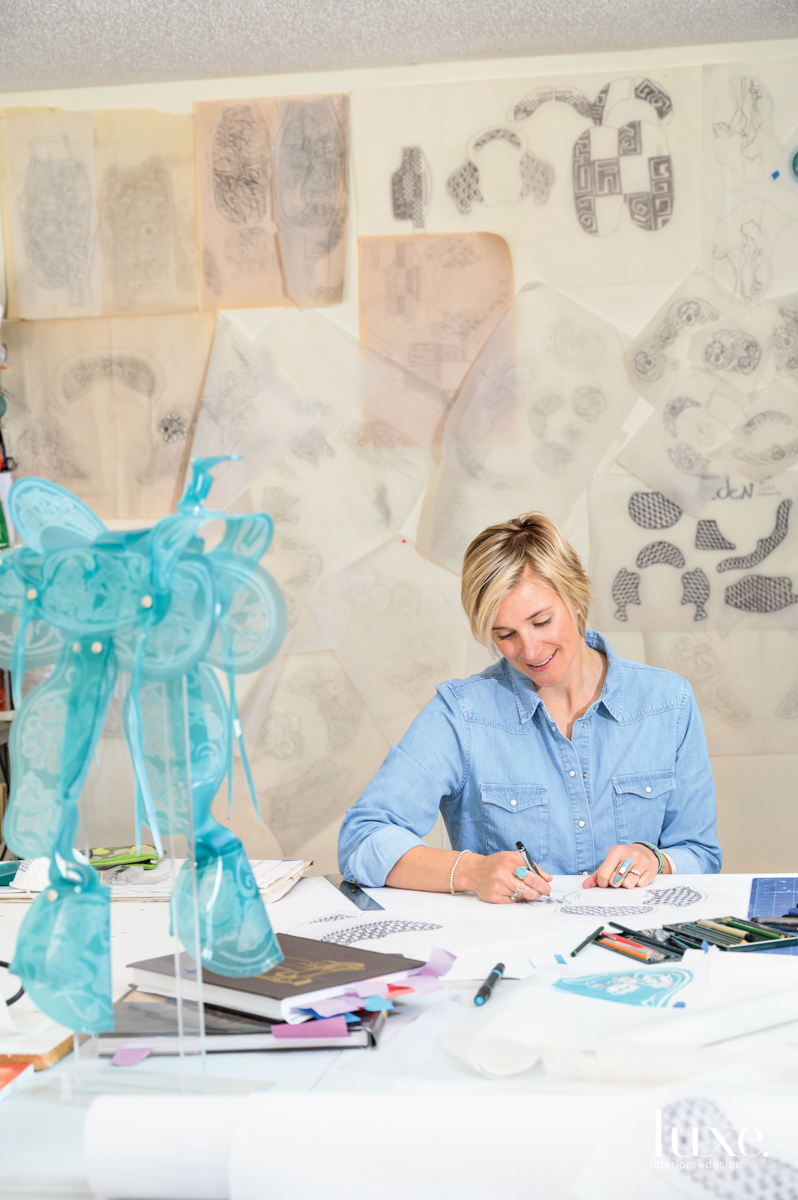 While drawing in her studio, Eichelberger is surrounded by plans and patterns.

Maeve Eichelberger did not foresee working with Plexiglas. But the acrylic material has come to define the artist’s work since 2011. Eichelberger earned her Master of Fine Arts in Miami and gained global perspective during extended stints in Ireland, Italy and England. But when the “big skies and untouched land” of Colorado called her home, she chose to embrace it, conjuring early memories of downtown Denver–where she examined buildings with her architect father–and the family’s Larkspur ranch that teemed with chickens, peacocks, goats and horses. 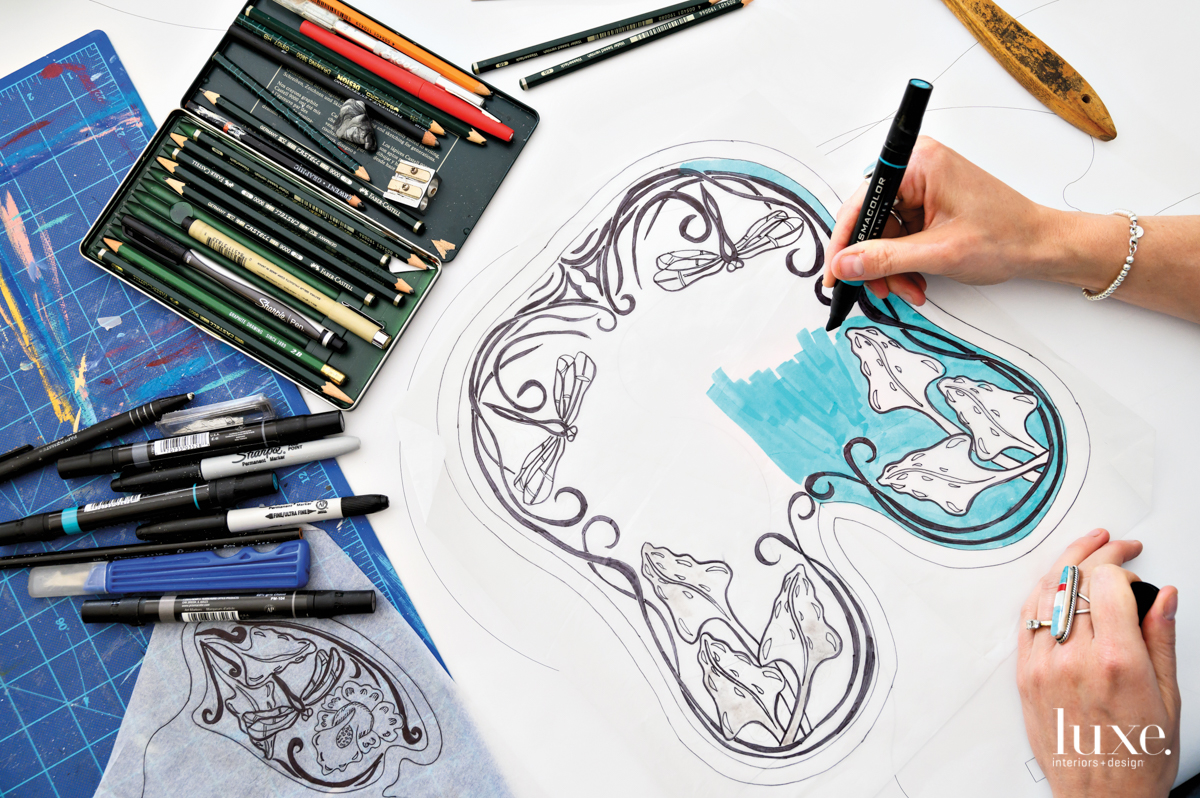 The artist uses pens and pencils to sketch patterns that she will later etch into her sculptures.

The artist uses pens and pencils to sketch patterns that she will later etch into her sculptures. 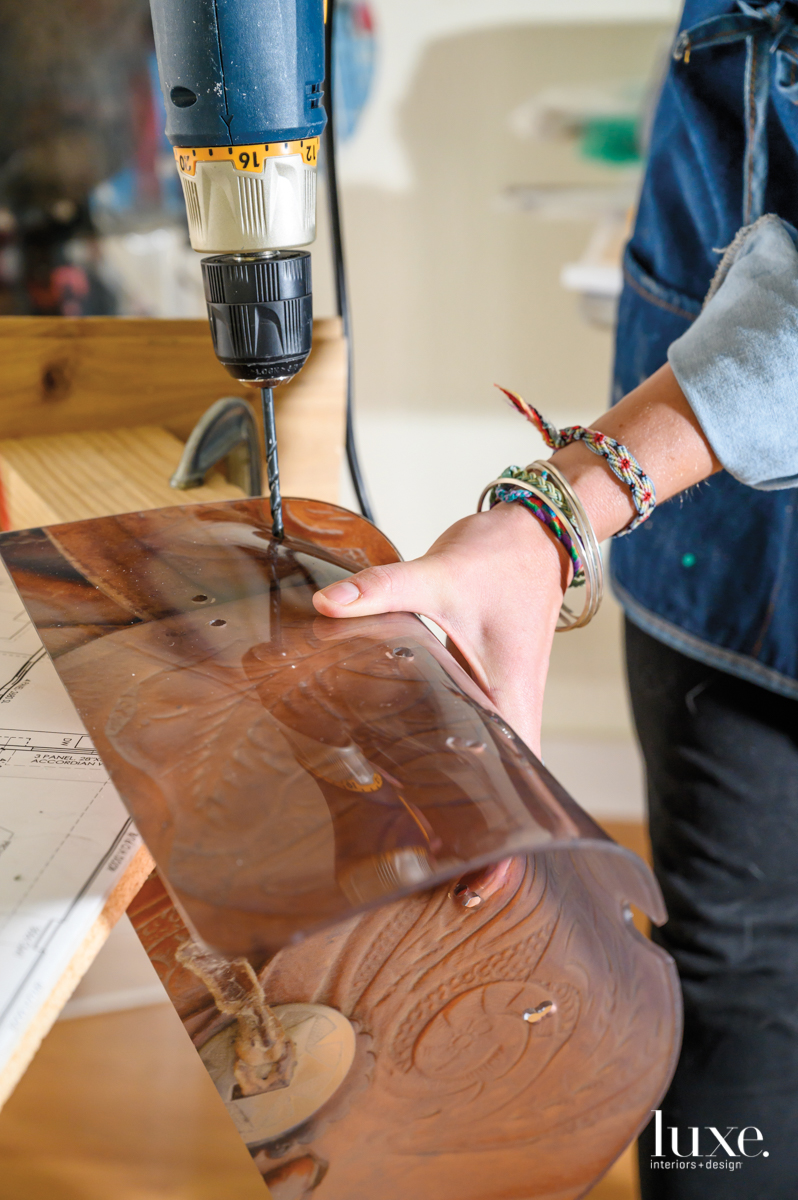 Using a drill, the artist adds holes to her creations. Later, she will use grommets to join the pieces.

Using a drill, the artist adds holes to her creations. Later, she will use grommets to join the pieces. 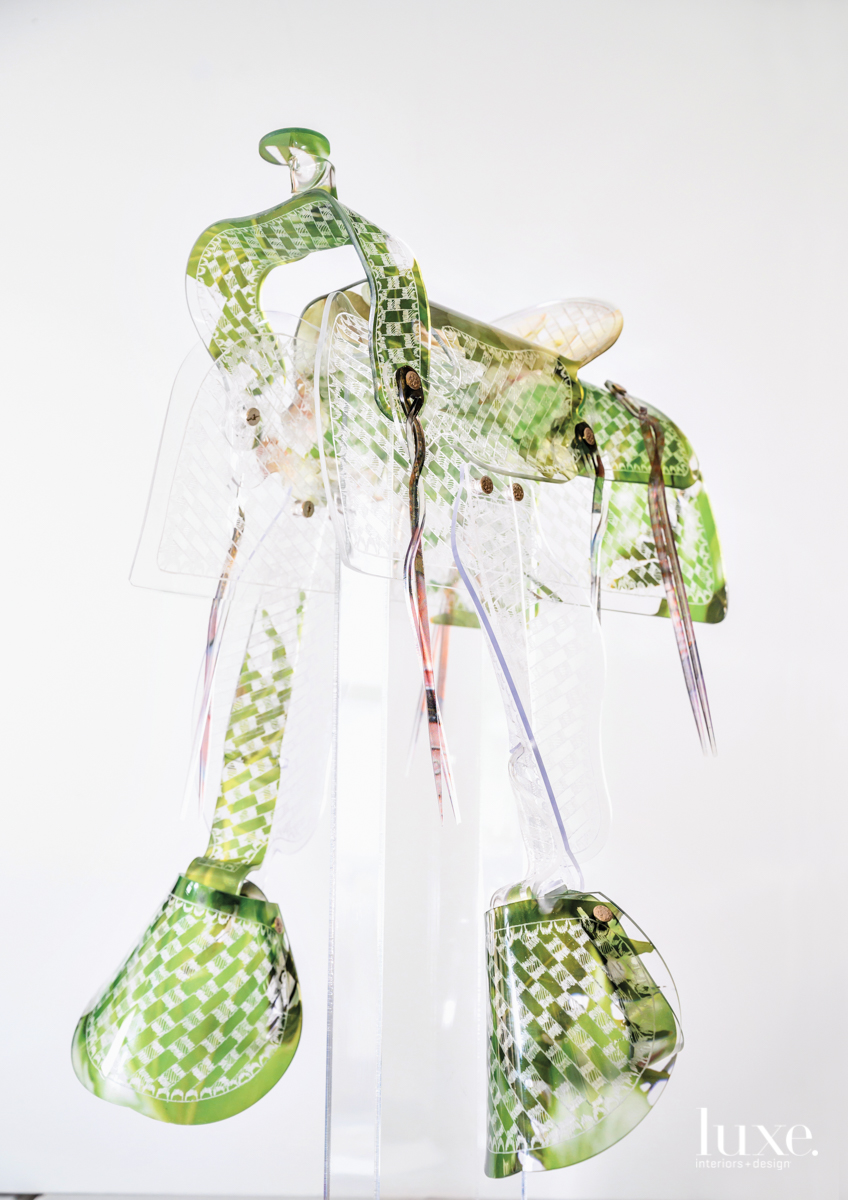 A Colorado artist captures the old West with an unusual medium.

A Colorado artist captures the old West with an unusual medium. 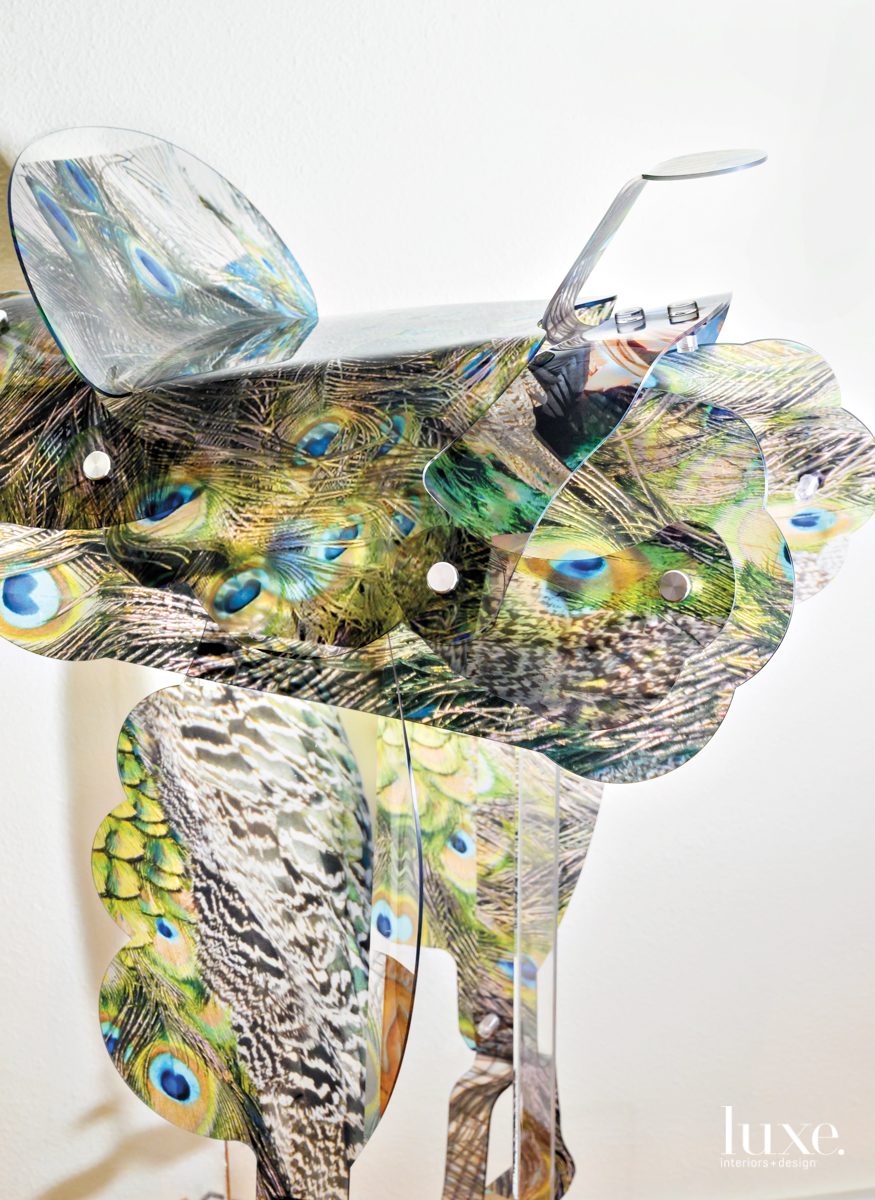 Eichelberger fuses her photos on sheets of acrylic before shaping them into saddles.

Eichelberger fuses her photos on sheets of acrylic before shaping them into saddles. 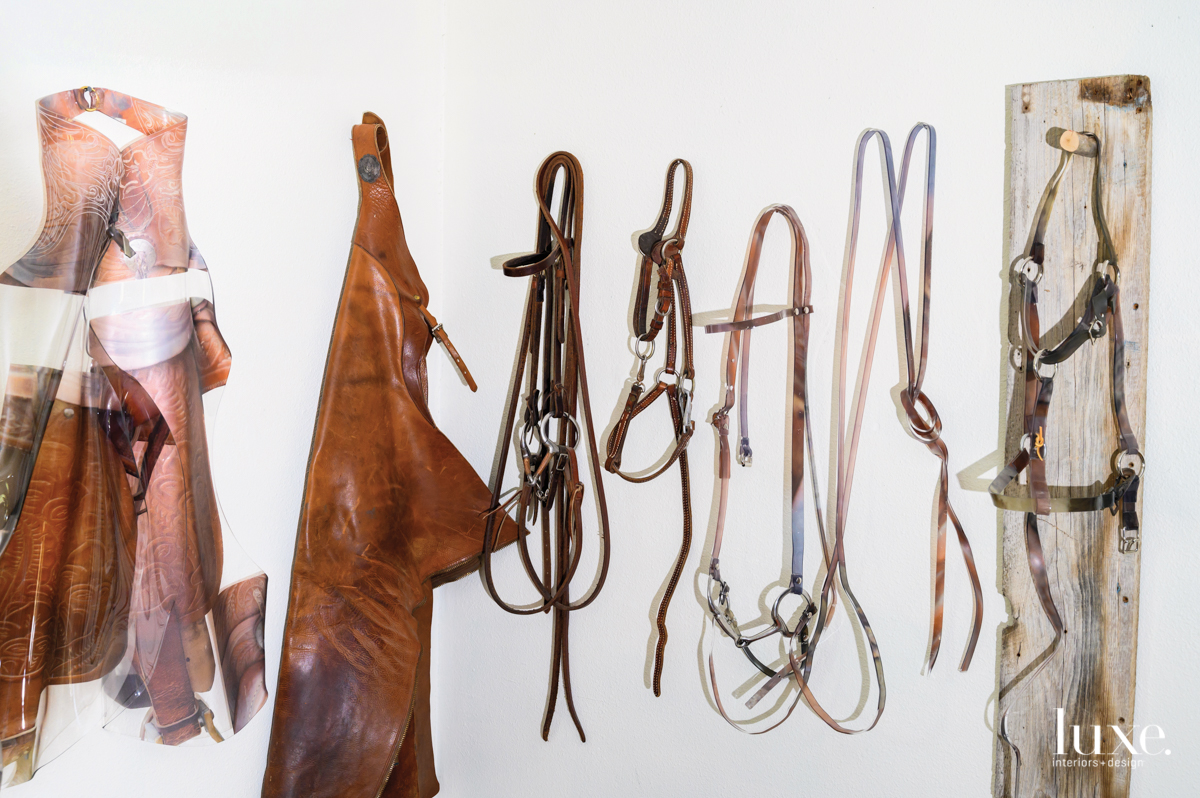 The artist initially explored Plexiglas as a vehicle for displaying her history, using sheets of the material as mounts for photos depicting everything from urban skylines to American West iconography. Four years ago, she started sculpting with it. Today, her Plexiglas sculptures take inspiration from vintage horse tack, such as saddles and bridles. Her photos add texture and dimension to the clear acrylic and serve as sentimental touchstones.

Eichelberger personally takes each picture–be it a bucking rodeo horse or the plumage of a ranch peacock. A Denver printshop ink-jets the images onto 4-by-8-foot sheets of Plexiglas and then laser-cuts them into shapes, not unlike dress patterns. When boxes of the latest run land on her doorstep, “It’s like Christmas,” says Eichelberger, who left bustling Denver two years ago for the slower place of Paonia. In her sunny home studio, she is surrounded by giant aloe and happy philodendron that bask in the light of its south- and east-facing windows. “Without sun, I can’t function,” the artist says.

Light is crucial to the next step of Eichelberger’s craft, which often includes using a Dremel to etch designs onto the Plexiglas. Working from memory and imagination, the artist channels the tooled-leather motifs of traditional saddlery–including flowers, leaves, swirling filigrees–but edits them to make them her own. The real thrill, though, is when she free-hand sculpts her cutouts using a heat gun. “You have to work fast–the acrylic could crack or turn to mush otherwise; it’s not as pliable as paper, fabric or leather,” says Eichelberger, who assembles the parts with Chicago screws or resin fasteners.

The artist has most of the steps perfected–so much so that she recently undertook a brave new ambition: combining multiple details in a single sculpture. “I started etching into the images as well, like adding a basket weave pattern on top of an existing image,” she notes. “It adds another dimension to the texture, and it’s a play of color and negative space that’s a sort of subtraction process.” As the saying goes, “without risk, no reward.”