The beauty of Charleston has long been captured on canvas, but emerging artist Marina Savashynskaya Dunbar is interpreting the Lowcountry’s allure through a thoroughly contemporary lens. She sees the surrounding landscapes—marshland, river, ocean, live oaks and palmettos—in ways similar to her early-20th century counterparts, Alfred Hutty and Alice Ravenel Huger Smith among them. However, unlike those trailblazing painters, her mixed-media works are anything but familiar. 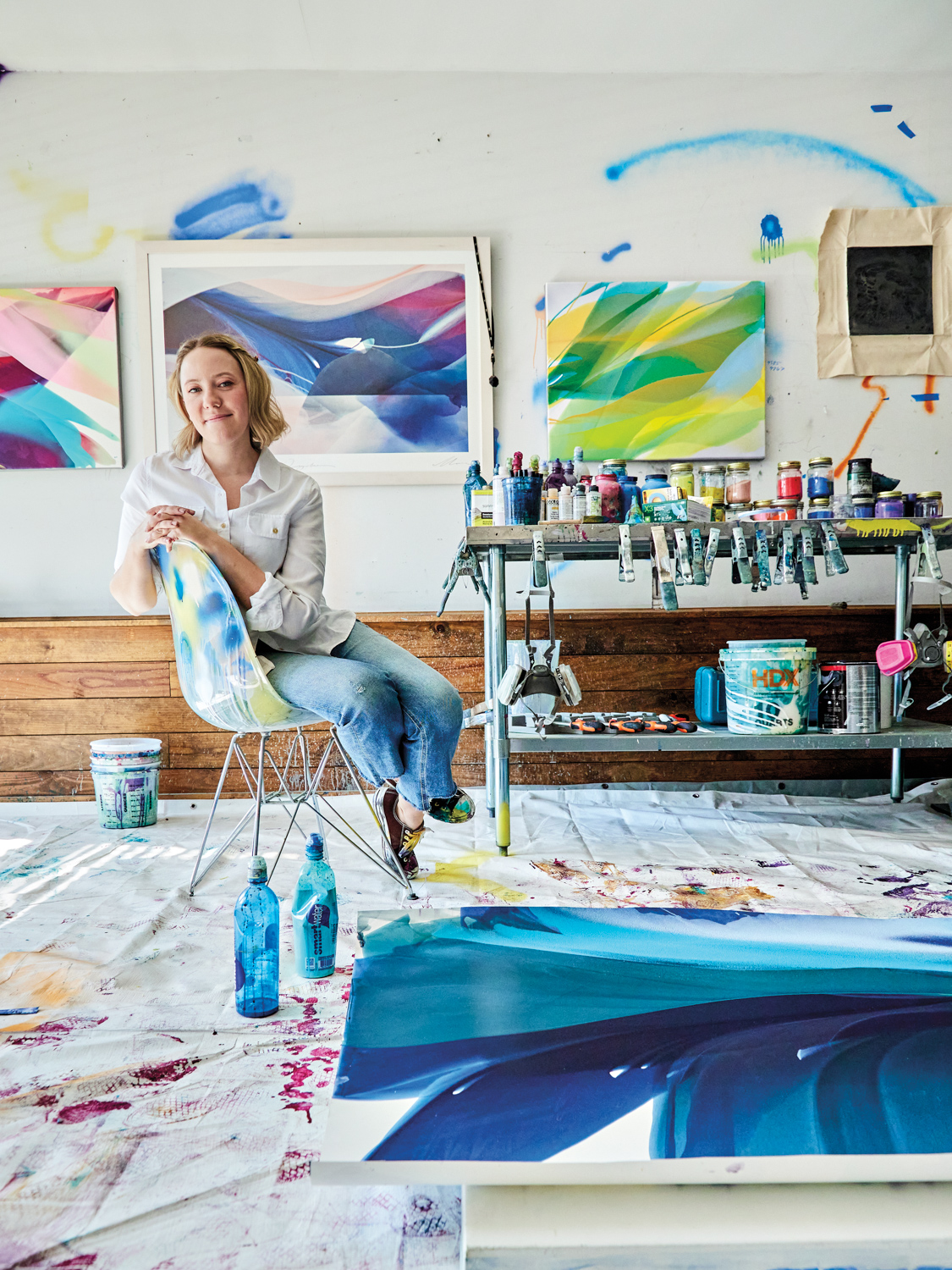 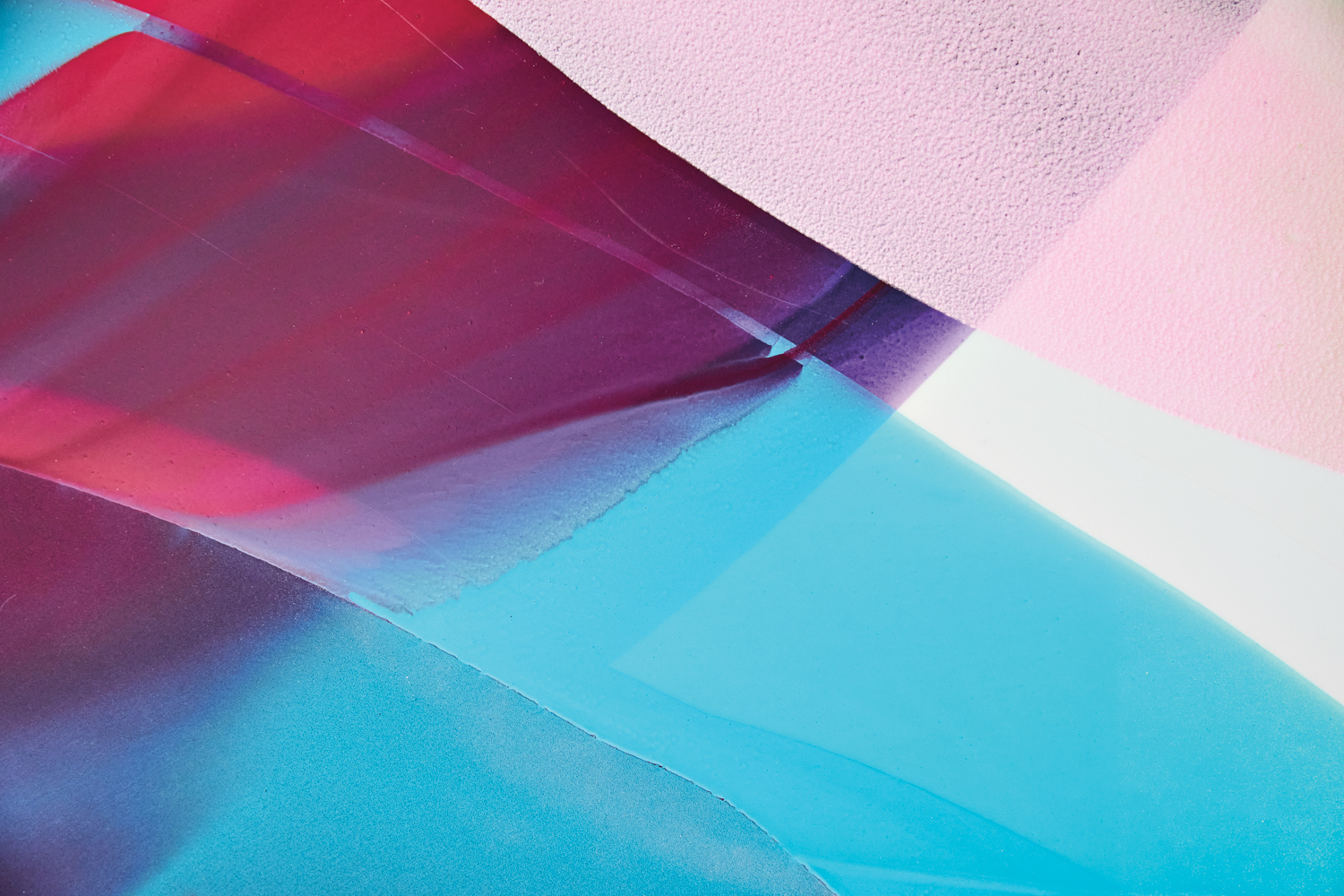 Many of Dunbar's recent pieces include sand, which gives the surface grit and dimension while alluding to the beauty of the artist's coastal surroundings.

Many of Dunbar's recent pieces include sand, which gives the surface grit and dimension while alluding to the beauty of the artist's coastal surroundings. 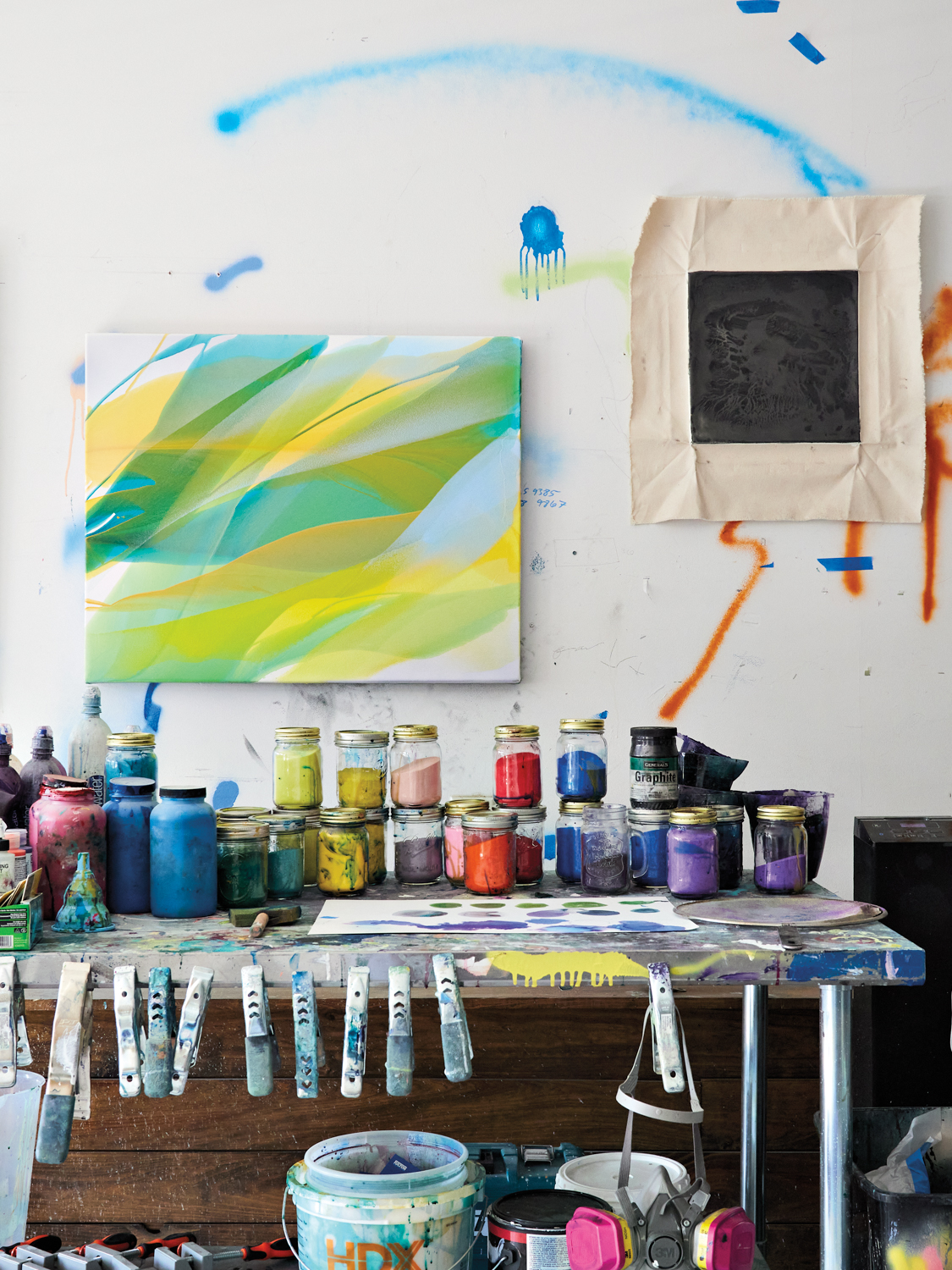 Dunbar's work table is lined with paint-smudged clothespins for air-drying works on paper.

Dunbar's work table is lined with paint-smudged clothespins for air-drying works on paper. 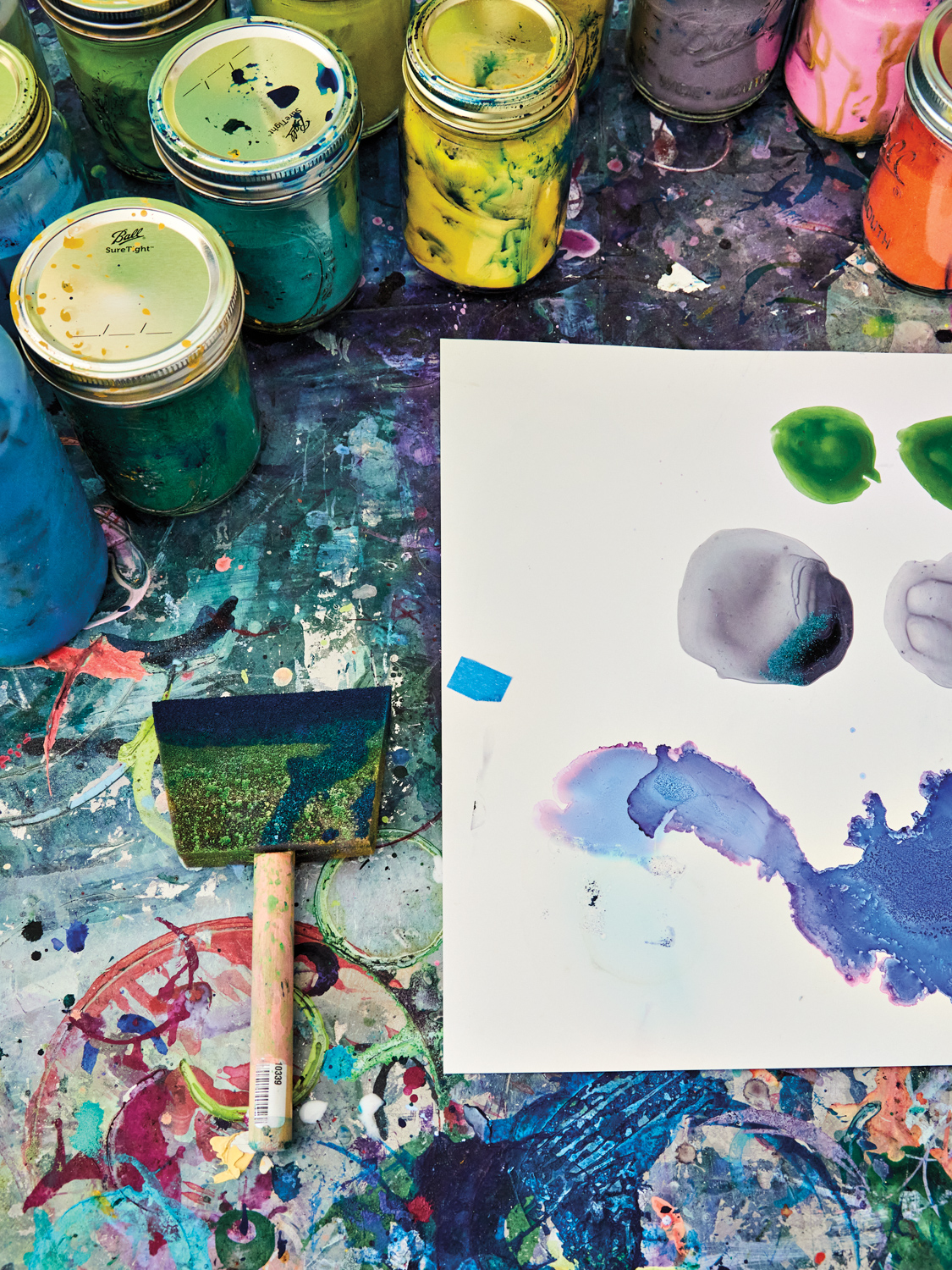 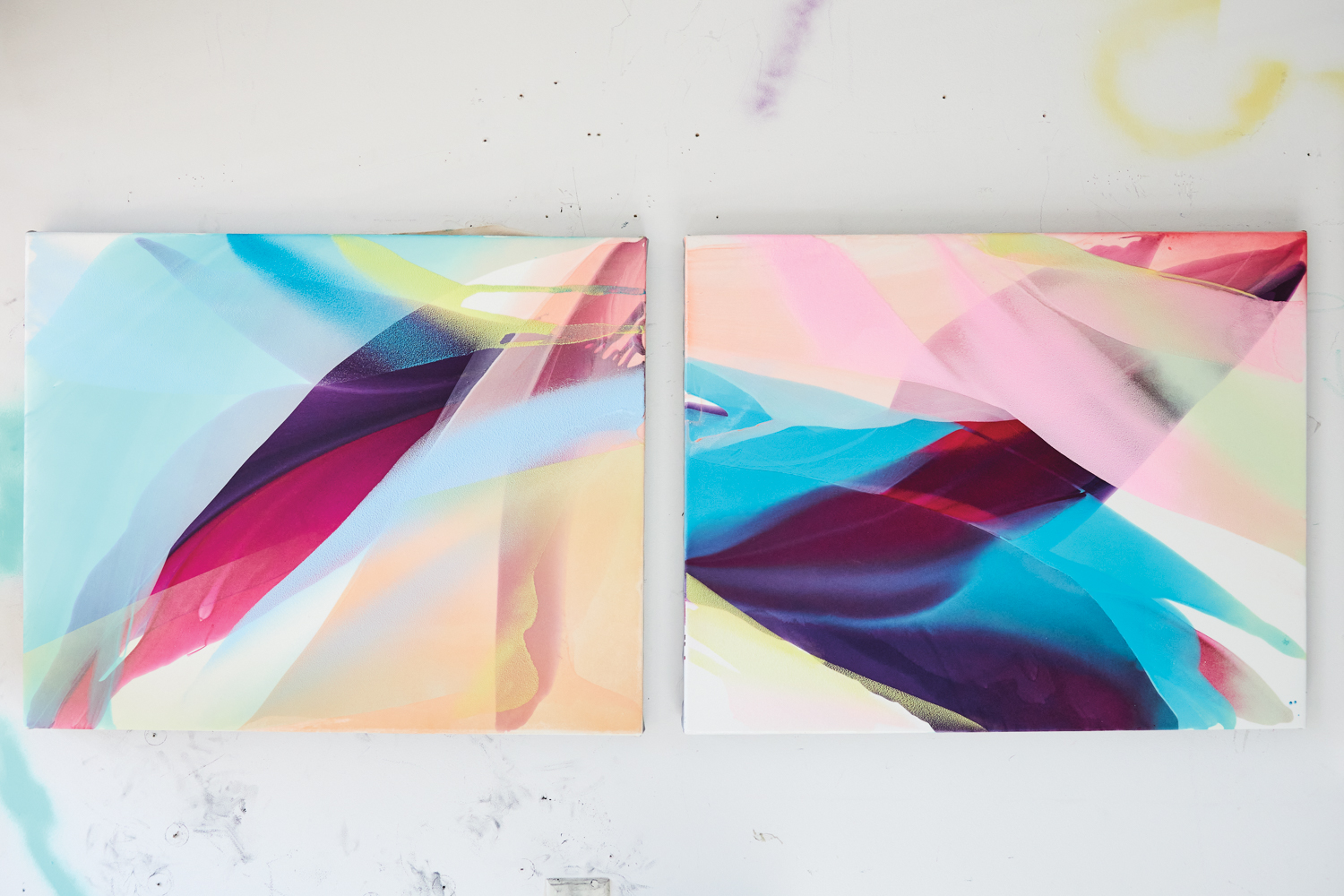 Dunbar’s practice is defined by her gravity-assisted abstracts on canvas.

Dunbar’s practice is defined by her gravity-assisted abstracts on canvas. 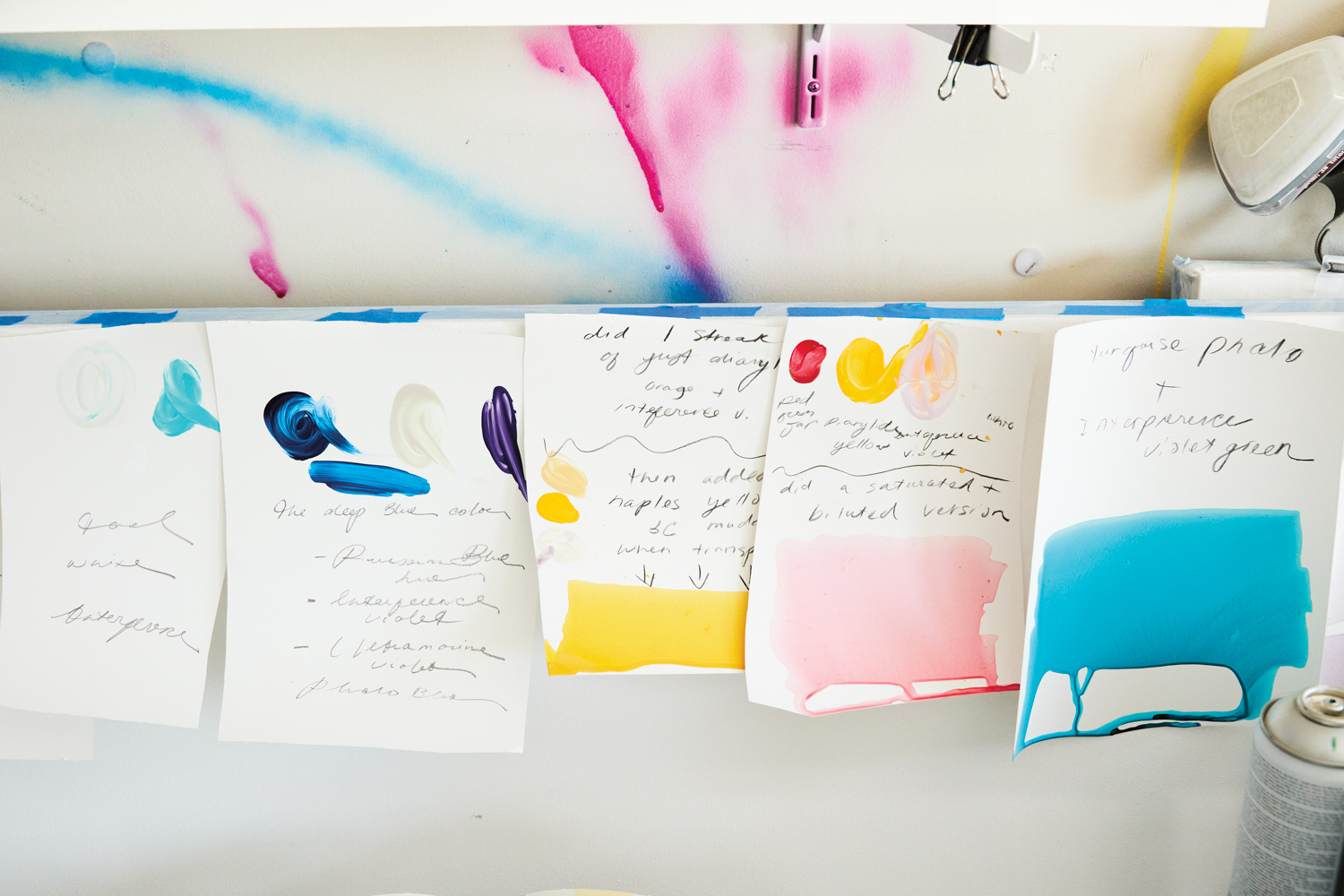 Leaves from a watercolor sketchbook, scrawled with notes and swiped with color, help her keep track of planned palettes for paintings.

Leaves from a watercolor sketchbook, scrawled with notes and swiped with color, help her keep track of planned palettes for paintings.

Born in Minsk, Belarus, Dunbar immigrated as a child to the U.S., later earning her Bachelor of Fine Arts from Georgia’s Columbus State University. Her studio practice in Charleston matured out of a 1955 brick building north of downtown, nabbing the attention of art arbiters across the country: their galleries including Spalding Nix Fine Art in Atlanta, Laura Rathe Fine Art in Houston and Dallas, and Samuel Owen Gallery in Greenwich, Connecticut.

Dunbar likens her work to nature-inspired abstraction. Each painting exudes a gossamer quality, her canvases layered with diaphanous washes of color that she manipulates, but in a hands-off way. “I bend the canvases so that the paint moves with gravity,” she explains. It’s a careful balance of intention and ideation, giving space to spontaneity. The artist’s media of choice are water-based paints and inks, frequently paired with spray paint. Recently, she began incorporating sand, a vestige of the coast, which adds texture and movement to the composition. “My process is rooted in experimentation and discovering new materials, or new ways of using them,” reveals the artist. Lately, Dunbar has been exploring sculpture and experiential work, including an augmented reality project that transforms one of her paintings into an animated murmuration of starlings.

Perhaps counterintuitively for an artist on the rise, Dunbar is “slowing down” her process, working on multiple paintings at once and documenting them as she goes. “A slower pace lets me consider if there’s value to adding more,” she explains. More time with the pieces—and more space to create them, pending a new Hollywood, South Carolina, studio—helps her bear witness to her own evolution, as well. “That’s the great benefit of making art; it’s a self-discovery process. You learn what makes you stay open and keep going,” she adds. “My best paintings happen when there’s no specific plan.” 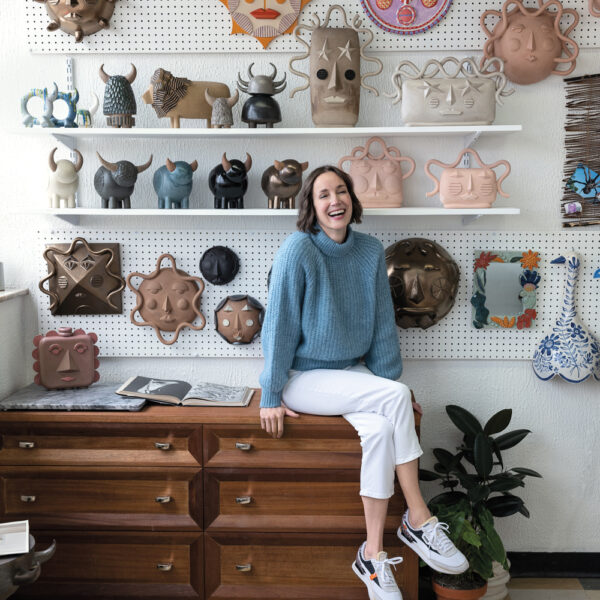 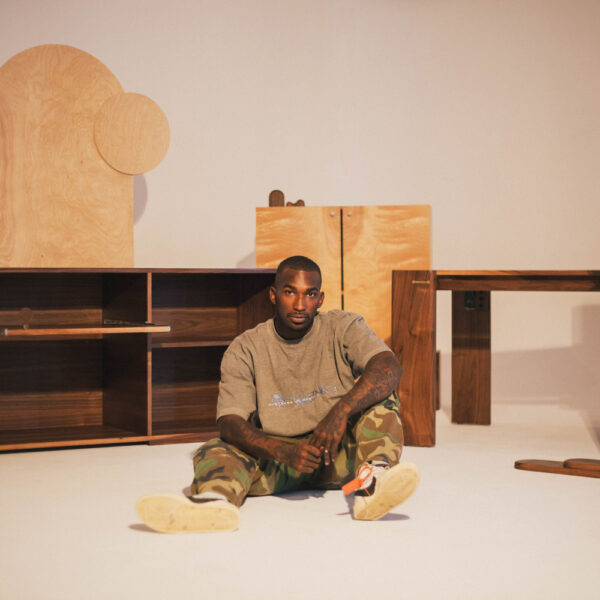 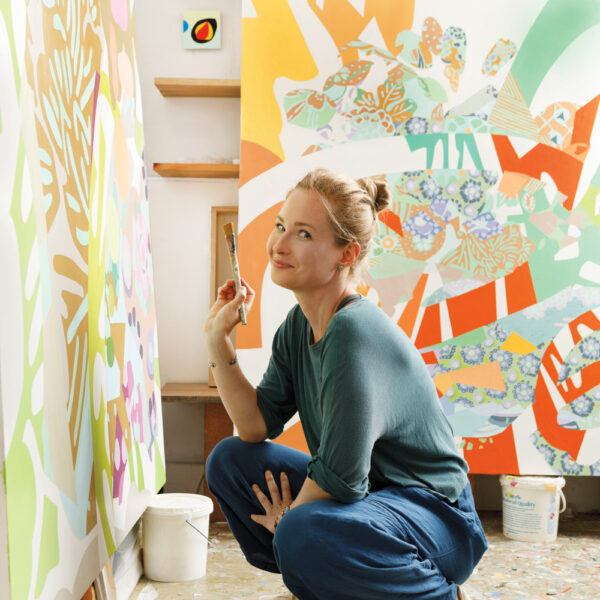 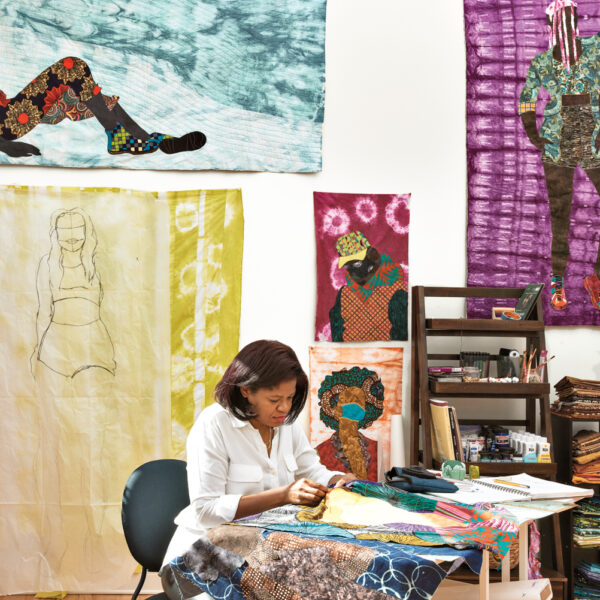