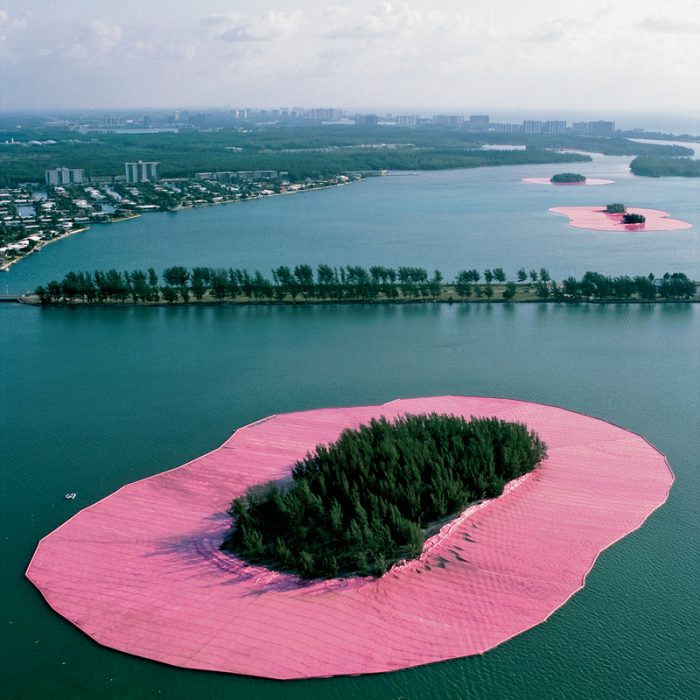 The color pink–baby, bubblegum and hot–is linked to Miami in many ways: through the Art Deco buildings of Miami Beach that were swathed in pastel paint during the mid 1970s; via an architecturally significant house and the predominant palette worn on a wildly popular TV series.

Most shockingly and short-lived, though, was in 1980 when the married couple/artist duo Christo and Jeanne-Claude announced their intention of wrapping 6.5 million square feet of floating pink propylene fabric around 11 uninhabited islands in Biscayne Bay. Why? Well, it would be art.

For a magical two weeks in May of 1983, a wondrous sight sparkled under sunny turquoise skies. Islands of lush green foliage encircled in glowing pink fabric didn’t appear incongruous at all. They almost seemed to vibrate in the bay. Ultimately, Miamians gained a new appreciation for their surroundings, and the rest of the world began to view the city in a different light.

Sadly, Jeanne-Claude passed away in 2009, but Christo, now 83, is still active. His most recent installation was in London’s Hyde Park, featuring 7,500 oil barrels stacked and floating in a lake. Anything but dull, they were painted in eye-popping red, blue … and pink!