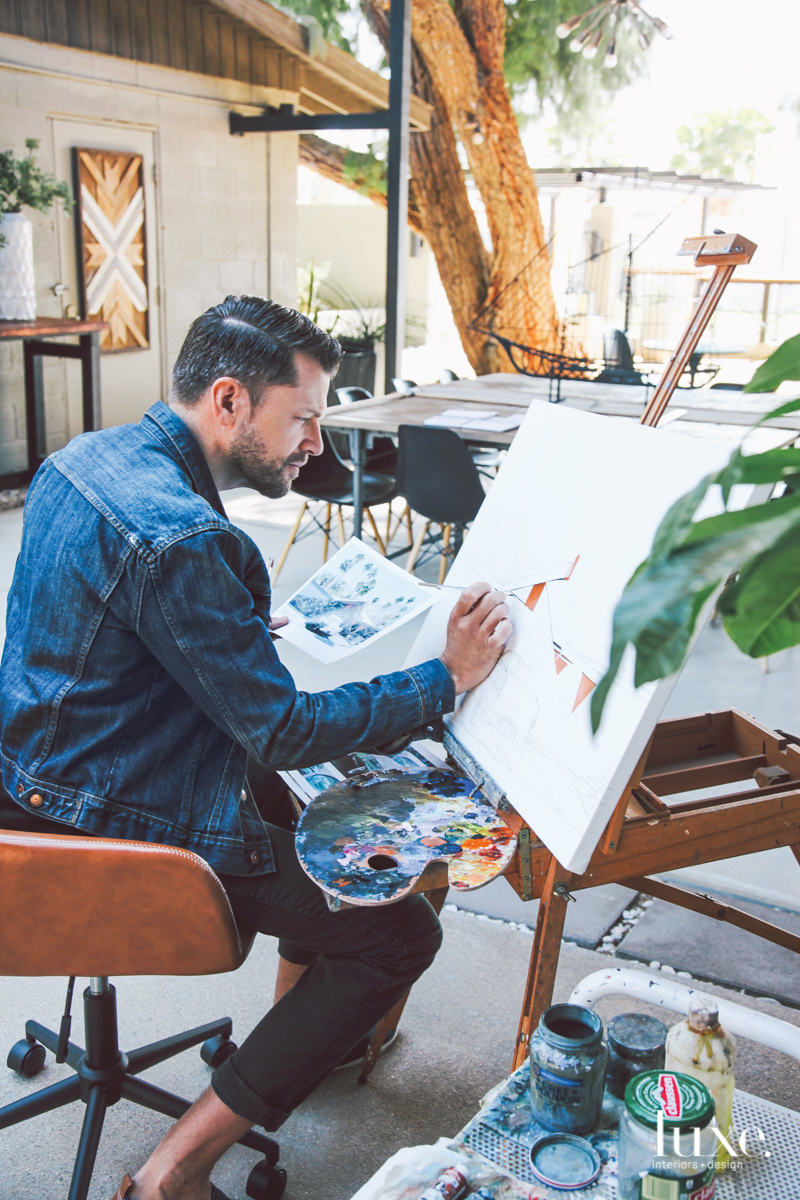 Artist Danny Heller lives and paints in a studio at the Lautner Compound outside Palm Springs.

Painter Danny Heller can’t remember a time when art wasn’t part of his life. “It was just always in me,” he says. “I was always drawn to art and creating things–I drew the world around me.” In his early years, that world was suburban L.A.–Northridge, to be exact. “I grew up around the sun, palm trees and midcentury culture,” says Heller. He’s quick to emphasize, though, that what spoke to him were the modest postwar ranch homes that dotted the Valley of his youth. “I think I was initially–and still am–drawn to how humble and livable the common midcentury tract house is. High design was brought to the masses by developers like Joseph Eichler and George and Robert Alexander and the idea that everyone should benefit from a better life that innovative modern architecture would provide” he explains. “As a kid who was typically surrounded by stucco boxes, seeing something dynamic and full of light and glass and soaring beams really got my heart racing and my imagination fired up.”

Heller’s passion for midcentury structures continues. While he has documented some grand examples, like the LAX Theme Building and the TWA Flight Center at JFK Airport, quieter moments from the era still resonate with him. These days, Palm Springs’ modernist architecture inspires much of his work. He fell in love with the design mecca–as well as with his wife–and moved to the area from L.A. five years ago. Now he can be found along the city’s streets, snapping photos of houses, which he uses as a jumping off point for his work. “I couldn’t set up my easel in front of someone’s house,” he jokes. “I carry my camera with me at all times.” It’s important for him to visit the sites and take the shots himself. “I can see how the light changes as opposed to working from someone else’s photos,” he says. The paintings evolve from these snapshots to drawings on canvas, to the finished work which Heller completes in layers of oils for richness. 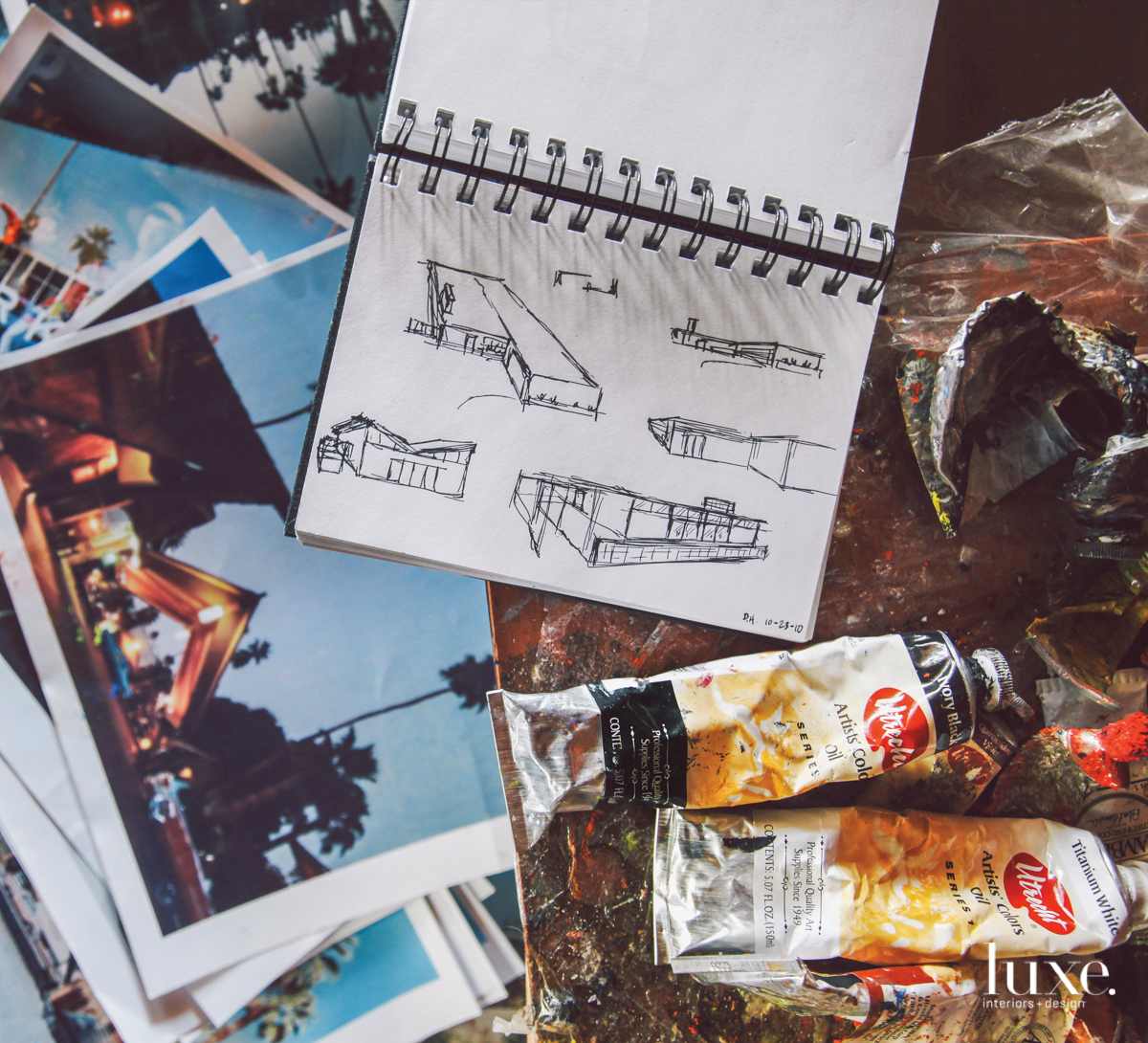 Painter Danny Heller's photos are critical to his process, since they capture the way light hits his subjects.

Painter Danny Heller's photos are critical to his process, since they capture the way light hits his subjects. 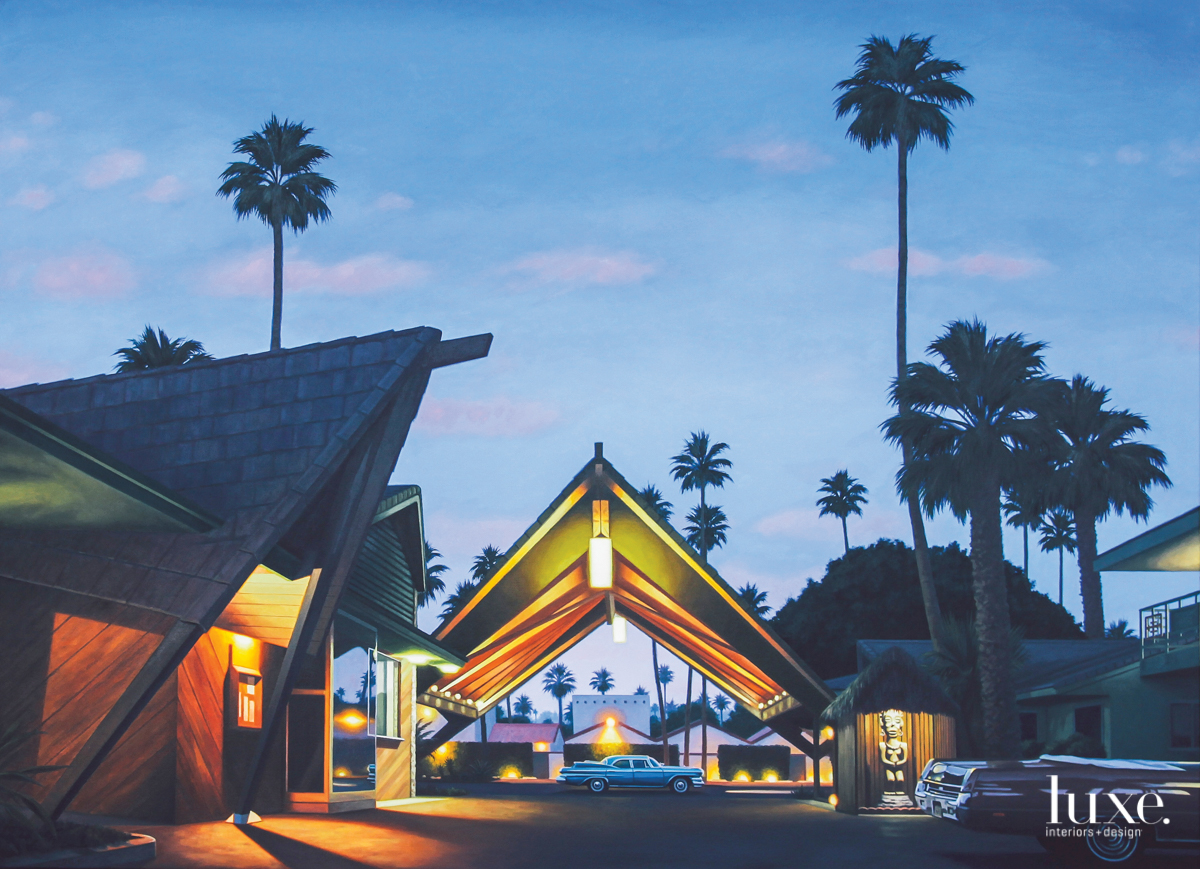 One of Heller's paintings in his latest series exploring midcentury Tiki style.

One of Heller's paintings in his latest series exploring midcentury Tiki style. 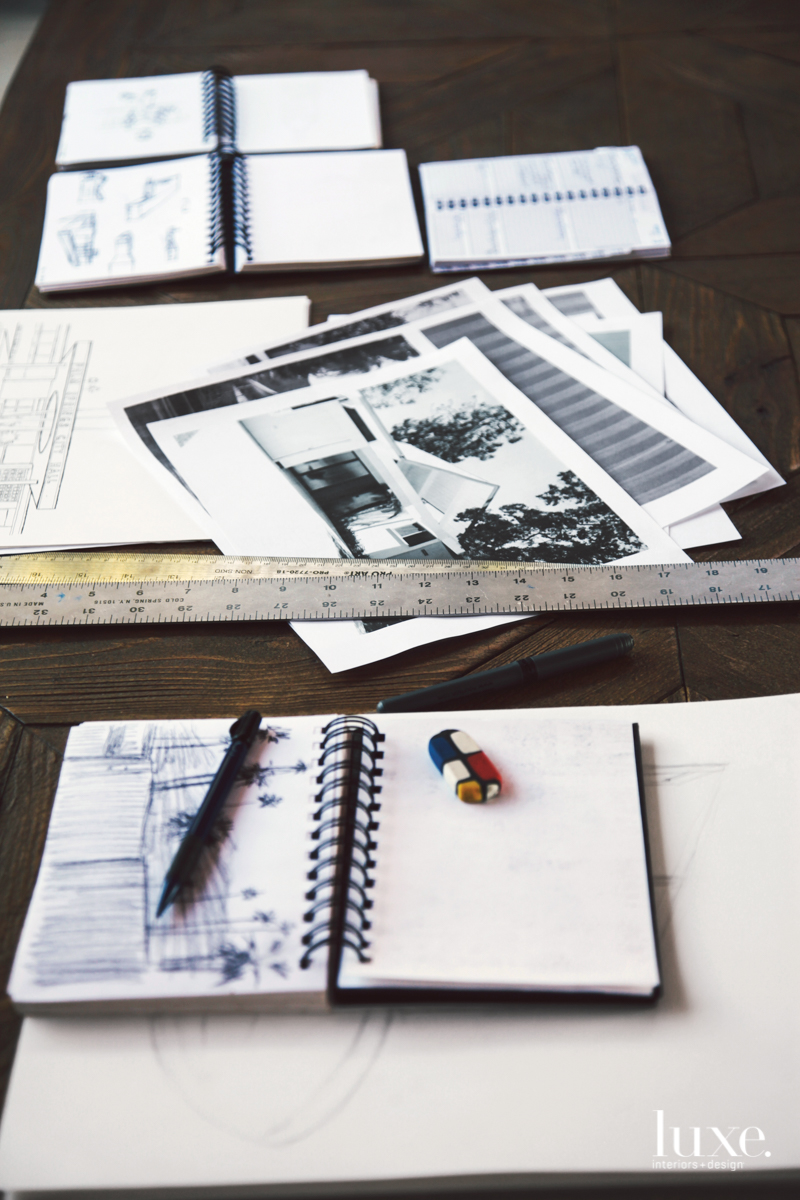 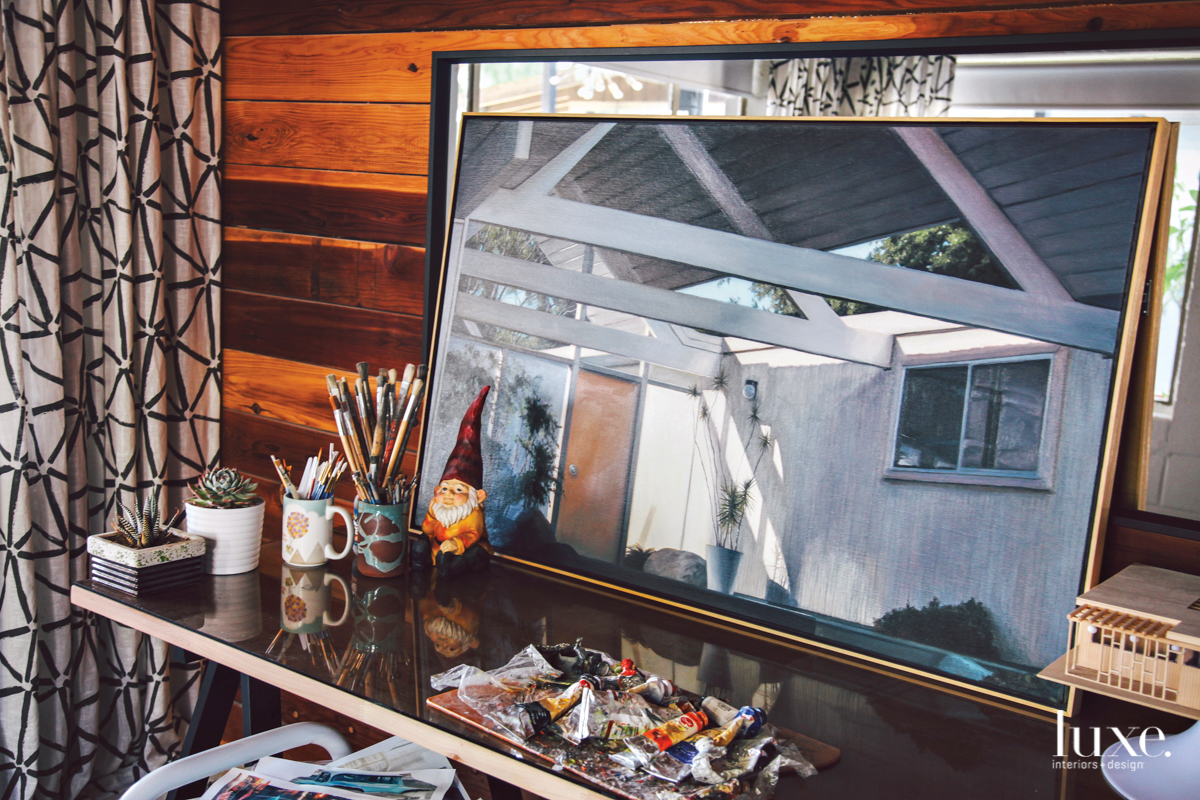 Danny Heller's desktop includes the tools of his craft along with a finished painting.

Danny Heller's desktop includes the tools of his craft along with a finished painting. 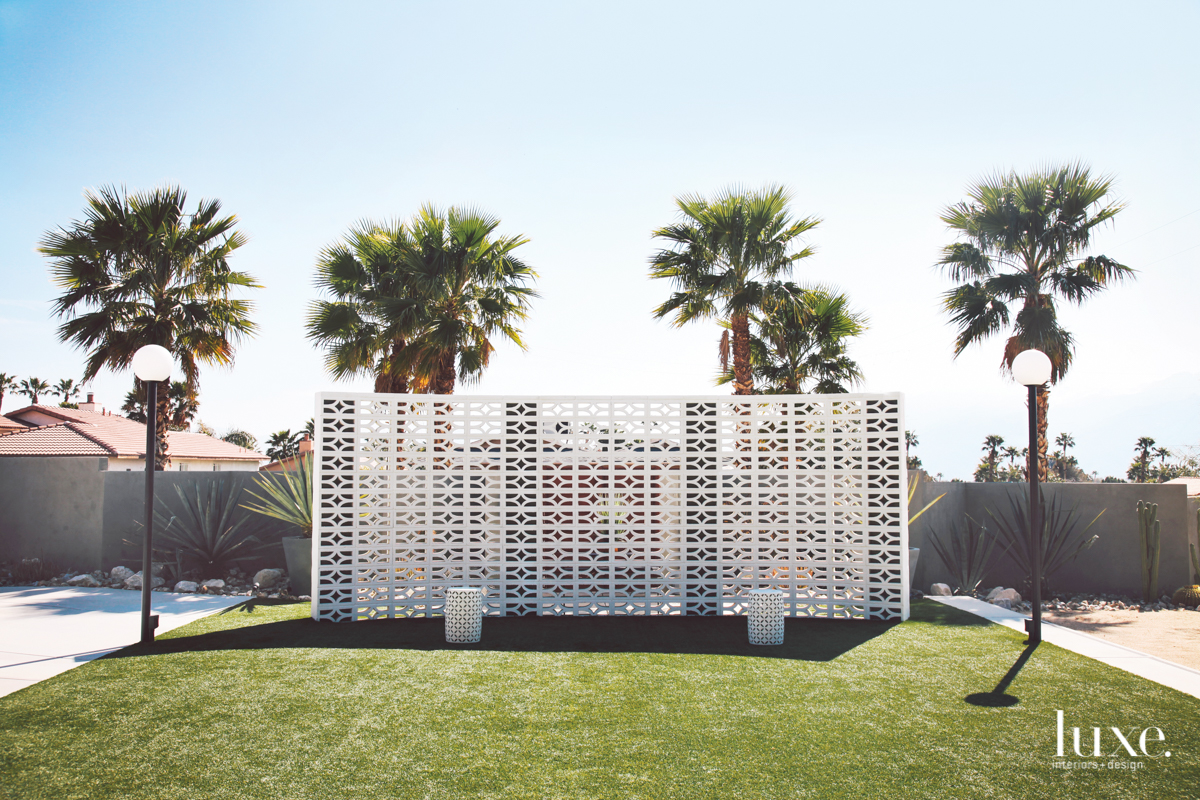 A fierce advocate, Heller walks the walk, speaking in favor of preservation. His wife is the co-owner of the Lautner Compound, which includes buildings by the famed architect John Lautner.

A fierce advocate, Heller walks the walk, speaking in favor of preservation. His wife is the co-owner of the Lautner Compound, which includes buildings by the famed architect John Lautner.

For his latest canvases, the artist set his sights on another quintessential aspect of 20th-century design: tiki style. Opening in May at George Billis Gallery in L.A., Heller’s show “Tiki Modern” highlights architecture and design found around Southern California, from 1960s Polynesian-themed hotels and bars to Hawaiian-style condos. “Tiki style was a facet of the midcentury aesthetic, so I thought it would be a good extension of my usual modernism-focused work,” Heller says.

Ultimately, Heller sees his paintings as a way to remind viewers of the relevance of midcentury design. “It’s important,” he says. “It communicated optimism. It was uplifting. We need some of that today.” And the artist walks the walk: He’s active in the Palm Springs Preservation Foundation and is a frequent advocate at city hall. “A lot of people don’t understand the movement,” he notes. “There’s always a threat of great midcentury architecture being demolished. I want to share why we need to build an appreciation for it.”