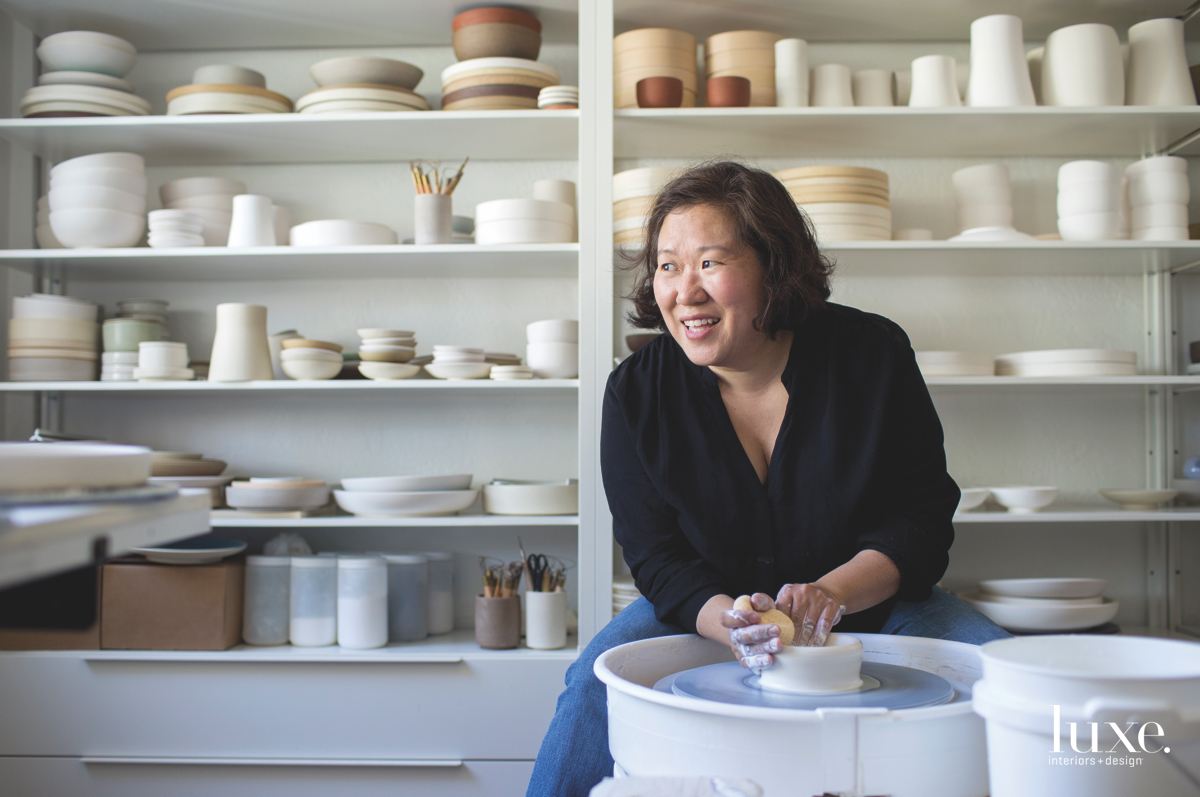 From her Phoenix studio, Miro Chun makes tableware in clay and porcelain for her line of ceramics, Miro Made This.

Having worked as an architect for 15 years before becoming a full-time ceramicist, Miro Chun has learned to accept the variables that come with making something by hand. Materials vary from batch to batch, and precisely reproducing kiln conditions is next to impossible; even shifts in humidity and weather can alter the outcome. “It’s about making things that are supposed to be the same and then being okay with the differences that occur,” she explains of the mindset behind her work. “I’m definitely a perfectionist, so learning to be okay with the wabi-sabi that happens has been interesting.”

Chun didn’t intend to change careers. She enrolled in ceramics classes at a community college 10 years ago and was soon delving deeply into creating tableware that is at once functional and tactile. In 2014, she officially launched her ceramics firm, Miro Made This.

Today, the shelves of Chun’s Phoenix studio display her stripped-back porcelain and stoneware plates, bowls, cups and carafes. The forms are done in organic tones, from eggshell white to a rich earthy rust, with the interiors sometimes glazed in arresting hues–blue-green, charcoal, apricot. Stripped of all ornament, with nary a handle in sight, the pieces are pleasingly human-scaled. Of her oatmeal bowls, Chun says, “The slight curvature emphasizes the way you want to cup something tasty that you’re about to consume.” Not only are they meant to be used, but also the impact of that use–the stains, the gradual wearing away of rough surfaces–amplifies their appeal. 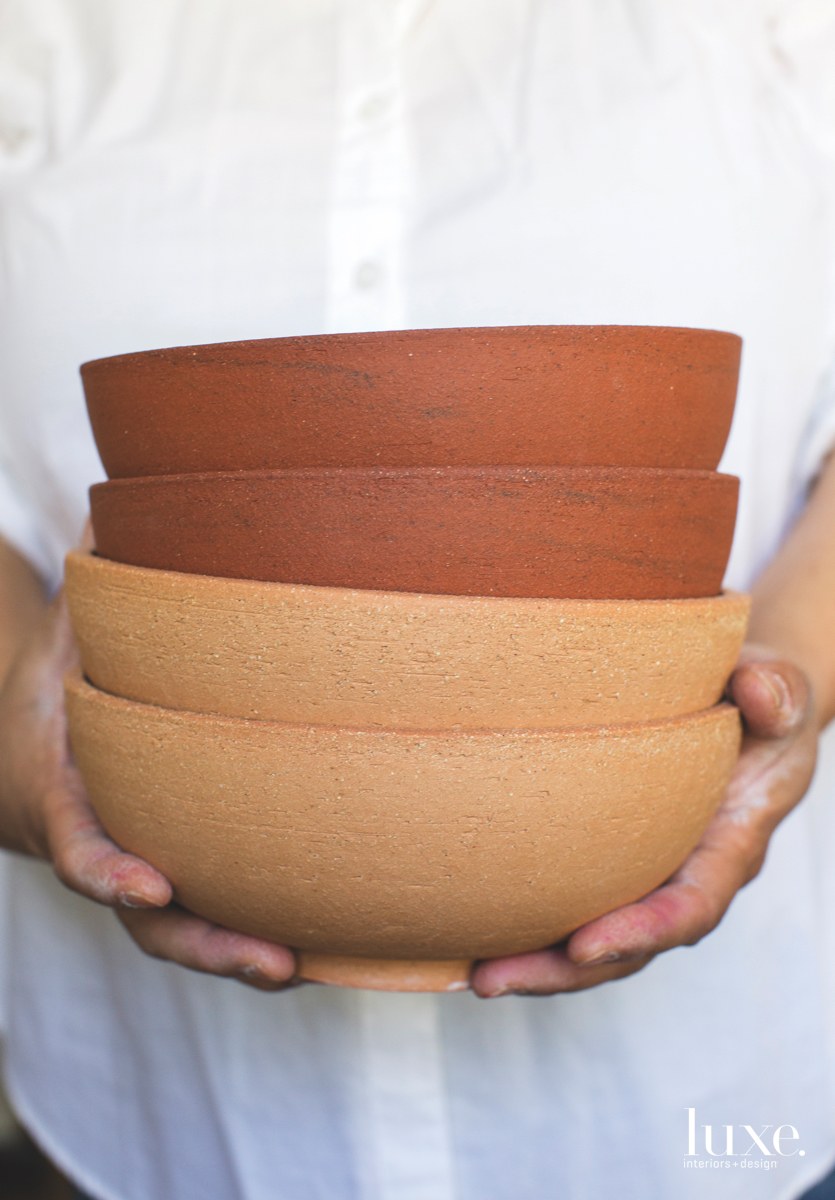 Miro Made This is a small, handmade ceramics company focused on minimalist, functional tableware.

Miro Made This is a small, handmade ceramics company focused on minimalist, functional tableware. 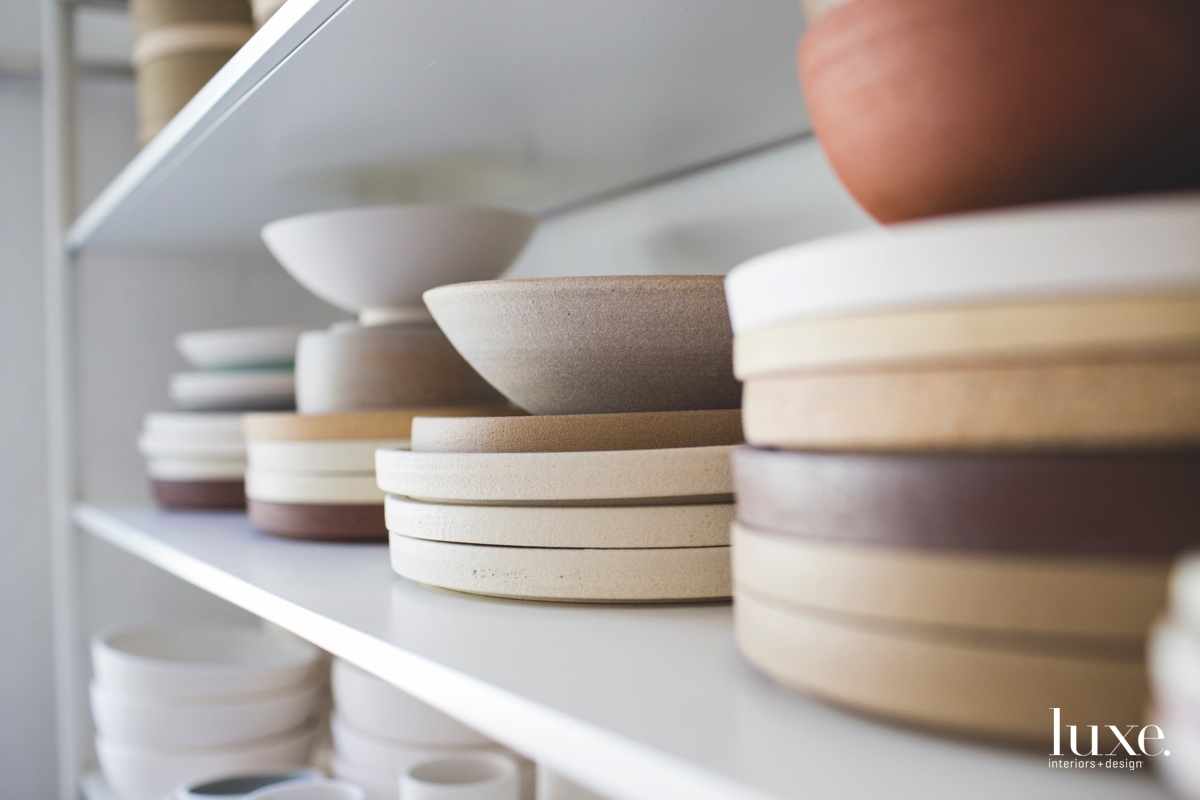 The artist holds a set of Udon bowls.

The artist holds a set of Udon bowls. 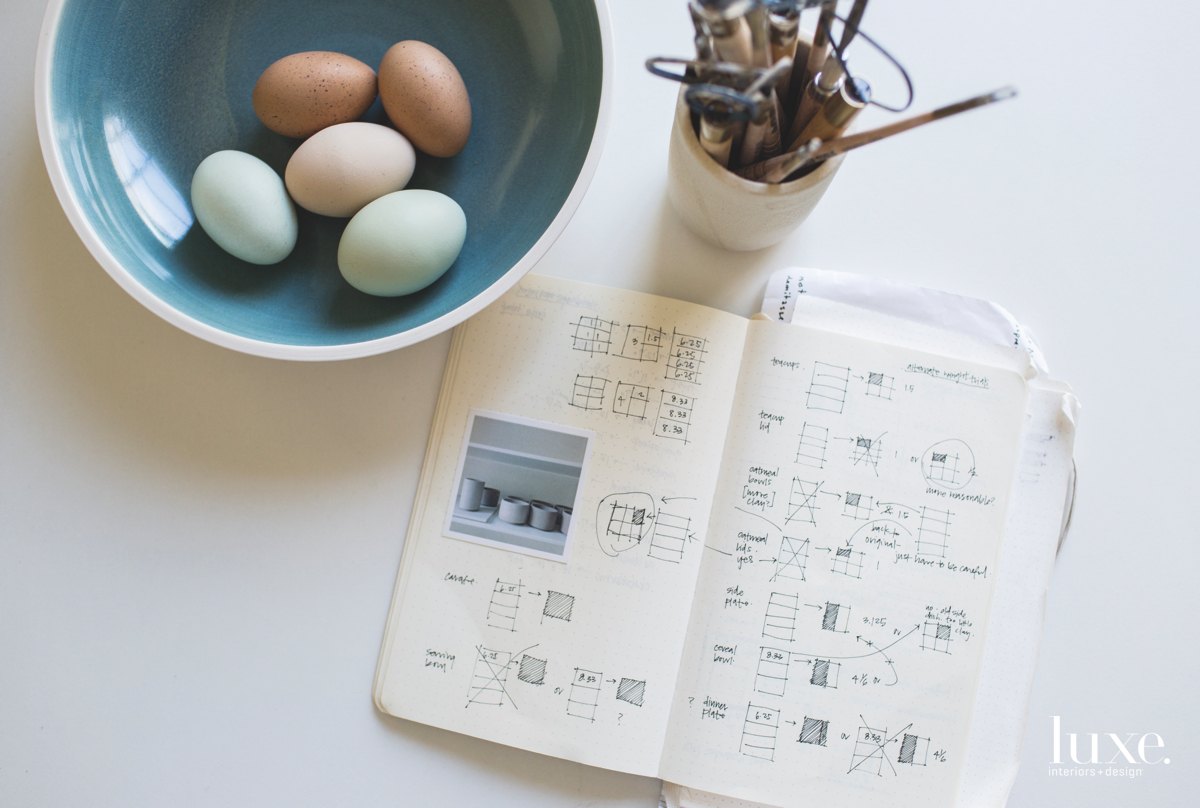 The shelves of her studio hold a rotating selection of ceramics.

The shelves of her studio hold a rotating selection of ceramics. 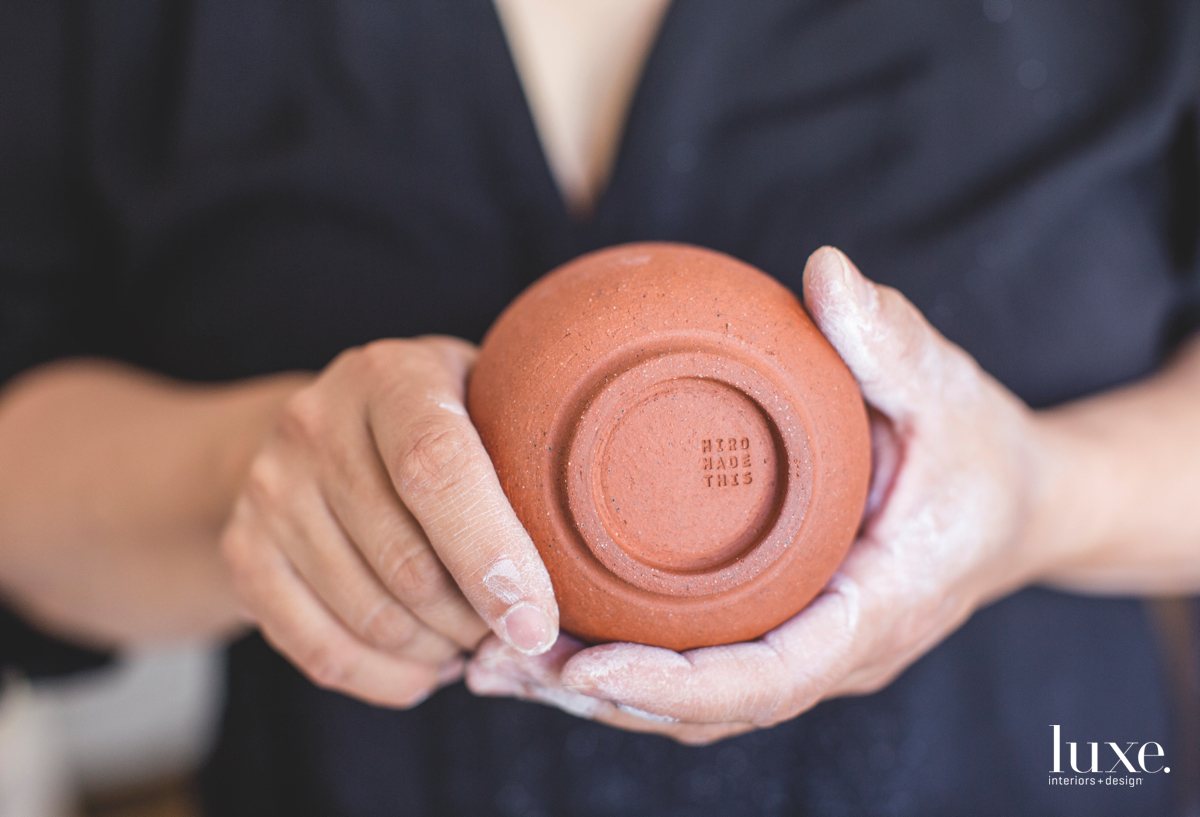 Drawings in a sketchbook help her calculate the amount of clay needed for upcoming projects.

Drawings in a sketchbook help her calculate the amount of clay needed for upcoming projects. 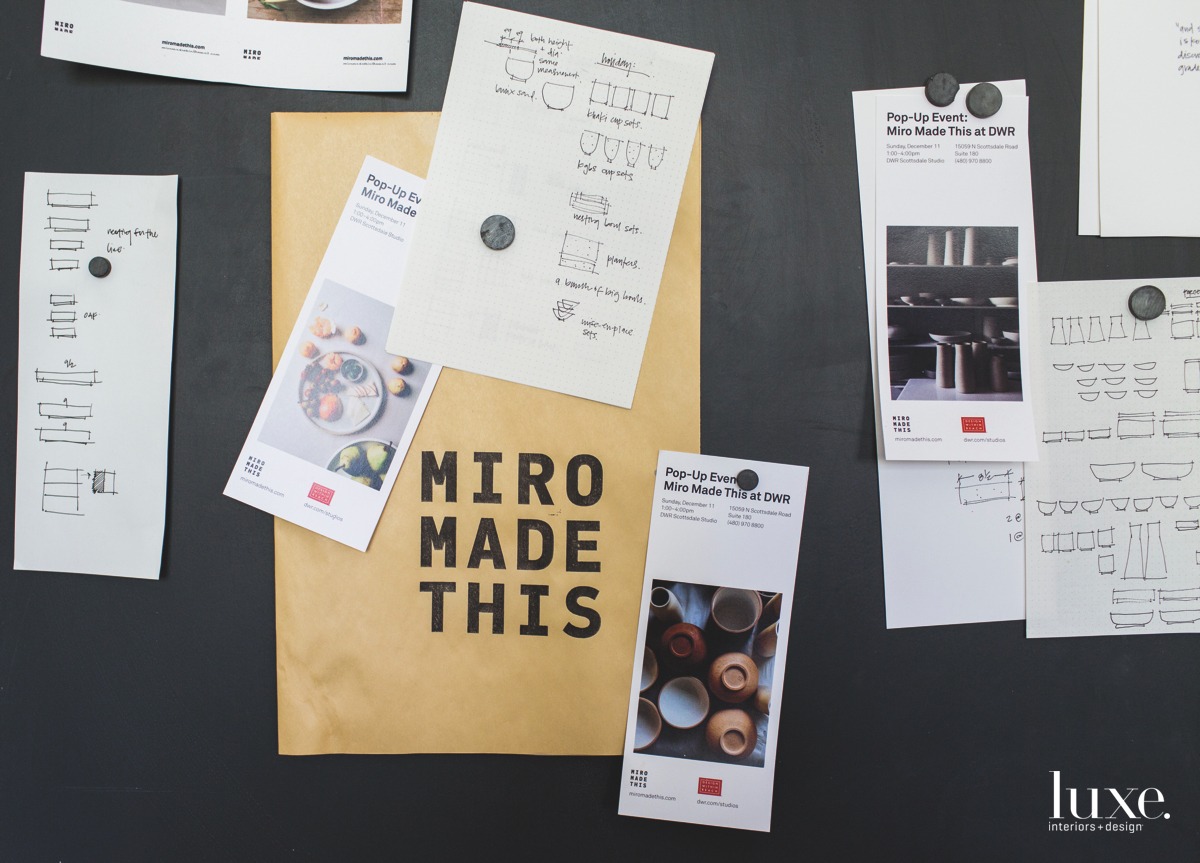 Here pieces display the logo of her shop, Miro Made This.

Here pieces display the logo of her shop, Miro Made This. 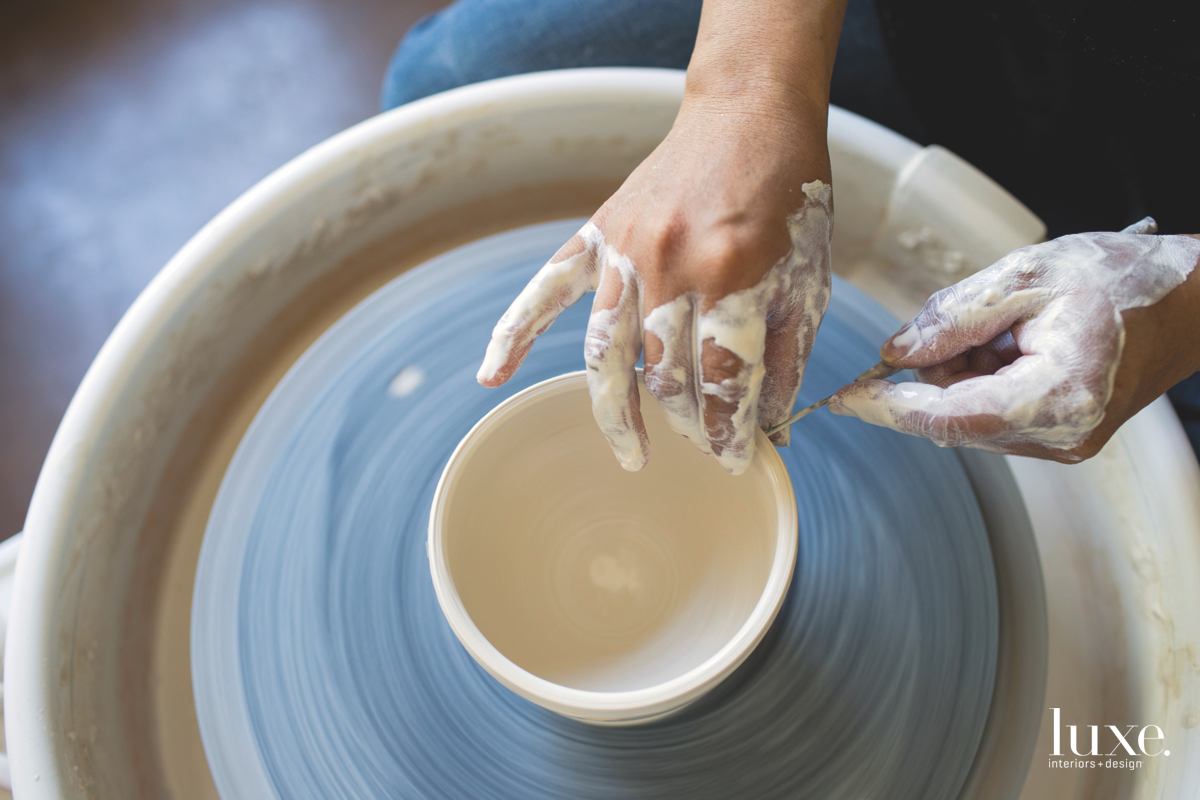 On a blackboard in Chun's studio, sketches accompany postcards for a pop-up sale the artist hosted at Design Within Reach in Scottsdale.

On a blackboard in Chun's studio, sketches accompany postcards for a pop-up sale the artist hosted at Design Within Reach in Scottsdale. 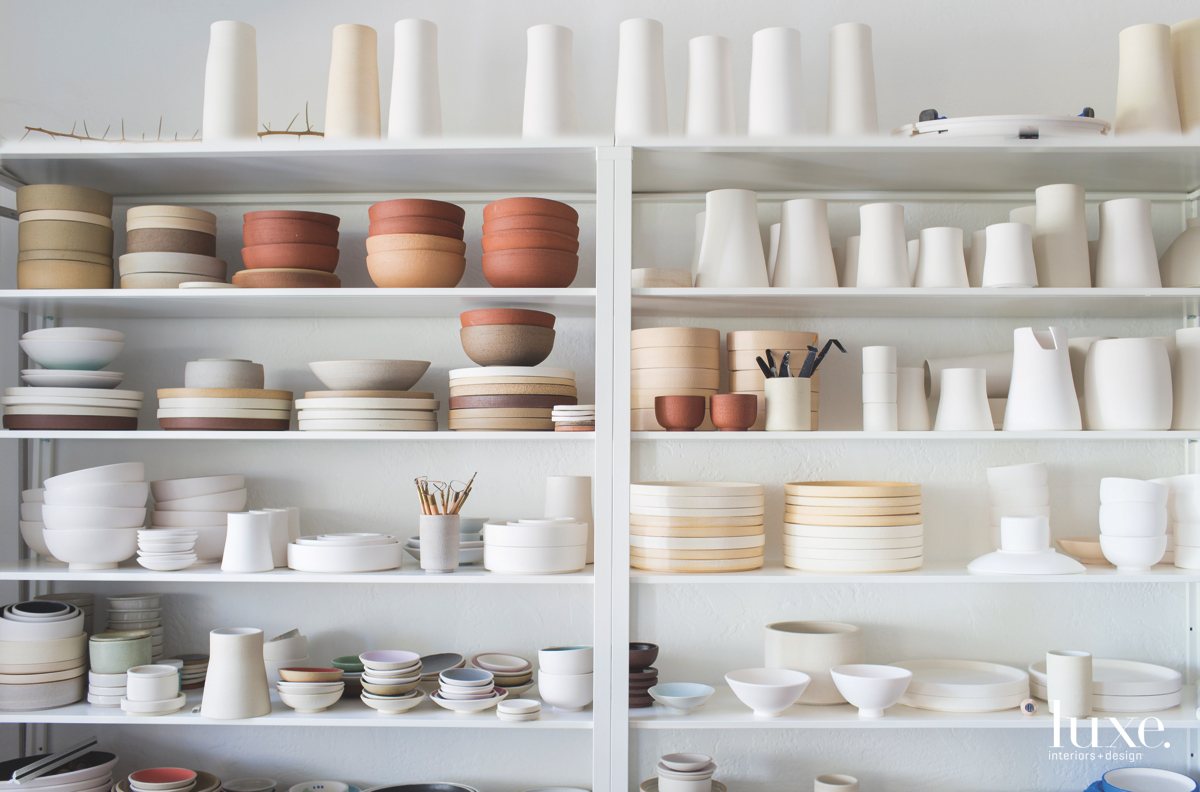 Chun embraces the natural irregularities that come with making each piece by hand.

Chun embraces the natural irregularities that come with making each piece by hand.

Inspiration for each piece often starts at the dining table or in the kitchen. “I’ll be using something I’ve made and think, ‘Maybe this would work better if it were deeper or more shallow,’ or, ‘Maybe if I had a stack of little bowls in a similar shape, they could hold herbs,’ ” Chun says. Others are the result of serendipity: “An extra ball of clay that hasn’t been earmarked for something specific turns into a one-off piece,” she says. The object will then “live” with the artist until she decides on its next iteration.

Art has always been an integral part of life for Chun, who was named for the Spanish painter Joan Miro. Her mother, Changsoon Oh, is an abstract artist, and her sister, Mimi O Chun, is also an artist as well as a designer. Unsurprisingly, the sisters were immersed in creativity while growing up in eastern Pennsylvania, where their parents, both from Seoul, South Korea, lived after attending graduate school in the States. “If my sister and I were playing with dolls, it was with dolls that my mother sewed,” Chun reflects. “We were always drawing, collaging and sewing.”

Recently, Chun embarked on a series of objects painted by her mother. “It’s a learning curve at both ends,” she says. “She’s getting used to painting on a curved surface in a new medium, and I’m considering what sort of forms and clay bodies would work well with what my mother paints.” The ceramicist has also begun a study she calls “Perfectly Imperfect,” through which she’s learning to embrace the pieces that didn’t turn out according to plan.

“Cooking, eating and the daily rituals that surround those activities are what my practice is centered on,” Chun says. “These small personal rituals consist of objects and interactions so commonplace that you don’t even think about them–but you’d miss them if they were gone.”