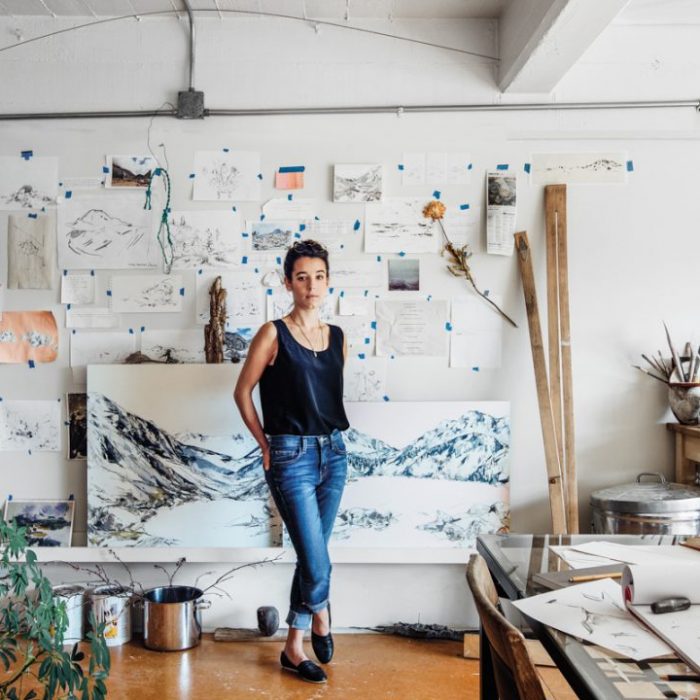 On Mya Kerner’s otherwise mundane commute home, following days of dreary winter skies, and two weeks after moving to Seattle from her native Philadelphia, “the clouds finally broke and the mountains came into view,” she recalls. “That was the first time I clearly saw the Pacific Northwest landscape.” In the area to study permaculture, she was in the process of learning how to comprehend the landscape in order to observe and adapt. “My perception and understanding began to change,” says the artist. “My paintings became a way to process all the new information I was receiving.” 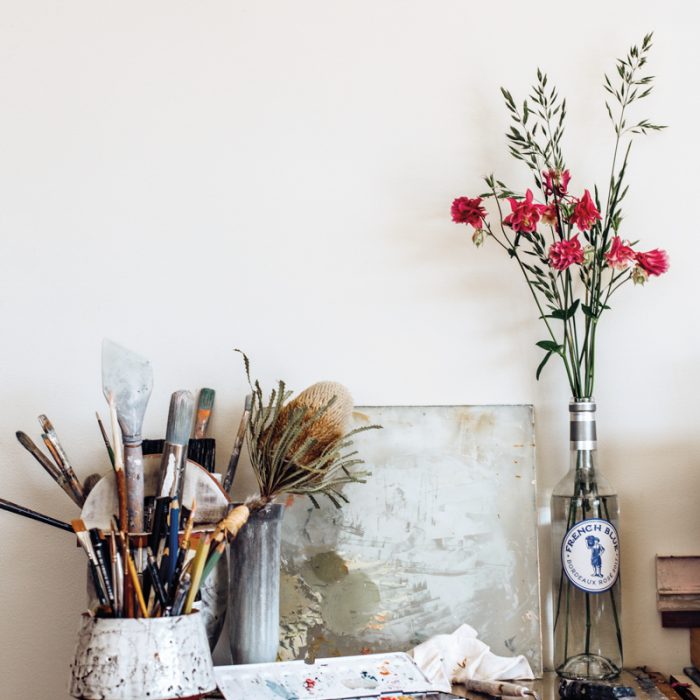 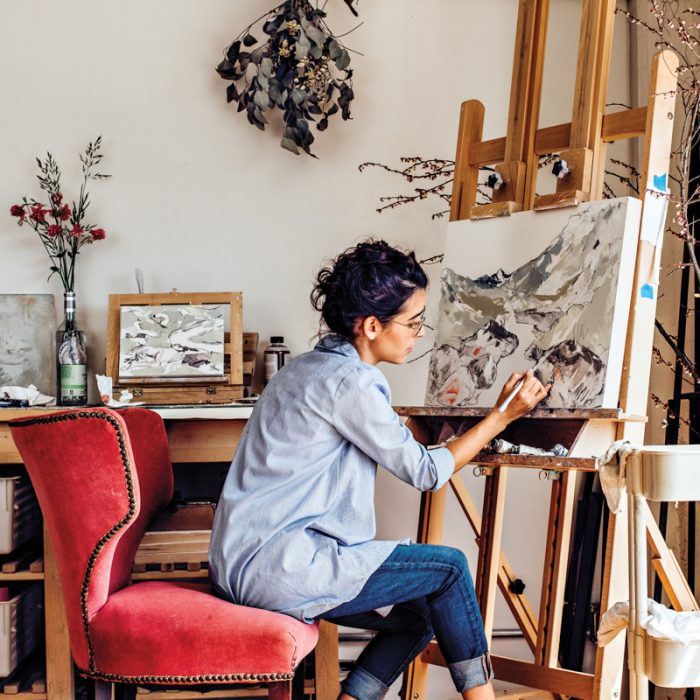 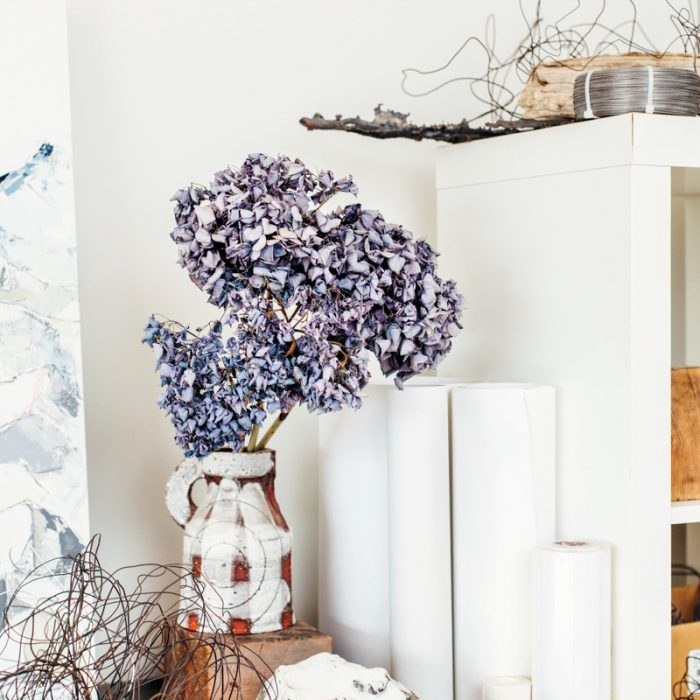 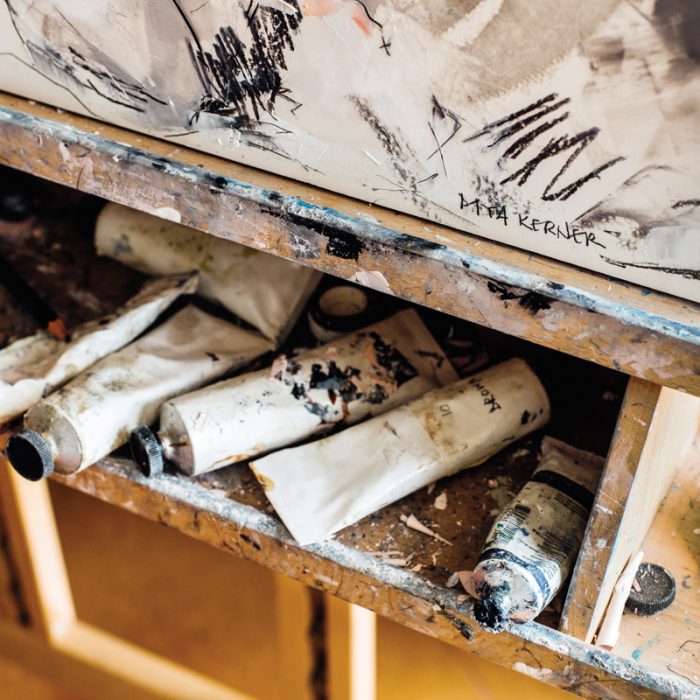 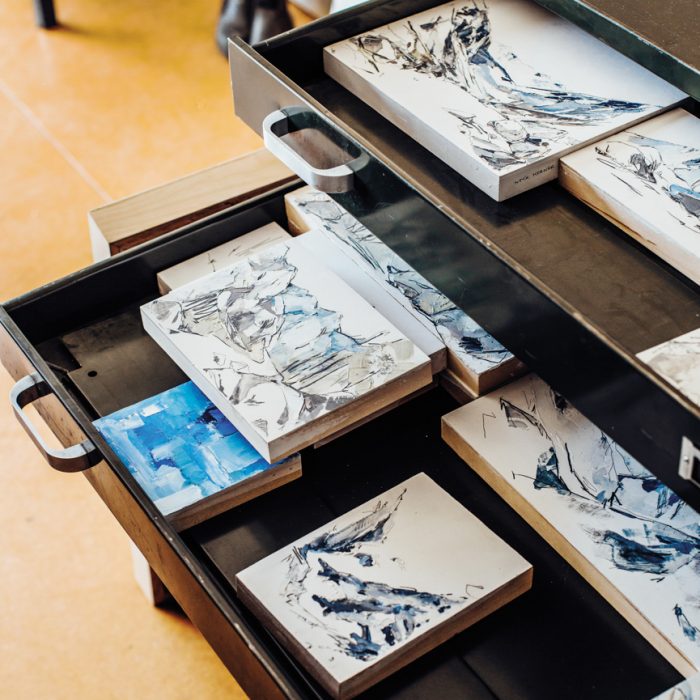 In her work, she both extols and dissects the language of mountain ranges with expressive lines and swaths of color. Her current practice begins outdoors, whether she’s sketching in the French Pyrenees or the North Cascades. Back in her studio, she develops more drawings and studies from her field sketches before painting the completed composition. “The final image is a process of abstraction,” notes the artist. Rather than true representation, “I am mostly interested in capturing the memory of the experience, which includes the energy of the landscape.”

Kerner conveys this topographical physicality through her oil paints. Instead of brushes, “I’m sculpting with spatulas and X-Acto knives,” she explains, adding and scraping away paint to diversify texture. “Then I interrupt and fragment these fields of color with zigzag lines of graphite.” Working on panels “allows me to use more force than on canvas,” she shares.

This frenetic line-work naturally evolved into the artist’s mountain sculptures–forms of wire bent to recreate the ancient energy of tectonic plates smashing together–highlighting effects of the forces of nature on the mountain over time. In her installation “Filaments XII,” commissioned by JW Architects, “the sculpture changes based on your movements, just like the mountains change form as you move” says Kerner. “It first seems like a nest of wire hanging above you. Then, as you walk up the stairs, the image becomes clear.”

Her overall perspective has also expanded beyond that moment of sublime. “You can’t make relevant landscape art today without having some sense of ecological crisis,” she notes. At her show this past spring at Linda Hodges Gallery, the humble rocks that have fallen from the mountains took center stage, and it’s an idea she’ll expand further during her next show there in January. “I’ve started to pay attention to what’s happening at the human level when we’re spending so much time idealizing these images of grandeur,” explains Kerner. Instead of recreating nature as separate objects of beauty, “I want my work to remind people that nature is within us as well. We all have our feet on the same earth.”